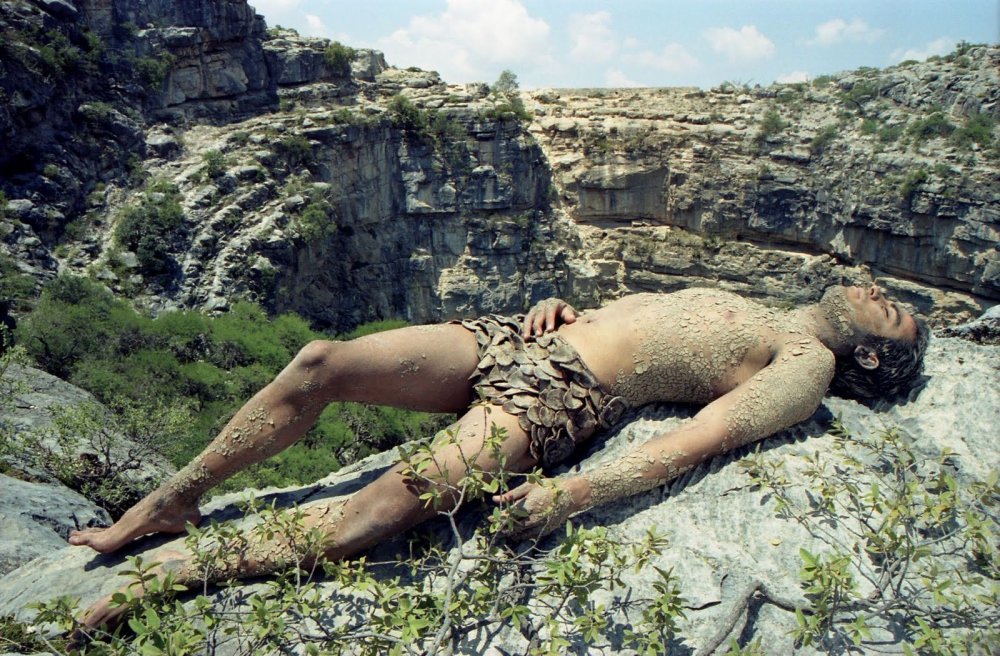 Each of the films that make up Julian Hernandez’s trilogy – A Thousand Clouds of Peace (2004), Broken Sky (2006) and now Raging Sun, Raging Sky (2009) – won a Teddy Award at its respective Berlinale premiere. These honours recognise distinctive films that represent gay experience as part of human experience. For instance, in Raging Sun, Raging Sky there is a joyous mythical heterosexual encounter prologue that sets the tone for how the three young male protagonists will later intersect. Ironically, it is just such a commonality of ground, along with Hernandez’s determinedly sinuous visual technique, that may explain why these extraordinary films have not yet gotten the attention from mainstream movie culture that they deserve. Hernandez’s trilogy constitutes some of the most unique and formally refined cinema yet seen from Latin America. It is also among the boldest and most accomplished on the current scene. His achievement ought to readjust popular perception of Mexican cinema, as it resists categorisation in the gay or queer cinema ghetto.

Raging Sun, Raging Sky is composed of two parts: a ‘realistic’ two hours is followed by a highly symbolic, myth-oriented final hour. (Both mix monochrome and colour footage.) This latter exploration of gender issues and reflection on Aztec culture is kept within contemporary sensual / spiritual experience by Hernandez’s formal experimentation.

Ryo (Guillermo Villegas), Tari (Javier Olivan) and Kieri (Jorge Becerra) intersect in an urban gay scene characterised by lonely streets and desperate assignations. While not quite a love triangle, they choose from among the same available suitors, shifting between solitude and attraction. The film relates their complicated affections via constant movement, paced to compulsive sexual desire. Hernandez’s style recalls the verve and delicacy of Max Ophuls – specifically La Ronde’s (1950) narrator, announcing “I am the personification of your desire to know everything.”

Ophuls wasn’t required to do any sociological special pleading, and Hernandez ignores that gay-lib burden and launches into every event as a mode of being in the world – both as reverie and as documentation of gayness as an unembarrassed state of humanity. Each young man realises his personal appetites and aspirations through the common sojourn of cruising, discovering his place in the world and the depth of his own feelings. Beyond the barrier-busting conceits of mainstream hits like Milk (2008), Brokeback Mountain (2005), Philadelphia (1993), Kiss of the Spider Woman (1985) and Sunday, Bloody Sunday (1971) – films that spend too much effort on arguing the legitimacy of same-sex affection – Hernandez presumes his characters’ validity and film culture’s sympathy. Inspired by Cocteau and Fassbinder, he asserts passion as unselfconsciously as cinema’s greatest ambulatory romantics — the likes of von Sternberg, Borzage and Mizoguchi as well as Ophuls. 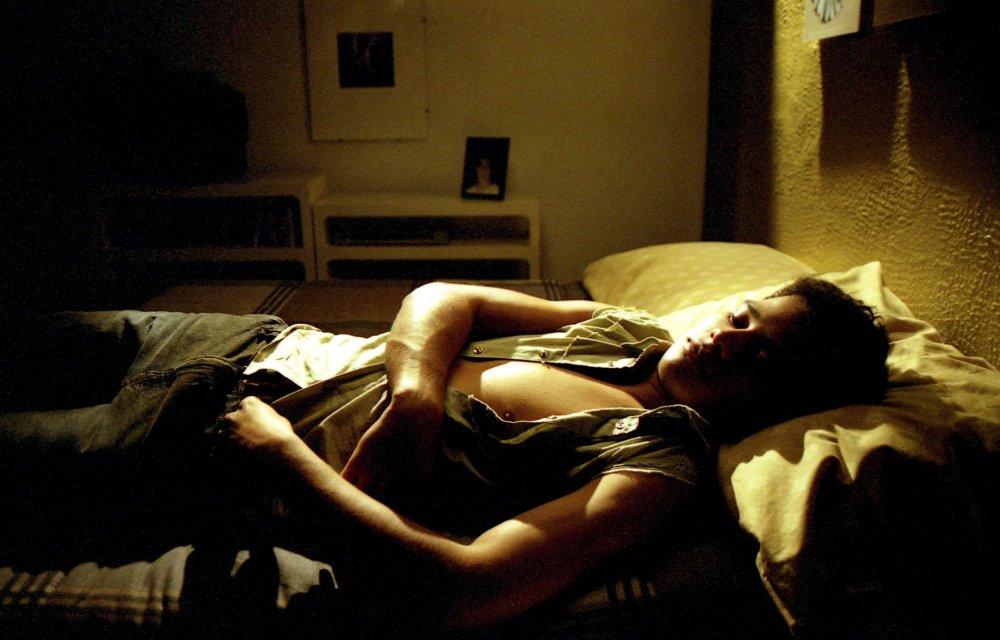 It is Hernandez’s debt to these masters – lessons well learned at Mexico’s Centro Universitario de Estudios Cinematographic (CUEC) – that makes his films so momentous. In A Thousand Clouds of Peace the debt was already apparent; Broken Sky showed links to Resnais and Godard through use of time shifts and colour fields. The trilogy as a whole defines the look and the lore of desire in this third-world, ethnic environment, making it a larger project than those European gay films that join the romantic tradition casually — even such multiculturally open films as those by André Téchiné, Ducastel-Martineau and Gaël Morel.

For Hernandez, his film’s dark-skinned, dark-eyed lovers of Indian origin personify specific cultural traits and confirm a universal sexual longing. The film’s sexual candour complements the work of such directors as Tsai Ming-Liang and Apichatpong Weerasethakul, but he is also distinctive in proposing that youthful gay passion and its accompanying spiritual turmoil are as normal – and confounding – as nature. It’s not just Ryo, Tari and Kieri who gaze first crotchward, then heavenward, but also Hernandez himself – a post-Stonewall, AIDS-era visionary who elevates sexuality as part of his cultural heritage and its organic myths. His film’s titles (uplifting allusions that counterpoint despondency) impart a certain divinity to feelings that society has historically shunned as deviant. The trilogy’s dramatic pattern – moving from neutrality to tragedy to fury – relates a rise in desire and consciousness for his naïve heroes to learn love’s toughest lessons.

Raging Sun, Raging Sky begins with a woman – Tatei (Giovanna Zacarias), identified as ‘El Corazon del cielo’ [The Heart of the Sky], who Hernandez reveals as the spirit of human passion. She is introduced walking through Mexico City’s urban wilderness, alive to the elements, telepathically listening-in on the personal lives of the citizens going about their daily routines. The camera (guided by cinematographer Alejandro Cantu) moves with Tatei, noticing desire everywhere in different genders, classes, occupations and anxieties. This mesmerising introduction is key to Hernandez’s approach; the emphasis on gay life is expansive and pansexual. His art depicts the universal essence of yearning.

Tatei allies herself with young Ryo, connecting to his naïve yet avid longing. At first smiling at each other on the street, their bodies are stimulated by a sudden night-time rainstorm. Where the naturalistic daytime images had a theatrical feel, this noir-ish sequence becomes almost metaphysical, resembling a watery Tarkovsky tableau. The rain penetrates the indoor location of Tatei and Ryo’s tryst, mysteriously interweaving concrete and ethereal realities. Naked revelation, erotic commingling, collaborative exploration all show how both male and female physical need resemble animal instinct and correspond to atavistic ritual. The coupling goes in and out of natural and metaphorical tenses. Tatei’s laughing / crying seduction inspires Ryo’s empathy and she emboldens his sensuality. It is simultaneously feminist and macho, yet Hernandez infantilises the male as erotically newborn, a spiritual virgin, a cadet embarking on emotional high seas.

“O, beautiful Ryo, the vigorous. A mighty companion will come to you. And his vigour will be like a piece of sky. That is, perfect, superb. Impetuous stream, go find him. Responsibility is in your hands. Be your eyes attentive. Be careful. Don’t be afraid. Go and liberate the world of this misfortune. Love will be your guide.”

This oration stands out amid Hernandez’s usual non-verbal fluency. It’s an overture to his use of the actual with the symbolic, affording him the poetic capability to endow lust with spiritual legitimacy. 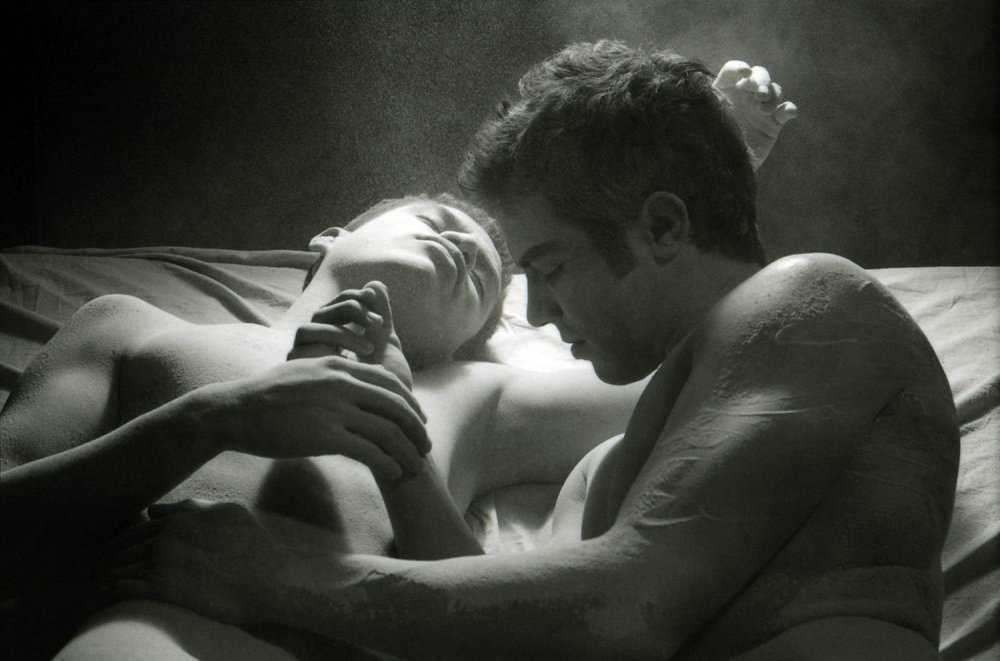 Hernandez’s combination of sensuality and gravitas recalls what Antonioni said at the 1960 Cannes Film Festival about the inspiration for L’Avventura: “Eros is sick.” This was not a judgement on promiscuity but, as critic Gregory Solman has pointed out, Antonioni sympathetically describing “a symptom of the emotional sickness of our time.” Hernandez accepts that observation as a modern truth, applying it to the seldom-examined morality of liberated gay male sexuality. He takes the desperate yearning of Antonioni’s characters and gives it youthful piquancy – mediated by his awareness of Mexico’s ethnic history and pop music culture. The daring frankness of Hernandez’s sex scenes (Tatei and Ryo’s coupling and the blazing, intensely illuminated bodies that begin Broken Sky) combine today’s cinematic candour with philosophical rectitude. Hernandez trains his camera-eye on the byways of carnal behaviour – alleys, train tracks, porn cinemas, discos, bath houses and sex clubs. He brings awestruck Antonioni with him, Sternberg for the glamour of sexual attraction, Resnais for the mind-bending sense of passing time, and Ophuls for the vertiginous yet sobering thrall.

Cinema has rarely, if ever, given gay experience this high level of witness and contemplation. Hernandez evokes his great forebears as part of the modern, intelligent love experience. Not for him the simplistic evangelising of politically correct agit-prop; instead, Ryo, Tari and Kieri’s conflicts match the romantic audacity of Wong Kar-Wai’s gay love story Happy Together (1997). This is a conscious departure from Gus Van Sant’s grim tales of the loveless gay demimonde (Mala Noche (1985), Gerry (2002), Paranoid Park (2007)) in favour of optimistic romanticism.

Raging Sun, Raging Sky maintains a sense of spiritual tumescence, keeping viewers alert to the excitement of sexual attraction. When Kieri ventures into the porn cinema where he first encounters Tari and Ryo, the extended tour-de-force sequence ranks with Cocteau-Genet’s Un Chant d’Amour (1950) for magnifying the minutiae of the male sex hunt. Hernandez investigates the place, studying the interplay of seekers along with the architecture of isolation and communion – the over-bright corridors and claustrophobic lavatory. Above all, these spaces occasion a muted dance of aspiration, desolation and furtiveness – including a passion that, when exposed, hides in violence. (One cruiser wears a T-shirt with Depeche Mode’s pun: “touring and suffering in various tempos”.) Here is where this largely silent filmmaking is most captivating. It adds significance to anomic gestures. Kieri, Tari and Ryo barely know each other, yet through Hernandez’s fondness for emotive, hieratic performances, we see their common anguish and craving. Hernandez and Cantu substantiate the humbling world they share.

This T-room sanctorum avoids any sacrilegious or blasphemous taint because Hernandez doesn’t have a subversive agenda. Yet he invests these pervs with beauty and passion, never falsifying their lasciviousness. The trope of movie-theatre as gay subculture’s orgiastic retreat has appeared in Jacques Nolot’s Porn Theater (La Chatte à deux têtes, 2002), Tsai Ming-Liang’s Goodbye Dragon Inn (2003) and Brilliante Mendoza’s Serbis (2008), but it climaxes here. Hernandez treats the cinema culture as a mix of popular dreaming and pornographic exploitation. (His own short Bramadero (2007) appears as a coming-attraction poster.) It’s where shame and desire compete like Broken Sky’s sex-club sequence scored to Dvorak’s majestic nymph legend, Rusalka. This cineplex trope confirms Hernandez’s sophisticated awareness of the many ways film and desire, society and imagination intersect.

After two hours of the character’s entanglements – picking up strangers and failing to connect – Hernandez shifts his subjects into a second mode with the on-screen title ‘Enraged Sun, Enraged Sky’. The changed tense indicates that these period-set, mythological scenes depict the origins of desire, casting Ryo, Tari and Kieri as warriors, vassals and conquistadors. This is Hernandez’s ennobling fantasy of gay ardour, depicted through an archetypal struggle for happiness and commitment, just as Tatei foretold. This odd choice for the narrative’s development suggests that Hernandez is vindicating desires that even gay cinema has long obscured. His freshly created legend embellishes hidden thoughts: a tale of competition, entrapment, rescue and chivalry. Ryo, Tari and Kieri as restrained lovers and a vengeful outsider become primordial figures. Their clay-caked bodies and serpentine slithering on dry earth or in dank caves suggest religious symbols with prophetic antecedents. (Hernandez begins the film with a quote from Bernardino de Sahagun, the Spanish Jesuit who studied Aztec culture in the 16th century. His epigraph anticipates the first line in Antonioni’s La Notte (1961): “How shall we live?”)

In Raging Sun, Raging Sky, Hernandez uses myth to break through the surface of sex, going deeper into a cerebral/emotional cavern – deeper into Cinema. He achieves what an Antonioni scholar called “the bliss of camera movement.” Bliss because its rhythmed, visual beauty also stirs compassion and enlightenment. It’s the weight of these camera movements that is so spectacular. He gives close-up spiritual and physical detail to modern sexual experience we routinely take for granted and makes them momentous.