“The tramp stuff”: when Hitchcock first came to Hollywood

Newly discovered articles reveal how the master of suspense pounded the pavements of Los Angeles when he first came to America, and how his plans to make a film about the Titanic disaster fell through. 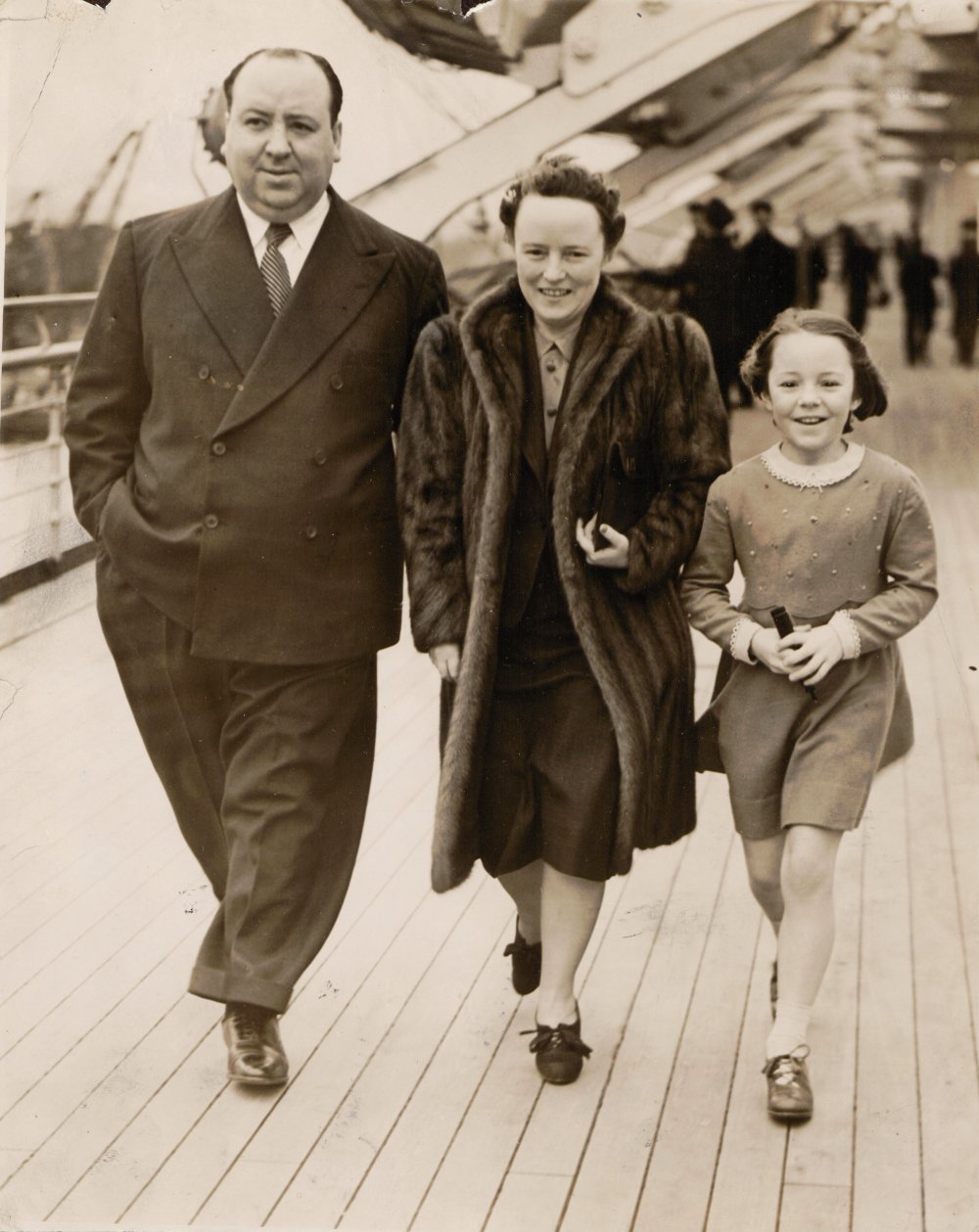 You’d be surprised how little we know about Hitchcock. There are stacks of books about him, but in the absence of letters or diaries, much remains obscure. He gave François Truffaut pages of anecdotes but little of his inner life. He did, however, publish his thoughts from time to time in newspapers and magazines, and recently I discovered a series of three articles, unknown since their original publication, that shed light on what must have been a momentous experience: his first exposure to the city he would make his home, Los Angeles. [All three are republished in full in the current issue of the Hitchcock Annual.]

Hitchcock and Alma Reville, his wife and frequent collaborator, boarded the Queen Mary at Southampton on 1 June 1938. Hitchcock had just finished shooting The Lady Vanishes, his 22nd film, and had just announced the title of his 23rd, Jamaica Inn, based on Daphne du Maurier’s novel. In the US he had been a big name since the release of The Man Who Knew Too Much and The 39 Steps in 1935. That autumn, Observer film critic C.A. Lejeune, a friend of the Hitchcocks, wrote that he was a “national institution” whom “itinerant American journalists demand to see”. 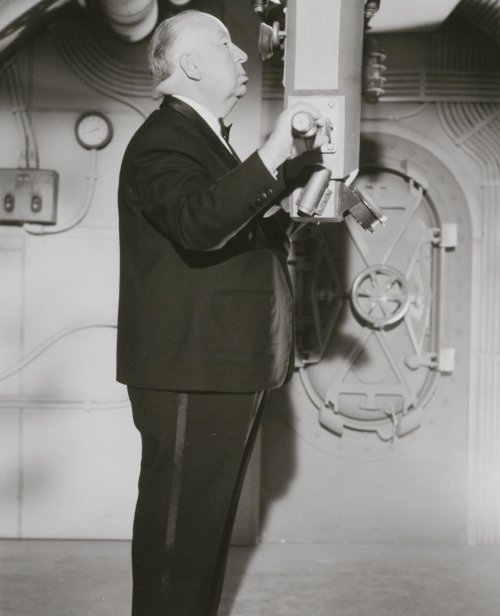 One such was New York Sun writer Eileen Creelman, who met him again as he passed through New York in June 1938. “He collects information greedily, asking what he may expect to see in Hollywood, how this is done, where this or that place may be,” she wrote. “Usually he knows such details.” He knew the streets of New York “even before he arrived”. But he was far less familiar with Los Angeles. As he told Truffaut decades later, “I wasn’t in the least interested in Hollywood as a place. The only thing I cared about was to get into a studio to work.”

He was there to sign a contract with David O. Selznick for his first American picture – Titanic. It was the summer of Gone with the Wind casting rumours, and the Selznick studio was the focus of international press attention. Within a few days of Hitchcock’s arrival on the Coast in mid-June it was announced that Selznick, a major independent producer, would have to partner with MGM, run by his father-in-law Louis B. Mayer, in order to cast that studio’s Clark Gable as Rhett, and Norma Shearer as Scarlett.

Hitchcock happened to be represented by Myron Selznick, the most powerful agent in the business, who annoyed his younger brother by shopping Hitchcock around the studios before the deal was closed. In the Paramount commissary, the Hitchcocks dined with many of the leading directors of the era, including Frank Capra, George Cukor, Howard Hawks and Rouben Mamoulian, as well as the company’s founder and chairman Adolf Zukor.

In another studio, he wrote in one of the three articles, published in the London Evening News immediately on his return, Hitchcock “saw a full-sized trawler in a huge tank for some sea scenes”, and while he was familiar with back projection, “the background of this scene I saw was made up of three screens showing a wide panorama of seascape and each part blended into the other without noticeable join”. The scene obviously had some relevance to the film he planned to make for Selznick. 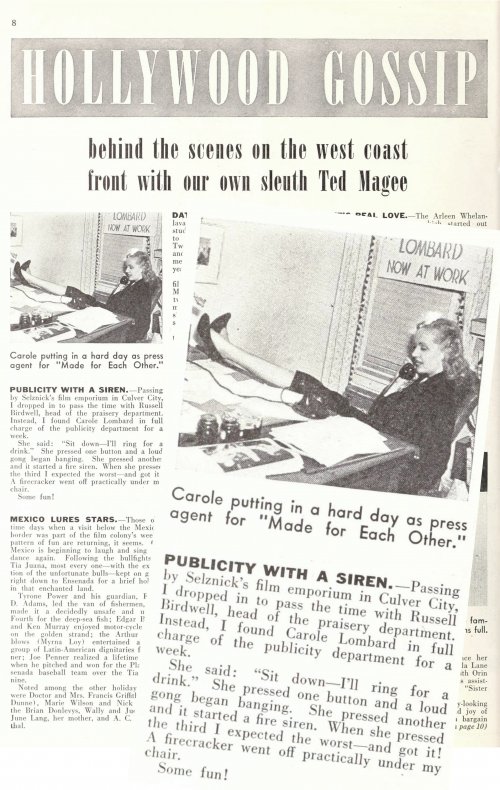 Titanic was announced, as fate would have it, by screwball queen Carole Lombard, who briefly took over Selznick’s publicity department, as a comic bit, in early July; at about the same time she was made honorary mayor of Culver City, the LA suburb that was home to both the Selznick studio and MGM. Being in a celebrated romance with Gable, she parried questions about Gone with the Wind, describing herself as “probably the only actress in Hollywood who’s not even been mentioned”.

The conference announcing the Hitchcock-Selznick deal was attended by two syndicated columnists with a long rivalry ahead of them, the veteran Louella O. Parsons and the neophyte Hedda Hopper, of the Los Angeles Examiner and Los Angeles Times respectively. Lombard, said Hopper, “put on a swell show. Sirens shrieked, guns popped. Carole dressed in black tailored suit, wearing orchid, sat beside bowl of American beauties, and was in her usual form – tops.”

Parsons reported that Lombard, told by the assembled hacks that the Titanic announcement would go over better with casting news thrown in, had replied: “Well, I think any director who comes six thousand miles to put his name on a contract as Mr Hitchcock did, is worth a headline story.” In fact, he intended the ship to be the star. Hitchcock, who would direct Carole Lombard a few years later in Mr and Mrs Smith, her penultimate film before her tragic death in 1942, recounted only that she and Gable were much as they appeared on screen.

The Hitchcocks left Los Angeles shortly after signing. Passing back through New York on the return journey, Hitchcock informed the New York Times that he “hadn’t seen much” of the place, mostly “the pavement between his hotel and Myron Selznick’s office” at Hollywood and Vine, where he would have afternoon tea ordered in from the Brown Derby restaurant. Perhaps, one afternoon, with or without Alma, he might have visited the Grand Theater in downtown Los Angeles, to see the new import from Sweden, Intermezzo, and its rising star Ingrid Bergman. 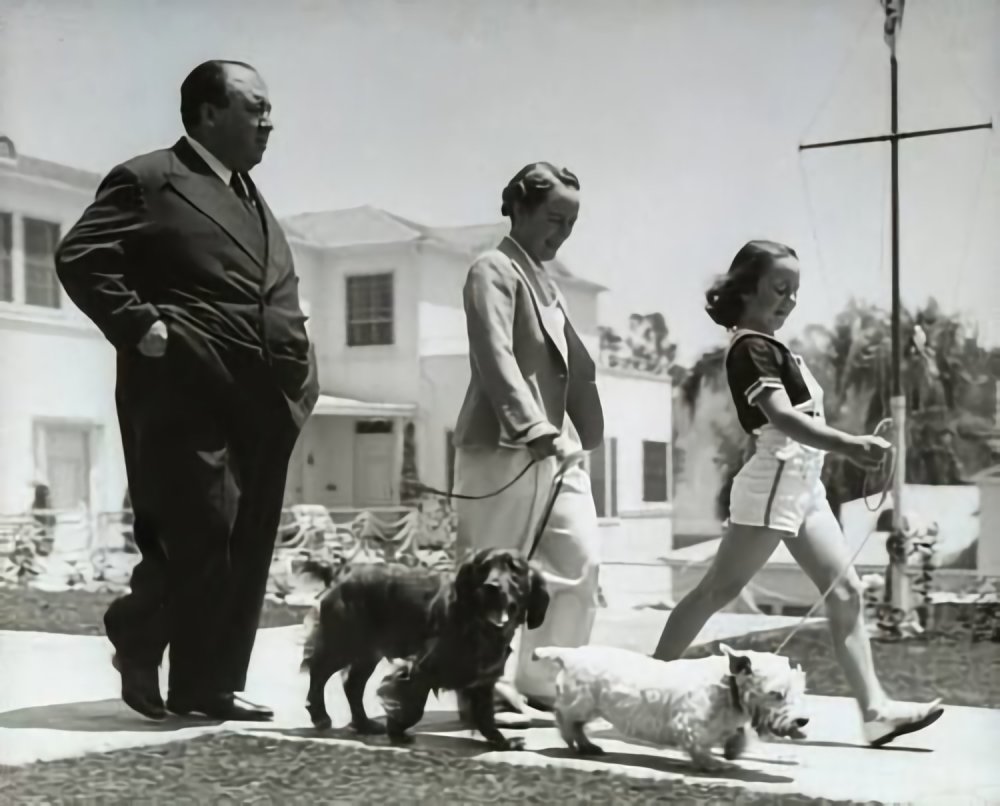 The family Hitchcock near their first Los Angeles home on Wilshire Boulevard, as depicted in a 1939 Life magazine profile

In the final article Hitchcock discussed the place itself. “Distances are great and you seldom see people walking. To walk is like being a tramp and you may invite the sort of attention from the police that tramps expect.” He claims to have lost two stone walking, “much to the dismay of my hired chauffeur, who kept pleading with me to take a lift”.

Back in 1935 he had told Eileen Creelman that “you simply can’t do a picture unless you’ve seen the place”, and in that sense Hitchcock never really saw Los Angeles. “Whether I shall be able to keep up the tramp stuff when I return early next year to make a film there I cannot say,” he wrote in 1938. Figuratively speaking, he stayed inside the car for the next 40 years, scarcely exposing a foot of film outside the studios.

Hitchcock would recreate Mount Rushmore, a Rio de Janeiro mansion and, spectacularly, a Greenwich Village courtyard, but not the city in which he lived. He filmed location sequences in San Francisco, New York and London, but not in LA. Hitchcock preferred these older walking cities to the centreless sprawl of his adoptive home. Later in life, holed up in Bel Air, where he had his food flown in from the old country, he told Penelope Gilliatt “that his reason for liking Hollywood is that it leaves him alone,” a relationship that went both ways. 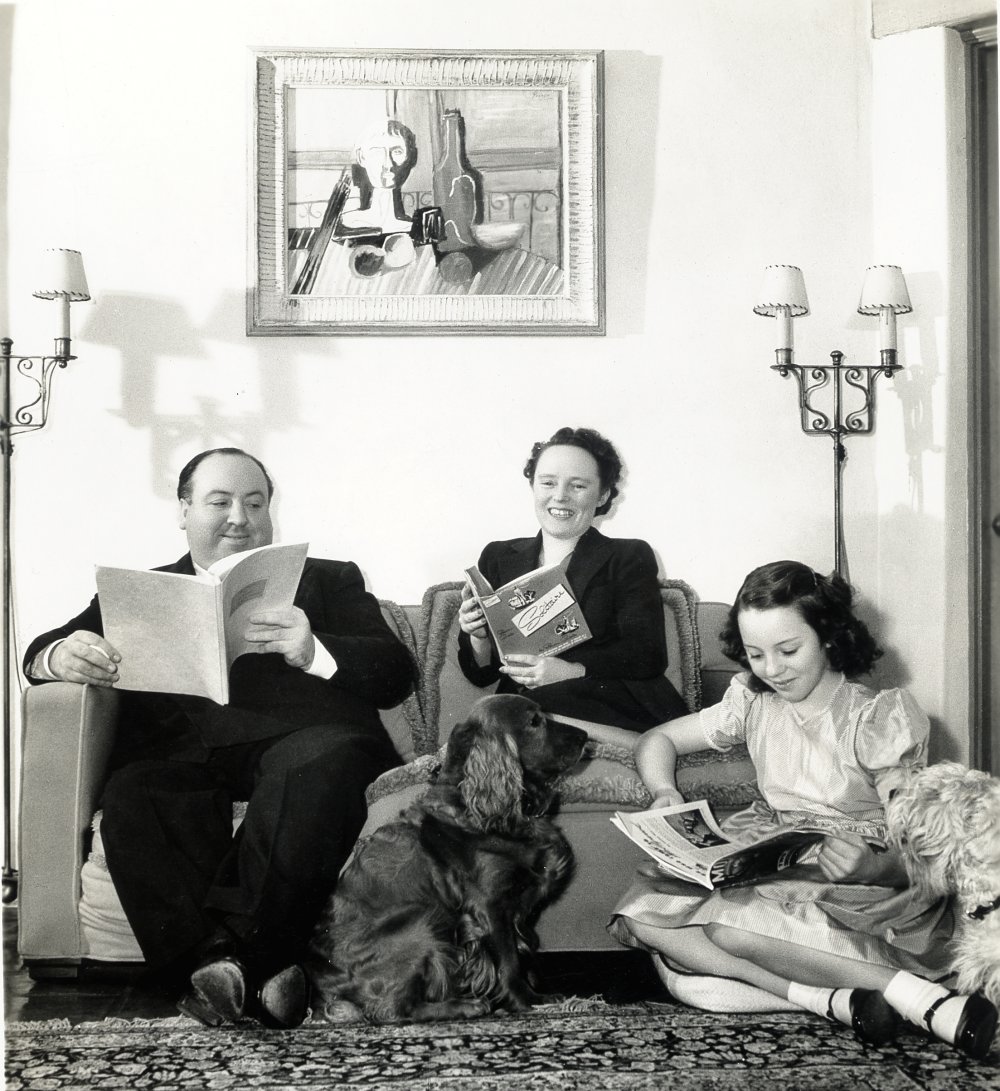 Hitchcock never did make Titanic. Even as it was being announced, the Selznick organisation was coming around to a new property. During the negotiations for Jamaica Inn, Daphne du Maurier had given Hitchcock an advance copy of her new novel, and he had converted one of Selznick’s lieutenants, Kay Brown, to the cause before leaving England. He took the book to Los Angeles, and soon his and Brown’s enthusiasm came to be shared by Selznick.

By September 1938 Rebecca was being spoken of as Hitchcock’s second American picture after Titanic; in the event it was his first. The film Hitchcock made from it, with a largely British cast, was set in Cornwall, and shot in Culver City, but takes place in the mind.

Related to “The tramp stuff”: when Hitchcock first came to Hollywood