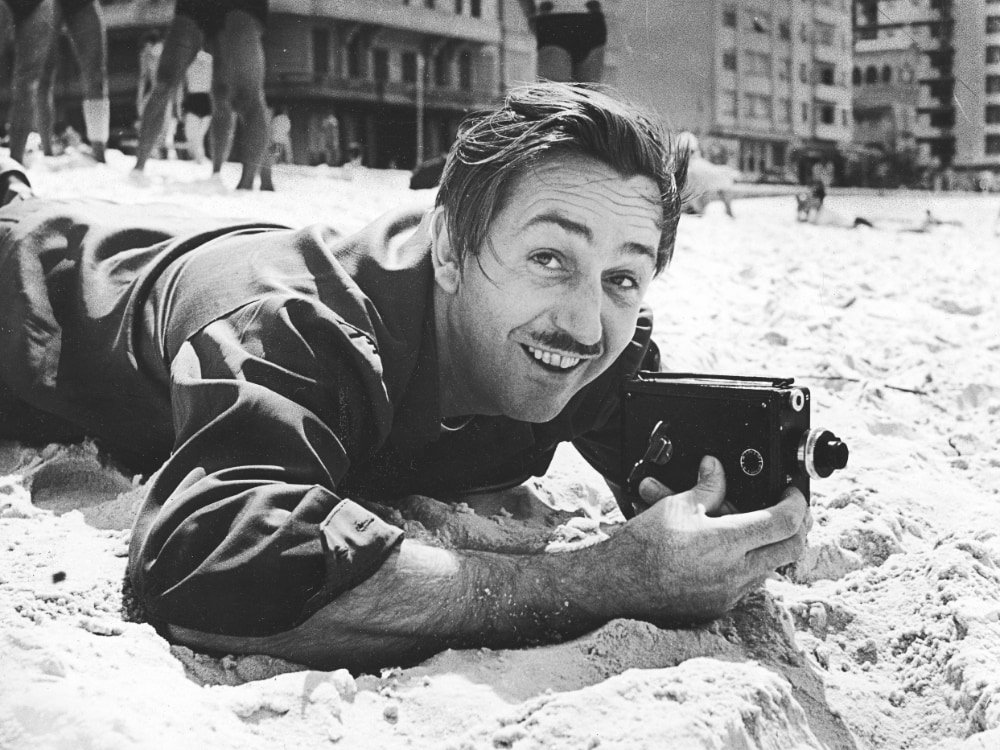 Wow. You sit atop the biggest storyteller in the Western world, the biggest image-maker, the biggest entertainment house. I’m here on a grey autumn day in Scotland, thinking of the hue and verve, the magic-carpet ride of the best of Disney, Pixar, 20th Century Fox, Star Wars, Marvel, Deadpool and the scale of National Geographic. Of course, all are part of your Disney stable, your duty of care. Most of the great people and films you preside over – Gene Tierney and Snow White, How to Marry a Millionaire and the great animator Ub Iwerks – pre-dated me, but they are part of what makes grey days like this easy to defeat.

I can’t imagine being you. I’m a filmmaker in the margins of cinema, on the foothills of Vesuvius. You’re the volcano, the eruptor, the ground-shaker. This letter is about ground-shaking. I’ll tell you why, but first can I wind back the clock?

Look at the picture above: Walter Elias Disney, on his belly, in the sand. Enviable hair, and far more alive than a picture of this vintage should allow. His wee camera, his eyes upturned to life, as if it was a volcano, ready to capture it, whatever it takes.

Walt was a utopian. There was a bit of the Bauhaus about early Disney. Walt, to use his own words, believed “in being an innovator”. That famous quote: “We don’t look backwards for very long. We keep moving forward, opening up new doors, and doing new things, because we’re curious and curiosity keeps leading us down new paths.”

Do you see curiosity in his face in this picture? I sort of don’t. I see something a bit more. Curiosity is the thing you feel when you sit in a chair, when you’re not involved. Walt was involved. The risk of Snow White and the Seven Dwarfs! The drive for perfection, for new types of movie movement, colour, myth and pleasure.

Pleasure – it’s why we’re here, us movie lovers. The pleasure of shots and cuts, abstract at times, uncensored, unforeseen, larger than life. This pleasure feels like a volcano, which brings me back to two things in particular.

The first is the difficulty cinema programmers in the UK and US have been having in getting access to classic 20th Century Fox titles since the company was bought by Disney in spring 2019, restricting these films in the way you have long done for Disney titles. I know this situation is evolving but, mate, All About Eve (1950) and The Grapes of Wrath (1940) and Die Hard (1988) and The Day the Earth Stood Still (1951) and With a Song in My Heart (1952) aren’t just yours. They are part of our heritage, our language, they’re in our blood like the Empire State Building or The Jam’s Eton Rifles, or the Scottish film Gregory’s Girl (1981). You must make sure these films continue to be available to anyone in the world who wants to book them.

Some of that revenue came from me. I see most of your big films, often on grey days, and often I feel better when the lights go up. But, like millions of people, like the guy lying on his belly in the sand, I’m passionate about films, their history, their language and their ability – for more than 12 decades now – to alert, enrich, sooth and galvanise.

So I have a proposal. What if Disney dedicated 0.1 per cent of its profits to film restoration, or innovators in film culture? Those who show movies to your audience, including your future audience. The keepers of the flame of film. Those keepers benefit from Disney’s tent pole, its excitement, its volcano. But Disney benefits from them, the audience, the believers, just as much.

A mere 0.1 per cent of your profits is $12.6 million, which could help change film culture. And if that’s beyond the pale, add another zero to get the tiny fragment that is 0.01 per cent. Come on, might that painless amount not make your shareholders feel a bit better about the world? Don’t you owe it to us, the film lovers?

And don’t you owe it to the movies?

The next time you’re on Santa Monica beach, with your friends or family or kids or alone, and you lie on your belly in the sand… Call or email someone and authorise this tiny film fillip.