The endearingly modest actor with famously flexible eyebrows claimed he did little more than learn his lines and avoid the scenery, but his talent helped him to segue from a hugely successful TV career, including his long-running role in The Saint, to become a beloved 007, noted for his easy charm and sex appeal, says Kevin Lyons (with contributions by Patrick Fahy). 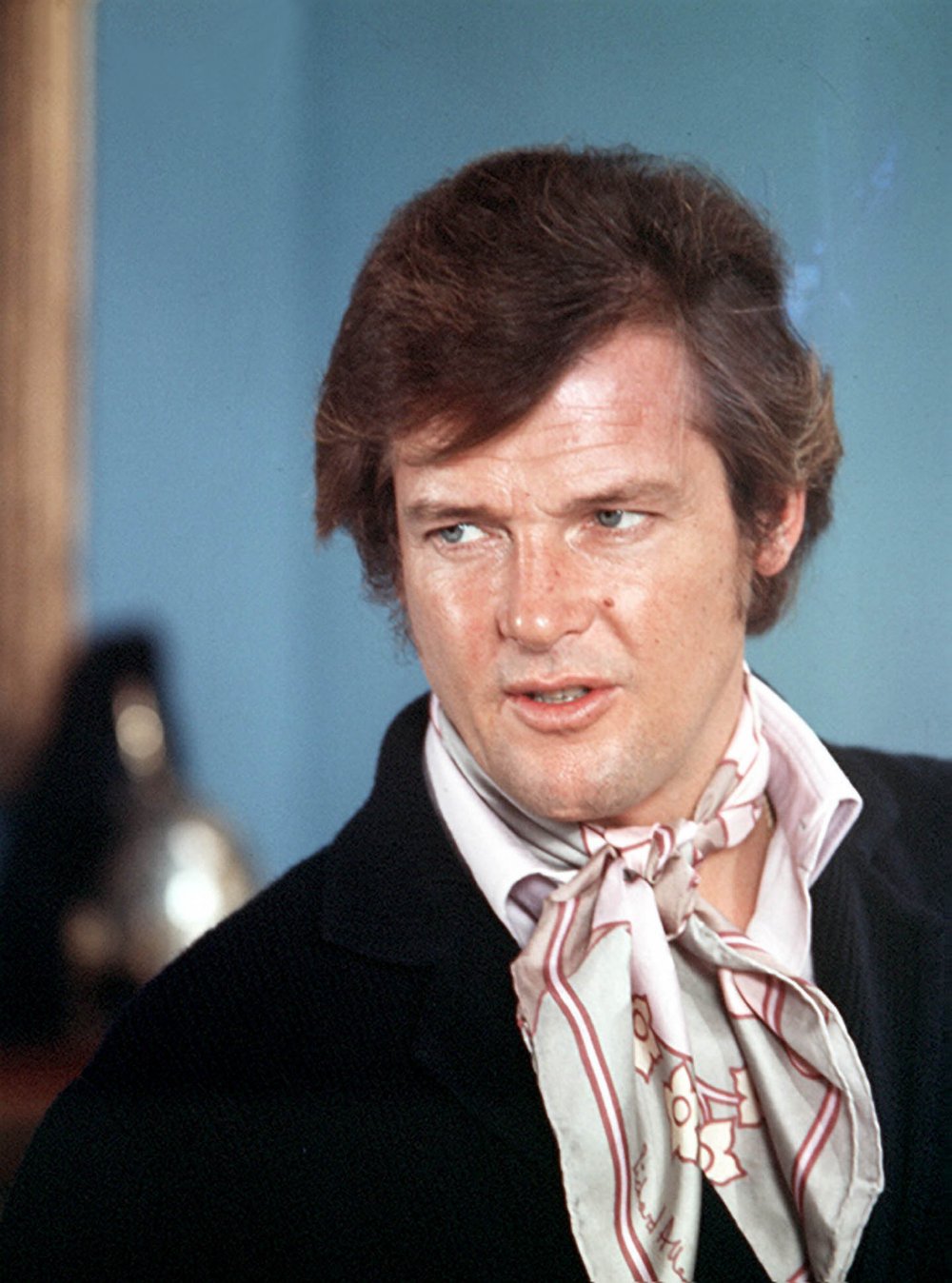 Roger Moore, who has died aged 89

Roger Moore, who died on 23 May 2017, never considered himself much of an actor: “My acting range has always been something between the two extremes of ‘raises left eyebrow’ and ‘raises right eyebrow’,” he frequently deadpanned in his endearingly self-deprecating way. But this belied a talent capable of genuinely accomplished performances, coupled to an easy-going charm and wit that made him one of the biggest stars of both the small and big screens in the 1960s and 70s.

Born in Stockwell, south London on 14 October 1927, Moore left school at 15 to become a trainee animator but was fired after only a few months. His father, a detective sergeant in the Metropolitan Police, was investigating a break-in at the home of film director Brian Desmond Hurst and arranged for him to meet his son, resulting in an uncredited extra role in Gabriel Pascal’s Caesar and Cleopatra (1945). Hurst was impressed by the young Moore and paid for him to attend Rada, where he studied for three terms. 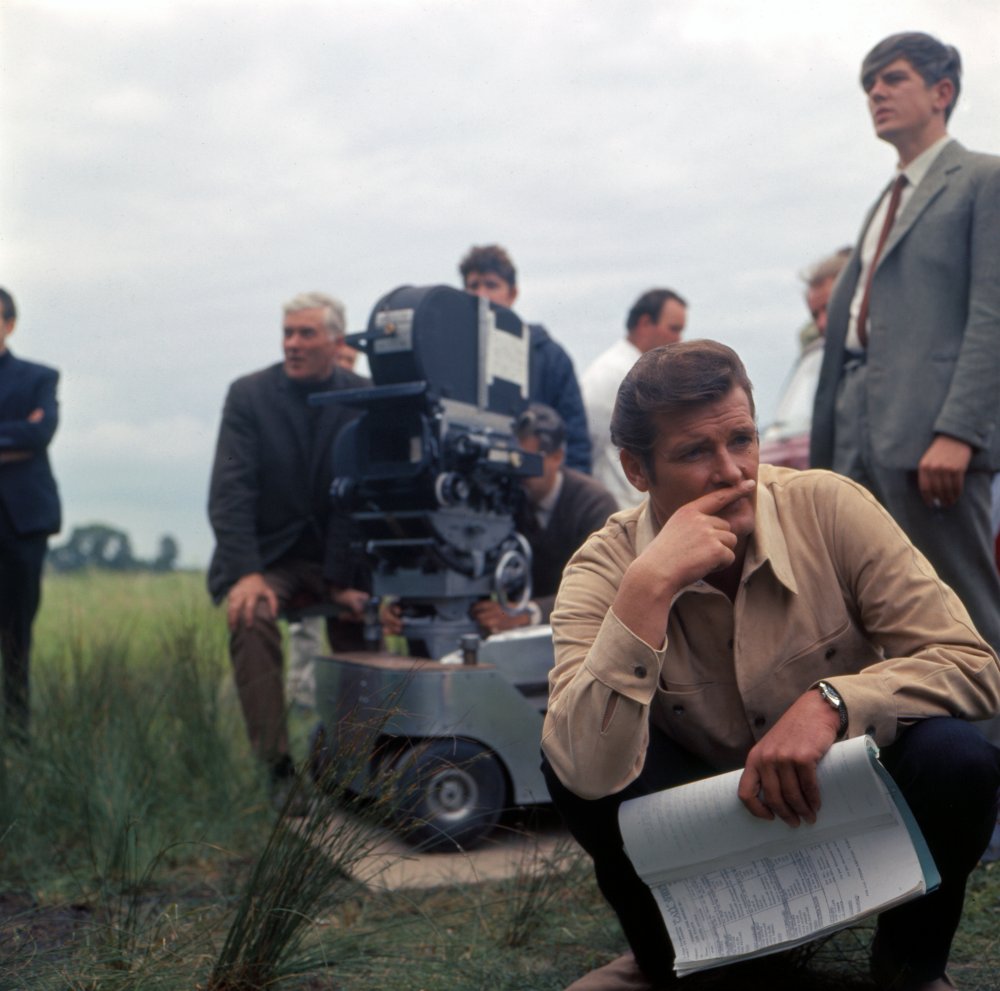 Following a three-year stint in the Combined Services Entertainment Unit in the British Army during his national services, Moore returned to acting and bolstered his earnings by modelling knitwear (he would later refer to himself in these shots as The Big Knit) and appearing in romantic photo stories. In 1953 he moved to New York, finding work on US television and eventually signing a contract with MGM that saw him cast in a string of largely unmemorable films. True to form, Moore would later dismiss his tenure with the company with the claim, “At MGM, RGM [Roger George Moore] was NBG [no bloody good].”

Television served him rather better. In the UK he was the eponymous hero in the hugely popular Ivanhoe (1959) and back in the States he was an unlikely but popular choice for a pair of western series, taking the lead in The Alaskans (1959-60) and a recurring guest role in Maverick (1960-61). His big break came in 1962 when he returned to the UK to take up the mantle of Leslie Charteris’ The Saint in a series that would eventually run to 118 episodes from 1962 to 1969. He cemented his status as one of television’s best-loved stars with a turn opposite Tony Curtis in the comedy adventure series The Persuaders! (1971-72) for which Moore was paid an unprecedented £1 million for a single series, making him the highest paid television actor in the world. 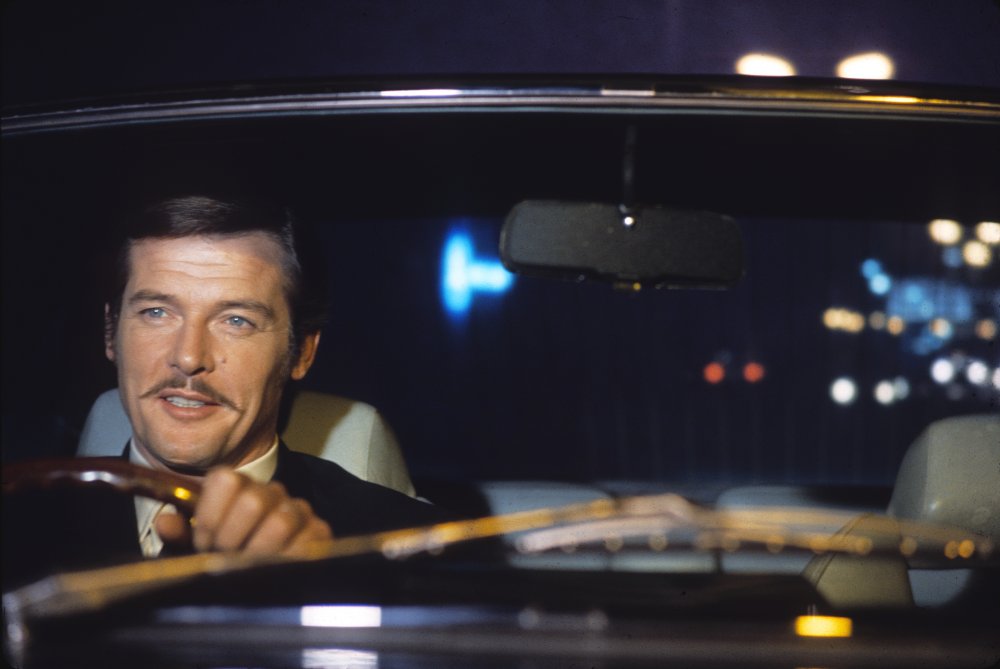 Roger Moore in The Man who Haunted Himself (1970)

Between The Saint and The Persuaders! Moore had appeared in two feature films. Crossplot (1969) is a lightweight espionage thriller, but Basil Dearden’s The Man Who Haunted Himself (1970), in which Moore plays a buttoned-down financier stalked by his murderous doppelganger, gave Moore the chance to demonstrate just how versatile he really was. Writing in the Guardian in 2004, Moore claimed, with some justification, “It was one of the few times I was allowed to act… Many say my best role was in The Man Who Haunted Himself. Being a modest actor, I won’t disagree.”

In 1964, Moore had appeared in an episode of the BBC television series Mainly Millicent (1964-66) as James Bond but it wasn’t until August 1972, when Sean Connery stepped down for a second time after Diamonds Are Forever (1971), that Moore finally stepped into 007’s perfectly tailored safari suit to become the third actor to play the role. From Live and Let Die (1973) to A View to a Kill (1985), Moore matched Connery’s seven-film run, hitting a peak with one of the finest films in the series, The Spy Who Loved Me, which proved the UK’s top box office attraction of 1977. 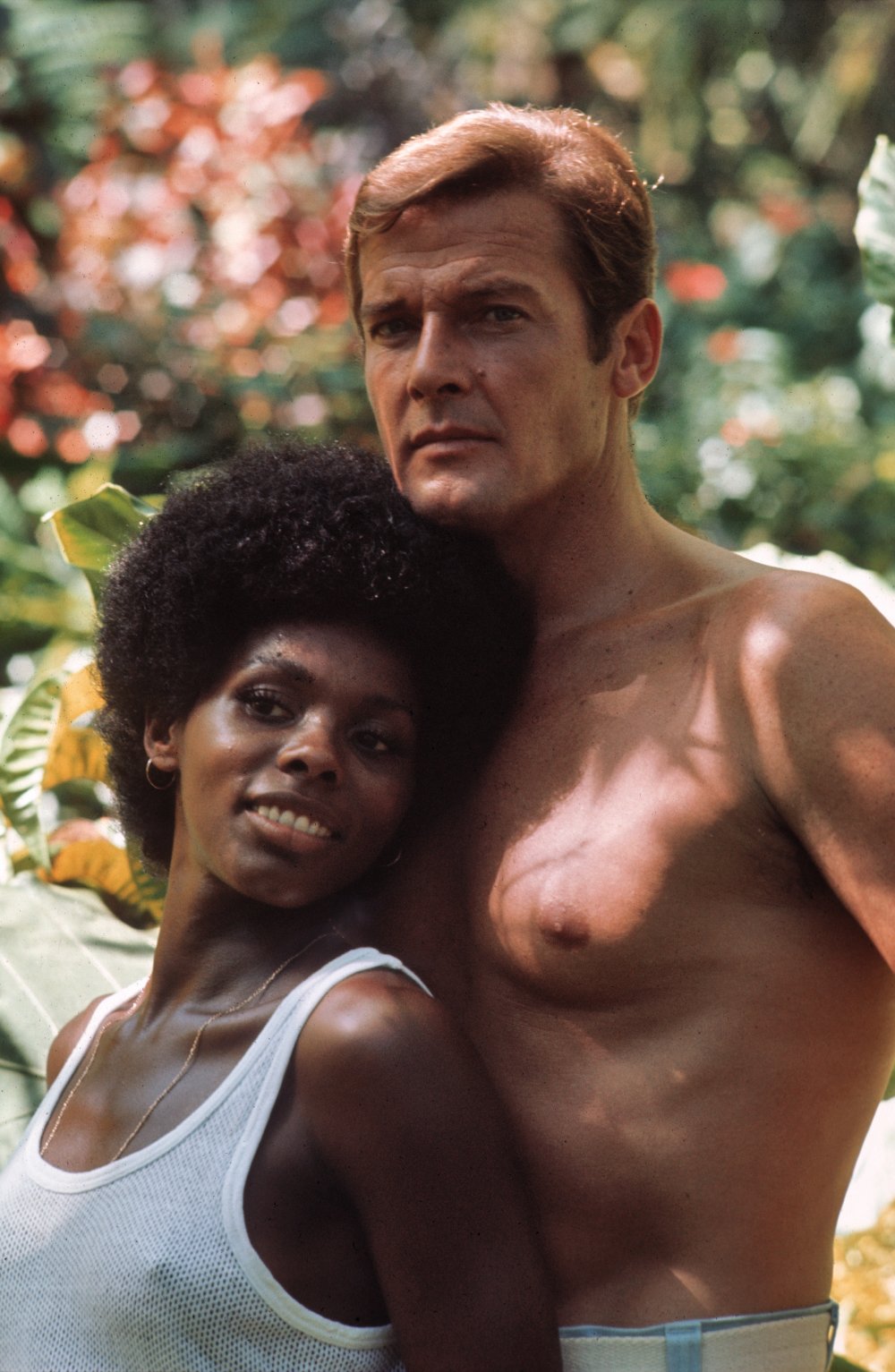 Roger Moore with Gloria Hendry in Live and Let Die (1973)

Moore took a deliberately different approach to Bond than either Connery or On Her Majesty’s Secret Services’s George Lazenby. When asked what he would bring to the role, he initially quipped, “White teeth!” Later, though, he reflected, “Sean was a killer – I was a lover.” His Bond was an urbane, charming and unflappable man of the world whose gentlemanly sangfroid came incongruously with the sarcastic humour of a cheeky schoolboy. His seven films developed the more light-hearted approach to the series that had begun in Diamonds Are Forever, leaving plenty of space for Moore’s innate charm and good humour to shine.

Between assignments for the secret service, Moore appeared in a string of less high-profile but mostly successful films, including Gold (1974), Shout at the Devil (1976), The Wild Geese (1978) – all shot in South Africa during apartheid, which drew considerable flak for Moore – and North Sea Hijack (1979). In The Cannonball Run (1981), he happily sent up his Bond persona as a tuxedo-wearing millionaire so obsessed with 007 that he had undergone plastic surgery to look like Roger Moore. But after being decommissioned by MI6 and handing the keys of the Aston Martin to Timothy Dalton, Moore took a five-year break from acting and his return to work never found him scaling the heights of his 60s and 70s work. 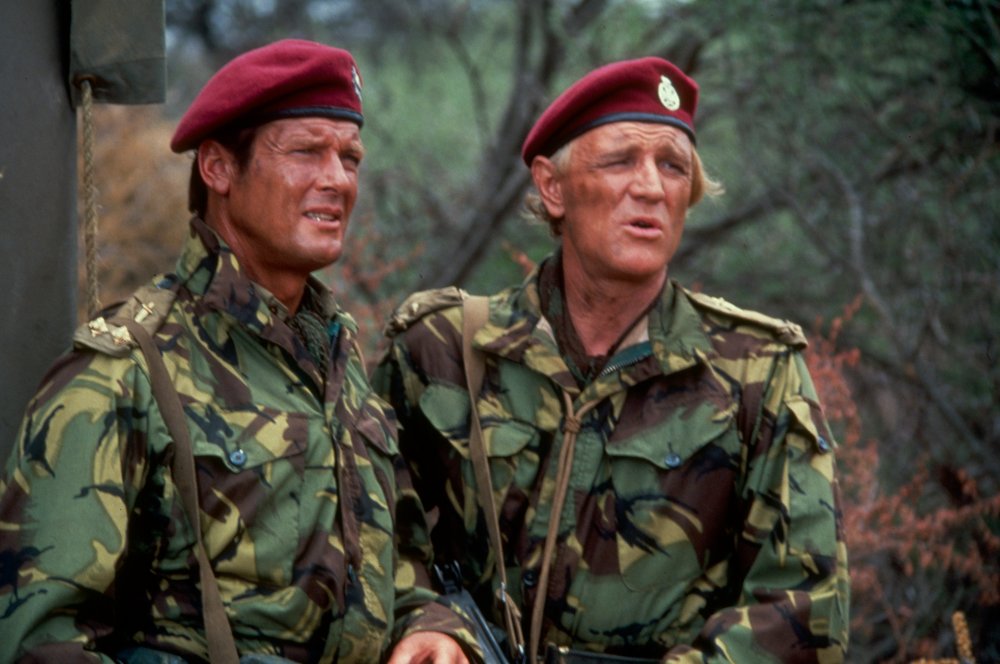 Instead, he increasingly occupied himself with his humanitarian work for Unicef. Inspired by his friend Audrey Hepburn’s work for the organisation, he became a Goodwill Ambassador in 1991. He and his wife Kristina campaigned to promote the wellbeing of children in many deprived parts of the world, work that would eventually see him awarded a CBE in 1999 and a knighthood in 2003, though, ever-modest, “Drop the ‘Sir’ ” would become his mantra when interviewers tried to call him Sir Roger. (As a Unicef ambassador he was later to rue the Bangkok river chase scene in 1974’s The Man with the Golden Gun, in which Bond is saved by a small local boy who fixes his boat; Bond thanks him not by paying him as agreed but by unceremoniously shoving him into the river and speeding off.)

At the height of his fame, Moore claimed he would cook one meal a year: the family Christmas lunch, for which he would buy the ingredients in Fortnum & Mason on London’s Piccadilly. In later years, Moore would take Fortnum’s to task over its continued selling of foie gras, the controversial luxury food. His strenuous campaigning persuaded many establishments, including Selfridges and Harvey Nichols, to stop selling it. 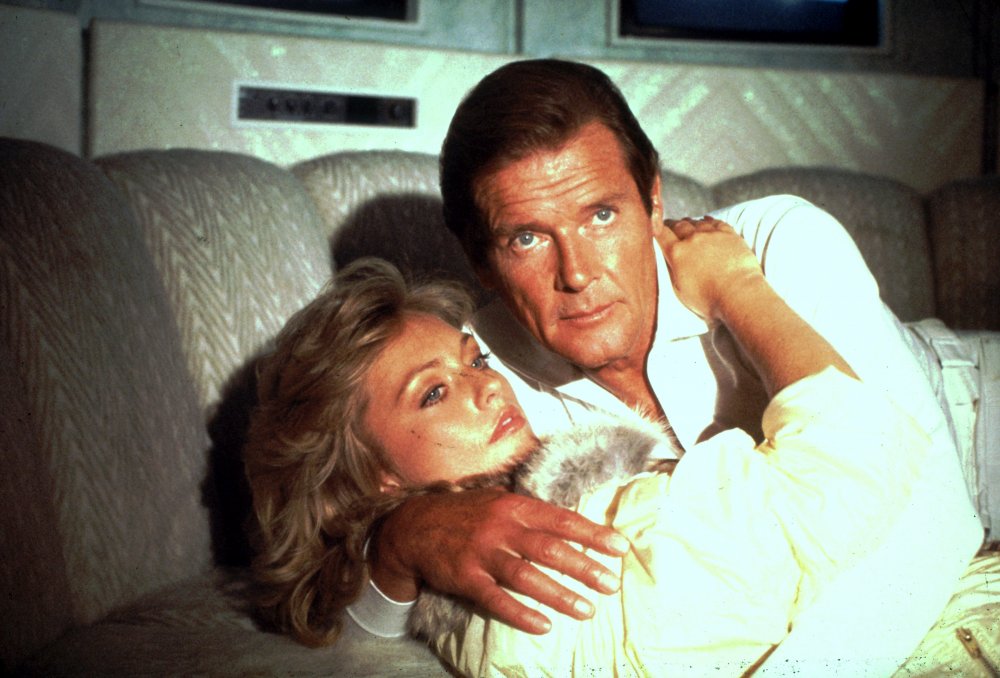 In later years, Moore embarked on a series of tours of British theatres in An Evening with Sir Roger Moore, appearing on stage with his friend and assistant Gareth Owen to talk informally about his life and career, and to invite questions from members of the audience (Moore was often touched to spot some of his famous friends among them). Almost every one of these shows sold out.

Ever a fan of light entertainment, Moore cited the BBC sitcom Keeping Up Appearances (1990-1995) as a favourite programme. He also followed Strictly Come Dancing (2004-), and when appearing on Sunday evenings in his touring show, he would ask the audience if anyone knew who had been voted off the show that night. 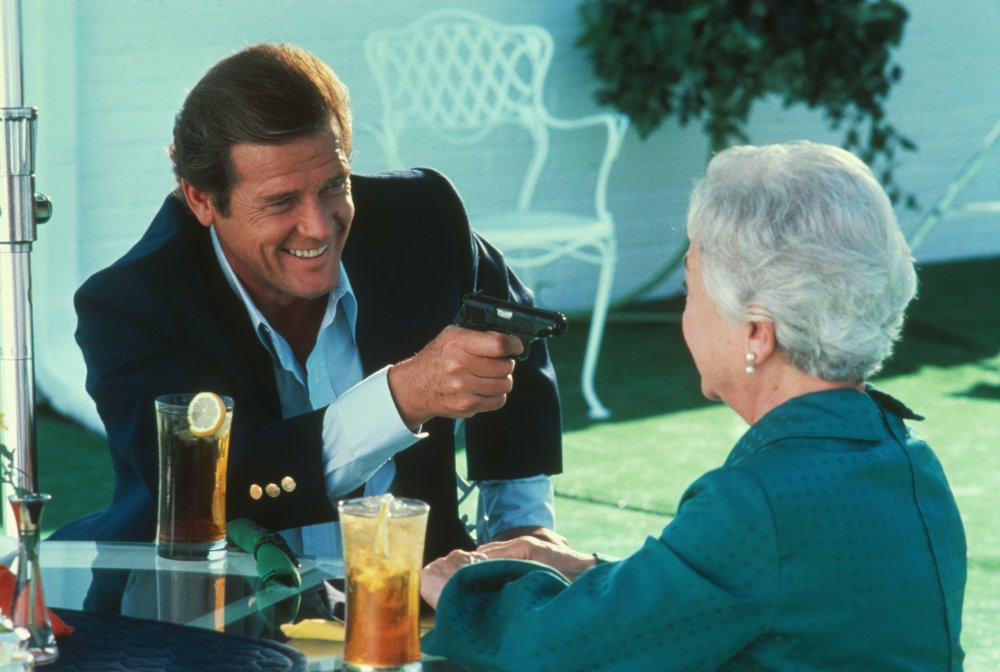 Roger Moore in The Cannonball Run (1980)

It is hard to know whether Moore really believed what he said about his own acting. His endless and often very funny mocking of his own perceived lack of talent became very much a part of his public persona, though he alone knew whether he was simply being modest or truly felt his technique required only the ability to “look at the lines, say them and don’t bump into the furniture”.

But the affection in which he was held is undoubted. For many he was the definitive James Bond, his version of the character being voted Best Bond by an Academy Awards poll in 2004. It was a role that he never escaped, but he never gave the impression that he particularly wanted to. “I would love to be remembered as one of the greatest Lears or Hamlets,” he once said. “But, as that’s not going to happen, I’m quite happy I did Bond.”