Curfew cannot curb a festival devoted to promoting the voices of the Caribbean and its diasporas. 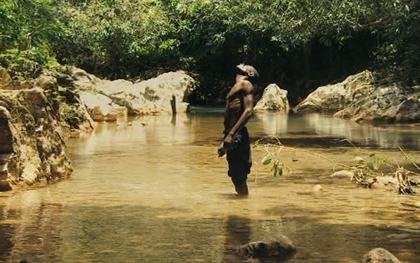 Three hours out of Miami, I woke above Trinidad’s twinkling lights. The plane banked downward over the dark range of mountains that hug the northern coast of an island whose ‘Trinity hills’, glimpsed by Christopher Columbus from the deck of his caravel in 1498, gave this land its name, and a few minutes later we bumped to the ground. Exiting the terminal past midnight, the hot night air struck my face as usual, but the highway from the airport to Port of Spain, usually buzzing with traffic, was clear.

October 2011  |  Port of Spain, and across Trinidad and Tobago

In town, the quiet was more eerie still. Avenues typically alive at all hours with ‘liming’ Trinis flirting and arguing over delicious East Indian street-food were absent of any life but lazing dogs. An 11pm-5am curfew was in effect. The government, some weeks beforehand, issued a State of Emergency that provided a piquant backdrop for the 2011 Trinidad + Tobago Film Festival.

Early the next evening, I stood by the makeshift bar in an old rum warehouse-turned-artist’s-studio outside town where the festival’s international guests and local culturati were sipping cold bottles of Stag beer or coconut water. Talk turned inevitably to the curfew. The island’s recently elected PM, Kamla Persad-Bissessar, had declared the State of Emergency to halt a rising crime wave linked to Trinidad’s use as a transshipment point for South American cocaine. 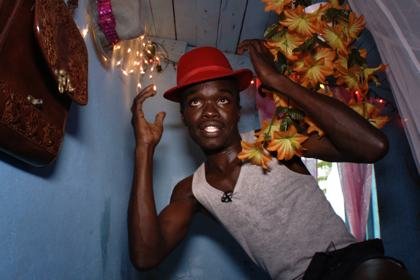 Given that the murder rate had been declining, many suggested a more political reason for the curfew: a new government, concerned about being destabilised by the island’s unions, had perhaps acted to head off a mooted general strike. Either way, few islanders seemed too perturbed. “KEEP CALM AND WATCH FILMS” said the festival’s slogan, stencilled on T-shirts and walls around town. And that is what locals and visitors did in numbers, for the two-week duration of a festival that, in its six years of existence, has become the centre of a burgeoning Caribbean film scene.

Part of the buzz surrounding film there is down to the celebrated Scots-Canadian-Trini artist in whose studio we were. Peter Doig, who spent part of his childhood in Trinidad, returned with his family in 2002 and founded Studio Film Club with local painter Che Lovelace. Today he hosts free weekly screenings of international and arthouse films in the space where he makes work. The loft-like studio, outfitted with a large screen on one wall and a sound-system powered by huge Altec speakers procured from a now-shuttered old movie-palace nearby, harkens back to a time when dozens of such cinemas dotted Port of Spain.

Trinidad isn’t the only place whose culture was deeply shaped by film in the 20th century, but Hollywood’s impact on this island – whose first cinema, as a centenary festival exhibit showed, had been opened by a famed calypso composer in 1911, and whose great carnival steelbands were named for westerns like Desperados – was strong. “All of Port of Spain is a 12:30 show,” wrote the poet Derek Walcott of the town where he came of artistic age, attending double features in the 1950s, “some playing Kojak, some Fidel Castro.” 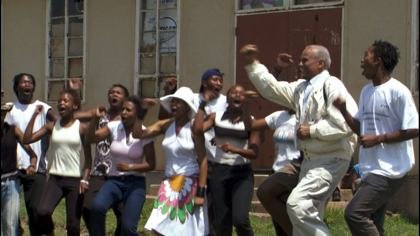 Today, Port of Spain’s firmament of old-style bijous have been replaced by a modern Cineplex outside town. Fittingly, though, the main venue for the film festival is a historic black box theatre where Walcott once staged plays. First opened by a visiting Paul Robeson in 1948, the Little Carib Theatre, recently and lovingly restored, lies in the heart of storied Woodbrook, a neighbourhood known for its calypso greats, steelbands’ “panyards”, and that other great stage for dramatic spectacle, the Queens Park Cricket Oval. It was here that the invincible West Indies sides of the 1970s and 80s trounced Mother England and all comers, giving newly independent Trinidad and its peer islands heroes of whom to be proud – as recounted in Stevan Riley’s film Fire in Babylon, which played to thrilled crowds here.

Hard to picture a more fitting venue than the Little Carib for festival hits like Riley’s rollicking documentary or Sing Your Song, Suzanne Rostock’s loving portrait of singer-actor-activist Harry Belafonte. Tracing how Belafonte turned calypso into history’s first million-selling record, and then used the proceeds to fund his friend Martin Luther King’s movement for civil rights, Sing Your Song takes its name – as its producer Gina Belafonte noted at the “Little Carib” – from advice her father’s mentor, Paul Robeson, gave Belafonte as a young man. 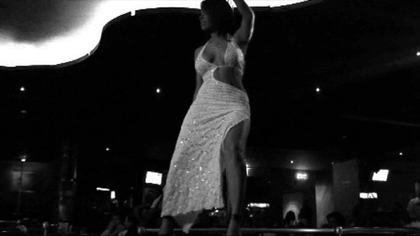 One purpose of Trinidad’s festival is to show relevant independent foreign hits that wouldn’t otherwise be screened here, where they should perhaps be seen first of all. But its main function is to help new films from or about the Caribbean and its diasporas to join the regional conversation on culture and film. And in that regard, the festival came up trumps with selections such as Jean Gentil, Israel Cárdenas’ and Laura Guzmán’s beautifully wrought portrait of a Haitian man seeking solace in Santo Domingo, which won the festival jury’s Best Film prize; strong Cuban offerings including Habana Eva, a metaphorical tale about a sweatshop seamstress choosing between two lovers, and Gerardo Chijona’s fine ‘special period’ (of severe shortages) drama Boleto al Paraiso; and Hit Me With Music, a fresh and driving portrait of Jamaica’s dancehall culture by the young Spaniard Miquel Galofré. For the young cineaste attendees of the festival’s workshops, the Mexican verité gem Tierra Madre, about a lesbian single mother in Tijuana, offered an arresting example of the art one can make with $1,000 and a magnetic star playing herself.

Among local offerings, the authoritative Trinidadian documentary ’70 was a standout. Examining the legacy of the Black Power uprisings that shook the island when a motley crew of would-be Black Castros nearly toppled Trinidad’s independence government, Alex de Verteuil and Elizabeth Topp’s expertly edited film blends archival footage and fresh encounters with its greying principles to offer an authoritative account of that titular year. It succeeds at showing how the train of events, set off by a group of students protesting their treatment at a Canadian university, were a result of global forces from outside the island. Take, for instance, the way the hopes attending colonialism’s early 1960s demise across the Caribbean turned by decade’s end into a growing disappointment, and what resulted was the popularity of ‘black power’ ideologies, inspired by the Black Panthers and Trinidadian émigré turned Afro-American revolutionary Stokely Carmichael. 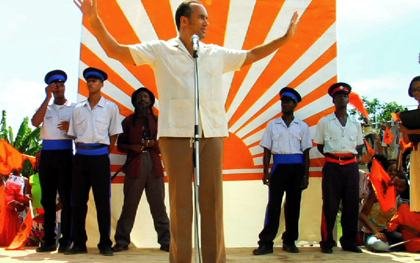 Trinidad, of course, wasn’t the only island around which those currents were flowing. As the talented Jamaican first-time director Storm Saulter showed to potent effect here with Better Mus’ Come, their pull was perhaps strongest amongst the young men of his island’s capital. In those years, Jamaica’s two main political parties – the CIA-backed JLP and the socialist-minded PNP, allegedly allied with Castro’s Cuba – vied for power by arming affiliate gangs, and flooding Kingston’s ghetto districts with guns.

The resulting violence didn’t merely inspire Bob Marley to pen some of the century’s finest songs about peace and war: it established the ‘garrison communities’ whose drug-dealing strong men still brook more sway over the lives of Jamaica’s poor than their government does – except when the government chooses to ‘crack down’ on forces it helped create, as it did during Jamaica’s own violent State of Emergency last spring. As with all Jamaican films about reggae’s golden age, The Harder They Come casts an iconic shade here, but the virtue of Saulter’s crisply shot and acted film was that it gave us potent new images through which to understand events of the near and distant past. 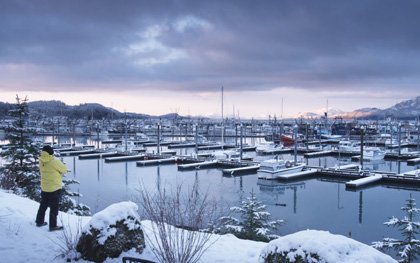 Violence and drugs, IMF corruption and the Cold War, the transformation of post-colonial euphoria into disappointment – these are defining aspects of recent Caribbean history. But for millions of its people, the historical experience that perhaps resonates most of all is their ceaseless attempt to escape hard realities by emigrating to cold northern cities. And for this reason it felt apt that my most memorable cinematic experience in Trinidad came from The Nine Muses, a film made by the London producer-director team David Lawson and John Akomfrah.

It isn’t easy sledding, either formally or visually. Consisting of stark colour-images of snowbound Alaskan vistas dotted with faceless parka-wearing figures in this whitest of landscapes, interspersed with archival footage of post-war black immigrants to the UK culled from the BBC vaults, the film is an extended tone-poem of sorts embellished by lines of verse from Milton and Joyce.

This is art-cinema – it was heading to MOMA after Trinidad – without the hand-holding of beginning-middle-and-end. But on a sunlit afternoon, David Lawson presented The Nine Muses in a darkened Little Carib Theatre, and his mum and her friends, now retired to their home island, came dressed in their Sunday best to watch what an émigré son described as he and his friends’ “gift to you”. Lawson’s mum and her friends not only sat through this riff on their experiences to the end, but were visibly moved. Stepping out then into the warm West Indian sun, any state of emergency seemed an ocean away.