Past and present alike haunted these five wilfully unmouldable finds at France’s festival of anti-formulaic anything-goes. 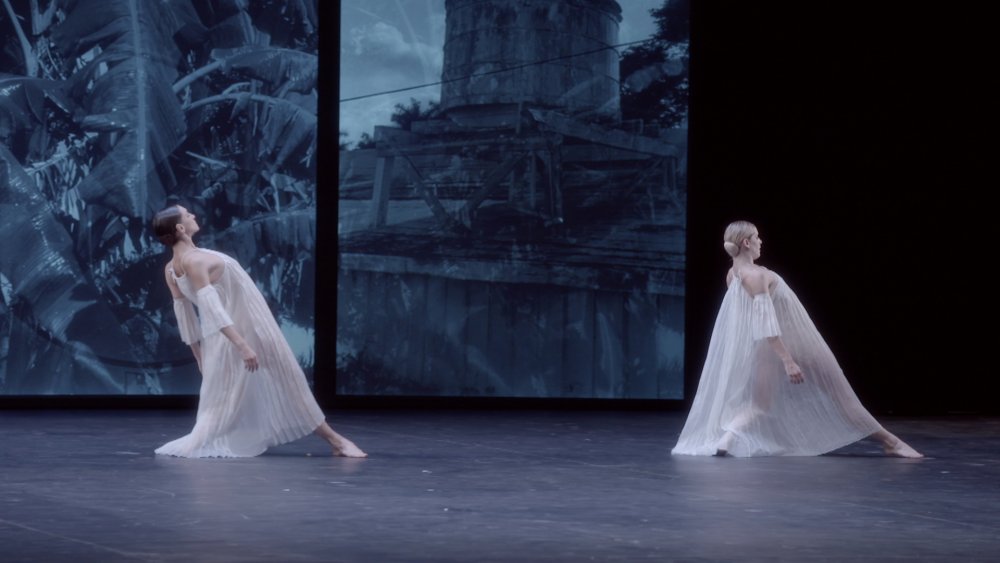 In the Steps of Trisha Brown, Marie-Hélène Rebois’s portrait of a ballet troupe learning a piece by postmodern dance pioneer Trisha Brown

When I tweeted a few months ago that FIDMarseille was the best film festival in the South of France, one Cannes devotee said I was being wilfully obscure. That’s a risk, I countered, that anyone hoping to challenge a status quo, or expand critical discourse, should be willing to take.

In any case, when the system is rigged so heavily against one side, matters of obscurity and accessibility are redundantly self-fulfilling. Now 27 editions old (the latest concluded on 18 July), FIDMarseille has a deserved reputation among cinephiles drawn to the kind of moving-image work for which more traditional means of distribution are continually elusive.

The films championed here tend to represent the fiercely autonomous end of the production scale. Free from the constraints of standardised running times and commercial viability, many films fall into that awkward durational window of 40-60 minutes; several of the festival’s juried prizes are intended to boost theatrical prospects.

If such freedoms of expression are a fundamental right, the simple enough task of embracing them became a radical imperative this year, with news of yet another dreadful terrorist attack bleeding through, on the third night of the festival, from relatively nearby Nice.

One of the reasons I enjoy FID is that under Délégué Général (and big-screen advocate) Jean-Pierre Rehm, the underlying ethos is that a film is a film is a film: there’s something provocatively democratic in screening, say, a 53-minute film as a standalone venture, or in asking juries to evaluate intensely personal works that fluctuate so wildly in length against one another. 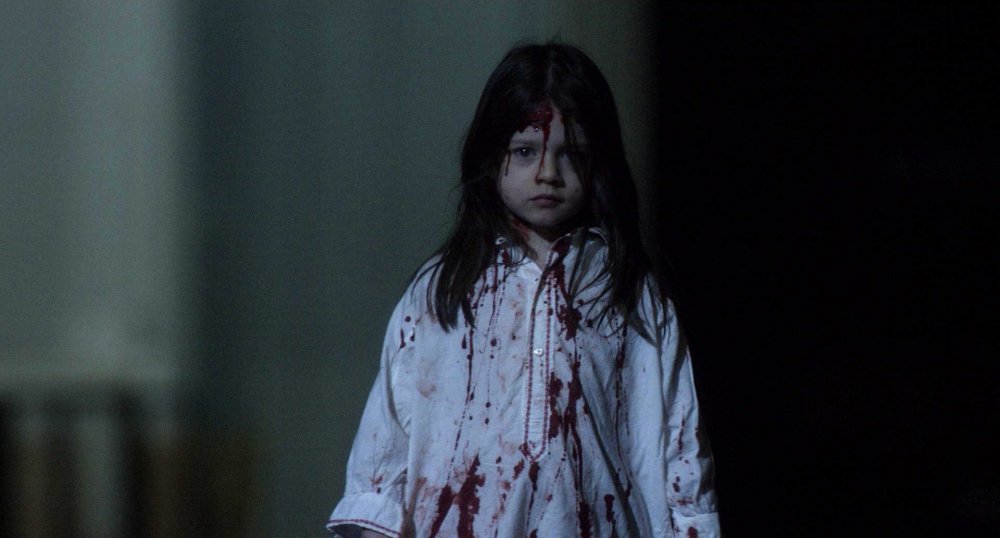 My own jury, sponsored by the Institut Français and composed of film critics, decided on this latest work by Bertrand Bonello as the best French film receiving its world premiere. It’s a beautifully controlled, tonally seductive short with a straight-up three-act story on the one hand and a teasing, tantalising, expect-anything ambience on the other. It’s a stimulating hybrid of historical essay, ghost story and site-responsive text.

In the empty auditorium of the Opéra de Paris (who commissioned the film), a musician and stage director (Reda Kateb) rehearses with his dancer, the real-life ballet extraordinaire Marie-Agnès Gillot. Their upcoming opera is to trace the curious life of Sarah Winchester (1840-1922), who in 1881 inherited riches accrued from her deceased husband’s Winchester Repeating Arms Company, manufacturer of ‘the Gun that Won the West’.

Bonello, a long-time proponent of the macabre and an absolute master of mood, knows that with a running time of 24 minutes there’s no time to waste. Onscreen inscriptions, stamped bluntly over the unfolding action (careful zoom-ins, cut-aways to gruesome ink illustrations), provide a curiously scientific overview of Winchester’s misfortune-laden life: the death of her daughter, aged nine days, from a degenerative disease in 1866; her husband’s death from tuberculosis a year after that of her father-in-law; the legendarily ceaseless, 38-year expansion of her San Jose home from 1884 to her death.

This last project, an attempt to house the thousands of restless spirits (lives claimed by the Winchester rifle) she was convinced had cursed her, led to corridors folding in on themselves and doors leading to nowhere. So it is with Bonello’s film: in the aggressively nonchalant way in which he re-maps Winchester’s life to the haunted/haunting fabric of his found location, the Frenchman teases at multiple possibilities.

America’s evolution of firearms and the present state of its ordnance industry is the stuff of true horror: it’s hard not to watch Bonello’s film without thinking of the familiarity of such weaponry in the particularly pertinent context of a Parisian/French cultural space. The director’s own electronic soundtrack, a suggestive synth of bullet-point malice, blends with the choral harmonies of an in-house choir to lend a truly operatic sense of doom to the tortured movements of Gillot – a remarkable performer whose bodily convulsions find their visual metonym in a bare back resembling an atlas of taut, shadowy wires.

In the Steps of Trisha Brown 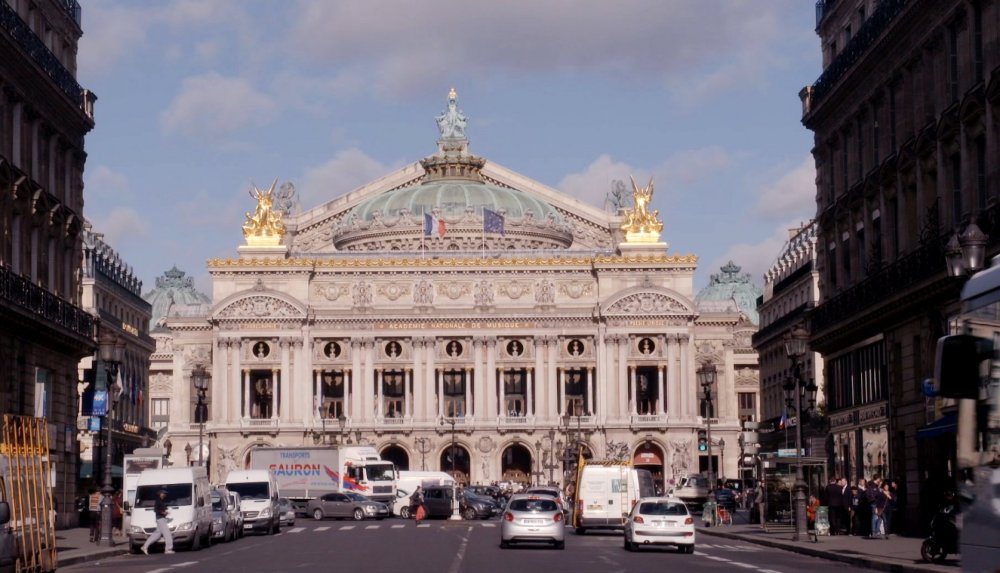 The anxious severity of Gillot’s gestures find counterpoint in those of Lisa Kraus, the de facto protagonist of In the Steps of Trisha Brown, a new documentary by Marie-Hélène Rebois. Unveiled in the French Competition, Rebois’s latest is a 79-minute study of a Ballet de l’Opéra troupe learning Glacial Decoy, an 18-minute performance choreographed in 1979 by postmodern dance pioneer Trisha Brown.

Kraus, with fellow teacher Carolyn Lucas, is a disciple of Brown’s school of dance, and her centrality to Rebois’s film gives it its infectious, unpretentious, accessible likeability. Telling her students just how important paradoxical notions of balance were to Brown’s concept of expression (turning the back leg one way, swaying the arms another), Kraus communicates in an easygoing manner. Rebois matches her methods with an observational eye that is equally unpretentious, allowing the repeated rhythms of the dancers’ movements to reveal themselves in long, uninterrupted sequences shot from the corner of the room.

Though it’s aesthetic-miles away from Bonello’s film, Rebois’s also carries an undercurrent of ghostliness. It’s not just in the archival footage seen here, of Brown performances such as Man Walking Down the Side of a Building (1970) – whose illusion of effortless, gravity-defying grace depended on enormous control and a great deal of core strength. It’s also in the absent figure of Brown herself: I had to do some research to discover she is still alive, sadly afflicted by Alzheimer’s and incapacitated by a series of mini-stokes at the beginning of this decade. For Kraus and so for Rebois, however, Brown is a reference point for whom only the present tense will do. 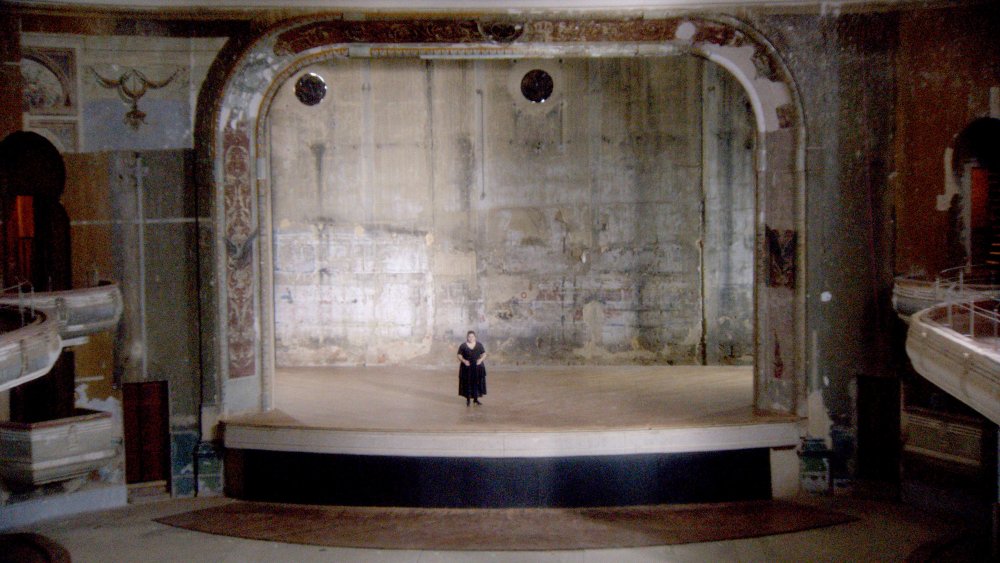 Performance and expression are also in some way haunted, burdened and – eventually – sublime in Laura Huertas Millán’s powerfully intimate, 43-minute Sol Negro (Black Sun). Opening on the warm-up exercises of a singing lesson, this deeply intriguing character study focuses on Antonia, a classical singer who, we gradually infer, is recovering from a suicide attempt. In the end credits we also discover that the actress, Nohemi Millán, shares her surname with the director, as well as with another principal performer: indeed, Huertas Millán, a graduate of both the Ecole Nationale des Beaux-Arts de Paris and Le Fresnoy, has painted a searingly intelligent family portrait – of her own mother and aunt, and of individual suffering experienced collectively (the director herself also appears).

The France-based Colombian – who is also currently a fellow at Harvard’s Sensory Ethnography Lab – confidently withholds a lot of information from her viewers. But her rigorous retention of a tonal ambiguity, through spatially distant but optically claustrophobic camera set-ups, is quietly riveting. One scene, in which Antonia weeps her way through dinner – the camera unflinching in its attention to her mascara-strewn face – is particularly intense, precisely because it seems to both complicate and confirm the film’s fictive foundations.

Perhaps unfiction is the word: embodying the kind of narrative and textural space in which FID, at its best, specialises, Sol Negro is extraordinary filmmaking, even before its astonishing coda – in which Antonia belts out a heart-swelling aria in a disused theatre space. Huertas Millán and cinematographer Jordane Chouzenoux manage to light and frame the proscenium in such a way that, until the protagonist appears, I thought it was a miniature set – the kind that would show up, say, in a British-era Hitchcock picture. 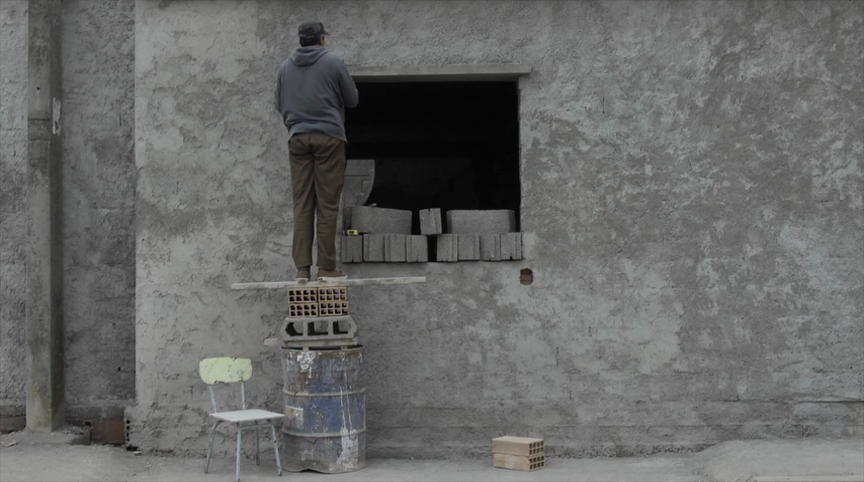 Sol Negro received a deserved special mention from the French Competition jury. One of the multiple winners during the closing awards ceremony – including the Best First Film Prize, and a special mention from us – was Atlal, by Djamel Kerkar, an Algiers-born graduate of the School of Visual Arts in Marrakech. True to its title, Atlal opens on ruins, with a zoom-out from an old, discarded boot shot on since-degraded VHS. Such footage was captured in Ouled Allal, a hamlet of 8,000 people ten miles south of Algiers, which the Armed Islamic Group (GIA) brutally assumed as its headquarters at the beginning of the Algerian Civil War – before the government flattened it with air strikes in 1997, soon after the GIA had massacred two nearby villages.

Examining three generations of men who returned to Ouled Allal at the end of that devastating conflict in 2002, Kerkar reveals a quasi-urban infrastructure physically and psychically traumatised by obliteration. Though Kerkar’s carefully composed digital camerawork is in sharp contrast to his fuzzily-textured prologue, the change in image quality only serves to illustrate that this is, despite any existential resilience on display, a barely-changed hellhole. For Kerkar’s subjects, the past, present and future must co-exist: theirs is a struggle against annihilation, an everyday, quotidian battle in which the mere presence of old photographs (which a gentle breeze threatens to blow away), or a song played on a mobile phone by firelight, is revelatory.

A Model Family in a Model Home 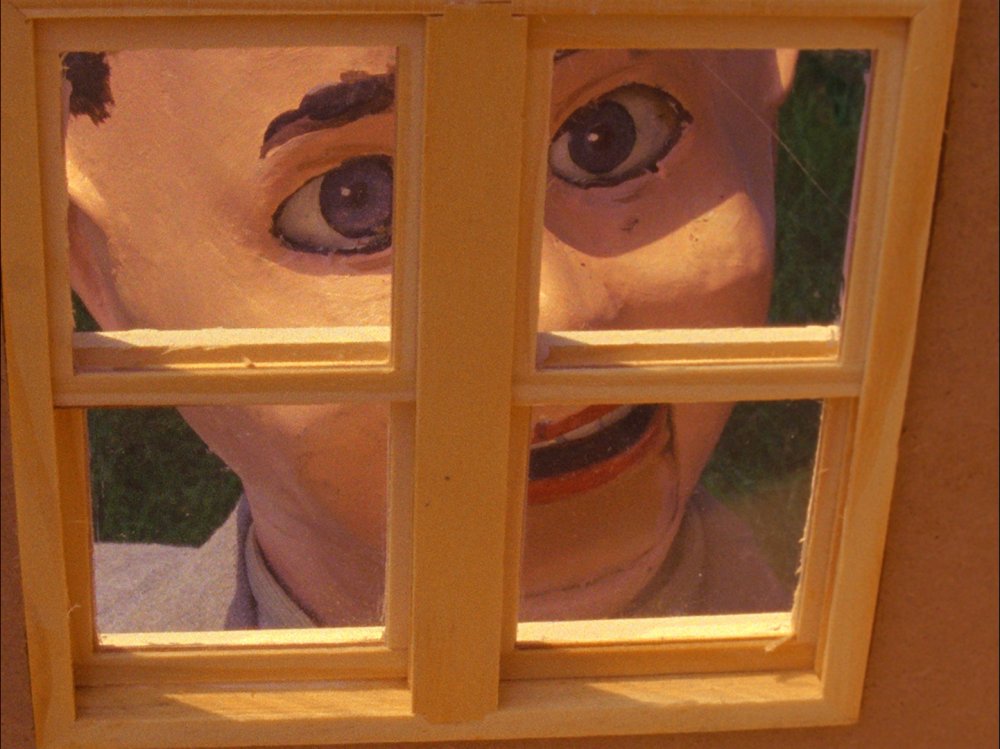 Of the good-to-great films I saw at FID this year, however, perhaps the conceptually and tonally oddest was Zoe Beloff’s A Model Family in a Model Home. Across 22 minutes, this idiosyncratic 16mm short traces Bertolt Brecht’s short-lived film career in Hollywood, opening with his testimony at the HUAC hearings in 1947 (actual audio, sketched illustrations), and then jumping back to 1941, when he first arrived in Los Angeles and was inspired by an article in Life magazine to write a screenplay.

Brecht’s film, a kind of ghost project, was to be centred around a model Midwestern family, whose home would be transformed into an actual film set with round-the-clock audiences looking in. Beloff tells us all of this in voiceover – sometimes her own, sometimes that of actor Vladimir Weigl as the playwright – and shows a papier-mâché Brecht peering into a miniature house (constructed by cinematographer Eric Muzzy). A short lesson follows, via David Harvey, on housing models in America. And it ends with a light-hearted song.

Beloff, born in Edinburgh but based in New York since 1980, has been making films for 30 years. Given the titles of some of her other works (Two Marxists in Hollywood, The Days of the Commune), I’m ashamed to say this is the first time I’ve encountered her work. Such is the way at FID, a place of expanding horizons, of judgement-free discovery – and of experiments.