Ryan Gosling delivers the most mature performance of his career as Neil Armstrong in Damien Chazelle’s fourth feature, a film that manages to make the iconic Moon landing story feel fresh again.

How do you make a story dramatic when everyone knows the ending? When they know the script and the best line is one of the most recognisable quotes in history? The 40 years that have passed since the Moon landing have seen the Apollo mission celebrated as the apotheosis of human endeavour, but its iconic status also creates a retrospective illusion of inevitability. From Kennedy’s 1962 pronouncement – “we choose to go to the Moon” – to the planting of the Stars and Stripes in lunar soil a mere seven years later, the greatest adventure has become another chapter in manifest destiny; an item ticked off humanity’s bucket list. So, it’s a testament to the effectiveness of Damien Chazelle’s astonishing new film First Man that, by the time we get to the Moon shot in the final act, we’re as tense as Mission Control, helplessly watching, as controls are toggled, alarms sound and the lunar surface rushes beneath the decidedly rickety-looking landing vehicle.

Adapted by Josh Singer (Spotlight, 2015) from James R. Hansen’s biography, Chazelle’s fourth feature focuses tightly on Neil Armstrong, played by Ryan Gosling (co-star of Chazelle’s 2016 film La La Land). It’s 1961 and Armstrong is a test pilot, flying so high above the Mojave desert that he bounces off the atmosphere. The jet feels like a death trap and cinematographer Linus Sandgren places us in the cockpit, immersing us in the peril. Back home, tragedy awaits as Armstrong and his wife Janet (Claire Foy) come to terms with their young daughter’s terminal cancer. The storytelling here is elegant, avoiding schmaltz and unfussily portraying a family in pain.

Throwing himself into his work, Armstrong tries out for the Gemini programme and is soon proving his right stuff, alongside fellow recruits Ed White (Jason Clarke) and ‘Buzz’ Aldrin (Corey Stoll), under the tutelage of Deke Slayton (the ever-dependable Kyle Chandler). From the mundane – a fly buzzes in the capsule; a food packet has gone mushy – to the deadly – a terrifying fire – things frequently go wrong, and even when they succeed, they do so rattling along the edge of going wrong. And there’s a lot of rattling. Mary Ellis’s sound design emphasises metal under stress and the fragility of the flying contraptions, a counterpoint to Justin Hurwitz’s impressive score. 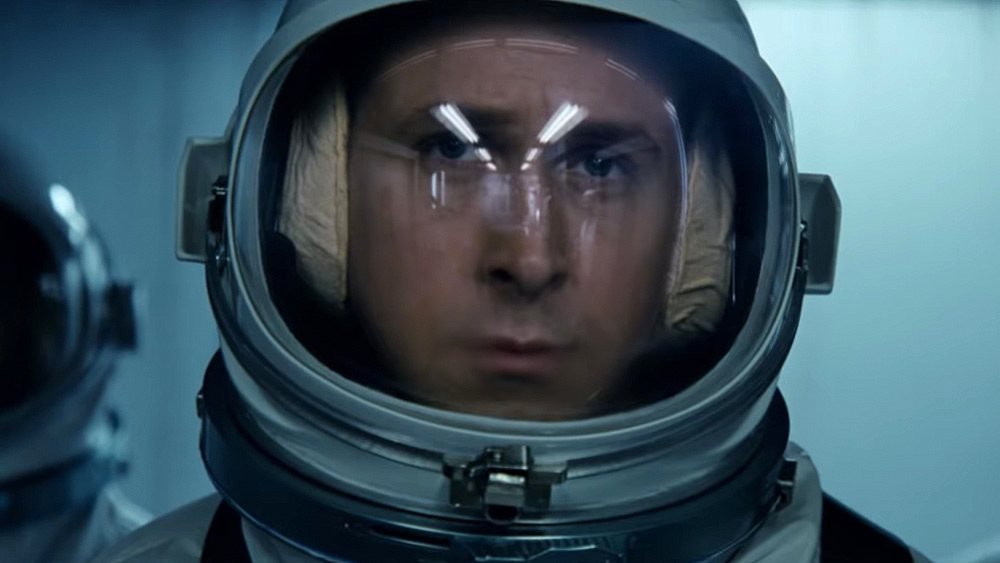 With time passing and Vietnam in full swing, the nation is losing interest in space – Gil Scott-Heron sings of Whitey on the Moon – and NASA scrabbles for tax dollars, but more than the historical sweep – perhaps taking a cue from his protagonist’s engineering background – Chazelle focuses on the nuts and bolts of his story. Literally so In one instance, as an apprehensive Armstrong stares fixedly at the screws holding his ship together while the giant booster rockets ignite beneath him. Likewise, Armstrong’s family bends under the strain.

With the most mature performance of his career yet, Gosling tracks the trajectory of a man becoming a legend. The easy charisma of the young man – a maths problem is “neat”, he tells Janet – gives way to an increasingly distant commander, who talks to his children as if fielding questions in a press conference. Foy is likewise superb as a woman increasingly unwilling to accept the limited role of the astronaut’s wife.

Nods to Apollo 13 (1995), The Right Stuff (1983) and even 2001: A Space Odyssey (1968) notwithstanding, with First Man Chazelle has created a unique work, a breathtaking true life adventure story: an intimate epic which is as fascinated by the small steps as it is exhilarated by the giant leap.