The filth and the fury: Taxi Driver, the Ramones and the spirit of 76

Lobbed from the gutters of 1976 New York, Martin Scorsese’s Taxi Driver was a film wound tight for hard times. Jon Savage finds echoes of its nihilism and rage in the Ramones’ contemporaneous debut album. 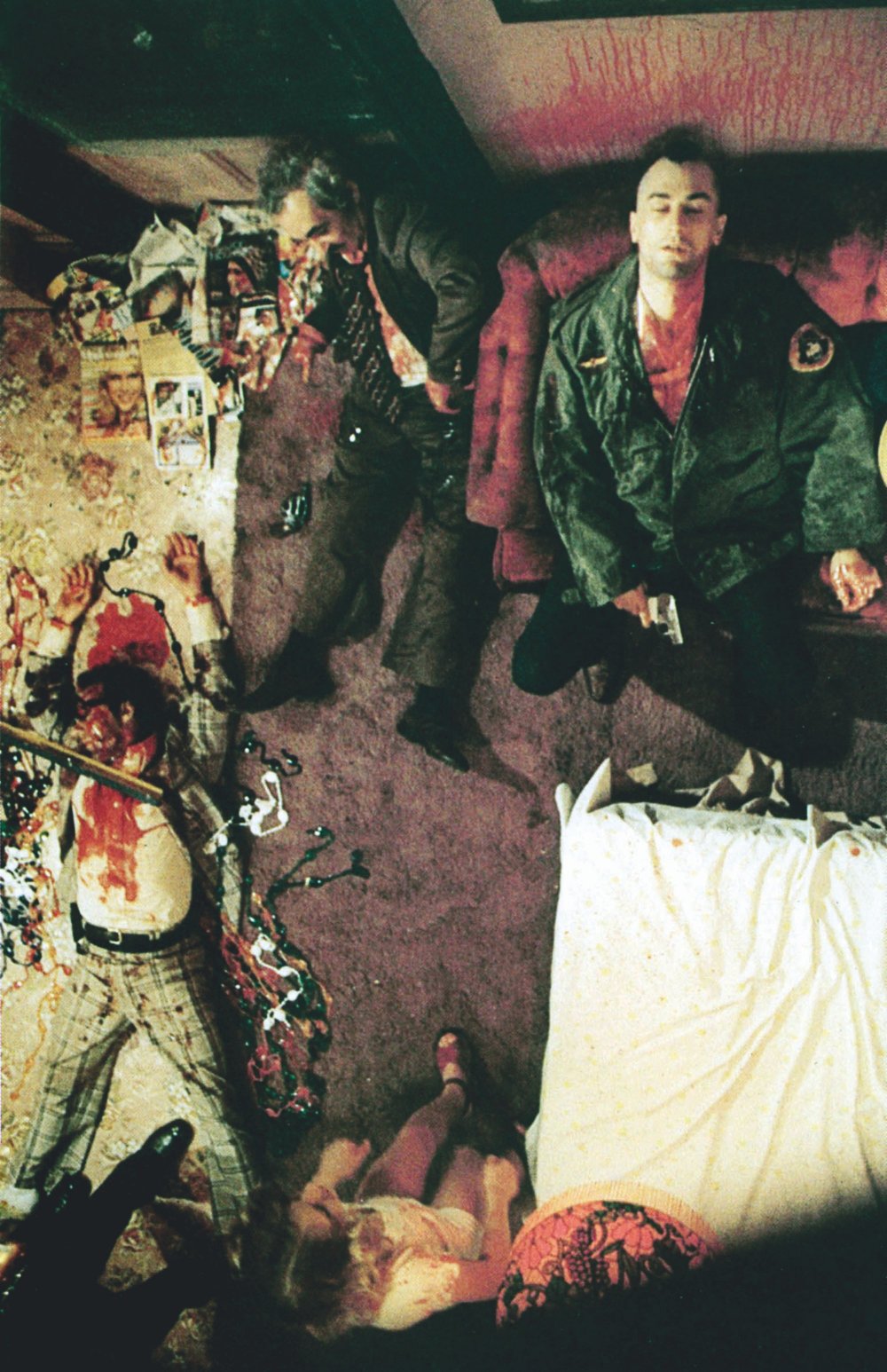 “I just wanna go out… and really –
I really wanna –
I got some bad ideas in my head. I just –“
— Robert De Niro as Travis Bickle, Taxi Driver (released February 1976)

A two-month Martin Scorsese retrospective runs at the BFI Southbank through February 2017.

Taxi Driver is re-released in cinemas around the UK from 10 February 2017.

Forty years since its American release, Taxi Driver now seems to mark a pivotal moment in American and indeed Western culture: a warning of the ﬁnal foreclosure on 70s hedonism and an uncanny prediction of the alienated loner – the dark side of the cowboy/vigilante ﬁgure – who has since become a terrorist archetype. Previous ﬁlms had dealt with the vigilante trope – most notably the Dirty Harry series (1971-) and Michael Winner’s Death Wish (1974) – but these avengers operated from within society, within the structures of marriage or police work. They had something to lose, even if it was just a badge.

In contrast, Travis Bickle (Robert De Niro) is completely alienated, if not damned: “Loneliness has followed me my whole life, everywhere. In bars, in cars, sidewalks, stores, everywhere. There’s no escape. I am God’s lonely man.” His diatribes against the decadence of New York – scripted, with perfect economy, by Paul Schrader – have become justly famous, but then the alternative on offer is just as bleak: as Wizard (Peter Boyle), the nearest thing he has to a conﬁdant, tells him, “I envy you your youth. Go on, get laid, get drunk. Do anything. You got no choice, anyway. I mean, we’re all fucked.”

Living alone in a squalid apartment, Bickle is desperate for connection. But he can only see women as Madonnas or whores. In the ﬁlm’s most excruciating scene, he takes the fragrant Betsy (Cybill Shepherd) to the cinema, but it’s a sex education/soft porn ﬁlm. She is, quite rightly, revolted, but he doesn’t get it, at all. After treating the Madonna like a whore, he tries to rescue an actual prostitute – Iris (Jodie Foster) – with devastating results. Even here his fantasies fail: the icy cool Dirty Harry ﬁgure quick-drawing in the mirror is replaced by a messy, drawn-out gun battle in a tenement hall – a squalid bloodbath. 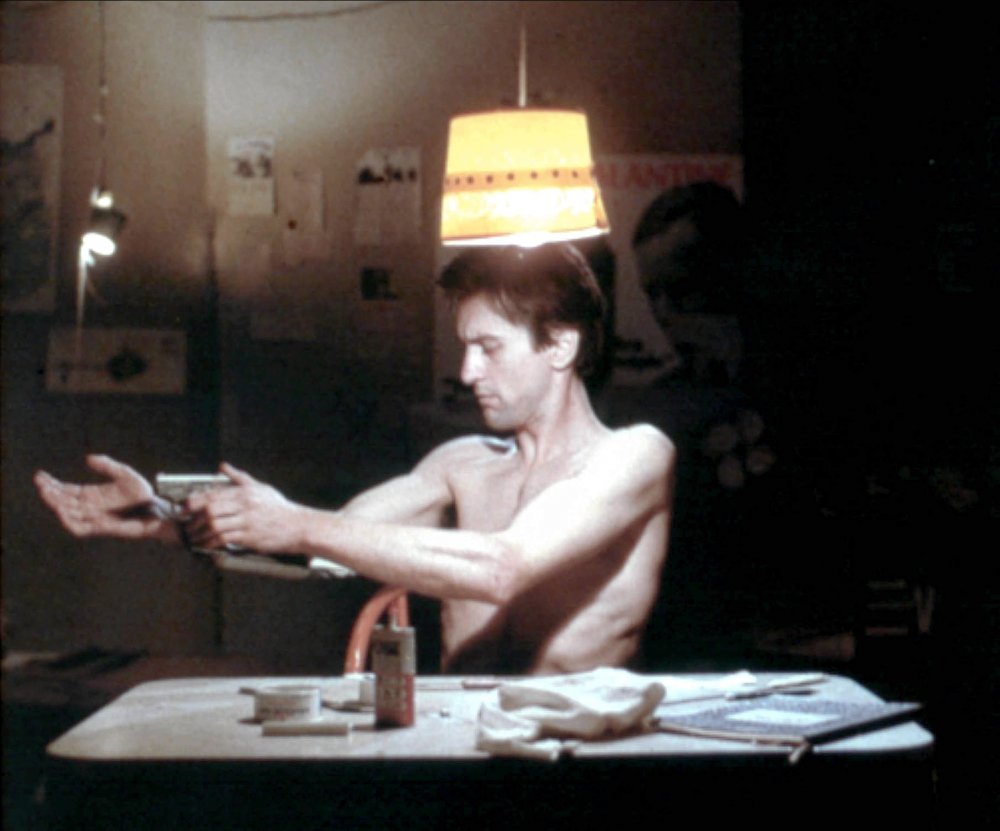 A massive success at the time – with takings estimated at $21 million by the end of 1976 from a budget of $1.3 million – Martin Scorsese’s direction of Taxi Driver resembles a fever dream with the city of New York cast as its real star: a glistening, flickering, neon-saturated nightmare. The streets are filled with people promenading, jostling, ﬁghting, shouting, selling things and selling themselves. With hoardings and illuminated signs proclaiming serial killers and twisted sex (The Texas Chain Saw Massacre meets Anita: Swedish Nymphet) the environment is a chaotic charnel house of desire that promises everything and delivers absolutely nothing.

All the buttons are being pressed: mayhem, murder, sex as the ultimate expression of consumerism. The whole thing has got out of control. Bickle presents himself as a Yukio Mishima-type ﬁgure bent on puriﬁcation – not only of society but of the self – but he is a reflection of that degraded environment: popping pills, eating junk food, transcending the rhythms of nature in his night-time wanderings. He is all out of kilter, and even his grand ﬁnale is botched: he ends up killing, not the presidential candidate Charles Palantine – a plot line that reflects the script’s origin in the story of Arthur Bremer, the would-be assassin of George Wallace – but three no-mark gangsters, hustlers, pimps.

Taxi Driver is all of a piece: it’s pretty much perfect, even down to the circular dream ending. What’s interesting now is just how the ﬁlm’s overlay of nihilism (“We’re all fucked”) rings all kinds of different bells: in his brutally cropped hair and square shades, Bickle prophesies punk. The fact that he writes down his thoughts – like Bremer and the killers who would follow – gives the ﬁlm a strong rationale, if not ideology: Bickle’s eventual rampage is not a random spasm but a course of action that is thought through, that is understandable given the ﬁlm’s logic, and that was being reflected elsewhere in New York at the time. 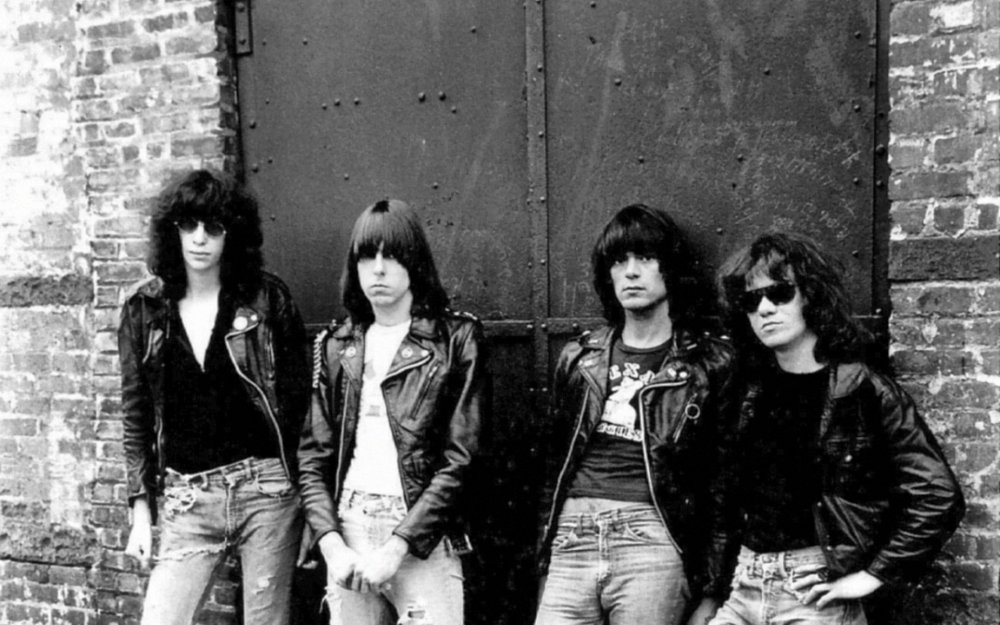 Between the ﬁlm’s preparation, script editing, production and eventual release in 1975-76, the Ramones were busy recording: at ﬁrst two sets of demos in 1975, then – in February 1976, almost exactly on the ﬁlm’s US premiere – the 14 tracks that appeared on their ﬁrst album, Ramones. On the monochrome album cover, the group was pictured – by photographer Roberta Bayley – in a grafﬁti-strewn Bowery back alley looking like delinquents and hustlers: inside, the record was saturated in a New York sensibility given an explicit location on the key track 53rd & 3rd – a murder fantasy prompted by sexual shame and guilt.

Between them, the Ramones recordings and the Taxi Driver production process encompassed the following events: the fall of Saigon in April 1975 and thus the ending of the Vietnam War (it’s no accident that Bickle and the protagonist of 53rd & 3rd are Viet vets); two separate assassination attempts on President Ford in September 1975, by Charles Manson acolyte Squeaky Fromme and Sara Jane Moore; and the speech by Ford refusing to allow federal assistance to spare the city of New York from bankruptcy, paraphrased in the immortal Daily News headline Ford to City: Drop Dead.

Like several other inner cities that would incubate the new aesthetic – Cleveland, London, Paris – New York was a forgotten town in those days. In late 1975, the future ﬁlm director Mary Harron was living on 14th Street in Manhattan: “I remember standing at windows, looking out over the Lower East Side, and feeling that the whole city was infested, and crumbling, but wonderful. There was nihilism in the atmosphere. Longing to die. This sounds pretentious, but part of the feeling of living in New York at that time was this longing for oblivion, that you were about to disintegrate, go the way of the city. Yet that was something almost mystically wonderful.”

In late 1975, she interviewed the Ramones for the ﬁrst issue of Punk magazine: “I had no idea whether it was good or bad, whether I liked it or not, except that it was completely extraordinary, I’d never seen anything like it. I couldn’t believe people were doing this. The dumb brattiness: ‘Beat on the brat with a baseball bat’ – this at a time when it was, what? King Crimson. It was comic, and yet you’re in a real place, you want to do something real, so you’re in a situation where they could be real, they could be genuinely delinquent. It had an edge to it. And they looked dumb-smart, smart-dumb.” 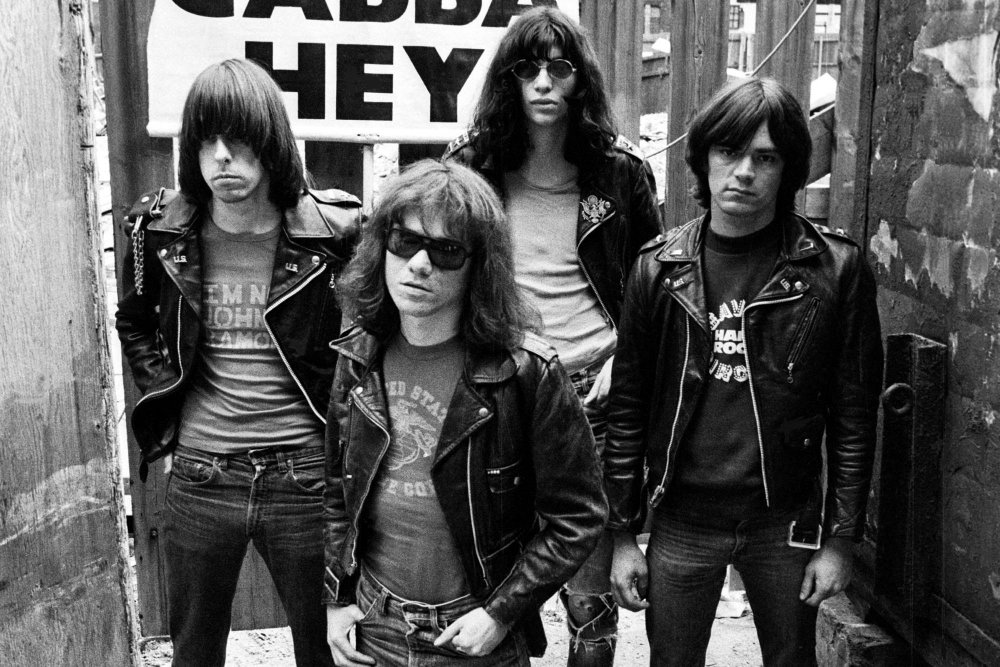 Like Taxi Driver, Ramones had no truck with hippie pieties: that era was over. The record’s lyrics mashed up extremist acronyms – the CIA, the SLA (the Symbionese Liberation Army) – with horror references (The Texas Chain Saw Massacre), totalitarian imagery (“I’m a shock trooper in a stupor”) and a deep sense of disgust (“Don’t it make you feel sick?”). Both displayed a right-wing polemic against liberals and the flotsam of commercialised hippie culture: against hang loose and let it all hang out, coke, suede and waterbeds. That had led to a kind of decadence, not just sexual and social, but – almost even worse – that of artistic self-indulgence.

Both Taxi Driver and Ramones were wound up tight: stripped, hostile, confrontational, deliberately shocking. Even so, the ﬁlm made enough of the compromises – in particular the ending that suggested redemption even though it was, to the careful viewer, completely unresolved – that allowed it to become successful: it was number one at the US box ofﬁce for three weeks in February 1976, and for two more in late March and early April. In contrast, the Ramones’s debut stalled at number 111 on the Billboard chart and did not go gold until 2014, yet its impact on British punk was incalculable after their visit in summer 1976: after Ramones, the acceleration.

Taxi Driver was released in the UK in September 1976, several months into the British punk scene, already kickstarted by the Sex Pistols – another stripped, confrontational aesthetic that mirrored hard times. Both New York artefacts now seem extraordinarily prescient: if Ramones changed the sound of rock music, then Taxi Driver presaged the arrival of the taxi-driving serial killer – David Berkowitz, the Son of Sam, who committed his ﬁrst murder in July 1976. In May 1977, he sent a letter to the New York Post that read like a Travis Bickle out-take: “Hello from the gutters of N.Y.C. which are ﬁlled with dog manure, vomit, stale wine, urine and blood.” 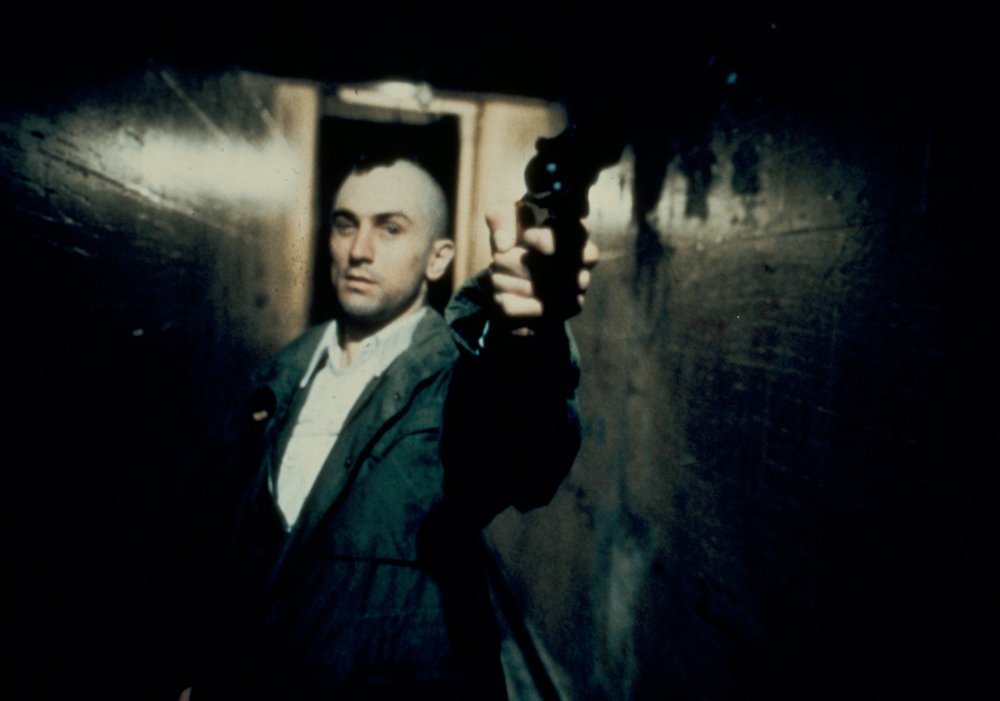 Both rehearsed the right-wing politics that would overtake the West by the end of 1980. As Harron says about New York punk, “People needed to say something that negative, there was something liberating about that negativity. It was so hard and cold, and glitter was the end of something, and this was a search-and-destroy aesthetic.” The Ramones themselves included a mixture of political positions – singer Joey Ramone was left wing, guitarist Johnny Ramone a rabid Republican – but their insistence on telling uncomfortable truths led them to an extreme position that was quickly softened in their attempts for mainstream acceptance.

If Ramones accelerated the pace of ﬁrst wave punk, then Taxi Driver gave it the look that spread throughout the UK and the US from 1979 on. Bickle’s descent is marked by his hair: ﬁrst, a moderately short 70s cut, then a brutally cropped effort and ﬁnally – as he goes out to kill – a full-blown Mohawk/Mohican. The links to the US military and Native Americans were deliberate: this was a ceremonial war cut, meant to mark the warrior and the outcast. Seen in 1976 before its more general take-up, against the flares and deco patterns of the crowd at the Palantine rally, Bickle’s Mohawk looked profoundly weird and separate, if not actually deranged.

Lacking even the Ramones’ cartoony black humour, Taxi Driver is even more brutal. It still casts a dark spell. Bickle now appears as the ﬁrst mainstream cultural appearance of a line that has continued through the Oklahoma bomber Timothy McVeigh, the Unabomber, any number of school shooters and beyond. He is a reminder – from almost an adult lifetime ago – that extreme alienation can turn outward into a cosmic rage: “Listen, you fuckers, you screw-heads. Here is a man who would not take it anymore. A man who stood up against the scum… the cunts, the dogs, the filth, the shit. Here is someone who stood up. Here is – you’re dead.”

Related to The filth and the fury: Taxi Driver, the Ramones and the spirit of 76