Nine discoveries from the 2020 Berlinale

First word on some of the striking debuts and other strong finds in the notoriously wide-ranging Berlin Film Festival. 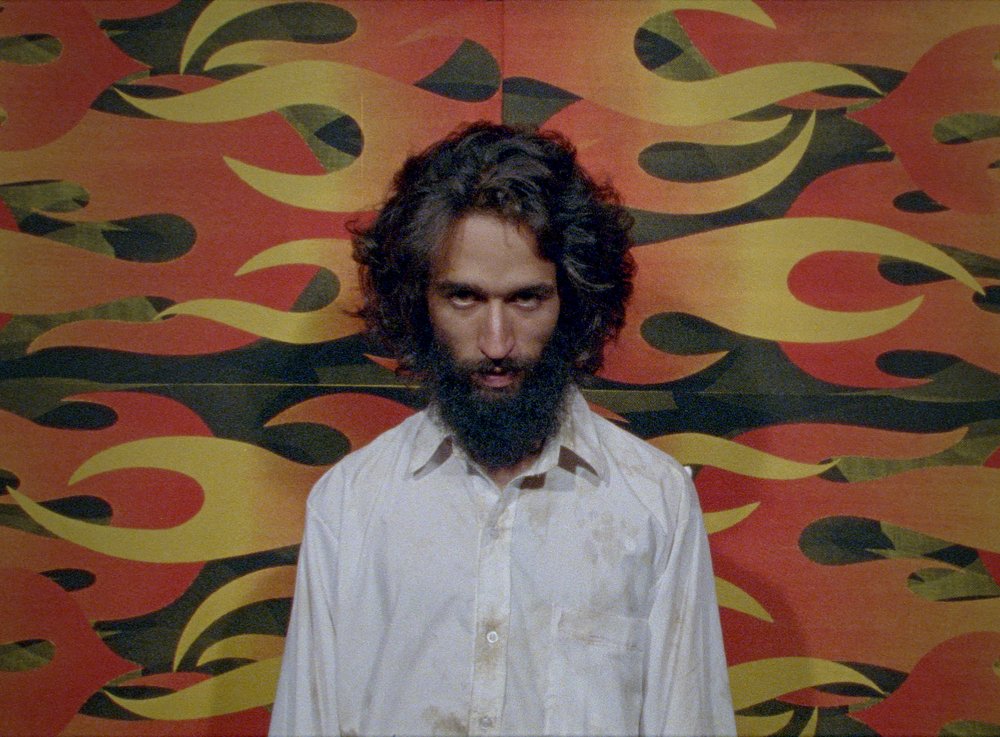 Camilo Restrepo’s depiction of the Colombian criminal underworld in his debut feature could be set at any moment in time. It might be looking to the country’s mournful past – through the tactile nostalgia of its 16mm lens – to the present through its colourful use of familiar logos and commercial paraphernalia, or even to the future, given its post-apocalyptic narrative looseness. In any case, Los Conductos is a potent, angry, stylish 70-minute rail against structural injustice.

Inasmuch as it has a story, the film follows the vagrant Pinky on the run from the faceless ‘Padre’ and his criminal cohort. Pinky is a Christ-like figure, all skin, bone and beard in Luis Felipe Lozano’s portrayal. His obscure narration is laced with idioms and metaphors, but Restrepo’s assured control of imagery gives the film thrust when its narrative is unclear – match-cuts, long takes and saturated colour maintain suspense, drama and even gentle humour.

Los Conductos is an inventive, elusive work, catalysing righteous outrage to create propulsive entertainment. Restrepo proves himself an artist with focus, making clear his intent while leaving the viewer space to search for deeper meaning.

The Trouble with Being Born 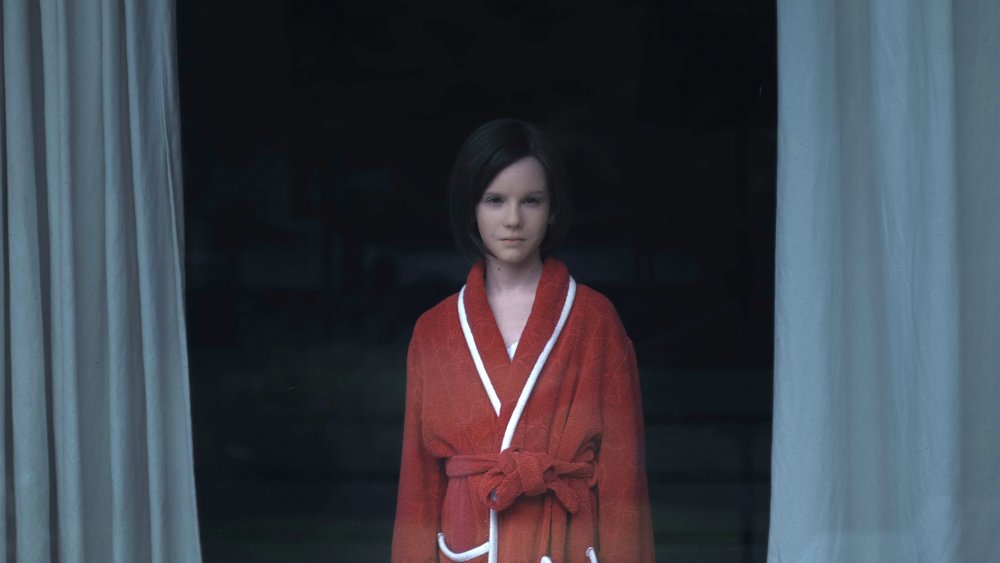 Artificial intelligence has never felt as brutalising as it does in this second feature by Austrian filmmaker Sandra Wollner. During a hot summer, a pale, elf-like girl called Ellie idles at her home pool, beside her beloved Papa. But their bond is sexual, and Ellie turns out to be an android, locked in an imperfect code that fails with each human cruelty. When Ellie gets lost, then is picked up and programmed for a new role, living with an elderly woman who needs yet fears her, she struggles to piece together what happened and which memories are truly hers.

In Wollner’s uncompromising movie, Ellie’s consciousness is the embodiment of Plato’s Cave: humans are but shadows in her mind; she can never grasp or reach them. As her cognitive and visual abilities fail and her pixelated world splinters, she becomes more a haunted, colonised subject than a humanoid stand-in or an efficient machine. The film’s stunning, tactile sound design by Peter Kutin and the eerie cinematography by Timm Krüger beautifully convey the idea that the greatest thing we must fear from AI is ourselves. 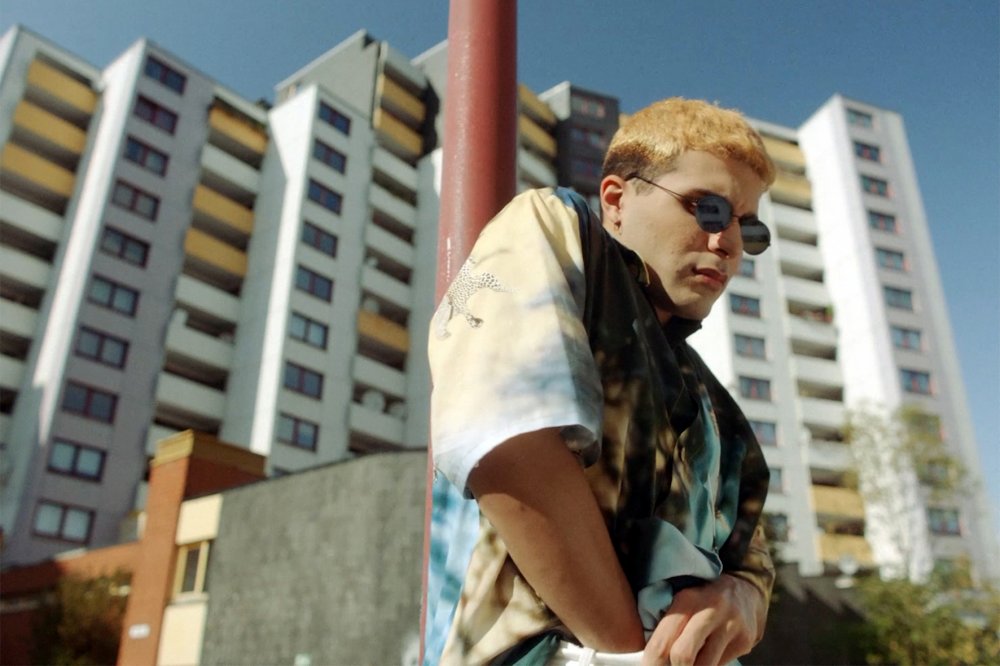 Faraz Shariat’s semi-autobiographical debut – the sparkiest work at the 2020 Berlinale, where it won the coveted Teddy Award – focuses on Parvis (Benjamin Radjaipour), a gay twenty-something second-generation Iranian who lives in a quiet Hannover suburb with his homesick folks (played by the director’s own parents). With his bleach-blond hair and penchant for skin-tight neon T-shirts, Parvis has no problems expressing his queerness; his Iranian identity is another matter.

When this middle-class club-kid is ordered to serve community service at a local refugee detention centre, he starts to realise how easy life has been for him in Germany. It’s here that Parvis meets – and quickly falls for – Amon (Eidin Jalali), a brooding hunk who’s not quite as blithe about his homosexuality, especially around his macho bros at the centre.

Shariat also shuffles in home video from his own childhood, including a sweet dance performance dressed as cult anime heroine Sailor Moon (one of many pop-culture references that pepper the film). Such an effusion of stylistic flourishes is a common misstep in debuts, but here it makes total sense. Like its characters’ identities, No Hard Feelings’ aesthetic is always shifting. 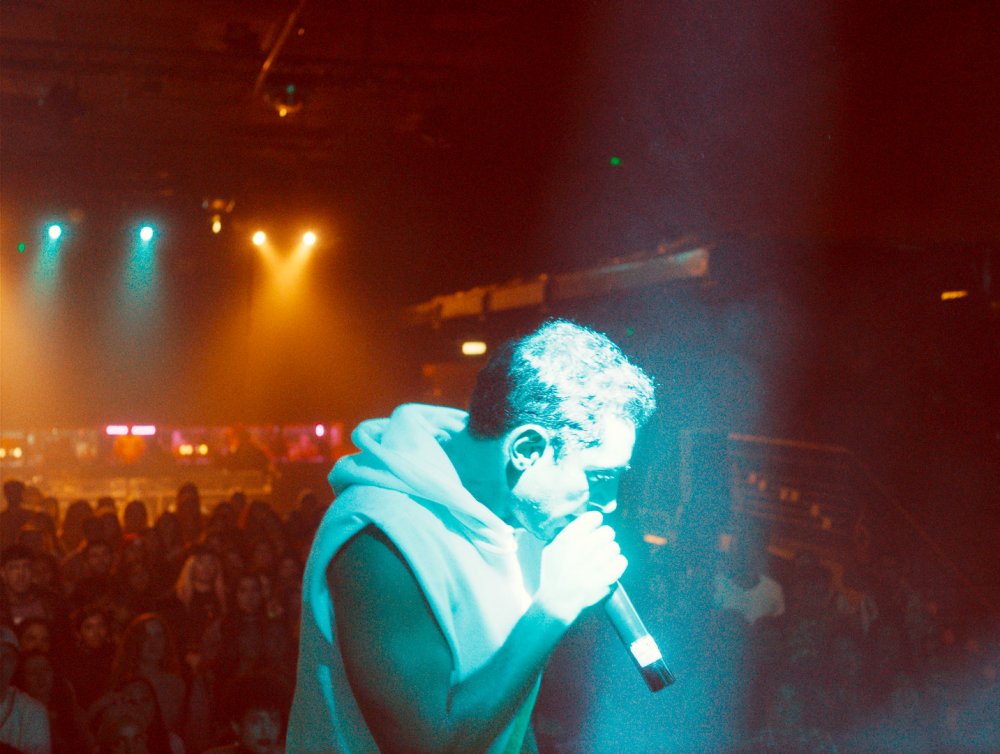 Having played a drummer who loses his hearing in Sound of Metal (2019), Riz Ahmed steps into a second consecutive lead role as a musician suffering urgent health issues. He plays a British-Pakistani rapper named Zed who’s on the cusp of a major tour and superstardom when he’s hospitalised with an autoimmune condition after a visit to his London family.

Ahmed also produced and co-wrote the script with American director Bassam Tariq, researching autoimmune conditions and drawing on experiences from his own life to make a lean and highly personal piece that has the air of veracity. Aside from illness and the spectre of his MC-ing career drifting away, Zed has to deal with familial issues both frivolous and serious. A family meal early on is full of as many zippy jokes and insults as entrees, while the conservative values of father Bashir (Alyy Khan) provide typical moments of generational clash. He’s also haunted by dreams that touch on Sufi mysticism, possibly as a consequence of unstable thinking relating to his stalled career, his enforced hospitalisation or both.

Tariq’s film is a funny and fresh look at identity, parental and societal conflict and the age-old struggle of trying to achieve one’s dreams. 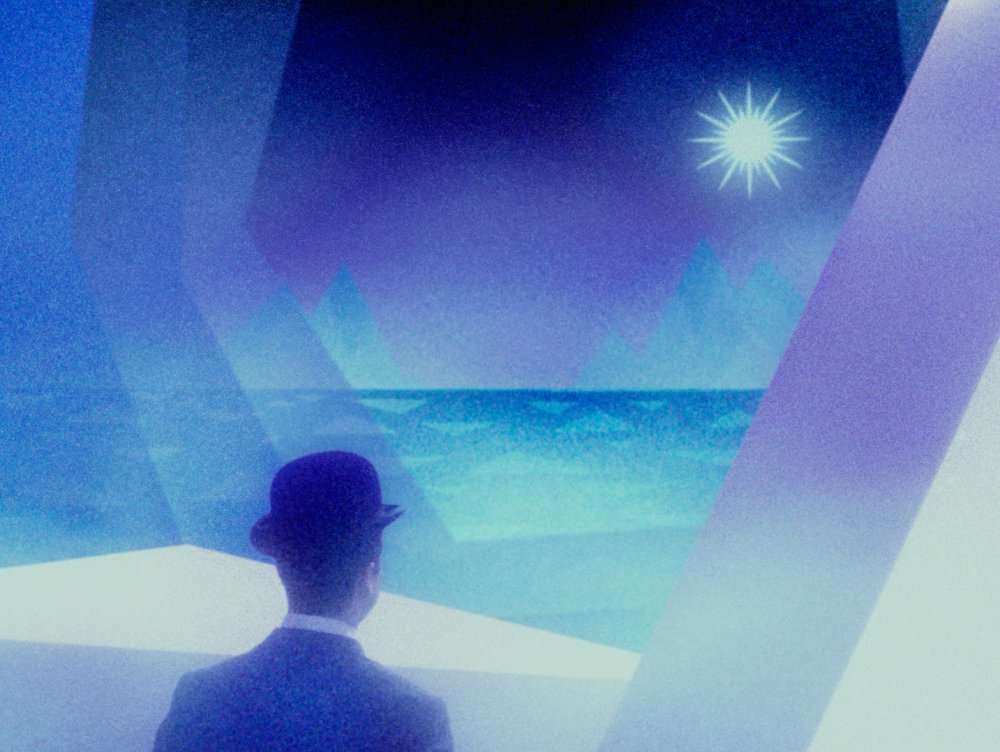 Set in 1899, Matthew Rankin’s gonzo take on the early years of Canada’s longest-serving Prime Minister, William Lyon Mackenzie King, is a historical biopic like no other. We follow a fresh-faced King on a counterhistory cooked up by Rankin, who’s read between the lines of King’s diaries and come up with a Freudian deep dive into the future PM’s psyche.

Rankin’s aesthetic is as wild as his plot. The bankrupt morals of Canadian politics are reflected in his minimalist geometric sets that recall the nightmarish art design of The Cabinet of Dr Caligari. The Canadian Rockies become MDF cutouts that look set to tumble at any moment, while elevated walkways and silhouette animations give the merest impression of a tangible world.

The retro-satires of fellow Winnipegger Guy Maddin loom large, but Rankin’s comedy is more acidic, less whimsical – perfect for a tale of a craven politician with low moral fibre, which will surely resonate on both sides of the Atlantic.

Suk Suk is a loving, considerate tale of queer love in later life. Elaborating an affair between two elderly men in present-day Hong Kong, Ray Yeung proves himself as an astute observer of human affection and social obligation in his third feature film.

‘Suk’ is a Cantonese term for ‘uncle’ and Yeung regards his two leads – cab driver Pak (Tai Bo) and retiree Hoi (Ben Yuen) – with the reverence due to one’s familial elders. His camera follows at a distance as they walk around the city streets and watches unobtrusively in their brief moments of privacy. The societal homophobia that pervades Hong Kong is addressed, but Yeung never condemns the couple’s affair (behind the backs of wives and children) as illicit.

That syllable written twice consecutively indeed also carries carnal, onomatopoeic connotations, and Leung is unembarrassed by the physical reality of Pak and Hoi’s sexual activity. Its depiction onscreen is frank and explicit, but never less than romantic.

Shot with an appreciation of small details and a deep empathy for its characters, Suk Suk is a gentle drama shot through with commendable purpose. 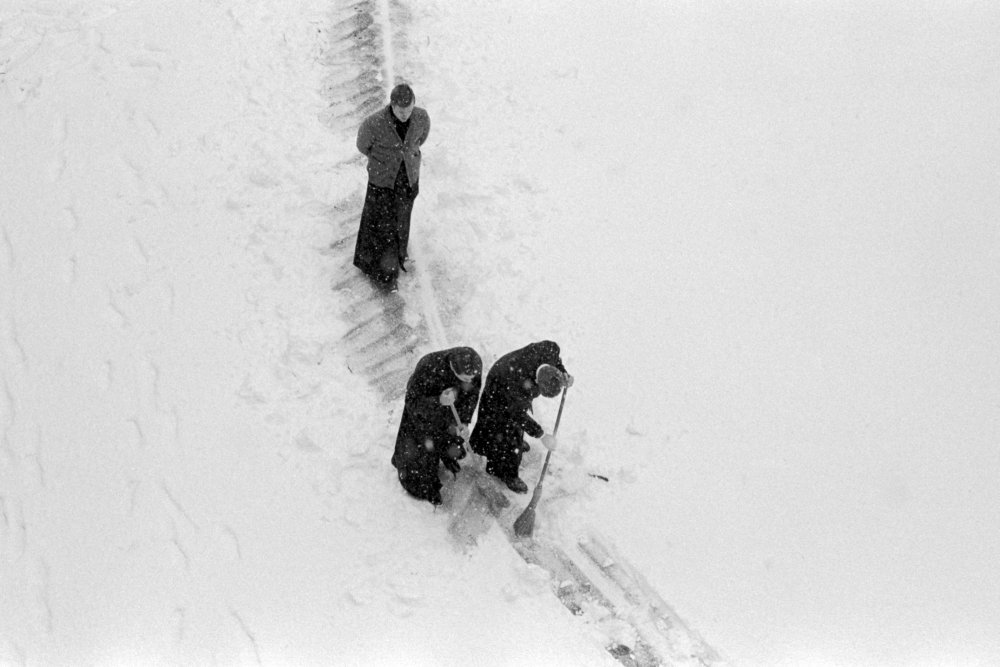 Servants best exemplified what the Berlinale’s new section Encounters was supposed to be about: uniqueness. Here a seminary for training Catholic priests in the Bratislava mountains during the Communist era becomes a model for the way politics worked for everyone then in Czechoslovakia.

Boyhood friends Juraj (Samuel Skyva) and Michal (Samuel Polakovich) join the seminary together, but their attitudes diverge when they encounter seditionary books and pamphlets distributed clandestinely. For the seminary is under the close control of Pacem in Terris, a clerical organisation in cahoots with state security, who will have to close it down if the rebels can’t be rooted out.

Intimate encounters between these forces in austere surroundings produce chilling moments of quiet menace. An early scene of a bloodied body being dumped in a river signals one possible cost for those caught stepping out of line, the other being conscription.

This second feature by Ivan Ostrochovsky (Koza) leans heavily on a mood of static tension and on gorgeous black and white tableaux photography. If it feels more like a collection of terrific scenes than a coherent narrative, that’s because the script is deliberately elliptical and there’s much distraction from the hypercharged sound design. Nonetheless it’s a fascinating ideological chiller.

From its urgent, tense opening scenes to its disturbing and vivid conclusion, Sleep is a vital slice of Lynchian dream-horror from feature debut director Michael Venus, who co-writes with Thomas Friedrich.  When recurring nightmares send Marlene (Sandra Hüller) into a stupor at a hotel in rural Germany, her daughter Mona (Gro Swantje Kohlhof) investigates the building, its personable owner Otto (August Schmölzer) and the local town of Steinbach. Mona uncovers a wealth of sinister secrets and is plagued by unsettling visions in both her waking and slumbering states.

Venus’s film plays with these liminal states of consciousness and is often visually arresting, with repeated, terrifying images of flaming destruction and people in pig masks. Clear antecedants for the film’s key hotel location and oneiric themes are The Shining and its follow-up Doctor Sleep, but Sleep bears comparison with other recent exceptional genre works, from the warped family dynamics and startling shocks of Ari Aster’s Hereditary to the unsettling supernatural elements of Joachim Trier’s Thelma (). As the assured and eager Mona, Kohlhof is surely set to break out from German TV stardom, while Schmölzer steals it as the hilarious hotelier with something to hide.

Most cinema-goers have some association with the fall of the Berlin Wall, either as a direct memory, a Cold War phenomenon that captivated global media or a distant historic event. But few may know that over 60 concrete slabs of that history ended up in the United States. That reality is explored by filmmakers Courtney Stephens and Pacho Velez in their engaging documentary The American Sector, which premiered in Berlinale’s Special programme.

Stephens and Velez trace the pieces, be they brightly graffitied or re-appropriated as austere abstract art, to their new locales: military compounds and museums, but also restaurants, parks, universities, private homes and even horror arcades. Each slab’s provenance is briefly narrated by its new owners, and contextualised by additional archival footage.

In brisk conversational style, The American Sector shows how quickly the fall of the Wall became a shorthand for Cold War triumphalism, again tested in today’s tense political climate. And yet the directors also engage immigrants, refugees, indigenous persons and African Americans, whose own interpretation of freedom, and of the price paid for it, transcend facile nationalist pathos. In the end the Wall emerges as a site of encoded memory and hope for a united world, as well as a willful, fraught projection.