Wild wonder inside and out at Alchemy 2019

New creative director Michael Pattison encouraged audiences to “embrace the strange” at this invigorating festival where the experiences counted for as much as the work. 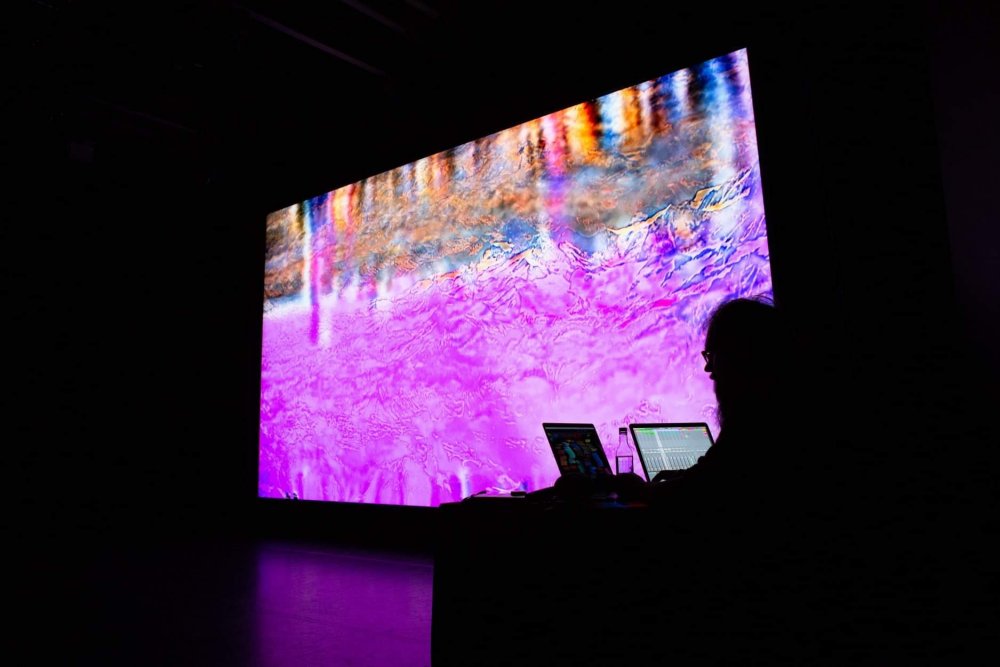 In his 1936 essay From Pigment to Light, László Moholy-Nagy asserted that the “film of the future” would contain “a wealth of undreamt-of optical experiences that will be profoundly stirring to our emotions”.

For its ninth edition, taking place in the Scottish border town of Hawick (pronounced ‘hoick’) last month, the Alchemy Film & Moving Image Festival clearly got the memo. Over four days of symposia, screenings, installations and performances the festival delivered a wealth of intellectual and artistic stimulation, but it was the experiential encounters that particularly stood out. The 2019 festival also marked the arrival of a new creative director at the helm in the shape of Michael Pattison (formerly of this parish), who brought with him some eye-catching new branding and an enticing festival tagline: “Embrace the strange”.

The strange was evident from the off – performers in animal masks from dance troupe Dudendance were be spotted around the town enacting slow-motion melodramas that seemed to be spilling out of their installation Out of the Wild (2019) – but it was Tondal’s Vision (2018) from Canadian filmmaker Stephen Broomer that set the tone of the first morning. A weird and terrifying fantasia, the film is a transformation of Francesco Bertolini, Adolfo Padovan and Giuseppe De Liguoro’s 1911 take on Dante, L’Inferno, into a labyrinthine retelling of the 12th-century tale of Irish knight Tondal//Tnugdalus, whose visions of hell led to a renewed piety.

Broomer rephotographed L’Inferno and then experimented with chemical techniques – such as Mordançage processing – and digital manipulation. The result is a spectacular descent into hell as the images morph and abstract, in a constant state of flux, drenched in colours taken from Simon Marmion’s illuminations for the 15th-century manuscript Les Visions du chevalier Tondal. The action of the original film is disconnected and reconfigured – one scene appears out of context to be referencing The Vision of Tondal, a famous work attributed to the followers of Hieronymus Bosch – and in Broomer’s looping motifs, his apparition of hell sees a bumbling angel lead the eponymous knight in eternal circles.

While they share a hallucinatory quality and trade in equal amounts of temporal displacement, Tondal’s Vision couldn’t be more different to Madison Brookshire’s Fountain, one of the expanded cinema performances that rounded off each day at the festival. In his presentation at the symposium that preceded the festival proper, Brookshire spoke of his desire not to obsess over being relevant but instead to seek to be “untimely”. He went on to say that we “live in a time where people may well consume more moving images – and think about them less – than at any other point in human history. To be untimely, I think we have to resist that culture. We have to make images that cannot be consumed.”

In Fountain, which would probably be categorised as a structural film, both his subject and form are time. Brookshire has described Fountain as a “frequency”, but in physical terms it is a 16mm Pageant projector running without any film and set to a speed just below that needed to maintain the illusion of continuous light. It is a rectangle of light projected on to the screen, an empty white box accompanied by a single repeated note played by Brookshire on a harmonium. 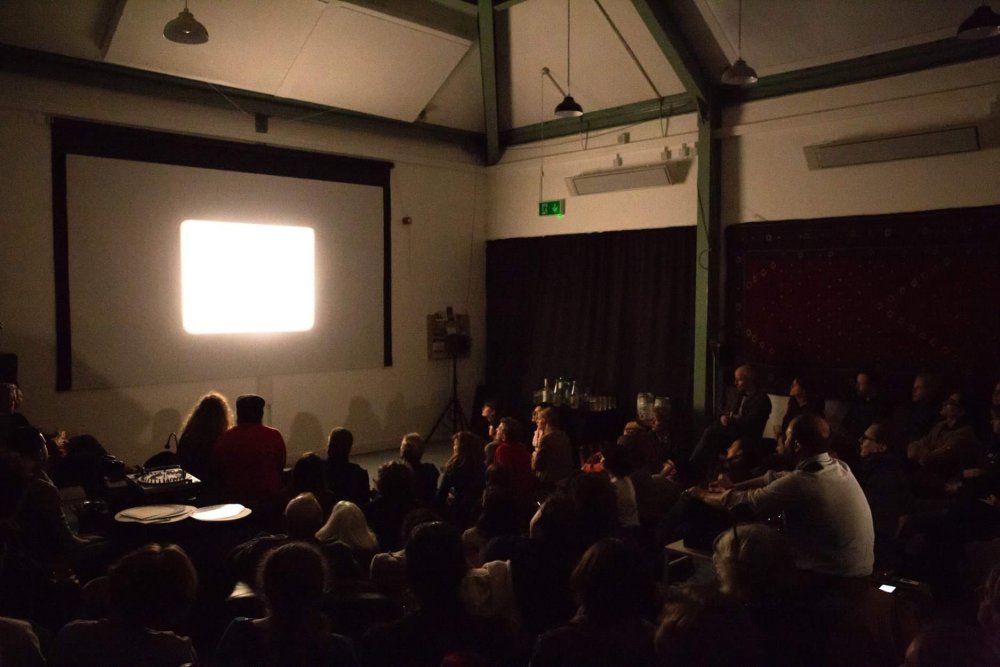 By stripping away anything that might indicate the passage of time – such as a sequential musical score – Brookshire’s work untethers the audience, and although the speed of the film is too fast to elicit the kind of hallucinations associated with films such as Tony Conrad’s Flicker (1966), Fountain is both transportive and transfixing. You are very much in the room watching the blank screen and lost in invisible patterns and colours. You are both aware of the room around you and as lost in eternity as Tondal. It’s a fascinating work that was advertised as being 30 minutes long, but the duration was hard to truly quantify while watching.

The opening shot of Toby Tatum’s short film The Loom (2018) conjured a similarly time-bending effect but through more recognisably pictorial means. The image was a heron stood in a sun-dappled pond hunting by waiting. The quality of the light and the composition, with the heron reflected in the water, was beautiful, and by slowing down and looping the footage, the bird seems almost to be frozen in the bewitching crepuscular sunlight, even though ripples in the water and the drift of dust betray the ebb of time.

Matthew Lancit’s one-minute short Flying to Nowhere (2017) made for a comedic companion piece, watching gulls apparently caught in a headwind over the ocean and unable to move before the camera zooms out to reveal that they’re actually poised, surrounding a couple with food on the beach. In the second half of Tatum’s film a spider is observed on a web, once again portrayed via looping video and so trapped in its own hunting ground. Karel Doing’s 16mm film The Mulch Spider’s Dream offered an attempt to convey the creature’s own experience. Working with expired celluloid stock, Doing crafted organic shapes and colours directly on to it using weeds and other phytochemical processes in an attempt to approximate an alien perception.

Dutch filmmaker Esther Urlus shares a similarly DIY sensibility to her analogue practice, noting during an ‘In Focus’ screening dedicated to her work that she had once processed celluloid using horse urine, and quickly advised the audience against trying it. Urlus is a fascinating filmmaker to consider as her methods are integral to the very essence of her work on screen – films are not just subject to, but more accurately defined by the results of various unusual printing techniques. Red Mill (Rode Molen, 2013) can be considered intellectually as a study inspired by Piet Mondriaan’s 1911 painting The Red Mill, but it is the visceral effect of the colours, the product of multiple exposures through different masks during printing, that makes the work so memorable.

Colour also played a significant role in one of the other ‘In Focus’ events – that of the work of Deborah S. Phillips. In a less conventional screening, Phillips presented her own work including her red-hued blend of collage, animation and text Capsicum (2008), and her overlaid, superimposed examination of green Im Grünen Bereich (2017). Phillips has spent a decade utilising found objects, natural materials and text to create colour studies. In the screening she revealed that she still hasn’t quite worked out how she feels about blue, and so the session opened up into a freeform discussion about the associations of the colour and how different languages approach it – all while two slide projectors clacked through cerulean compositions that slowly seemed to conform to the emotive qualities being described and discussed by the audience.

Where Urlus’s and Phillips’s intentions might have been more enigmatic, a number of other works at the festival sought to offer an unusual experience of places and spaces. On the big screen, Chris Paul Daniels’ playful and linguistically dexterous Northern Lights (2018) framed 16mm and Super 8 footage of Blackpool Illuminations as elusive relics of a prelapsarian age being interrogated by an extra-terrestrial anthropologist keen to understand the origins of a “grand nationalism yet to come”. 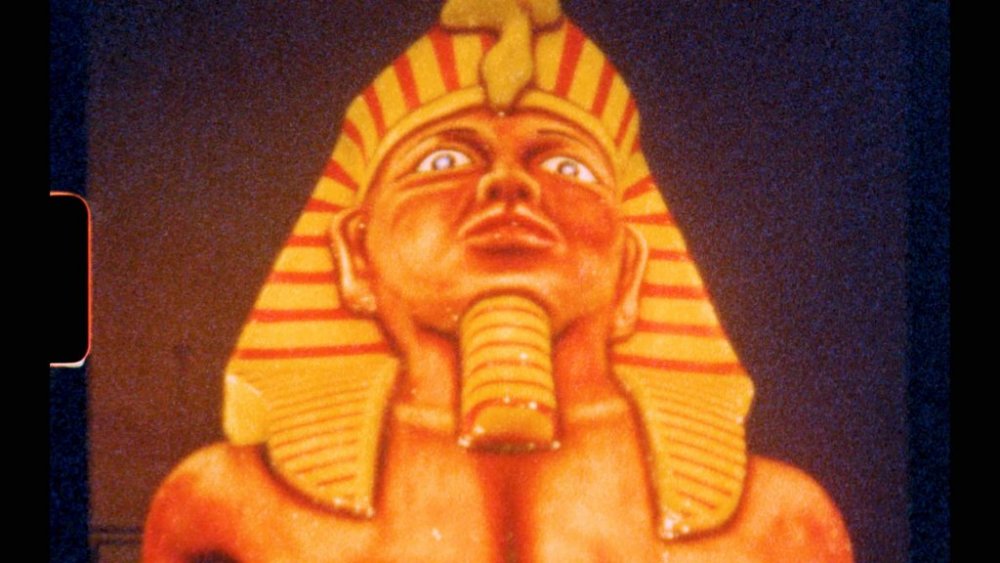 Richard Forbes-Hamilton’s A Ghost Eats Mud on the Mountain (2019), Greg Marshall’s Bearing (2018) and Ece Ezer’s GGH (2018) offer similarly askance views of, respectively, Hong Kong, Yemen and Turkey. Marshall constructs a silver orb that explores, reflects, and maps the sites of US imperialist action via found images; Ezer creates a dystopian science-fiction landscape from the back seat of a hugely popular bus route; Forbes-Hamilton offers a ghostly figure on a buffalo as a guide to an off-kilter and ethereal vision of Hong Kong that is at times as evocative of a crossed threshold as Stephen Broomer’s vision.

Thresholds were a key component in several of the installations in which spatial concerns were foregrounded. James Davoll’s Bound (2019) explored the Irish border through two screens algorithmically displaying an assortment of photos taken on roads crossing the border. Reflecting the tensions inherent in the subject the screens they also contradicted one another – one highlighting individual landscapes and the static nature of the border, the other super-imposing them to illustrate their homogeny and creating a blurred motion effect in response to the roads’ traversing of the boundary.

Miriam Sampaio literally traversed a boundary to make her piece, breaking into the Lisbon building that used to house PIDE (Salazar’s Portuguese SS). I Am the Daughter of Dead-Fathers (2018) consisted of three screens in a dark basement that featured footage Sampaio captured in the building, charting the haunted geography of this place echoing through time into Hawick via an ominous droning soundtrack. 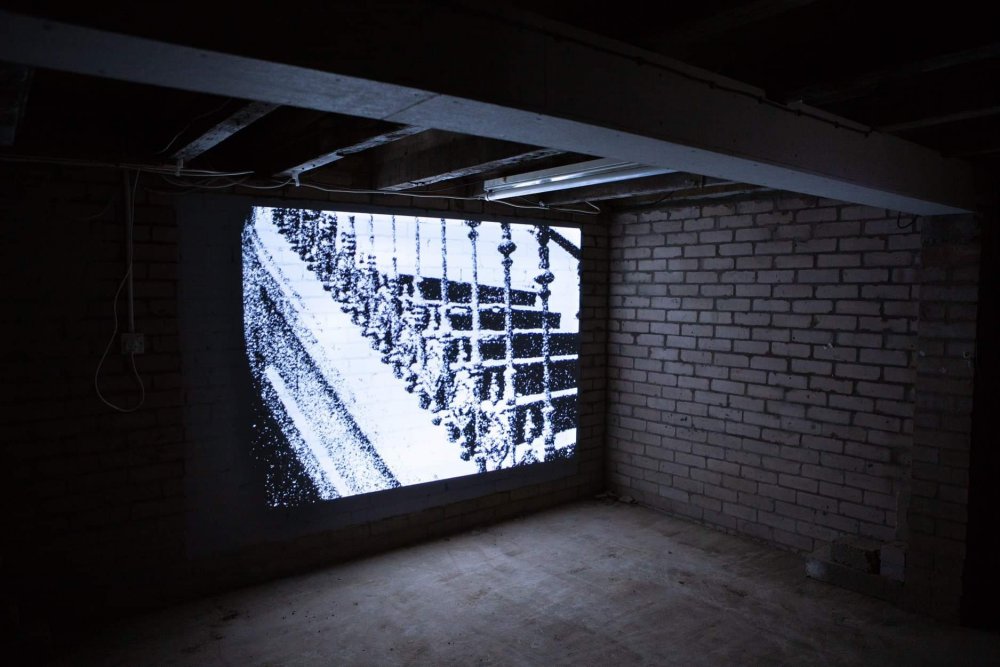 I Am the Daughter of Dead-Fathers

In another subterranean room, Dana Berman Duff presented What Does She See When She Shuts Her Eyes (2019), a film made with her close friend Sabina Ott, who sadly passed away during production. Two screens at either end of the room projected the underground channel of an Icelandic lava flow, transforming the space itself into a cavern through which the audience subtly felt like they were drifting – via one image slowly zooming in and the other out. Through the space haiku text spiralled, invisible only as it seemed to pass overhead between screens, and moments of vivid colour – in honour of Ott’s original polychrome vision – punctuated the slate-grey tranquility.

Perhaps the most brazen use of colour to disrupt tranquility – and one of the most singular works at the festival – was Jacques Perconte’s The Eighth Alps (2019), the live expanded cinema performance that acted as the closing night event. Perconte’s style is perhaps difficult to imagine unless you see it, but it essentially takes studies of landscapes, bodies and materials and distorts them digitally. In this film, images of the Alps degraded and distorted as Perconte improvised with his laptops at the front of the auditorium; the picture pixelated, streams of colour engulfed the screen like a crashed desktop, and as hawks hovered over the mountains they left staggered trails of glitches across the screen like computerised vapour trails.

With atonal digital audio turned up to 11, the effect was overwhelming. Perconte’s desire to highlight the push and pull between images of nature and the nature of images sounds like an academic endeavour but his work leaves you bodily reeling. Writing about Perconte’s work in 2018 for desistfilm, José Sarmiento Hinojosa referred to his style as digital alchemy, so it seems fitting that this electrifying, abstracted journey into the mountains raised the roof and brought down the curtains on this experiential edition of Alchemy.