The Other Side of the Wind: understanding Orson Welles’s ‘impossible’ film

After languishing unfinished for decades, does the now-completed movie carry a message from the auteur who first imagined it, or does it instead remain a tantalising cinephile puzzle? 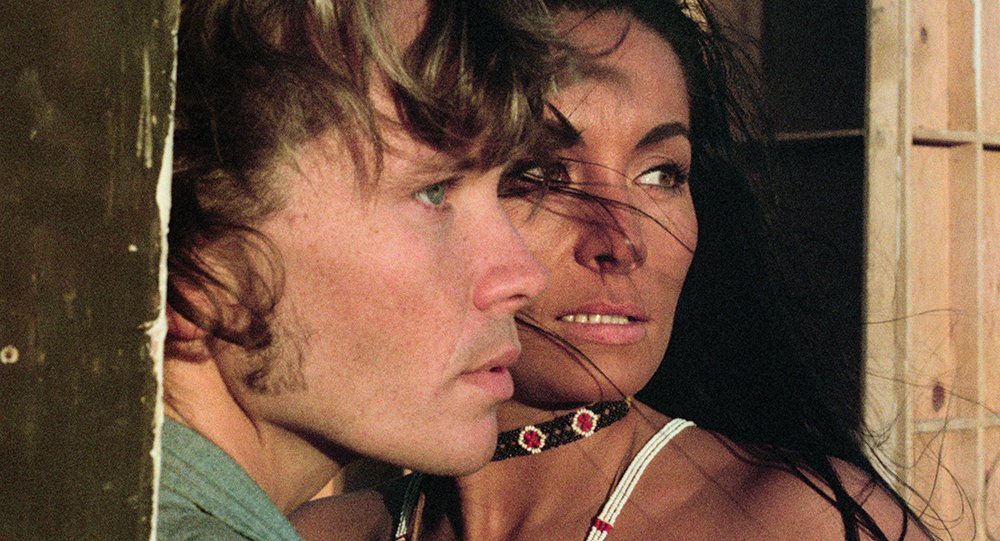 “All I can do is to place some fragments before you, myself among them, and as you are accustomed to digging things up and piecing them together, I trust you to do the rest.”

The Other Side of the Wind is now streaming on Netflix.

Welles was, of course, still alive at this point, and theoretically still striving to complete Wind, which he had shot between 1970 and 1976. I can no longer recall where I initially heard The Other Side of the Wind mentioned – the precise source has, appropriately enough, been lost in the mists of memory – but I do remember thinking the description of it as unfinished must be erroneous or outdated, since it had, I believed, played at a local cinema some years previously. Turns out I was confusing it with Charles Jarrott’s The Other Side of Midnight (1977), the poster for which I’d undoubtedly noticed while on a youthful excursion to see Star Wars (1977), the blockbuster that inadvertently made both studio productions aimed at adult audiences, such as The Other Side of Midnight, and anti-Hollywood films such as The Other Side of the Wind equally impossible.

Not that Welles needed George Lucas’s assistance to achieve this. Wind was always positioned as an ‘impossible’ work, one whose impossibility formed the warp and woof of its fabric. Trying to discuss it without acknowledging its mythic status, as if this were just ‘un film comme des autres’ (to use Godard’s term), would be foolish. But then Wind sets out to make everything said about it seem, if not actually foolish, at least somewhat redundant, any position one chooses to take, whether positive or negative, having already been articulated by the film itself. 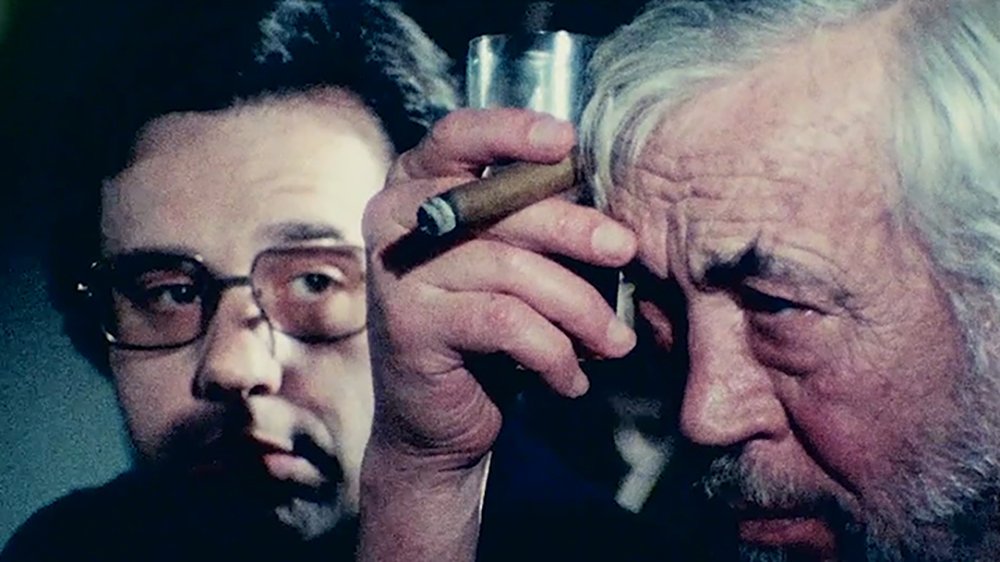 The Other Side of the Wind focuses on Jake Hannaford (John Huston), an ageing director making a movie (also entitled The Other Side of the Wind) aimed at the youth market. Perhaps a third of Wind’s running time is dedicated to this film-within-a-film, whose experimental style testifies to the contradictory nature of Welles’s ambitions. For if Wind has proved to be a text sprung free from any precise time or place – principal photography being carried out in several countries over a span of years, post-production sprawling across four decades – it is also highly concentrated, occurring within a strictly circumscribed period (a few hours during Hannaford’s 70th birthday party), set primarily in one location (Hannaford’s ranch), and dealing with a specific phase of American cinema. The excerpts we see from Hannaford’s Wind were mostly shot in 1970 and 1971, and suggest Welles was parodying a then-fashionable style of filmmaking. Michelangelo Antonioni’s Zabriskie Point (1970) is an obvious model, but there are also echoes of Monte Hellman’s Two-Lane Blacktop (1971), which went into production the same month as Wind (August 1970). By the time Welles got around to shooting John Huston’s scenes in 1974, Hannaford’s cutting-edge movie was already an anachronism.

Since Hannaford’s Wind is itself unfinished, one wonders to what extent the vicissitudes preventing Welles from finishing his Wind were the result of ‘fate’ or something more difficult to pin down: not quite a conscious intention, yet not precisely bad luck (for Welles was always both the frog and the scorpion). Part of the film’s fascination resides in a suspicion that Welles, like the tycoon he played in Mr Arkadin (1955), intended this as a project which would set people chasing their own tails (or tales), attempting, long after the artist-manipulator’s death, to complete the task they had been assigned, finish they game they had started, solve the enigma they were investigating, much as Thompson attempts to solve the enigma of Charles Foster Kane.

This is, to a certain extent, an aesthetic conjuring trick, similar to the more traditional conjuring tricks Welles was so fond of. But it also relates to Wind’s function as a cinephilic object which, by its very nature, could not be given a final shape by its godlike director, and had to be reconstructed from the surviving fragments by a group of collaborators (who, ironically, were primarily motivated by the desire to be as faithful as possible to the absent auteur’s intentions). Charles Higham accused Welles of having a “fear of completion”. But mightn’t this fear have been a coherent artistic strategy, a principled refusal rather than a neurotic limitation? Wind’s unfinished/chaotic quality is clearly not (or not simply) a regrettable result of the circumstances of production, but rather something existing at the heart of a work where nothing connects to anything else, one depicting an America in which our perceptions are no longer reliable and all certainties (even Hannaford’s certainties about his heterosexuality) have been called into question. The America, perhaps, of President Trump (whose insistence on dismissively referring to a woman who claims Native American ancestry as “Pocahontas” is echoed here). 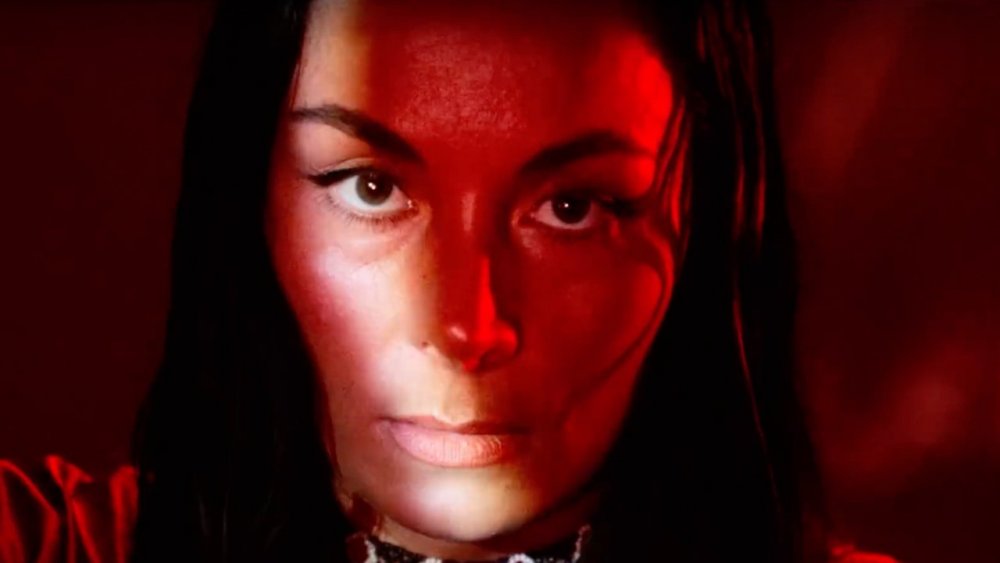 Which may explain why a film so rooted in its time feels strikingly modern, erasing the line between 70s cinema and recent pastiches of 70s cinema such as Paul Thomas Anderson’s Inherent Vice (2014). Like the pianola described by Tanya (Marlene Dietrich) in Touch of Evil (1958), “It’s so old, it’s new”.

Hardly surprising, then, that Wind casts a long shadow; during the weeks following my first viewing, I found traces of it in many of the films I watched, and even the books I read – hence my introductory quote from The Roots of Heaven, which I just happened to be reading while preparing this column (and which was made into a film by John Huston, with a Welles cameo). The more accustomed one becomes to Wind’s jagged editing, designed to throw us out of rather than ease us into the diegetic world, the more obvious it is that there are multiple potential narratives here, that we might adopt the viewpoints of John Dale (Bob Random), Dr Burroughs (Dan Tobin), Juliette Rich (Susan Strasberg), Billy Boyle (Norman Foster), the Baron (Tonio Selwart), Pister (Joseph McBride), the nameless actress played by Oja Kodar, or any number of other characters, and perceive an entirely different reality (or an additional piece of the puzzle).

Whatever side of the wind we happen to be regarding onscreen events from, there is always another perspective, equally valid, waiting in the wings. If Wind’s eventual shape had to be determined after the fact, its ultimate meaning must be decided by each individual viewer. In contrast to Citizen Kane (1941), with its rigorously disciplined schedule and Rosebud solution, nothing about The Other Side of the Wind is predetermined. While this never ceases to be a ‘closed’ auteur work, it is also an inexhaustible ‘open’ text in which the conundrum of the protagonist (or rather what to make of the protagonist) is left genuinely unresolved. To quote a line from the film itself, “A mystery may reveal. It never explains.” 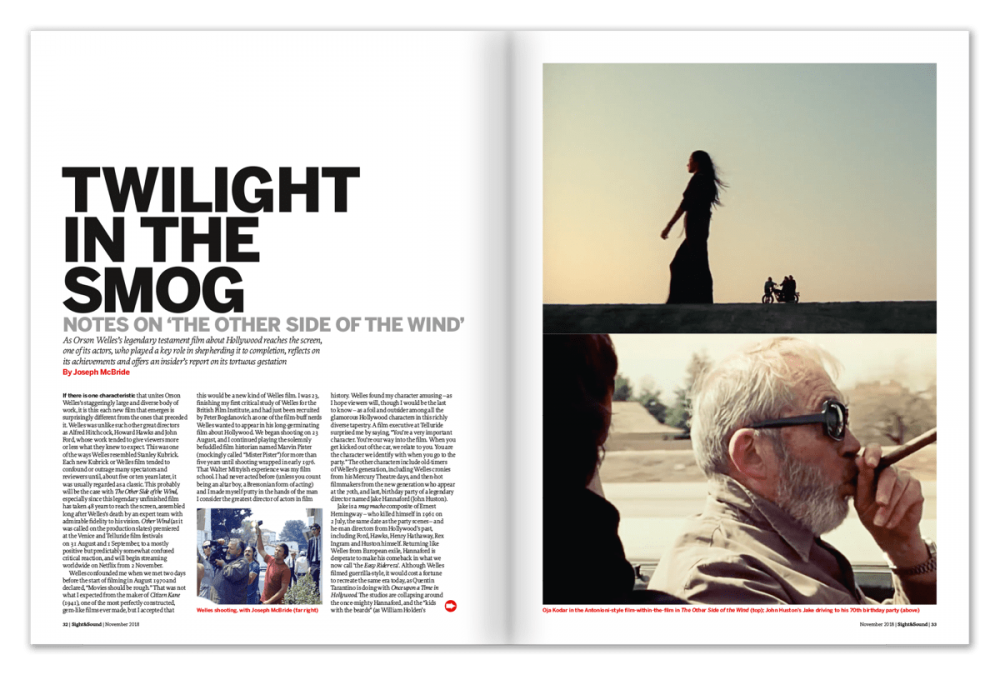 Twilight in the smog: notes on The Other Side of the Wind

As Orson Welles’s legendary testament film about Hollywood reaches the screen, one of its actors, who played a key role in shepherding it to completion, reflects on its achievements and offers an insider’s report on its tortuous gestation. By Joseph McBride.

Related to The Other Side of the Wind: understanding Orson Welles’s ‘impossible’ film