Your 10-film introduction to the Ozu Cinematic Universe… from Tokyo Story to An Autumn Afternoon. 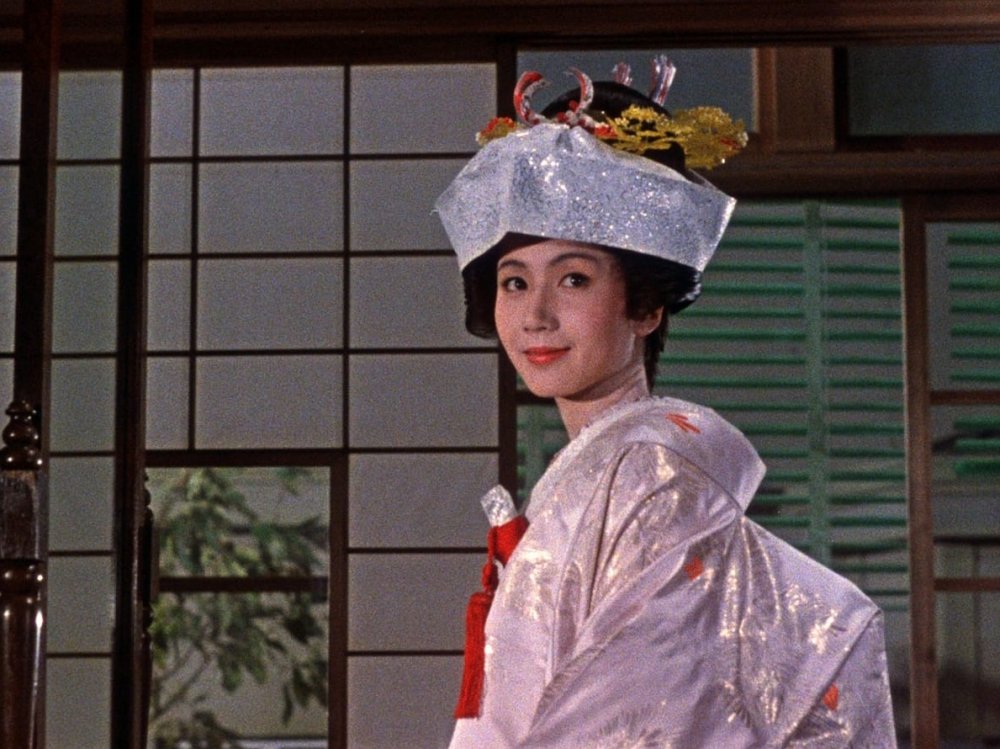 Yasujiro Ozu’s labelling as “the most Japanese of all the Japanese directors” has at best served as a distraction from the merits of his films, at worst a complete turnoff. Too often have English-language writers misleadingly emphasised the role of his country’s artistic and philosophical traditions in shaping his distinctive aesthetic.

If anything, Ozu was a modernist, his finger fixed firmly on the pulse of the here and now in which he created his works. Early films drew influence from Hollywood comedy and melodrama, while the later ‘home dramas’ for which he is most celebrated exude a warmth and pathos that can be universally enjoyed.

Ozu’s idiosyncratic approach is characterised by an unusually low static camera position that flattened the image, his films unfurling as a series of meticulously composed tableaux. Speaking characters are usually framed in medium close-up, positioned at unconventional angles to the camera, resulting in his much commented upon mismatched eyeline effect, while his transitional ‘pillow shots’ – cutaways to everyday items such as teapots, vases or laundry on the line – appear to serve no narrative purpose other than linking individual scenes.

Ozu pared down his aesthetic throughout his working life, to the point that towards the end he had eradicated all moving camera shots and devices such as wipes, dissolves and fade-ins and outs. There’s a dramatic minimalism too, with the stories relayed objectively through no single character perspective, and key plot points such as courtships and marriages often omitted entirely. This has led to another misapprehension, that Ozu’s gentle portraits of family life are slow and nothing much happens, which may be true if approached with conventional narrative expectations.

But watching Ozu without all the baggage, one discovers a world that is charming, poignant and often funny. Here are 10 of his best. 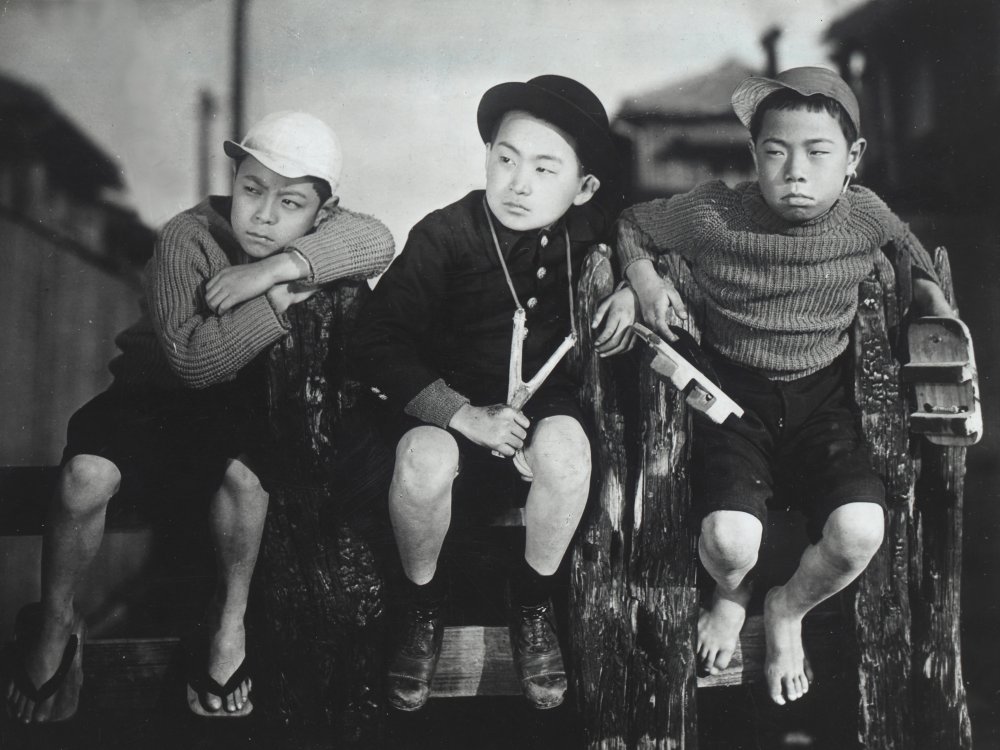 Only 36 of Ozu’s 54 films survive to this day. He made the bulk of the lost titles, including his debut and only period drama, The Sword of Penitence (1927), during the silent era. His early ‘nonsense films’ and college comedies in particular betray the strong influence of Hollywood pioneers like Ernst Lubitsch, Charlie Chaplin and Harold Lloyd, while reflecting the economic and social realities of a rapidly urbanising 1930s Japan through its landscapes and domestic spaces.

I Was Born, But… – a major survivor from this era – is a witty take on the class system and features two young brothers newly arrived in the suburbs, where their father has been transferred, who are forced to play hooky after being hounded by the local rough kids. After witnessing their dad making a prat of himself in his boss’s home movies, screened in front of his work colleagues and their families, the humiliated pair go on hunger strike. The event clearly undermines their father’s credo that hard work earns prestige.

This charming film demonstrates Ozu’s wonderful handling of child performers and was his first to be voted the best of its year by Japan’s leading film magazine, Kinema Junpo. 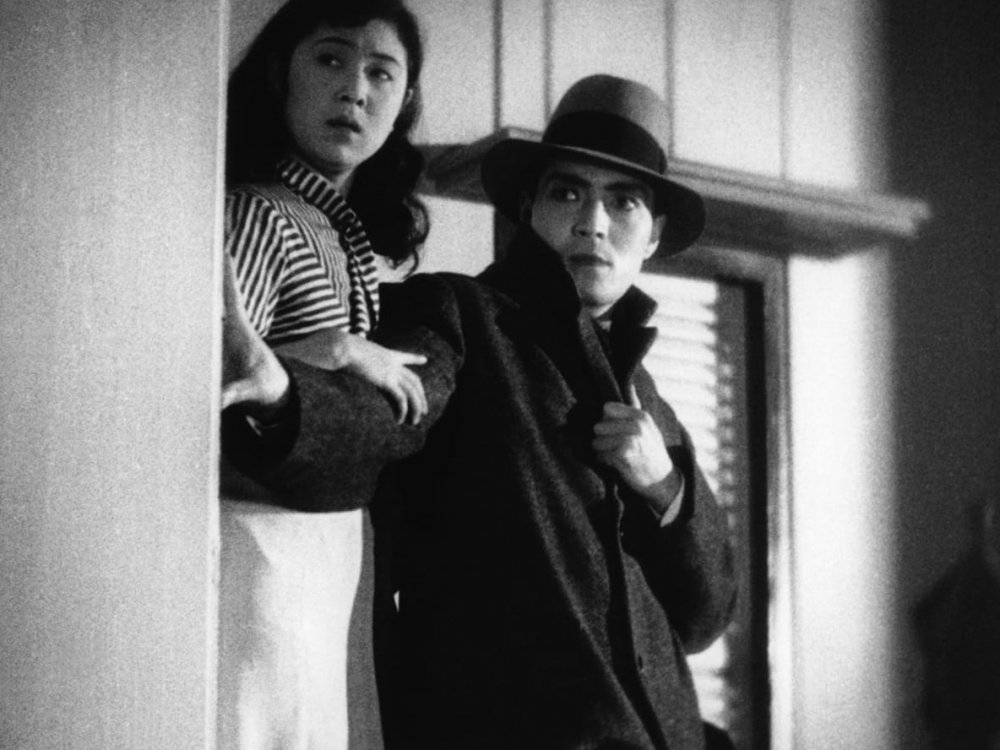 This Yokohama-set crime drama is barely recognisable as a Japanese film (save for its Japanese performers), let alone one from the future director of Tokyo Story (1953). Kinuyo Tanaka plays an office girl who keeps bad company but is soon to be sidelined due to her gang-boss boyfriend’s soft spot for the sister of a rookie boxer he is managing.

The style, costumes and settings are resolutely modern and western, with the gangsters clad in trilbies and trench-coats. The story unfolds in smoky billiards halls, boxing gyms and jazz clubs, each of the various locales adorned with candlestick telephones, gramophones, advertising posters, cocktail shakers and soda syphons, demonstrating Ozu’s fastidious approach to his arrangements within the frame. 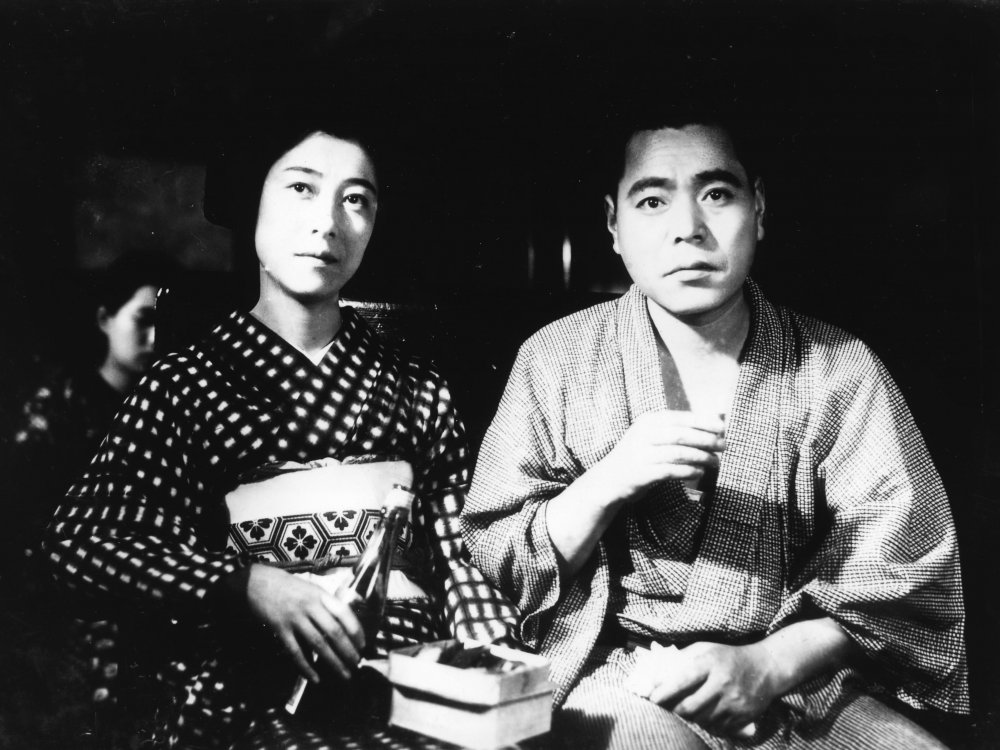 The hallmarks of the Ozu style are much more evident in this portrait of the dramas within an itinerant kabuki troupe in which not all of the family relationships are immediately apparent. There’s the immaculate composition and placement of objects within the frame, the insert ‘pillow shots’ of everyday articles such as laundry and teapots to mark passing time, and the camera’s rejection of any human perspective as it charts the characters’ comings and goings within a limited number of locales with an almost clinical objectivity.

Ozu, who came to the talkies at a relatively late stage with The Only Son (1936), remade this silent film in a sound and colour version, Floating Weeds, in 1959. Despite the very Japanese subject matter, the story was based on the 1928 American film The Barker. 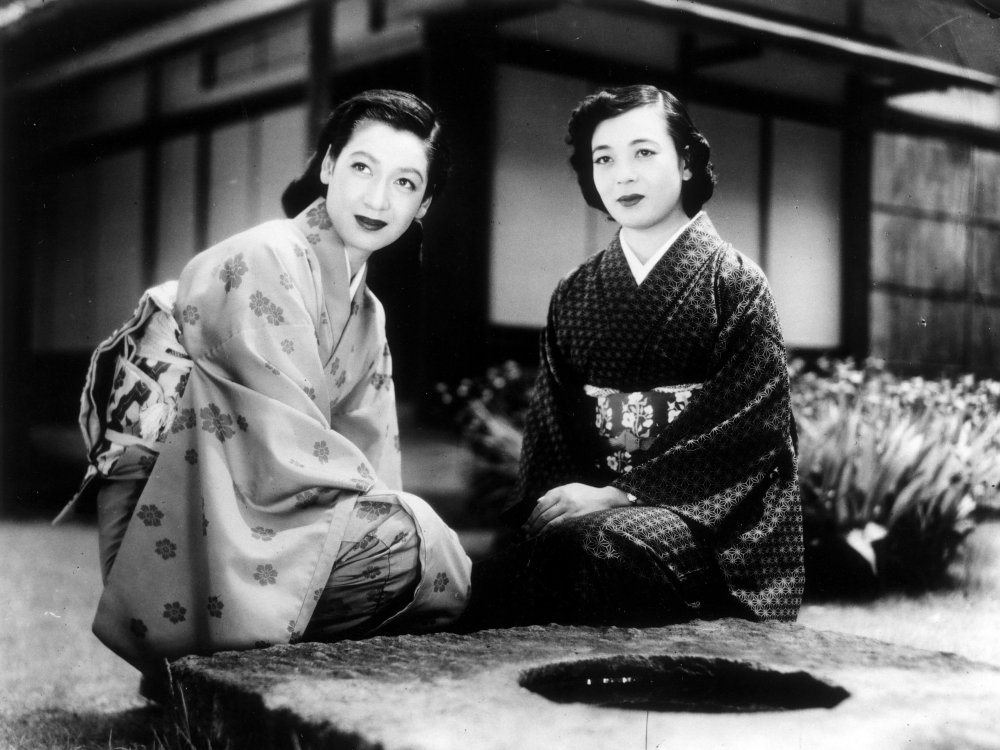 The postwar era saw Ozu and his screenwriter Kogo Noda narrowing their focus almost exclusively towards family life. Late Spring might be described as the archetypal Ozu set-up, and the first in the so-called ‘Noriko trilogy’, in which Setsuko Hara played effectively the same character in different household situations. Hara’s ability to appear both modern and independent while embodying traditional feminine virtues of demureness, politeness and emotional restraint is well served in her role as the dutiful daughter to a devoted widower father (played by another Ozu regular, Chishu Ryu), who is as concerned about her unwedded status as she is about abandoning him to live alone.

Immaculately realised and deceptively simple, Ozu’s bittersweet portrayal of the inevitable break-up of the family unit as the lifestyles of the two generations are, by necessity, pushed further apart, counts among his finest. 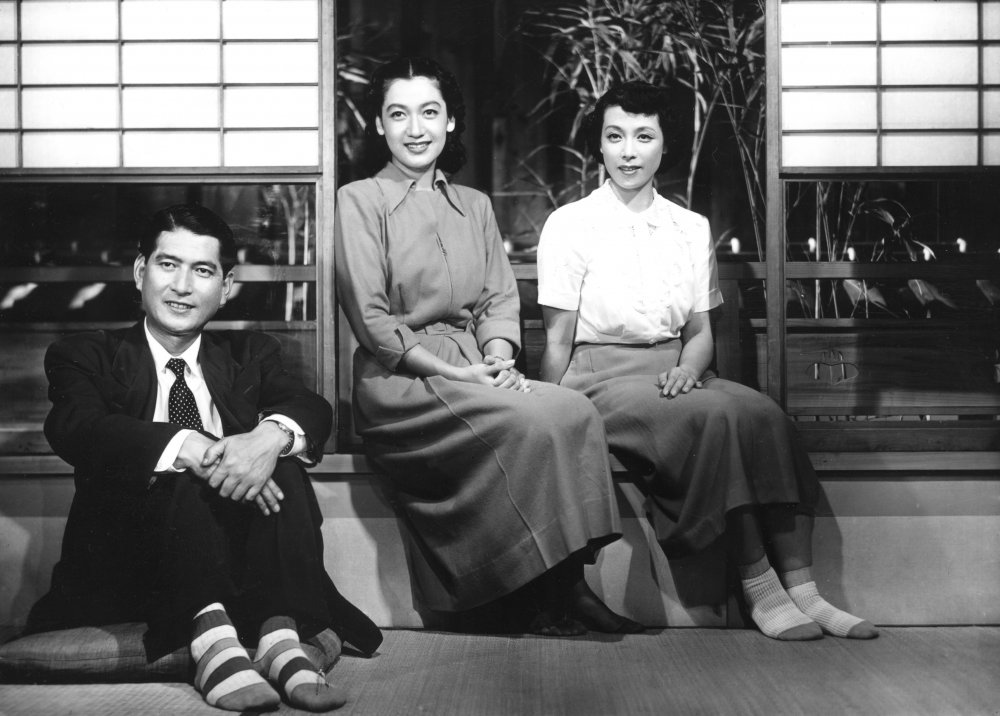 More than just cosy nostalgia, Ozu’s later works present unique snapshots of the minutiae of family life at precise points in time, as if preserving in amber the patterns of behaviour of the various members of the extended households they follow as they negotiate their work, family and social obligations. While as similar in theme and style as they are by title, they do, however, vary in tone, with this Jane Austen-like tale, the second in the ‘Noriko trilogy’, lighter in approach than its seasonal predecessor.

This time Ryu plays Hara’s older brother (in Tokyo Story he would play her father-in-law), whom she lives with together with their parents, her sister-in-law and her two young nephews. Noriko and her remaining singleton friends, carefree and happy-go-lucky women in their late 20s, don’t seem particularly eager to marry, even as the other members of the household make it their duty to find her a suitable match.

Beneath the serene veneer presented by its characters’ quotidian interactions, there’s an underlying air of stifled melancholy to Noriko’s situation, alluded to by the repeated transitional cutaways to caged canaries and the rigid grid-like patterns of the domestic interiors, exaggerated by Ozu’s characteristic low-angle shooting. 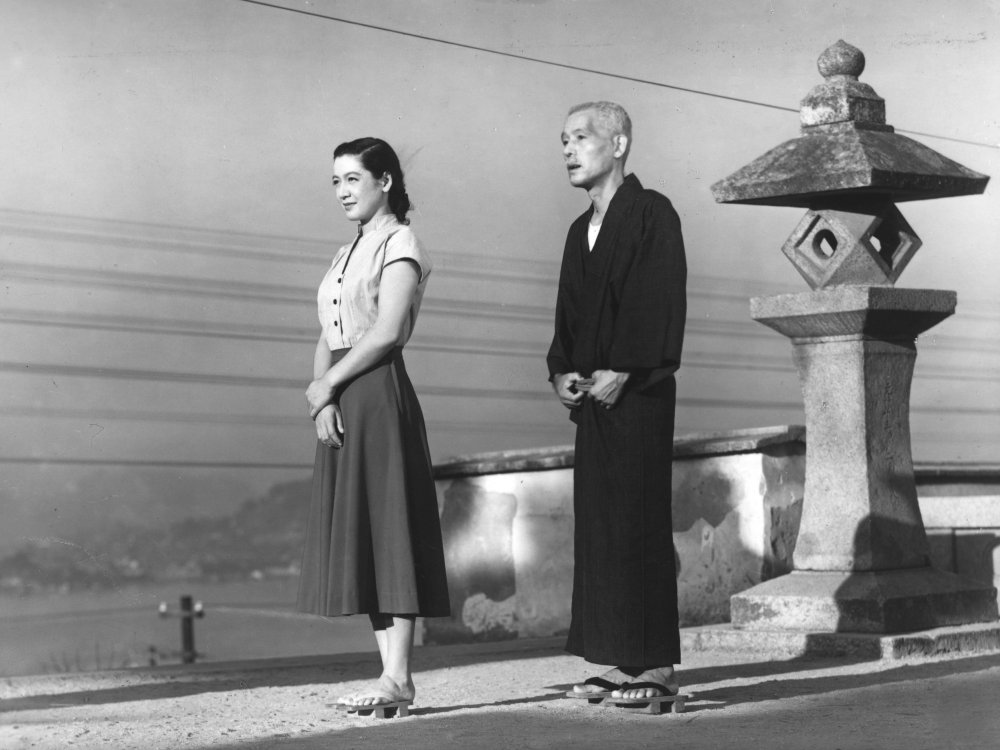 Ozu’s best known title and his first to be shown overseas, playing in London in 1957 and awarded the Sutherland Trophy the following year, Tokyo Story has regularly and justifiably appeared at the top end of international polls for the greatest film of all time.

It follows an elderly couple’s trip up from the sticks to visit their offspring in the capital, who, preoccupied with their own daily lives, treat them with a casual indifference bordering on the heartless. Only their daughter-in-law, Noriko (Hara’s third appearance as a character with this name), widowed after their son was killed during the war, has any time for them.

Tokyo Story is painful in its honest depiction of a family fragmented by the strictures of modern living, while the old couple’s sightseeing excursions take on a more melancholic aura with the awareness that the reconstructed skylines they look out across had been, barely a decade before, little more than rubble. 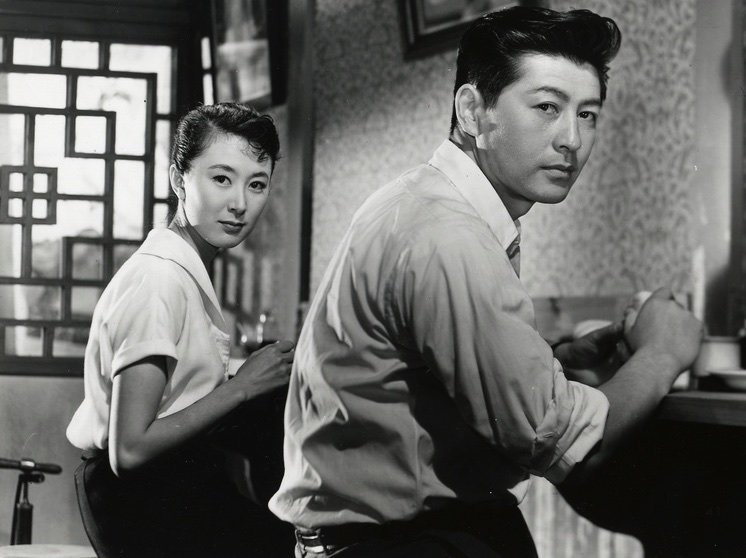 One of Ozu’s lesser-known titles, and certainly among his more pessimistic, Early Spring evokes the plight of two intelligent young people at odds with the demands of modern life, trapped in a loveless marriage in which the dreams of their youth have failed to materialise. The husband, a disillusioned white-collar worker bound to the surrogate family of his office environment, falls for the charms of a vampish colleague, leaving his wife alone within a domestic space that’s conspicuously empty of life compared with the director’s other films of the period. 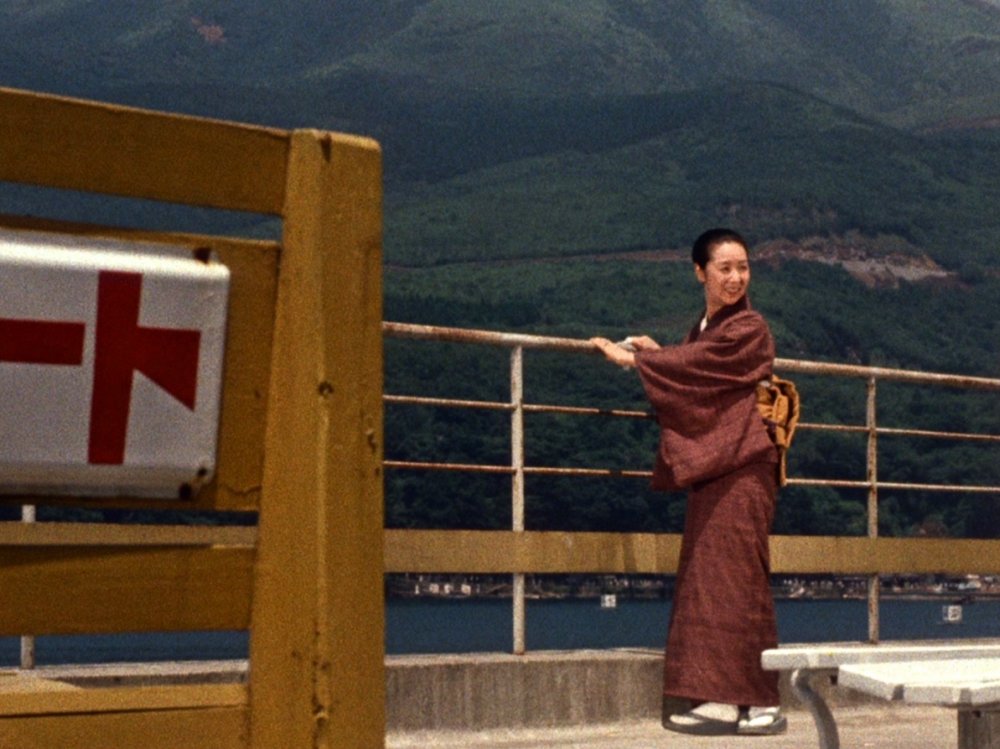 For his first colour film, Ozu chose the deeper, more saturated tones of Agfacolor over the Eastmancolor industry standard, and there’s a notably playful emphasis on the vivid scarlet teapot in the family living room, which occupies a pivotal position among all the comings and goings of the members of the Hirayama household.

The story, about a middle-class, middle-aged couple’s attempts to find a suitable husband for their headstrong eldest daughter, only to find she has romantic ideas of her own, is quintessential Ozu. So too is the style, with the low camera angle serving to flatten the image into a series of frontal planes, the characters negotiating themselves within the geometry of their quotidian environment and routines. 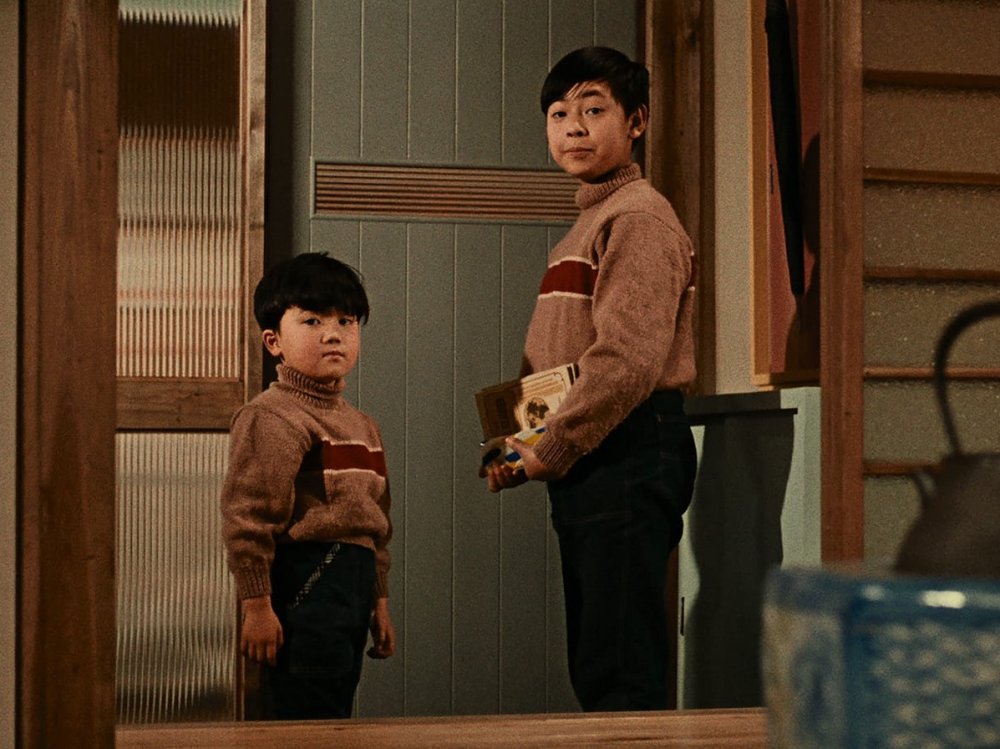 The impact of new social developments on the family unit is relayed in playful fashion here, in a tale of two brothers who decide to stop talking in protest against their father’s refusal to buy them a TV set and as a reaction against the vacuous banter of the adults in their community. As per usual there are several sub-stories involving other characters, namely some missing funds suspected of being embezzled from a neighbourhood community club and an ongoing farting competition among the local boys, which should put paid to Ozu’s rather highbrow and rarefied reputation. This is certainly a film anyone can enjoy.

Good Morning is often described as a modern reworking of I Was Born, But…, although it’s worth mentioning that the siblings Minoru and Isamu share the same names, and Chishu Ryu as their father, with the boys of Early Summer. 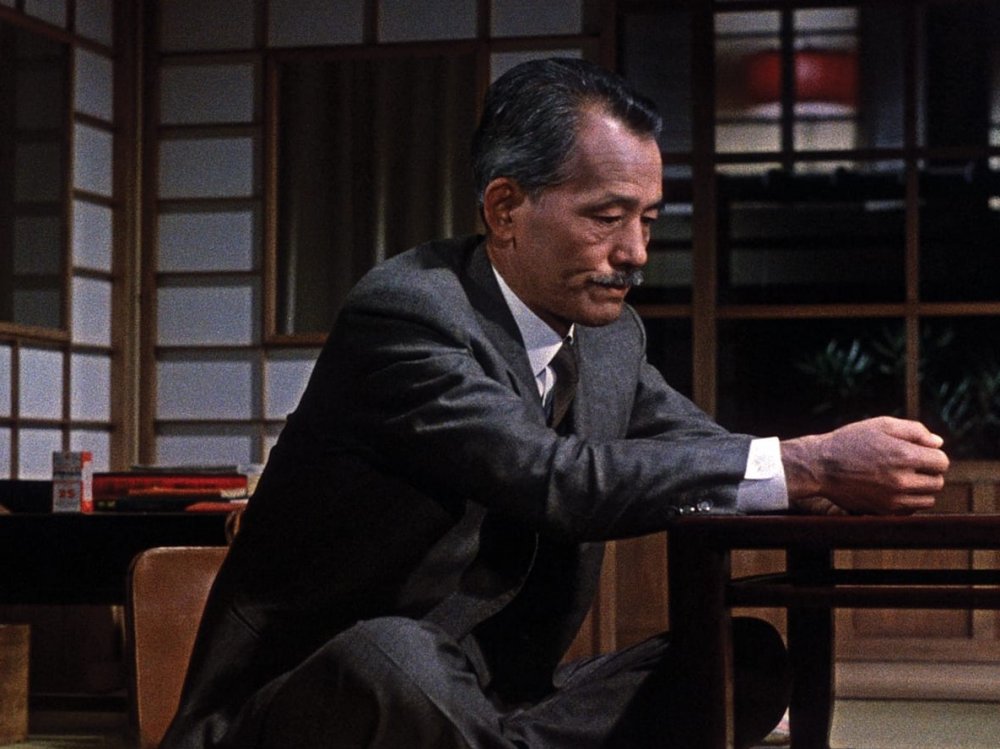 Despite his focus on the family, Ozu never married, living his adult life with his mother who died but a few years before he himself succumbed to cancer on his 60th birthday on 12 December 1963. Unsurprising, perhaps, that his final film is a meditation on the loneliness of ageing. For all that, it’s a remarkably upbeat one, with Chishu Ryu returning as the widower who, treated like a child by his own stony-faced offspring, spends most of his out-of-office hours drinking with his former schoolfriends and moping around an attractive bar hostess. Lonely, but never alone, he seems passively resigned to the same fate as his former teacher, now an old soak living and running a ramen shop with his surly, unmarried daughter.

Ozu’s striking abstractions of the image and reinvention of cinematic grammar had reached its apogee by this point. Despite the film’s overriding cheery tone, the cutaway ‘pillow shots’ of smoking factory chimneys, television aerials on high-rise roofs and piles of stacked up oil drums in rundown neglected backstreets suggest a director fully aware that his own era was coming to an end.