The mere mention of the screen waltz conjures up scenes of elegant ballrooms, filled with exquisitely costumed revellers swirling around polished floors under sparkling chandeliers. Think of Sophie Marceau and Sean Bean in Bernard Rose’s Anna Karenina (1997) or Keira Knightley and Aaron Taylor-Johnson in Joe Wright’s 2012 remake. But, while some may hear the strains of Henry Mancini’s enchanting waltz for the Pottsdorf coronation ball in Blake Edwards’s The Great Race (1965), most traditionalists will pine for the Viennese classics accompanying Austrian royals Romy Schneider and Karlheinz Böhm in Ernst Marischka’s Sissi (1955) and Omar Sharif and Catherine Deneuve in Terence Young’s Mayerling (1968).

There are several biopics of the Strauss waltz kings, including Ludwig Berger’s Walzerkrieg (1933) and Julien Duvivier’s The Great Waltz (1938). But nobody used ‘The Blue Danube’ more innovatively than Stanley Kubrick in 2001: A Space Odyssey (1968), while animator Ari Folman choreographed Shmuel Frenkel firing a MAG machine gun on a Beirut street to Chopin’s ‘Waltz in C sharp minor’ in Waltz with Bashir (2008). 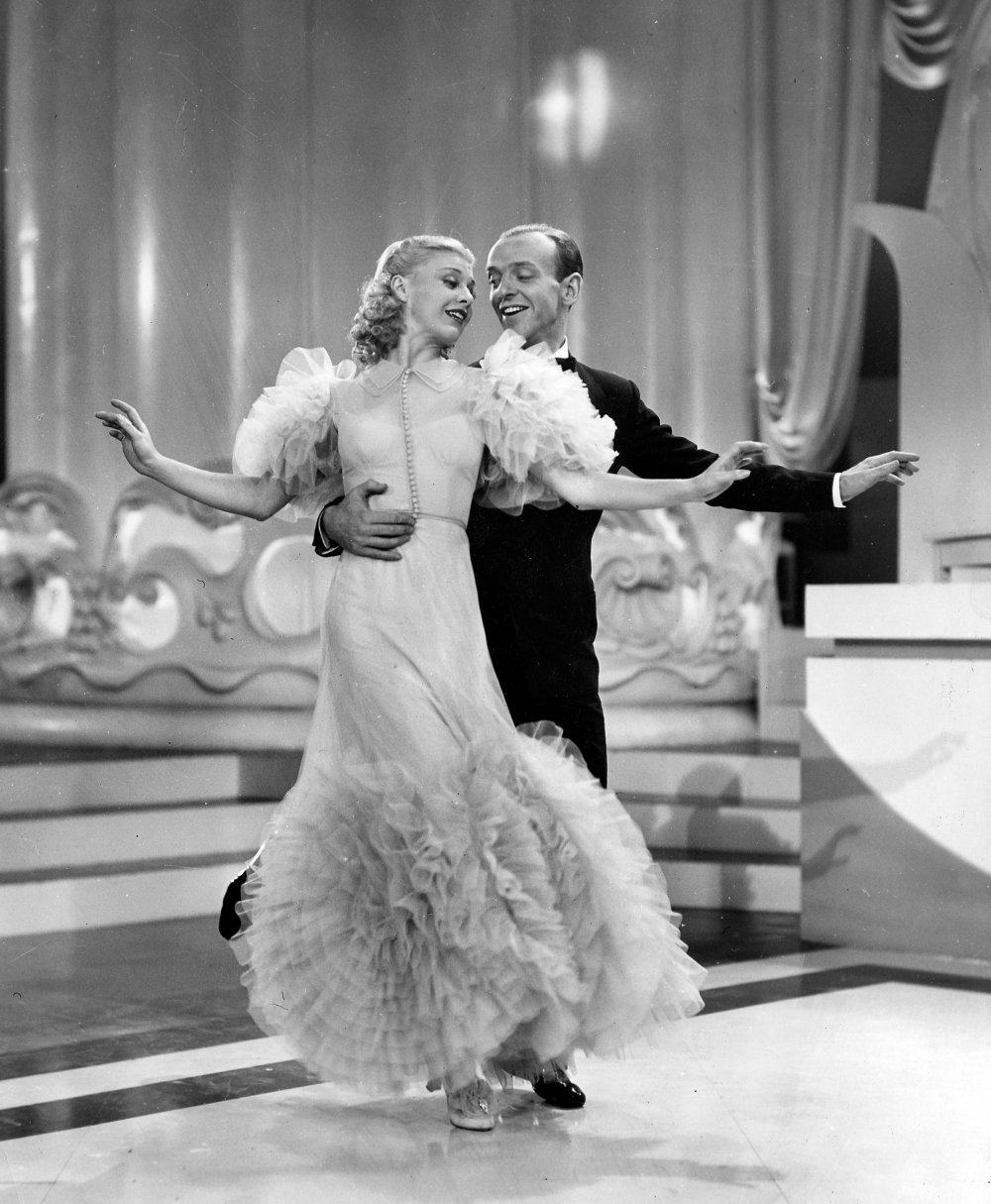 Fred Astaire and Ginger Rogers didn’t waltz very often. But when they did, it was truly memorable. Although their purest waltz would come at the end of The Story of Vernon and Irene Castle (1939), dance critic Arlene Croce was so enchanted by ‘Waltz in Swing Time’ that she declared this dazzling blend of cross-rhythms, innovation and grace: “Two minutes and 45 seconds of unspeakable delight.” Astaire enlisted the help of arranger Robert Russell Bennett and rehearsal pianist Hal Borne to speed up Jerome Kern’s score. Still, while his genius is evident in every step, don’t forget: “Ginger Rogers did everything he did… backwards and in high heels.” 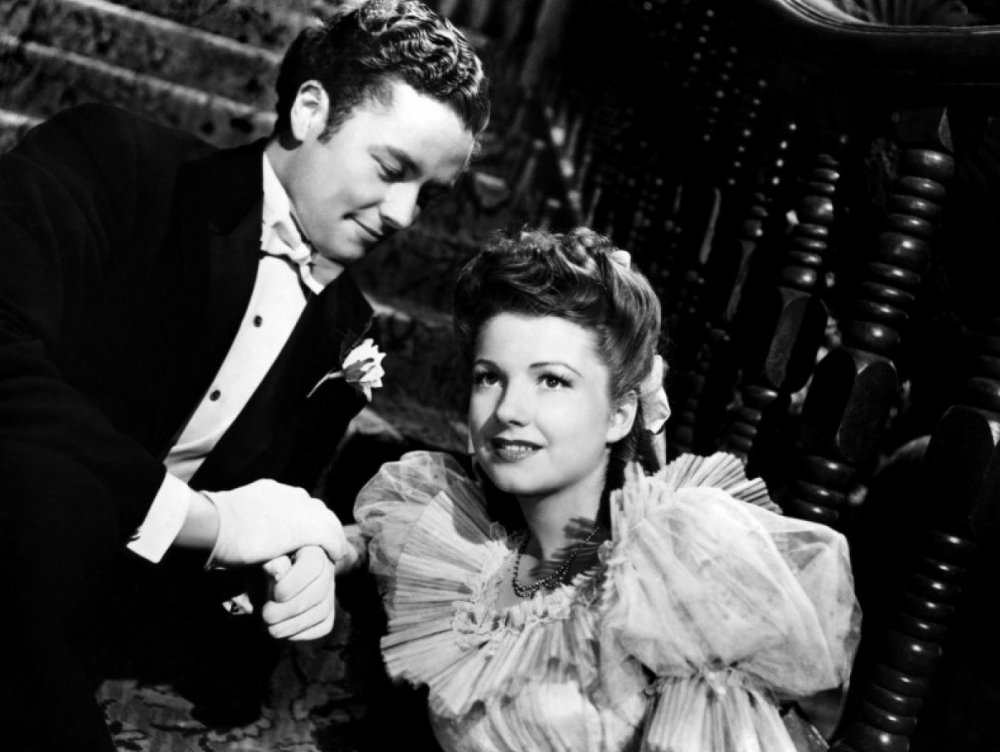 Orson Welles originally filmed the ball sequence in his much-truncated adaptation of Booth Tarkington’s Pulitzer-winning novel in a single crane shot that swooped and swirled over three floors and through four rooms in the Amberson mansion. But, even though the RKO philistines fragmented the sequence and bowdlerised Welles’s meticulous camera choreography, they couldn’t destroy the aching sense of nostalgia and regret that permeates the image of old flames Joseph Cotten and Dolores Costello waltzing in the empty ballroom. It’s the end of the evening, and his daughter (Anne Baxter) and her son (Tim Holt) watch from the foot of the stairs. A poignant intimation of what might have been. 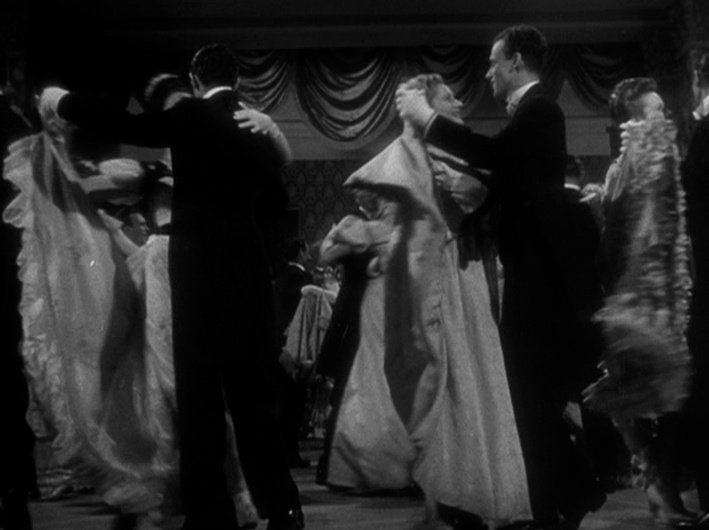 Only Alfred Hitchcock would employ a waltz to imply a telepathic link between two of his characters. Ernst Lubitsch had made similarly intriguing use of Franz Lehar’s music in The Merry Widow (1934), but Hitchcock imparts a sinister twist, recycling the opening credits image of waltzing couples on three further occasions as Charlie (Teresa Wright) comes to suspect that her adored Uncle Charles (Joseph Cotten) is a serial killer. Critics are divided on the precise meaning of the motif, but its reappearance after the exchange of a ring, the perusal of a newspaper and a struggle on a train confirm that Charlie is no longer in tune with her idol. 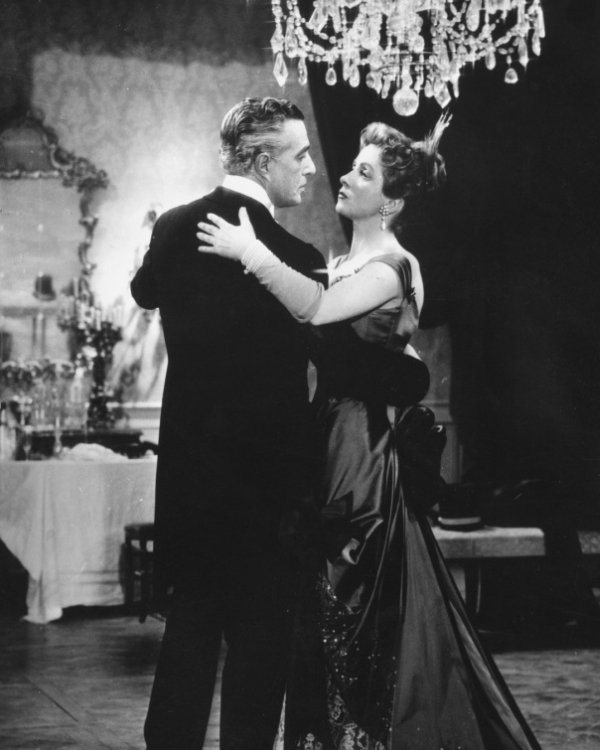 Critic Andrew Sarris once said of Max Ophüls: “He gave camera movement its finest hours in the history of cinema.” But the German-born auteur behind the majestic dissolve montage in this period masterpiece was more modest in claiming that “exact details, an artful little nothing, make art”. Meeting at balls a fortnight, two days and 24 hours apart, general’s wife Danielle Darrieux and Italian diplomat Vittorio De Sica glide gracefully past mirrors, paintings and potted plants as flirtation turns to passion. But the seal is set on their romance during the last waltz: as the musicians pack up, the servants extinguish the candles and a black sheet is thrown over a harp. 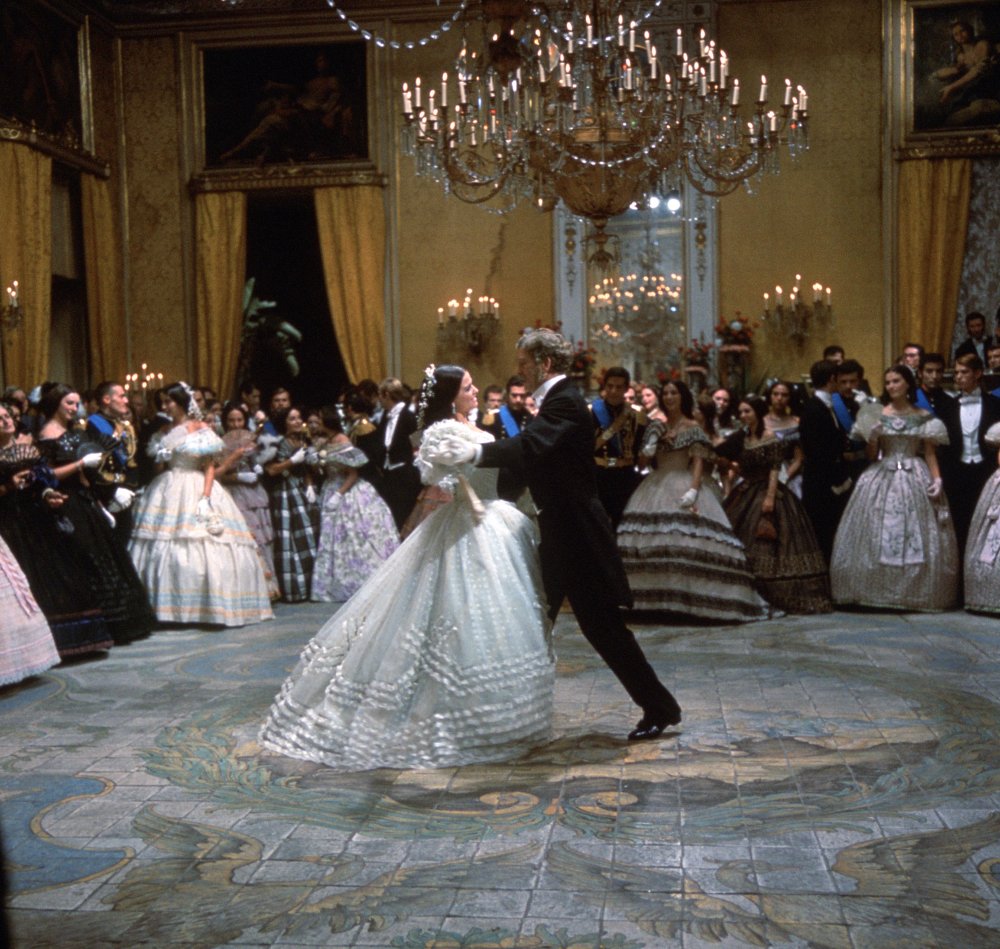 Opening on a crowded dance floor, the ball sequence takes up the final third of Luchino Visconti’s epic adaptation of Giuseppe Tomasi di Lampedusa’s novel. Two hundred characters mill through 13 rooms to Nino Rota’s sublime score, as Visconti gathers the aristocracy, military and bourgeoisie to personify the epochal shift that brings Prince Salina (Burt Lancaster) to the verge of despair. Yet, despite witnessing the dusking of his era, Salinas still has the good grace to waltz with Angelica (Claudia Cardinale), the low-born fiancée of his nephew, Tancredi (Alain Delon), who encapsulates the spirit of ‘trasformismo’ with the words: “If we want things to stay as they are, things will have to change.” 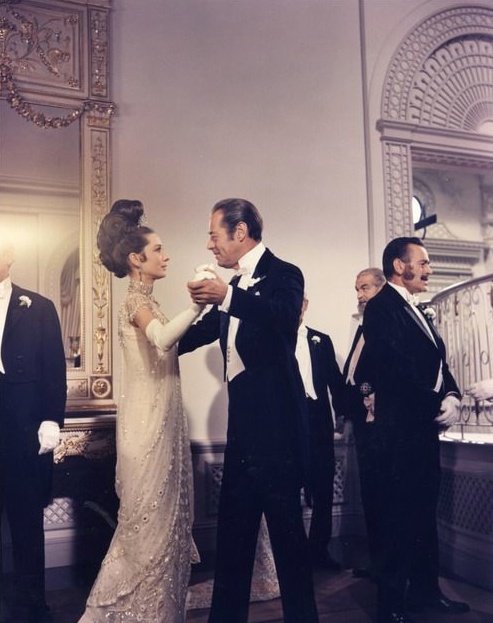 Less of a showstopper than the amusingly mannered ‘Ascot Gavotte’, the embassy ball waltz in My Fair Lady (a musical version of George Bernard Shaw’s play Pygmalion) proves a crucial moment in phonetics professor Henry Higgins’s bid to win a bet that he can transform Cockney street urchin Eliza Doolittle into a lady. The dance between Wendy Hiller and the prince in Anthony Asquith’s 1938 version of the story, Pygmalion, is delightful. But, wearing an antique gown that caused the crew to burst into spontaneous applause when she arrived on set, Audrey Hepburn sends tingles down the spine, as she takes turns around the floor with Transylvanian prince Buddy Bryant, Rex Harrison’s Higgins and his snooping star pupil, Theodore Bikel. ‘I Could Have Danced All Night’, indeed. 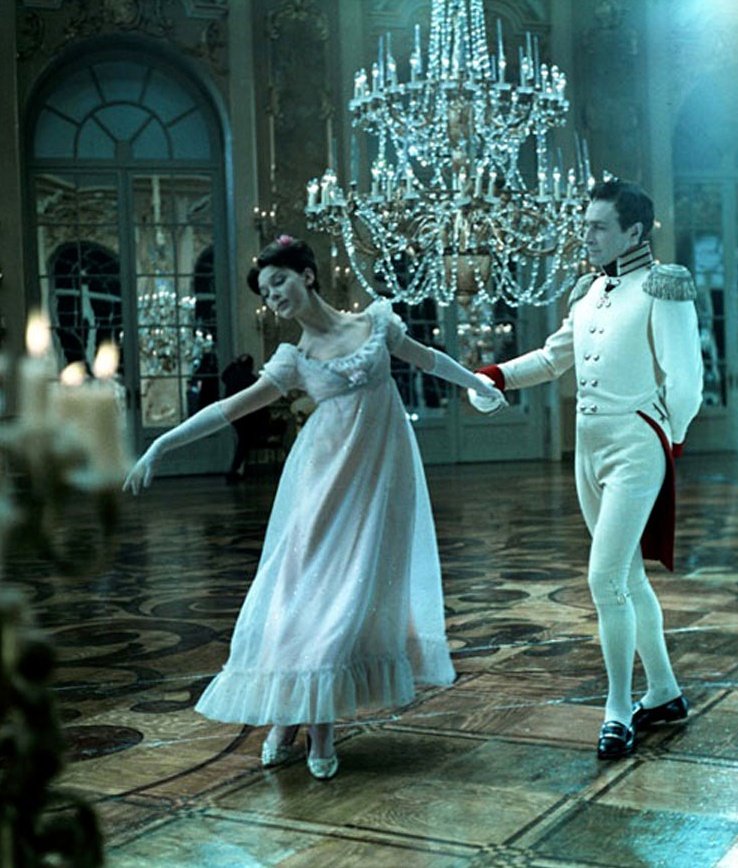 Elaborating on the quaint intimacy of Audrey Hepburn and Mel Ferrer dancing in King Vidor’s 1956 Hollywood version of Leo Tolstoy’s masterwork, and anticipating the involved intrigue of the pre-battle ball in Waterloo (1970), Sergey Bondarchuk captures the giddy exhilaration of first love with the waltz sequence in the second part of his magisterial tetraptych, which took five years to complete. A trained ballerina, Ludmila Savelyeva is exquisitely light on her feet, as she and Vyacheslav Tikhonov flit in and out of waltz hold to Vyacheslav Ovchinnikov’s effusive score. But what makes this so thrilling is the camera’s agility before it swoops upwards into a travelling top shot. 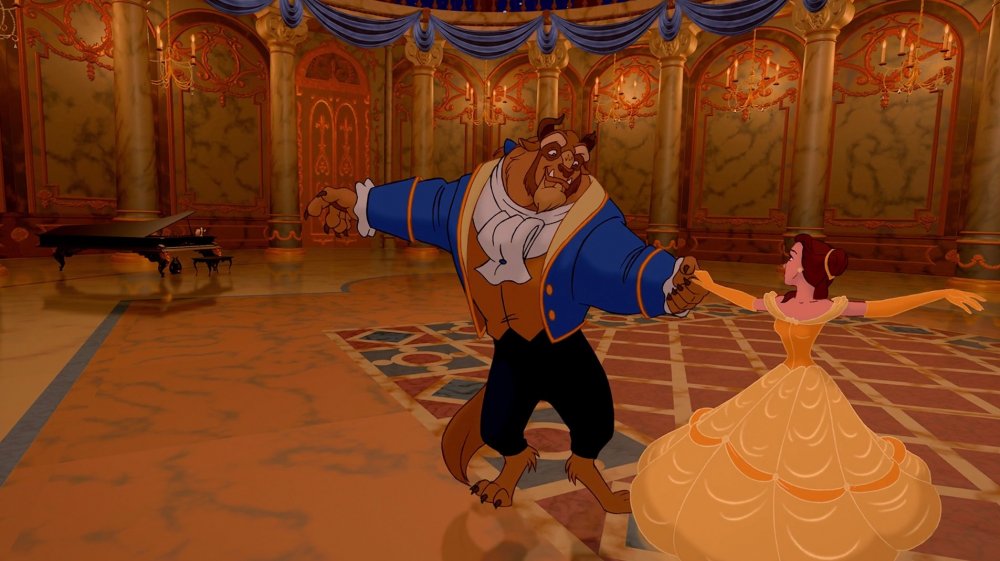 The waltz is so synonymous with screen romance that when the king sees Prince Charming kissing the hand of a mysterious ball guest in Cinderella (1950), he orders the orchestra to switch to three-four time and retires to bed to await news of a marriage proposal. The spirit of that film’s ‘So This Is Love’ is channelled into Howard Ashman and Alan Menken’s Oscar-winning title song in Beauty and the Beast, as Disney once again demonstrates the waltz’s potency in its studio-saving adaptation of Jeanne-Marie Leprince de Beaumont’s beguiling fairytale, as Belle and the Beast sashay and sway around the cavernous ballroom to the charmingly faltering crooning of Angela Lansbury’s Mrs Potts. 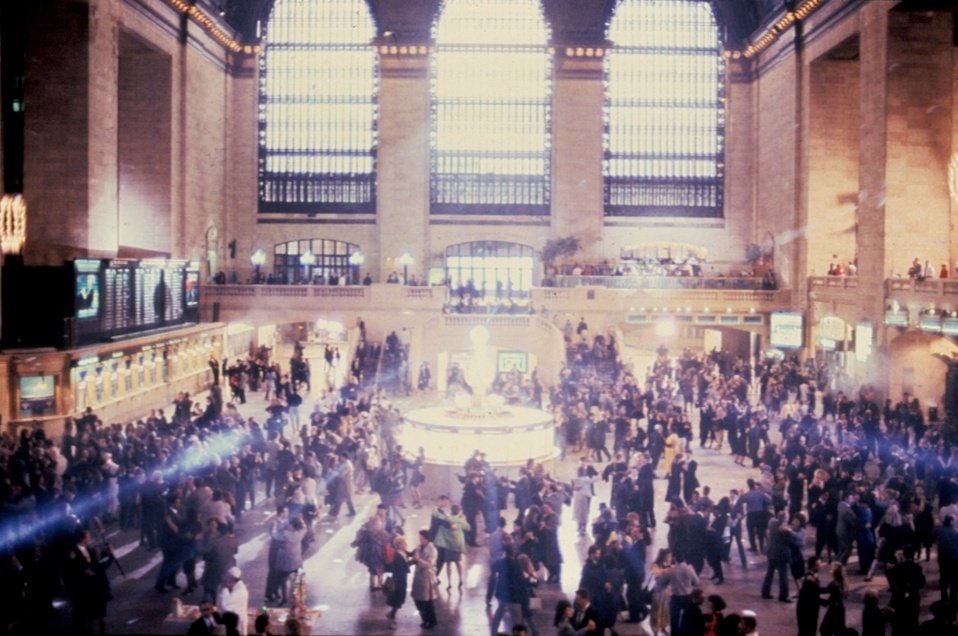 In Richard LaGravenese’s original script for The Fisher King, traumatised hobo Robin Williams spots shy office worker Amanda Plummer during a homeless woman’s recital for passengers on a subway train. But, while scouting New York’s Grand Central station, Terry Gilliam got the idea of having the besotted Williams pursue the oblivious Plummer through hundreds of strangers waltzing across the rush-hour concourse. Much to his horror, Gilliam discovered that many of the extras couldn’t dance and required an impromptu lesson before the all-night shoot could commence. Consequently, Gilliam overran and real commuters started mingling with the extras. Not that you’d know from watching the joyous melée unfolding to George Fenton’s Gershwin-inflected score. 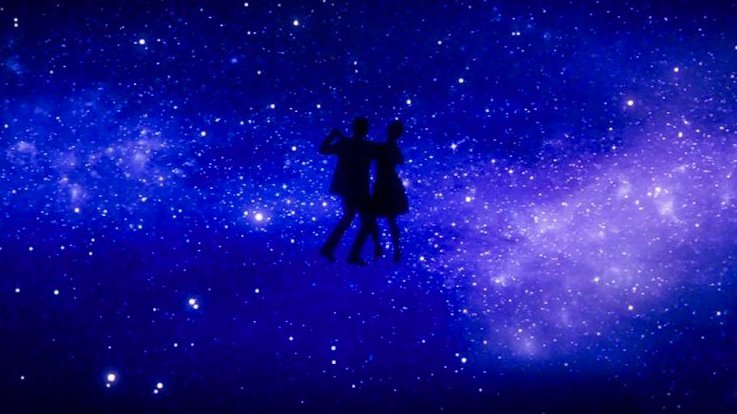 It hardly matters whether the silhouettes in the ‘gravity free’ waltz at Griffith Observatory are Emma Stone and Ryan Gosling or stunt doubles Emilie Livingston and Artem Chigvintsev. Taking cues from Disney’s Sleeping Beauty (1959) and Beauty and the Beast (1991) and Pixar’s WALL-E (2008), this heavenly homage to Fred and Ginger’s challenge dances begins beside the Foucault pendulum before moving into the déco recreation of the planetarium, where Mia and Sebastian float on air before returning to terra firma to kiss. But the starry magic returns in the epilogue reverie, which recalls the twinkling setting Norman Taurog used for Astaire and Eleanor Powell beginning their beguine in the 1940 classic Broadway Melody of 1940.