Many a modern cinematic genre found its roots in the pioneering films of Weimar Germany. We trace six examples through a century under the influence. 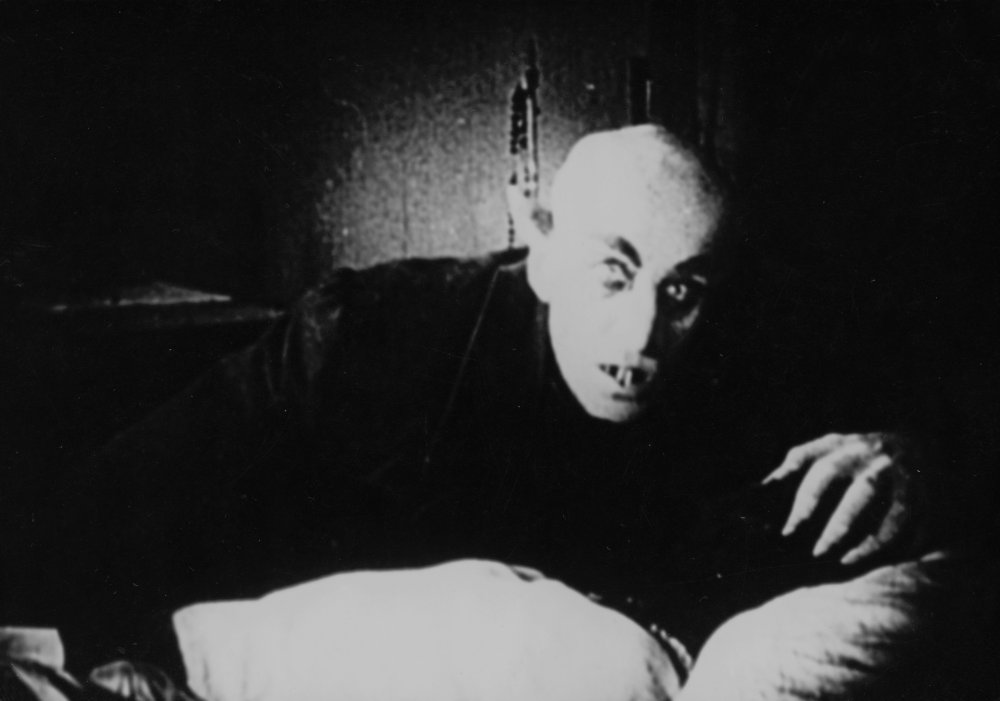 Though best known as the era of Expressionism, the cinema of Weimar Germany was far more multifaceted than its general reputation suggests – from drama to comedy to avant-garde animation, Weimar cinema had it all. With pioneering figures like Fritz Lang and F.W. Murnau at the helm, many Weimar films proved to be groundbreaking masterpieces that paved the way for future generations.

Here, we take a look at just six of the many genres that took shape in Weimar Germany and examine how their influence has helped define modern cinema. 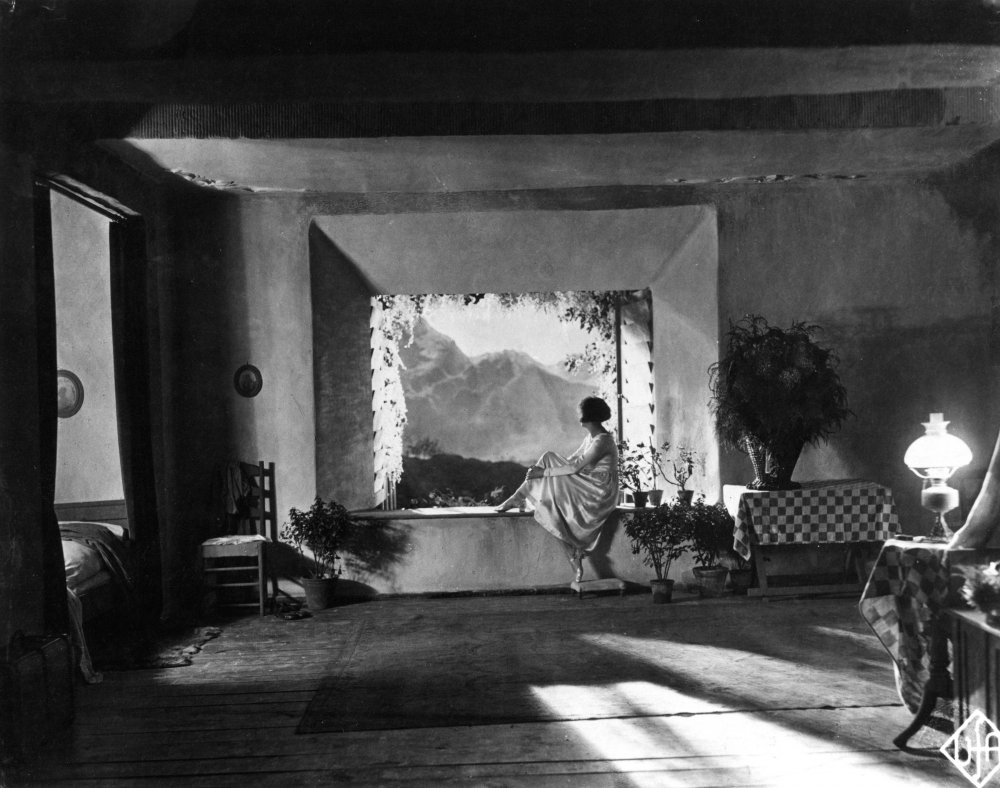 Arguably the most specifically German genre of all, the bergfilm was dominated by the work of Dr Arnold Fanck (who held a PhD in geology). With titles like The Holy Mountain (1926), The White Hell of Pitz Palu (1929, co-directed with G.W. Pabst), Storm over Mont Blanc (1930) and S.O.S. Eisberg (1933), Fanck’s films combined daring cliff-edge antics with romantic intrigue. His regular leading lady, Leni Riefenstahl, also went on to make her own important mountain film, The Blue Light (1932).

Shot largely on location, the mountain films revelled in their surroundings, imbuing nature with a sense of mystic awe. With their frequent focus on winter sports and climbing, they contained the elemental sense of danger found in modern documentaries like Touching the Void (2003), Meru (2015) and Free Solo (2018), as well as in fictional counterparts like Cliffhanger (1993) and Vertical Limit (2000). 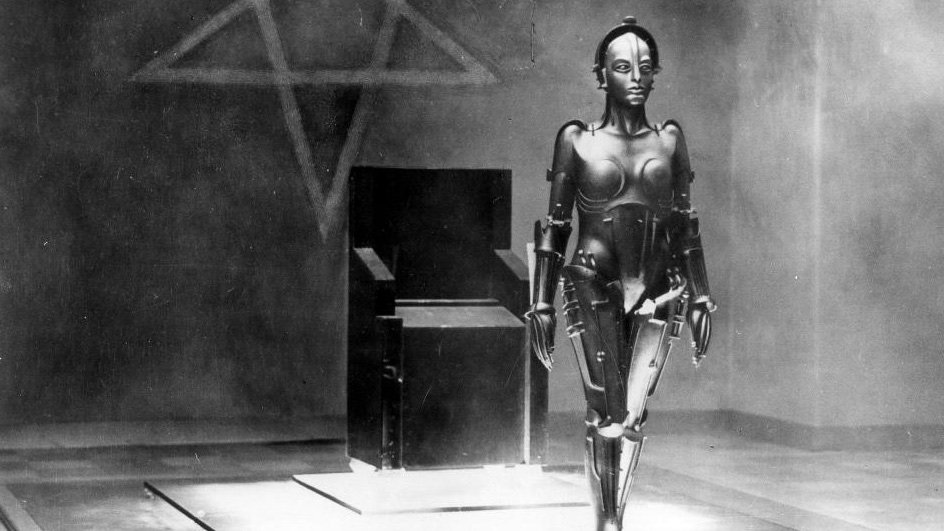 Although (or perhaps because) dystopian sci-fi was not widespread in Weimar cinema, one of the era’s most iconic films single-handedly helped shape the entire genre: Fritz Lang’s Metropolis (1927). With its vision of a city made up of gleaming skyscrapers, the film irrevocably shaped the way that cinema has depicted future cityscapes – see, for instance, Ridley Scott’s Blade Runner (1982).

Yet beneath the pleasure gardens of the idle rich, there lurks a dark underbelly to Metropolis: the worker’s city, where labourers move like zombies to control the machines that run the city above. The idea of a stratified future society had already been seeded in novels like H.G. Wells’ The Time Machine (1895, filmed in 1960 and 2002), but Lang’s startling visualisation captured the public imagination like no other, its impact filtering through to films like Neill Blomkamp’s Elysium (2013).

Another of Metropolis’s many innovations was the Maschinenmensch, a gynoid turned flesh. Robots disguised as humans would go on to become another genre staple, as exemplified by the Terminator (1984-2019) franchise. Lang’s Maschinenmensch, however, is often remembered in her metallic state – perhaps because it helped inspire the design of C-3PO in Star Wars (1977). 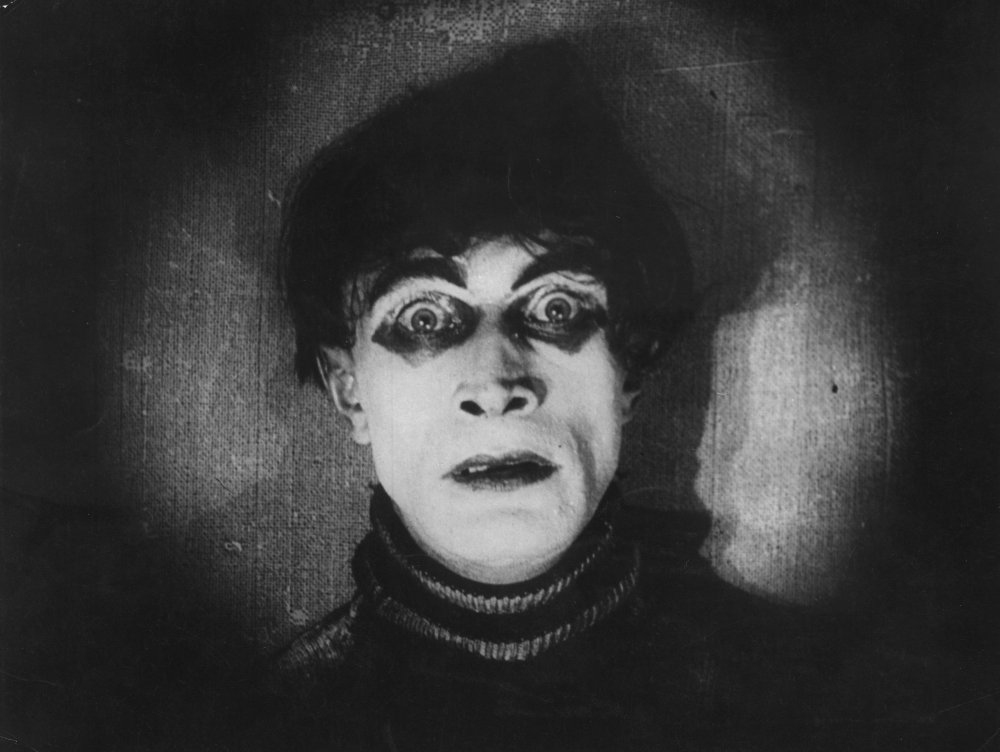 Given the distressed atmosphere of the postwar period, it’s perhaps not surprising that so much of Weimar cinema thrived on horror. In 1919, Richard Oswald’s Eerie Tales pioneered the anthology format, later so beloved by companies like Amicus Productions, but it was Robert Wiene’s expressionistic masterpiece, The Cabinet of Dr. Caligari (1920), that ushered in the craze for tortured, contorted angles. For Nosferatu (1922), an unauthorised adaptation of Dracula, director Murnau amplified Caligari’s shadows to nightmarish degrees, leaving a lasting scar on the public psyche (see, for instance, the explicit homage in 2015’s Crimson Peak).

When Universal produced their own take on Dracula in 1931, it was shot by German cinematographer Karl Freund, who had previously worked on such Weimar horrors as The Golem (1920). Freund would go on to direct The Mummy (1932) and Mad Love (1935), and was far from the only émigré to directly link Weimar horror to Hollywood – among others, there was Paul Leni, who made the influential old dark house picture The Cat and the Canary (1927), and Robert Siodmak, who directed shadowy psychological classic The Spiral Staircase (1946). 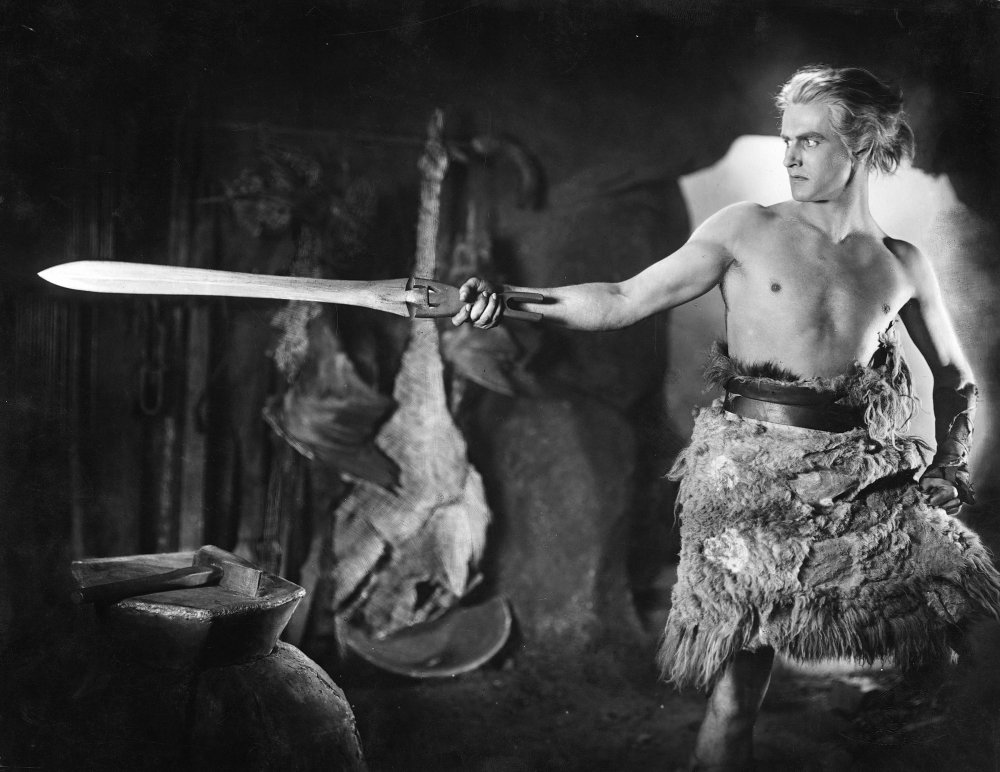 Aspects of the fantastic recur throughout Weimar cinema, often inspired by a fascination with historic myths and the exotic Orient. Films like Ernst Lubitsch’s romantic adventure Sumurun (1920) and Lotte Reiniger’s animated fairytale The Adventures of Prince Achmed (1926) drew inspiration from One Thousand and One Nights, paving the way for later works such as Disney’s Aladdin (1992), the eponymous hero of which appears in Reiniger’s film.

Meanwhile, adventure films such as Joe May’s The Indian Tomb (1921) and Lang’s The Spiders (1919) told tales of mystic yogis and lost civilisations, helping to sow the seeds for fantasy-tinged pulp adventures like the Indiana Jones (1981-2008) franchise.

Lang’s later anthology film Destiny (1921) had an almost immediate impact when Douglas Fairbanks ripped off its magic carpet ride for The Thief of Baghdad in 1924, the same year that Lang completed the magnum opus of Weimar fantasy, Die Nibelungen. Based on an epic national poem written around 1200, Die Nibelungen features such genre staples as a fire-breathing dragon, a net of invisibility and huge battle scenes. Released in two parts, it’s a clear progenitor for the blockbuster spectacle of films like The Lord of the Rings (2001-2003). 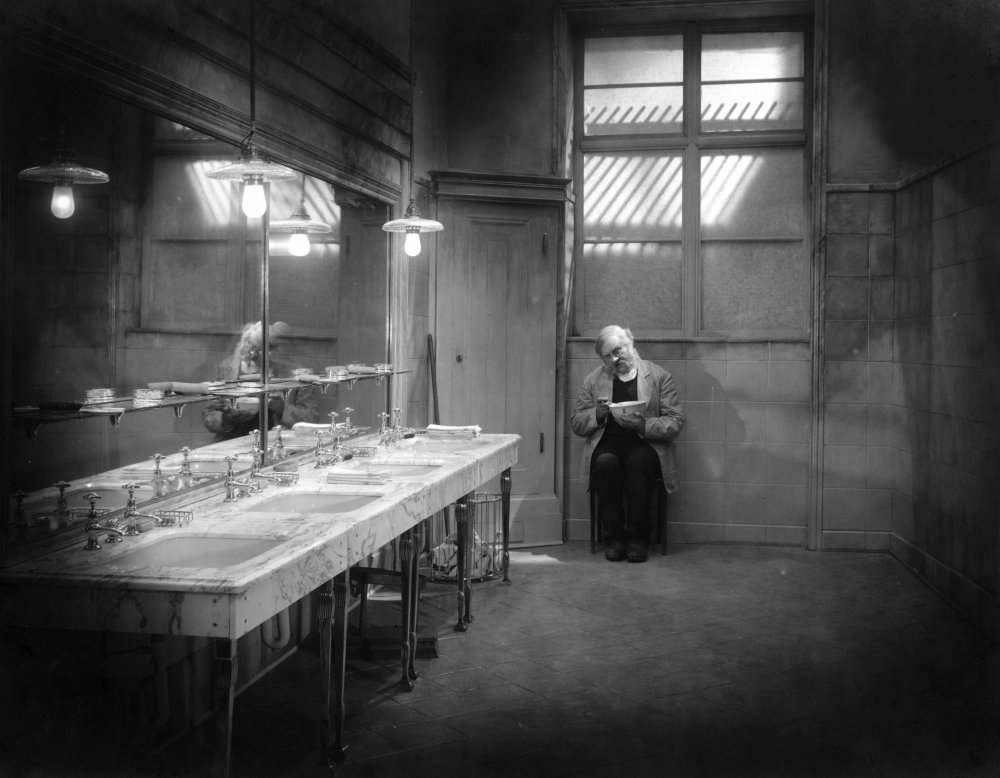 Inspired by the intimacy of Max Reinhardt’s snug Kammerspiele theatre, the Kammerspielfilme presented audiences with interior dramas focusing on character psychology. Initiated by writer Carl Mayer, these chamber dramas were set in a limited number of locations and minimised the use of intertitles. After establishing the genre with films like Leopold Jessner and Paul Leni’s Backstairs (1921) and Lupu Pick’s Shattered (1921), Mayer went on to collaborate with Murnau on Kammerspielfilme like The Haunted Castle (1921) and, most notably, The Last Laugh (1924), about a hotel doorman who is demoted to the role of lavatory attendant.

Though he seldom worked directly in film, Reinhardt’s influence extended over much of Weimar cinema, and beyond. He had been a strong champion of the Swedish playwright August Strindberg, and Strindberg himself had modelled his own Intimate Theatre on Reinhardt’s Kammerspiel Haus. Thus, when Strindberg acolyte Ingmar Bergman made a trilogy of chamber dramas in the early 1960s (Through a Glass Darkly, Winter Light and The Silence), it’s not surprising that they followed in the same vein as the earlier Kammerspielfilme, further proving that intimacy is just as powerful on screen as it is on stage – something also illustrated by recent works like Steven Knight’s Locke (2013). 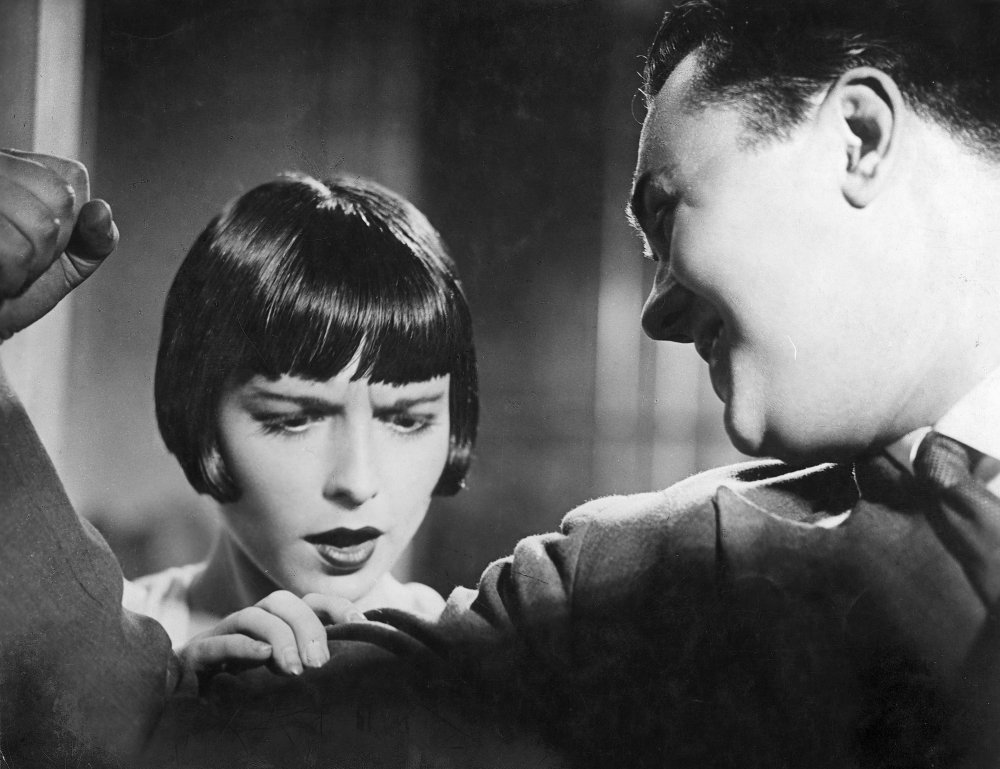 In addition to the copious use of Gothic tropes, another illustration of Weimar cinema’s obsession with the macabre is the large number of serial killers that appear in its films, from Caligari’s knife-wielding somnambulist to Waxworks’ (1924) spectral vision of Jack the Ripper. Even with the rise of the New Objectivity movement, which rejected the ghoulish stylisation of Expressionism in favour of social themes and an increased sense of reality, the preoccupation with killers remained. Indeed, Jack the Ripper returned as a character in G.W. Pabst’s Pandora’s Box (1929), while the same director’s 1931 adaptation of Bertolt Brecht and Kurt Weill’s The Threepenny Opera focused on the aptly named Mack the Knife.

Building on the tenets of New Objectivity, Lang brought an even greater sense of realism to M (1931), which utilised a schematic structure to explore not only the crimes of a child killer, but also the hunt to find the murderer before he can strike again. Allegedly inspired in part by the real-life crimes of Peter Kürten, aka the Vampire of Düsseldorf, M’s approach makes it a significant antecedent for a whole host of ‘real life’ crime films, including David Fincher’s Zodiac (2007).