Legendary comedy duo Stan Laurel and Oliver Hardy worked on more than 100 shorts and feature films together. But which are the best? Here’s the long and the short of it. 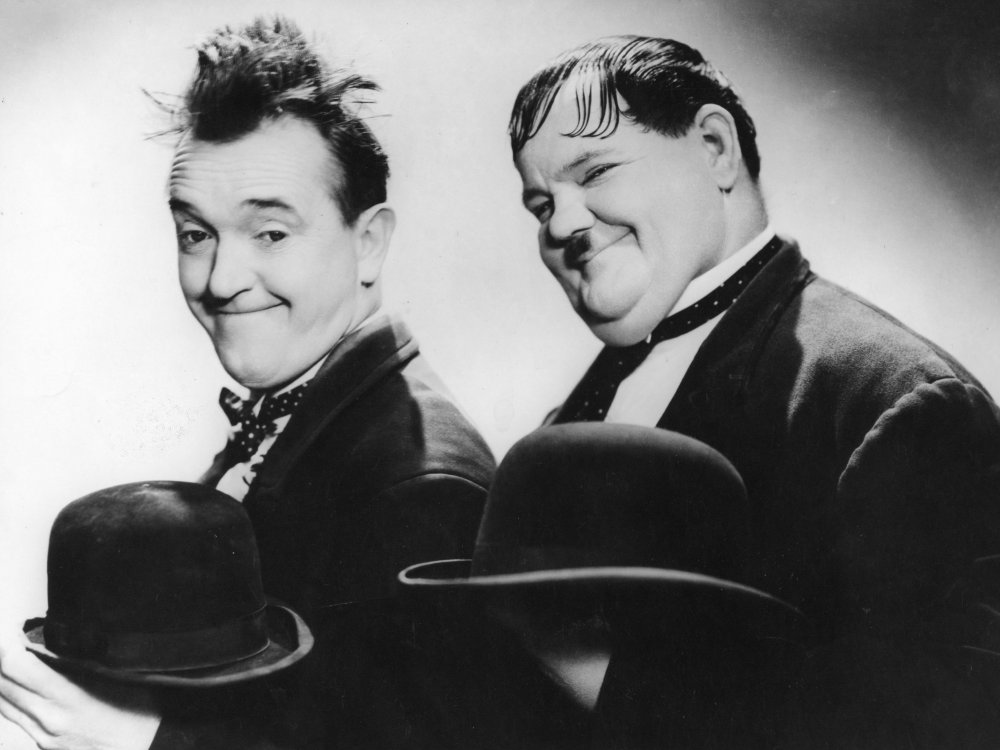 As Robert Youngson noted at the end of the 1966 compilation film The Crazy World of Laurel and Hardy, Stan and Ollie were “two funny gentlemen and two funny, gentle men”. Fate had thrown these two great comics together, and they’d realised that their sole chance of surviving a screwy world lay in sticking together through thick and thin.

Ollie was often bemused by Stan’s cockeyed logic, and Laurel occasionally kicked against Hardy’s Dixie pomposity. Consequently, they frequently fell out and sent simple situations spiralling into chaos. But they needed each other and we still need them in troubled times to remind us to see the funny side.

Their career spanned the tail end of the silent era and the mid-1950s, and their best work is found across both shorts and features, so here’s six of one and half a dozen of the other. 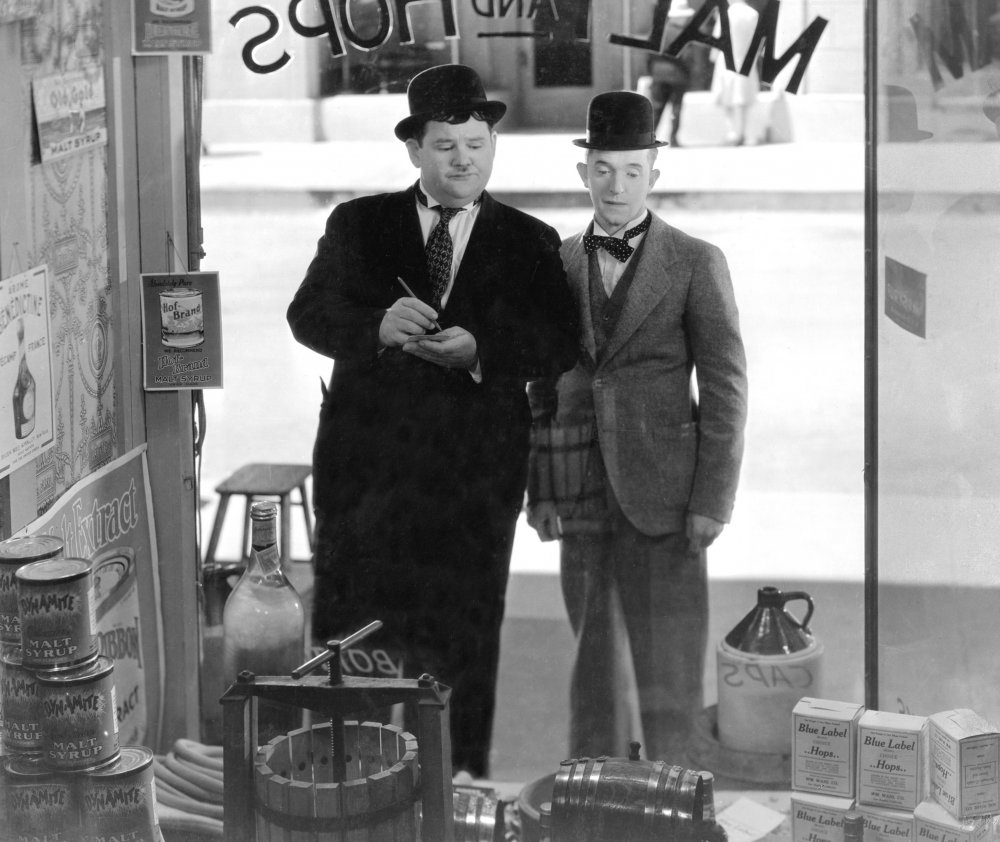 A year passed between the preview of The Rap in August 1930 and its eventual release under the title Pardon Us the following August. Scenes involving a booby-trapped gift, a fire rescue and some old-age reminiscences were shot and discarded, as Laurel trimmed 14 minutes from an episodic storyline that pitched Stan and Ollie behind bars after brewing some bootleg beer.

Despite Stan’s delightful dance to ‘Lazy Moon’, the blackface sequence sits awkwardly (especially in the colourised version). But the running razzberry gag and the exchanges with old lag Walter Long and teacher James Finlayson still amuse. 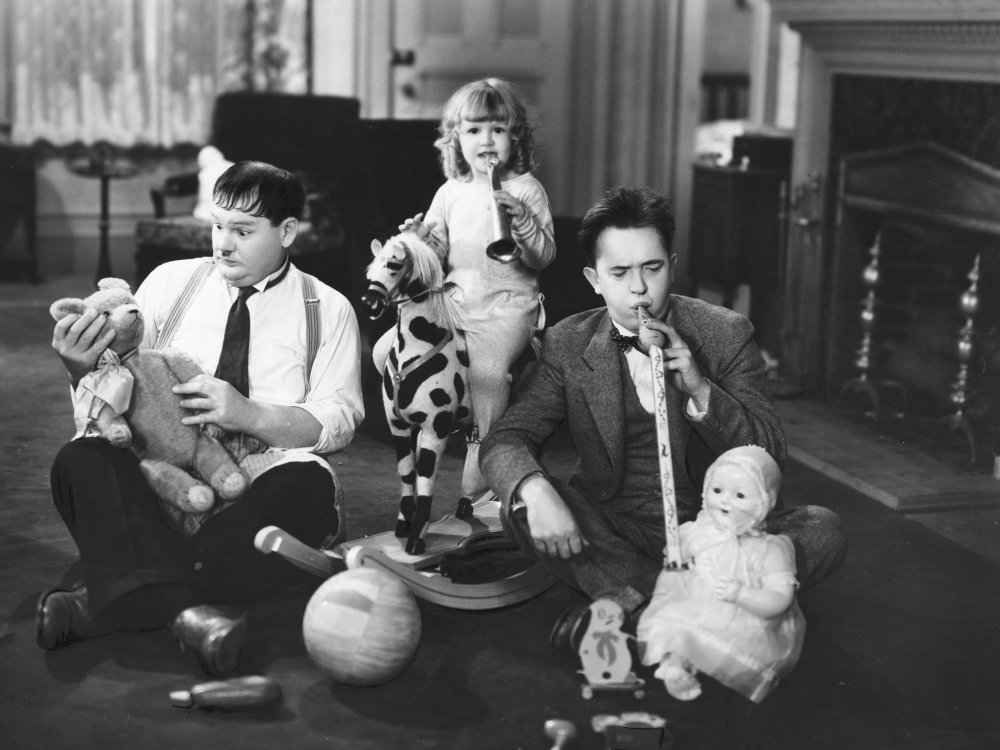 Aware that Pardon Us had lacked coherence in being expanded from a two-reeler, producer Hal Roach decided that Laurel and Hardy’s second feature should have a through story. It centred on their return from the trenches to deliver a fallen buddy’s orphaned daughter to her grandparents and was much criticised for its sentimentality.

Yet wisps of social critique colour the scenes with stepfather Rychard Cramer and banker Richard Tucker. Moreover, the segment in which Stan and Ollie make young Jacquie Lynn feel at home is charming. The laughs, however, come with the pair in uniform, as they fall foul of drill sergeant Frank Brownlee and general James Finlayson. 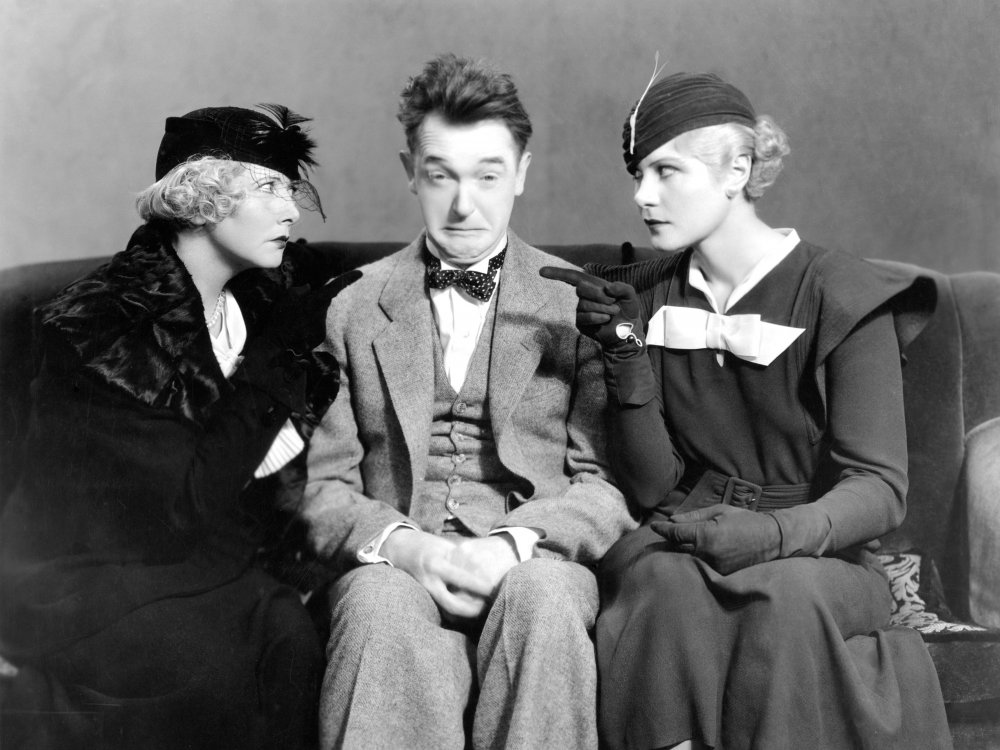 Laurel and Hardy found matrimony a struggle on and off screen and they pay the price for deceiving wives Dorothy Christy and Mae Busch in this gleeful caper, which proved so popular that it inspired the name of the twosome’s fan club. Revisiting the shorts We Faw Down (1928) and Be Big! (1931), Laurel shifted the emphasis from slapstick to situation and character, as Ollie feigns illness so that he and Stan can attend the Chicago jamboree being held in their honour by their lodge.

There are still several choice set-pieces, however, involving some wax fruit and a cameoing Charley Chase, while the punchline twist is a doozy. 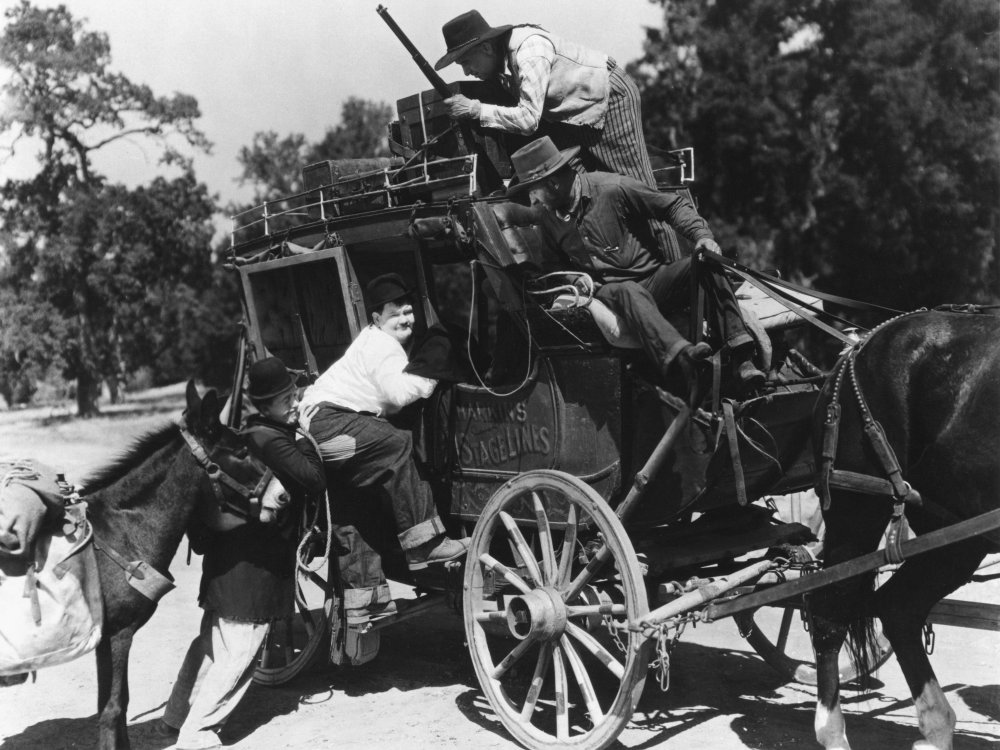 In 1975, when Stan and Ollie dominated holiday telly schedules, they reached number two in the UK charts with a rendition of ‘The Trail of the Lonesome Pine’, a song that sums up the enduring appeal of this deftly parodic western. However, their soft-shoe routine to ‘At the Ball, That’s All’ better epitomises the gauche grace that underpinned Laurel and Hardy’s clowning.

In Brushwood Gulch to give the deeds to a mine to the daughter of their late partner, The Boys are duped by avaricious saloon owner James Finlayson and his brassy wife, played by Sharon Lynne, who tickles Laurel into a state of helpless hilarity during the masterly bedroom chase sequence. 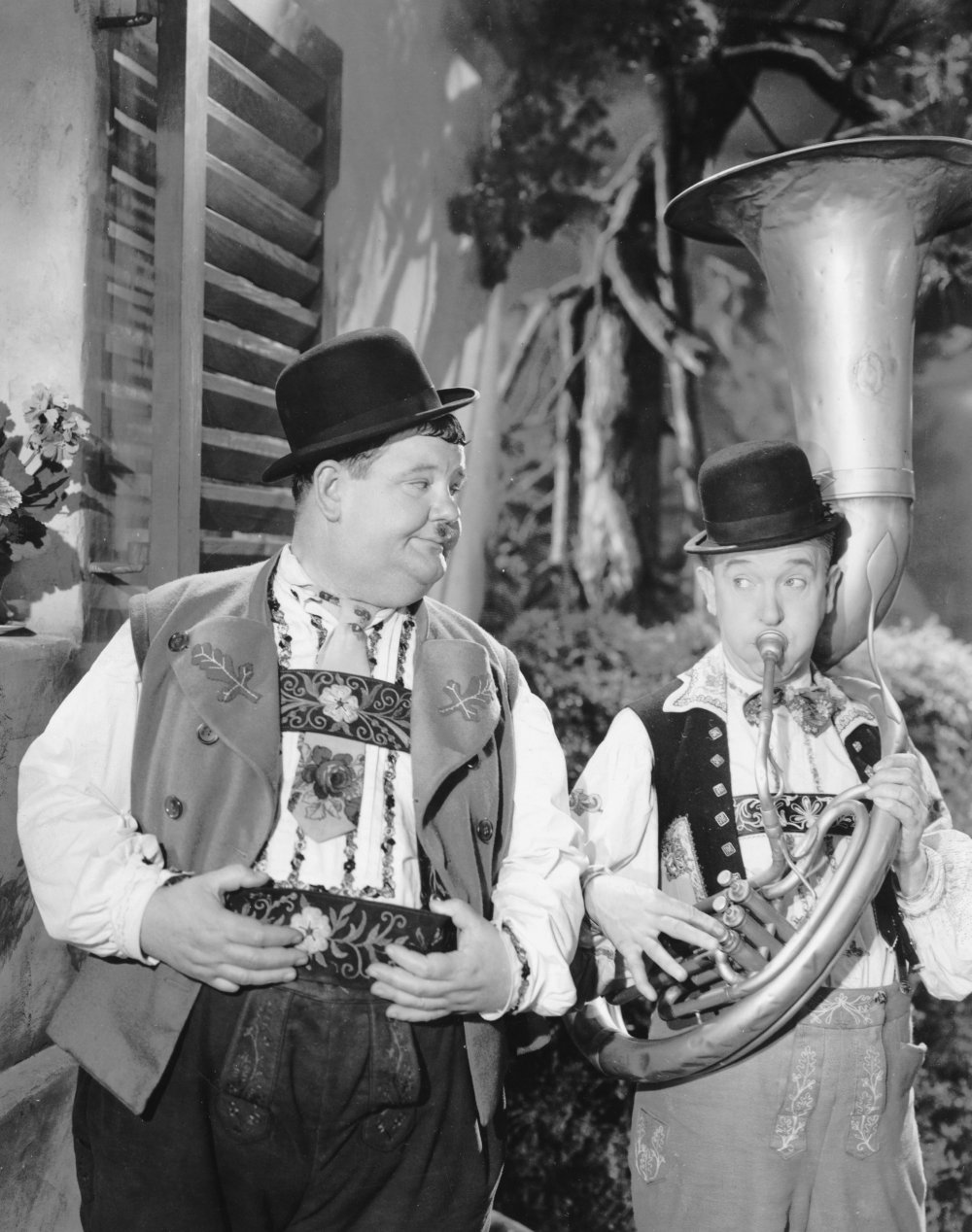 Following Fra Diavolo (1933), Babes in Toyland (1934) and The Bohemian Girl (1936) in blending operetta and shtick, this puzzlingly maligned saga follows Stan and Ollie to Switzerland to sell mousetraps, because there’s so much cheese.

The subplot involving composer Walter Woolf King and diva wife Della Lind is no flimsier than similar conceits in Marx Brothers vehicles, while the set-pieces have a surreality that is absent from Laurel and Hardy’s other feature outings. Witness Stan creating a blizzard of goose feathers to get at a St Bernard’s brandy keg, a gorilla blocking a piano’s transit over a rope bridge and Stan accompanying Ollie’s lovesick serenade on a tuba. 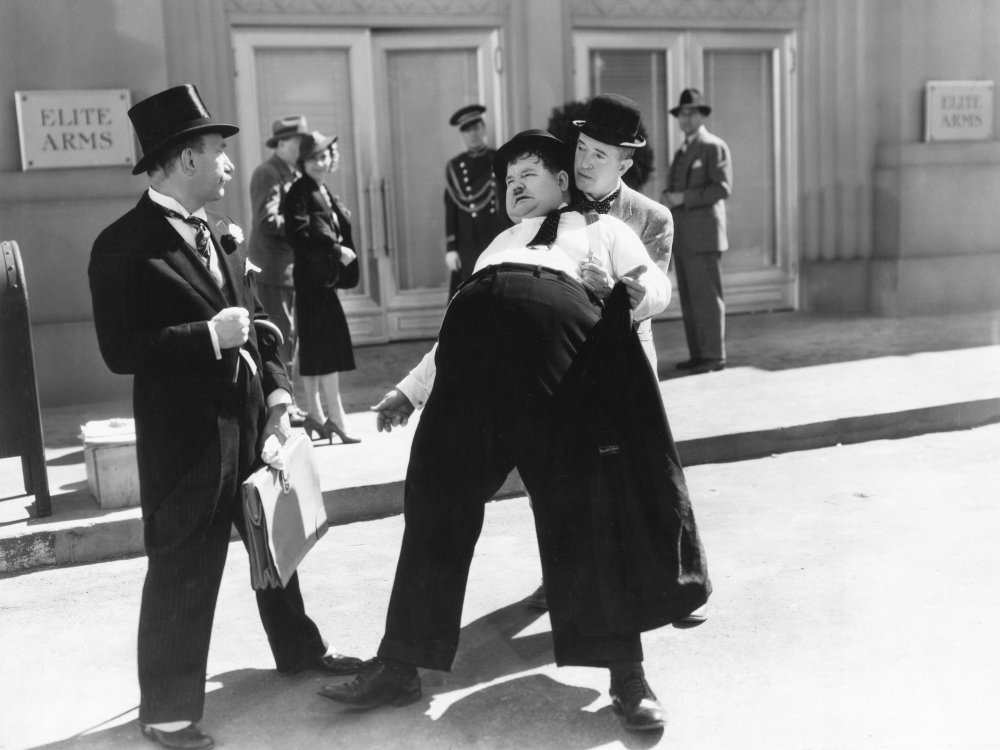 Block-Heads proved to be director John G. Blystone’s final film, as he died shortly before its release at the age of 45. The duo would miss his steadying influence, as the quality of their features began to decline after this enjoyable rehash of Unaccustomed as We Are (1929). It sees Ollie offer Stan a temporary billet after he is discovered guarding his Great War trench two decades after the Armistice.

Silent star Harry Langdon contributed gags, as Stan has problems with Ollie’s new car and some kitchen chaos is followed by the need to hide a big-game hunter’s half-dressed wife. 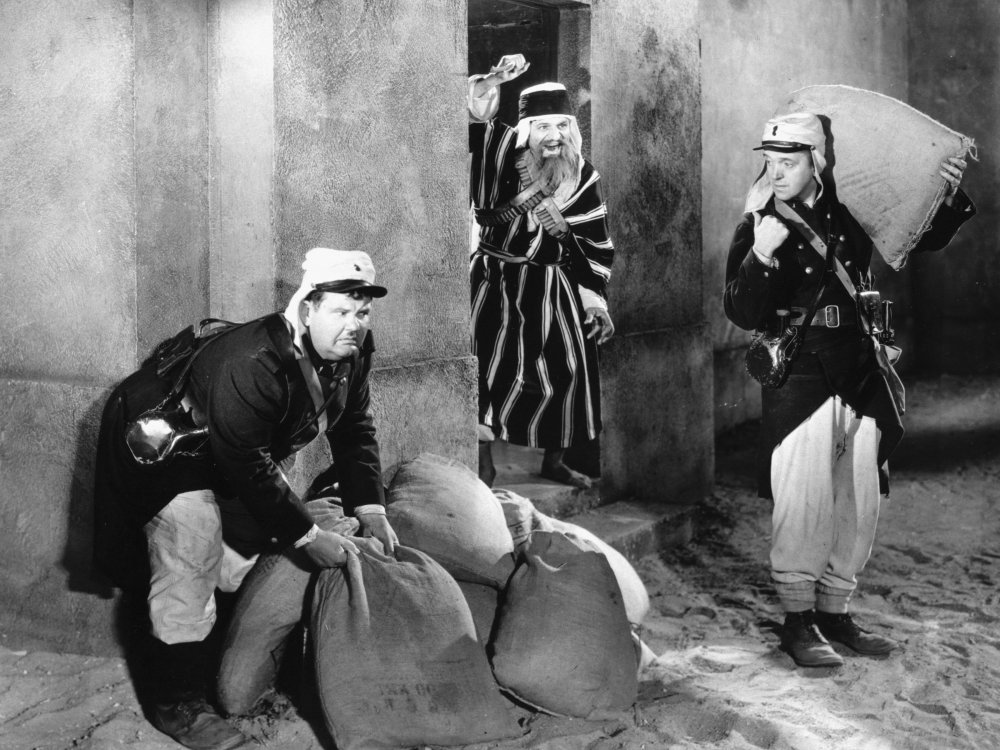 Laurel and Hardy produced 10 shorts in 1931, with Chickens Come Home, Come Clean and One Good Turn ranking among their funniest. But Hal Roach so admired this lampoon of Beau Geste that he let it sprawl to four reels and bore the loss of charging exhibitors the standard two-reel rate.

Heartbroken at being jilted by his sweetheart, Ollie coerces Stan into joining him in the Foreign Legion, where they endure the wrath of Fort Arid commandant Charles Middleton and an attack by the Riffs. They’re on peak verbal and visual form during the repartee over the snapshot of an uncredited Jean Harlow and the exquisite post-march foot massage. 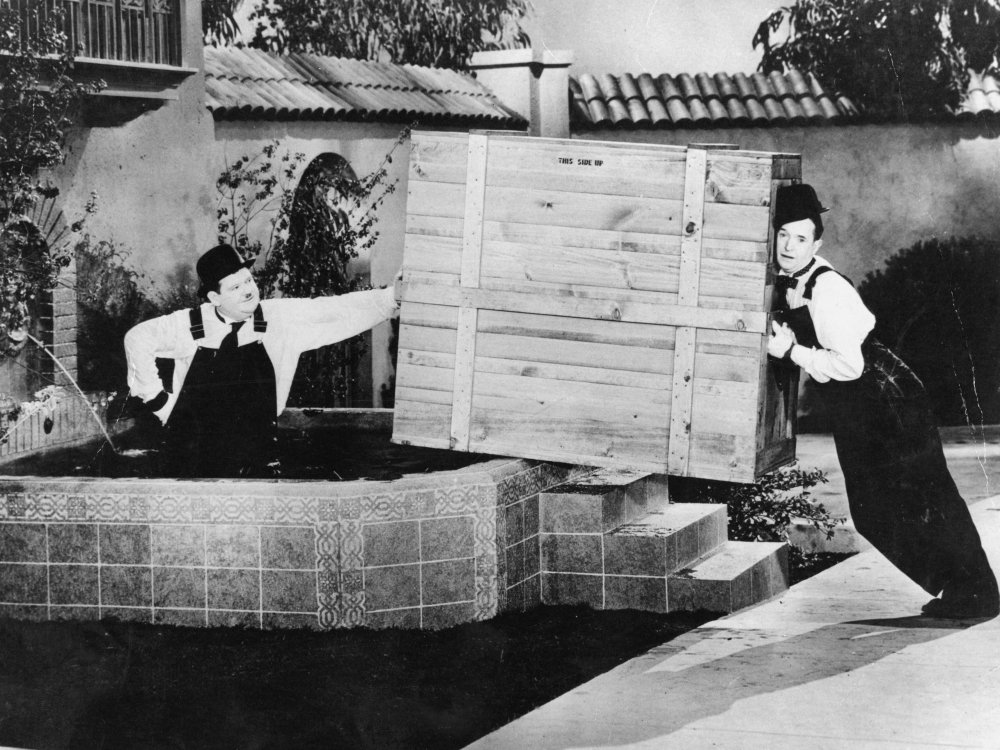 The winner of the inaugural Academy Award for best short (comedy) took Oliver Hardy back to the 131 steps at Vendome Street in the Silver Lake district of Los Angeles that he had previously visited with Charley Chase in Isn’t Life Terrible? (1925) and with Stan Laurel in the lost silent, Hats Off (1927).

Replacing a washing machine with a player piano, the pair have endless trouble lugging the packing case up the steep steps that nursemaid Lilyan Irene is descending with a pram. It’s tempting to think that Stan was spoofing the Odessa Steps sequence in Battleship Potemkin (1925), especially as he supervised Bert Jordan’s editing. 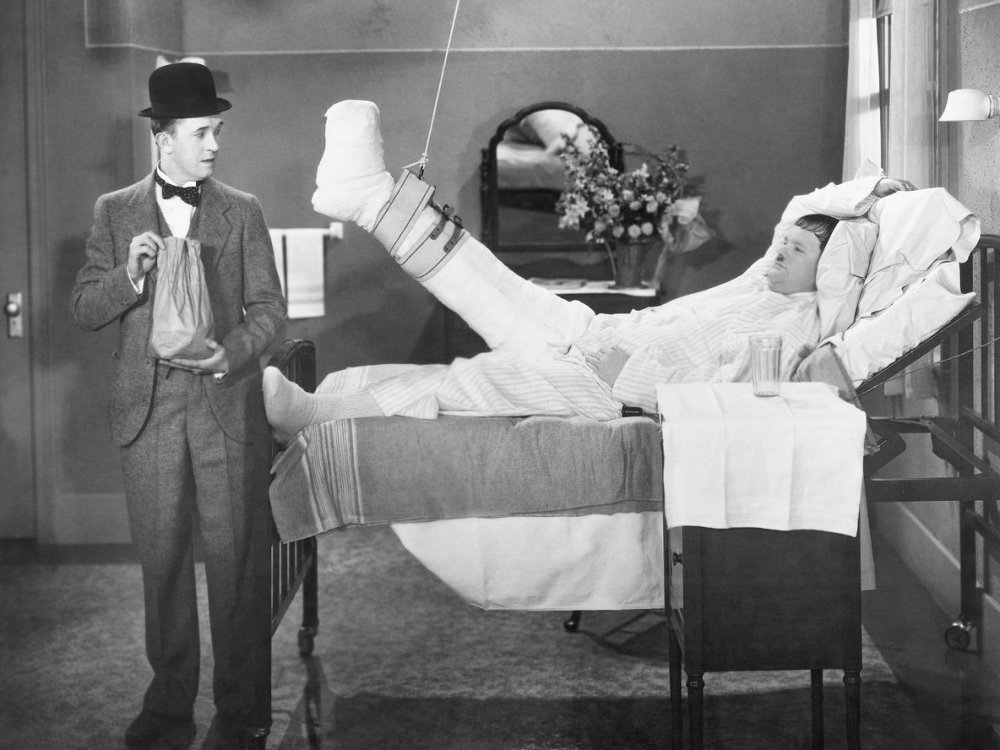 Only Stan could cause so much mayhem with some hard-boiled eggs and nuts. He brings them to cheer up Ollie, who has been hospitalised with a leg break that was almost certainly his friend’s fault. No wonder he fixes the camera with a look of exasperated pathos, as Stan munches his snack with blithe insouciance.

The pair would wind up in hospital again in Thicker than Water (1935), in which a flustered Stan self-reflexively pulls the film’s next scene across the screen in his haste to help the ailing Ollie. 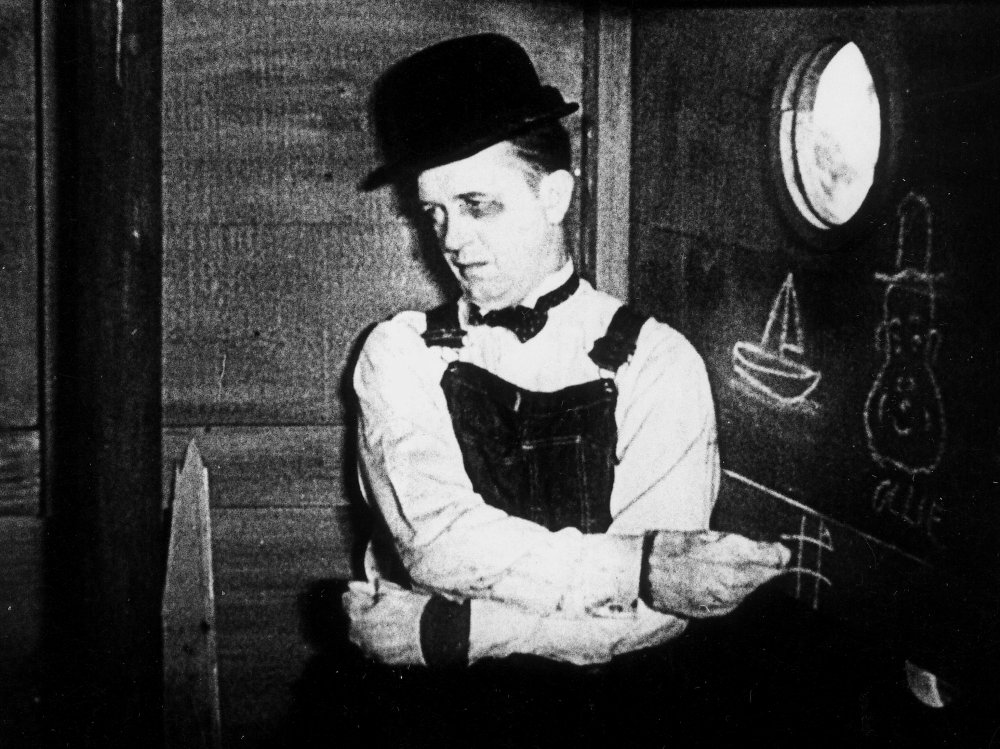 While suffering from writer’s block, Laurel seems to have dusted down a sketch called ‘Live Bait’ after director George Marshall spotted a fish wagon near the studio. What resulted remains one of the most consistently amusing shorts in the entire Laurel and Hardy canon.

Stan’s garbled attempt to explain why they should cut out the middleman by catching their own fish exemplifies Laurel’s later claim that The Boys were “two minds without a single thought”. But his antics after Ollie confines him below deck while renovating a sailing boat in a junkyard confirms Hal Roach’s contention that “each was a perfect straight man for the other”. 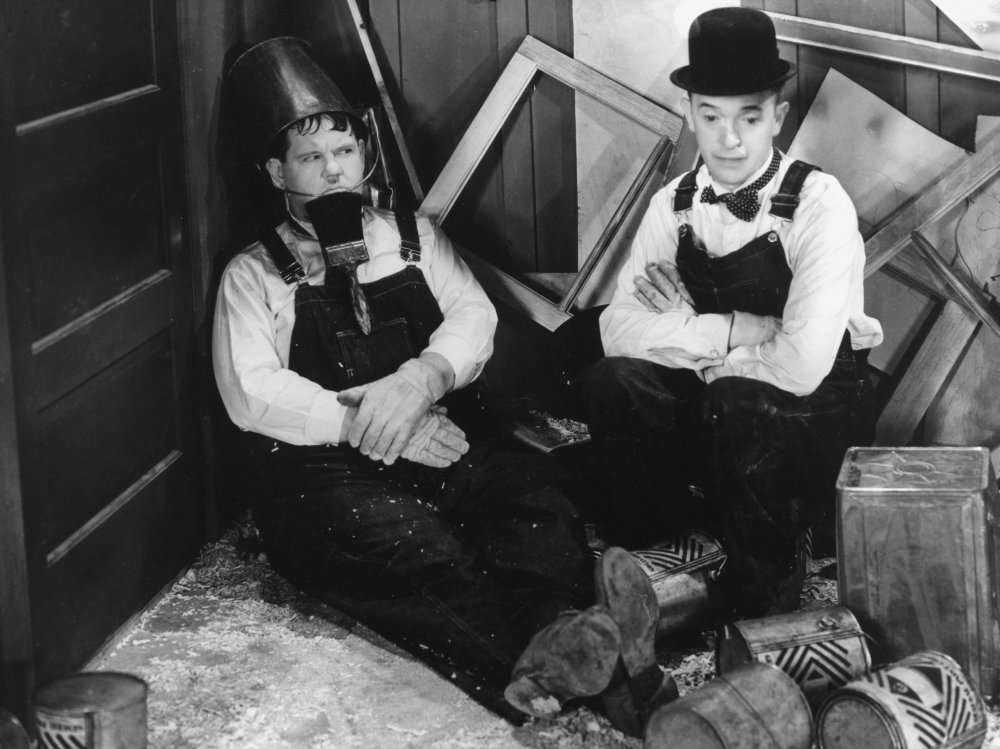 Laurel and Hardy’s heyday coincided with the Great Depression and they were frequently depicted on their uppers in the likes of Below Zero (1930) and Laughing Gravy (1931). Yet when they did find gainful employment, as in Helpmates (1932) and Dirty Work (1933), things rapidly escalated out of control.

What sets this Lloyd French short apart, however, is that the comedy emerges out of the situation and snowballs to bring about the destruction of Ollie’s trousers, a glue brush, a shed and a Model T Ford. If it wasn’t for Ollie’s baffling trust in his pal, this would descend into Three Stooge anarchy. Instead, it’s merely another fine mess. 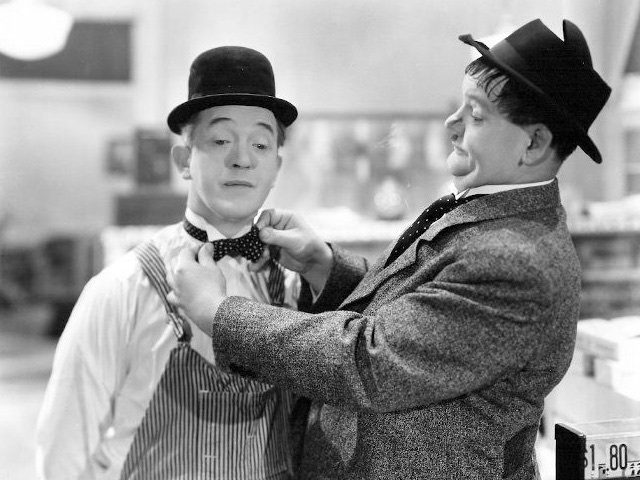 Ever since starting the epic pie fight in The Battle of the Century (1927), Laurel and Hardy had managed to find ways of causing comic carnage. Their sole sequel reunites them with Mae Busch and Charlie Hall, who had been outraged when the duo had accidentally inebriated his wife with spiked spring water in Them Thar Hills (1934).

Thus, when Hall discovers his greengrocers is next door to Stan and Ollie’s electrical goods store, it doesn’t take long for tempers to fray. The acts of reciprocal vandalism exceed those in Big Business (1929), in which James Finlayson had taken exception to their Christmas tree-selling techniques. Their efforts were recognised by the Academy, with Tit for Tat nominated for best live action short (comedy).