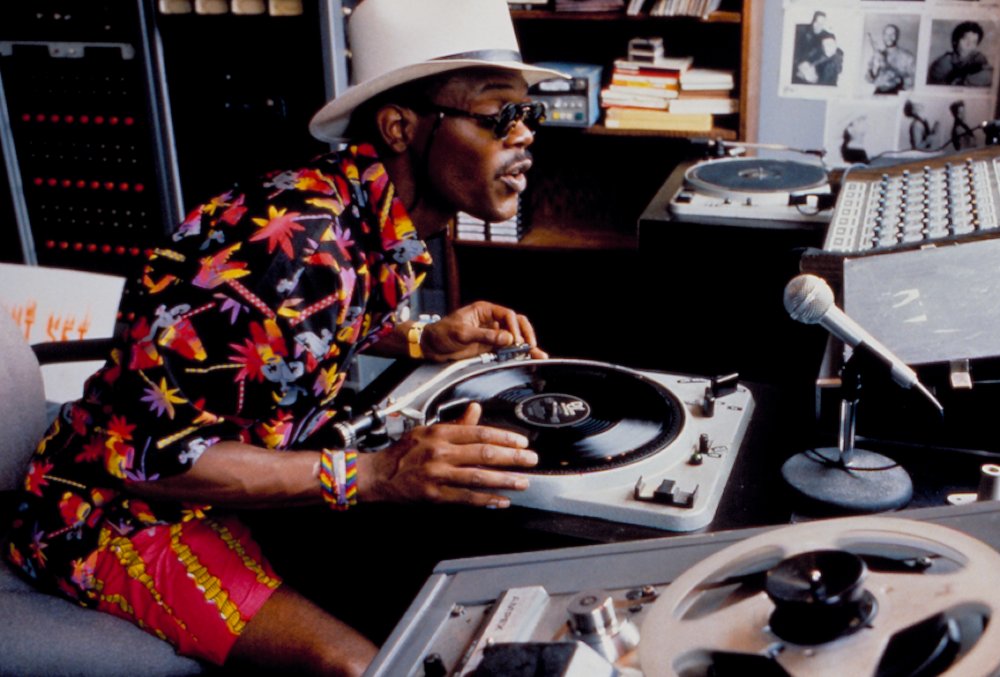 Indeed, whether it’s the pulsating rhythm of the dialogue or an electrifying hip-hop soundtrack, the driving momentum of a Spike Lee joint is the musicality. Take the director’s most recent film, Chi-Raq, a modern remix of Aristophanes’ 411 BC play Lysistrata – now with R&B tunes and an ensemble who curse in verse. Featuring Samuel L. Jackson as a one-man chorus, the outrageous political satire depicts the women of Chicago starving men of sex until local gun crime is solved. The catchy chant: “No peace, no piece.” With emotions expressed via rhyme, and often a melody, the fiery feuds resemble rap battles, if not actual showstoppers, while Father Mike Corridan (John Cusack) conveys his viewpoint through an all-singing, all-dancing church sermon. It certainly gets his voice heard.

Here’s a reminder that Spike Lee’s eclectic filmography doubles as a visual mixtape, with standout musical moments. This is a compilation of his greatest hits.

Lee’s black-and-white debut, She’s Gotta Have It, exuberantly hinted at the director’s stylistic flourishes, particularly his fondness for musical interludes. The Wizard of Oz makeover lands after 30 minutes: Nola Darling (Tracy Camilla Johns) taps her heels and is transported to a Technicolor wonderland – or, rather, a romantic picnic in a graffiti-laden park – to witness a dance routine. The ‘Nola’ tune, composed by Spike’s father, Bill Lee, reflects the film’s heady rush of young emotions, although the carefree melody disguises the lyrics’ fixation on sexual jealousy.

Key lyric: “There’s a girl that I once knew, who often had a friend or two”

When Lee’s sophomore feature, School Daze, pauses for a six-minute jazz extravaganza, Madame Re-Re’s Beauty Salon is suddenly the place to be. With two black sororities squabbling over hairstyle politics – one side compares ‘nappy hair’ to ‘cockleburs’; the other likens straightened locks to hiding one’s blackness – it can only be settled one way: an intricately choreographed dance-off. Straight out of a 1930s musical, the bouncy, toe-tapping contest allows for snappy insults and acrobatics aplenty. By the final, giggling pose, there’s mutual respect between the factions or just an acceptance that love always trumps hair.

In an unbeatable opening credits sequence, Tina (Rosie Perez) furiously busts some red-hot moves on a Brooklyn stoop to the funky sounds of Public Enemy’s ‘Fight the Power’. Decked out in alternating get-ups, she twists and turns like a boxer in the ring, channelling her rage into each swing of the arm. Though Lee’s inspiration was Ann-Margret’s harmless opening number in Bye Bye Birdie (1963), the Do the Right Thing version aggressively reflects the neighbourhood’s simmering tensions. Likewise, the hip-hop anthem’s politically charged lyrics (including Chuck D’s plea to “fight the powers that be”) foreshadow a ticking time bomb. A flawless introduction – and that’s the double truth, Ruth.

Key lyric: “Elvis was a hero to most, but he never meant shit to me. Yes, he’s straight-out racist”

In Denzel Washington’s first of four Spike Lee joints, he embodies Bleek, a gifted jazz trumpeter with a weakness for women. Early on, though, Mo’ Better Blues is a sports film. With saxophonist Shadow (Wesley Snipes) grandstanding on stage, Giant (Lee himself) advises Bleek: “You’re never gonna see no pass from this guy… This guy’s a selfish ball player. Man, you need to get rid of him. It’s your team, your band, and you’re the coach. Fire his ass!” Fired up, Bleek muscles into the spotlight and cuts into Shadow’s solo. A battle of the band members, sure, but on a meta level it’s two supreme actors competing for the camera lens.

“Mr President, I don’t think you realise what’s going on here.” It’s not a lyric, but a spoken word intro to the camera, with Lee’s music video contrasting poverty-stricken individuals – many are black families – with wealthy white gamblers. Though the promo was deemed too political for MTV, Prince returned the favour by writing the soundtrack for Girl 6 (1996) five years later. Beware: for a chilling second, Donald Trump visibly saunters into his own casino.

Key lyric: “So what if we’re controlling all the oil – is it worth a child dying for?”

Around the release of Malcolm X, Lee praised hip-hop – particularly Public Enemy and KRS-One – for introducing the activist to a new generation. Though Lee’s biopic performed a similar educational function, its integral song is Sam Cooke’s bittersweet ballad, which fades in on the day of Malcolm’s assassination. Denzel Washington nabbed an Oscar nomination for the role, and close-ups of his silent face chime with the ominous lyrics. Somehow aware his time is up, the great orator is momentarily speechless.

Key lyric: “Then I go to my brother and I say, ‘Brother, help me please,’ but he winds up knocking me back down on my knees”

Six years on from ‘Fight the Power’, Public Enemy were slipping from public consciousness. Notably, the opening scene of Clockers depicts a drug dealer chastised for a controversial opinion: “Chuck D is the bomb!” With the Crooklyn Dodgers soundtracking the ensuing debate, the role of hip-hop to ‘Strike’ (Mekhi Phifer) and his fellow black youths is scrutinised. Are ‘positive rappers’ like Public Enemy obsolete with the emergence of Tupac and Wu-Tang? Either way, white policemen lurk around the corner, waiting to arrest and publicly humiliate their helpless victims.

Key lyric: “Now clock, kids, who got the cocaine? Don’t tell me it’s the little kids on Soul Train”

In He Got Game, basketball enthusiast Jake Shuttlesworth (Denzel Washington) escapes prison for a week, knowing any mischief could interfere with his parole. So within seconds of meeting his son’s girlfriend’s brother, Jake punches the relative stranger in broad daylight. To outsiders it’s a pathetic gesture, but to Jake it’s a badass move he learned behind bars. He thus plays it cool and walks – no, struts – down the street, lollipop in mouth, to rapper KRS-One’s guest verse on ‘Unstoppable’. As for Lee’s music cue, it’s a slam dunk.

Key lyric: “If you’re immature, then you’re living sinister – you reject the words of a minister”

1977 didn’t only belong to ABBA. With a serial killer loose in New York, Lee’s period thriller, Summer of Sam, depicts the coexistence of everyday paranoia and incessant disco music. Married couple Vinny (John Leguizamo) and Dionna (Mira Sorvino) blast ‘Dancing Queen’ on the car stereo but are preoccupied with viciously berating each other over orgy etiquette. Just as ABBA’s lyrics don’t match the upbeat melody, neither does the scene’s fractured outcome. It brings to mind Muriel’s Wedding (1994) when Muriel declares: “My life’s as good as an ABBA song. It’s as good as ‘Dancing Queen’.” Can a life be as bad as an ABBA song?

Key lyric: “You come in to look for a king”

With Inside Man, Lee was taking over from Ron Howard and directing someone else’s script. Yet, despite the Hollywood budget, Lee still inserts his trademark humour into proceedings. Believing his hostages have surrendered their phones, bank robber Dalton (Clive Owen) is alarmed when a mild white clerk’s ringtone sounds off with Kanye’s on-the-nose hit single – of course, it’s the uncensored chorus. You can’t imagine Howard pulling off a gag like that.

Key lyric: “I ain’t sayin she a gold digger”