On the centenary of his birth, we celebrate a beloved face in postwar British cinema, famous for Ealing comedies and that quintessentially English film Genevieve. 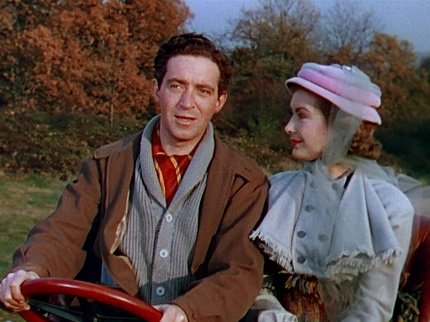 A quick look at the filmography of John Gregson – born 100 years ago – reveals credits in some of the biggest films produced in postwar Britain: Scott of the Antarctic (1948), Whisky Galore! (1949), Treasure Island (1950) and The Lavender Hill Mob (1951). He might only have taken minor roles, but Gregson proved himself to be a versatile performer who looks dashing in uniform, while also having a softer romcom side and a Scouse-Irish blokeishness that meant he never looked out of place. Yet, when the era of angry young men arrived, like his peers Kenneth More and Richard Todd he seemed better suited to television than cinema and became a living-room favourite in Gideon’s Way (1964-67). Refusing to acknowledge his stardom, Gregson insisted: “I just see myself as a handy type to have around.” 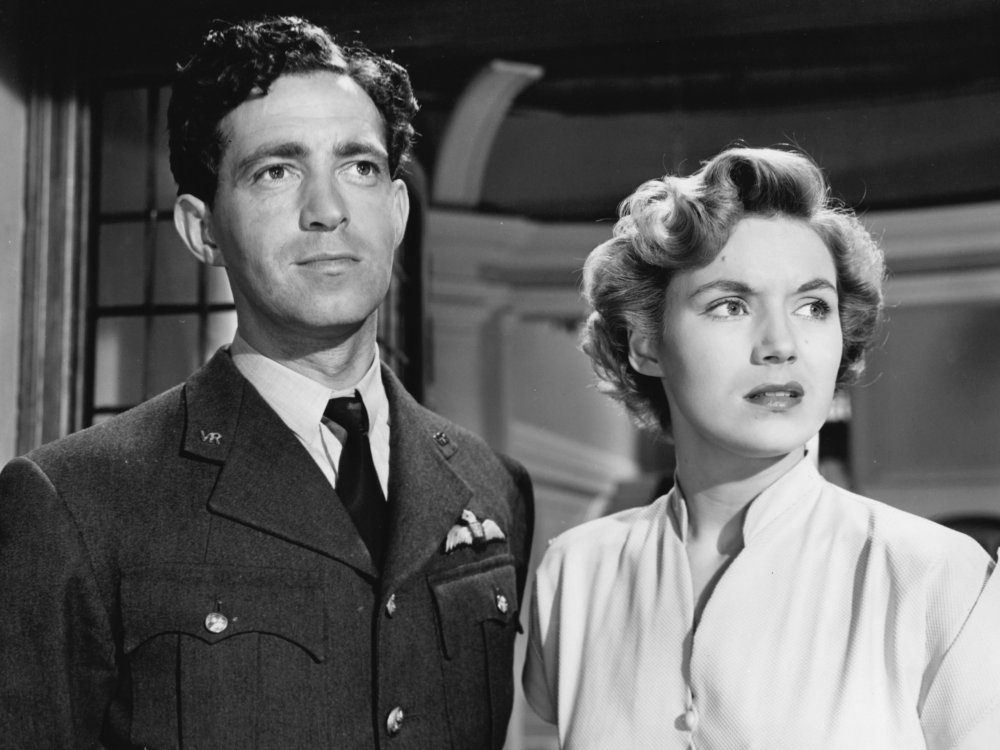 So often cast as a Steady Eddie, John Gregson revels in the opportunity to play the reckless hero in George More O’Ferrall’s tribute to the Few. Having crashed his Hurricane on joining Pimpernel Squadron, medical student ‘Septic’ Baird has a tough time fitting in with the chaps and convincing skipper ‘Tiger’ Small (Jack Hawkins) that he has the right stuff to be a team player. Bristling with patriotic machismo, Gregson gets chewed out again when he abandons control room duty to scramble a plane during a Luftwaffe raid. Yet, such is his essential decency that his insubordination smacks more of Baderesque brio than bombastic egotism. 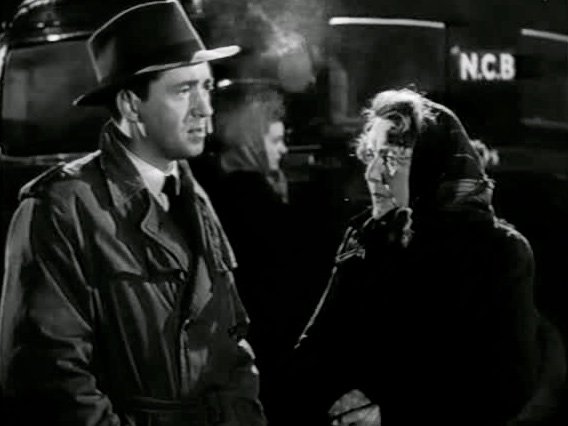 Gregson took his first lead in this government-subsidised mining saga based on the 1950 disaster at Knockshinnoch Castle Colliery. Pitched somewhere between G.W. Pabst’s Kameradschaft (1931) and Carol Reed’s The Stars Look Down (1940), the attempt to rescue 129 Scottish miners trapped underground after a mudslide is very much rooted in the docu-dramatic tradition pioneered by producer John Grierson. As the former miner who redeems himself after having become a Coal Board inspector, Gregson (who wears a tie to set him apart from his erstwhile comrades) blends effortlessly with the nonprofessional players and members of the Glasgow Citizens’ Theatre, as he leads by example with bonhomous composure. 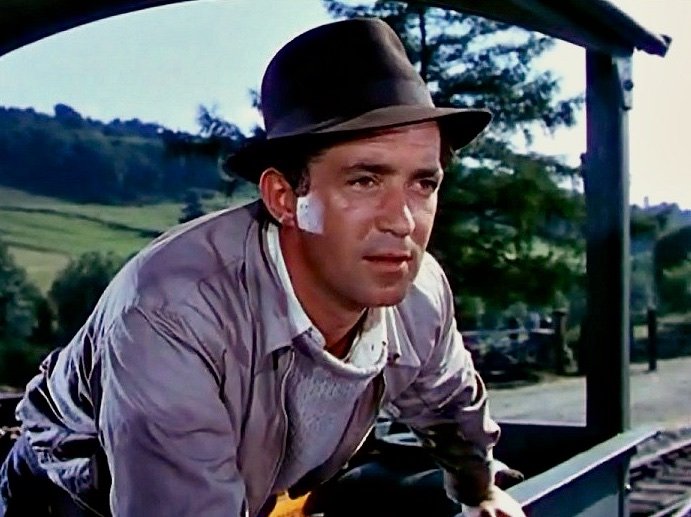 Holding his own against several Ealing stalwarts and a 114-year-old locomotive named Lion, Gregson spurned his working-class roots to play the local squire, who forms an Olde English alliance with vicar George Relph to defy the efforts of British Railways to close down the branch line from Titfield to Mallingford. Inspired by a book about the volunteer restoration of the Talyllyn Railway in north Wales, the third collaboration between director Charles Crichton and screenwriter T.E.B. Clarke has been dismissed by many as hidebound and twee. But Gregson’s lack of patrician stuffiness and willingness to roll up his sleeves has allowed Ealing’s first comedy Technicolor outing to retain its charm. 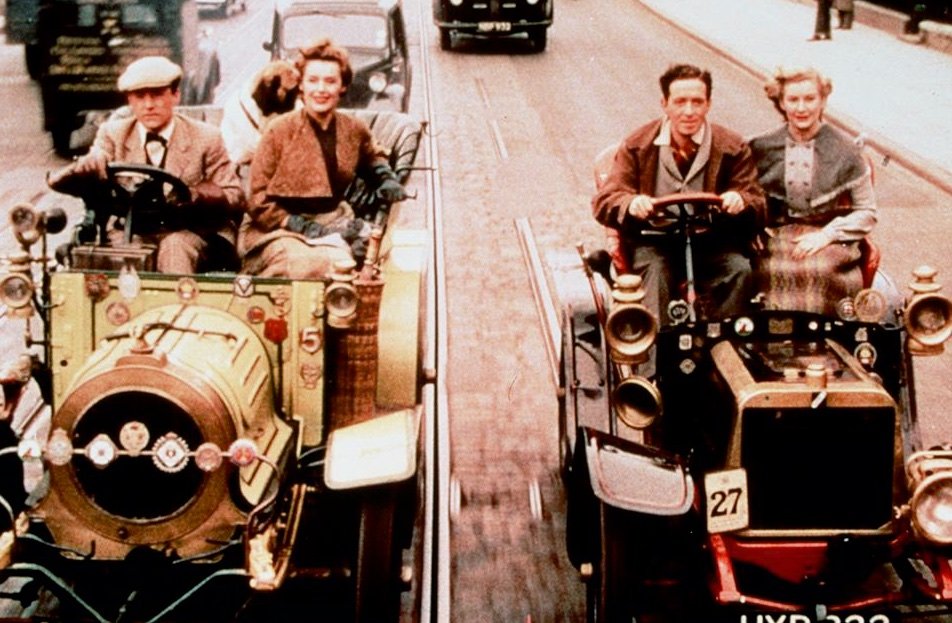 Written by an American and directed by a South African, the quintessentially English film for which Gregson will forever be remembered teamed him with Dinah Sheridan in competition with Kenneth More and Kay Kendall in an unofficial race during the annual London to Brighton Veteran Car Run. Excellent though the leads are, they are upstaged by the 1904 Darracq, driven by Gregson, and More’s 1905 Spyker, which tool along in Technicolor majesty to the strains of Larry Adler’s infectious, Oscar-nominated harmonica score. As Gregson didn’t have a licence, the driving scenes proved somewhat challenging. But his badinage with Sheridan and sparring with More remain comedy gold. 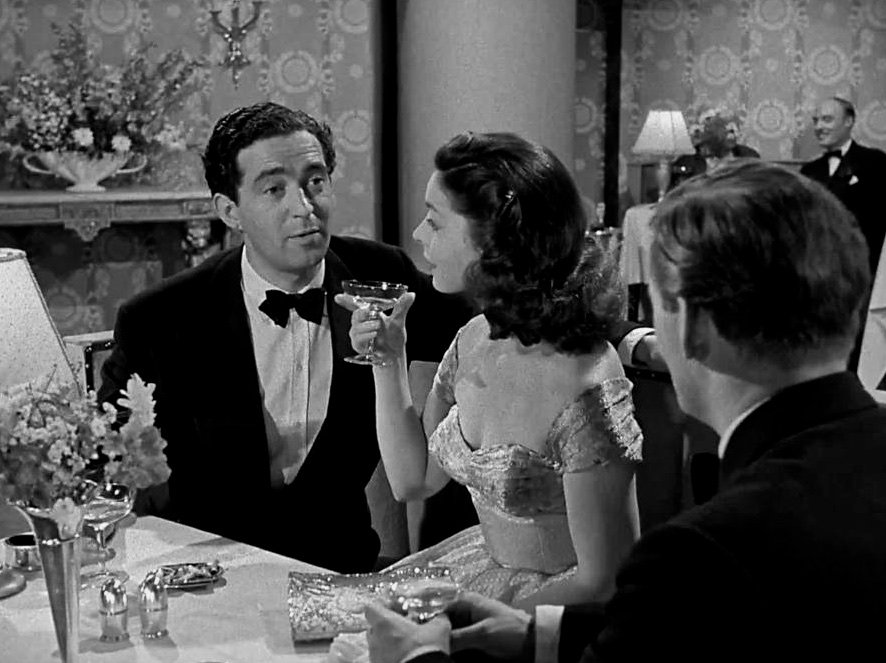 It’s no disgrace to be overshadowed by Orson Welles, and his swaggering display as the conscience-stricken politician in the ‘Lord Mountdrago’ section is usually considered the highlight of this insidious portmanteau. But there’s much to recommend the delightfully creepy opener, ‘In the Picture’, and ‘You Killed Elizabeth’, in which Gregson is afforded the opportunity to play a bounder who comes between boyhood chum and advertising agency partner Emrys Jones and his new paramour, Elizabeth Sellars. With barman Alan Badel (who figures in all three vignettes) plying him with the hooch that sparks his blackouts, Gregson manages to be both boorish and vulnerable in a dark drama that’s deftly directed by David Eady. 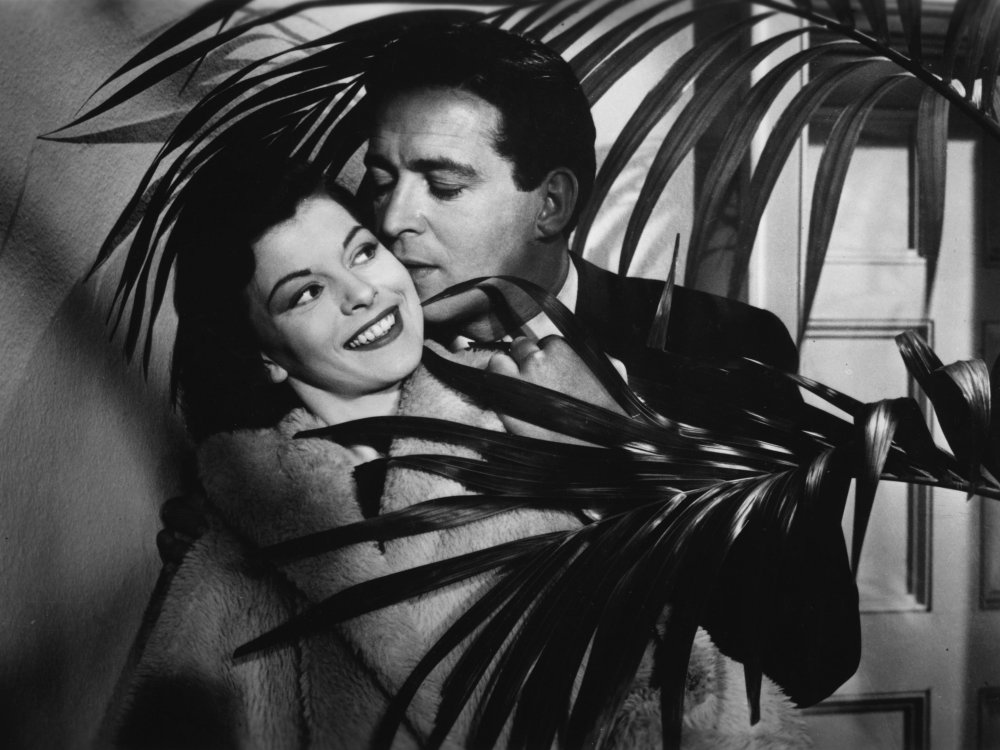 Gregson was such an unassuming actor that he enlivened ensemble items without drawing focus. Yet, as he demonstrated in The Holly and the Ivy (1952) and The Weak and the Wicked (1954), he could be a cad as well as a charmer, and his tendency to plain speaking is also to the fore in this ambitious attempt by B-movie outfit Adelphi to break into the mainstream. Trading on the success of Genevieve, Talbot Rothwell’s pre-Carry On script casts Gregson as a department store employee whose romance with colleague Joan Rice hits the buffers when he pays more attention to his vintage motor, ‘Bessie’, than he does to her. 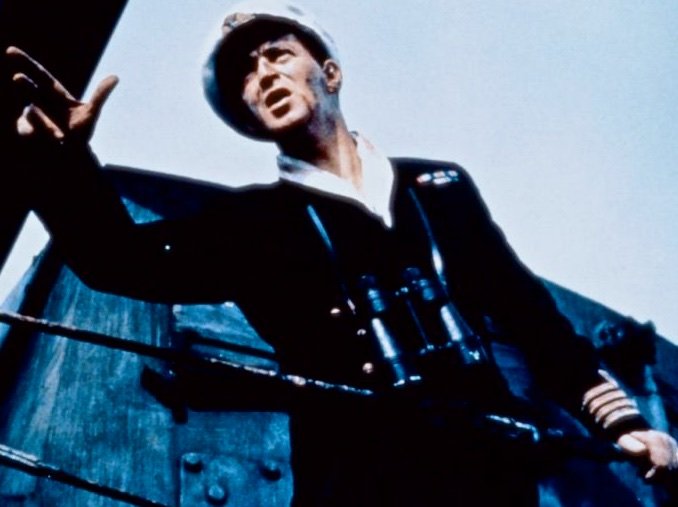 Following his box-office success in sinking the Tirpitz alongside John Mills in the submarine saga Above Us the Waves (1955), Gregson returned to the Atlantic for Michael Powell and Emeric Pressburger’s proficient account of the pursuit of the German pocket battleship Admiral Graf Spee. As a Liverpudlian, Gregson had the sea in his blood and had been fortunate to survive relatively unscathed after his minesweeper, HMT Dalmatia, was torpedoed. Here, he assumes the skipper’s stripes to the manor born, as Frederick Secker Bell, the captain of HMS Exeter, the cruiser that was damaged after helping lure Captain Hans Langsdorff (Peter Finch) into a trap off the coast of Uruguay. 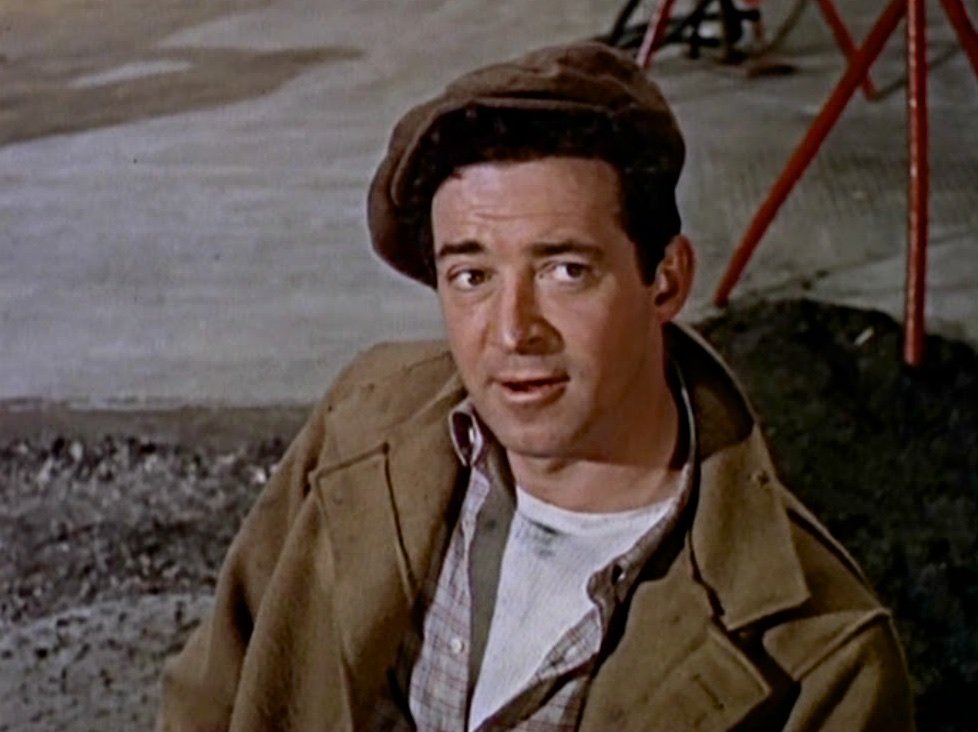 Gregson was a practicing Catholic and even played a priest in Philip Leacock’s touching plea for tolerance, Hand In Hand (1961). But the miracle about this picture is that it was ever made, as 22 years passed between Emeric Pressburger first writing the script as a newly arrived Hungarian émigré and Julian Aymes accepting the rather poisoned chalice of becoming Pressburger’s new creative partner after his association with Michael Powell. Gregson oozes rascally charm as the Irish labourer who wins the heart of Italian waitress Belinda Lee. Yet, despite the cosy sense of communality generated by Carmen Dillon’s poetic realist sets, this is more a charming curio than a classic. 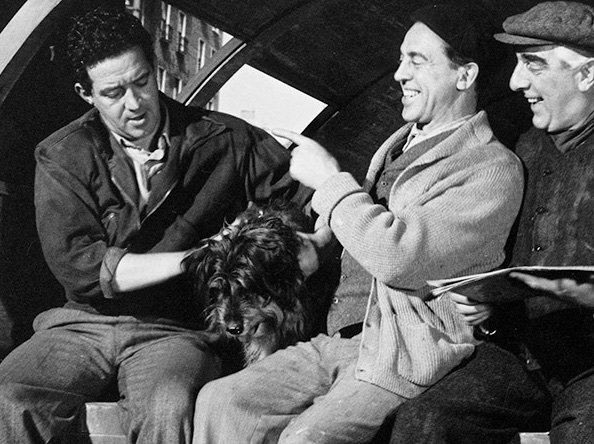 Having played an alcoholic Irish father in Jacqueline (1956), Gregson dusted down his Dublin accent for this Catherine Cookson adaptation, which he made towards the end of his career-defining stint with Rank. As binman James Ignatius Rooney, Gregson gets to roister with his pals between dodging the advances of widowed Rathmines landlady Marie Kean and her spouse-seeking female dependents and shooting the craic with Kean’s puckish father, Barry Fitzgerald. However, Gregson also gets to play in the All-Ireland hurling final, and he was coached by Gaelic icon Dessie Ferguson prior to shooting his scenes while mingling with the players at the 1957 showdown between Kilkenny and Waterford. 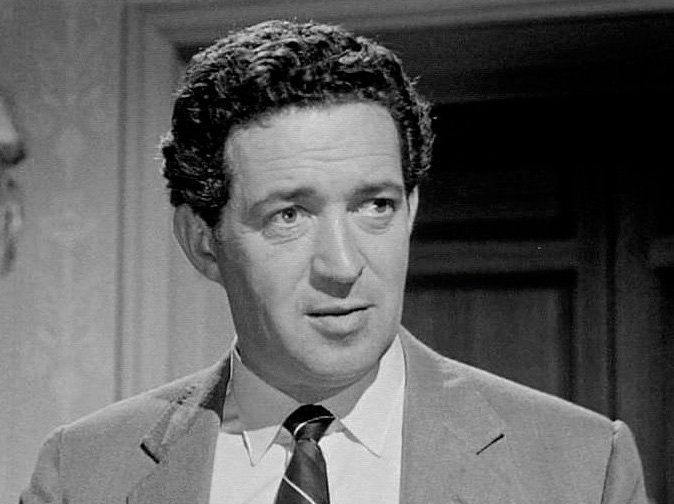 With leads drying up after The Captain’s Table (1959) and Faces in the Dark (1960), Gregson began cracking crime in such contrasting noirs as The Frightened City (1961) and this simmering abduction thriller, which almost served as auditions for Gideon’s Way. Faced with a cunning adversary (Robert Shaw), a meddlesome victim (Alec Clunes) and a pompous boss (Alan Wheatley), DI Gregson has his hands tied in trying to find a young boy holed up in a remote house with a booby-trapped golliwog. The presence of the latter may seem problematic, but it reinforces the picture’s deceptively sharp critique of an entrenched society about to be rocked by change.