One of film noir’s most iconic actors, Gloria Grahame exuded glamour and femininity, while excelling as troubled, vulnerable women. Here are 10 of her best movies. 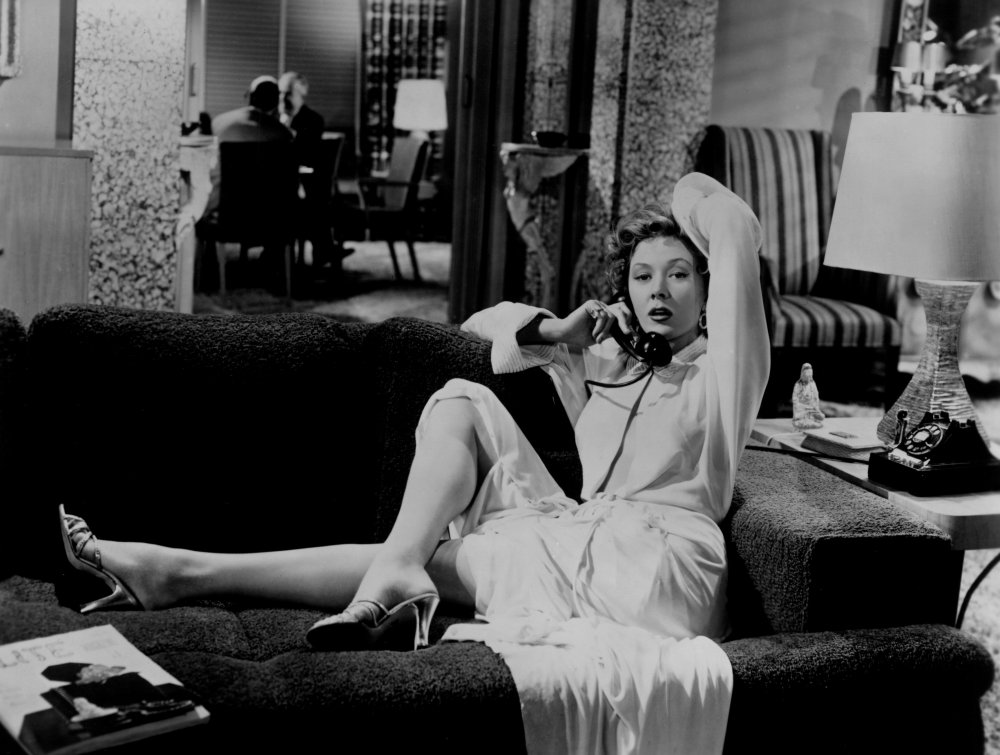 Good at Being Bad: The Films of Gloria Grahame runs at BFI Southbank from Oct-Dec 2017

The coffee thrown at Gloria Grahame by Lee Marvin in The Big Heat (1953) symbolised a change of mood in Hollywood. When James Cagney shoved a grapefruit in Mae Clarke’s face in The Public Enemy (1931), it was humiliating but harmless. But the scalding liquid disfigures Grahame and reflects the tough, cynical realism that had crept into postwar American cinema through film noir.

With her lisping voice and sleepy eyes, Grahame was in a number of the finest examples of this dark cycle. She gave femme fatality a raw but touchingly vulnerable sensuality, ensuring she was always much more than just good at being bad. But although she won the Oscar for best supporting actress for her part in Vincente Minnelli’s Hollywood melodrama The Bad and the Beautiful (1952), Grahame never became a front-rank star. Off-screen scandals and a turbulent private life damaged her reputation, and her later career is spotted with such debacles as Mansion of the Doomed (1976).

At her best, however, as in the 10 films below, Grahame lit up the screen with her beguiling, intense presence. 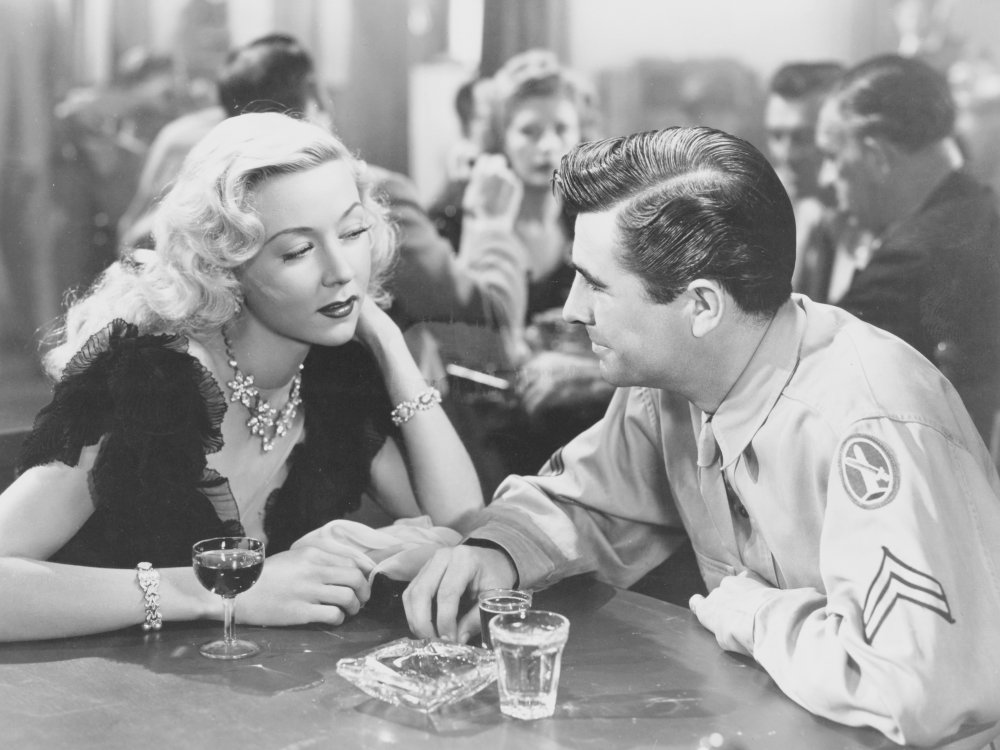 Loaned by MGM to RKO for only her fifth feature, Gloria Grahame spent two days on the set of Edward Dmytryk’s adaptation of Richard Brooks’s novel, The Brick Foxhole. But her collaboration with dialogue director Bill Watts transformed her approach to acting, as she realised it wasn’t how she looked at a man that mattered but the thought behind her eyes. The way her brassy taxi dancer melts while swaying silently with distressed soldier Mitch (George Cooper) shows how keenly she learned the lesson. However, her best supporting actress Oscar nomination owed more to the spiky bedsit exchange with Mitch’s anxious wife (Jacqueline White) and the homicide cop (Robert Young). 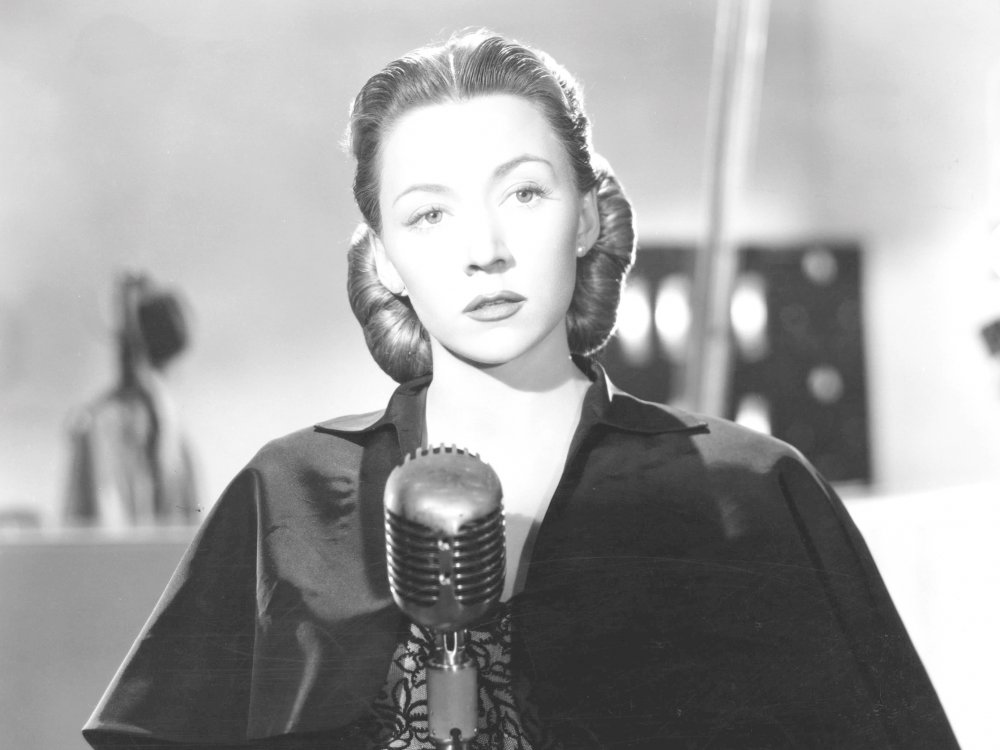 A besotted Nicholas Ray directed Grahame in this sexually ambivalent reworking of Vicki Baum’s novel, Mortgage on Life. Notable for its use of unreliable flashbacks, it also contains faint pre-echoes of All about Eve (1950), which later earned two Oscars for writer-producer Herman J. Mankiewicz’s brother Joseph. Having demonstrated a knack for delusional glamour as the silent screen siren in Robert Alton’s Merton of the Movies (1947), Grahame revels in playing the ungrateful protégée who almost ruins the life of ex-chanteuse Marian Washburn (Maureen O’Hara). The scene in which Grahame faux naively entices composer Luke Jordan (Melvyn Douglas) by drinking some water, lip-synching Kay Lorraine’s rendition of ‘Paradise’ and smiling coquettishly is priceless. 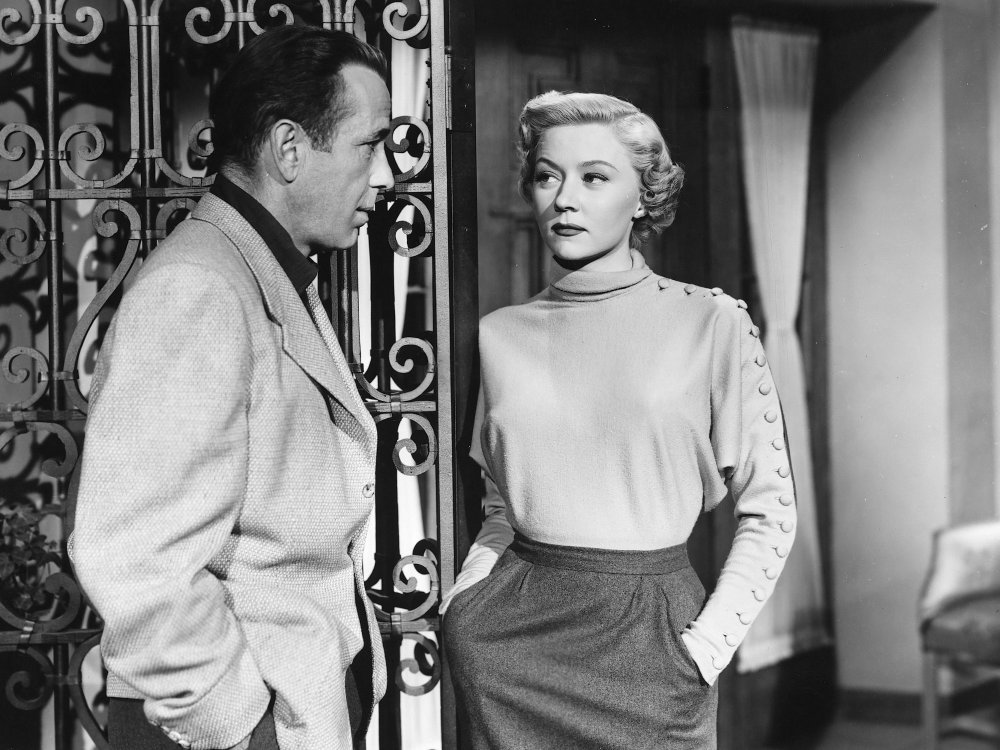 Inheriting a role intended for Lauren Bacall, Grahame found herself participating in husband Nicholas Ray’s guilty rumination on the disintegration of their own marriage. Grahame plays a starlet who gives fading Hollywood screenwriter Dixon Steele (Humphrey Bogart) an alibi in a murder case, and then falls in love with him. But, following Hadda Brooks’ nightclub performance of ‘I Hadn’t Anyone till You’, her character becomes increasingly afraid of the short-fused Steele. After accepting his proposal, there’s wide-eyed panic as she kisses him and then shock when he erupts during their engagement party. During the film’s sombre climax, you feel that the tears are wholly real when she whispers, “I lived a few weeks while you loved me.” 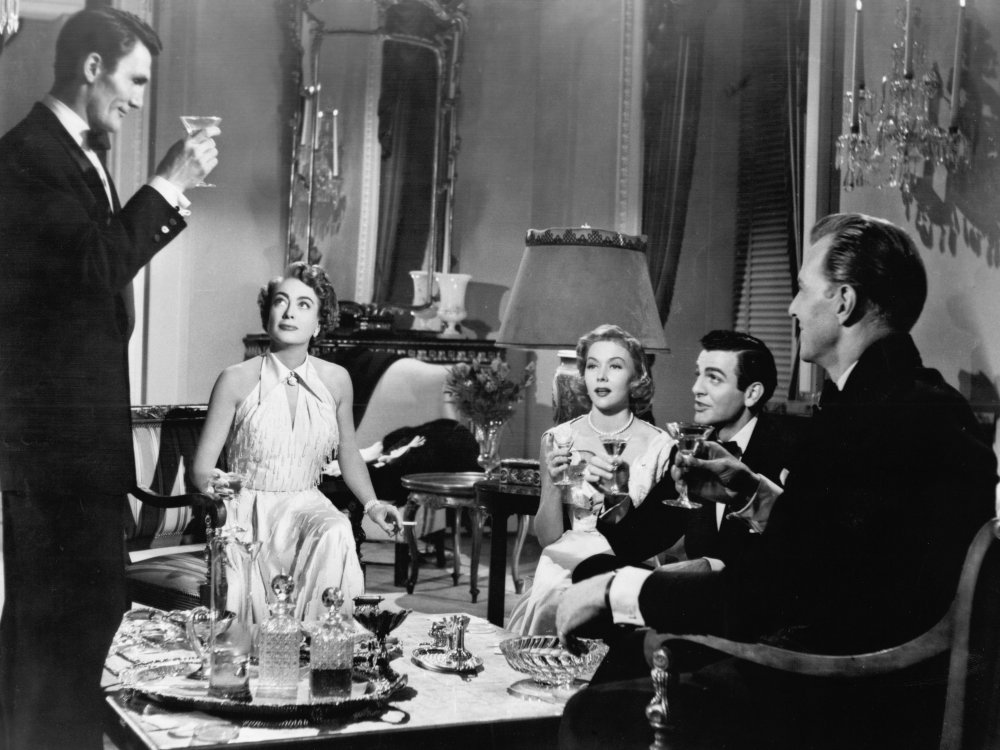 Following jobbing supports in The Greatest Show on Earth and Macao (both 1952), Grahame played second fiddle to Joan Crawford in this simmering take on a noirish Edna Sherry novel. She prepared for the role of the ruthless old flame of playwright Myra Hudson’s (Crawford) gold-digging husband (Jack Palance) by reading Macbeth. She would later excel as Lady Macbeth on stage, but there’s nothing remorseful about her conniving to kill Hudson before she disinherits her husband. First seen in veiled virginal white and then in vampish black, as she shudders to the masochistic thrill of being seduced by a brute, Grahame exudes earthy malevolence, even while plotting murder on a dictaphone disc. 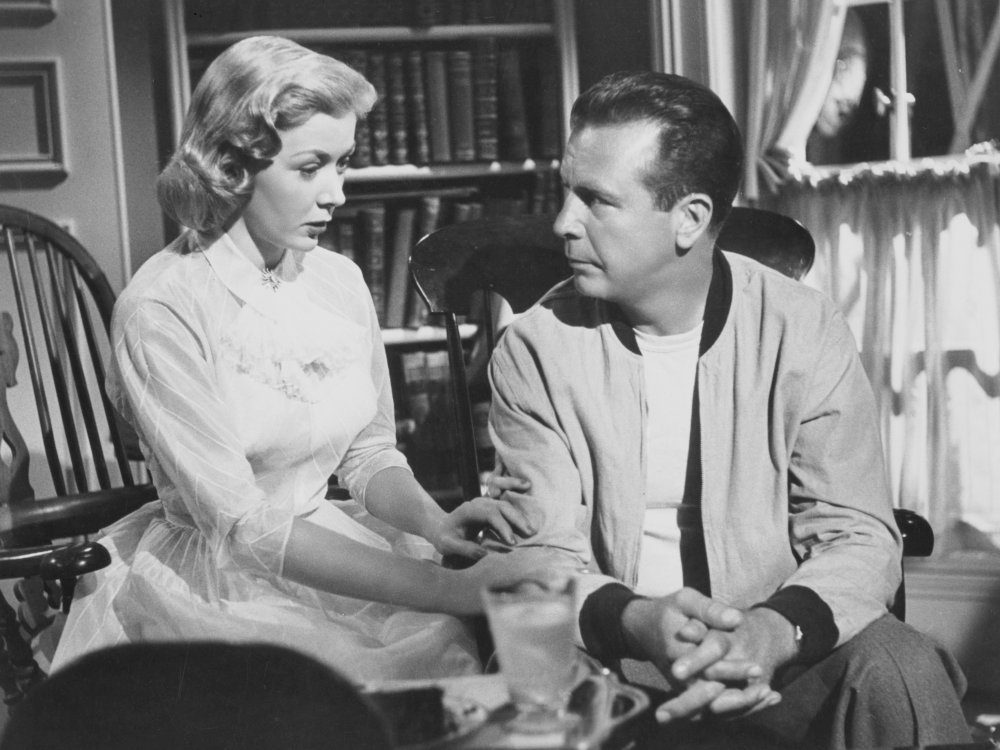 Grahame only needed nine minutes on screen to claim the best supporting actress award in Vincente Minnelli’s darkly chic Hollywood exposé. Possibly based on Zelda Fitzgerald, her character Rosemary Bartlow is the southern belle wife of a college professor (Dick Powell) whose book is optioned by ruthless studio boss Jonathan Shields (Kirk Douglas). Grahame is splendidly ditzy, as she goes from being a dutiful faculty wife (giving talks “liberally peppered with sex”) to flirting with a film star to avoid distracting the husband she adores (“James Lee, you have a very naughty mind – I’m happy to say.”). She would reunite with Minnelli to cameo as another neglected spouse in The Cobweb (1955). 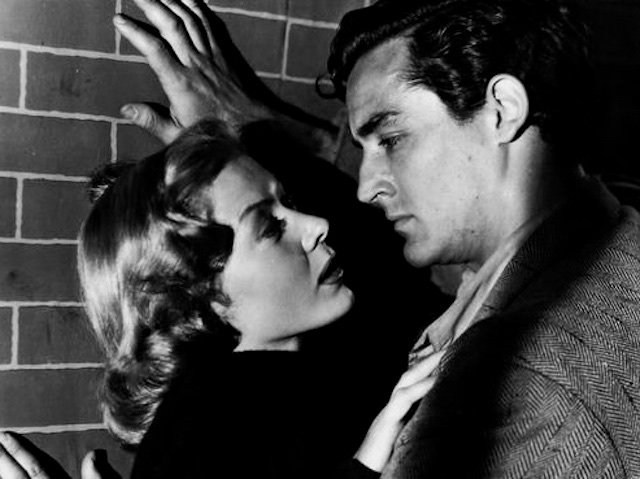 In his Cahiers du Cinéma review of this underrated and suddenly relevant study of US attitudes to immigration, François Truffaut declared that Grahame’s eyes could “make you die of love”. She plays a factory girl fallen on hard times who shelters a Hungarian fugitive, Peter Kuban (Vittorio Gassman), an Auschwitz survivor seeking the American paratrooper who can help him claim citizenship. Such is her character’s honed survival instinct that she knocks out her landlady’s over-amorous son with a chair and steals 20 cents from some young street dancers. Even so, Kuban tells her: “You’re not so hard as you pretend.” 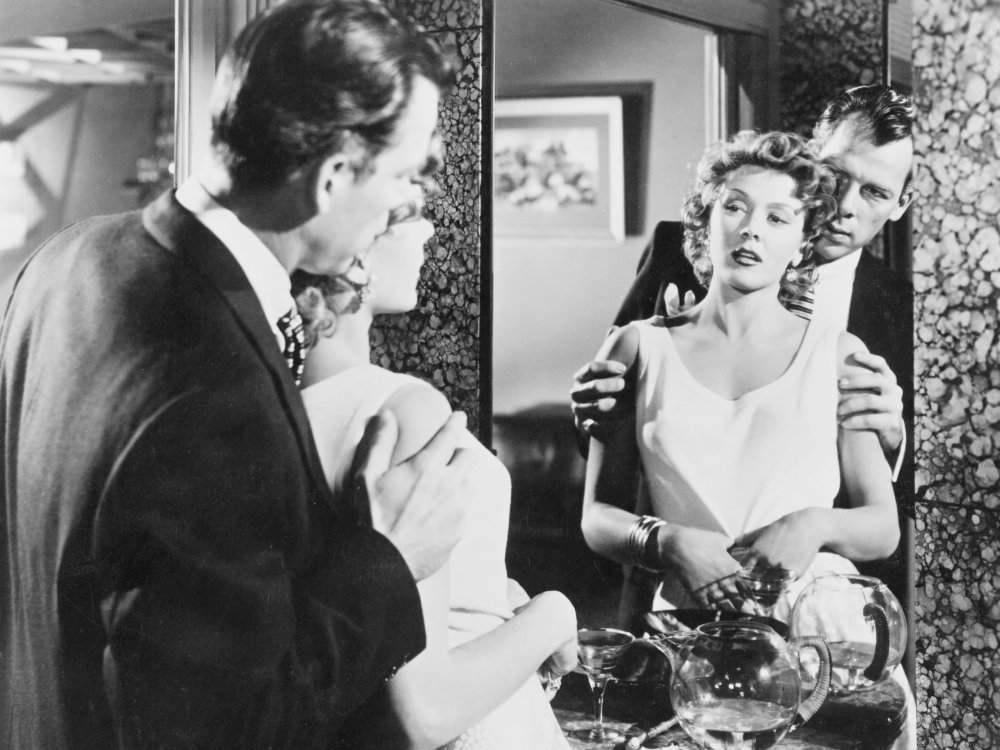 There’s a cruel irony in the fact that an actress who had extensive surgery on her upper lip should be best remembered for having her face scarred by the scalding coffee thrown in this Fritz Lang classic. Grahame had been slapped around in Man on a Tightrope (1953) and would be dumped in a bathtub in The Good Die Young (1954), but she fights back here, not only giving mobster Lee Marvin as good as he gets, but also bumping off the widow of a corrupt cop (“We’re sisters, under the mink”). Yet, lines such as “I’ve been rich and I’ve been poor. Believe me, rich is better” reveal the vulnerability that always made Grahame’s bad girls so human. 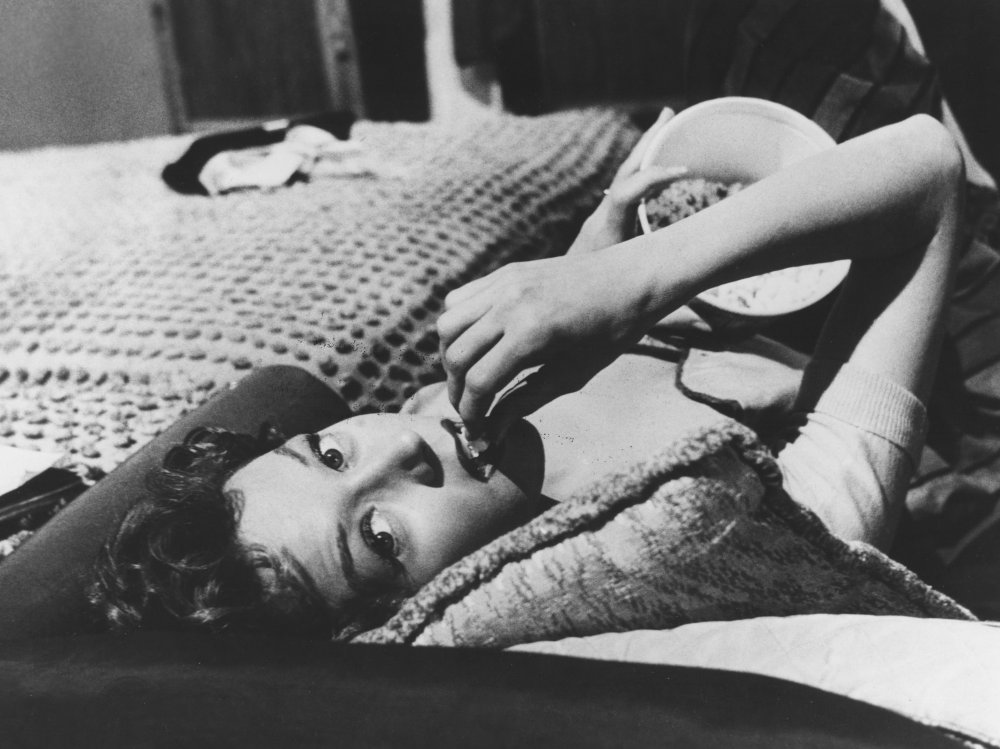 “I’m a girl who loves to be manhandled,” Grahame once revealed. She had an equally blithe attitude to being killed off, nicknaming herself ‘Miss Obituary’. But Grahame rarely played victims. Following her touching death scene in The Big Heat, she reunited with Glenn Ford for Fritz Lang’s bleakly abrasive reading of Émile Zola. Fourth choice behind Rita Hayworth, Olivia de Havilland and Jennifer Jones, Grahame lived up to her character’s tagline billing of being “born to be bad…to be kissed…to make trouble!” But she’s less a femme fatale than a tragic feminist, trapped in the knowledge that “Most women are unhappy, they just pretend they aren’t.” 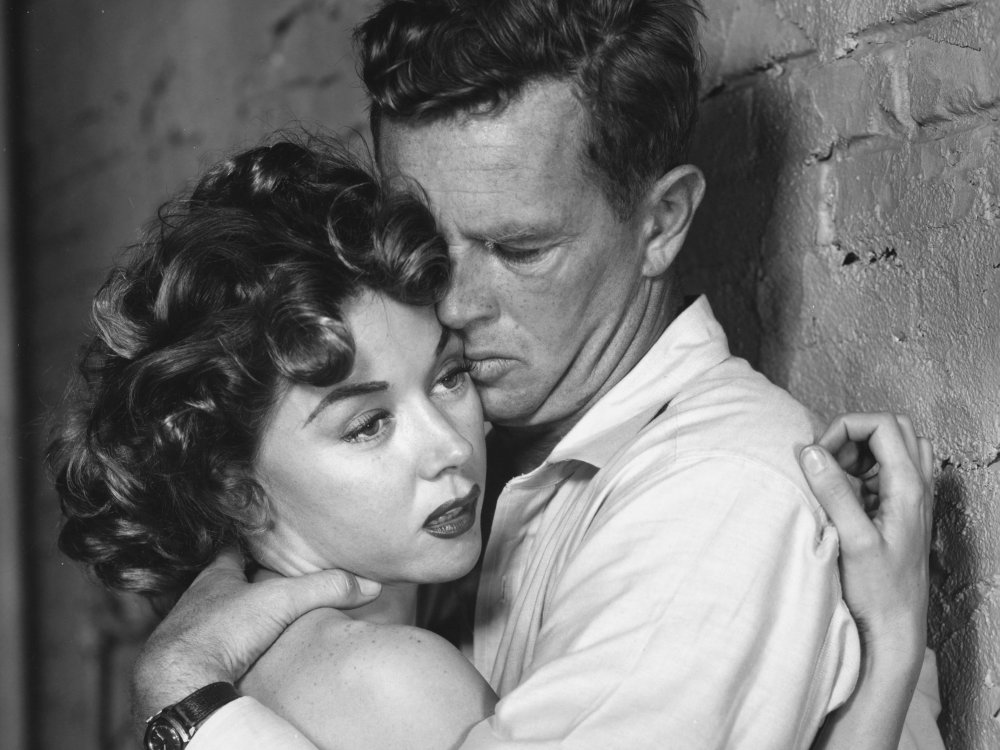 Finding glamour “horribly monotonous”, Grahame sought out projects like this lurid melodrama. “I dote on death scenes,” she said, “or any kind of Spillane-type manhandling… I am interested in roles that sometimes turn a cinema-goer away in horror… After all, what are a few contusions or abrasions if you get the man you love?” Things don’t quite work out that way in Naked Alibi, however. Grahame plays the chanteuse mistress of vicious thug Al Willis (Gene Barry) who realises he’s been two-timing her and instead throws in her lot with the dogged cop (Sterling Hayden) on Willis’s tail. Watch out for the moment when Grahame sizzlingly lip-synchs to Jo Ann Greer performing ‘Ace in the Hole’. 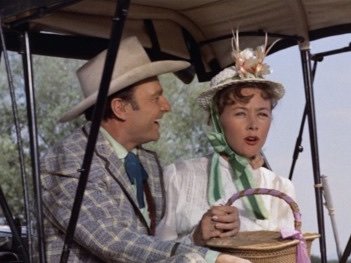 By the time Fred Zinnemann boldly cast her as Ado Annie in this game-changing Rodgers and Hammerstein musical, Grahame had earned a reputation for being difficult to work with. One suspects, however, that her efforts to unsettle her co-stars were rooted in the insecurity of being only an occasional singer. Yet she summons the debut innocence of Blonde Fever (1944) in her beautifully acted rendition of ‘I Cain’t Say No’ and displays her rarely indulged comic timing in duetting with Gene Nelson on the delightfully risqué ‘All ’er Nuthin’. How sad that – besides a couple of scenes in Odds against Tomorrow (1959) – she never got to display these unique talents again.