From girlhood to adulthood: six French films about sexual awakening

With our Teenage Kicks season celebrating movies about the joys and pains of adolescence, let’s talk about sexual awakening on screen… French-style. 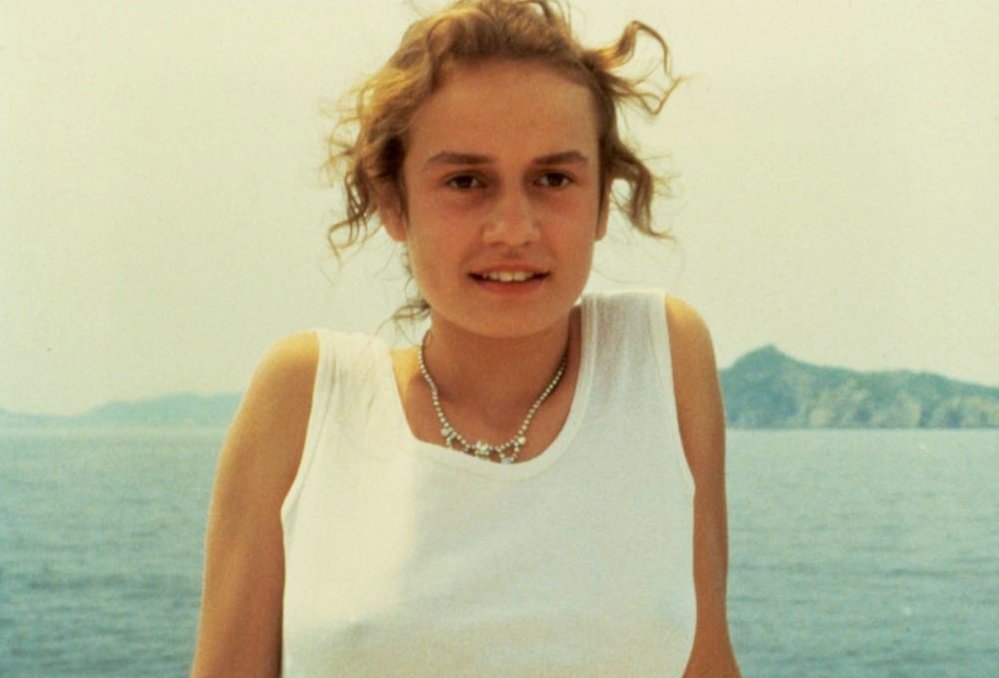 As part of BFI’s Teenage Kicks season, we teamed up with I am Dora to present a special screening of Maurice Pialat’s À nos amours (To Our Loves) on Sunday 10 August. After the screening, we held a salon in the Teenage Kicks teen bedroom installation at BFI Southbank and discussed the idea of the young femme fatale in French cinema as a construct of male directors’ fantasies, and how these depictions affect the female viewer’s sense of self.

Pialat’s film centres on 15-year-old Suzanne (a stunning performance by a very young Sandrine Bonnaire) who – on a mission to escape her overbearing father, histrionic mother and brutish brother – embarks on a rampage of sexual adventure, working her way through partners with apparent cool abandon. As Suzanne’s transformation unfolds, audiences and those closest to her are left wondering what it is that she seeks: affection, freedom, pleasure, or a man just like her father? Maurice Pialat (who himself plays in the film as Suzanne’s father) directs a fresh-faced and inscrutable Bonnaire to give us few easy answers; here is a girl who seems to have the power of youth and beauty, but never quite finds what she’s looking for.

In her essay to mark the Criterion DVD release of the film in 2005, critic Molly Haskell posits À nos amours as settling comfortably into a collection of iconic films exploring “the teenage girl on the cusp of sexual awakening”:

Part child, part femme fatale, innocent and dangerous in equal proportions, these schoolgirl seductresses, born to blossom under the eye of the camera, have exerted a fatal fascination for Pygmalion auteurs who seek to capture and unveil this drama of unfolding. But over the years, as one transfixing newcomer after another, barely out of braces and backpacks, embarks on the vita sexualis, we have to wonder, whose sexuality is it, exactly? Is this the way they see themselves, are these their yearnings, or is this precocious sensuality a projection of the guilty desires and fears of directors old enough to be their fathers?

To mark the occasion we’ve put together a list of six French films that play with and subtly subvert this idea of female ‘sexual awakening’ in cinema, from girlhood to adulthood. 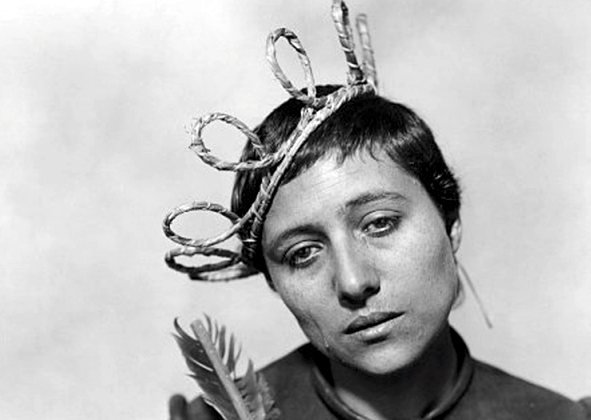 Carl Theodor Dreyer’s silent masterpiece focuses not on the unsteady steps into womanhood, but on the last moments of our 19-year-old heroine’s brief life. Here is a girl who eschews the pressures of gender conformity, refusing to wear women’s clothes and vowing her faith and obedience to no earthly man – only to God – and is punished severely.

While the film’s focus is firmly on Joan’s trial and persecution, critic Pauline Kael saw something else in Dreyer’s austere direction that combined stark close-ups and rapid editing to build the atmosphere of fervent oppression that leads to Joan’s torture and eventual death. For her, there was a subtle double meaning in the ‘passion’ of the title, referring both to its spiritual and subversively erotic dimension: “In [his] enlargement Joan and her persecutors are shockingly fleshly – isolated with their sweat, warts, spittle, and tears, and (as no one used makeup) with startlingly individual contours, features, and skin. No other film has so subtly linked eroticism with religious persecution.” 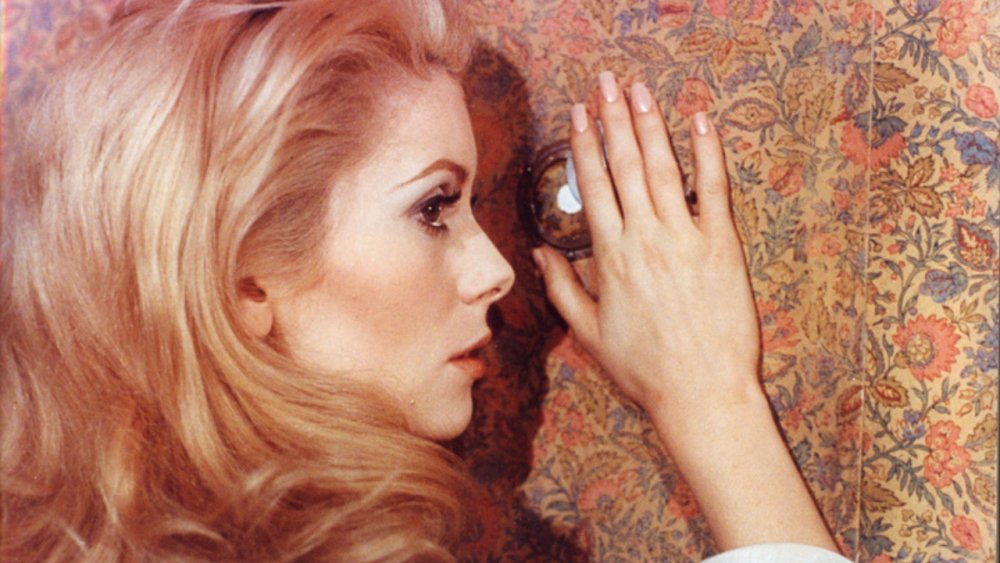 Séverine (Catherine Deneuve) is a 23-year-old woman languishing in the boredom of her bourgeois marriage. Having never been allowed to indulge in any sort of sexual experimentation in her youth, she has instead followed convention and married a handsome doctor who keeps her dripping in Yves Saint Laurent but cannot pique her sexual interest. Being unable to have a healthy sexual relationship within her marriage, she indulges in perverse fantasies of rape and sexual domination, eventually attempting to realise them by becoming a madame at a high-class brothel.

Luis Buñuel’s exploration of Séverine’s sexuality is played out with characteristic surrealist flourish, and her true motivations remain always obscured. Critic Melissa Anderson has observed that, for Deneuve, this ultimate mystery became a calling card and the basis of the rest of her filmic output: “Belle de Jour, more than any other film from the first decade of her career, defined what would become one of the actress’s most notorious personae: the exquisite blank slate lost in her own masochistic fantasies and onto whom all sorts of perversions could be projected.” 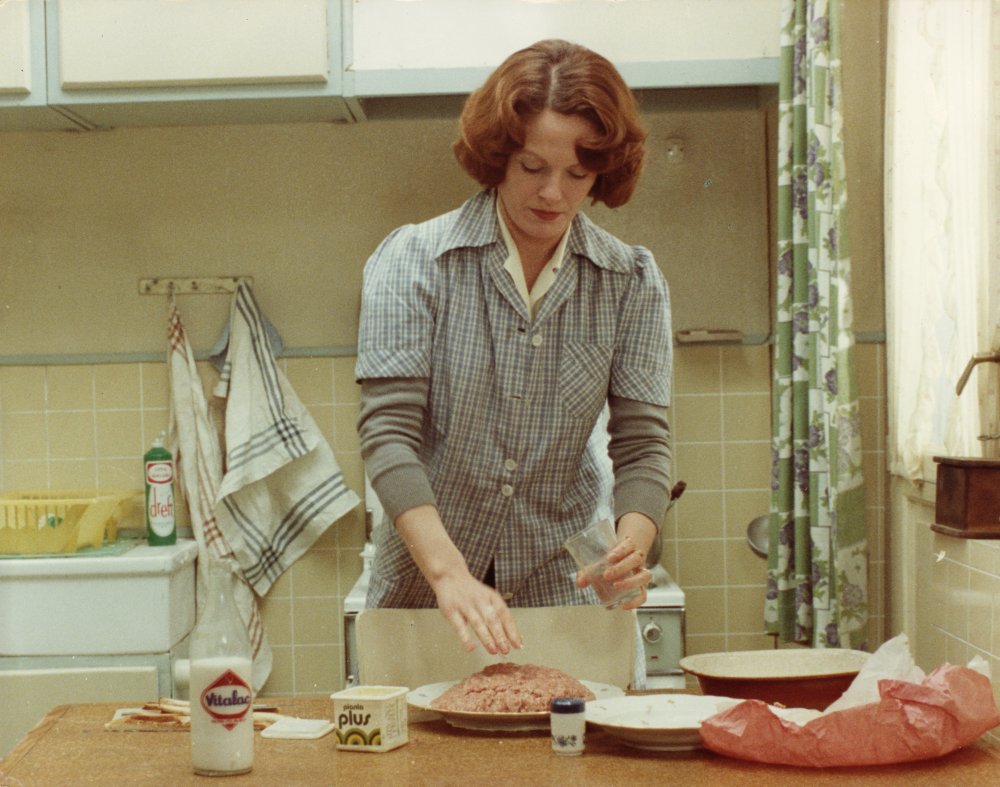 In Chantal Akerman’s magnificent exploration of one woman’s need to contain her emotions in a fortress of control, she gives us a female protagonist who is a single mother, devoted housewife and afternoon prostitute. Steadfastly refusing to reduce Jeanne to an object that is the product of a seedy profession, Akerman lingers not on her afternoon visits with her male clients but instead gives meticulous detail to the time it takes for the dressing, the cooking and the cleaning that make up Jeanne’s day.

Akerman’s direction is almost reverent in its distanced respect for her heroine; she chose not to use close-ups or point-of-view shots, stating that she refused to cut “this woman in pieces”. Over three days (three hours and 21 minutes for the viewer), things start to unravel: a button is lost, the potatoes are over cooked and the coffee doesn’t taste right. As each small disaster disturbs the delicate equilibrium of 23, quai du Commerce, the film’s structure changes and the viewer is led for the first time into an encounter with a paying client during which Jeanne unexpectedly experiences an orgasm. In Jeanne’s world though, this sexual ‘awakening’ is not proof of a long dormant longing, but an unwelcome intrusion that induces a coolly murderous impulse. 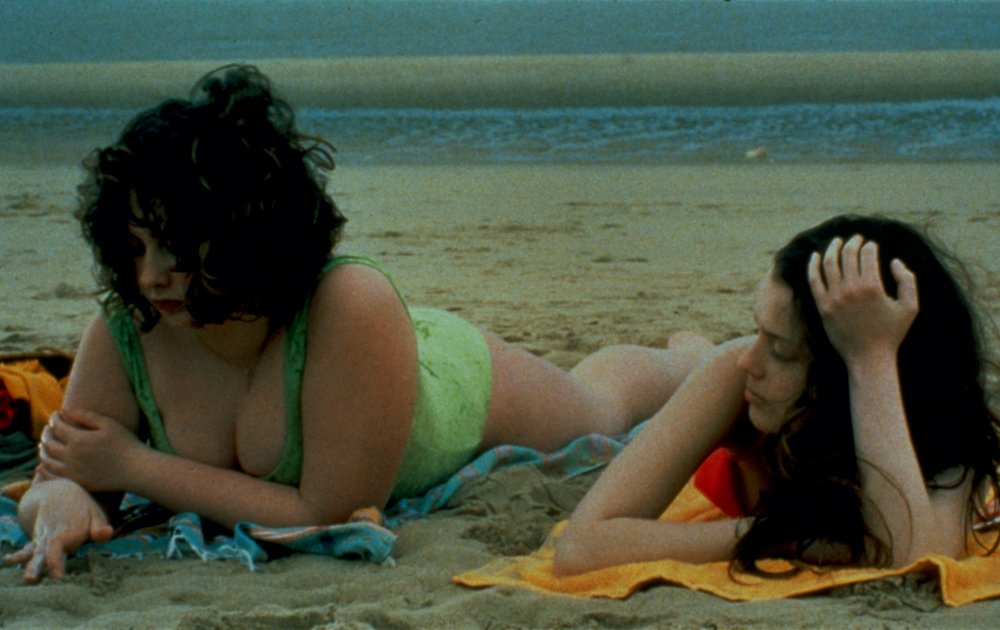 In what could be a scene out of any teen movie, Catherine Breillat’s À ma sœur! begins with two girls walking arm-in-arm talking about losing their virginity, but it soon becomes apparent that this is no American Pie. The girls could not be more different. Elena is the very epitome of youth and French beauty; her young, slim body is a site of reverence and she longs for the chase of romantic love. Anais’s body is a fortress, overweight and unkempt, and she has no such fantasies about this rite of passage. “My first time should be with nobody,” she says, “Guys are sick”.

Directing her film more like a horror than a coming-of-age drama, Breillat concerns herself with the violent and often humiliating reality of a girl’s loss of virginity. Employing real-time direction (the first scene in which Elena’s holiday love interest convinces her to have sex is 25 minutes long), she dethrones the idea that sexual awakening as a teenager is any sort of liberation. As the fallout from Elena’s loss of virginity plays out within their family, the film’s ferocious climax reveals Breillat’s preoccupation with the idea that any the ‘shame’ associated with a young woman’s sexual activity is not inherent in the act itself, but a result of the constructed lie of romantic love. 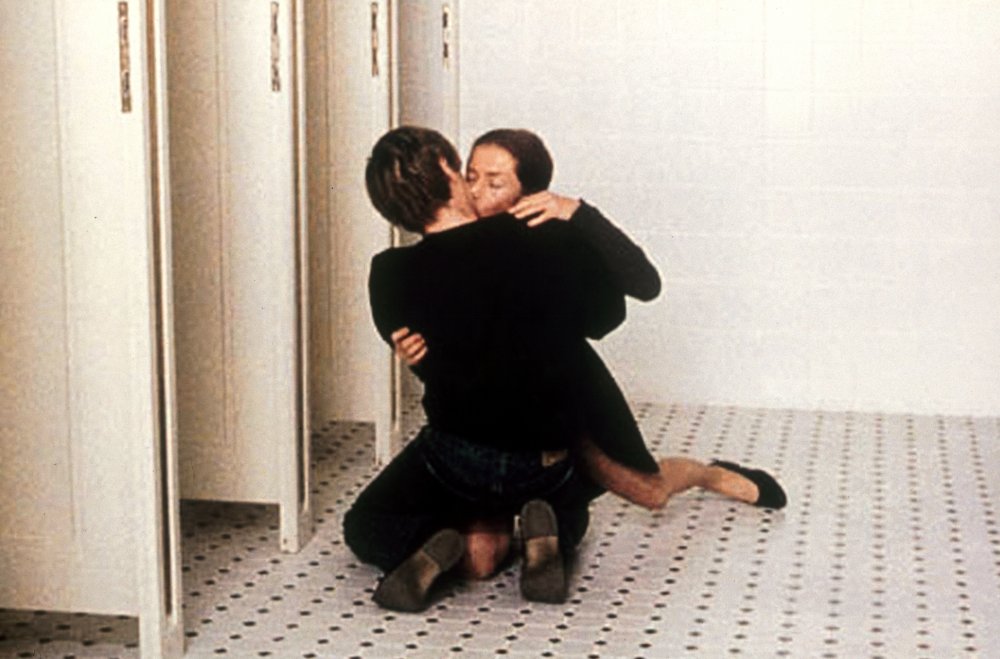 Michael Haneke’s Erika, the protagonist of The Piano Teacher, is hardly a girl on the cusp of womanhood. Instead she is a woman who has masochistically resisted the painful transition from girlhood. In her 40s, Erika (Isabelle Huppert) lives at home with her domineering mother, a relationship marked with dysfunctional co-dependence and embattled suffocation. From the outside she is a picture of bourgeois respectability, a well-paid and well-respected classical music teacher, whose every movement demonstrates precision and discipline. In private, Erika indulges in seedy voyeurism, visiting pornographic bookshops, spying on people having sex at drive-ins and then indulging in masochistic self-harm.

But this is not a tale of a kinky schoolteacher. Setting his film in Vienna, the birthplace of Freud, Haneke is as much interested in our fascination with Erika’s sexual deviations as he is in the deviations themselves. As Erika’s pursuit of control through sexual domination gains momentum, Haneke’s orchestration of his grim denouement leaves no one left unscathed. 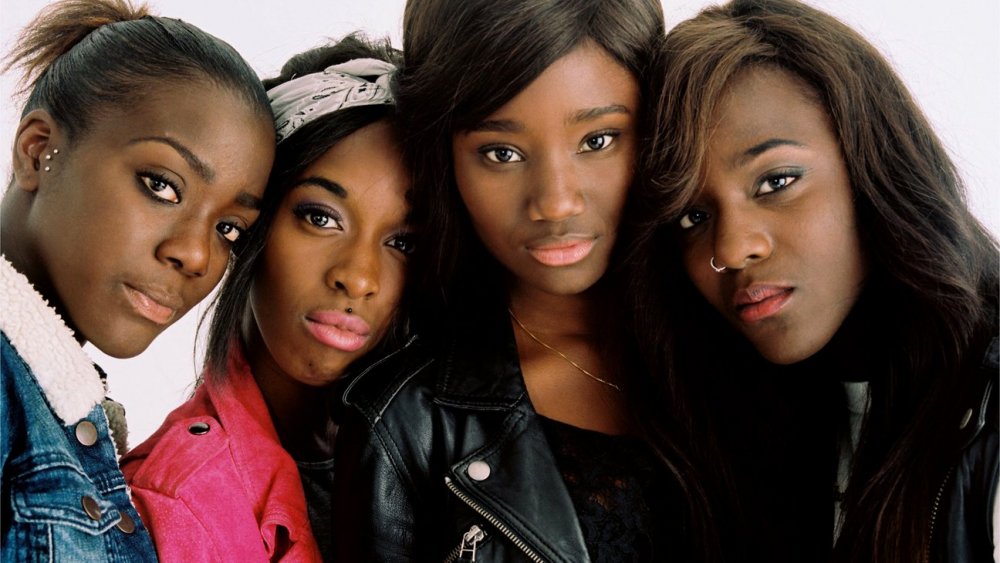 Céline Sciamma’s first two films (Water Lilies, 2007; Tomboy, 2011) explored the myriad effects that societal conventions have on delicately forming female identities. In her third film, which opened the Director’s Fortnight at Cannes this year, 16-year-old Marieme (Karidja Touré) must navigate not only the disruptive onset of womanhood, but also the inequalities, prejudices and disadvantages of being black and living in the underprivileged ‘banlieues’ of north-western Paris. Marieme lives in a man’s world, with an abusive brother governing her unhappy home life. Her developing sexual autonomy is compromised by this patriarchal hold, as her love interest, Ishmael, initially rebuffs her advances for fear of reprisal from her brother. Taking refuge in a girl gang transforms Marieme, and her new group identity helps her to express a kind of bad girl sexuality that empowers her to consummate and then dominate her eventual relationship with Ishamel.

Dividing her film into four clearly marked sections in which Marieme changes her physical appearance to suit the different worlds (school, street, home) she must navigate, Sciamma shows the viewer how Marieme’s developing sexuality is both empowering and treacherous, potentially obscuring her emergence as an individual. A rare exploration of the black female psyche, Sciamma’s work with cinematographer Crystel Fournier is particularly sensitive, stunningly photographing Marieme in a distinctive blue palette, and ensuring she remains vibrant and vital on screen even while it seems she may be disappearing from society.