From It Happened One Night to It’s a Wonderful Life, 10 prime cuts from one of the most celebrated – yet most contentious – directors of Hollywood’s golden age: the multi-Oscar-winning Frank Capra. 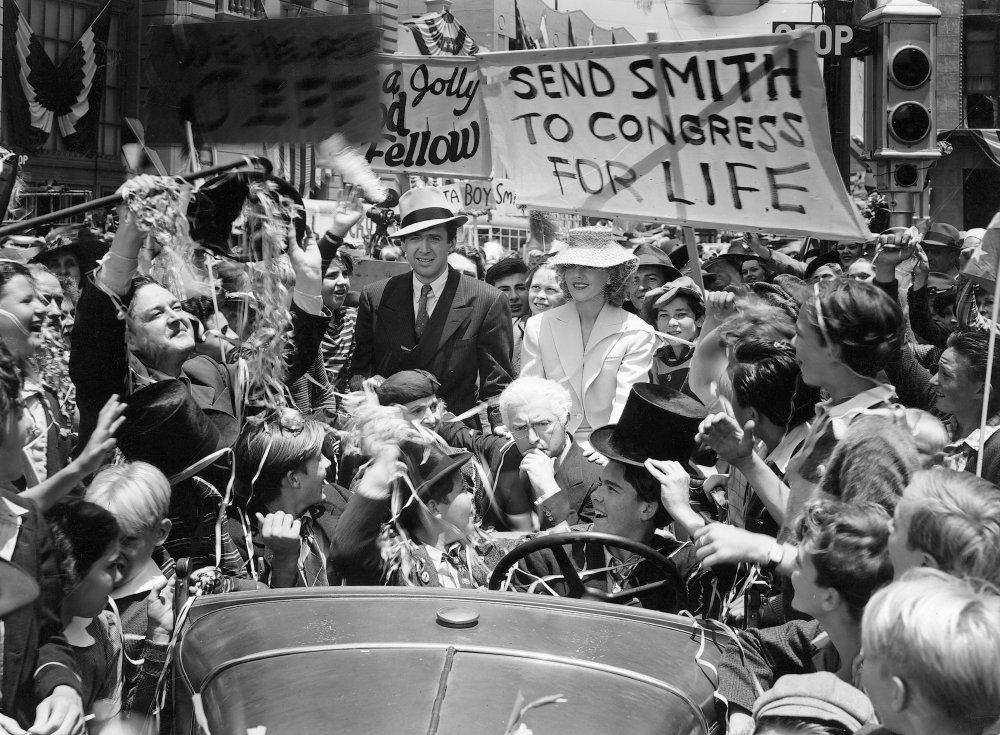 “Film is a disease. When it infects your bloodstream, it takes over as the number one hormone; it bosses the enzymes; directs the pineal gland; plays Iago to your psyche. As with heroin, the antidote to film is more film.” – Frank Capra

Is there a more jaw-dropping, revisionist take on a director’s legacy than The Catastrophe of Success, Joseph McBride’s 1992 biography of Frank Capra? It’s the kind of book to make one re-think an entire body of work, to question what you thought you knew about the man from his films. Capra’s own autobiography, The Name above the Title, served as an exercise in personal myth-making when it was published in 1974. Following an extended period of creative decline, it led the charge in reassessments of the work of a filmmaker who had long been out of critical and commercial favour. For a master audience manipulator, was this postscript to a Hollywood career – this “autohagiography,” as one critic put it – his greatest coup?

“I think every man’s picture is in a sense an autobiography,” Capra once said; and taking McBride’s book along with the filmmaker’s certainly paints a more complex picture of the films than might be immediately apparent. In his 1974 study, The Films of Frank Capra, Donald Willis wrote: “Depending on one’s political point of view and on what Capra film or films or parts of Capra films one is talking about, Frank Capra is an advocate of Communism, fascism, Marxism, populism, conservatism, McCarthyism, New-Dealism, anti-Hooverism, jingoism, socialism, capitalism, middle-of-the-road-ism, democracy or individualism.”

Whichever way you look at it, Capra’s was a storied road from Sicily to America; from Mack Sennett gag man to Oscar sweep; from adulation to naming names for the HUAC committee and industry estrangement. Born 120 years ago on 18 May 1897, he remains one of the most important and contradictory of Hollywood’s golden age filmmakers. 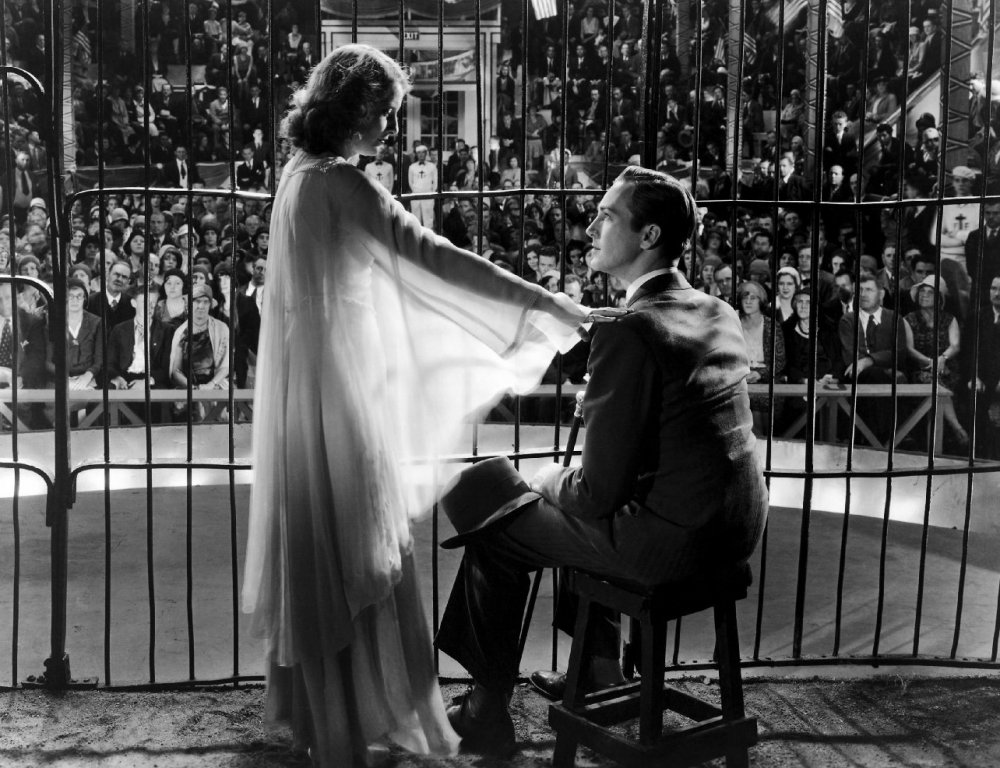 Capra would go out of his way in later years to diminish the contribution of screenwriter Robert Riskin, with whom he collaborated on eight filmed features. The importance of Riskin’s role in forging the Capra mode (and tempering Capra’s worst inclinations) is as readily apparent in the films immediately following their split – in which the filmmaker hewed closely to the previously established template – as in the late-period disasters. The Miracle Woman was the duo’s first project together, adapted (alongside Jo Swerling) from Riskin’s play. The film also marked the second of Capra’s five collaborations with Barbara Stanwyck, here playing a sham faith healer suffering a crisis of conscience. 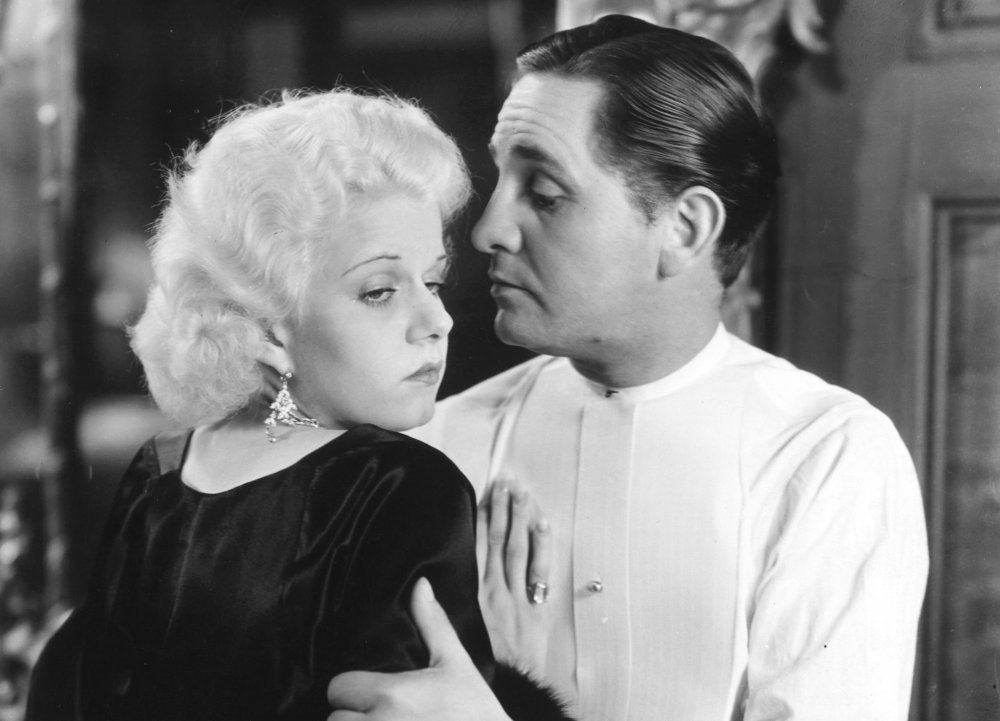 Lady for a Day (1933) may be better remembered as the picture that saw the emergence of the socially conscious filmmaking with which Capra would become synonymous (‘Capracorn’, as it was also ungenerously known), but the rest of the filmmaker’s output prior to the enforcement of the Hays censorship code in 1934 saw him attacking such material with more bite than he would for the rest of his career. Films such as Platinum Blonde – a skewering of high-society mores that sees a reporter shack up with a wealthy heiress – make up for in attitude what they lack in refinement. Jean Harlow and Loretta Young may be the recognisable names here, but it’s Robert Williams who gives a star-making turn as the fast-talking ‘Cinderella’-newspaperman. Said stardom wasn’t to be, with Williams succumbing to a fatal case of peritonitis just four days after the film’s release. 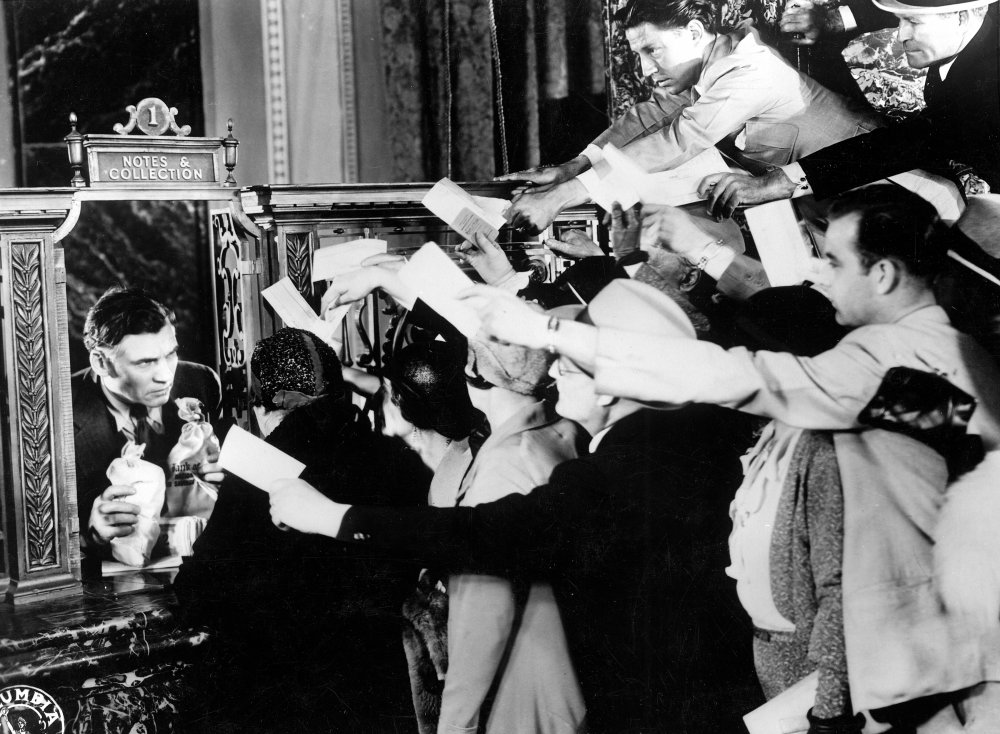 While the creative bankruptcy of his later years would see Capra recycling earlier efforts to dismaying returns, he wasn’t averse to the tactic earlier, even for what would become one of his most beloved films. The run on the Bailey Building and Loans in It’s a Wonderful Life (1946) is prefigured in perhaps the best of Capra’s pre-code efforts, all the more powerful for its appearance at the height of the Depression. There’s something of a proto-George Bailey in American Madness’s benevolent bank manager (Walter Huston) too, offering unsecured personal loans while fighting off a hostile takeover. Panic spreads when the bank is robbed, the town descending en masse to withdraw their savings in one of Capra’s greatest sequences. 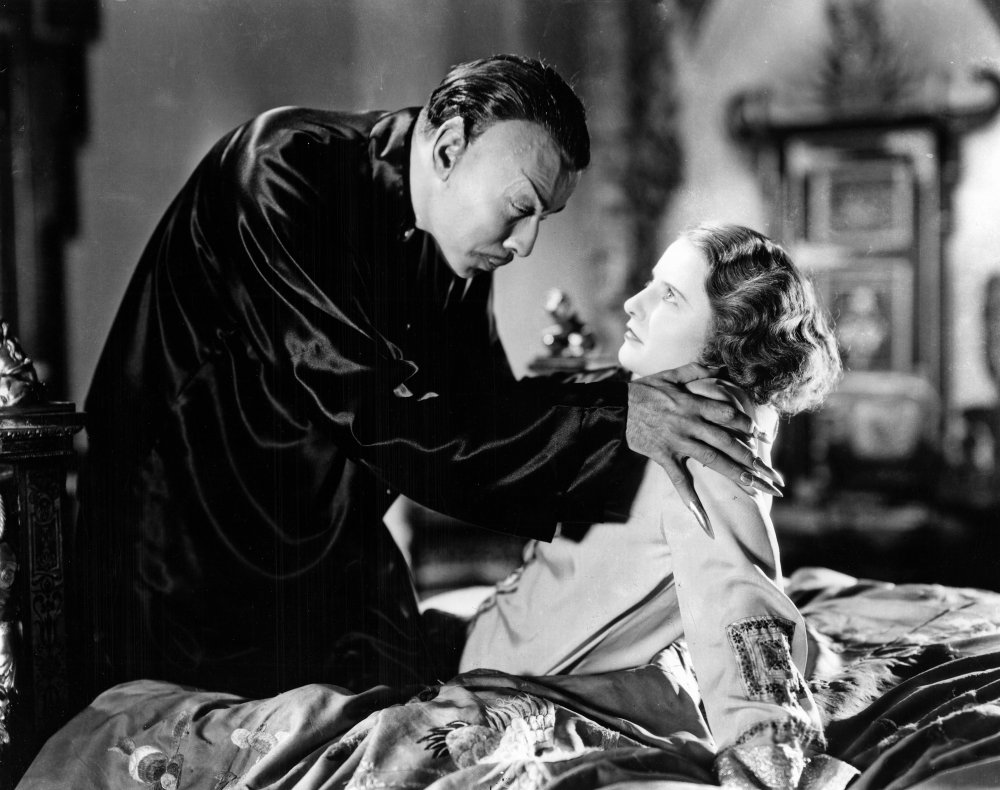 With some 17 pictures under his belt for Columbia by 1932, both Capra and the studio were itching for the kind of recognition that would come with an Academy Award. “They’ll never vote for that comedy crap you make,” Columbia boss Harry Cohn told him. “They only vote for the arty crap.” The Bitter Tea of General Yen didn’t pick up a single nomination, but audiences – at least those that discovered it after its initial commercial failure – were rewarded with one of Capra’s greatest films, and his most atypical. It’s a psychosexual drama years ahead of its time (most notably in an extraordinary dream sequence), and only Capra could undervalue the credit due to his longtime cinematographer, Joseph Walker. 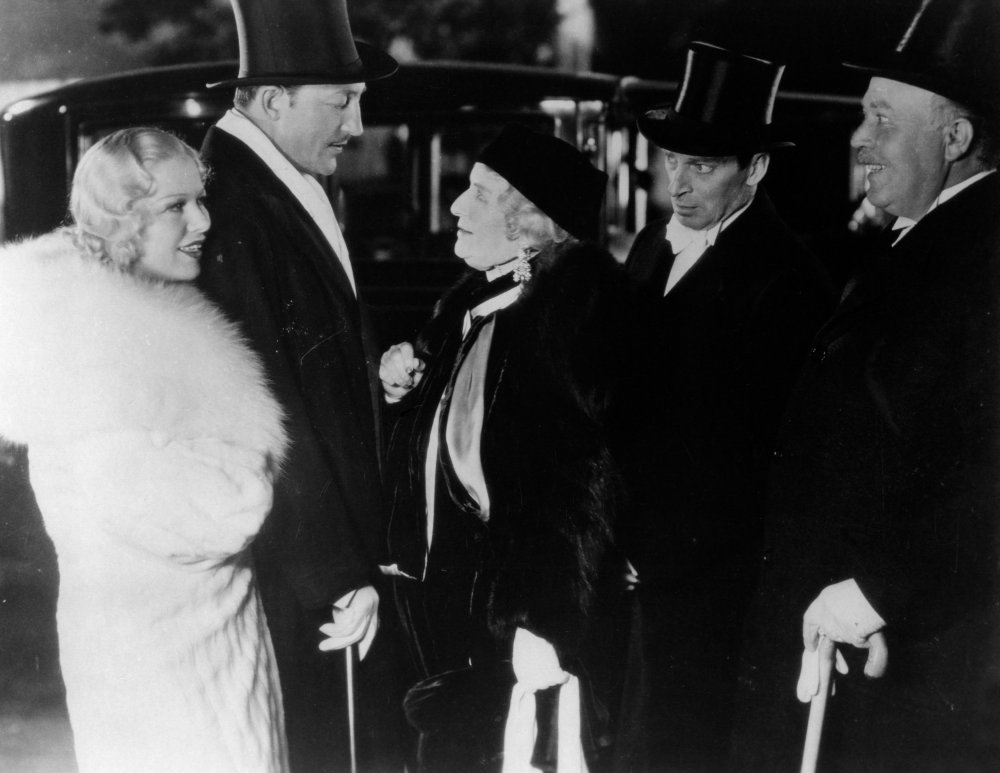 Despite the failure of The Bitter Tea of General Yen, Capra and Cohn got the Oscar nominations they were so desperately craving with their next picture. Lady for a Day may have gone home empty-handed on the night, but it set Capra on the path to becoming one of the biggest names in Hollywood. The story of Apple Annie – a panhandler engaged in an elaborate ruse to convince her newly engaged daughter that she’s married into aristocracy – is unmistakably Capraesque; that is, unmistakably the work of Capra, Riskin and Walker. The rags to riches tale was mirrored off screen too, with the lead role going to one May Robson, a 70-year-old bit-part player for MGM with few screen credits, who deservedly earned a best actress nomination. 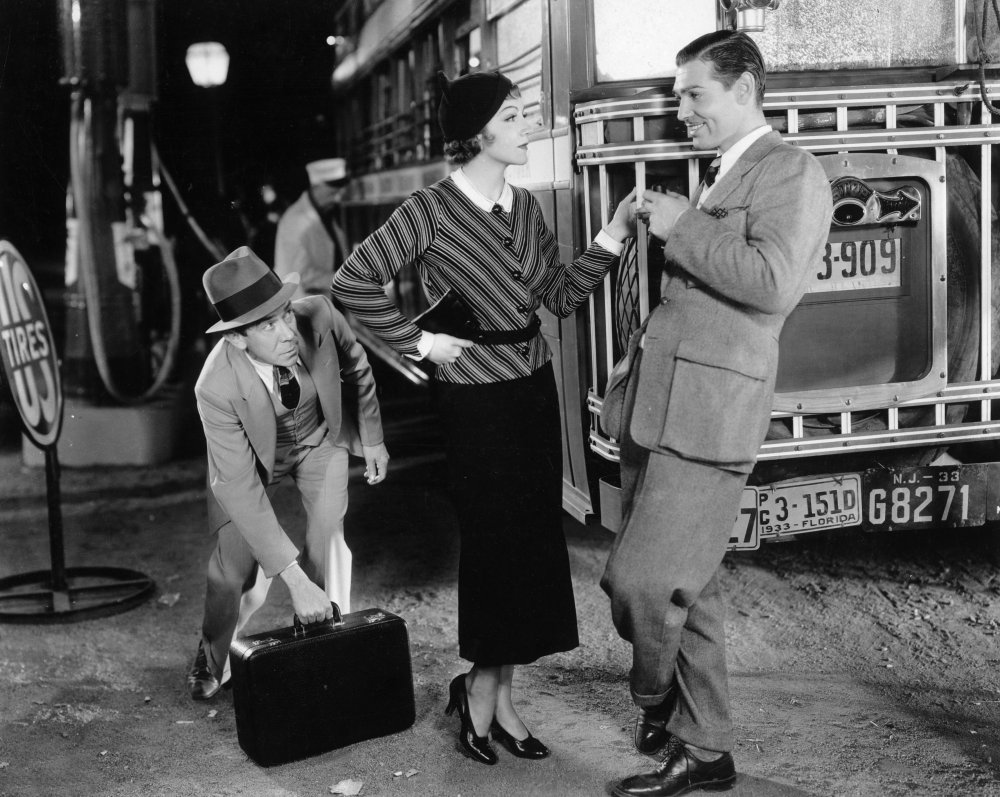 Capra had all but given up on the idea of ever winning the best director Oscar when he decided on a short story called ‘Night Bus’ for his next project. The resulting film, It Happened One Night, became the first of just three films in the history of the Academy Awards – One Flew over the Cuckoo’s Nest (1975) and The Silence of the Lambs (1991) would follow – to sweep the five major categories (picture, director, actor, actress, screenplay). Capra’s smartest coup for arguably his greatest – certainly his most influential – film, lay in the casting of Clark Gable and Claudette Colbert as the dogged reporter and heiress on the lam. The levelling of the social playing field as the two make their way across the US was a hit with Depression-era audiences. It proved one of the most enduring of Hollywood’s golden age screwball comedies… as well as a favourite – much to Capra’s dismay – of a certain Adolf Hitler. 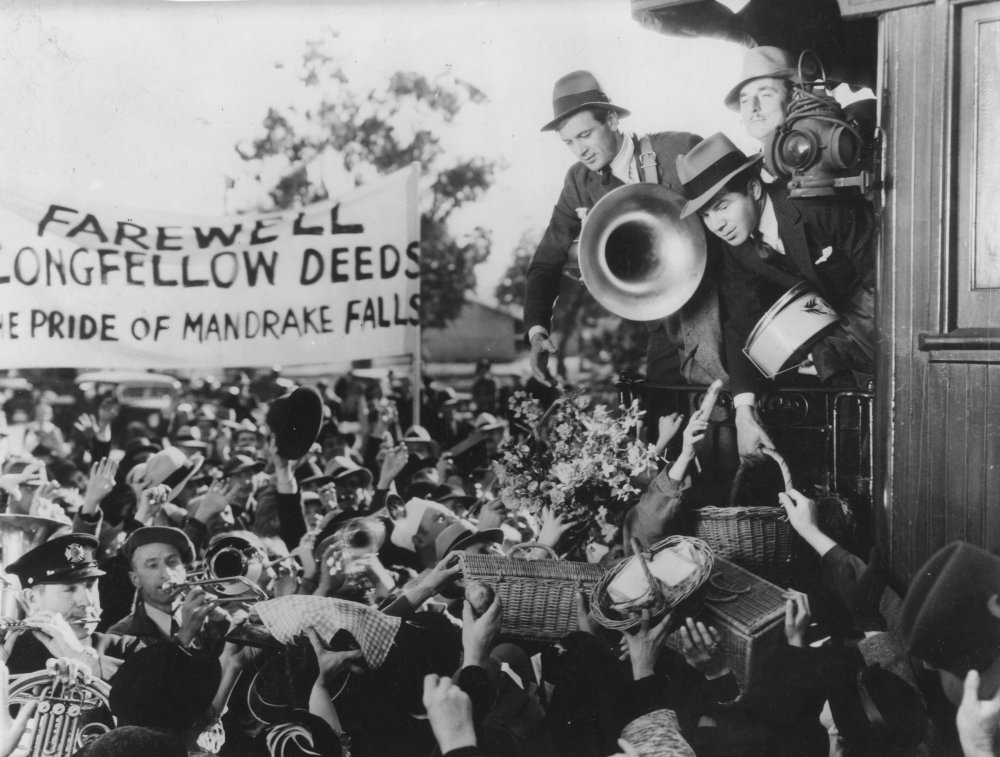 One of the most popular of Capra’s blockbusters, Mr. Deeds Goes to Town saw the director apply his most overt message of social consciousness to an age-old wish-fulfilment narrative. That Deeds (Gary Cooper) himself hardly wishes for the $20m bestowed upon him mattered little to contemporary audiences. Whether the film can be viewed as a liberal statement of solidarity with New Deal economics or mere Republican guilt-appeasement fantasy has been much debated since release, Capra himself flip-flopping between positions depending on his audience through the years. The film remains effective whichever way you look at it, and as emblematic of the tensions in the Capra-Riskin dynamic as they come. 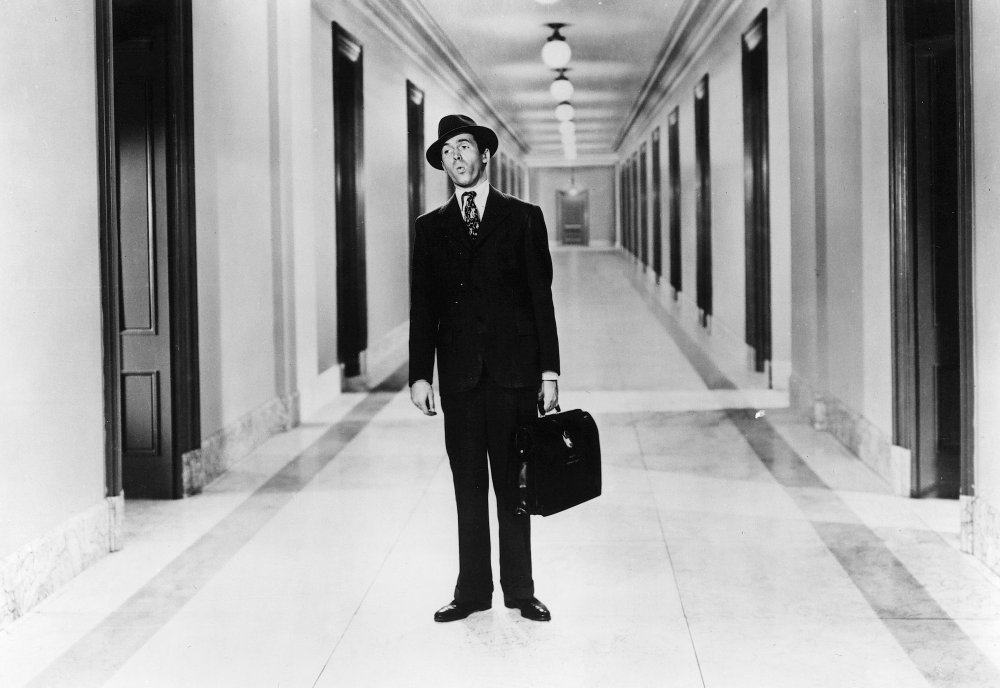 The film that ended Capra’s long relationship with Columbia, Mr. Smith Goes to Washington was the second of three pictures made with Jimmy Stewart, the star most readily identified with the filmmaker. It’s perhaps the quintessential Frank Capra film, the ‘little man’ versus the system narrative this time seeing Stewart’s aw-shucks-idealist taking on congress during a mammoth filibuster session. Without Riskin on hand (it was written by Sidney Buchman), it’s the masterpiece those of an auteurist inclination – and Capra himself – would point to when diminishing the writer’s role in the director’s oeuvre. It’s a part Stewart was born to play, but no less credit should go to the magnificent Jean Arthur, who for one of the film’s best moments took drunk-scene advice from the peerless Howard Hawks. 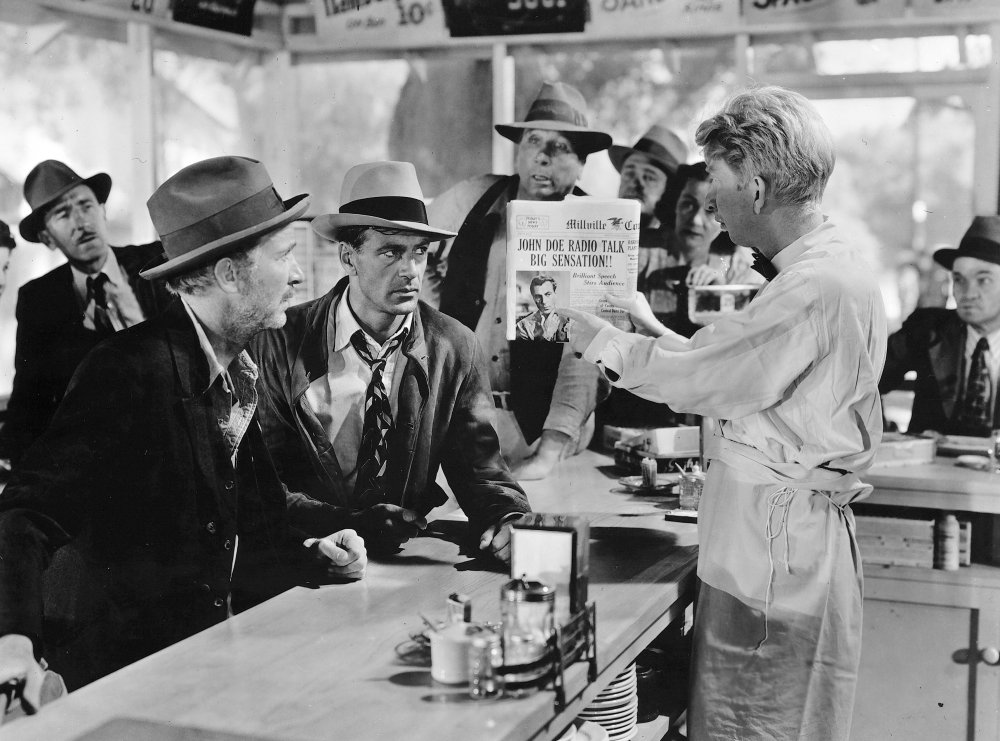 John Doe is planning to jump off a building in protest at the state of the world. Except he isn’t. John Doe is a construct of an about-to-be-fired newspaper woman (Barbara Stanwyck), the fictitious author of a letter she’s written to her own paper in a bid for a series of articles off its back. She convinces her bosses to hire a drifter (Gary Cooper) as the public face of Doe, before a villainous tycoon (Edward Arnold) steps in to turn events to his advantage. It’s Capra’s darkest satire and one of cinema’s great rebukes to incipient fascism and the manipulation of the masses, as personified by Arnold’s D.B. Norton. Could it also be a cynically self-aware treatment on the role of the filmmaker, especially one as adept at button-pushing as Capra? 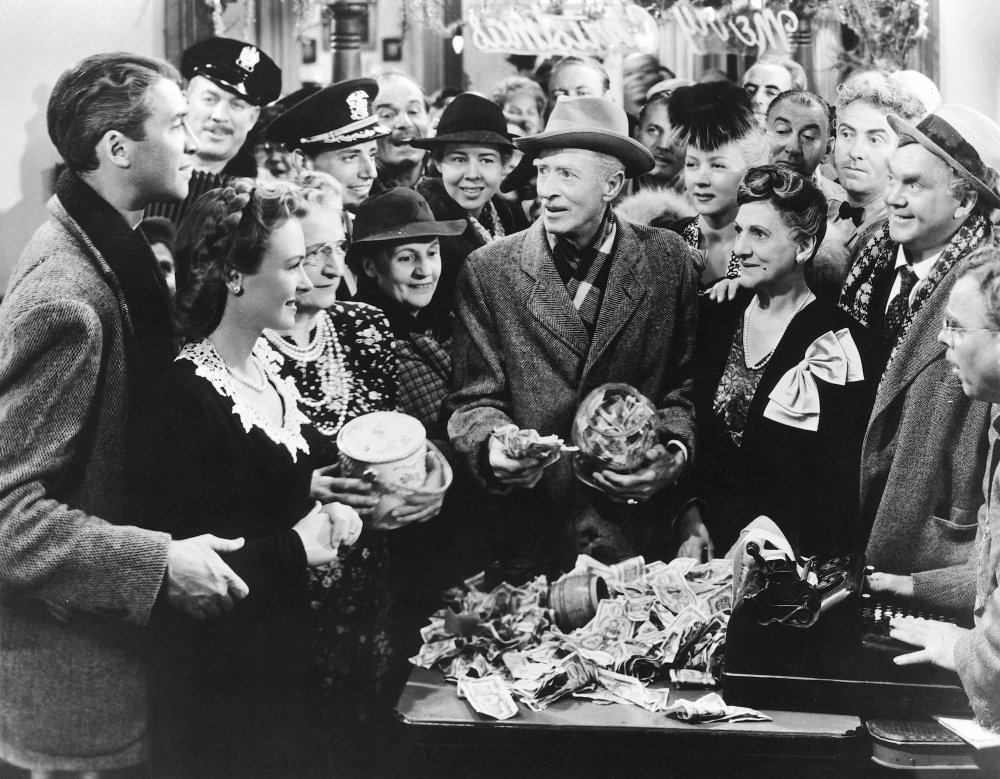 Depending on who you listen to, It’s a Wonderful Life is either Capra’s most enduring classic or symptomatic of his most conservative tendencies. Either way, it’s evidently the result of numerous competing impulses, with Capra marshalling no less than eight screenwriters and three cinematographers. With the war over and the HUAC trials looming, Capra was keen not to let the film appear too “political”, backing away from the more complex implications of (the soon-to-be blacklisted) Dalton Trumbo’s draft in favour of a more black-and-white thematic approach. Lionel Barrymore gives good pantomime villain, but Donna Reed’s Mary is a far cry from the independent women played by the likes of Jean Arthur (who turned the film down for that very reason). Nonetheless, it’s the film for which the director will always be best known, despite a lukewarm initial reception from critics and audiences alike. A perennial seasonal favourite that retains the sense of its melancholy darkness even in its final throes.