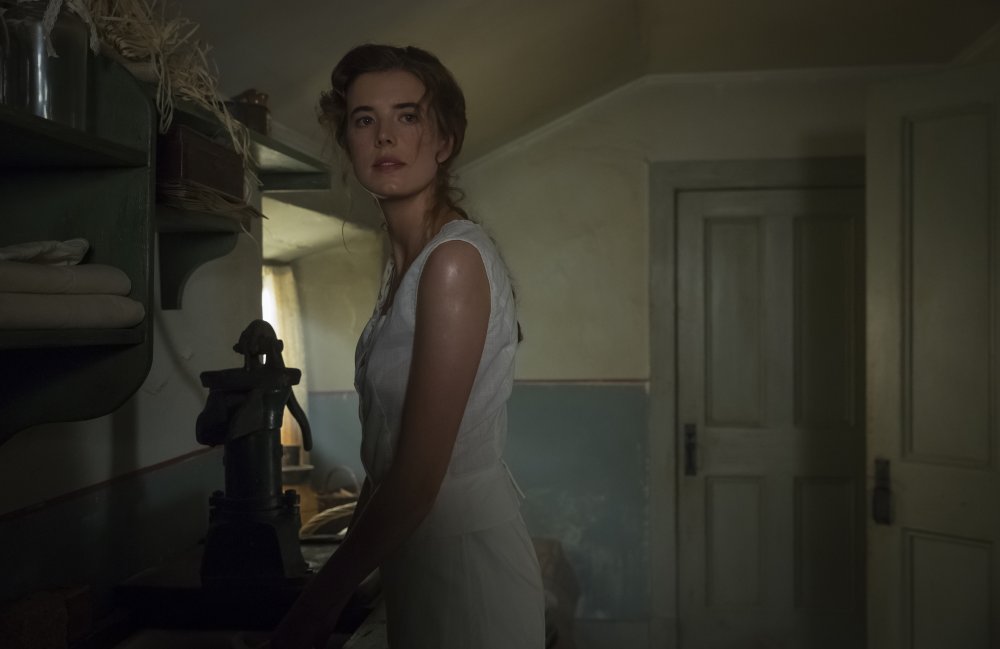 It’s been a long, arduous gestation process for Terence Davies’ latest picture, Sunset Song, which hit UK cinemas in 2015, 16 years after an oft-halted development process began. Its conceptual genesis dates back even further, to 1971 when Davies first saw the BBC TV adaptation of Lewis Grassic Gibbon’s 1932 novel. For a filmmaker known for his measured approach, it’s thrilling to hear a steady hum of details emanating from forthcoming projects. With his Emily Dickinson biopic, A Quiet Passion, set for a 2016 release and an adaptation of a Richard McCann short story collection seemingly ready to go, Davies appears to be entering as welcomely surprising a prolific period as another certain Terrence across the pond.

Sunset Song proves another literary adaptation that belongs unmistakably to Davies. He may no longer be mining his own autobiography as he had with the films which made his name, but there remains a consistency to his thematic and stylistic concerns, a through-line traceable back to his earliest shorts.

Working here on his grandest canvas, and capturing it on the grandest scale – much of the film was shot on 65mm film – Sunset Song is awash with the kind of resplendent beauty (however bittersweet) for which Davies is famed. It’s an exquisite pastoral ode to resilience that demands to be seen on the largest screen possible, all the better to drink in its ravishing compositions.

As a filmmaker for whom moviegoing and memory have proven inextricably intertwined, his is a cinema built of images that dance in the mind long after a final fade to black. Here a five images or moments, sequences that stuck in ours, from the career of Britain’s greatest living director. 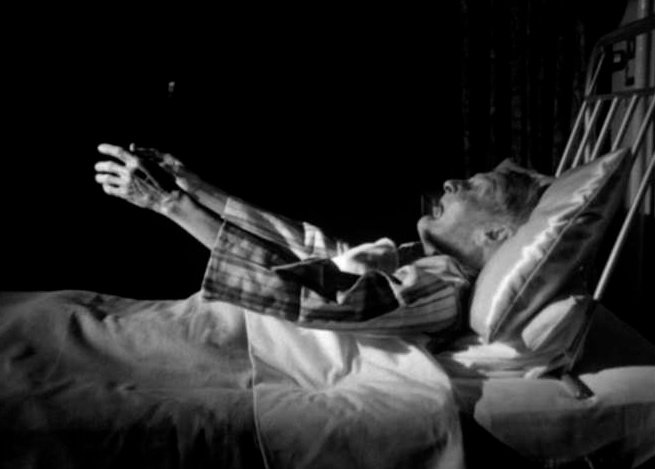 The final part of Terence Davies’ trilogy – after Children (1976) and Madonna and Child (1980) – compresses an entire life into a mere 23 minutes. Like the earlier films, it’s constructed as a series of fragmentary flashbacks, as Davies’ elderly alter-ego, Robert Tucker, recalls impressions of his life from his deathbed. The most emotionally devastating of the three films, Death and Transfiguration opens with an exquisite, ritualistic montage set to Doris Day’s ‘It All Depends on You’, as Tucker attends the cremation of his beloved mother.

Seamlessly fusing the past with the present – one stunning transition moves from an elderly, wheelchair-bound Tucker to a rain-soaked window then back to a middle-aged Tucker without a cut – the film’s most shattering sequence comes at the very end. “When the light goes out, God is dead,” Tucker narrates before a cut to his dying self, a wheezing death-rattle catching in his throat. A silent flashback to his mother and younger self, receding into the distance, before her voice is heard, singing ‘You’re Still the Only Boy in the World’. Tucker reaches out – to God? To his mother? – in the throes of death, a blinding white light signalling the eponymous transfiguration; an ending suffused with a lifetime’s fear, doubt and pain. 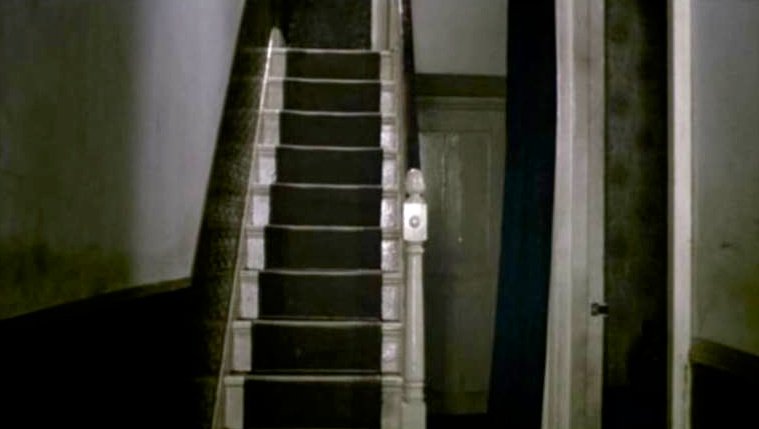 Davies would continue to mine his autobiography with feature debut, Distant Voices Still Lives, an impressionistic recollection of life under a tyrannical father in postwar Liverpool. While hardly a musical in any traditional sense, it’s a film that finds much of its emotional power through song, a means of expression in defiance of silent suffering.

Davies’ kitchen-sink poeticism announces itself immediately, as his camera glides through the family home. After an opening shot takes in the front of the house, the shipping forecast sounding from the wireless, Davies cuts inside. The sound of the rain mingles with the ghostly imprint of voices and footsteps as the camera rests on an empty staircase, moving forward and through a complete 180 degree pan as the mother begins to sing (“It rained when I met you / It rained when I lost you / So I get the blues when it rains”).

It’s an opening of beautiful melancholy, the absence of the family (physically, at least) establishing the site of so much pain and sadness to come from behind its closed door. 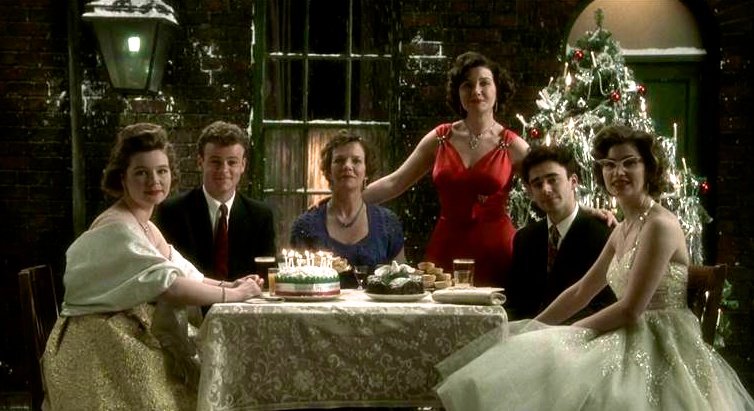 Davies’ final work of direct autobiography (for now, at least) takes place after the traumatic events of Distant Voices Still Lives. Perhaps his most lyrical work, it’s a film bathed in nostalgia, not least a nostalgia for cinema itself, posited as a means of escapism for Davies’ young alter-ego, Bud.

For a film so consistently, poetically beautiful, it’s tough to choose just a single stand-out moment, but its depiction of a Christmas dinner takes some beating. The dining room doors seem to magically part, like the curtains of a cinema screen, revealing an idyllic tableaux of Bud’s family at the table. The scene appears to be taking place both inside and out, as snow falls on the family members looking directly to camera, their positioning taking on a stature of near-iconographic significance in Bud’s mind.

With the cinematic experience such a fundamental part of Bud/Davies’ childhood, it’s fitting that his fondest memories would be couched in such terms, a romantic counterpoint to its traumatic equivalent in Distant Voices Still Lives. 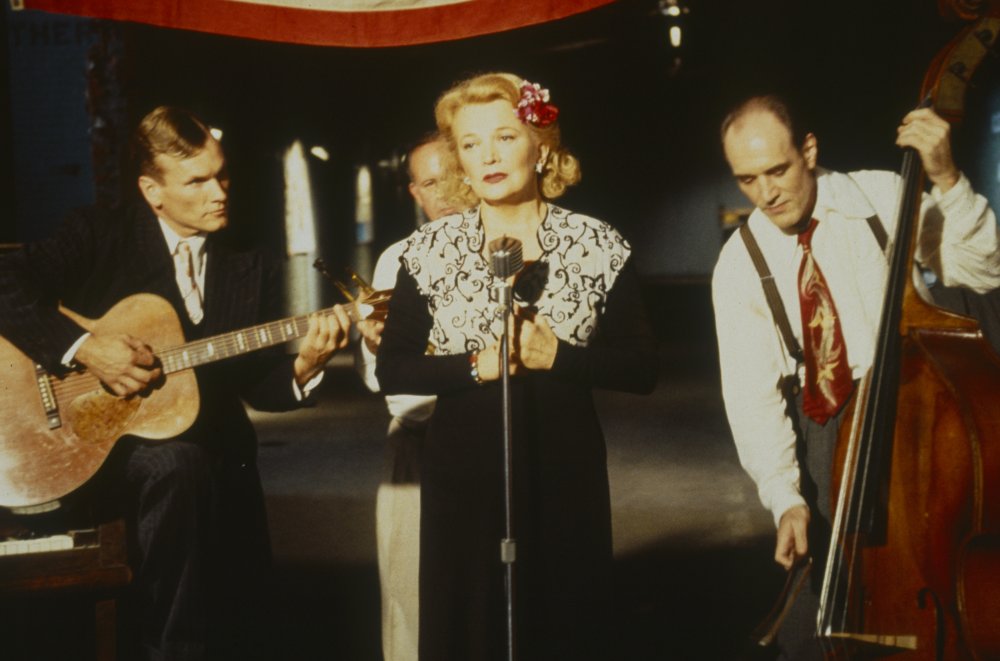 Leaving behind autobiography for the first of his literary adaptations, Davies directed his first bona fide movie star in The Neon Bible. It’s incredible to watch Davies shift to an alien milieu – it’s set in the 1940s Deep South – and still retain the elements that mark the work as unquestionably his, even if it’s arguably more of a mood piece than his previous films.

The violent father (who would again recur in Sunset Song) and religious fervour are present and correct, as is the employment of song, with one of the film’s finest sequences a result of the great Gena Rowlands’ rendition of ‘My Romance’. Davies finds his own Blanche DuBois in the character of Rowlands’ brash, down-on-her-luck cabaret singer, his slow push into her heartfelt performance – straight after a jitterbug jive – a moment of stunning sensitivity that speaks more of her character than any dialogue. A cut to her tearful, abused sister mid-song proves heartbreaking. 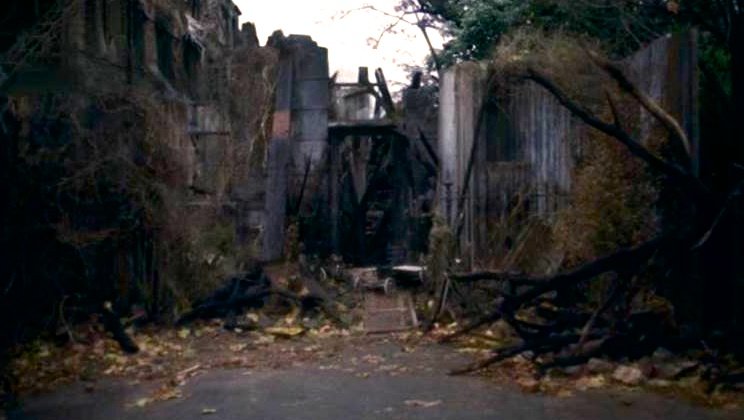 The fallout from a destructive affair reaches its shattering conclusion in the final shot of Davies’ adaptation of Terence Rattigan’s play. Flashing back from circa 1950 to an extramarital wartime romance, the film begins as Hester Collier (Rachel Weisz, incredible) makes another attempt on her life. Through a series of mosaic flashbacks the full extent of the combustible relationships have been rawly exposed, and Davies serves up a reversal of his opening shot.

A nighttime pan across a house and up to its top window becomes a dawn shot back in the opposite direction, Hester looking out of the window, the gas pipes turned on, albeit this time with the fire seemingly lit. Life goes on, if uncertainly. As people cross the morning street on their way to work and a milk van pulls up, Davies’ crane shot finally settles on the bomb damage next to the house, an image as symbolic of the destruction wrought on these lives, or one more optimistically positioned as a near-miss?