Five masterpieces of Japanese widescreen... and how they use the frame

How Japanese mastery of the widescreen image was rooted in the country’s artistic and theatrical heritage.

• Buy the dual format edition of An Actor’s Revenge

No country took so decisively to the new widescreen formats that revolutionised cinema in the 1950s as Japan. The first production using 20th Century Fox’s CinemaScope system, The Robe (1953), arrived in the country within months of its American premiere, with the first Japanese scope features – The Bride of Otori Castle and nationalist war epic Emperor Meiji and the Great Russo-Japanese War – following in 1957.

As Emperor Meiji became the top-grossing domestic hit of the decade, there was a rush of widescreen titles from all the major studios, using their own branded formats, such as NikkatsuScope, TohoScope and Shochiku GrandScope. The changeover was so swift that in 1960, 545 of the 547 domestic releases (99.6%) were widescreen. The only Japanese director of the era to shun the new image size was Yasujiro Ozu.

As in the US, at the root of the rapid adoption of widescreen was fierce competition between studios amid the threat of TV robbing cinemas of their audiences. But the Japanese embrace of the aesthetic possibilities of the expanded 2.35:1 frame was unique, and deeply rooted in the country’s artistic and theatrical traditions.

As critic John Gillett wrote: “The best Japanese scope films reveal a mastery over this format which makes it impossible to envisage them in any other form. Spectacle, of course, thrives on the wide screen, but these films also reveal an acute awareness for the placement of individual figures within the frame to create fluid, harmonious patterns.”

Feel the width in these examples from five classics of the early widescreen era, compiled to mark the release of An Actor’s Revenge on Blu-ray and DVD.

In Giants and Toys, the director celebrated the shock of the new in a biting and flamboyantly staged satire based around the exploits of the marketing men of rival confectionery companies and their increasingly absurd attempts to gain the lion’s share of the market.

The team of one such player, World Caramel, looks like it has stolen a march on its competitors after it plucks a perky young gamine named Kyoko from the slums and grooms her as its campaign girl. She has other plans, however, mutating into a grotesque caricature of celebrity as the nation takes her into its heart.

The film opens with a still photo of Kyoko repeatedly tessellating to fill the screen before the title appears accompanied by a horrified scream on the soundtrack. The moment says much about the omnipresence of advertising imagery and celebrity culture in this bold new age of disposable mass production

Garish colours abound in the office interiors, crammed with ranks of white-collar workers and jumbled arrangements of calendars and sales graphs. The depth-of-field constraints of anamorphic lenses encouraged an aesthetic of flatness, longer takes and a new way of ‘reading’ the screen. Note the horizontal positioning of the characters

A jumbled artificial skyline of skyscrapers and World Caramel’s spinning globe logo is visible through the background window, while the frame of the interior glass partition neatly bisects the screen

‘I like TV, no one demands their money back’, a character observes at one point, but the appearance of small TV sets in many scope features of this era underscores cinema’s superiority in terms of spectacle. Kyoko’s appearance in World Caramel’s advert playing in the background of this bar scene signals television’s role in her ascendence from street urchin to star

The exoticism and spectacle of musicals made them well-suited to the new widescreen era. Here Masumura includes an exotic cabaret show that serves as spectacle in its own right, while depicting Kyoko’s liberation from the shackles of her role as World Caramel poster girl

Kon Ichikawa’s celebrated comic melodrama is a remake of a 1935 film by Teinosuke Kinugasa. Celebrating his 300th film appearance, Kazuo Hasegawa reprises his role as the famed female impersonator Yukinojo, who uses his feminine wiles to bring down those responsible for the death of his parents.

Hasegawa began his career on the kabuki stage before making his name as a silent movie star in the 1920s, while Ichikawa himself started out in live-action puppet animation. No surprise then that the director, in recreating the self-contained world of Edo theatre, should go all out on the camp kabuki-esque theatrics. He treats the scope screen as a blank canvas to be filled with abstract forms and lurid Agfacolor hues.

Some have attributed the Japanese mastery of the scope frame to its similarity with emaki narrative picture scrolls, read from right to left, and the elongated span of the Kabuki stage. This shot of the curtain sweeping across the stage to mark the end of Yukijono’s performance echoes an earlier scene in which a right-to-left screen wipe effect performs the same function

The use of overhead floating birds-eye shots, an artistic technique known as ‘fukinuki yatai’, presents an omniscient point-of-view that’s very different from the objective perspectives of western art. Note the use of non-converging parallel lines, which distil the image into a flat, angular abstraction

The exterior night scenes were shot on empty sound stages, with minimal set dressing and all extraneous details plunged into complete darkness. Ichikawa exaggerates the unbalanced compositions and the use of emptiness (mu) as a design element to create a comically playful artificiality that’s highly cinematic. The lasso, stretched tight, leads the viewer’s eye leftwards across the otherwise empty screen as the two policemen attempt to reel in their quarry, creating dramatic tension as the viewer speculates what lies beyond the frame

In this inventive flashback sequence, Yukinoji confronts the man who violated his mother, while her suicide is shown as a shadow performance beside him

Some have attributed Seijun Suzuki’s eccentric approach to composition and editing as a way of overcoming the breakneck shooting schedules he was restricted to while making B-movies at Nikkatsu in the 1960s.

In reality, his films were meticulously planned prior to filming, his scripts rewritten in conjunction with his regular production designer, Takeo Kimura, and his cinematographers (in this case Kenji Hagiwara).

To this end, the team radically reworked Kaneto Shindo’s original screenplay for Fighting Elegy, an allegorical tale about the rise of fascism in the 1930s. It follows the misadventures of high-school bruiser Kiroku Nanbu and the gang of surly adolescents with whom he’s drawn into rambunctious bouts of fisticuffs outside of school hours.

Nanbu’s aggressive instincts are tempered only by his surreptitious encounters with Michiko, his landlord’s daughter. This single-take scene provides a wonderful example of Suzuki’s efficient use of depth within a scene. Nanbu’s cloying obsession with Michiko is emphasised by the dappled shadows created on the righthand back wall by leaves blown by a gale outside. The wind adds an undercurrent of dramatic tension on the soundtrack too. As Michiko melodically practices at the piano, her mother’s voice off screen asks where the towels are, before the camera pans left to reveal Nanbu’s guilty departure through the back door

This shot, in which Nanbu is left shamefaced after being discovered promenading with Michiko by school bully Takuan, highlights Suzuki’s unorthodox approach to positioning characters within the frame: Nanbu stands separated from the others by a gulf of blackness peppered with decorative cherry blossoms

In a single shot, Suzuki humorously conveys the classroom dynamics between teacher and students

Nanbu’s encounter with the local tough guy in the small town he has been transferred to shows a similarly eccentric approach to composition, with the two figures squashed onto the extreme periphery of the image

Kaneto Shindo’s hyper-stylised take on Japan’s classic ghost cat formula does for bamboo what the director’s previous supernatural parable Onibaba (1964) did for bulrushes. Their towering, swaying forms picked out among the abyssal darkness dominate the aesthetic.

Set during a time of civil war in the medieval Heian era, it’s a tale of rape, murder and revenge in which the restless spirits of a mother and her daughter-in-law return from the grave, reincarnated with the spirit of a black cat, to seduce and murder the unruly mob of soldiers responsible for their deaths.

The masterful use of light and shadow, and the repetition and re-staging of key sequences with subtle variations, create a minimalistic dreamscape in which emptiness becomes a crucial thematic and compositional component. 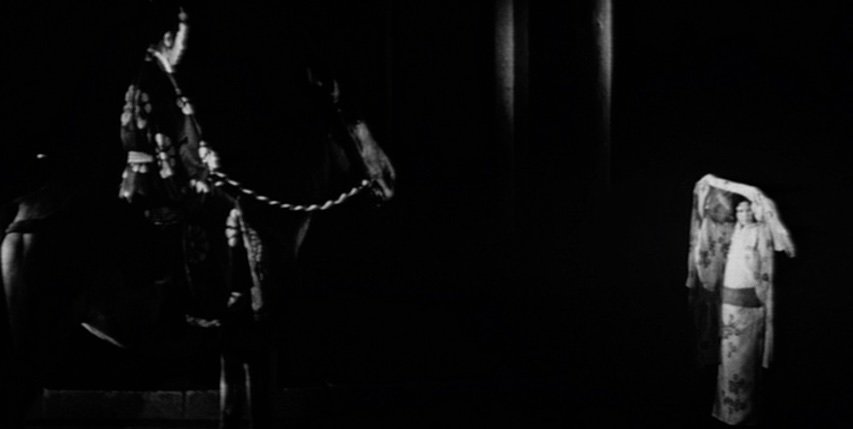 The first encounter between one of the assailants and the murdered younger woman occurs beneath the Rashomon gate that marks the boundary between the city of Kyoto and the dark wilderness beyond. The absence of depth here makes the female figure appear smaller than her murderer as she emerges from the darkness, highlighting her ethereal presence 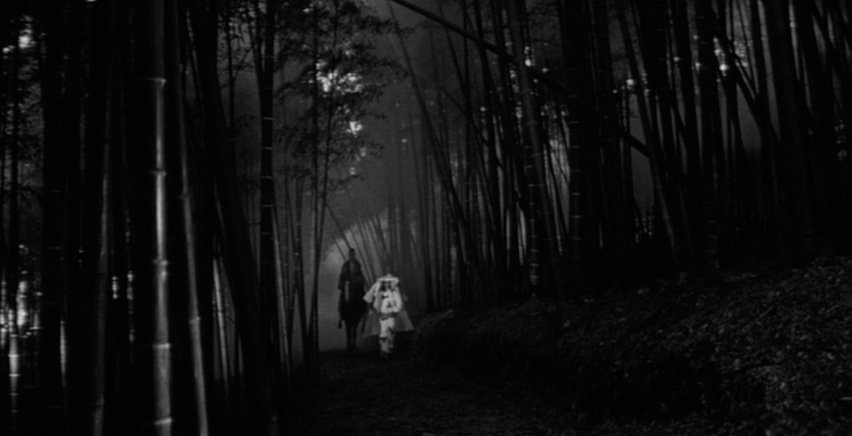 The towering bamboo canes mark the boundaries of the otherworldly domain in which much of the film unfolds, as the murder victim draws her prey into darkness from the world of light 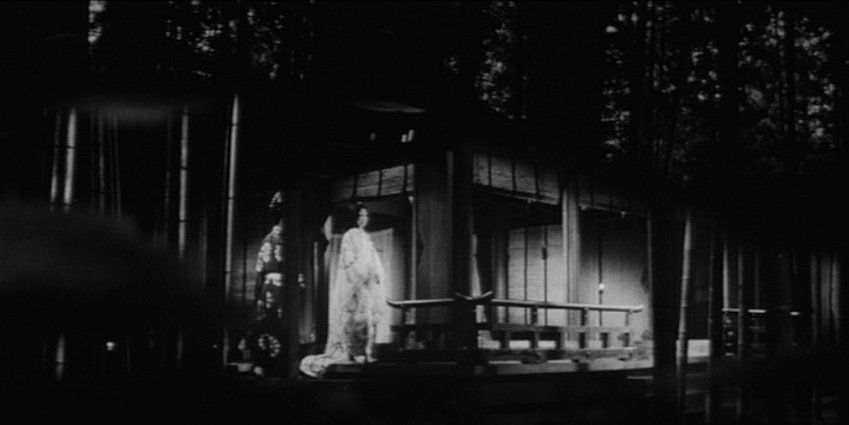 This long take, reminiscent of Kenji Mizoguchi’s Ugetsu Monogatari (1953), with the daughter luring the soldier into the women’s numinous domain, employs an eerie composite effect, with the bamboo grove continuing to move to the right of the screen while the house remains static 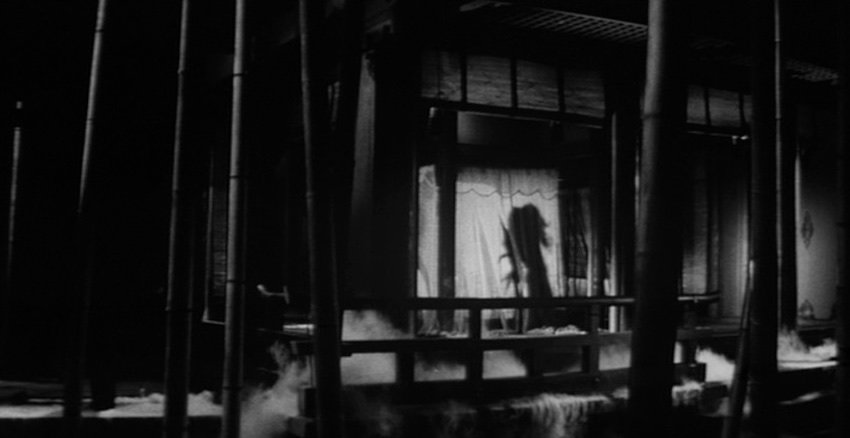 In traditional Japanese art, the spectator is encouraged to scan the image laterally and shadows are seldom used to render space, as in the soldier’s murder that occurs silhouetted against the curtains 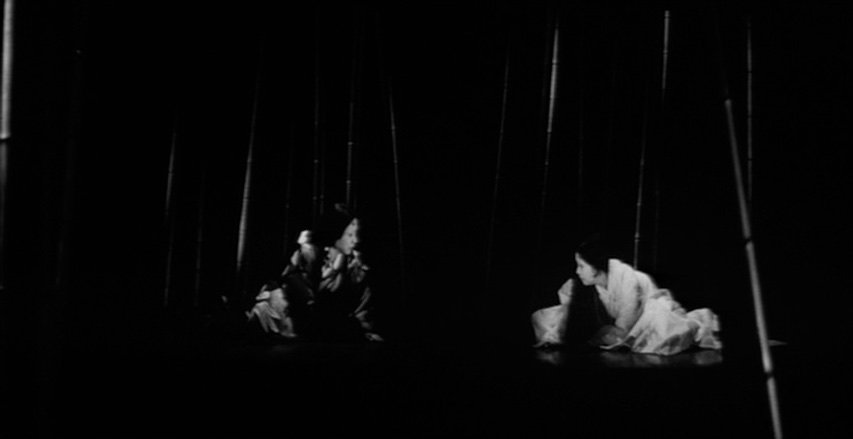 Produced at a transitional stage in Nikkatsu’s history, Yasuharu Hasebe’s portrait of renegade mobsters rallying to protect a farming community’s ancestral lands from a ruthless land-grab by their yakuza gang bosses reflects internal struggles then occurring within the company itself.

Retaliation boasts the studio’s full roster of top action guys, including Akira Kobayashi, Jo Shishido, Tamio Kawachi and Hideaki Nitani, all of whom would have their contracts terminated within the next year or so due to company restructuring. Stylistically, it marks a turning point from the more classical approach of the yakuza genre to the agitated documentary approach characterised by Kinji Fukasaku’s Battles without Honour and Humanity films of the early 1970s, full of moving cameras, jarring edits and frantic zooms and pans.

In the style of an observational documentary, use of long lenses keeps the viewer at a detached distance throughout the film. Jiro’s release from jail after taking an eight-year fall for his gang is an early example, in which the limited depth of field draws the spectator to look at the area of the screen that’s in sharp focus

The flattened perspectives often yield striking abstractions, with the bright green smudge of the foreground plant and the exotic décor of the Chinese restaurant as much features of the two-dimensional image as the characters within it

The overhead viewpoint foregrounds the ornamental qualities of the image, while long unbroken takes give viewers the freedom to scan the frame to construct their own meaning from the scene

A wealth of visual information is contained within individual shots in Retaliation. Many scenes contain foreground objects or figures that obscure the action yet serve to fill the screen with startling combinations of movement, form and colour

Hasebe also makes abrupt switches to extreme wide shots, such as in this scene in which a tightly framed fistfight in the cramped back room of a shop moves into a narrow alley outside. The fighters are barely visible in the bottom right-hand corner of the frame. The implication is that this particular conflict is but one tiny, hidden part of the greater ongoing battle over who owns the capital’s skyline