He may be best known for his melodrama masterpieces, but they are just the pinnacle of Douglas Sirk’s remarkable career. 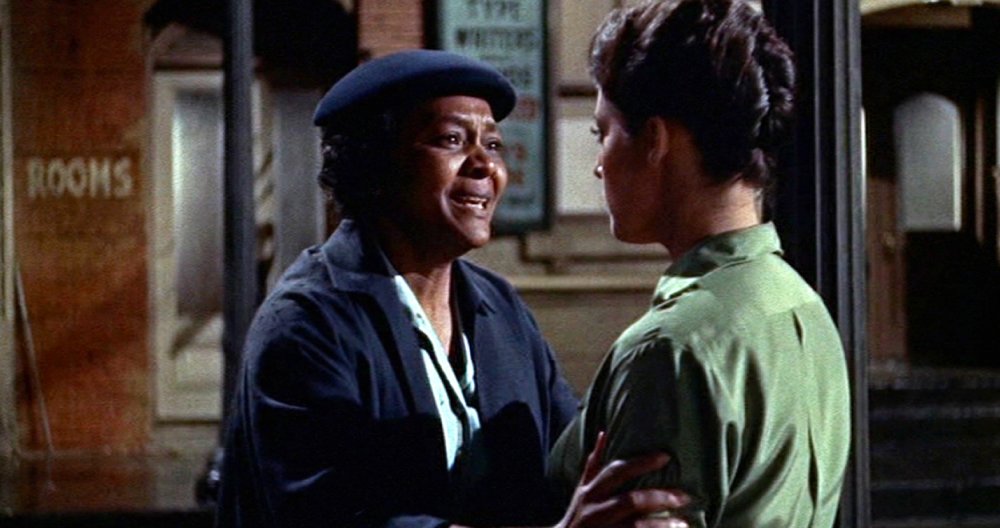 Douglas Sirk is so synonymous with 1950s melodrama that it is easy to forget that he made dozens of films across Germany, the Netherlands and the US before his brilliant run of so-called ‘women’s pictures’, from All I Desire (1953) to Imitation of Life (1959).

Although critically derided, many of these melodramas were huge hits at the box office, making Sirk’s decision to retire from filmmaking so early all the more surprising. In 1967 the French journal Cahiers du cinéma reappraised Sirk’s work, and he is now seen as one of cinema’s great social critics. Cunningly, he chose melodramas (seen then as soapy concoctions for female audiences) as vehicles for his critiques, subtly dissecting prejudice and avarice under a seemingly innocuous surface. He has had a huge influence on directors such as Pedro Almodóvar, Todd Haynes and Rainer Werner Fassbinder.

It’s an astonishingly diverse career, featuring several undervalued collaborations with George Sanders, a marvellously atmospheric chiller with a pre-superstardom Lucille Ball (1947’s Lured) and – a real curio – a Dutch film called Boefje (1939) that features 46-year-old actor Annie van Ees playing a 12-year-old boy. Some are flawed – Taza, Son of Conchise (1954) is an unhappy western featuring white stars giving wooden performances as Native Americans, while Battle Hymn (1957), made during his otherwise terrific run in the late 1950s, is bland and schmaltzy.

But while his later melodramas are the most celebrated, many of his earlier works are terrific in their own right, and show the roots of an interest in the themes that would be developed more fully in his final few masterpieces. 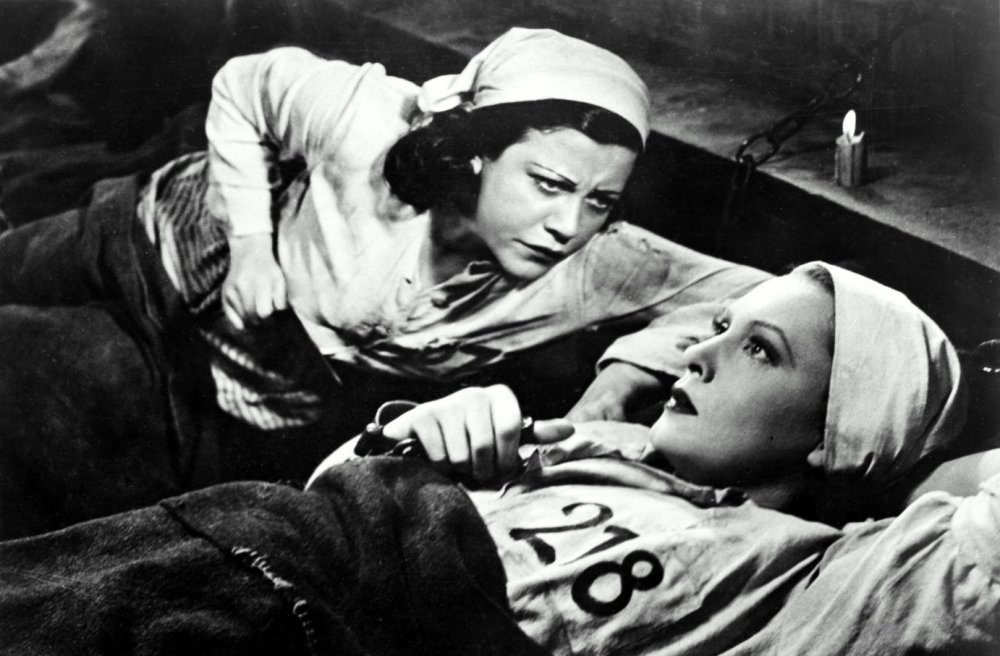 Sirk’s most interesting film for UFA (the leading German studio of its day used by the Nazis for its propaganda films) is a tale of a woman brought down by the inadequacy of men around her. Zarah Leander plays a singer in Victorian London, who takes the blame for the crimes of her aristocrat lover and is deported to Australia. When she is spurned by her former beau, her only hope to escape prison is if someone agrees to marry her. A local farmer takes pity on her – but will she become his wife?

The film makes for interesting comparison with Alfred Hitchcock’s Under Capricorn (1949), which shares a similar central storyline. Sirk loved unconvincing ‘happy’ endings, and Zu neuen Ufern has one of his best. Leander gives a strong performance as the desperate heroine. Following the war, she was shunned in her native Sweden for allying herself with Nazi propaganda, but continued to be a popular figure in Germany. 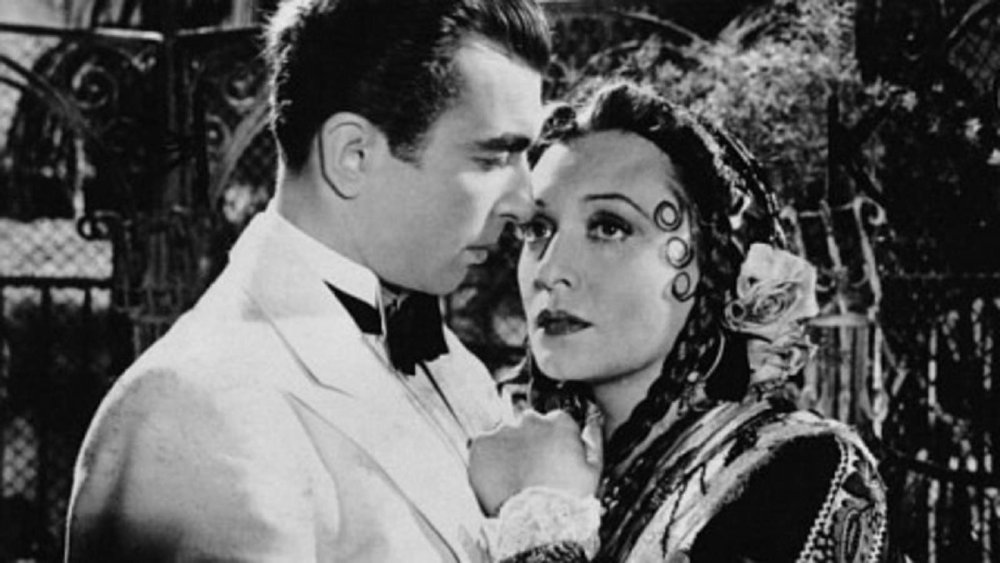 Zarah Leander suffers again in her second film with Sirk, but here her character is much stronger – she plays a Swedish woman who, on holiday in Puerto Rico, runs off the ship to stay in the exotic locale to become the wife of a wealthy landowner. Alas, he’s a brute, but 10 years later she’s still with him, refusing to leave her young son. Meanwhile, a deadly fever threatens the island, and two visiting doctors offer a chance of escape.

La Habanera’s endorsement of the Nazi ideal of returning to your roots (or Heimat) and not giving in to foreign temptations make this a classic example of a nationalist UFA film. Sirk left Germany soon after, disgusted by Nazi oppression. 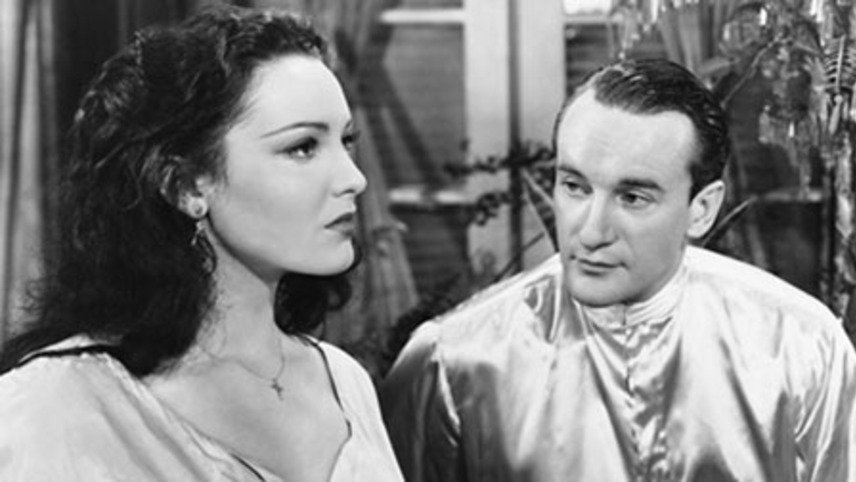 Before this adaptation of Chekhov’s 1884 novel The Shooting Party, Linda Darnell was valued for her beauty rather than her acting ability, but her role here as Olga, a peasant girl who ruins the lives of three men in her quest for wealth and social standing, relaunched her career. She’s brilliant, particularly in her wedding scene, where she is aware of the patronising scorn of the aristocrats around her, adding fuel to her plan to improve her station. George Sanders gives one of the best male performances in Sirk’s canon, as the weak judge who falls in love with Olga.

The critique of the limited options available to women is pure Sirk, while there is a moment of suspense that recalls Hitchcock, when a maid sees something disturbing from her changing room. The ending, where the judge has a life-changing decision to make, shows Sirk’s eye for human fallibility at its keenest. 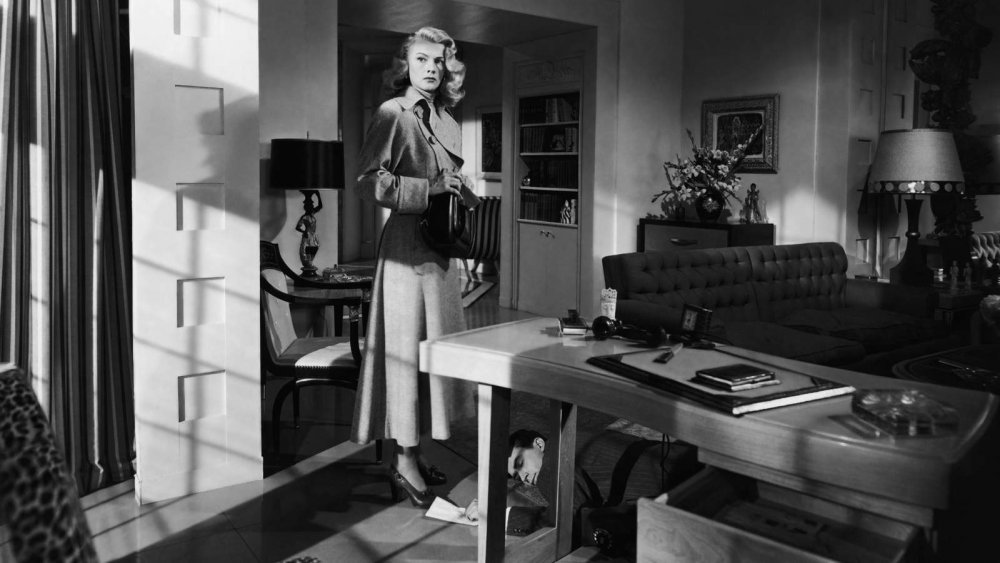 While a film directed by Sirk and scripted by Sam Fuller (just before he kickstarted his own directing career with the same year’s I Shot Jesse James) should have critics cheering, Shockproof, though a superior noir with excellent performances, isn’t the masterpiece it should be. Sirk was a master of ironic happy endings, but the last couple of minutes of Shockproof are rushed, unconvincing, and, unlike the grand finale of Imitation of Life, they undermine rather than challenge the preceding drama.

But there is lots to enjoy, with a great femme fatale in Patricia Knight as an ex-con under the supervision of a parole officer (Cornel Wilde), who falls in love with her, while a shady character from her past comes back on the scene and threatens to drag her back to her old ways. The image of Knight in this film was borrowed by pop-art pioneer Richard Hamilton for a couple of his collages.

Magnificent Obsession is seldom regarded as top tier Sirk, but the weird, inherent creepiness of its hero’s actions make for a fascinating watch. After accidentally causing the death of a doctor and the blindness of his widow, a rich playboy trains to be a surgeon to restore the woman’s sight, and falls in love with her, although she doesn’t know his true identity.

Wyman was nominated for an Oscar for her role, but decades later it’s the unrestrained emotional punch that lingers – 1950s melodrama doesn’t get any more, well, melodramatic. Vision, literal and metaphorical, is a key theme. Sirk himself liked the outré plotline, later stating: “this is a damned crazy story if there ever was one”. 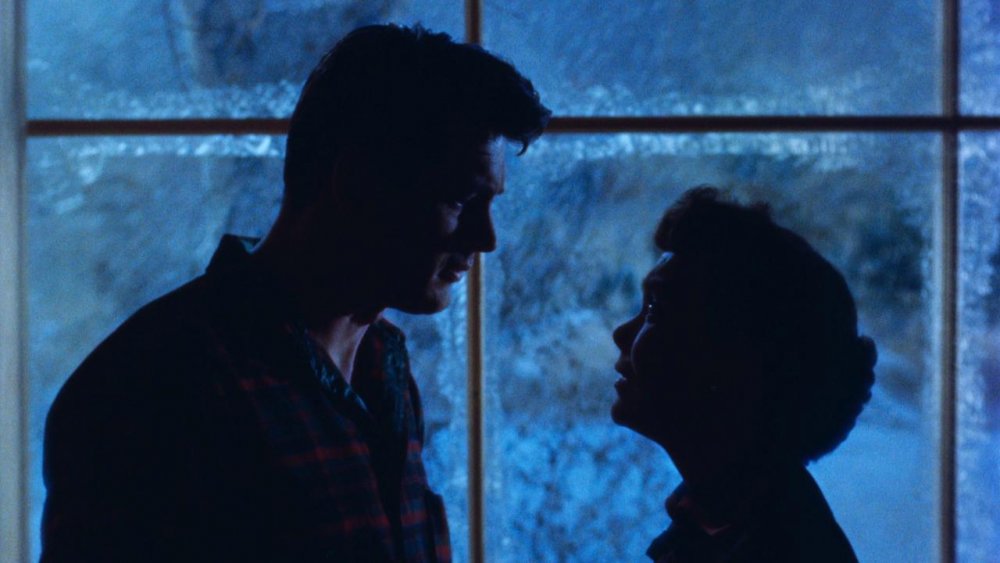 In one of cinema’s most scathing attacks on the ugly paranoia and hatred that can lurk behind suburban walls, Jane Wyman stars as Cary, a widow who falls in love with a younger gardener (Rock Hudson), to the disgust of her adult children and her ‘friends’ in the community. It’s an utterly beautiful film to look at, but the nastiness and snobbery on display is anything but.

The scene where Cary’s horrible children offer their mother a replacement companion – a television – is a bitter classic. All That Heaven Allows was a huge influence on Rainer Werner Fassbinder and Todd Haynes, who paid homage to the film in Fear Eats the Soul (1974) and Far from Heaven (2002) respectively. 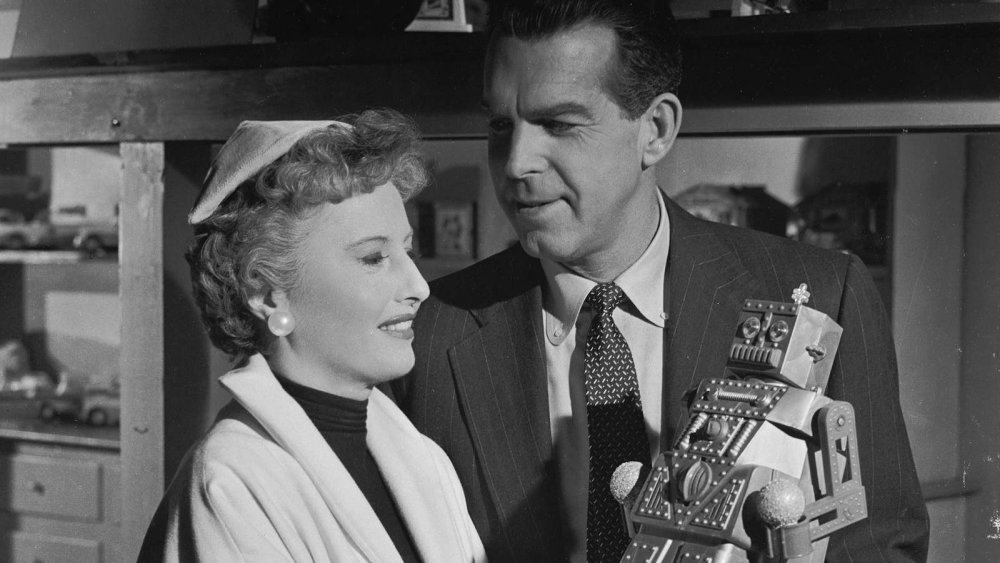 Toy manufacturer Fred MacMurray lives in suburbia with his deliriously conformist family, who regard him as little more than a walking wallet. When a former colleague (Barbara Stanwyck, on brilliant form) shows up on his doorstep, their connection is immediate and he finds potential escape from his mundane existence. Will he yield to temptation?

There’s Always Tomorrow tends to be neglected in analyses of Douglas Sirk’s melodramas. This is a great loss, for in this bitter destruction of the American dream Sirk’s brilliance is at its zenith. Unlike in many standard melodramas, here the audience actively wants the hero to commit adultery – MacMurray’s manipulative children are even more selfish than those in All That Heaven Allows, while he himself is in danger of becoming like his latest invention, a talking robot. 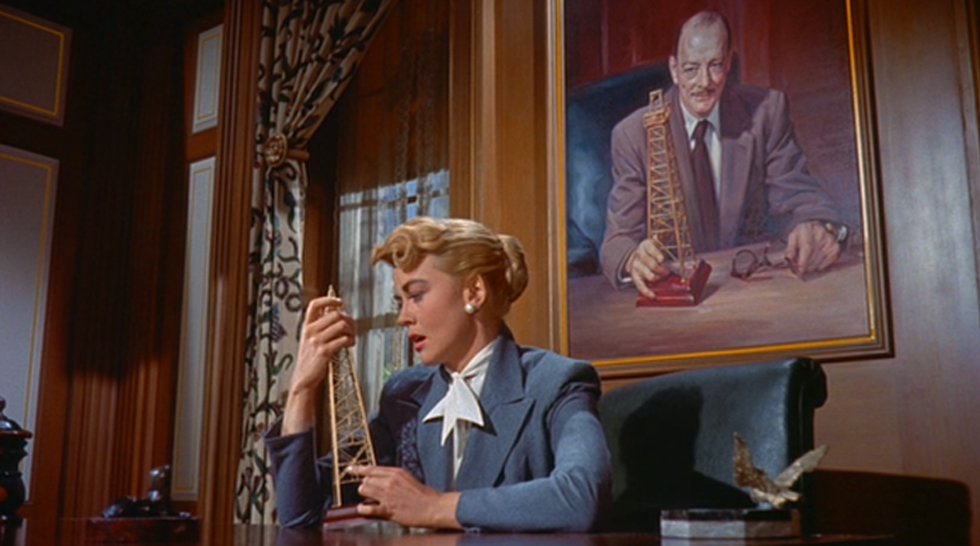 A noble secretary (Lauren Bacall) marries into the Hadley dynasty, a mega-rich and corrupt family. Her husband (Robert Stack) is hugely jealous of his good-natured surrogate brother (Rock Hudson), while his scheming sister (Dorothy Malone), the Iago of the film, sows suspicions of his wife’s infidelity.

Hudson and Bacall may play the heroes in Written on the Wind, but it’s the flawed, damaged rich kids who Sirk is most interested in. Malone, especially, gives a larger-than-life, almost experimental performance as the black sheep of the family, and won an Oscar for the role. Its portrayal of the rot at the heart of extreme wealth would be explored in a similar setting in popular US soap Dallas (1978-91). Pedro Almodóvar said of the film: “I have seen Written on the Wind a thousand times, and I cannot wait to see it again.” 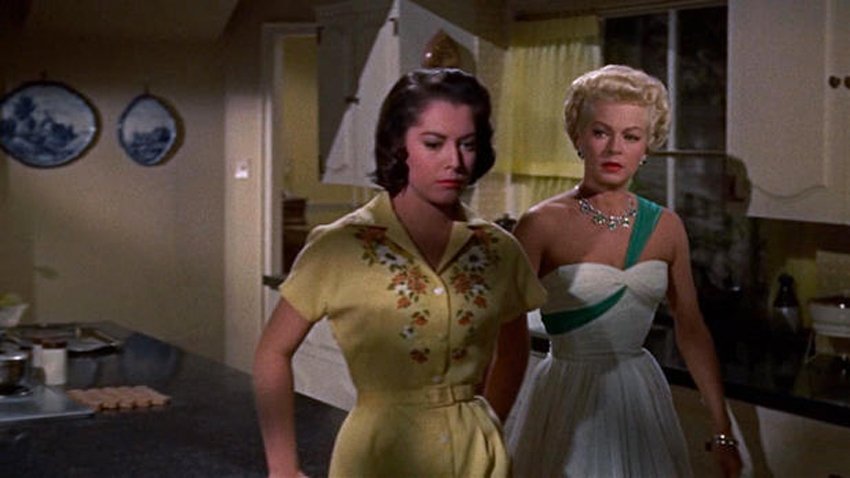 Sirk’s final feature is a remake of a classic 1930s film about an actor’s relationship with her black maid. Sirk plays with the racial tension of the piece, and once again it is the most obviously destructive character who is the most sympathetic – the maid’s daughter, who can pass for white and is ashamed of her black heritage. Her treatment of her well-meaning mother is appalling, yet Susan Kohner’s incendiary performance, filled with desperation and drive, is astonishing, and the audience empathises with her unenviable plight.

The scene where Kohner atttempts to humiliate her mother, provocatively adopting a black ‘mammy’ drawl as she serves drinks to guests, crackles with tension, and a deathbed scene near the end is Sirk at his best. 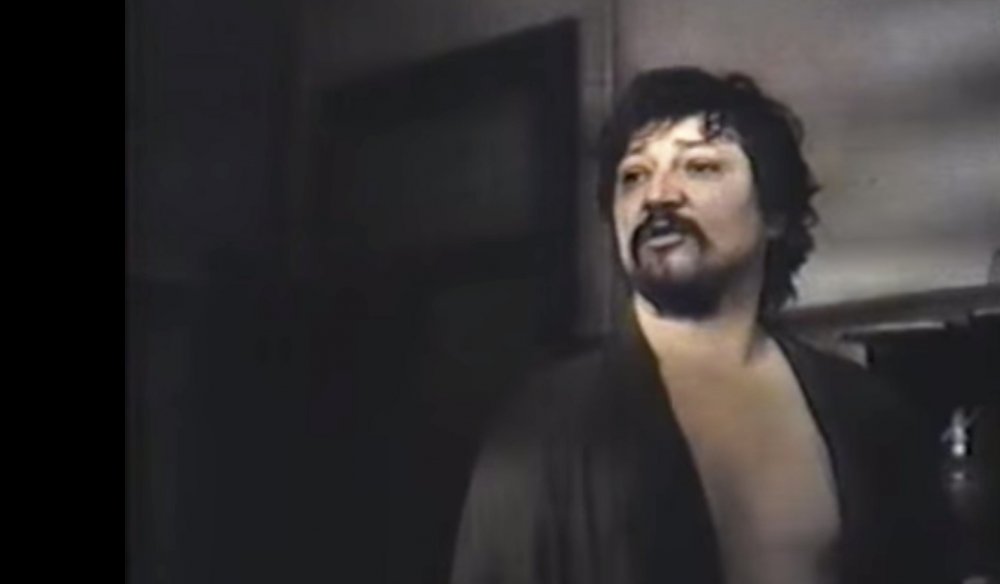 After nearly two decades of retirement, Sirk returned to filmmaking, briefly, through teaching at the Hochschule für Fernsehen und Film in Munich. With his students, he made three short films, the most striking of which is Bourbon Street Blues, an adaptation of Tennessee Williams’ one-act play The Lady of Larkspur. It’s a fitting full-stop to a magnificent career.

As in so much of Sirk’s work, the theme of losing sight of one’s dreams and trying to create a more palatable fantasy prevails. Annemarie Düringer plays a blowsy alcoholic harassed by her landlady, while Sirk’s cinematic heir, Rainer Werner Fassbinder himself, excels as a neighbour who comes to her defence (and whose true identity makes for a surprising final line).