In the year that saw stellar turns in Ad Astra and Once upon a Time… in Hollywood, we celebrate the golden boy with a stack of modern classics to his name. 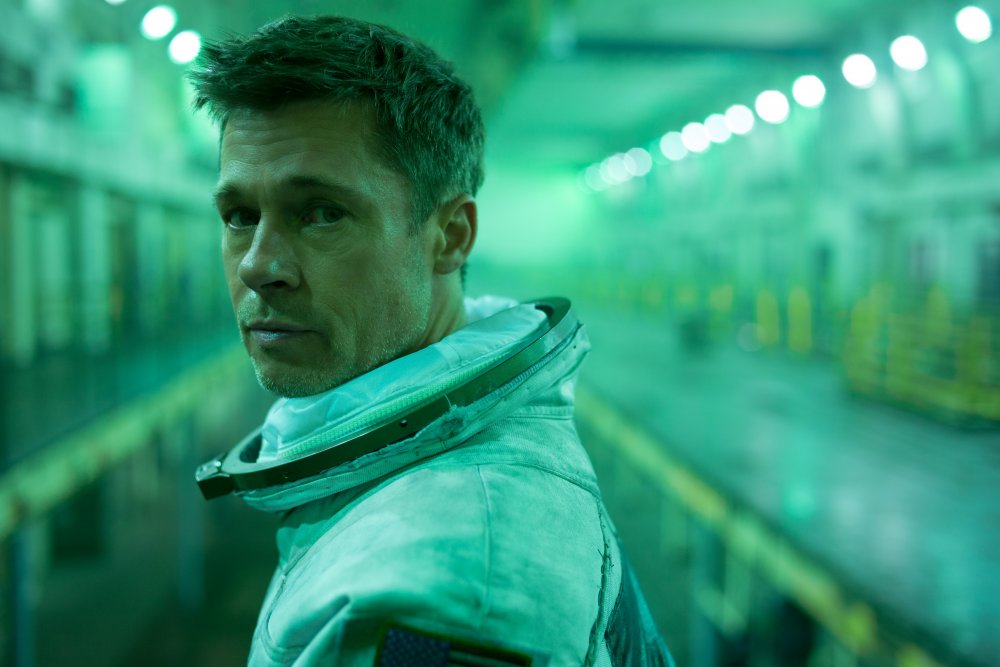 It would be a stretch to call Brad Pitt an unlikely movie star. The Oklahoma-born, Missouri-raised actor boasts both a natural Redfordian magnetism and the screen-friendly good looks to have twice earned him People magazine’s highest honour, the title of Sexiest Man Alive. And yet it’s also true that, for the best part of three decades, Pitt has enjoyed the kind of topline status usually reserved for blockbuster stars, despite his often making films, seemingly, for cineastes.

From his breakout feature, Thelma & Louise (1991), through even more box office-friendly propositions, including Se7en (1995), Inglourious Basterds (2009) and the Ocean’s films, to his two most recent efforts, Once upon a Time… in Hollywood and Ad Astra, Brad Pitt has made his name in vehicles that are auteur-driven, adult-oriented and, ultimately, critically praised.

Though Pitt has in his time been, in the characteristically understated words of Ad Astra director James Gray, “kind of an underrated actor”, Pitt’s move into producing in the second half of his career has been at least as impressive as his work as a performer. Founded in 2001, his production company Plan B has backed a slew of award-winning projects, including three best picture winners: The Departed (2006), 12 Years a Slave (2013) and Moonlight (2016).

While the tabloid fascination with Pitt’s private life has done much to help sustain his celebrity for close to 30 years, it has also served to divert attention away from what is an increasingly impressive body of work. 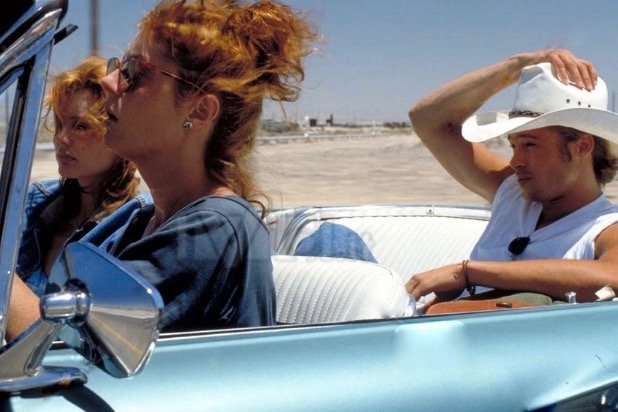 Providing a sexual awakening for Geena Davis’s Thelma as she makes a motel stop en route to Mexico with fugitive pal Louise (Susan Sarandon), Pitt’s largely shirtless turn as bank-robbing drifter JD in Ridley Scott’s radically female-gazing crime drama heralds the birth of a new cinematic heartthrob. Thelma & Louise was a godsend for Pitt’s career, introducing the young actor to the world not just as an object of desire, but as an icon of Americana, a charismatic gunslinger in blue jeans and a 10-gallon hat. Pitt only appears for a few minutes in his breakthrough role, but his movie star quality is already obvious, the performance as much a seduction of the audience as it is of Davis’s outlaw. 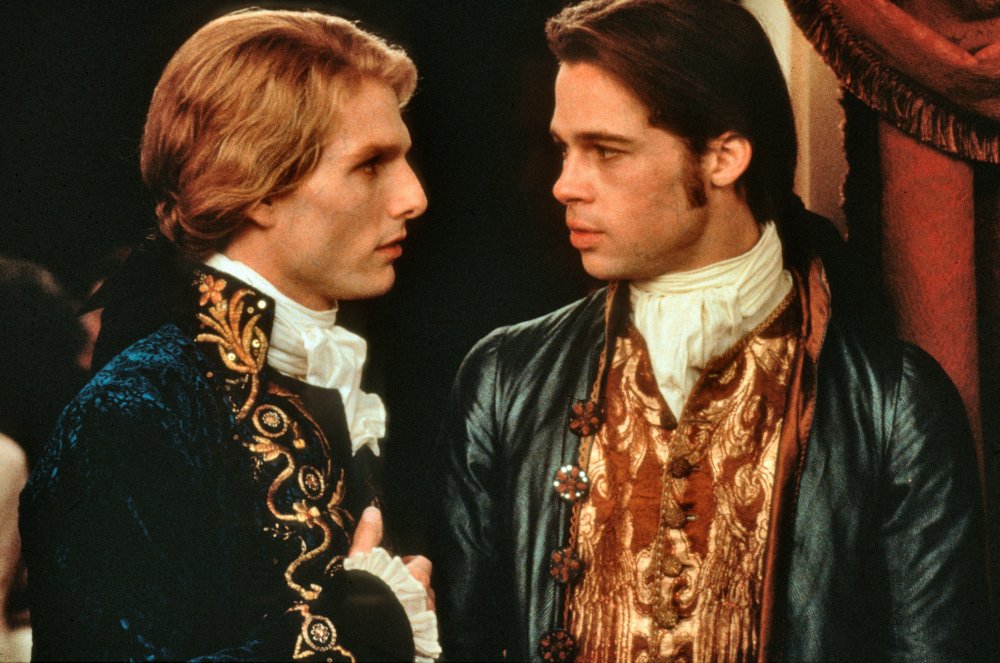 Post-Thelma, Pitt booked well-received supporting roles in period drama A River Runs through It (1992) and spree-killer thriller Kalifornia (1993), but it was as undead New Orleanian Louis du Lac in 1994’s Interview with the Vampire that he cemented his leading man status. Cast opposite a lascivious Tom Cruise, playing Louis’ proudly villainous vampire mentor, Pitt can’t help but pale in a more passive lead role. Contemporary reviews were unkind – some were almost as critical of Pitt’s involvement as Pitt, who had a “miserable” time shooting an adaptation that starved author Anne Rice’s antihero of colour – but the horror epic proved a hit and anointed Pitt a star all the same. 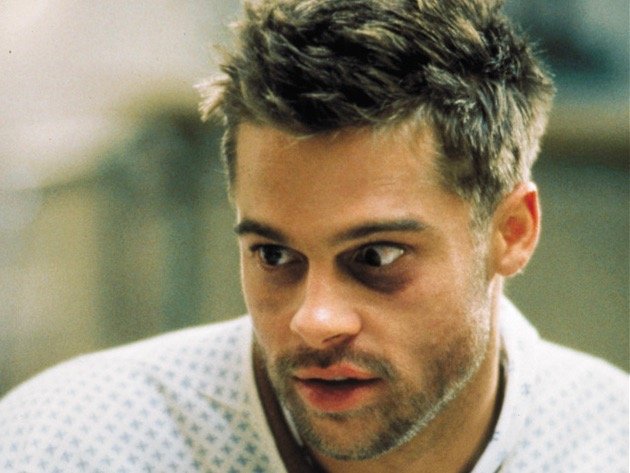 In the same year that he gave a cocksure hero turn for David Fincher, Pitt – motor-mouthed, twitchy, one beady eye always pointing in the wrong direction – channelled the shamanic spirit of Nicolas Cage for Terry Gilliam. Taking third fiddle behind Bruce Willis and Madeleine Stowe as mentally disturbed rich kid Jeffrey Goines, Pitt makes one of the better cases for his being more comfortable as a character actor than as the leading man in Gilliam’s temporally restless sci-fi. With the former Python still reined-in following a few too many ‘difficult’ productions, Pitt’s lively performance, one of the few elements of Twelve Monkeys that feels sincerely Gilliamesque, offers the truest sign that the director’s madcap vision remains intact. 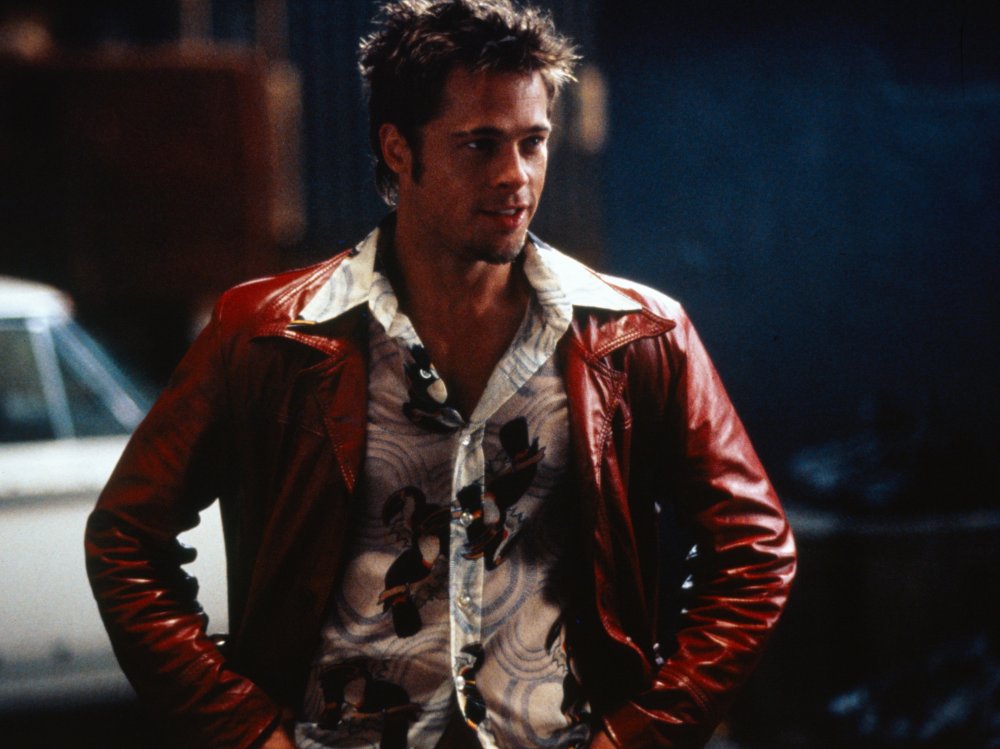 By 1999, Pitt’s global sex symbol status was so assured that David Fincher could cast him as the male ideal – and simultaneously use him to dismantle the very notion of such a thing. As Tyler Durden, the spiky-haired anarchic id to Edward Norton’s milquetoast narrator, Pitt has scarcely been at once so desirable and repellent, the initial anti-authoritarian cool curdling into something more frightening as his chiselled revolutionary transforms an underground society into a terrorist cell of Gen X males raging against their own boredom. In his second film excavating the actor’s dark side after Se7en, Fincher tests how far Pitt can carry an audience on his charisma alone, and creates a much-debated cinematic icon in the process. 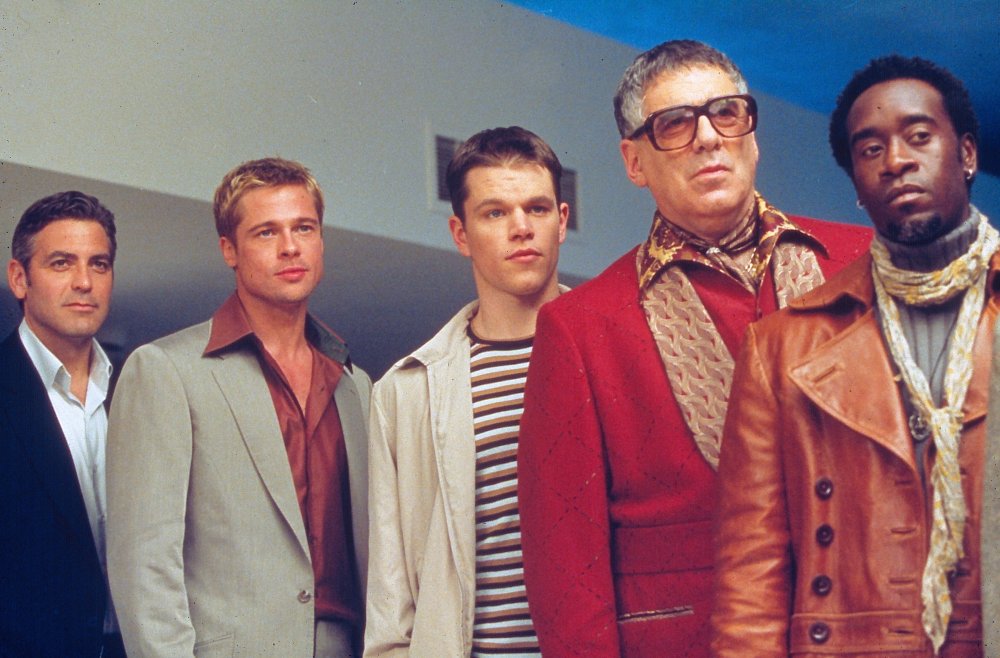 Playing Deano to George Clooney’s Frank Sinatra, Pitt’s performance in Steven Soderbergh’s relentlessly glamorous remake of Rat Pack heist movie Ocean’s 11 (1960) is perhaps his defining one as a movie star. The romance in the film is ostensibly between Clooney’s bank robber Danny Ocean and his ex-wife Tess, played by Julia Roberts, but the chemistry truly belongs to Ocean and sidekick Rusty, played with casual insouciance by a constantly snacking Pitt, giving the kind of playful, assuredly laidback turn only a comfortably established star with nothing to prove could. 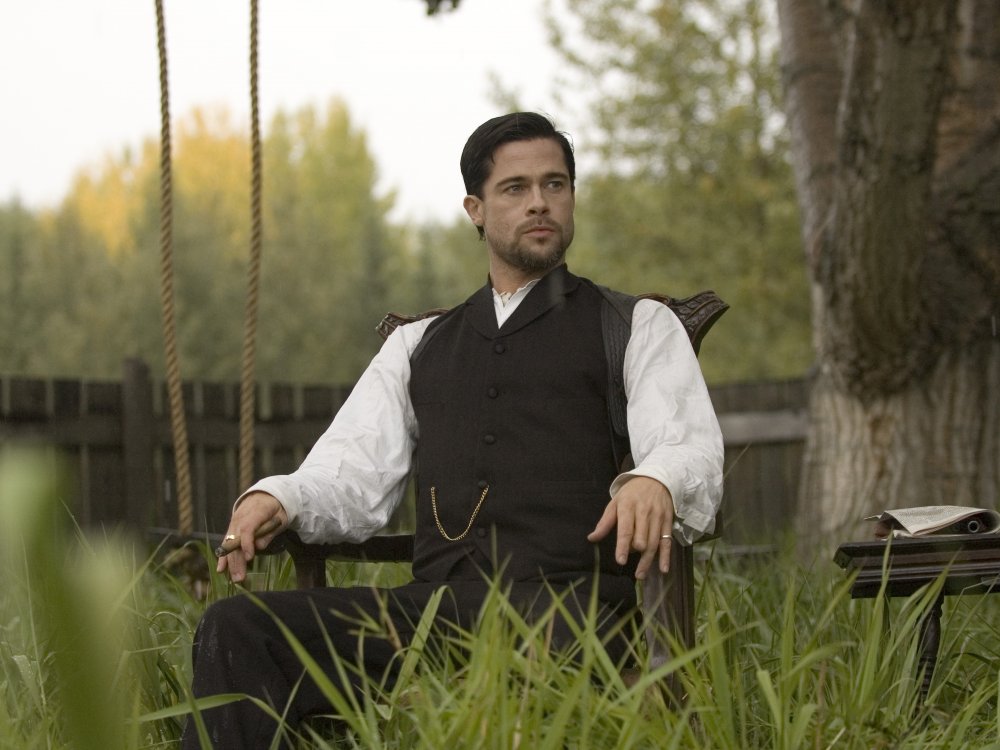 If early career notices had dismissed some of Pitt’s attempts at conveying depth, Andrew Dominik’s sombre revisionist western provided the now 42-year-old actor with an opportunity to display new wisdom. The film offers up a bountiful feast of character acting – the excellent supporting cast includes Casey Affleck, Sam Rockwell, Paul Schneider and Jeremy Renner in a pre-Marvel turn – but all orbit around a towering Jesse James. Pitt won the best actor award at the Venice Film Festival for his myth-busting performance, which recasts one of America’s first true celebrities as a suicidal paranoiac whose bipolarity may find him cackling one minute and choking on tears the next. 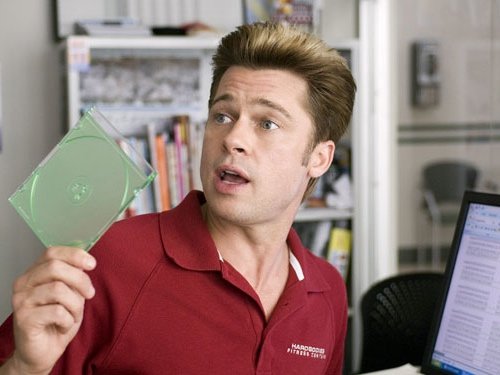 After Assassination and the dour drama of Alejandro González Iñárritu’s Babel (2006), Pitt evidently welcomed the irreverent release of a Coens comedy. He’s the MVP of the brothers’ most pleasurably aimless work, a spy thriller spoof that places Pitt’s airheaded Chad Feldheimer, an almost inconceivably blank personal trainer, at the centre of an overblown Washington ‘conspiracy’. Where the likes of George Clooney and a perpetually furious John Malkovich play the Coens’ droll humour largely straight, Pitt draws Chad broad, relishing the Coens’ physical humour and circuitous dialogue. Pitt’s scene with Ocean’s sparring pal Clooney, playing his own monumental dunce, is one of the great comic setpieces of the decade. 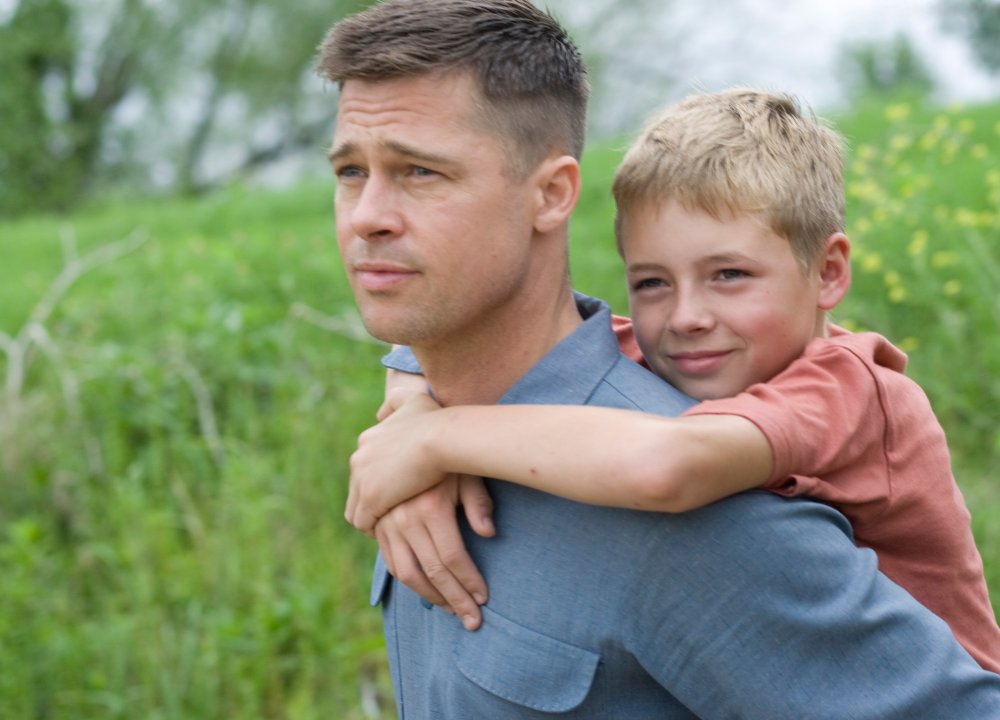 Taking on a role originally earmarked for Heath Ledger, The Tree of Life casts Pitt as Mr O’Brien, the quick-tempered disciplinarian patriarch of a white-collar Texas family circa the 1950s. Terrence Malick’s Palme d’Or-winning blend of suburban drama and phantasmagorical Earth story is typically a rapturous collage of images rather than an actors’ film, but Pitt still manages to paint an empathetically complex portrait of a character based on Malick’s own father. A bully in the eyes of his young sons, O’Brien is played by an increasingly forlorn Pitt like the homecoming king who never got over his early promise, now trying to toughen his boys up for a life that has so far only disappointed him. 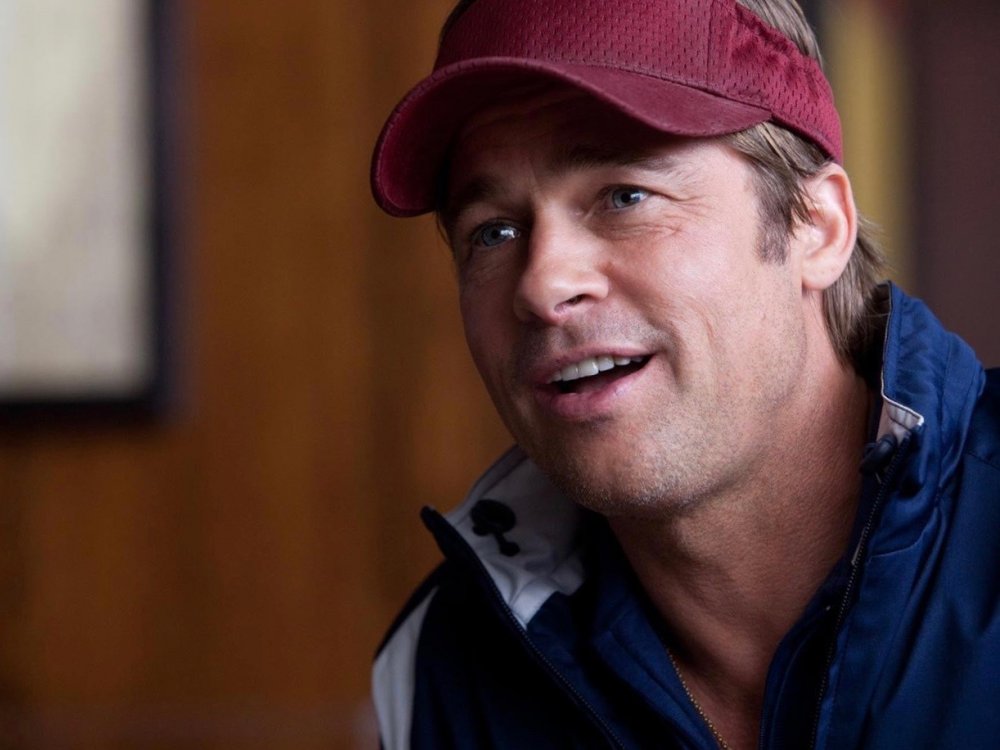 Recovering from a rocky production that saw original director Steven Soderbergh fired at the 11th hour, 2011’s riveting true-to-life baseball drama Moneyball went on to be nominated for six Academy Awards, including one for best actor for Pitt. Directed to his most affecting performance by replacement director Bennett Miller, Pitt cuts a lonely figure as Oakland Athletics manager Billy Beane. Bringing a quiet melancholy to his scenes as a middle-aged single father still driven by his own failure as a young ball player, Pitt is the soul of a sports movie that’s all about reducing people to statistics. 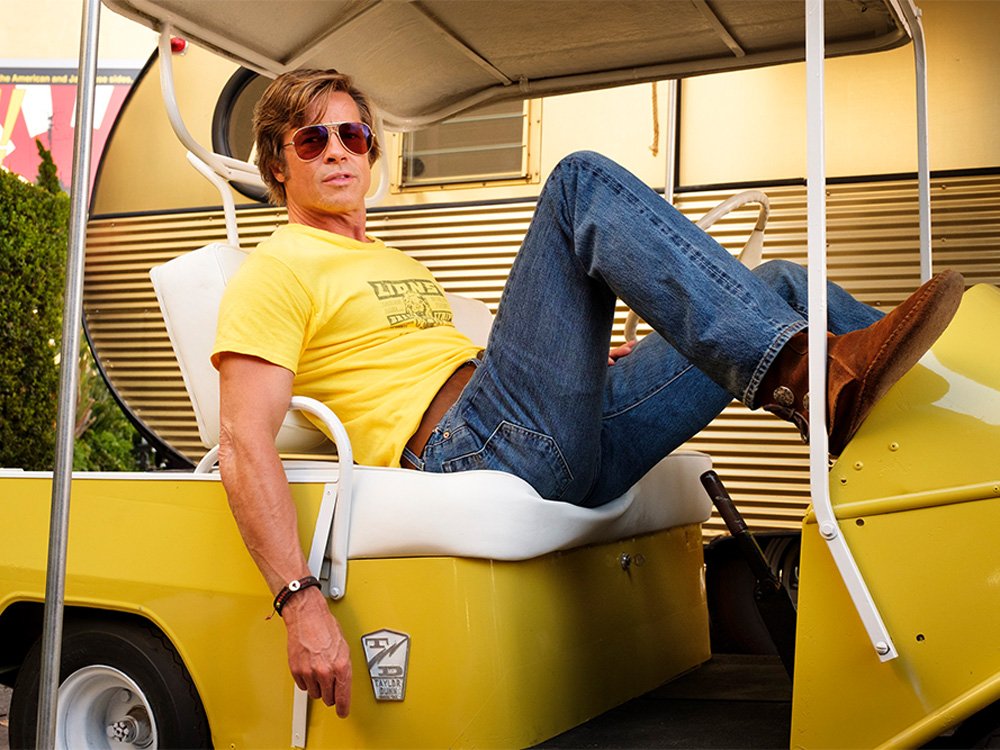 In Quentin Tarantino’s elegy for Tinseltown in the immediate pre-Manson era, Pitt plays ageing stuntman Cliff Booth like a career recap. Pitt’s third Tarantino character – he also cameoed as stoner Floyd in the Tarantino-penned True Romance (1993) and starred as cartoonishly abrasive Nazi-hunter Lieutenant Aldo Raine in Inglourious Basterds (2009) – allows the actor an opportunity to reflect. Tarantino’s camera adores Pitt, and all the familiar screen personas that he gets to revive here: the outlaw, the washboard sex symbol and, in this dark fairytale’s acid-dipped final act, both action hero and comedian. A summation of his career so far, the role also finds Pitt, following several years spent stepping back into ensemble roles, revitalised.