In 2018 British TV told stories of our nation that were ancient and unfolding, heart-warming and crushingly sad. Here the BFI curatorial team pick their favourite terrestrial TV shows of the year. 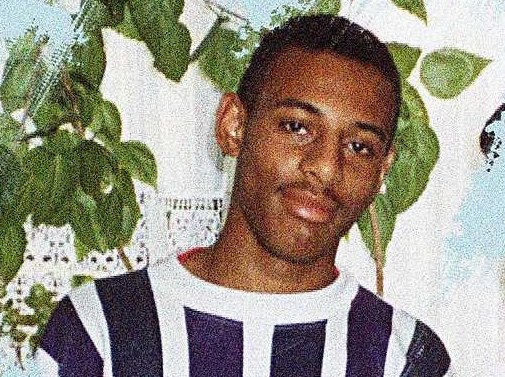 Stephen: The Murder that Changed a Nation (2018)

2018 was the year broadcast bit back.

Massive live events, including the royal wedding and the world cup, garnered millions of viewers, and primetime dramas like Bodyguard and A Very English Scandal dominated watercooler chat. Even television stalwart Doctor Who was reinvigorated for a new audience, with the help of Chris Chibnall and Jodie Whittaker.

Yet the smell of change is still in the air(waves). Channel 5 ended an era and said goodbye to Big Brother. Meanwhile, Netflix and Amazon opened commissioning hubs in London, signalling more competition for terrestrial television next year.

Overall, 2018 was littered with original, provocative programming across all platforms. Here, BFI curators select their cream of the crop of new British telly from the past year. 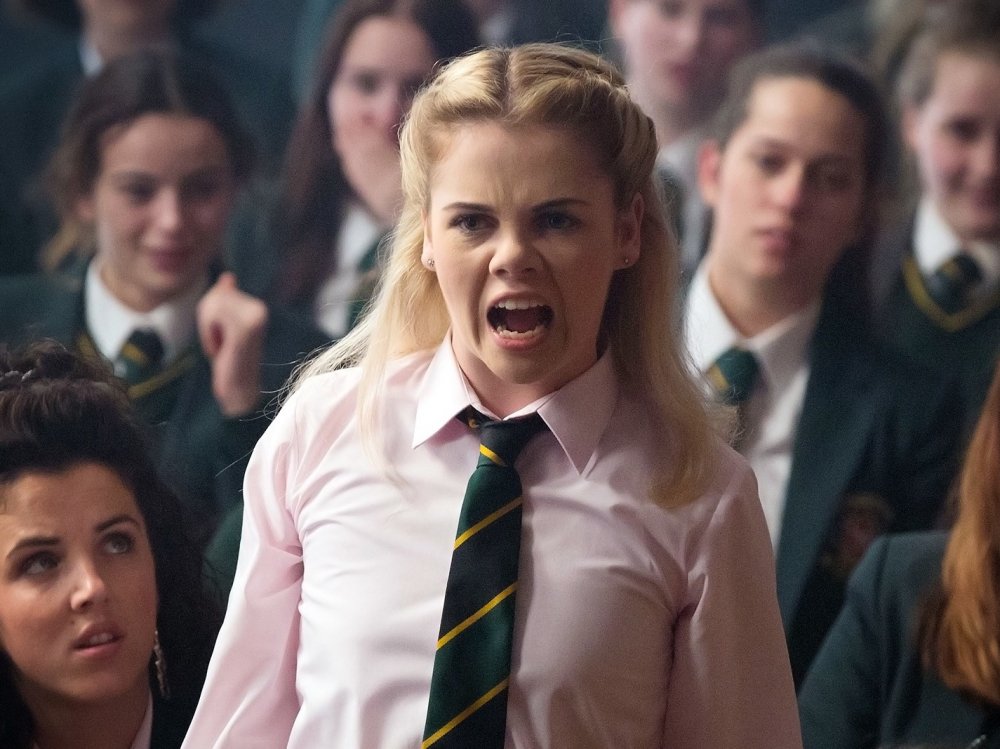 The funniest place to be in 2018 was Derry in the early 1990s. Lisa McGee’s Channel 4 sitcom focused on four teenage Derry girls (and one wee English fella) getting to grips with crushes, scary nuns and annoying parents against the backdrop of the Troubles. Northern Irish comedy is rarely given the chance to shine beyond regional broadcasting, and it was a joy to see Derry Girls not only breaking records for viewing figures in Northern Ireland but also becoming Channel 4’s most popular sitcom in years.

McGee’s blend of nostalgia, awkward situations and truly artful swearing was brought to life by a uniformly brilliant cast. Alongside the many, many laughs in the series there was a depth of feeling for the characters, particularly in the final episode, and the bittersweet tone rang true for anyone who grew up in Northern Ireland in this period. All in all, it was pure class. 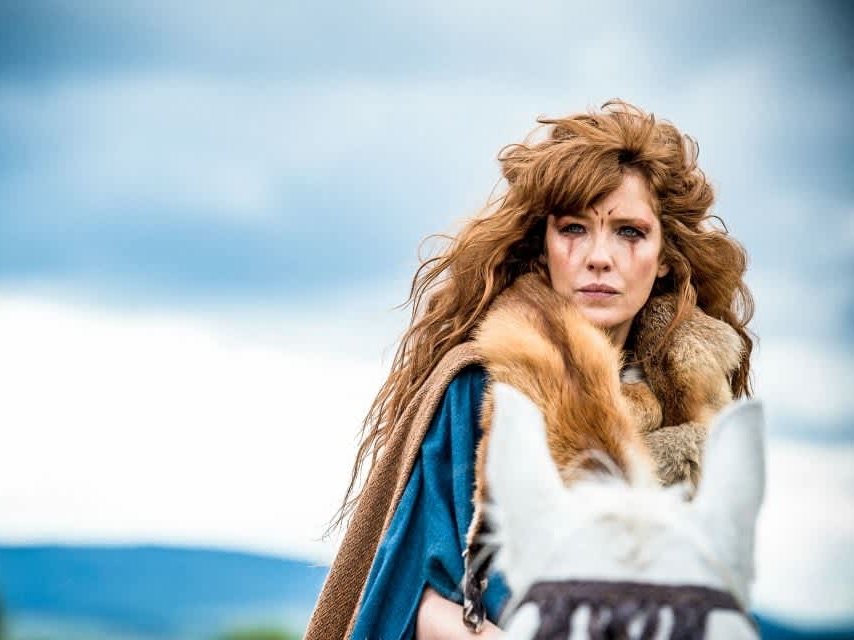 Mythmaking trumped historical exactitude in Jez Butterworth’s Britannia, which conjured up an old Albion in which magic and ancient gods are as real and potent as the mud and the mushrooms. This nine-part Romans-in-Britain saga was unconventional history but heady, resonant storytelling.

This was a land divided against itself, with the warring Canti and Regni – respectively led by Ian McDiarmid’s King Pellenor and Zoë Wanamaker’s very Boudicca-ish Queen Antedia – watched over by sinister, skeletal druid high-priest Veran (Mackenzie Crook), with would-be conqueror Aulus Plautius (David Morrissey) drawn ever-deeper into the strangeness.

“We’re broadcasting on a frequency that some people clearly won’t get,” confessed Butterworth. Those expecting a Game of Thrones retread might have left frustrated. But for those in phase with its reference points – ancient Celtic folklore, paganism, druidism and psychedelics; The Eagle of the Ninth, Alan Garner and the weirder shores of 70s kids’ TV (sprig of Catweazle, feather of Raven) – Butterworth’s lysergic drama was unsettling, witty and intoxicatingly mysterious.

Stephen: The Murder That Changed a Nation (BBC One) 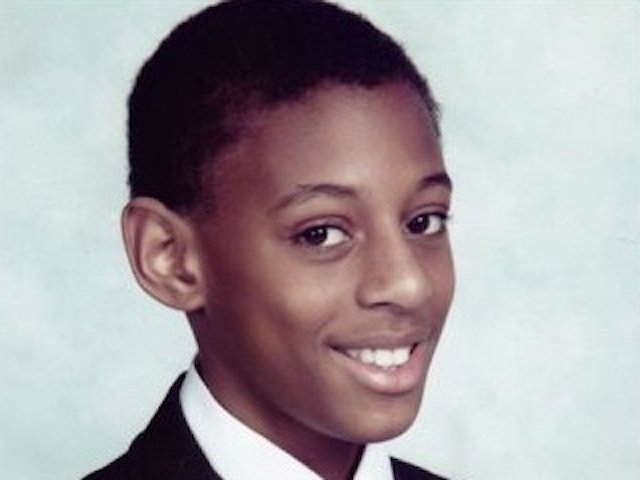 The killing of Stephen Lawrence unfolded with terrible speed – a blur of horror on an ordinary evening in April 1993, a teenage boy waiting for a bus home in south-east London, set upon by a gang of violent racists. Twenty-five years later, those terrible moments radiated from the centre of this scalding three-part documentary, produced by Asif Kapadia.

The approach was at once big-picture and intricate, Kapadia and director James Rogan patiently uncovering the long, half-forgotten London history that prefaced the murder – the New Cross fire of 1981, for instance, in which 13 black lives were lost in unexplained circumstances. Then came the scrutiny of the institutional forces swirling around the case: police, press and politicians. The result bore witness to the unique power of television – programme-making that asked if the Britain of 2018 was still, at heart, the same Britain in which Stephen was killed.

A Passage to Britain (BBC Two) 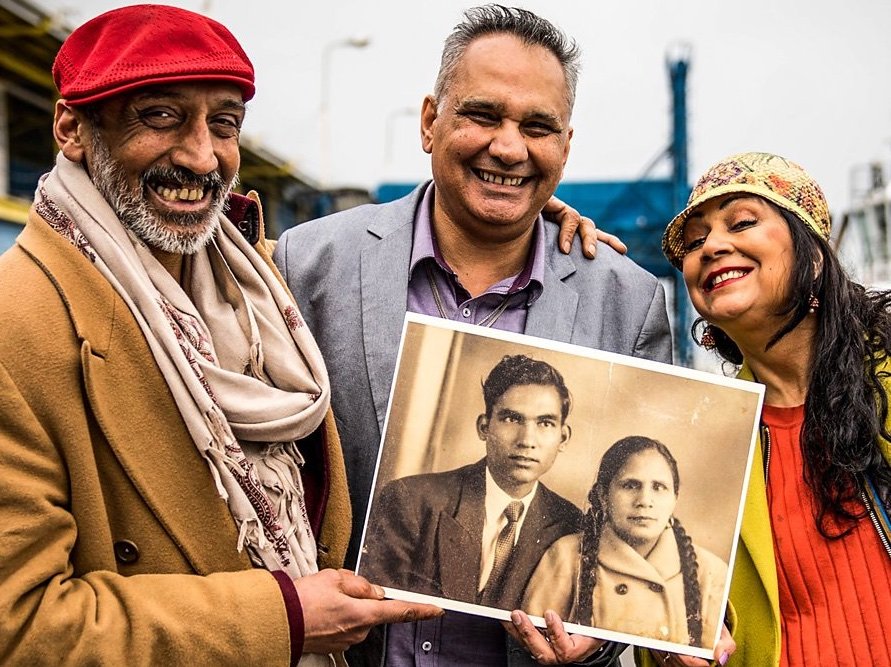 Exploring the lives of passengers on three ships travelling from India to the UK in the 1930s-50s, historian Dr Yasmin Khan guided us through one of the richest popular history programmes I have seen for a long time. The highlight of the BBC’s Big British Asian Summer season, this was a rewardingly complex and warmly human exploration of migration and identity – a Who Do You Think You Are? with bigger ambitions.

At the heart of the three programmes were interviews with the original passengers or their descendants, using them to explore not so much the journey itself, but the arrival in Britain. Here were stories of segregation in British factories, exposés of the lengths the authorities were prepared to go to antagonise new South Asian arrivals and the shock of Anglo-Indians on discovering that they were not quite as Anglo as they had previously thought. This was compelling revisionist history – and far more potent than discovering that Danny Dyer is a descendant of King Edward III. 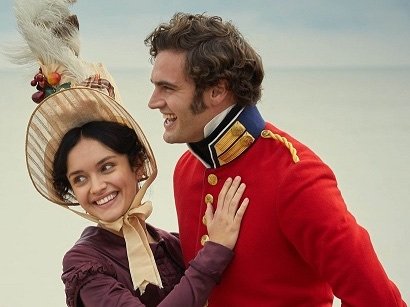 Gwyneth Hughes’ electric adaptation of Vanity Fair had the misfortune to be scheduled against the audience-gobbling Bodyguard. However, those who tuned in were rewarded with sumptuous visuals and delectable, addictive drama. The controversial modern music that bookended each episode masked a largely faithful retelling of William Makepeace Thackeray’s social satire of young people navigating high society as the Napoleonic wars begin. The world of this Vanity Fair was a beguiling dreamscape of pastel blues and pinks – punctuated with the bright reds of military uniforms – and clever scripting delivered the theatrics at a breathless pace.

Olivia Cooke’s Becky Sharp was pitch-perfect, embodying all the complexities and contradictions of the famous antihero. Wily yet naive, optimistic yet cynical, Becky schemes her way up the social ladder with wit, winks and eyerolls – often delivered to camera. The scene-stealing supporting cast all dazzled, but it was Cooke who shone brightest, and our Sunday evenings are duller without her. 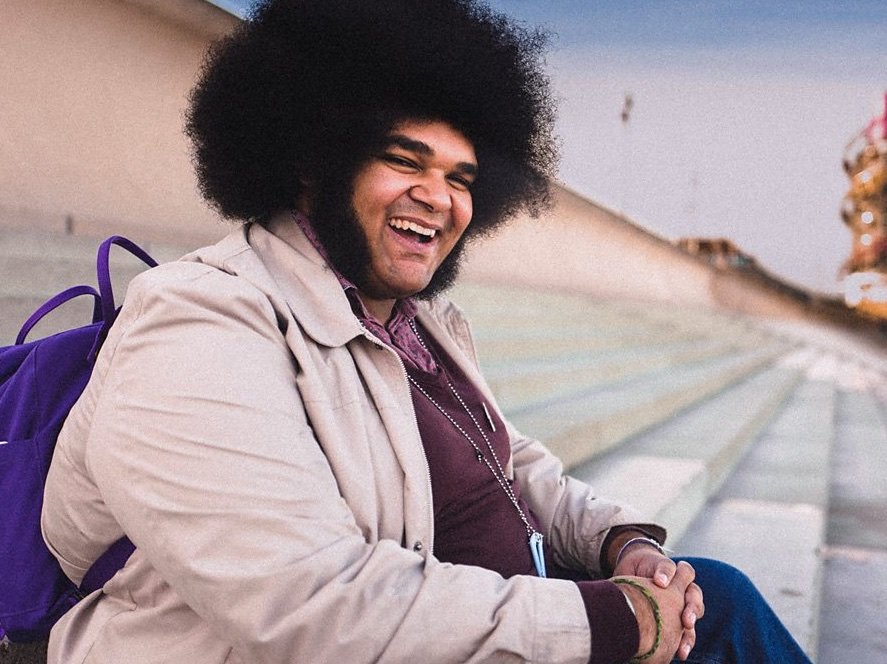 Redcar is a seaside, Teesside town with four food banks but only one Costa Coffee. “I guess that says a lot,” summates Madison Cooper, our cheery local guide, in the documentary series The Mighty Redcar. Director Dan Dewsbury lived above the local chip shop for the year-long shoot, getting to know the community. As a result, this “sort-of real-life soap-opera” presented an intimate and authentic slice of life in Britain’s rustbelt. 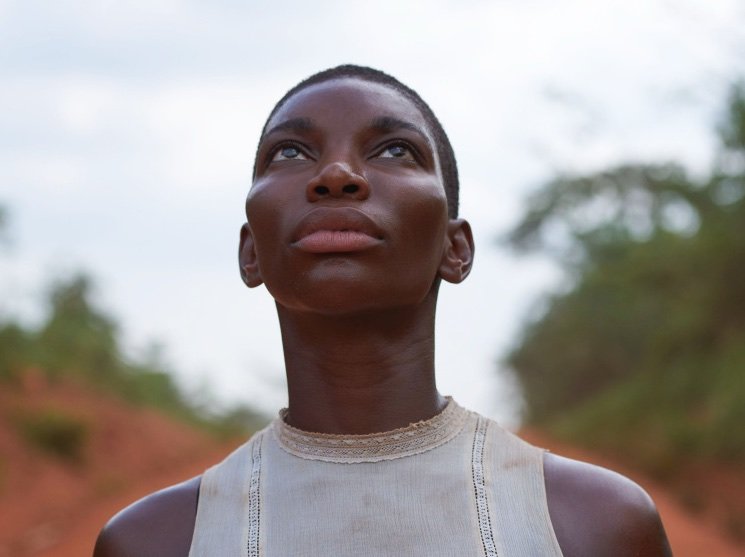 This BBC/Netflix epic eight-parter was the latest offering from writer-producer-director Hugo Blick, cementing his status as TV drama’s auteur du jour. Blick audaciously tackled the legacy of the 1994 Rwandan genocide and the shadowy prosecution of war crimes at the International Criminal Court.

Leading a cast of warlords, UN soldiers, lawyers and NGO veterans was Michaela Coel, breakthrough star of Chewing Gum and recent feature Been So Long. Coel was a revelation as legal investigator Kate Ashby, rescued from Rwanda as a child and battling her own psychological demons. John Goodman was a genial, occasionally unsettling presence as her boss, while Blick himself appeared as a deliciously slimy, amoral rival.

Opening to the portentous tones of Leonard Cohen, Black Earth Rising risked collapsing under its own self-importance. Thankfully, Blick injected a dose of blackly comic eccentricity, not seen since his lower-key early work (Marion and Geoff, Sensitive Skin). A rarely-matched roster of talent played second fiddle: this was Coel’s show, and a richly deserved triumph. 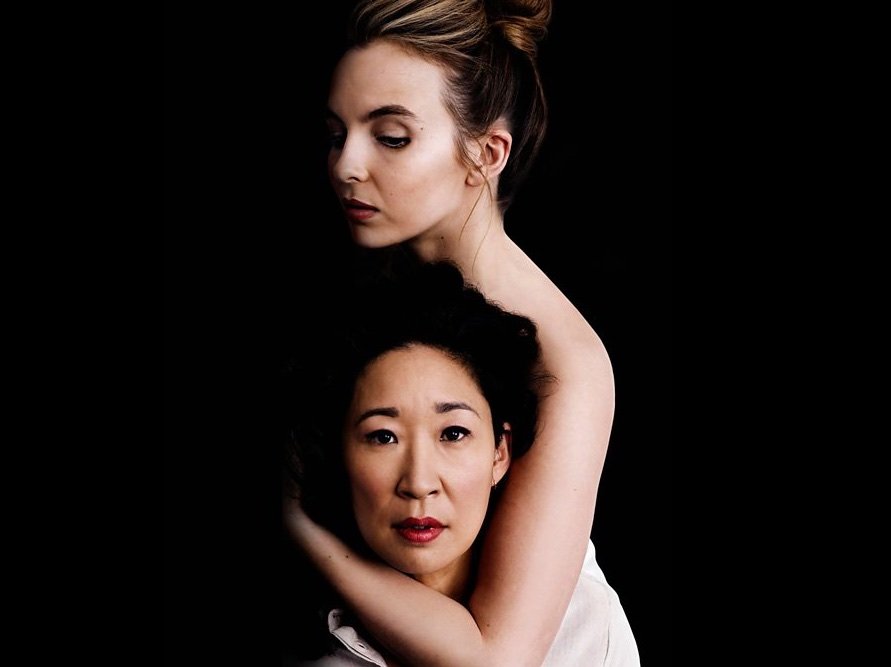 The season’s best trailer had me hooked from the start. An anxious-looking secret service operative (Eve, played by Sandra Oh) tells an assassin, “you’re a psychopath”. The assassin (Villanelle, played by Jodie Comer) snaps back, “You should never tell a psychopath they are a psychopath. It upsets them.” “And are you upset?” asks Eve, at which the beautiful Russian girl turns down the corners of her mouth, making a tragic clown face, and nods slowly.

This paradox – the self-aware psycho killer – sets the tone. Killing Eve has a bit of le Carré – the shabby realism of The Circus – mixed with the stylised international crime-world and female panache of Modesty Blaise. The characters are always unpredictable – the ruthless but sexy character of Villanelle in particular is the stuff of obsession – and Phoebe Waller-Bridge’s script wrong-footed our expectations at every turn. An instant classic. 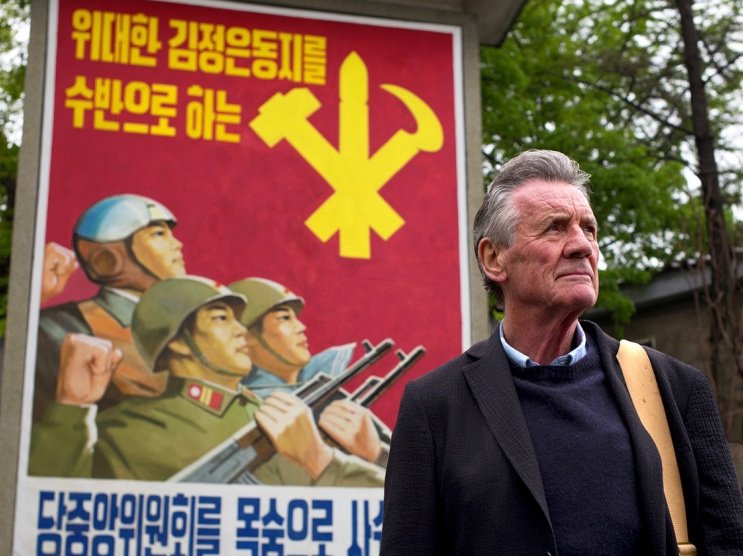 Famously genial Michael Palin goes to notoriously repressive North Korea – a compelling pitch for a documentary, and a brave one for Channel 5 to commission and for ITN to produce. Few camera crews have ventured into the totalitarian state, and with a team of minders escorting Palin throughout, he took a largely observational rather than investigative approach. And it proved to be gripping viewing.

Palin struck up a particular friendship with one of his guides, a charming young woman called Li So Yang. His characteristically affable manner was combined with a keen awareness of despotism as he ventured to suggest the possibility of criticising the supreme leaders, among other politely probing questions.

The tour of urban and rural North Korea takes in plenty of memorable moments – from the tipsy May Day revellers to the teacher alarmed by Palin’s gentle antics in her classroom. It’s an uncommon treat to share with Palin “the most revealing journey of my life”.

This new series from multi-talented writer-director-actor Desiree Akhavan deftly sidestepped the usual clichés about bisexuality. Focusing on the breakup of east London power couple Leila (Akhavan) and Sadie (Maxine Peake), the show follows Leila as she discovers her own romantic identity.

The oft-forgotten letter in LGBT, bisexuals are seen to straddle two worlds while fitting into neither, a notion emphasised by Leila’s friends, Deniz and Gabe. Deniz (scene-stealing newcomer Saskia Chana) is a witty lesbian who lands the show’s funniest and most acerbic lines, whereas the somewhat unlikeable Gabe (Brian Gleeson) is the stereotypical intellectual straight male, with the double-act working effectively to cast the hetero world as ‘other’.

With a clear tonal influence from the New York comedy scene, the series marries the awkward cool of Frances Ha with Fleabag’s frank commentary on female desire. Topped with complex and engaging characterisation, The Bisexual is a smart and wry take on the 30-something queer scene.