Our TV curators have been glued to their sets all year, making calls on which programmes to select for preservation in the BFI National Archive. This top 10 represents the cream of 2015’s crop. 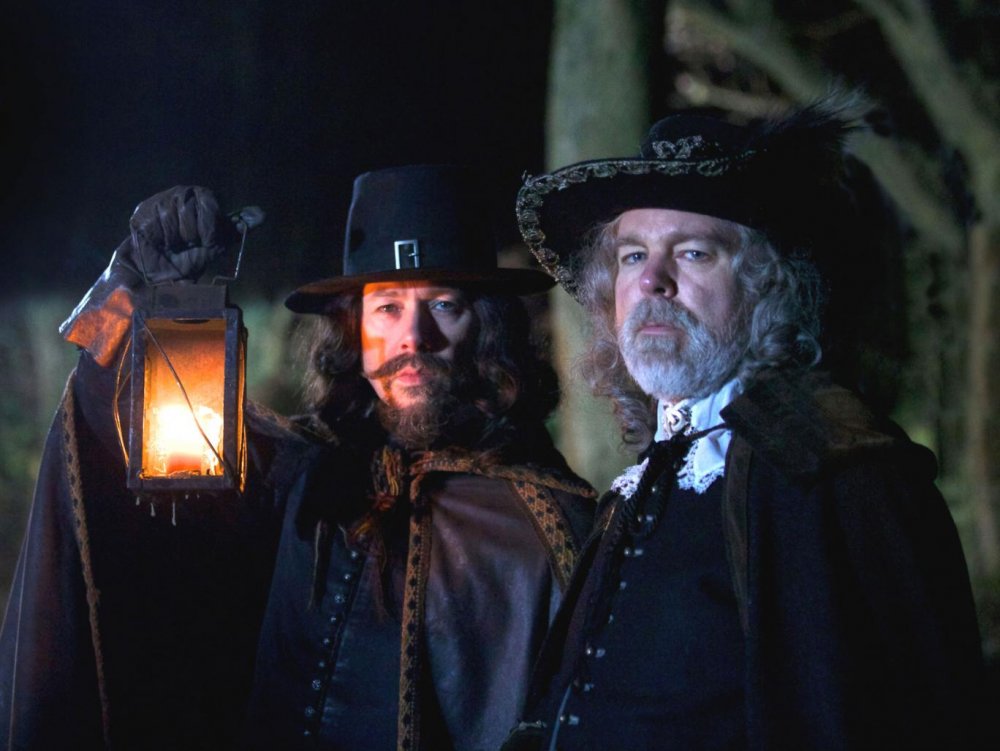 This is the time of year when TV critics everywhere are putting together their top 10 lists and doing their best to cause argument and outrage. This one is a bit different, as it has already been subject to argument, being a joint list from the five-member team of television curators at the BFI National Archive, whose function it is to select both outstanding and exemplary titles for inclusion in the national collection of television programmes. All the programmes here are British (though we have added a few personal choices from elsewhere, too) and everything mentioned, not just the top 10, was selected for preservation in the archive, along with much else besides. 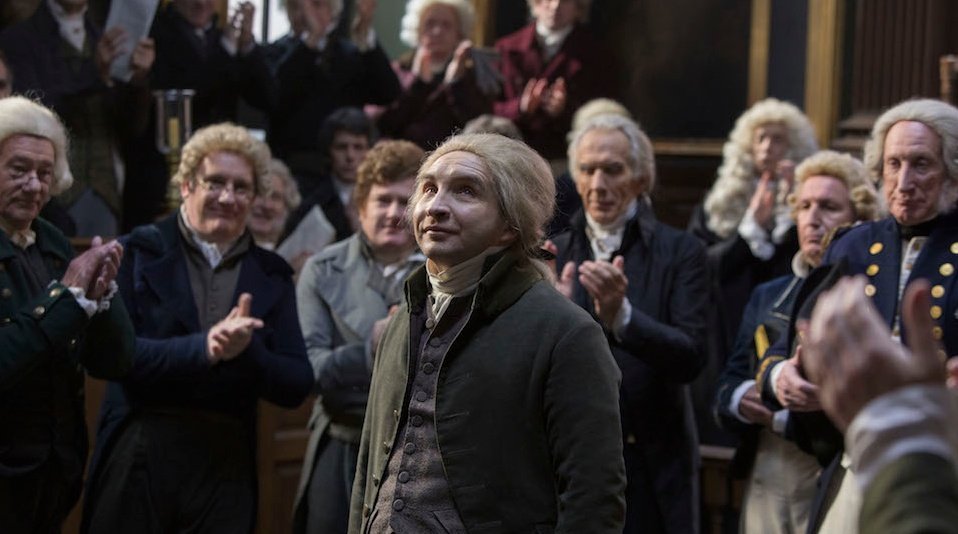 An outstanding fantasy drama, with stunning visuals and a superb cast, this adaptation of Susanna Clarke’s novel about the return of magic to England was a treat from start to finish. The viewer was drawn inexorably into an increasingly dark story that wove dreams and history together to create a rich tale of love, death, war and strange fairy magic. This is a drama to savour, to pause and rewind, to simply hold an image on screen, and ultimately one which is hard to forget. 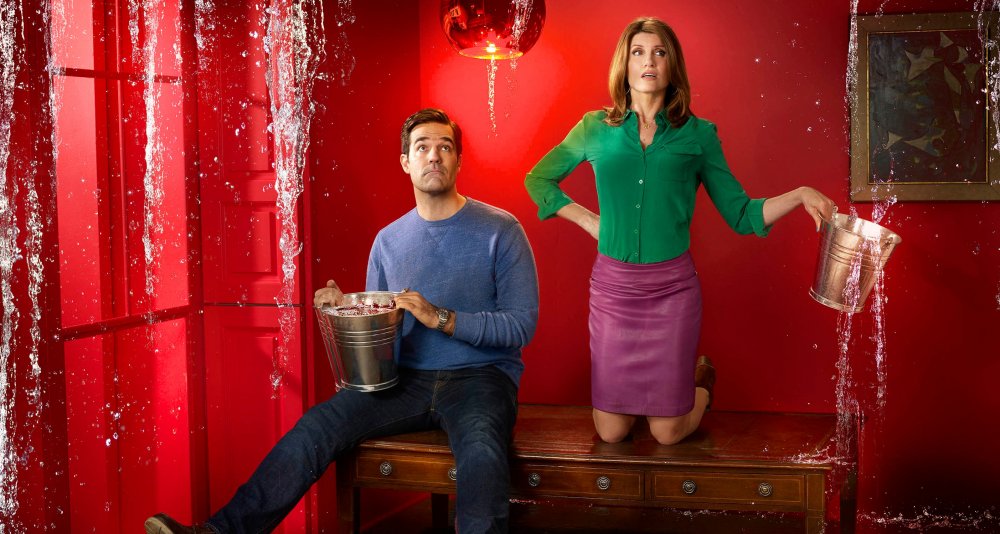 Over two series this year, we have been treated to Sharon Horgan and Rob Delaney’s wonderful and excruciating depiction of the highs and lows of an adult relationship; a depiction that has left so little to the imagination, both in words and actions, that it should come with the warning sticker: “too much information”.

Comedy doesn’t get much more raw and unflinchingly honest than this (actually, not many dramas do). The hallmark may be its outrageousness, but it would be nothing without the strong love story that lies at its heart. A love strong enough to make you believe these two can survive as a couple, despite their shortcomings, bickering and full-blown arguments. Rarely do we see anything so over-the-top that still feels so real.

All Aboard: The Canal Trip (BBC4) 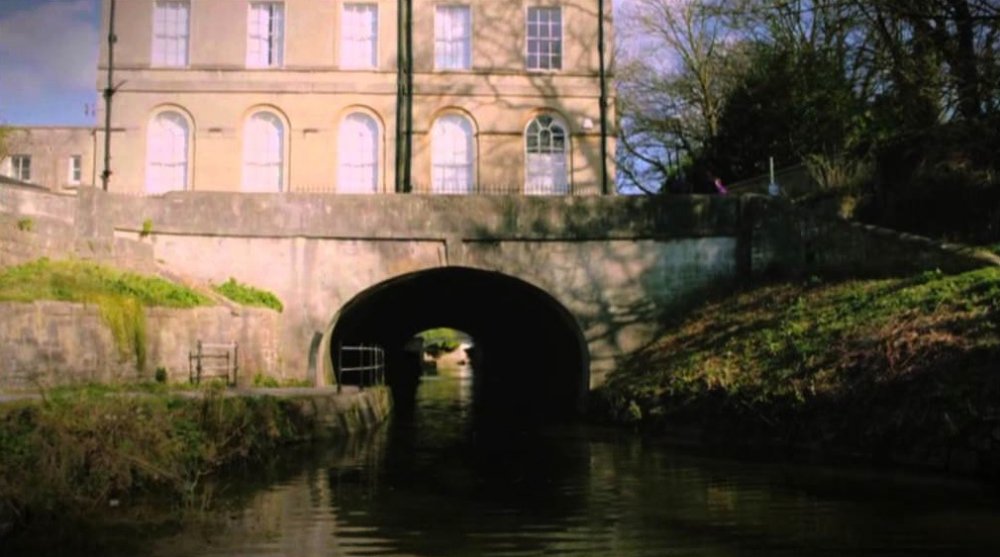 Canals have been a surprisingly popular subject on all the main channels this year. In May, BBC Four dedicated two hours to a leisurely journey along the Kennet and Avon Canal. What made this exceptional television was that this was a journey in real time, with no commentary or editing, just the hypnotic images from the fixed camera, punctuated by occasional snippets of informational text rippling on the surface of the water. Not quite in the epic timescale of Norwegian ‘slow TV’, but part of a fascinating season inspired by it. 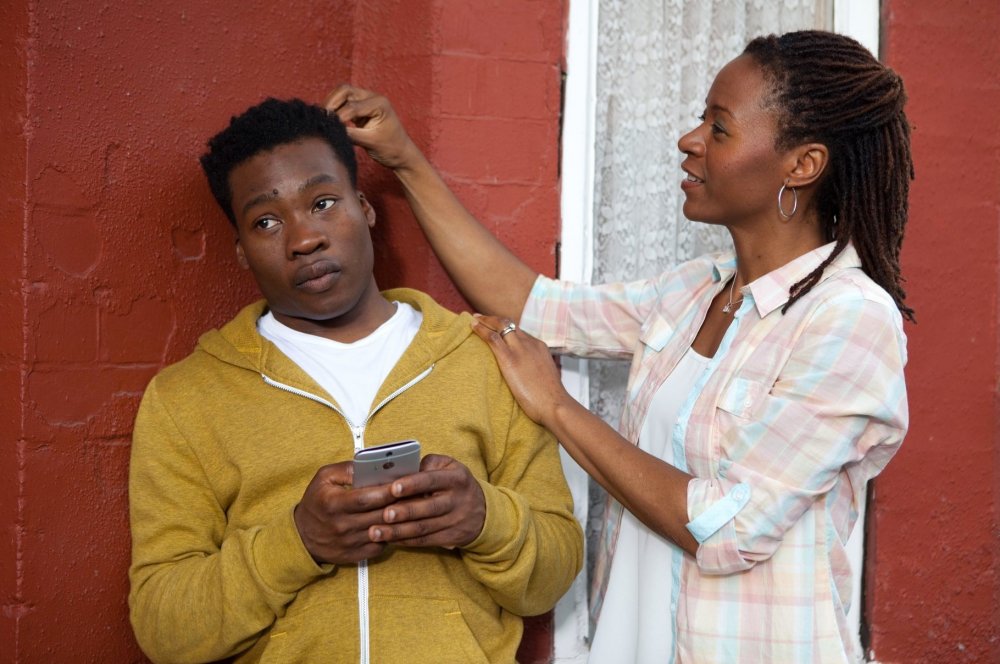 The cheeky junior partner to Channel 4 series Cucumber (the sixth episode of which was a devastating masterpiece), Banana elaborated on the lives of supporting characters, taking them off on wild trysts and exposing their secrets in funny and tender ways. Within eight stories, particular episodes shone brightly. Episode two made Scotty (Letitia Wright), the sweetest character in the Cucumber universe, an unlikely stalker in Russell T. Davies’ ode to the power of unrequited love. 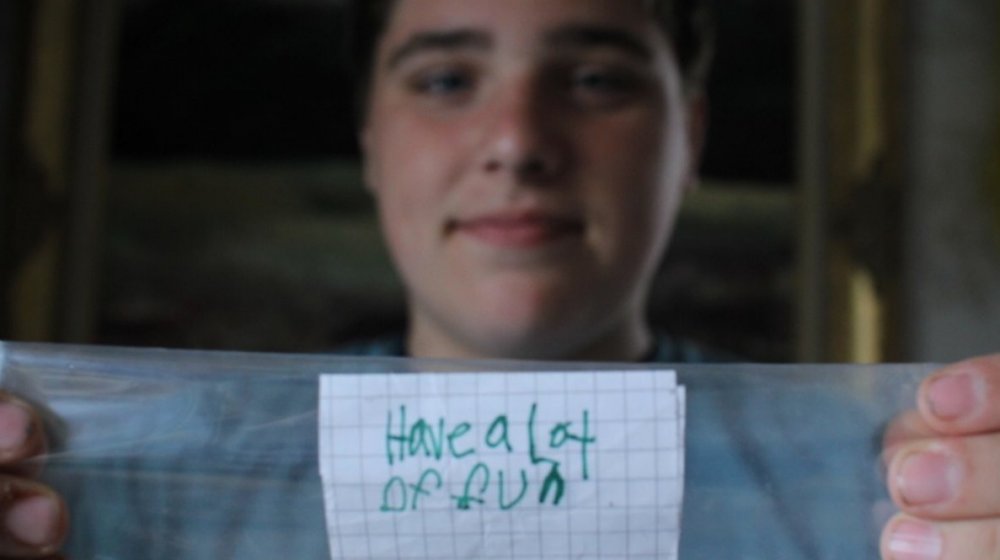 Jezza Neumann’s latest piece confirms his place among our very best documentary makers and once again features some utterly remarkable interviews with children. Filmed over two years, the documentary explores the grieving and recovery process following the devastating killings of children and teachers at a Connecticut elementary school, but also has plenty to say about American attitudes to the gun control issue that simply won’t go away.

Deciding between this and Storyville: India’s Daughter (BBC4), Leslee Udwin’s highly impactful report on Indian society’s attitude to the notorious Delhi rape case, was probably the most difficult choice we made and one which cannot be fully explained. 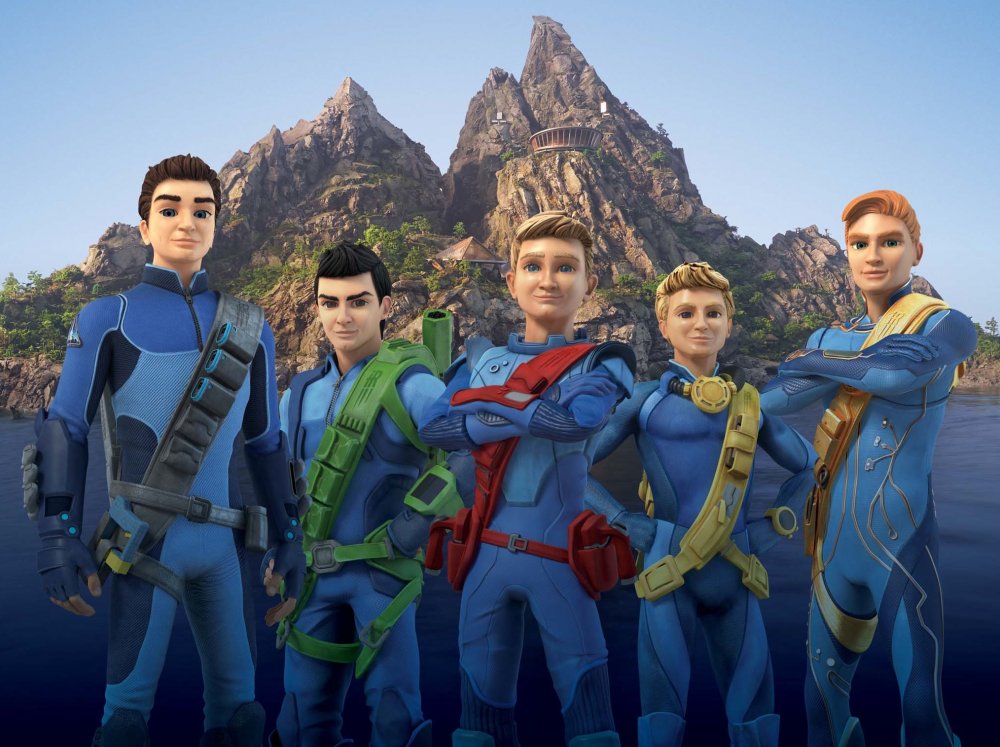 A big year for the reboot of some of the 20th century’s favourite children’s shows saw the reappearance in high-definition widescreen of The Clangers (CBeebies), Dangermouse (CBBC), Teletubbies (CBeebies) and several others. Thunderbirds Are Go has retained the look and the spirit, though not the running time, of Gerry and Sylvia Anderson’s heroic, action-packed exploits of the Tracy family and is a winning addition to CITV’s Saturday morning line-up. Freed from the restrictions of puppetry, the computer animated version has brought the Thunderbirds to a brand new audience. 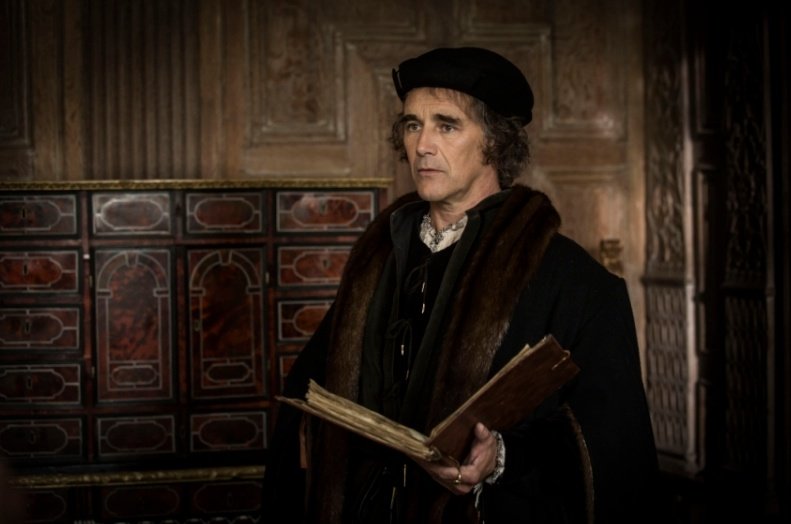 AKA the mesmerising eyes of Mark Rylance. This adroit adaptation of Hilary Mantel’s award-winning novels, written by Peter Straughan and directed by Peter Kosminsky, was highly anticipated, but prestige is not always a guarantee of vital drama, and Wolf Hall succeeded in building a compelling world in which familiar figures and timeworn events were urgent once more.

The machinations of the royal court were scarcely illuminated, occurring as they did in shadows and flickering candlelight, but single glances and raised eyebrows said more than many speeches could. Claire Foy’s Anne Boleyn was haughty, cold and entirely sympathetic, but the series was grounded in Rylance’s quietly riveting performance, accompanied by Debbie Wiseman’s indispensably mournful score. It also featured, as Variety TV critic Maureen Ryan has pointed out, a very fine array of hats. 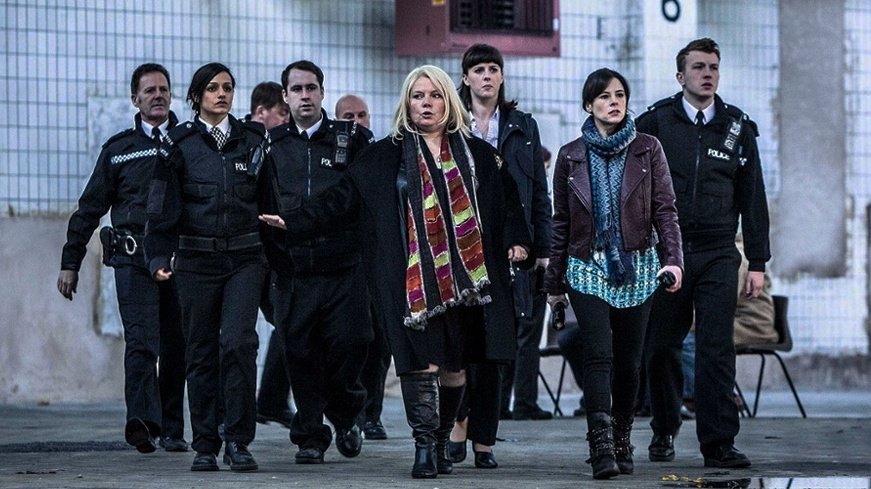 The bastard child of Shameless and Prime Suspect, this intense police procedural about a serial killer was slightly mis-sold as comedy. Although it’s funny – indeed, very funny – it’s the tension and genuine sense of fear that creates the perfect backdrop for the dark humour.

As you would expect from a Paul Abbott drama, there’s an ensemble cast crammed with great performances, but it’s Joanna Scanlan as DI Vivienne Deering who really shines. She grabs this larger than life character by the balls and creates something utterly charismatic, managing to combine rock-solid authority with bawdy humour and a heart of gold. 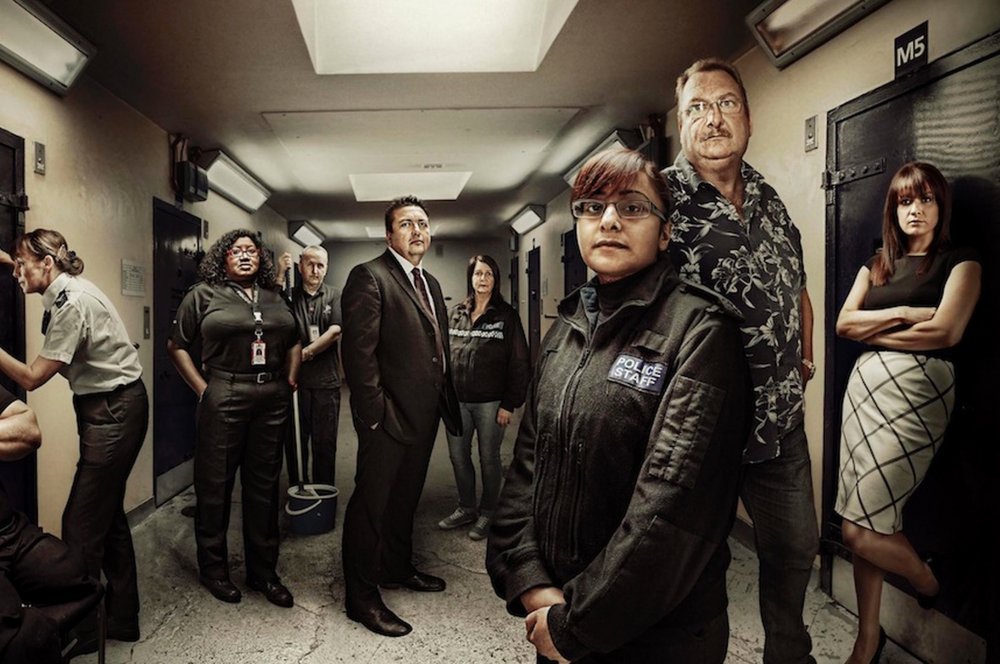 Following the work of Bedfordshire police, this landmark documentary series shone a light into the custody process and the routine day-to-day work of the force. Whether it was allowing a drunk to sober up, or gathering evidence in an abuse case or the case of a suspected paedophile, the officers are always involved in a race against the clock before charging a suspect, but their good humour never detracts from their determination to get to the truth.

In many cases the programme makers were able to interview the suspects, who spoke with great frankness, both during and after their custody. It was a hard choice to recommend this over The Detectives (BBC2), which also had excellent access to the investigative process and extremely moving testimony from the victims, but it was the range and diversity of the crimes in 24 Hours which just gave it the lead. 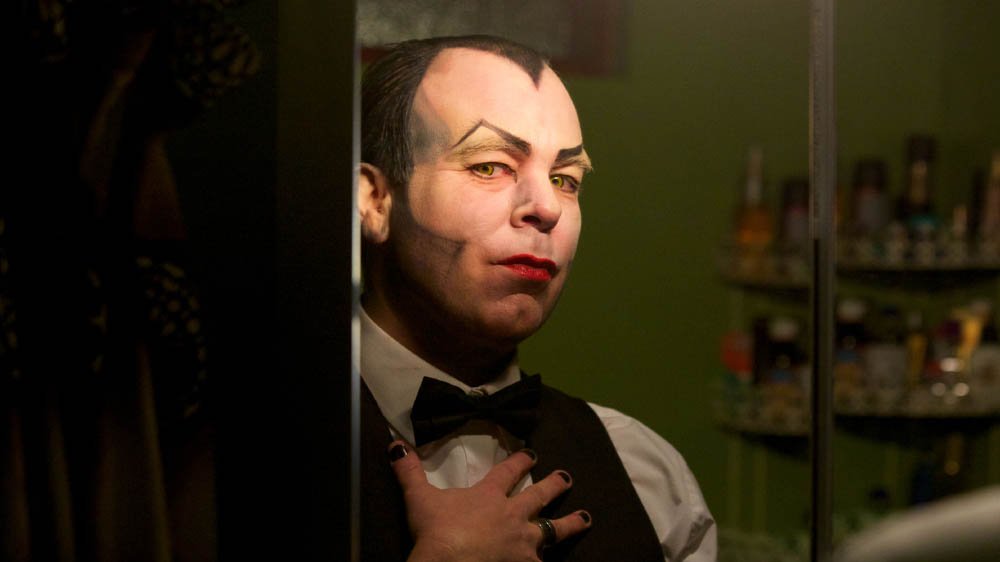 Steve Pemberton and Reece Shearsmith gave us another six wonderful tales of mystery, horror and general unease, all laced with their trademark wicked humour and featuring some wonderful guest stars, joining Steve and Reece in a gallery of characters ranging from the unfortunate to the deeply unpleasant. But it was the stand-out second episode, The 12 Days of Christine (starring Sheridan Smith), which cements its place in our top 10. You will not see a more brilliantly crafted and emotionally draining half hour of television this year or any year, and to say any more than that would risk spoiling it for anybody who has yet to experience it.

All will repay seeking out or watching again. Of course, with so much to consider, some favourites had to miss the cut, and tastes in comedy, particularly, are very personal, so below are some of the ones whose absence from the above list each of us most regrets, together with a few of the things from beyond our shores we enjoyed this year.

Detectorists (BBC4) may have been gentle, but, for me, had more to say about relationships and friendship than Catastrophe, as well as being beautiful to watch, and is certainly up there with my top comedy of the year, Count Arthur Strong (BBC1): woeful scheduling surely deprived the family audience of a perfect comedy gem in this case. I was hooked on Doctor Foster (BBC1), with Suranne Jones giving an amazing performance as the increasingly deranged lead character. Much to my surprise, I also found myself drawn into the world of Bournemouth pensioners that was Close to the Edge (BBC4). Although it was a scripted reality programme, the final episode in particular was extremely moving as the people involved spoke about their young lives, and the challenges age had brought them. I can’t finish without praising Doctor Who (BBC1), which has had an outstanding series, and pointing you to Nowhere Boys (ABC/CBBC), an excellent fantasy drama series from Australia.

The first series (in 2013) of Count Arthur Strong (BBC1) was very good, but this year’s return stepped it up a couple of notches with a tighter script and even better storylines – quite simply superb. Toast of London (C4) was another comic delight, reaching heights of silliness not even the Count could reach. The connection? – both were co-written by one half of the team behind Father Ted. If you prefer your comedy gentle and sweet then the beautifully crafted Detectorists (BBC4) was sheer bliss. In a year with several outstanding documentaries on the work of the police, two already noted above, The Murder Detectives (Channel 4) gave a further fascinating insight into the work that goes on behind the headlines. And for Sunday night escapism, you couldn’t really fault Poldark (BBC1). Honourable mentions, too, for My Mad Fat Diary (E4), the always topical and irreverent The Last Leg (Channel 4) and the soothing beauty of A Year on Scafell Pike (BBC4).

As many have pointed out, there is more television (particularly scripted drama) than ever before and it’s impossible to keep up. I have a long list of yet-to-be-watched but this year several things have kept me very amused, the supreme silliness of House of Fools (BBC2), the bawdy fun of Chewing Gum (E4), Peep Show’s (Channel 4) excellent final run and the linguistic pleasures of Toast of London (Channel 4). From overseas, I am mourning the end of the utterly brilliant Key & Peele (Comedy Central) and Hannibal (NBC), gorgeously mad to the end. Netflix continued to push boundaries and flex genres and I was gripped by the casual charm of Master of None and mind-bending globetrotting sci-fi series Sense8.

This year has had some exceptional comedy, which made it difficult to single any out but, despite the odd scheduling, Count Arthur Strong (BBC1) was a laugh-out-loud unmissable gem. My favourites from abroad were Gotham (Fox/Channel 5), a wonderful blend of comic book, gothic and crime drama. And, just when you thought Scandinavian television had peaked with Nordic noir, along comes an extraordinary historical series, 1864 (DR/BBC4). An engrossing, beautifully filmed drama of epic proportions, it was a war story of thunderous artillery, comradeship and incompetent politicians along with a love story of family, betrayal and loss. More like that, please.

In a year in which the observational documentary series hit new heights, I was sorry we couldn’t find room for Channel 4’s eye-opening series The Tribe, about daily life in an Ethiopian village. I laughed the most at House of Fools (BBC2) and found that half an hour with the Detectorists (BBC4) went by in what seemed like 10 minutes. My favourites from abroad were all second seasons that equalled or surpassed their first: if there was anything more engrossing and stylish than The Returned (Canal Plus/More 4), or with a better ensemble cast than The Legacy (DR/Sky Arts), or as downright entertaining as Fargo (FX/Channel 4), I’d like to know what it was. Andrew Jarecki’s The Jinx (HBO/Sky Atlantic) was a documentary which gripped like a drama. Oh, and Peter Capaldi is the best Doctor since Patrick Troughton and the recent season the best since Doctor Who (BBC1) came back.