Discover the droll, idiosyncratic films of one of Finland’s finest exports: Aki Kaurismäki. 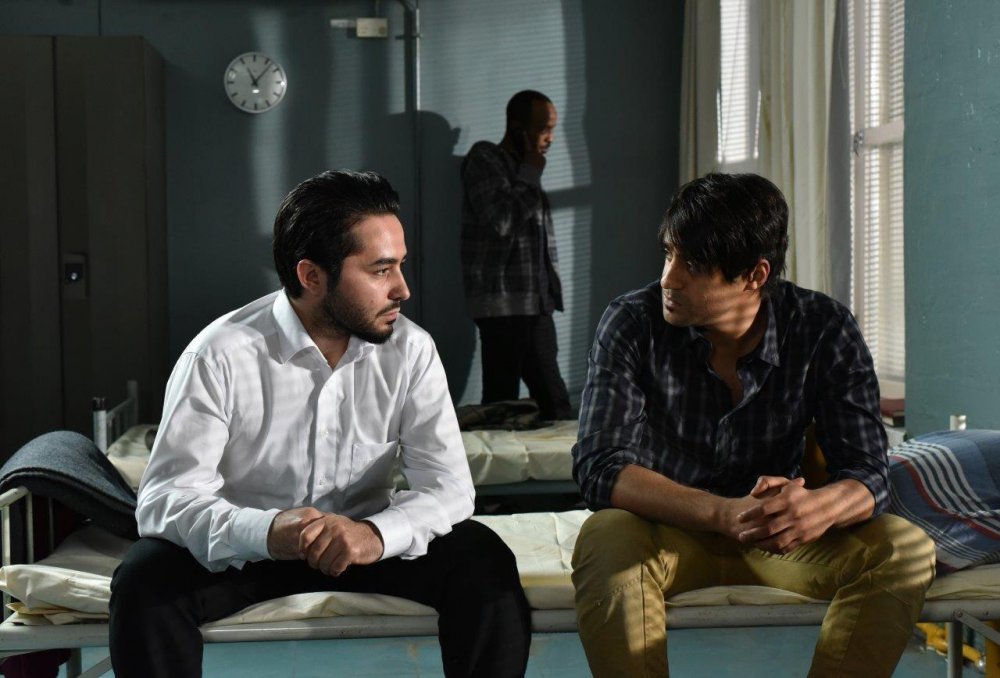 When it comes to Finnish cinema, one name stands at the front of the pack. In fact, there was a time when Aki Kaurismäki and his brother Mika were responsible for a fifth of all Finland’s cinematic output. Since his emergence in the early 1980s, Aki has become a major player on the international arthouse circuit, with an idiosyncratic style that’s unmistakable. It would be breaking with critical tradition not to use the word ‘deadpan’ in the first paragraph of a Kaurismäki feature, but there’s no simpler way to describe the straight-faced drollery of a tonal approach that lies somewhere between Buster Keaton and Jim Jarmusch.

But Kaurismäki is no put-on artist; the wealth of humanity and social criticism that pervades his work is suffused with empathy, even if tempered by humour – and plenty of belly laughs. Sentimentality is anathema to his films, in which the existentialist dread of hard-lived lives is leavened only by their absurdities. Then there’s the stylistic qualities that make his films so recognisable: the infrequent camera moves, vivid colour palettes and minimalistic production design.

His most recent film, The Other Side of Hope, released in 2017, is typical of the Kaurismäki mode. Taking the best director prize at the Berlin Film Festival, it harked back to his two previous offerings – The Man without a Past (2002) and Le Havre (2011) – by further tackling questions of immigration and the notion of community. 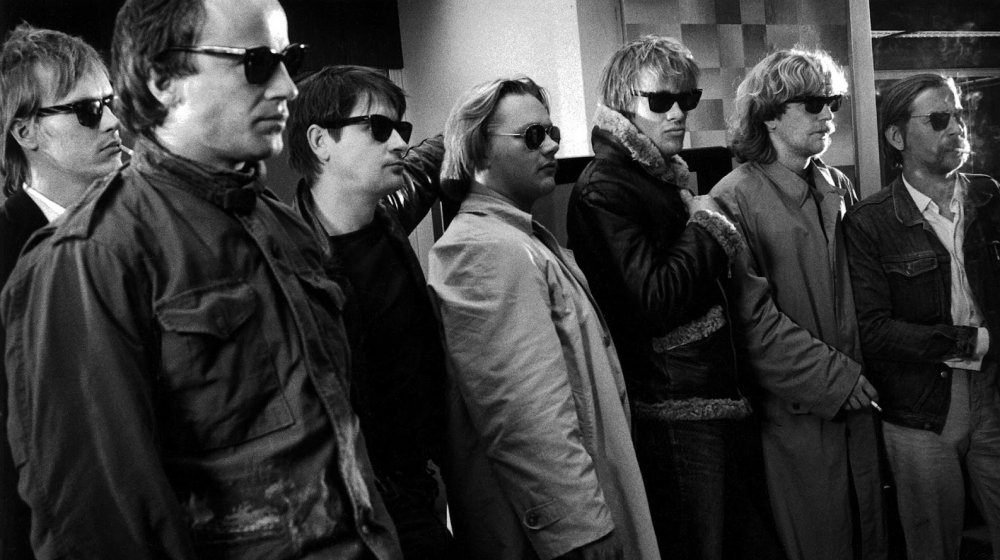 Following the relatively straightforward Dostoyevsky adaptation of his debut feature (Crime and Punishment, 1983), Kaurismäki threw caution to the wind for his second film. A highly stylised series of episodic non-sequiturs – reportedly shot while the director was consistently inebriated – what Calamari Union lacks compared with the discipline of later work it makes up for in absurdist pose. A motley crew of shaded geezers, all named Frank, head into the city in search of pastures new, armed with the vague concept of a promised land called Eira. Rock’n’roll-accompanied hijinks ensue, as the Franks get knocked off one by one. It may not make a lot of sense, but the straight-faced lols aren’t for want of what-the-hell attitude. 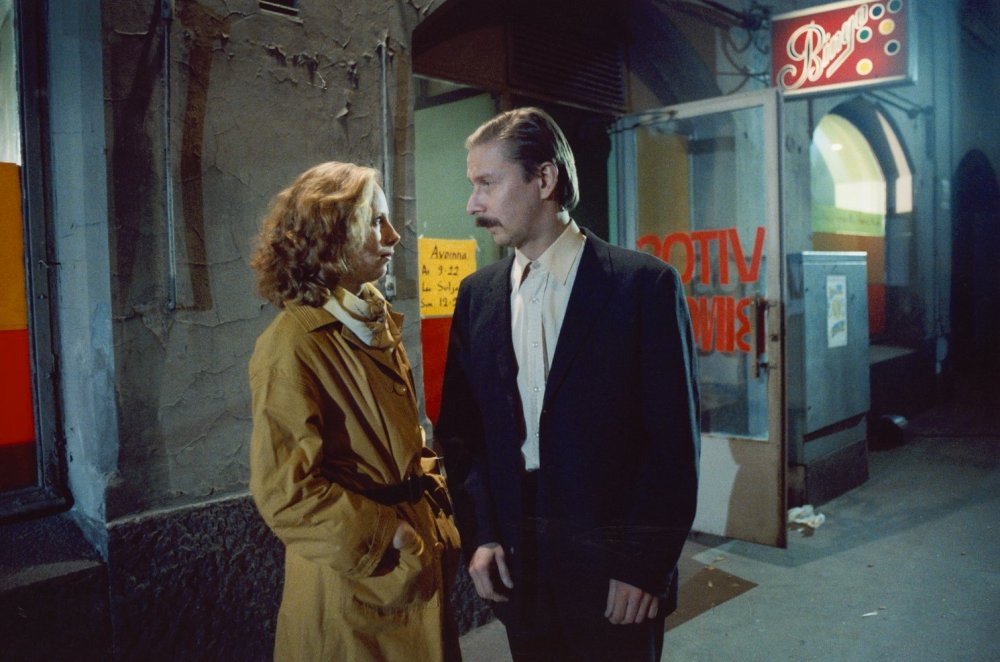 The first part of the so-called ‘proletariat trilogy’, and the film that set the blueprint for the Kaurismäki mode, Shadows in Paradise may run a mere 76 minutes, but one couldn’t mistake brevity for slightness, despite its wisp of a narrative. A garbage collector and supermarket cashier (regular players Matti Pellonpää and Kati Outinen) are brought together through circumstance and misfortune, their relationship tentatively blossoming in the face of dashed dreams and collective disappointments. Kaurismäki punctures the gloom of his muted palette with the occasional splash of primary colour, at once prefiguring the rigorous mise-en-scène that would become his stock in trade and the delicately negotiated possibility of a brighter future with which this beautiful miniature ends. 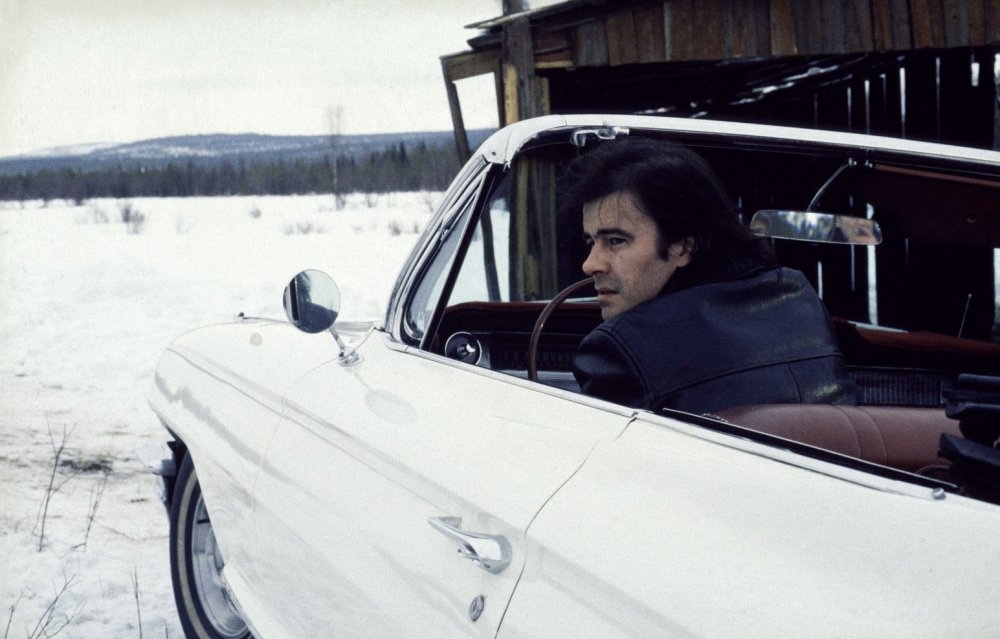 Kaurismäki has little interest in notions of love and happiness in romantic terms. More often than not, shacking up proves at best a question of convenience or survival. And so it is in Ariel, the second part of the proletariat trilogy, as Taisto (Turo Pajala) takes to the road in the broken-topped cadillac gifted by his father moments before he blew his brains out. He meets traffic warden Irmeli (Susanna Haavisto), but not before being robbed of his inheritance at a roadside burger bar. Catching up with one of his muggers, he’s arrested and imprisoned, hatching a plan with cellmate Matti Pellonpää to escape overseas with Irmeli and her young son. Kaurismäki takes his first turn into genre territory for Ariel’s last act, while retaining the pervasive existential yearning exemplified by a closing rendition of ‘Somewhere over the Rainbow’ – sung in Finnish, natch. 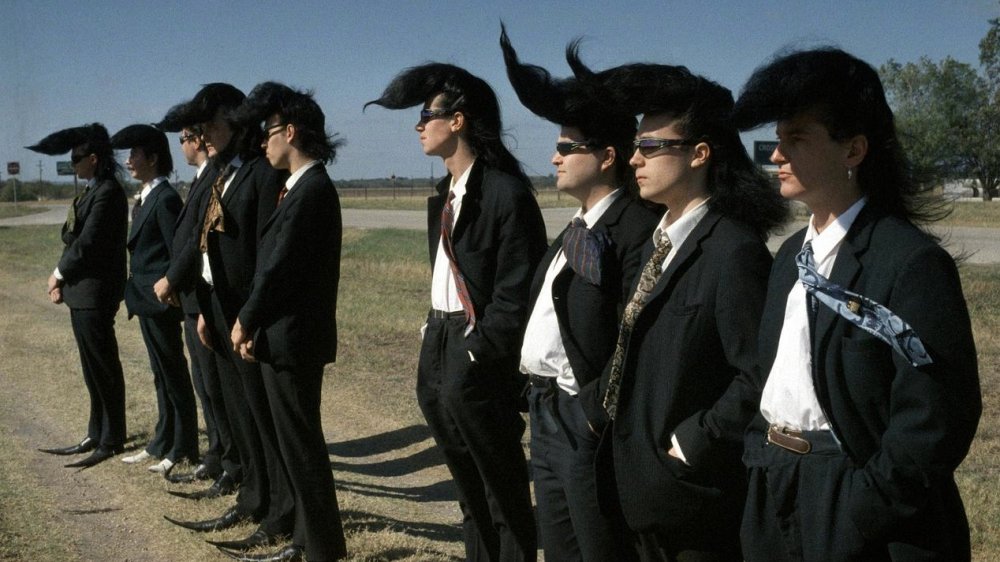 The broadest – and perhaps the funniest – of Kaurismäki’s comedies, it’s easy to see why Leningrad Cowboys Go America represented the filmmaker’s major breakthrough on the international stage. It’s since attained something of a cult status, spawning a (lesser) sequel in Leningrad Cowboys Meet Moses (1994) and a concert film the same year in the marvellously bonkers Total Balalaika Show. Unapologetically silly, the original sees the eponymous, ludicrously be-coiffed band up sticks “somewhere in the Tundra” to try their luck Stateside (“They’ll swallow any old shit there”), strapping the frozen corpse of the bass player to the roof of their ride. As per usual, there’s nary a smile in sight as the toe-tapping numbers swing – gurning accordion player notwithstanding. If Kaurismäki keeps the sight-gags flowing, he does so with one eye fixed on the post-industrial degradations of the American road. 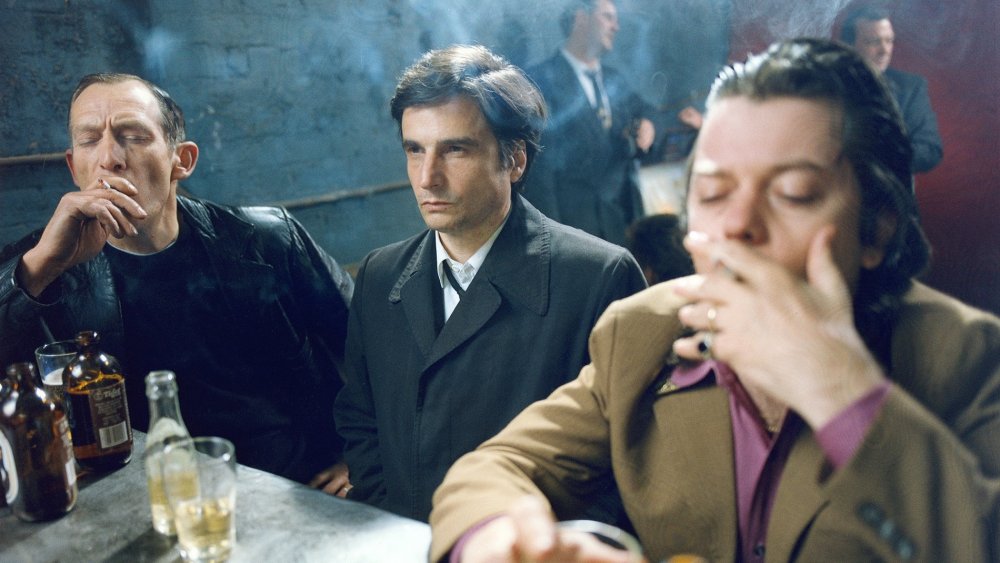 When Henri Boulanger is made redundant after 15 years behind a desk, he determines to end his life. With two failed suicide attempts under his belt, he seeks out the services of a hitman, buying a contract on his own head. Spending his final hours at the pub, Henri meets flower-girl Margaret, and life suddenly isn’t the dead end it seemed – if he could just cancel the contract. Kaurismäki ventured to London for his one film in English, enlisting the services of Jean-Pierre Léaud for morbid schlub, Henri. A nocturnal, Kafka-esque nightmare, steeped in noirish tropes, it’s like After Hours (1985) by way of Hitchcock. Kenneth Colley finds the humanity in his purposeful hitman with just months to live, while Kaurismäki’s love for English rock’n’roll sees room for a wonderful Joe Strummer cameo. 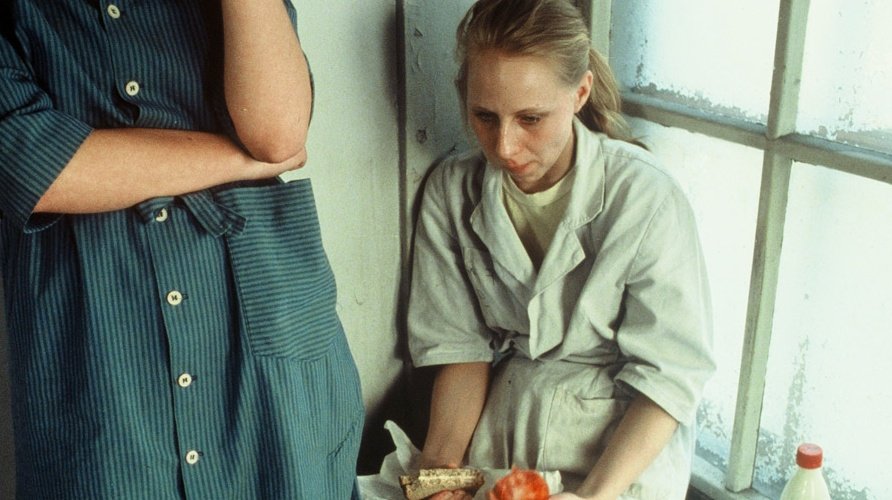 The final part of the proletariat trilogy, The Match Factory Girl is Kaurismäki’s shortest film and one of his very best. It also finds the director at his most stripped back. An extended opening montage of factory machinery in action plays like something from a Frederick Wiseman doc, before we’re introduced to Kati Outinen’s titular shrinking violet, Iiris. She’s stuck at home with her dismissive parents, ignored at the local dancehall and discarded by the cruel suitor who knocks her up. When she buys some rat poison, the compound grimness shows little sign of letting up. But Kaurismäki has something else up his sleeve for a last-minute bait and switch. Bleak social realism takes a turn into pitch black comedy, as Iiris decides she’s had enough, finally showing her stripes as Finland’s answer to Lady Snowblood. 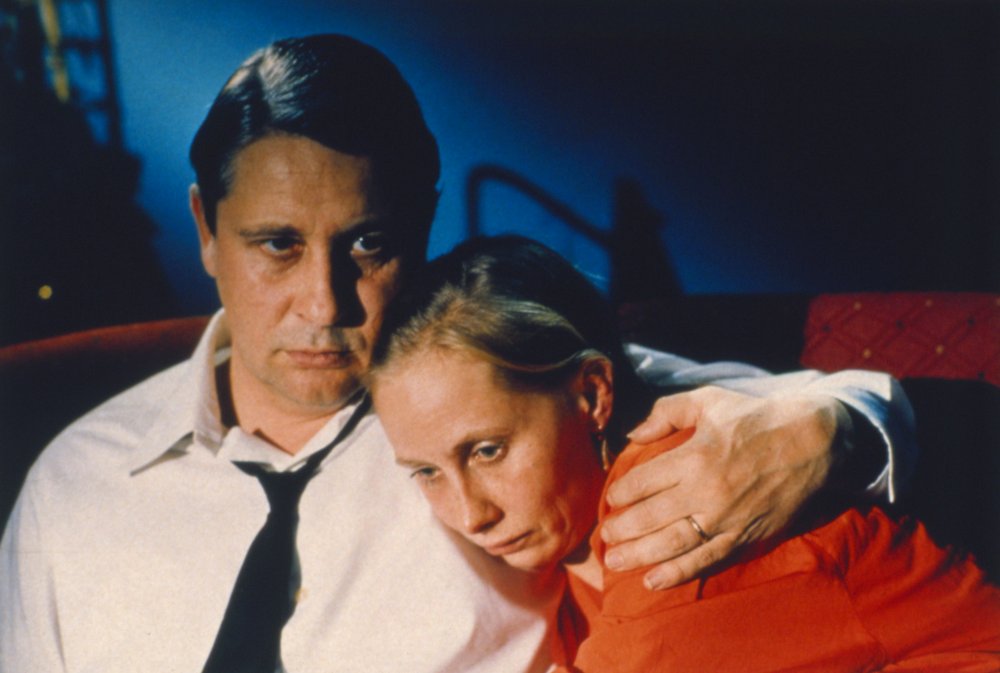 The title sounds like something by Mikio Naruse, and Drifting Clouds certainly foregrounds the economic concerns central to the films of the great Japanese filmmaker. Otherwise, this is pure – and prime – Kaurismäki, charting the struggles and misfortunes of a couple one (more) stroke of bad luck away from the breadline. For all the formal rigour on display – the vivid colour schemes and just-so compositions – it’s one of the filmmaker’s most poignant and compassionate works, the droll situational comedy and ill-fated ironies never at the characters’ expense. A final rising crane shot, invoking the title, is simply magic. 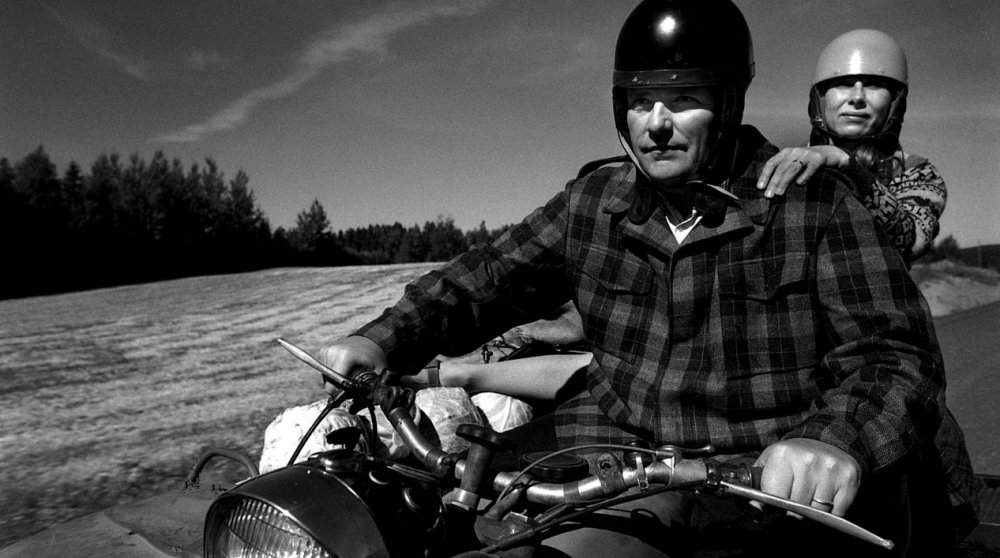 With so many of Kaurismäki’s characters monosyllabic at best, it’s a wonder it took him so long to make a silent movie. Exquisitely shot by longtime cinematographer Timo Salminen in silvery black and white, Juha may well be an exercise in pastiche, but it remains every bit the Kaurismäki picture. What begins in pastoral mode soon takes a darker turn, as Marja’s (Kati Outinen) promise of a better life in the city sees her sold into prostitution by André Wilms’ dashing rogue. There’s plenty of fun to be had – not least by the cast – in the stylistic reproductions and subtle anachronisms. I’d take it over The Artist (2011) any day of the week. 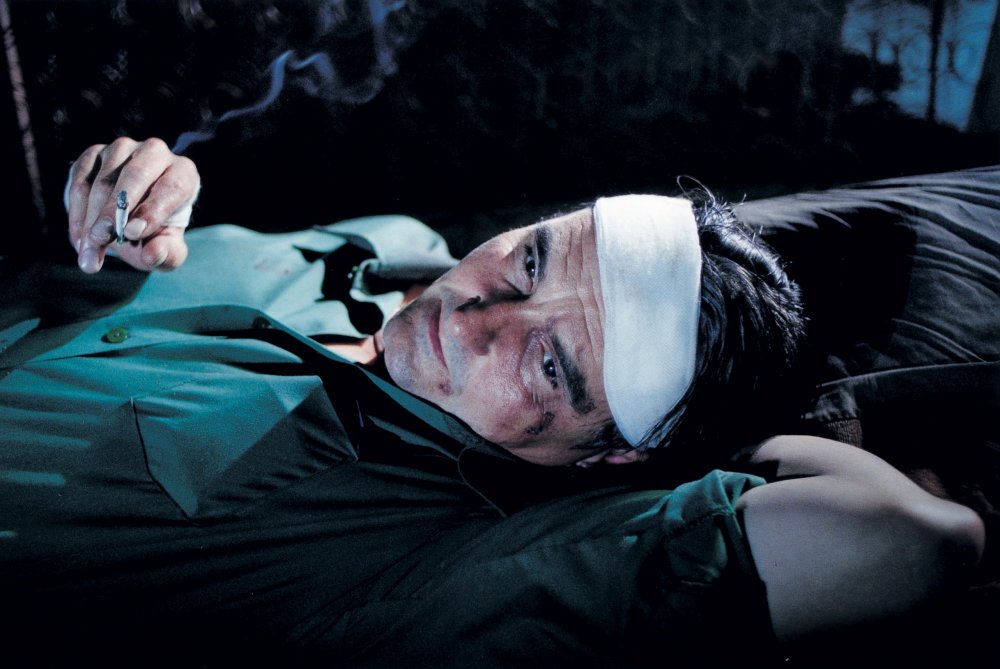 The second part of what came to be known as the ‘loser trilogy’, following Drifting Clouds and preceding Lights in the Dusk (2006), The Man without a Past proved Kaurismäki’s biggest critical hit to date, taking home a slew of awards at Cannes (including the Grand Jury prize and best actress for Kati Outinen) and an Oscar nomination for foreign picture. Like Drifting Clouds and Le Havre, it’s a brightly idiosyncratic testament to a community’s capacity for kindness and resilience. It finds an unnamed amnesiac (Markku Peltola) trying to make sense of his place in the world after a beating sees him left for dead. A ragtag bunch of down-and-outs nurse him back to health, as love blooms with Outinen’s Salvation Army worker. Kaurismäki’s rarified blend of social commentary, Keaton-esque deadpan and formal authority has never felt so refined. 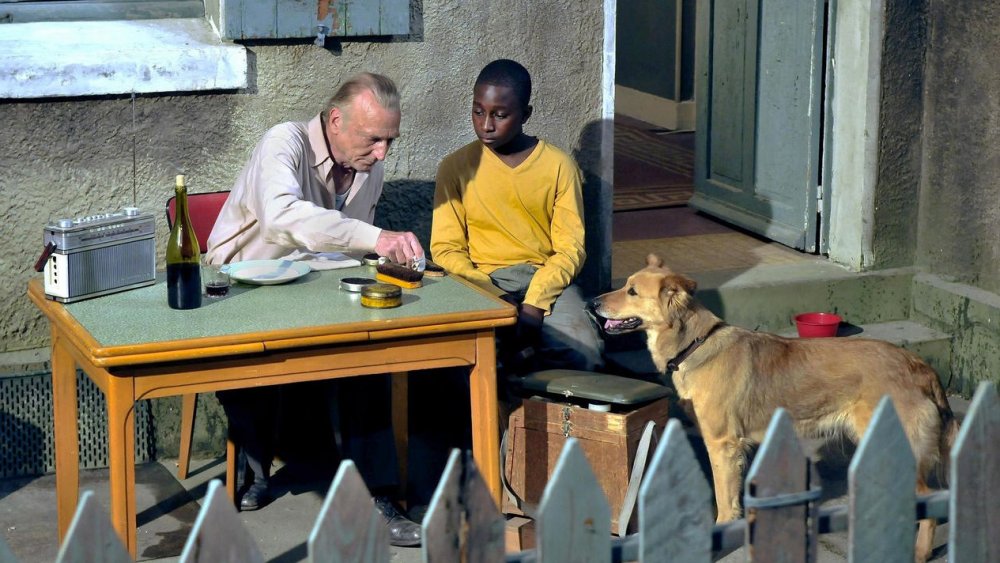 There’s a notable softening of temperament in Le Havre, perhaps the least cynical of Kaurismäki’s pictures. Alongside The Other Side of Hope, it’s also the filmmaker’s most directly political film, charting as it does the fortunes of shoe-shiner Marcel (André Wilms) and his unexpected ward, a young Gabonese refugee named Idrissa (Blondin Miguel). As suggested previously by The Man without a Past, Kaurismäki finds social activism inseparable from the humanistic concerns of community, and Le Havre sees forces rallied to smuggle Idrissa across the channel. The reward for Marcel is a deadpan miracle straight out of Carl Dreyer’s Ordet (1955). Not that Kaurismäki could ever ascribe such matter-of-fact happenings to the divine. His faith is placed in the resilience of the human spirit and a capacity for kindness found in even the most buttoned-up copper.