100 years of Japanese animation: One great film per decade

Enter a world beyond anime as we celebrate the centenary of animation in Japan by exploring some less familiar corners of this rich history. 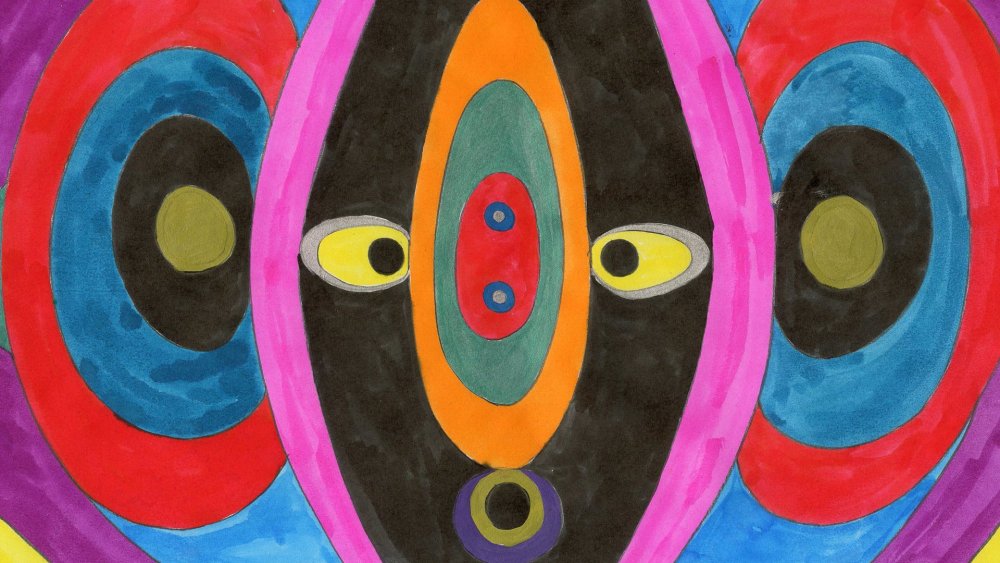 Animation is one of Japan’s most significant cultural exports. The ideas and aesthetics of touchstone titles like Akira (1988) and Ghost in the Shell (1995) have long been assimilated by Hollywood and other industries. Across the world, the works of Studio Ghibli continue to delight children and adults alike, while the massive global success of Makoto Shinkai’s teen body-swapping fantasy Your Name (2016) has seen it become the top-grossing Japanese movie of all time.

The birth of Japanese animation is attributed to three men, Oten Shimokawa (1892-1973), Junichi Kouchi (1886-1970) and Seitaro Kitayama (1888-1945), who all, operating solitarily and independent of one another, produced their first animated shorts in 1917. To celebrate this 100th anniversary, the National Film Center of Tokyo has opened its Japanese Animated Film Classics online archive of prewar titles.

This online resource provides a wonderful starting point from which to hop through the decades and explore how the nascent industry evolved to become the leviathan it is today. We may well be familiar with the landmarks in the celebrated homegrown strain known as anime, but what about the rich tradition of independent practitioners in Japan, working in a variety of different media, whose work runs parallel it?

Oten Shimokawa’s Imokawa Mukuzo, The Janitor is commonly held as the first Japanese animation released commercially, though there’s no evidence to support this claim beyond its makers’ memoirs. None of the five works Shimokawa produced, all from 1917, survive today. The oldest extant example of Japanese animation is Kouchi’s film, released on 30 June 1917. Its four minutes depict a hapless samurai’s attempts to test his blade. Prior to the use of transparent celluloid layers, early animators had to draw every part of every single frame by hand, although in certain sections of this film, it is clear Kouchi has used the time-saving device of whitewashing over and redrawing the areas of the image containing the moving parts.

Kouchi’s former assistant Noburo Ofuji (1900-61) is best remembered today for his use of chiyogami, a traditional woodblock-printed decorative paper, for his ornate cut-out animations. This condensed version of the 16th-century Chinese literary classic Journey to the West (most familiar to UK audiences from the NHK TV series Monkey that aired on the BBC in the late 1970s) provides a wonderful example of his trademark style.

As well as cel techniques, Ofuji later experimented with Lotte Reiniger-inspired silhouettes for Dream of a Snowy Night (1947) and multi-coloured cellophane collages for Whale (1952). He was the first Japanese animator to gain international recognition, with works playing at Cannes and Venice during the 1950s, and in 1962 the Mainichi Shimbun newspaper established an award bearing his name to recognise outstanding artistic achievements in animation. 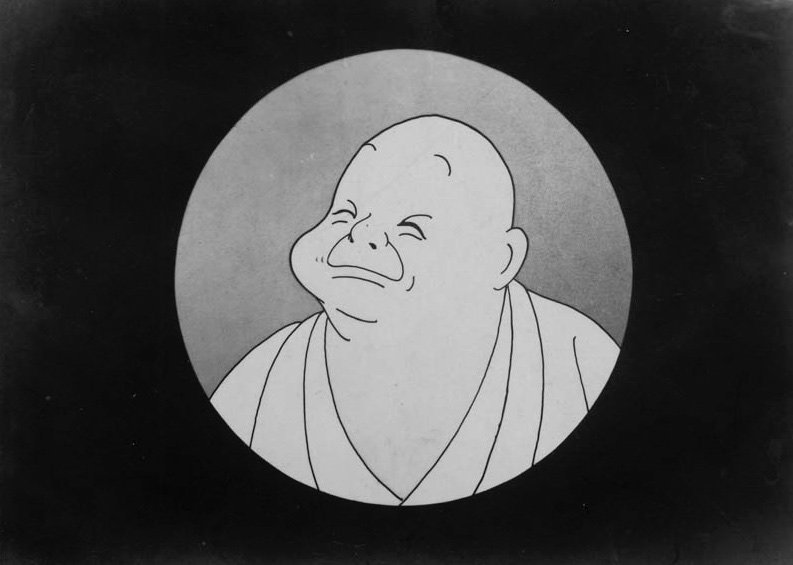 In this comic short, a horde of shape-shifting tanuki (raccoon dogs) are lured into a Buddhist temple by the sound of a monk and his young acolyte playing gramophone records, which the mischievous creatures attempt to steal. It was the first Japanese cel animation realised using cel techniques, resulting in more detailed backgrounds, more expressive character designs and more fluid movements than possible before.

Funded by the Ministry of Education, Mitsuyo Seo’s lyrical portrait of the impact on the local insect community of a young ant’s discovery of a violin represents another landmark. It was the first film to make use of a four-level multiplane camera stand, allowing for more sophisticated parallax movement and lighting effects.

Although monochrome, the film bares a strong resemblance to the Hollywood cartoon Mr. Bug Goes to Town (1941), although ironically the Fleischer brother’s feature was not released in Japan at the time, with all American imports banned following the attack on Pearl Harbour. Seo would refine his techniques, with generous financial support from the Imperial Japanese Navy, in the 37-minute Momotaro’s Sea Eagles (1943) and its 74-minute follow-up, Momotaro, Sacred Sailors (1944). 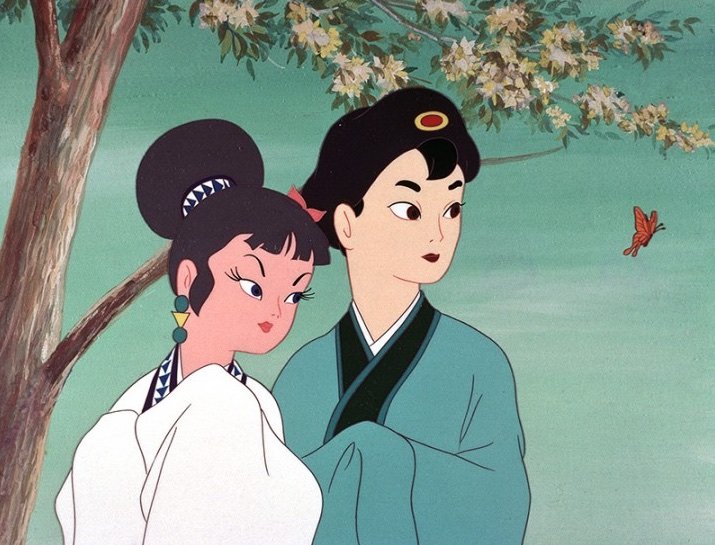 The only feature on this list, Legend of the White Serpent is included because, as the first feature-length, full-colour and widescreen animation produced in Japan, it heralded the ambitions of its producers, Toei Animation (established in 1956), to create animation for international audiences – hence the adoption of the familiar Chinese folk legend about a snake embodied in the form of a beautiful prince as its source and the old-school chinoiserie of its designs.

The effacement of any readily identifiable Japanese elements typified the output over the following decades of the studio, which would provide a crucial training ground for Studio Ghibli’s Isao Takahata and Hayao Miyazaki. Released dubbed and re-edited in America in 1961 as The Panda and the Magic Serpent, with the Japanese names of the production team removed from the credits, it demonstrates how Japanese animation had a global reach long before the term anime was coined. 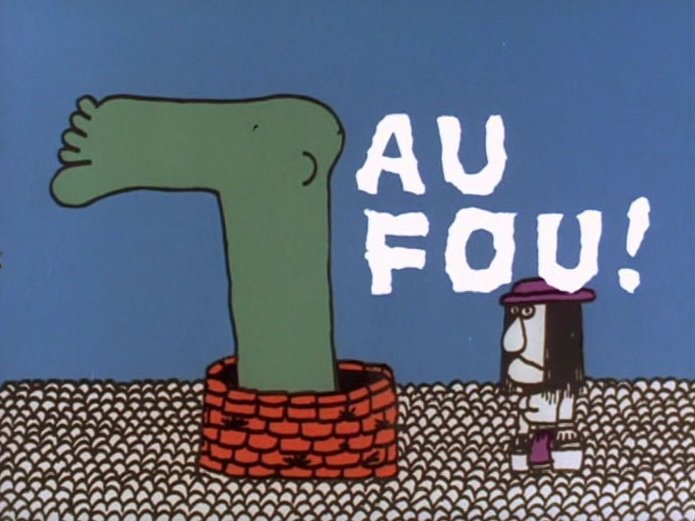 With Toei Animation releasing theatrical features on an annual basis and Osamu Tezuka’s Astro Boy (1963-66) establishing domestic animation as a major fixture on television, the green shoots of the early anime industry had firmly taken root by the mid-1960s. Not that there weren’t those prepared to operate outside the system to explore the medium’s potential as something other than kids’ entertainment.

One such figure was Yoji Kuri, a cartoonist and illustrator little discussed nowadays whose independently produced, adult-oriented absurdist skits such as Clap Vocalism (aka Human Zoo, 1962) and Ai (1963) – as well as more surrealistic works such as Aos (1964), featuring a vocal accompaniment by Yoko Ono, and the Hieronymous Bosch-inspired The Midnight Parasites (1972) – embody the irreverent, anarchic, anything-goes approach of the era. They played widely at international animation festivals at the time. 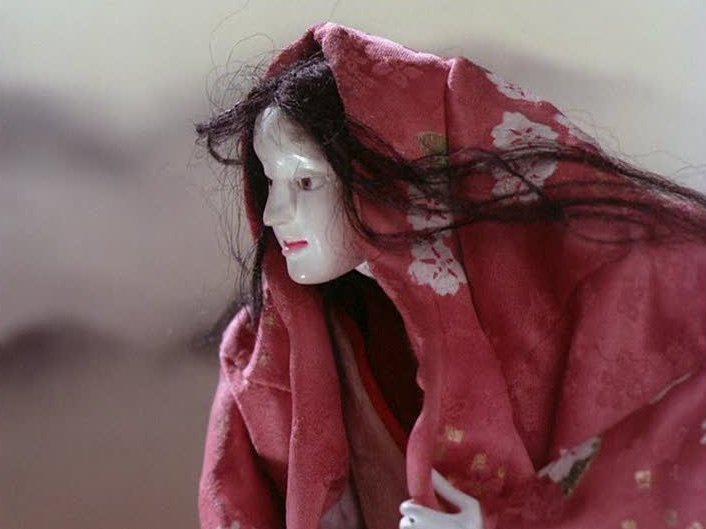 After several decades of creating exquisite puppets in traditional costumes, it was only after a year studying in Prague in 1963 under Jiri Trnka that Kihachiro Kawamoto (1925-2010) devoted the rest of his life to his exquisitely crafted stop-motion animations, drawing from Japan’s rich cultural heritage for his stories and aesthetics.

Based on a famous Kabuki play, the hauntingly atmospheric Dojoji Temple is one of his most bewitching works. It follows a young monk as he is lured from his pilgrimage by a seductive maiden, who transforms into a vicious serpent and pursues him until he seeks refuge in a distant temple.

Though he’ll forever be remembered as the ‘father of manga’ and the creator of Astro Boy, one should not overlook the more boundary-pushing exercises in the animation field of the legendary Osamu Tezuka. These include the poetic Mermaid (1964), the Ofuji-award winners Tale of a Street Corner (1962) and Pictures at an Exhibition (1966), all the way up to a psychedelic tale of medieval witchery that bankrupted his studio Mushi Pro, Belladonna of Sadness (1973), which, like Tales of a Street Corner, was actually realised by Eiichi Yamamoto under the Tezuka banner.

Tezuka’s masterpiece has to be Jumping (1984), produced by his new Tezuka Pro company. Its wittily experimental narrative unfolds as a sequence of increasingly ludicrous landscapes, from its simple opening provincial street scene through jungles, cities and on to a volcano and a nuclear war zone – all depicted from the perspective of its leaping, unseen protagonist. 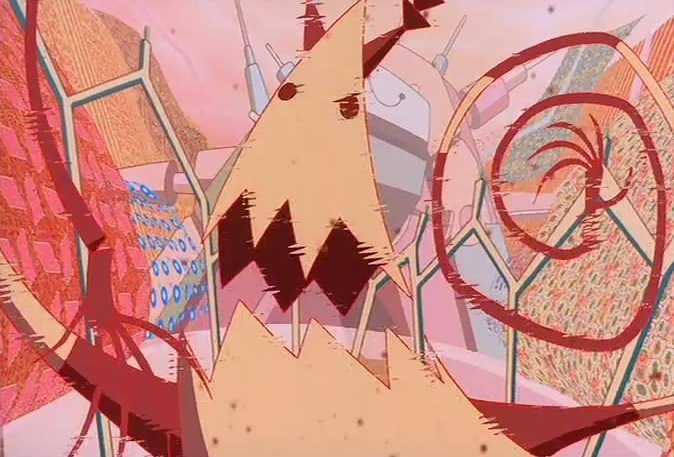 Through the monumental works of Katsuhiro Otomo and Mamoru Oshii, the futuristic aesthetic of anime was well entrenched by the end of the millennium. Noiseman Sound Insect is a great example of an experimental 15-minute short cast in the same mould. The titular ‘Noiseman’ is an artificial life-form created by a resentful scientist to clean up a dystopic, decadent society by consuming music, leaving only a trail of crystals and a wall of noise. Only a biker gang member with a nostalgic fondness for melody can stop its relentless aural devastation.

With its distinctive character designs and its pioneering hybridisation of computer-generated elements with traditional cel animation, this cult oddity from one of the founders of Studio 4°C anticipates the studio’s later work on the various segments of The Animatrix anthology (2003), Mind Game (2004) and Tekkonkinkreet (2006). 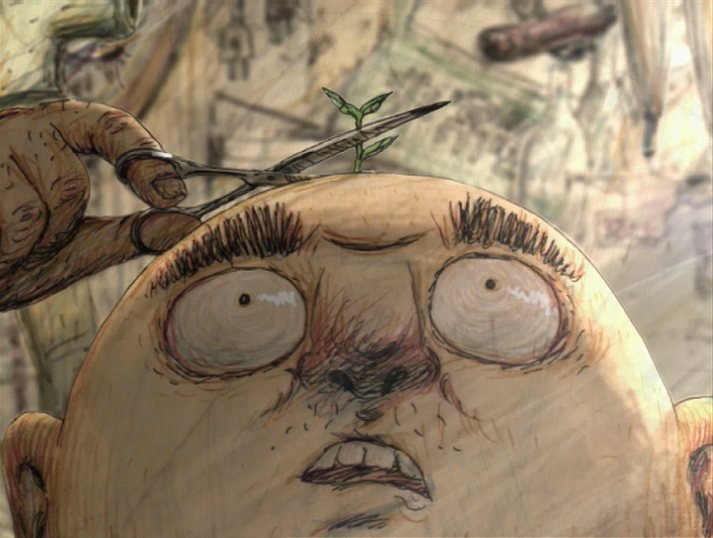 Mt. Head’s nomination for best animated short in the same year that Studio Ghibli’s Spirited Away (2002) romped home with the best animated feature at the Academy Awards was a timely reminder that there’s a lot of animation produced in Japan that can’t be described in any way as anime.

Its sardonic portrait of a penny-pinching old curmudgeon so keen not to waste anything that he swallows a cherry pip, only for it to sprout forth from his cranium, was based on an old tale from the traditional form of comic storytelling known as rakugo. It put Yamamura firmly on the map as one of the leading lights of a new generation of independent animators in Japan.

The biomorphic abstractions of Mirai Mizue’s extraordinary shorts, such as Devoir Dinner (2008) and JAM (2009), give the impression of gazing through a microscope into a psychedelic hidden world of mutating microbial blobs, segmented worms and cell-like growths – a world where the solitary animator, deploying only paper and pens, is God.

The free-flowing hypnagogic imagery of Wonder represents the pinnacle of Mizue’s obsessive-compulsive approach to his craft. The results of a year spent in 2012 creating 24 hand-drawn frames, or exactly one second of screen time, for each of its 365 days, with the final image of the day becoming the starting point for the next, it is a perfect case study in animation reductio ad absurdum, with form playing a secondary role to colour and motion.