Based in a centuries-old genre of Chinese literature, the wuxia martial arts movie takes place in a world of swords, sorcery, chivalry and romance. Here are 10 of its jaw-dropping milestones. 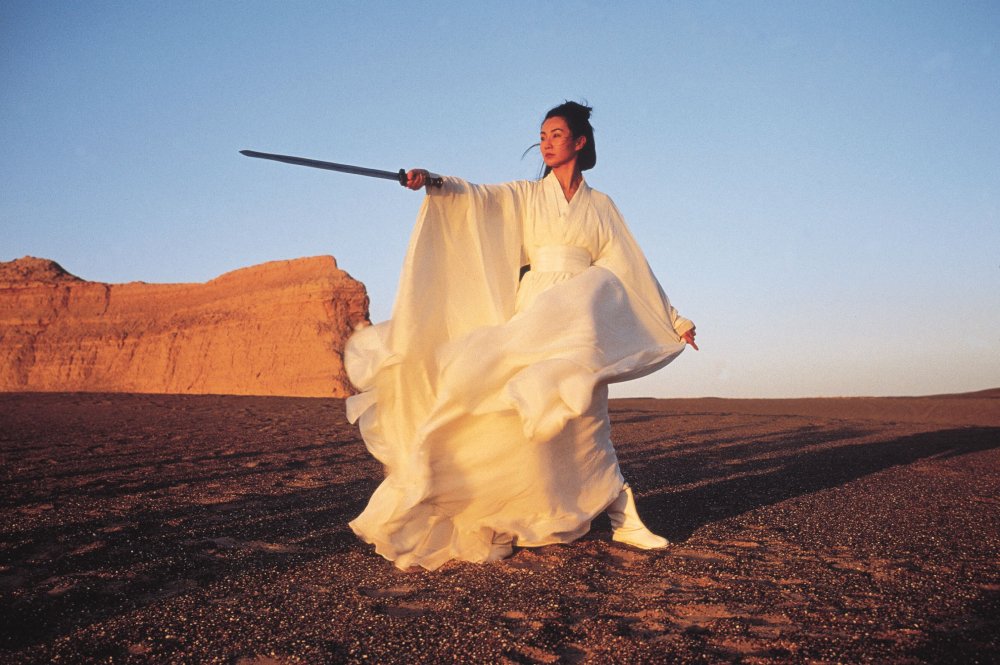 noun. A genre of Chinese fiction and film, concerning the adventures of sword-wielding chivalrous heroes

Before kung fu, there was wuxia. Before cinema, there was wuxia. A widely encompassing term – literally translated as martial (wu) chivalry (xia) – what was made famous in the west as a subgenre of martial arts cinema, finds its roots in seventh-century romantic literature and poetry, evolving through hundreds of years of oral and written tradition.

The anti-Confucian value systems of wuxia literature, with their emphasis on the attainment of personal freedom, saw much of it repressed and reconfigured throughout history. The same went for its early cinematic incarnations, the Chinese government banning production in the 1930s as a means of protecting the young against moral corruption.

It would re-emerge 20 years later, but with strictly enforced moral codes in place, and it wouldn’t be until the late 60s that the genre would truly come into its own, with the modern wuxia film born under the guidance of the milestone films of Chang Cheh and King Hu.

A genre as synonymous with the supernatural and the philosophical as the codes of honour and justice under which its heroes fight, it’s often characterised as much by its melancholy romanticism as by its fantastical, high-flying clashes of sword and fist.

So, when BFI Southbank celebrated a Buddha’s Fist-ful of Chinese genre classics in 2015, we took to the treetops to seek out 10 sword ’n’ sorcery gems from the wuxia genre. 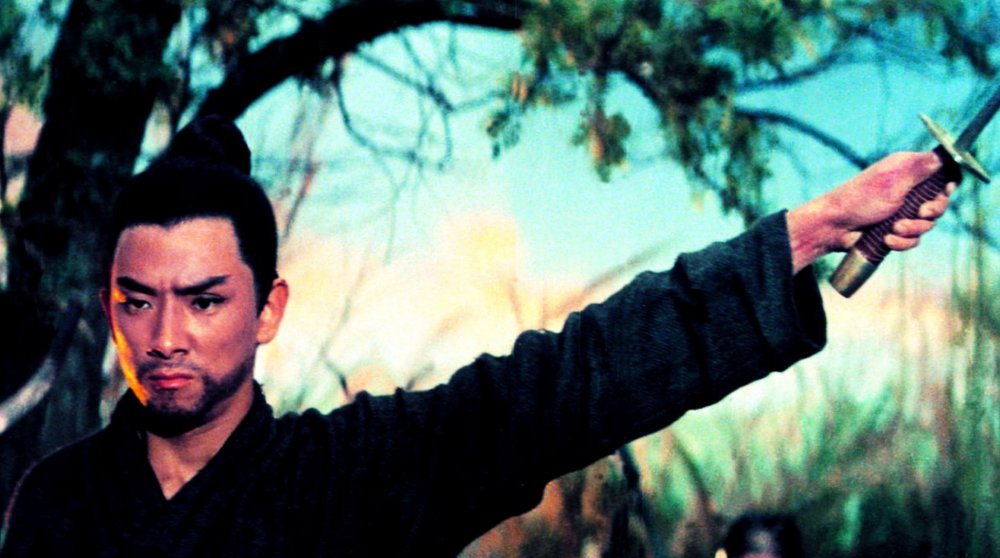 It’s difficult to underestimate the influence Chang Cheh’s classic would have on the Chinese martial arts film. Taking its thematic cues as much from Japanese samurai films as the American western, One-armed Swordsman sees Chang lift the in-house Shaw Bros studio-shot aesthetic to new levels of artifice and abstraction.

In its baroque orchestrations and macho codes (laced with a liberal dash of Freud), it’s the antithesis of the other film that kickstarted the wuxia wave in the late 60s, King Hu’s female-centric Come Drink with Me, released the previous year. The film made a star out of leading man Jimmy Wang Yu, and while his acting chops were never going to turn him into the next James Dean as Chang had hoped, the film’s many sequels and spin-offs still saw him become an icon of alienated youth in his native China. 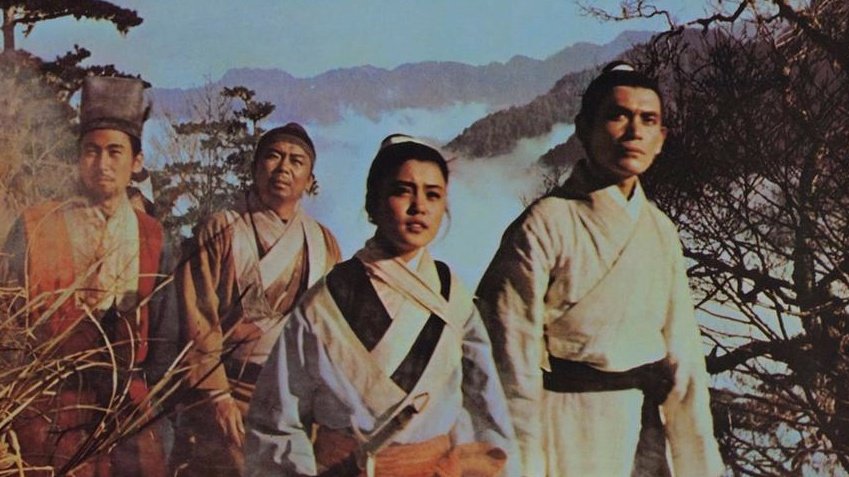 If you’re familiar with the work of the great Taiwanese filmmaker Tsai Ming-liang, you’ll have caught snatches of King Hu’s wuxia masterpiece illuminating the fumbled passes of a picture palace’s dying days in Goodbye Dragon Inn (2003). A director to rank alongside the greats, Hu’s influence was far-reaching, and he was as in command of the exquisite compositions of his widescreen vistas as the Hawksian group dynamics of his Inn trilogy’s confined spaces.

Yet in keeping with his adoration for the Beijing Opera, Hu’s is a cinema of movement. One could discuss the evolution of the wuxia genre purely in terms of its approach to film editing, and critic David Bordwell has written brilliantly on Hu’s pioneering technique. Unifying the historical, cultural and philosophical preoccupations of wuxia’s literary antecedents with a progressive, slyly allegorical modernism, Hu’s cinema proves that genre and great art needn’t be mutually exclusive. 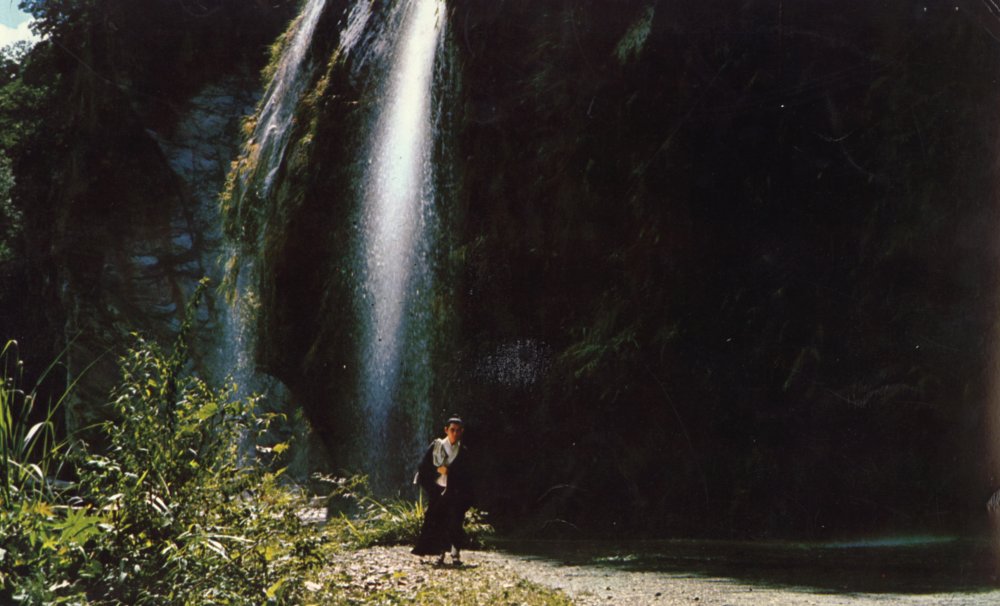 Not only one of the great wuxias but one of the great Chinese films, King Hu’s magisterial, three-hour-plus epic A Touch of Zen was the first of its kind to take a prize at Cannes. A production as mammoth as its running time, its influence is often cited by its disciples – most notably director Ang Lee – even as the transcendent qualities of both its form and craft prove matchless.

A journey into enlightenment steeped (as its title suggests) in Buddhist philosophy, it was originally exhibited in two parts, the stunning centrepiece of its bamboo forest battle straddling the two. Hu’s reconceptualisation of martial arts cinema challenges and subverts convention, as much through his orchestration of movement and mise-en-scène as through his aesthetic and philosophical enquiries. No one on this list can touch Hu at his peak, and A Touch of Zen’s upcoming big-screen outing as part of the Chinese cinema season (given the inadequacy of its current home video transfer) is simply unmissable. 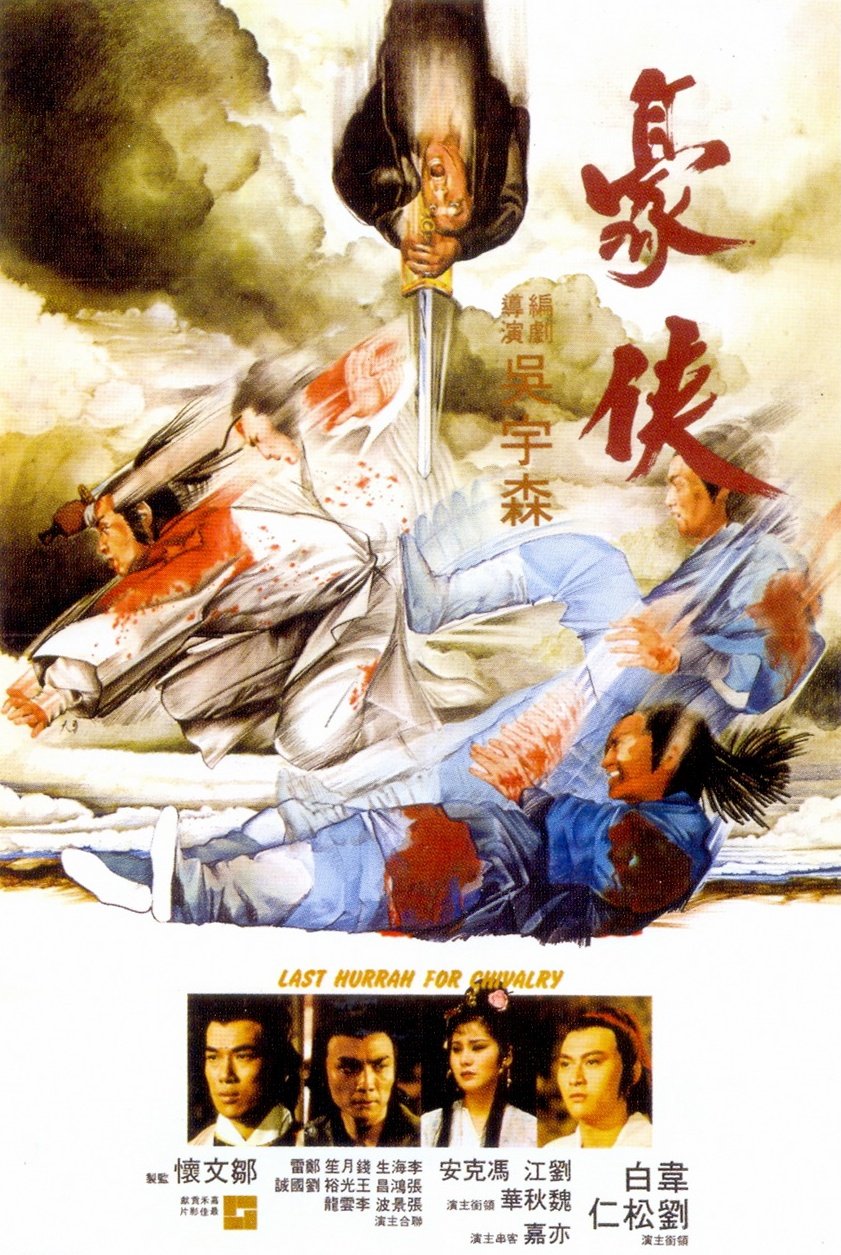 Guns weren’t always John Woo’s weapon of choice. Before he became the dove-bothering godfather of the new wave of Hong Kong action cinema in the 80s and 90s with the likes of A Better Tomorrow (1986) and The Killer (1989), Woo earned his stripes on the roster of Golden Harvest as one of the studio’s go-to guys, directing over a dozen features for the studio in its heyday.

His violent period piece Last Hurrah for Chivalry represents one of his better earlier efforts, offering more in its rehearsals for the thematic and aesthetic tics that would come to define his mature style than it does in its by-numbers narrative. Woo doesn’t spare on the claret, his slow-mo-enhanced sword fights and early take on notions of honour and duty prefiguring his symphonic elevations of violence to come. 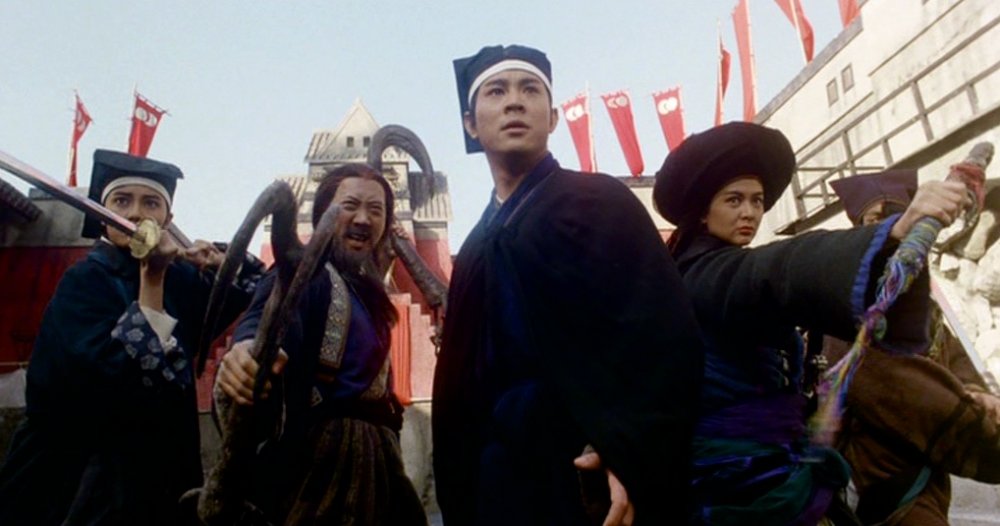 Offering a directing gig to King Hu, whose career had since fallen into the doldrums, Swordsman (1990) was Tsui Hark’s opportunity to both work with and pay homage to his hero. It didn’t end well, with the legendary director barely lasting a fortnight on the project, the film quickly becoming sullied by extensive reshoots and the patchwork effect of its five subsequent directors.

So as Confucius (probably) said: be thankful for second chances. Picking up where its progenitor left off, yet superior in just about every respect, Swordsman II is a furiously paced wuxia epic par excellence. Directed by Ching Siu-tung – from a script by Tsui – in the backlit, wind-machine enhanced default aesthetic register familiar from many an early 90s Chinese genre movie (think Bonnie Tyler music video as directed by Mario Bava), it’s a high-flying, ninja star-riding, gender-bending adrenaline rush of swords ’n’ sorcery. 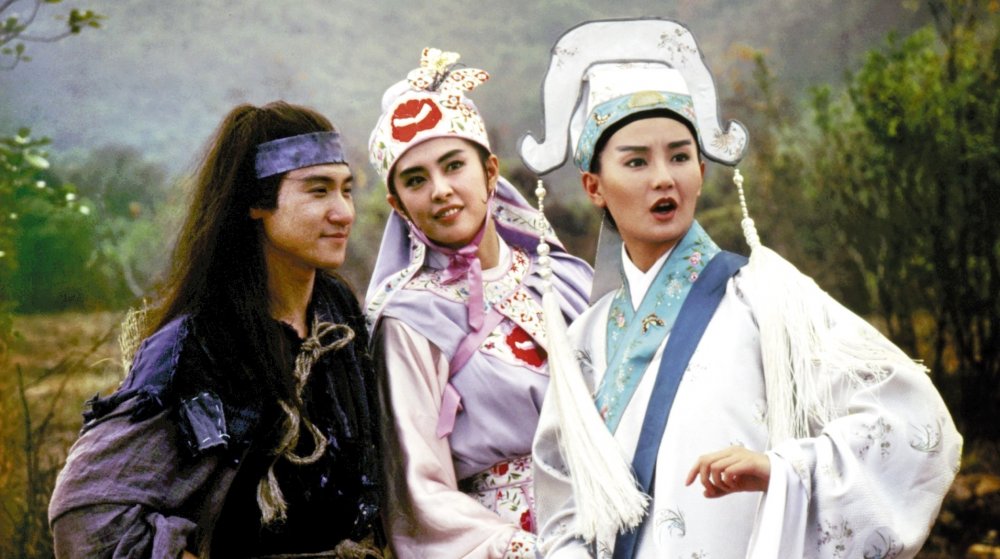 Any attempt to follow the film’s plot proves an exercise in frustration, yet so manically unhinged is its every sequence, it’s impossible not to get swept along by its effervescent pledge to stick two fingers up to every wuxia (and cinematic) convention. Besides, you won’t find many other opportunities to see Tony Leung pretending to be a duck. It’s a riotously camp extravaganza like little else, and if you make it as far as the scene in the cave with the gorilla, the dinosaur and the parrot, you’ll know that resistance is ultimately futile. 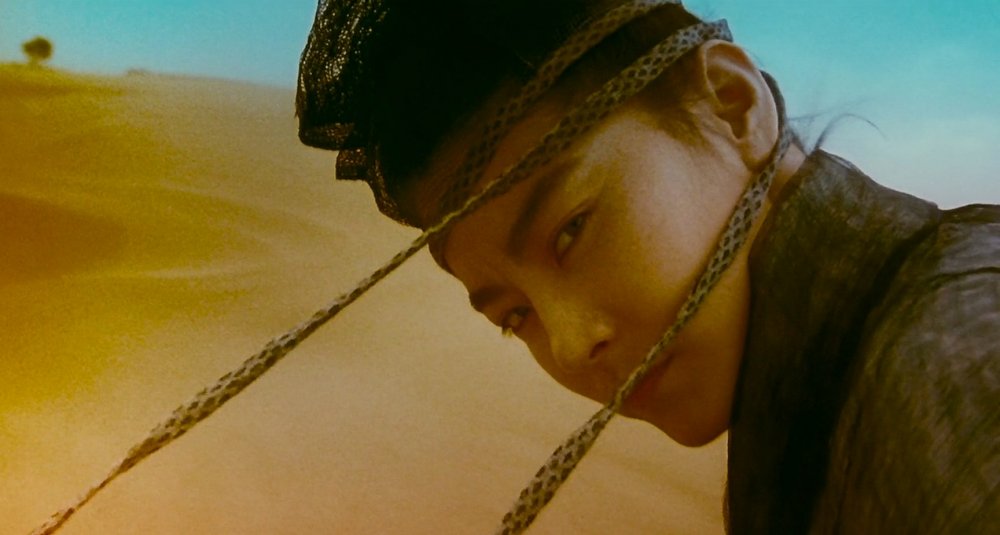 So protracted was the production period of Ashes of Time, that not only did Wong Kar-wai find time to produce Eagle Shooting Heroes, he also managed to squeeze a masterpiece into a break in editing in the form of Chungking Express (1994). He was still tinkering with the film a dozen years later, tightening and wholly reshaping his oblique epic into the blazing restoration of the more widely-seen redux cut.

A dazzlingly impressionistic ode to wuxia, it’s the most elliptical and narratively challenging of Wong’s films. Taking little from Louis Cha’s source novel beyond its solitary archetypes, Ashes of Time offers a temporally fragmented vision of lost loves, glinting blades and sand-blasted faces, all refracted through Wong’s singular prism of passion and longing. With fight sequences by the great Sammo Hung and jaw-dropping photography from Christopher Doyle, it’s a hyper-sensory, elemental trip of a film, grounded in genre and elevated in style. 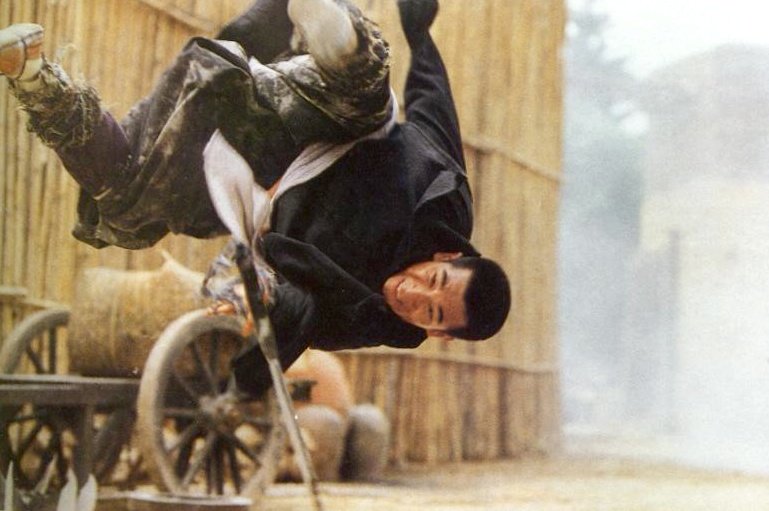 While he was as it long before the American upstart came on the scene, Tsui Hark definitely shares something with Tarantino in his contemporary retooling of genre cinema to his own singular specifications. The Blade is his grimy, brutal update of Chang Cheh’s One-armed Swordsman, clearly made in a bid to reclaim his wuxia crown from Wong Kar-wai in the wake of Ashes of Time.

Moonlit battles are fought with nightmarish abstraction through Tsui’s expressive lighting schemes, his free-wheeling camera and inventive PoV shots effecting something akin to a Raimi/Argento visual smoothie. Much like his earlier hat-tip to King Hu, it’s a world-view that The Blade borrows from Chang Cheh. The cynicism may belong to Chang, but the furious kineticism and blood-drenched insanity of the choreography are entirely Tsui’s. 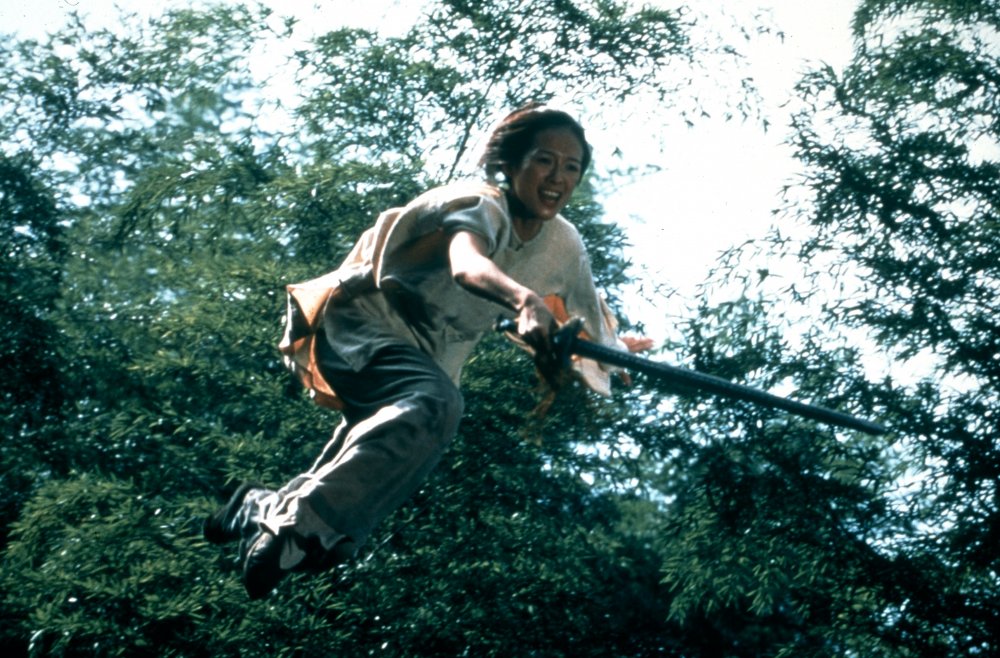 Despite the wealth of talent involved on both sides of the camera, there’s little escaping the fact that Crouching Tiger, Hidden Dragon is essentially the Titanic of modern wuxia cinema. An international co-production steeped in melodrama, it’s not that it’s inauthentic exactly, more that its machine-tooled for mainstream crossover appeal. Crossover it certainly did, winning four of it’s 10 Oscar nominations, even if it famously failed to set the box office alight with Chinese audiences.

There’s an undeniable elegance to Ang Lee’s direction even through the film’s amorous longueurs, and while the eyelid-threatening, pan-pipe moods of Dun Tan’s score often invite the occasional blackout, Yuen Woo-ping’s fight choreography is suitably timed to pull one back from the brink. Notable for its explicitly feminist take on the genre, there’s plenty here to enjoy, if little to trouble the crowns of the best of its antecedents. 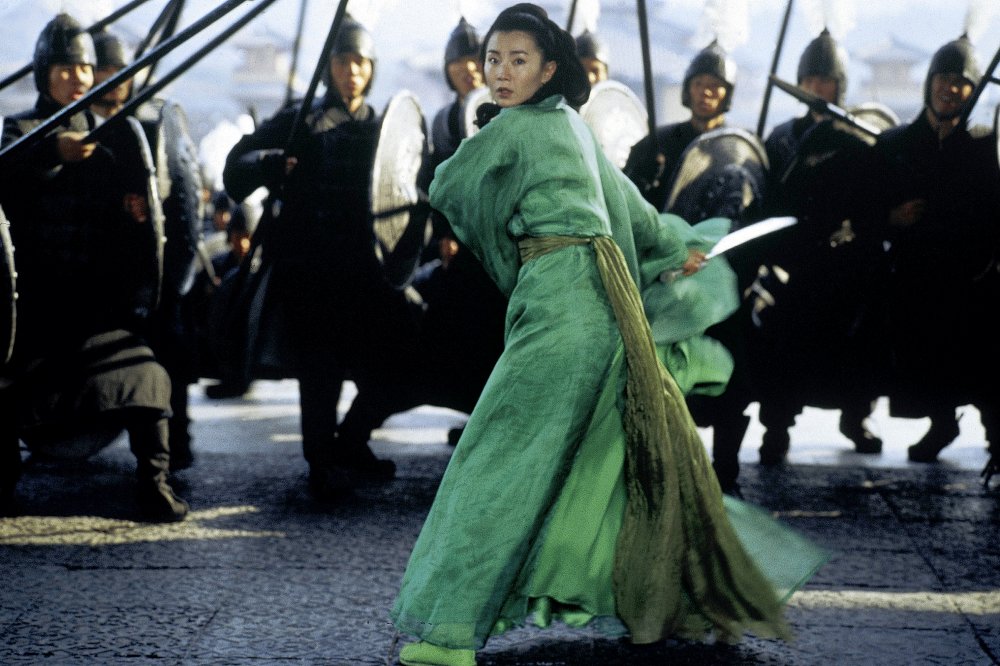 Zhang Yimou’s melancholic paen to wuxia and fabric conditioner is nothing if not immaculately crafted. Its colour-coded, Rashomon-style flashbacks setting the stage for a series of ravishingly photographed fight sequences (lensed by Wong Kar-wai regular Christopher Doyle) as sensuous as they are politically and psychologically motivated.

Yet there’s more to Hero than the immediate pleasures of its luxurious surfaces. Sporting an aesthetic rigour matched by the complexities of its Chinese-box narrative, it’s as steeped in ancient culture and philosophy as it is playful in its revisionist filtering of history through genre. Still, what surfaces! It may not finally be Zhang’s greatest achievement, but as a feast for the senses it sees him operating at the top of his game.