From Agatha Christie to Alfred Hitchcock, trains have always provided an exciting setting for a good thriller. All aboard for 10 of the best. 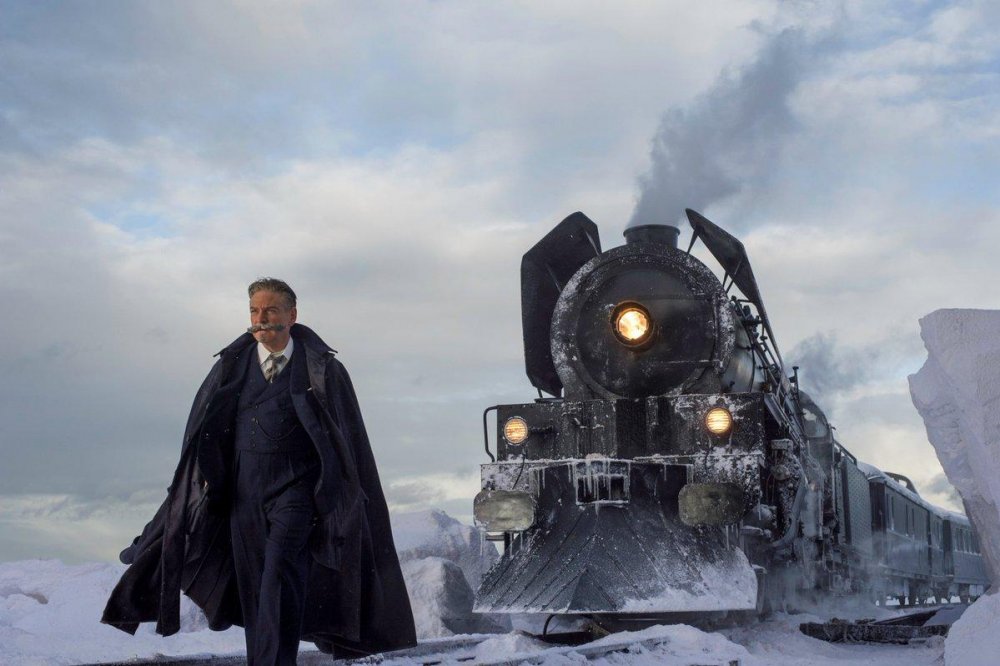 Ever since the earliest cinema audiences purportedly fled in fright at the locomotive rumbling into the station in an 1895 Lumière short, filmmakers have exploited the thrilling potential of trains.

The concept of confining characters in limited spaces, with few places to hide from menacing pursuers, works across the genres. But, while trains have frequently featured in westerns, horror, science-fiction and adventure films, they are particularly well suited to thrillers like Murder on the Orient Express, the Agatha Christie story that’s now pulling into cinemas in its second big-screen treatment.

The romance of the steam age may have passed, but trains remain as evocative as ever. Their carriages, dining cars and sleeping compartments provide the claustrophobic setting for conversations, subterfuge, chases and shootouts. Moreover, with their class distinctions, trains also serve as a microcosm of society, while reflecting the political realities of the day. Transcontinental trains take passengers across borders and into possibly perilous terrain, as police officers, soldiers and secret agents come aboard or prevent escape at busy stations.

This blend of the exotic and the ominous became a key facet of train pictures in the interwar years, as the hero and/or heroine debated whether to trust fellow travellers with foreign and familiar accents alike. In an age of terrorist atrocity, the stranger on a train remains a figure of suspicion, although, these days, on screen, they are just as likely to be a flesh-eating zombie as a treacherous spy. 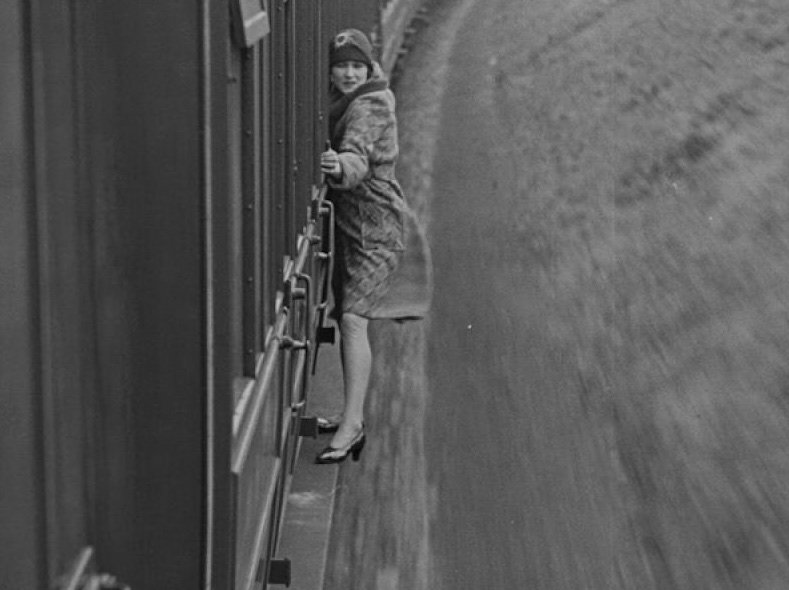 Designed by Sir Nigel Gresley, LNER Class A1 4472 – or The Flying Scotsman – is perhaps the most iconic train in British railway history. It was just six years old when it starred in Castleton Knight’s runaway train thriller, which was originally intended as a silent but had dialogue and sound effects added to its second half in March 1930.

The story concerns a stoker’s (Alec Hurley) attempts to sabotage a driver’s (Moore Marriott) last London-Edinburgh run before his retirement after the latter had reported him for drinking on duty. However, the driver’s daughter (Pauline Johnson) discovers the plot and boards the train to warn her father and his new assistant (a debuting Ray Milland), who had trysted with her the night before. Filmed on the Hertford loop line, the action is most notable for low-angle views of the speeding locomotive, the footplate close-ups and the daredevil shots of Johnson performing her own stunts in edging along the narrow running board in heels. 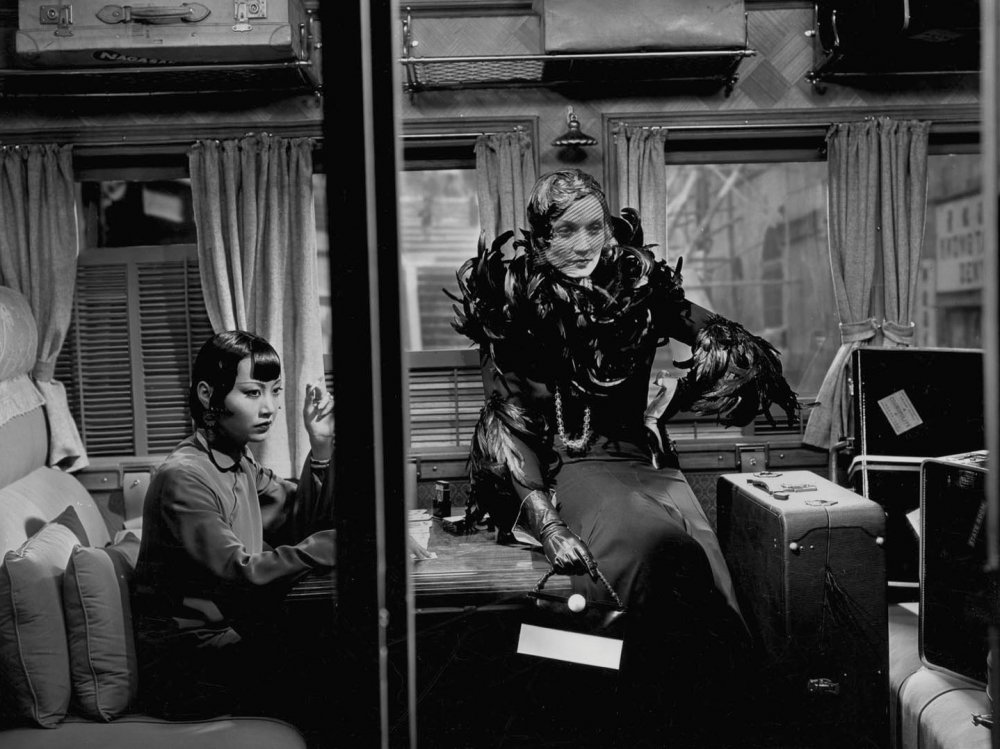 The fourth of Marlene Dietrich’s seven features with director Josef von Sternberg set the tone for train thrillers for the ensuing decade, gathering together a military doctor, two courtesans, a hypocritical missionary, an opium dealer, a gambler and a mysterious Eurasian businessman on the Peking to Shanghai express. Nominated for best picture, it also proved to be Dietrich’s biggest hit at Paramount. She plays “the notorious White Flower of the Chinese coast”, who seeks to protect fellow “coaster” Anna May Wong and ex-lover Clive Brook from ruthless rebel leader Warner Oland. 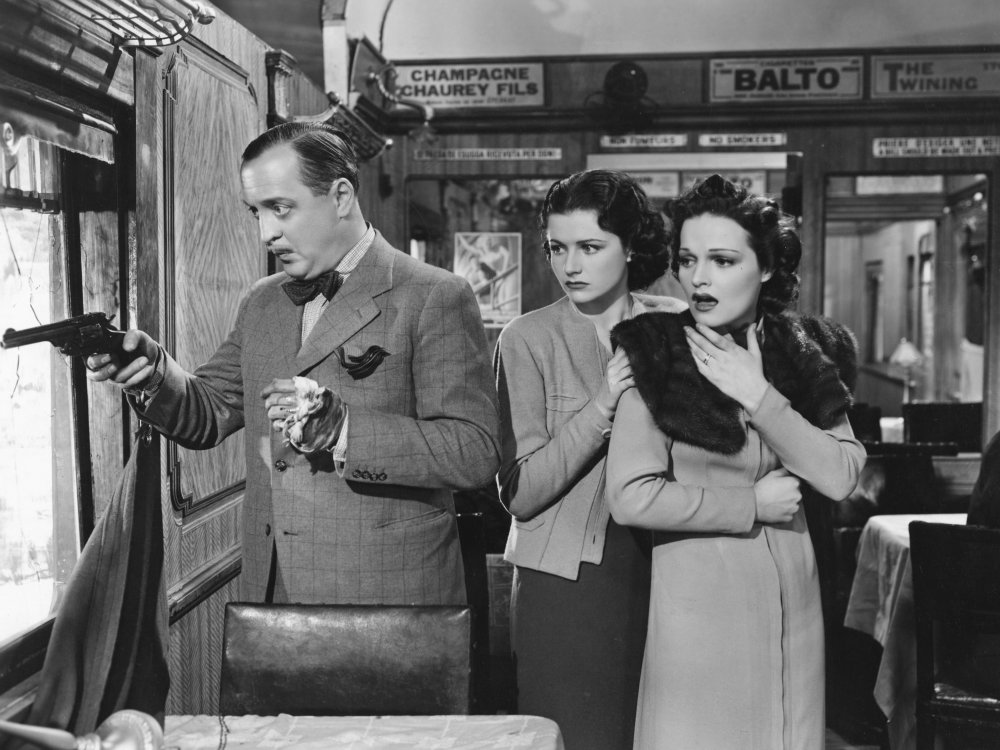 Trains had played a pivotal role in The 39 Steps (1935), and Alfred Hitchcock returned to the rails with this discreetly topical adaptation of Ethel Lina White’s novel, The Wheel Spins. Scripted by Frank Launder and Sidney Gilliat, with sly humour to heighten the suspense, it stars Margaret Lockwood as a bride-to-be who attempts to convince sceptical musician Michael Redgrave that fellow passenger Dame May Whitty has disappeared during a journey across central Europe.

Confining most of the action to the carriages, The Lady Vanishes also makes amusing use of the baggage car for a tussle with an Italian magician, whose escaped rabbits take cover in his top hat. Climaxing in a branch line shootout, this skirmish between foreign dastardliness and British fair play is made all the more mischievous by the similarity between villainous doctor Paul Lukas and British prime minister, Neville Chamberlain. The master of suspense also used trains to thrilling effect in Strangers on a Train (1951) and North by Northwest (1959). 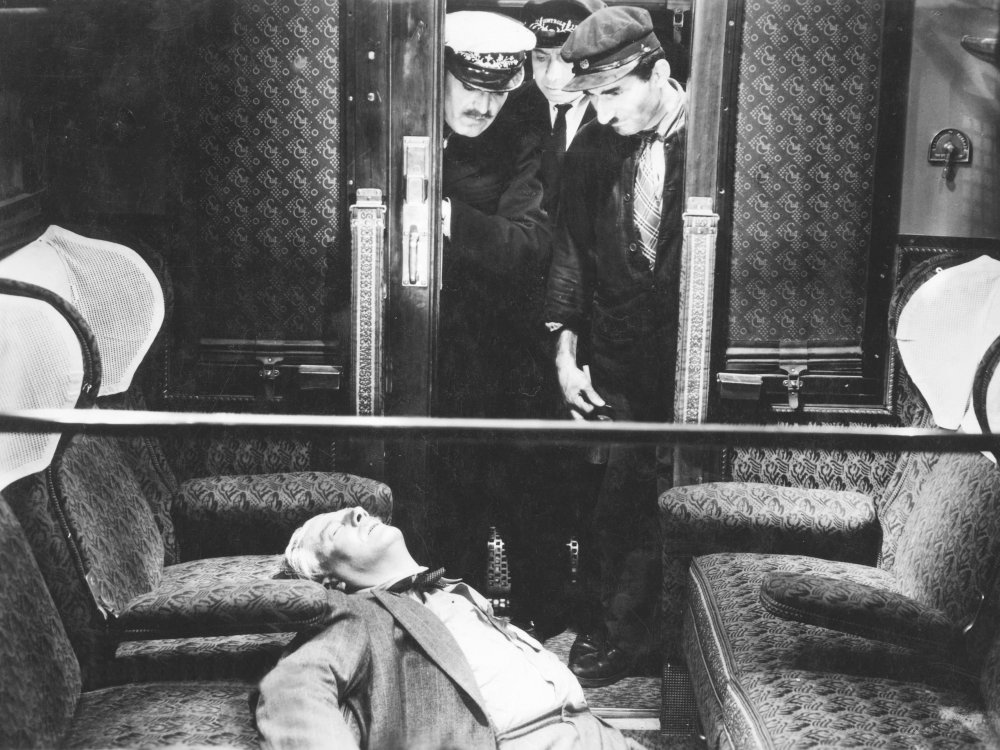 Jean Renoir agreed to direct this noirish adaptation of Émile Zola’s 1890 novel because actor Jean Gabin had always wanted to drive a train. In the resulting film, the French icon’s passion for steam is evident as his soot-caked face looks out from the footplate of La Lison, on her approach to Le Havre. Gabin plays a train driver so riven with lust for Séverine (Simone Simon) that he agrees to kill her husband, the deputy stationmaster.

The compartments and corridor of the train were built by production designer Eugène Lourié, but Renoir used authentic locations for the scenes in the marshalling yards and the cab. Indeed, his insistence on realism almost cost his cinematographer nephew Claude Renoir dear, as his camera was smashed while he clung to the side of a locomotive speeding into a tunnel. 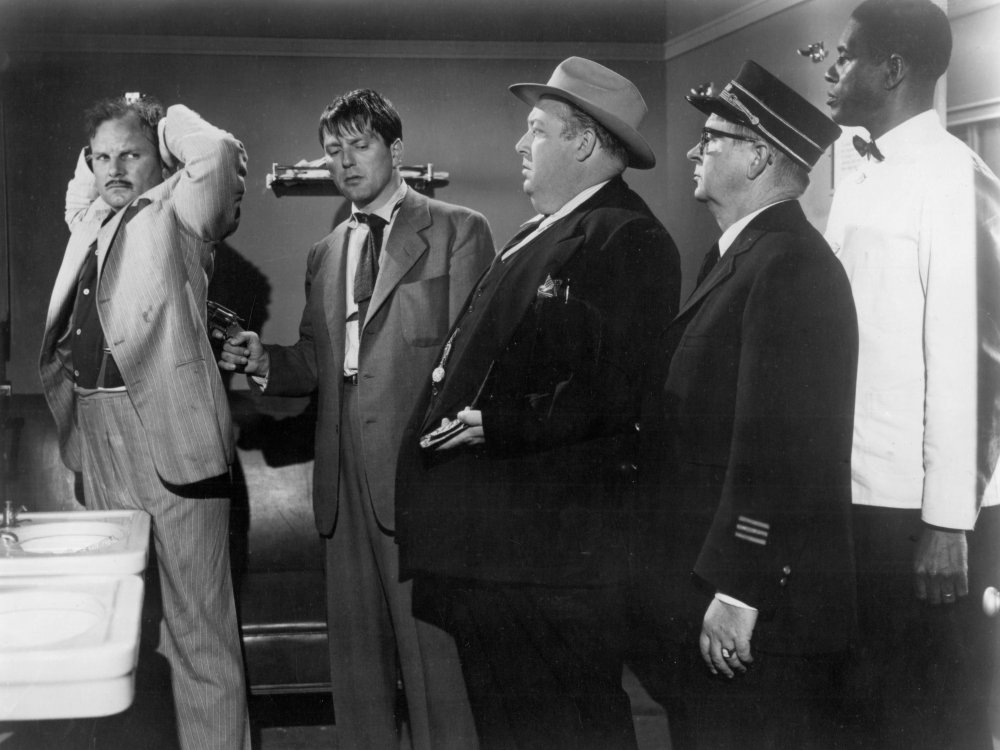 Made in 13 days for around $200,000, this B-movie noir ranks among the most profitable pictures in RKO’s history. It remains utterly compelling. Martin Goldsmith and Jack Leonard were Oscar nominated for a story that centres on a train trip from Chicago to Los Angeles and the efforts of an incorruptible cop to get a gangster’s widow on to the witness stand. However, the pair have been followed by hitmen, who are hamstrung by the fact that they have no idea what their quarry looks like.

Exploiting the claustrophobic setting to ratchet up the tension as the plot takes increasingly fiendish turns, director Richard Fleischer makes pioneering use of a handheld camera, with a washroom punch-up being particularly memorable. Equally innovative is the sound mix of clacking wheels, creaking carriages and wailing whistles, which prompted Fleischer to dispense with a score. 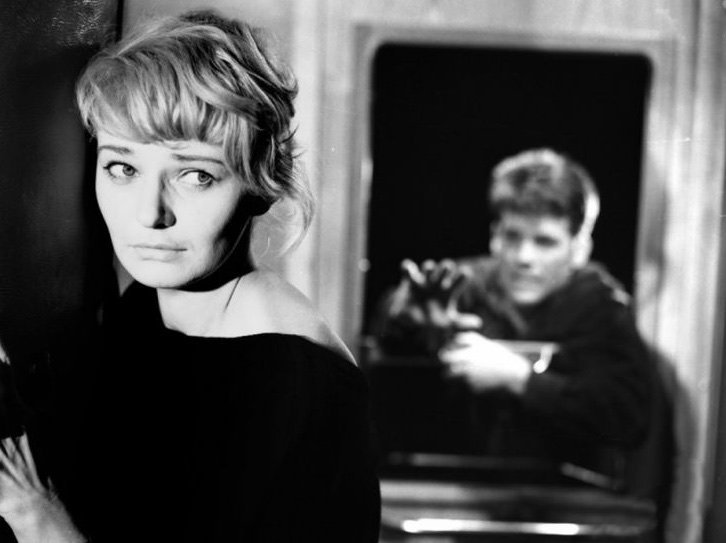 Jerzy Kawalerowicz conceived this allegorical thriller while commuting to see his future wife in a play on the Baltic coast. Plenty happens on the 200-mile journey between Lódz and the seaside town of Hel. But, while he toys with the conventions of the genre and Hitchcock’s concept of ‘the wrong man’, Kawalerowicz is less interested in the identity of the murderer than in the small gestures and expressions that enable humans to communicate. Along for the ride are a lawyer and his neglected wife, a pilgrim priest, a courting couple, the aloofly enigmatic Leon Niemczyk, his sleeping compartment companion (Lucyna Winnicka) and her jilted beau (Zbigniew Cybulski).

The standout sequence sees the passengers stream off the train to pursue the killer into a foggy graveyard. But the preceding shot is equally striking, as the camera glides along the corridors to convey how individuals come to acquiesce in a collective mentality. 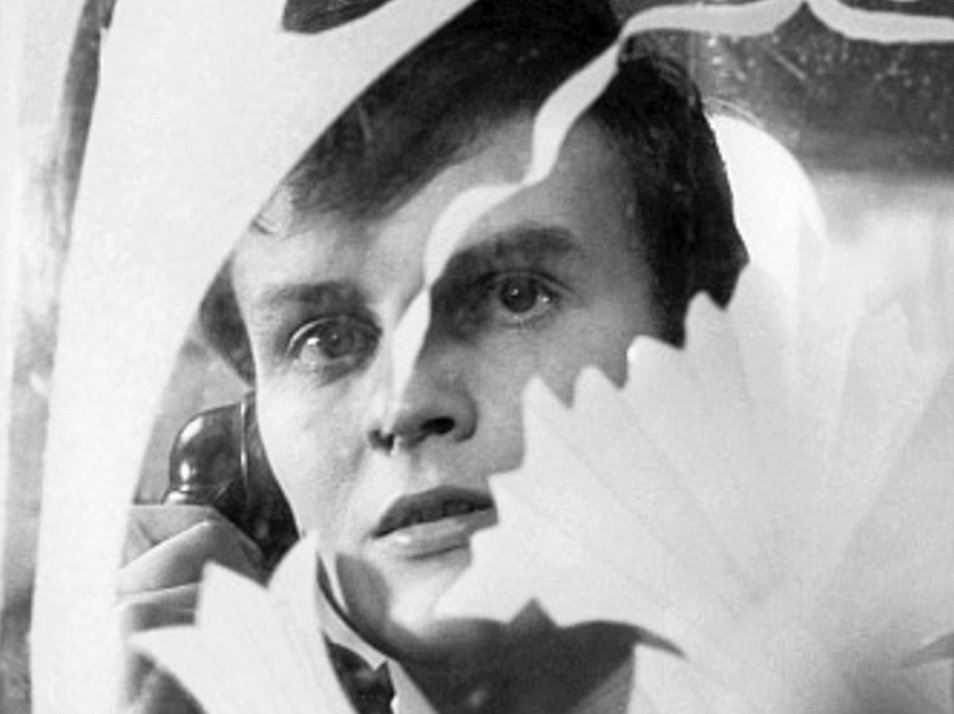 Imagine Murder on the Orient Express with Hercule Poirot schlepping around Paris to question his suspects and you get the gist of debutant Costa-Gavras’s voguish adaptation of Sebastien Japrisot’s policier novel. Only the opening scenes take place on the overnight service from Marseilles to Paris, and they’re confined to a corridor, a washroom and the cramped sleeping compartment into which a woman smuggles a stowaway after she boards the train at Avignon. Later, the death of a perfume saleswoman sets a police inspector (Yves Montand) on the trail of an actress (Simone Signoret), her lover (Jean-Louis Trintignant), a seedy office worker (Michel Piccoli) and a trucker (Charles Denner).

Culminating in a car chase to a twanging guitar theme, this twisting, noirish, parodic whodunit is more entertaining than exciting. But the brief series of close-ups as the characters are introduced while reclining on their bunks leaves one wishing that Costa-Gavras had lingered on the express a little longer. 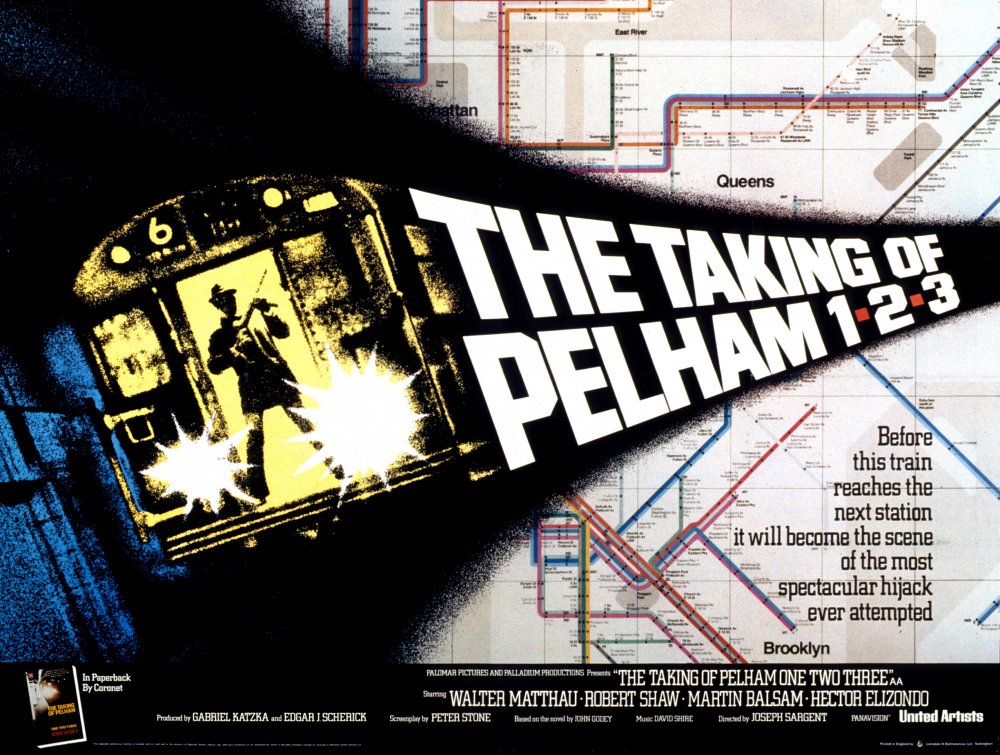 Long before Quentin Tarantino gave his characters colour-coded names in Reservoir Dogs (1992), Robert Shaw, Martin Balsam, Hector Elizondo and Earl Hindman adopted the respective Blue, Green, Grey and Brown monikers for their daring bid to seize an IRT subway train. Once on board, they threaten to start killing their 18 hostages unless the New York authorities come up with $1m.

The city’s Transit Authority was so unhappy with the plotline taken from a John Godey novel that it made the producers take out insurance against copycat hijacks. But no claims were ever made, perhaps because of the methodical manner in which cantankerous police lieutenant Walter Matthau anticipates the plan for an audacious getaway. Vastly superior to Tony Scott’s 2009 remake with Denzel Washington and John Travolta, the original tempers the breakneck action with psychological insight, civic satire and a mordant wit – encapsulated by Matthau’s begrudging use of the word ‘gesundheit’ whenever Mr Green sneezes. 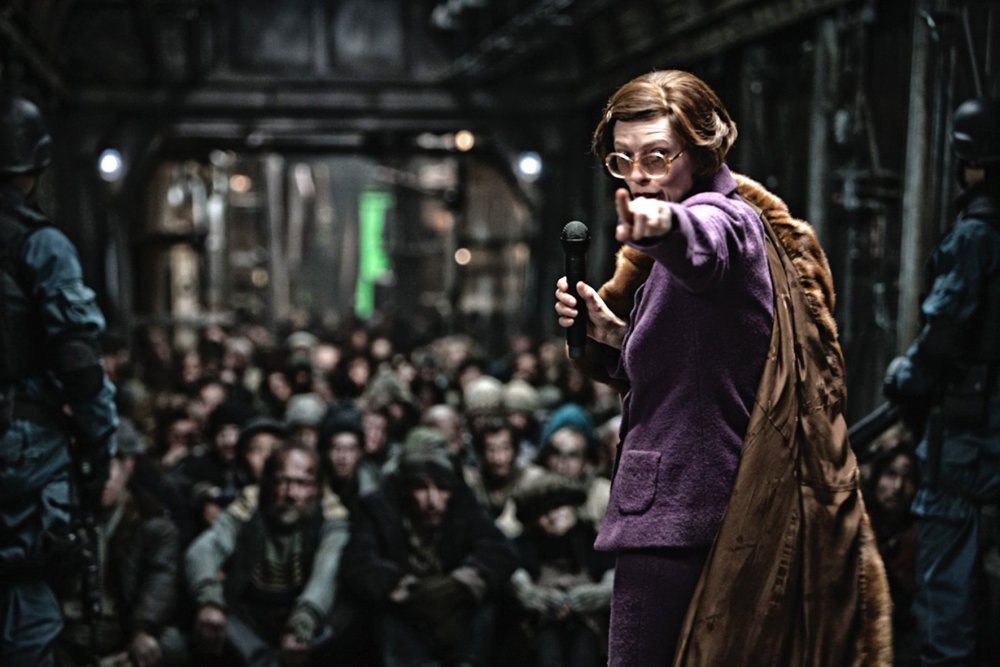 South Korean filmmakers have a thing about train thrillers (see also 2016’s Train to Busan), and this adaptation of the 1982 graphic novel Le Transperceneige feels like Bong Joon-ho has crossed Metropolis (1927) with Runaway Train (1985). In a frozen future caused by a failed bid to halt global warming, Earth’s surviving humans live on an enormous train circumnavigating the glacial planet. A group of caboose mutineers begin to pick their way through the carriages to challenge the train’s dictatorial inventor and his minions.

Built by Ondrej Nekvasil on a gyroscopic gimbal at Barrandov studios, the train sets are simply magnificent – it’s easy to see why John Hurt’s character is called Gilliam. But, as a rebel leader (Chris Evans) and an embittered security expert (Song Kang-ho) pass from squalor to luxury, Bong prevents the action from becoming like a video-game quest through his restrained pacing, sly humour and a considered examination of human nature in extremis. 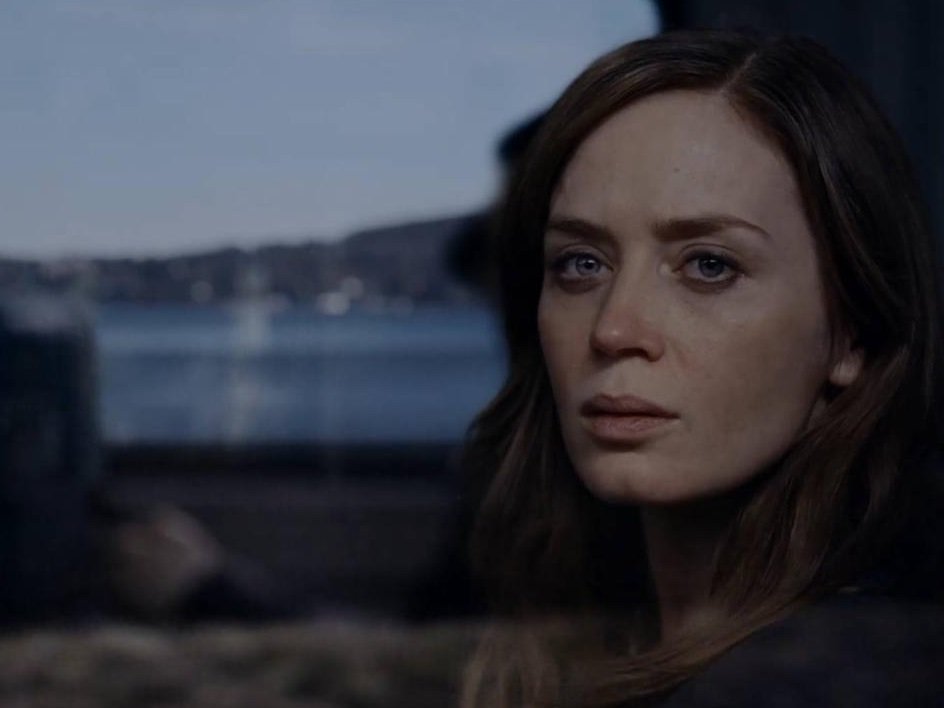 Proving just how difficult it can be to bring a bestseller to the screen, Tate Taylor’s take on Paula Hawkins’s feminist noir disappointed many critics. Yet Emily Blunt’s ordeal on the stopping service from New York’s Grand Central Station into the Hudson Valley commuter belt continues a tradition of female passengers seeing untoward events from train windows. Think of Deanna Durbin’s whodunit-obsessed heiress and Margaret Rutherford’s Miss Marple respectively witnessing murders in Lady on a Train (1945) and Murder, She Said (1961) – the latter adapted from Agatha Christie’s 4:50 from Paddington.

By contrast, Blunt is disconcerted by a kiss on a balcony that destroys a vision of domestic bliss – like the happiness she lost after she hit the bottle on failing to conceive. A hint of the old gaslight comes to shroud proceedings, as Blunt starts struggling to cling on to a confused reality that’s slipping through her fingers.