Dream your way back to the golden age of screen romance with these classic silent-era love stories. 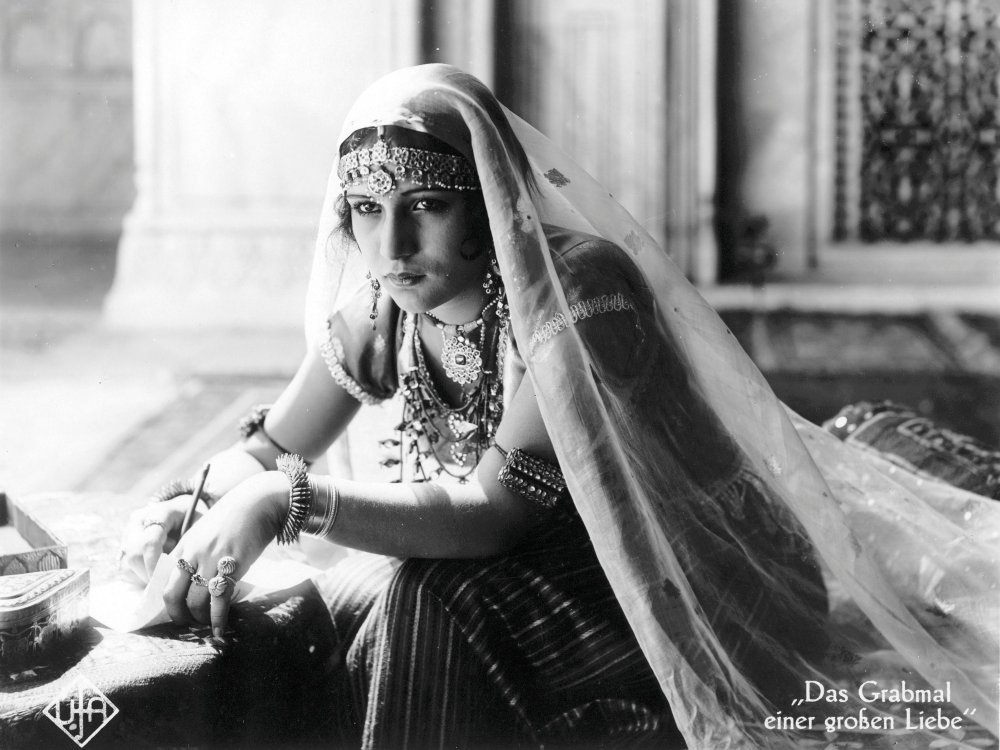 Shiraz: A Romance of India, newly restored by the BFI, is back in cinemas from 2 February 2018

The 1920s were a halcyon age for on-screen romance. The development of the feature film in the 1910s had given directors room to tell more complex stories, with sweeping emotional arcs. Film stars were becoming ever more glamorous, too, celebrated and swooned over in the fan magazines. And it’s no coincidence that film audiences at this time were mostly female. The cinemas were full of women who had bought their tickets to enjoy a night filled with passion, longing and charisma – a date with a dream lover.

In fact, the prestigious romantic costume drama so defines a certain strand of 1920s Hollywood that 1952’s Singin’ in the Rain spoofed it mercilessly at the beginning of its hymn to the dawn of the talkies. That’s not to say there weren’t parodies of silent romance at the time, nor plenty of other jokes made at the heaving bosoms and chiseled heroes of this particularly gorgeous, and very popular, genre. It was a formula that could be exported too, as 1928’s Indian- British-German co-production Shiraz demonstrates. The template of beautiful lovers, luxurious locations and deep, swelling emotions is very familiar, even if the setting of that film, the 17th-century Mughal empire, is among the most exotic.

There’s more to silent romance than glamour, though. As these examples show, love films made the most of the unique pleasure of silent cinema: the wordless connection between the viewer in the dark and the star, shown in intimate close-up on the big screen. In those precious moments “I love you” became words best left unspoken. 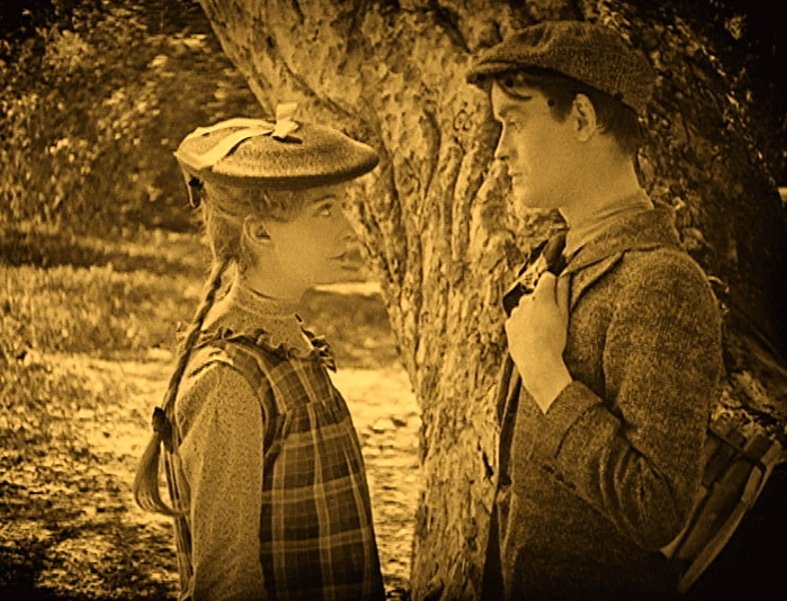 For D.W. Griffith, and many of his fellow directors in the 1910s, Victorian values held sway over romance. Heroines were virtuous (and often passive and frail), and love outside marriage was chaste. In this rural romance, subtitled, “The story of a plain girl”, Lillian Gish plays a winsome young woman so devoted to her village crush, played by Robert Harron, that she makes sacrifices for him in secret. Sadly the handsome dope is caught in “the net of paint, powder and suggestive clothes” and Susie must wait patiently while he marries a giddy, gaudily dressed young woman who, shockingly, can’t even cook.

It takes time, and tragedy, but eventually he’ll learn to see the worth of sweet Susie and the error of his former ways. Saccharine? Pious? Maybe, but Gish’s performance as Susie is so sincere, both comic and tragic, that it would take a heart of stone not to hope for her happy ending. 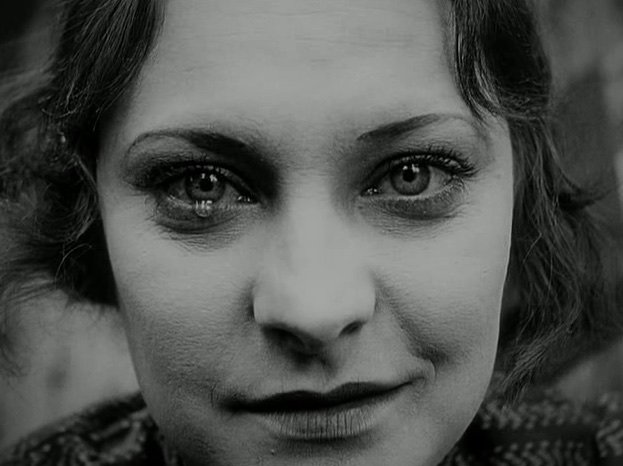 Over in France, a more realistic, not to say cynical, take on romance. In this beautifully impressionistic and elliptical film directed by Jean Epstein and set in Marseille, orphan Marie (Gina Manès) and dockworker Jean are in love, but must be parted, when she is forced to marry the bullying Petit Paul (Edmond Van Daële). While their hearts remain faithful, their lives are scarred by brutality and violence – and more blood must be spilled before they can be together again.

Epstein, a film theorist as well as director, rejected the trappings of romance, and planned Coeur fidèle to be “so sober, so simple, that it might approach the nobility and excellence of tragedy” instead. His patterns of rhythmic edits and poetic superimpositions betray the influence of Abel Gance, and he often shoots his actors looking directly at the camera. The result of his sophisticated approach is a film that appears emotionally raw – love in the rough. 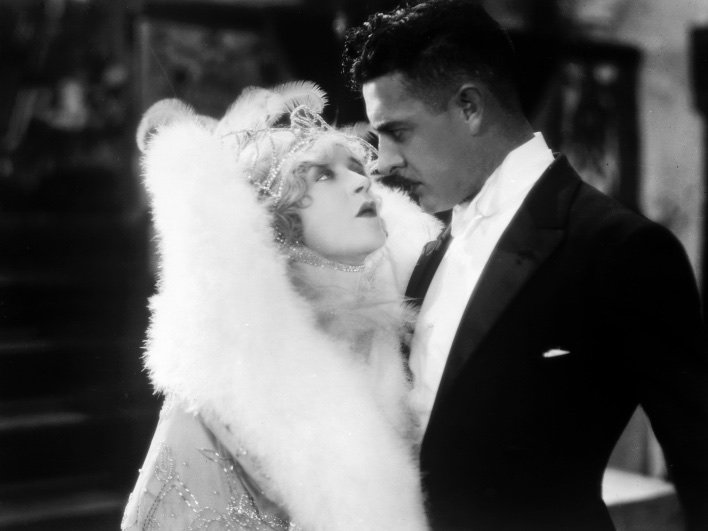 This Hollywood adaptation of a popular operetta is an apparently light romantic confection, but one with a dash of spice. One of silent Hollywood’s most dashing male stars, John Gilbert, plays the prince, while Mae Murray, the “girl with the bee-stung lips” plays the showgirl whom he loves, but must renounce for the sake of his royal blood.

Renowned on-set tyrant and bane of the front office Erich von Stroheim directs, which means that this film is not just incredibly lavish, but also a little seedy. It also means that Murray, under his strict orders, turns in her best performance – more subtlety than shimmy, for once. While it may seem tame now, The Merry Widow reflects a growing appetite for racier fare in the early 1920s: films that were a little more candid about sex and marriage. It was a demand provoked by the more adult films coming over from Europe, and Austrian-born actor-director Von Stroheim was happy to supply it. 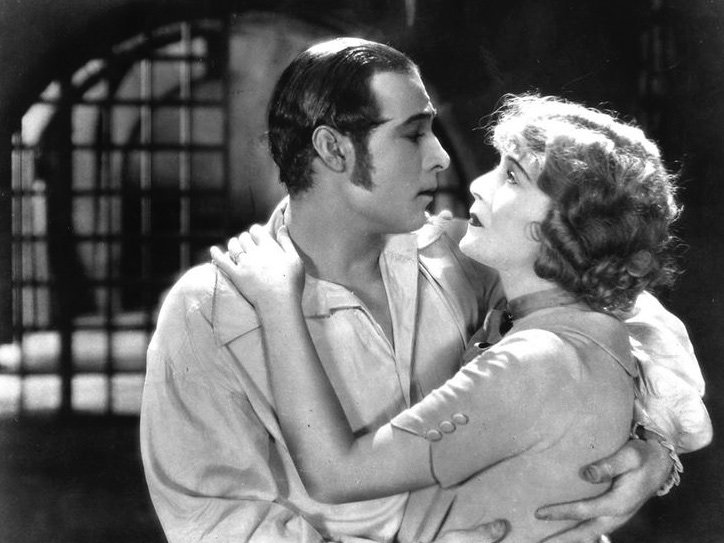 In the mid-1920s, Italian dancer-turned-actor Rudolph Valentino was the number one male pinup. He made his name tangoing suggestively in The Four Horsemen of the Apocalypse (1921) and became a star with The Sheik (1921), but arguably it’s The Eagle, directed by Clarence Brown, which shows him at his most romantic, rather than just sexy. Perhaps that’s because the Great Lover is occasionally allowed to engage his sense of humour as well as his smouldering eyes.

In this Pushkin adaptation, Valentino plays Vladimir, a Russian soldier selected for Queen Catherine’s boudoir. He rejects the Czarina, and is forced to flee, but he returns to Russia in disguise as the Black Eagle, seeking revenge and the woman he loves (Hungarian Vilma Bánky). Valentino, decked out in distractingly large sideburns, reveals his playful, charming side, in this plush costume drama, now as celebrated for an extended tracking shot of a heaped banquet table as for the chemistry between the two leads. Valentino would partner with Bánky again for his biggest hit, 1926’s The Son of the Sheik. 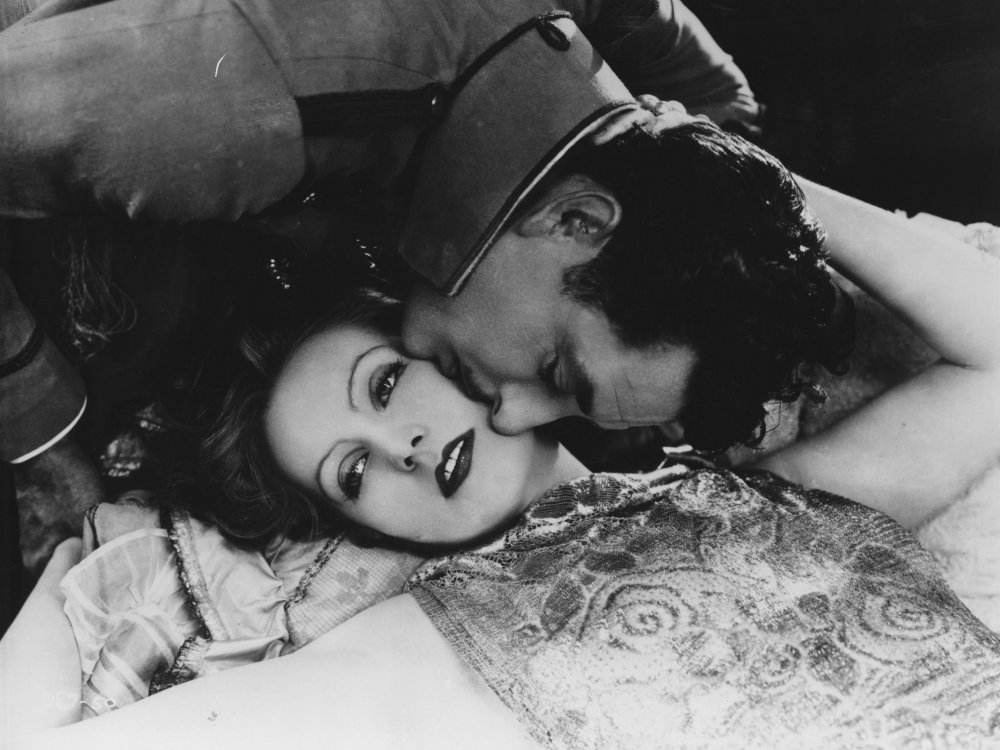 Clarence Brown also directed this classic romance, which places another imported European star, Greta Garbo, at the centre of a love triangle. Garbo plays a mysterious woman, ironically named Felicitas. First she has an affair with Leo (John Gilbert), and then, when they are separated, she transfers her affection to his best friend, Ulrich (played by her fellow Swede Lars Hanson).

Will their friendship survive their mutual love for the same, dangerous woman? Could such a temptress be allowed to prosper? Needless to say, MGM had to shoot two endings to please everyone. Gilbert and Garbo, lovers off-screen as well as on, share a daringly horizontal love scene here – but it was their shared cigarette in a moonlit garden that sent the audience’s hearts racing. As Gilbert and Garbo get to know each other in the dark, his match suddenly illuminates her otherwise inscrutable face, as if his ardour has brought her to life, or at least inflamed her passion. 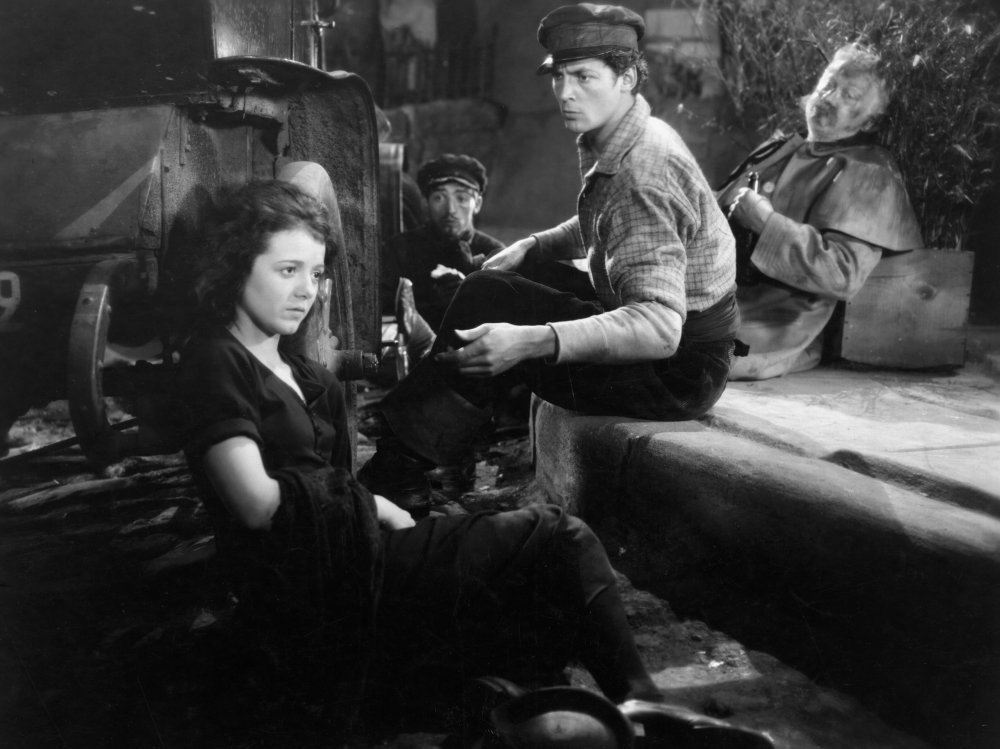 Director Frank Borzage’s vision of love was poetic, and often celestial, and his favourite theme was young lovers weathering adversity. This celebrated love story, based on a Broadway play, stars Janet Gaynor and Charles Farrell, and is set in one of Hollywood’s favourite romantic settings – the garrets and gutters of Paris.

Gaynor plays Diane, a put-upon waif, and Farrell is Chico, a born optimist with the catchphrase “I’m a very remarkable fellow” who works in the sewers by day but spends his nights in “seventh heaven” – his attic apartment where he can feel close to the stars. Their romance, and dream of domestic bliss, is interrupted by the war, but the two share a mystical, telepathic connection throughout their separation. In this beautifully sincere film, and especially in its remarkable conclusion, love is presented as nothing short of a miracle. 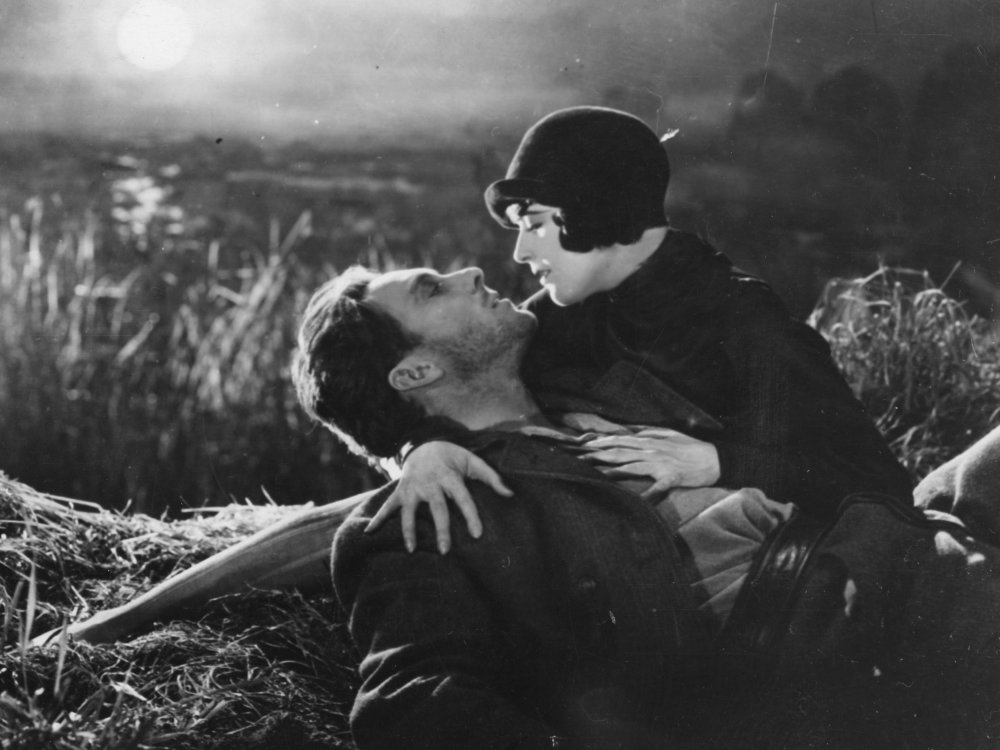 Janet Gaynor won the first best actress Oscar for her performance in 7th Heaven, another Borzage film, Street Angel, and this masterpiece by German director F.W. Murnau. Fox had lured the filmmaker to Hollywood with the promise of extravagant budgets and creative freedom. His first American film tells a small story on a very big scale. George O’Brien plays Gaynor’s husband, a farmer whose head is turned by a vamp from the city (Margaret Livingston). The seductress outlines her plan: the farmer should kill his wife so they can sell the farm and make a new life together in the city. But surely he can’t really drown his fragrant and trusting wife?

Murnau’s film is rightly celebrated for its gorgeous technique and incredible cinematography (by Charles Rosher and Karl Struss), but it deserves its place on this list because it presents a twist on the classic romantic narrative. Sunrise offers a story not about sweethearts but about a married couple falling back in love with each other, even if they have to face disaster and travel far from home to do so. 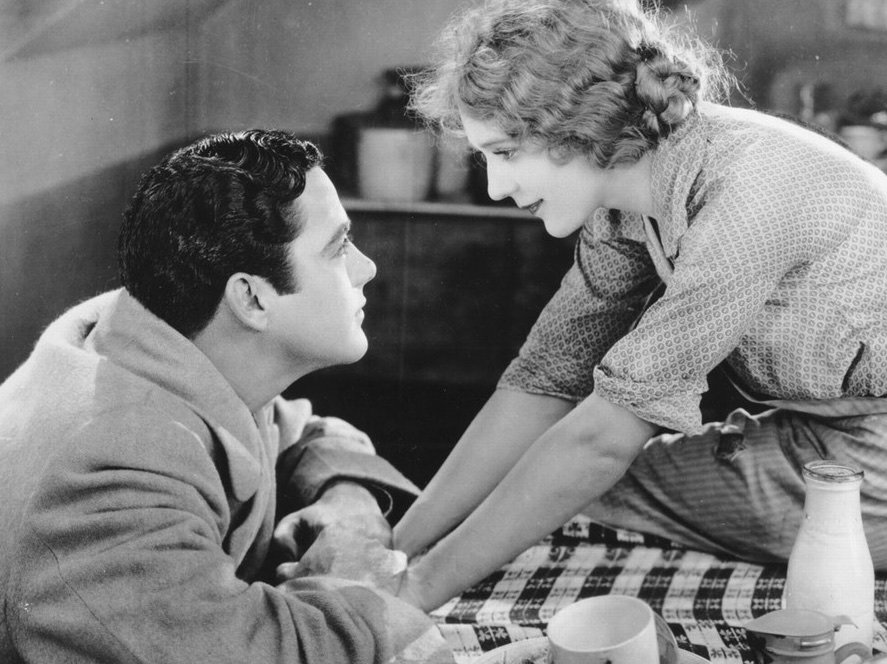 Mary Pickford is best remembered for playing youngsters in the 1920s, but this romcom, made late in the decade, offers her a more grown-up love story. It also shows her falling for co-star Charles ‘Buddy’ Rogers, who would become her third husband, on screen. Directed by comedy specialist Sam Taylor, this delightful film is set in a department store and details a romance between hapless stock girl Maggie (Pickford) and new employee Joe (Rogers). What Maggie doesn’t know, as she teases and flirts with Joe, is that he’s really the son of the store’s owner, doing a stint on the shopfloor before inheriting the business. Crossed wires and class differences keep the lovers guessing as to each other’s true motivations until the touching finale.

My Best Girl was released a few months after the saucier but similar department store comedy It, starring Clara Bow, but Pickford and Rogers’ winsome flirtation in a cardboard box makes this one the more romantic of the two. 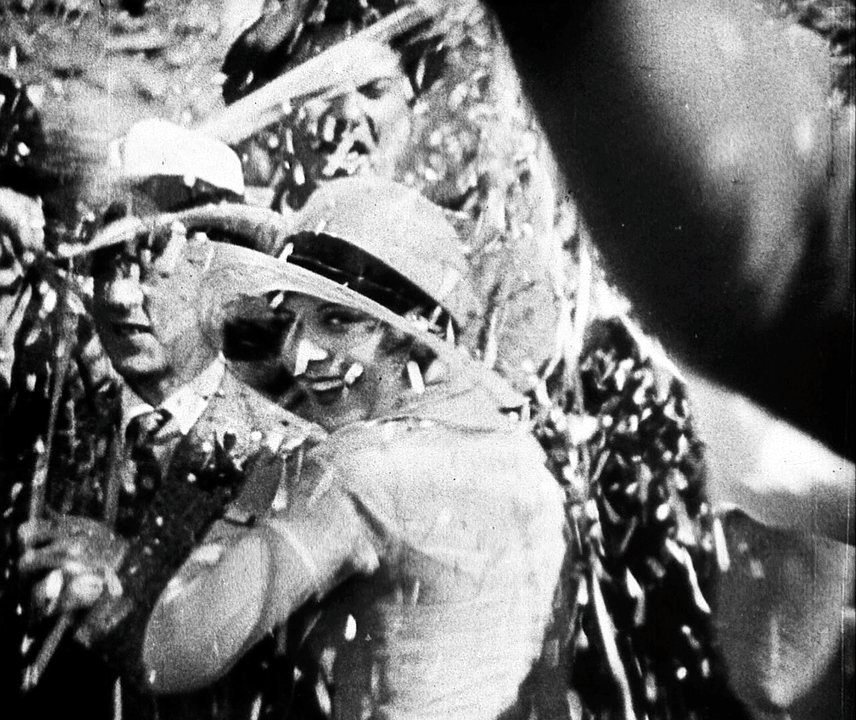 Another tale of love in the big city, this New York romance brings two lonely urban singletons together for a day of pleasure at Coney Island. It’s a far cry from the archetype of lush costume dramas, as the anonymity of the city crowds keeps the lovers apart and alone. Barbara Kent and Glenn Tryon play the two leads, Mary and Jim, and Hungarian Paul Fejös directs, creating a film that is a hybrid of romantic drama and city symphony.

Hand-applied colour effects and inserted ‘talkie scenes’ now appear less sophisticated than the rest of the film but speak to its ambition, which goes beyond telling a love story to making a comment on the modern age. Paradoxically, in the thronged streets, busy workplaces and cheek-by-jowl living quarters of an early 20th century, Lonesome argues that it can be harder than ever before to meet the love of your life. Fate throws Mary and Jim together, but can they ever find each other again? 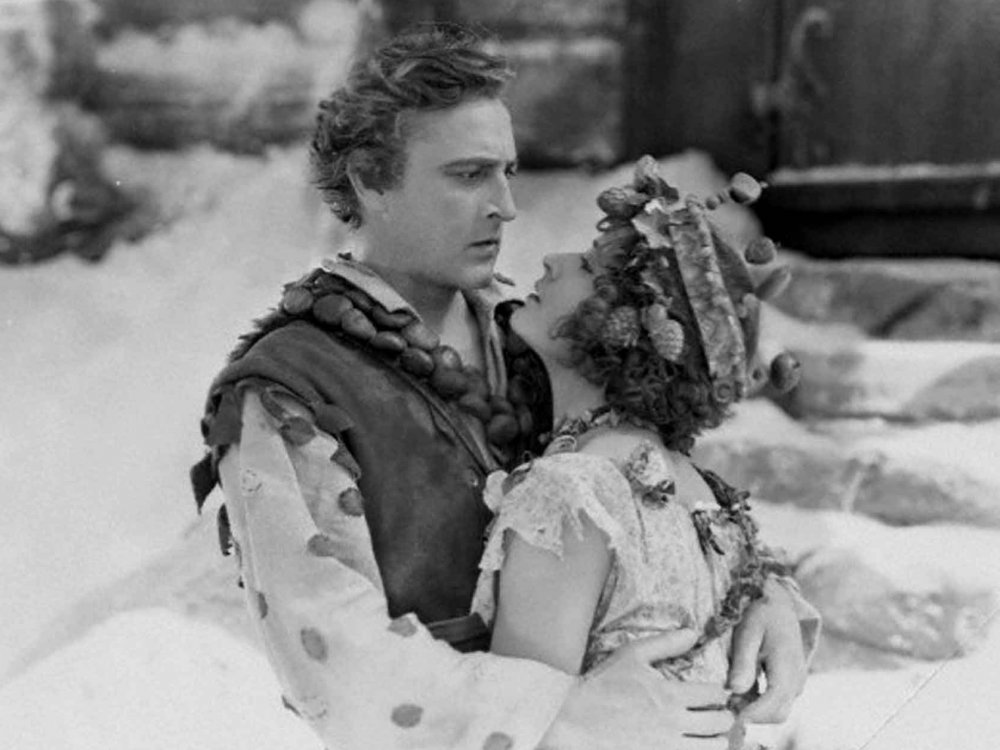 You can’t talk about love films in the 1920s without getting to German master Ernst Lubitsch, who brought his brand of carnal, comic romance to Hollywood at the beginning of the decade. Neither could we miss out John Barrymore, stage thespian who became one of the screen’s great lovers, thanks to his talent, charisma and perfect profile. They collaborated on 1929’s Eternal Love, with German actress Camilla Horn as Barrymore’s co-star.

This is an epic love story, set in early 19th-century Switzerland. Barrymore plays Marcus, a hunter living on the outskirts of a village occupied by the French. He’s in love with the local reverend’s niece Ciglia (Horn), but a series of misunderstandings and schemes find them married off to other people. The thwarted lovers share an intense passion, yet the odds are stacked against their happiness, and in the film’s heart-stopping avalanche finale, they choose to be together at all costs.