Found footage films. Collage films. Remixes. Call them what you will. Paul Wright’s pagan mashup Arcadia is just the latest example of a film that samples and re-edits existing footage to create something dazzlingly new.

Arcadia, backed with National Lottery funding via the BFI Film Fund, is in cinemas from 21 June 2018

Like musical sampling, the magpie business of appropriating old film can been used to subvert, comment on or otherwise re-contextualise pieces of media we might otherwise take for granted.

At the movies, this process goes back at least as early as 1936 with Joseph Cornell’s short film Rose Hobart, which re-edited and re-scored the 1931 B-movie East of Borneo. Cinematic sampling was then taken up by the collagists of the avant-garde, before hitting the modern mainstream through the internet and the phenomenon of meme culture.

Arcadia, the second feature by BAFTA-nominated filmmaker Paul Wright, is constructed from 100 years of archive footage to create an exhilarating study of the British people’s shifting and contradictory relationship to the land. Offering a visceral journey through the seasons, it manipulates footage once intended to educate, inform or simply document rural traditions, subverting it into a portrayal of the landscape that verges into Wicker Man-esque nightmare.

In cinemas from 21 June, Wright’s pagan mashup joins a rich history of films that build on top of existing media. Whether you want to call them found-footage films, collage films, metamedia or remixes, here are 10 to cue up if Arcadia has you wanting more. 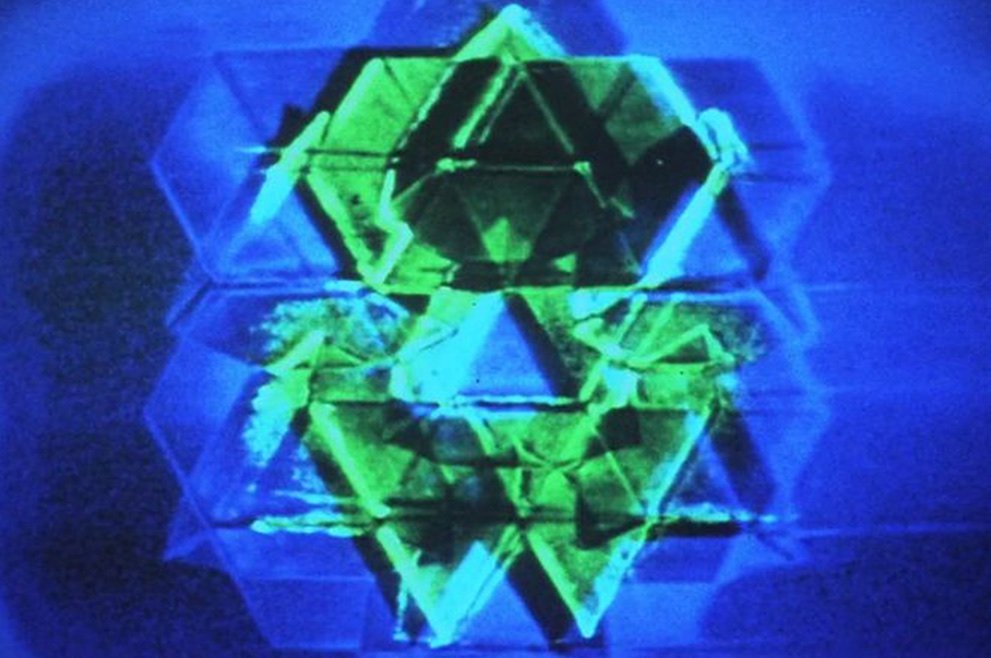 Moving image artist Anne McGuire’s re-edit of Robert Wise’s 1971 sci-fi classic The Andromeda Strain reconstructs the entire film in reverse, shot-by-shot, so that the last shot appears first and the first shot appears last. This isn’t a straightforward case of running the film backwards. Each individual shot plays out normally. Instead, simply reversing the order of sequences creates something that’s nonsensical at first, but which slowly reveals the plot like an elaborate filmic jigsaw puzzle.

Often described as “disaster deconstruction”, Strain Andromeda The examines the nature of both crises and narrative by beginning with a climax and incrementally revealing the stages that led up to it. Viewing the story in this way forces the audience to piece together the fragments of what came before and then reconstruct the narrative conventionally inside their own head. It’s an experience not dissimilar to watching Memento (2000), though McGuire’s film preceded Christopher Nolan’s by nearly a decade.

The choice of source material is perfect, as seeing meticulous scientific processes acted out in reverse, only to grasp the full context at the end (beginning?) of each scene makes for strangely compelling viewing.

No list of found footage films would be complete without mention of American avant-garde filmmaker Bill Morrison, who goes above and beyond the ‘found’ aspect to mine for some of the most obscure and forgotten film materials in the world. Decasia is composed from the remnants of decaying early nitrate footage, shot pre-1950, that has warped, obfuscated and sometimes outright destroyed the original image. Set to a haunting score by Michael Gordon that seems to constantly descend, Decasia creates a tone poem of imperfect and disappearing memories.

As one reviewer said upon release: “Decasia is the Fantasia of decay”. There is a magical and hypnotic quality to the footage Morrison assembles, at its height when the films themselves seem to be aware of the decaying aurora around them: a boxer fighting with a monolith of melted film, a dancer wrapping her arm around a vague shape of dots and scratches, children turning scared to camera as the edges of the frame collapse and envelope them.

From this it would be easy to read Decasia as an evocation of loss and death, however as Morrison has said himself, you’re also viewing things that, despite all odds, have managed to survive in one form or another. So Decasia’s message may be more optimistic than it seems.

Originally completed in 2004 but only made available online in 2016, Of Oz the Wizard is another highly conceptual remix that alphabetises and re-orders every line of dialogue from The Wizard of Oz (1939). Created by coder Matt Bucy as the result of a challenge posed by a friend, it was partly achieved by using an app to isolate each line. As Bucy said in one interview: “Basically, it was edited in Excel.”

A profoundly dizzying experience, the film works as a meditation on language through repetition, demonstrating how bizarrely arbitrary words can seem when isolated from context. It also creates a compelling sense of rhythm, with snippets of the iconic melodies intermittently punching through to provide a sense of energy. All this elevates Bucy’s film from being a standard supercut to something far more compelling and surreal.

Visual artist and musician Christian Marclay has been innovating uses of appropriated media for decades, from early turntablism and plunderphonics to album cover collages and film mashups. His 2010 installation piece The Clock, probably his most impressive and ambitious work to date, is a 24-hour montage of clocks taken from thousands of films and TV programmes, edited together and looped to create a real-life working clock. The film is synced to real-world time, so viewing the film twice at different times of day results in entirely separate experiences.

Marclay has stated that the piece is a meditation on the nature of time, drawing the audience’s attention to the present passing of time by assembling fragments of the past. Narrative threads from films and TV shows are teased in and disrupted, constantly reminding you of what time it is, how long you’ve been there, essentially watching time go by. If you were to simply sit and stare at a clock on a wall then time would seem to pass agonisingly slowly, but to sit and watch The Clock makes that same idea feel incredibly engaging. It demonstrates how subjective perceptions of time can be.

Anyone with an enthusiasm for found footage may already be aware of the online video collective Everything Is Terrible!, who mine thousands of old, strange VHS tapes to create surreal, hilarious and sometimes terrifying re-edits of video material that was once thought lost to the digital age. They’ve been uploading shorts to the internet for years, but have also taken several forays into feature filmmaking. The most accomplished of these is Doggiewoggiez, Poochiewoochiez!, which edits together nearly 3,000 films of dogs – from Hollywood films to amateur home movies – to recreate Alejandro Jodorowsky’s surreal masterpiece The Holy Mountain (1973). If that sounds like a trip, rest assured: it is!

For sheer absurdity and the well-constructed timing of jokes made through editing, this is the most laugh-out-loud funny of all the films on this list. One particular highlight is a montage of bad dog puns (see below), which proves the EIT team masters of their craft in turning the unwatchable into something completely re-watchable.

In a similar vein to Arcadia, Penny Woolcock’s collage film From the Sea to the Land Beyond uses over a century’s worth of footage from the BFI National Archive to draw out Britain’s multilayered and changing relationship to its coastline. Incorporating a moving soundtrack from British Sea Power, Woolcock groups together footage ranging from sunbathers and holidaymakers, to shipbuilding, fishing and even the armed forces to create a mood piece that revels in the romanticism of the British coast.

Creating a lyrical portrait of our pastimes and industry, in a mood that ranges from joyous to tragic, From the Sea to the Land Beyond is an incredibly heartfelt remix film. Rather than overtly recontextualising its source material, instead it arranges archive clips to tug deeply at feelings of nostalgia, leaving you pining for an idyllic idea of the coast that feels very real, even if it never existed.

A movie for movie-lovers who love movie-loving movies. Created by Paul Anton Smith, a long-time collaborator of Christian Marclay and assistant editor on The Clock, Have You Seen My Movie? assembles and weaves together hundreds of film scenes set in movie theatres. Smith reconstructs these scenes as though they are all taking place in one universe-colliding cinematic plane of existence, creating the idea that the whole of cinema itself has met for a night at the movies.

Very much a film about watching films, Have You Seen My Movie? evokes all of the romantic ideas about the space of movie theatres. Characters from different films appear to acknowledge and interact with each other, and Smith is able to construct surprisingly compelling narrative threads and unique moments out of wildly differing material. As Smith has said: “This may be the most romantic, dramatic, suspenseful, action-packed movie whose protagonists are, for the most part, totally sedentary.”

Belgian artist David Claerbout’s take on the 1967 animated classic The Jungle Book accomplishes the amazing feat of removing all people and anthropomorphism from the original film. Through digitally editing and redrawing frames, Baloo, Bagheera and all of the other memorable animals now behave like, well, animals. Mowgli has been completely removed, there’s no narrative, and certainly no musical numbers (except for one song included right at the end). Instead there are only the tranquil movements and sounds of an animated jungle.

An extremely soothing and novel experience, which at times feels like watching an animated version of a Godfrey Reggio or Ron Fricke experimental documentary. By design the film contains very little action, creating a Zen-like atmosphere that is simultaneously comforting and impressive in its technical scope and achievement.

A testament to the power of editing, Fraud constructs a narrative of one American family’s greed, desperation and transgression entirely out of home movie footage. The project came about when director Dean Fleischer-Camp (best known for the Marcel the Shell with Shoes On web shorts) stumbled across a family’s YouTube channel with more than 100 hours of their home-movie footage uploaded. Fleischer-Camp took the raw footage and, through some clever editing and additional found-footage, carved out a story about a family driven mad by consumerism, and the desperate lengths they go to feed their addiction.

A descent into the American dream-turned-nightmare. By using footage of a real family, Fraud conjures an authentic yet unsettlingly uncanny atmosphere that wouldn’t have been possible otherwise. Controversially, the film premiered at Toronto’s Hot Docs festival, and a post-screening Q&A led to a reportedly heated discussion on the responsibilities of truth, centring around the filmmakers’ decision to classify Fraud as a documentary. But, considering the film’s title, its false genre claim seems entirely appropriate.

Winnipeg-born filmmaker Guy Maddin is no stranger to conceptual filmmaking, with 2015’s The Forbidden Room weaving together a series of imagined recreations of lost films. His newest film continues to meditate on the nature of the medium. Commissioned by the San Francisco Film Festival, it’s a homage to San Francisco on screen that compiles fragments of film and TV set in the city by the bay. At the same time, it’s a patchwork recreation of Alfred Hitchcock’s Vertigo (1958), possibly the most iconic San Francisco-set film ever made. By matching thousands of sequences and shots from different films, Maddin is able to allude to Vertigo’s most memorable scenes, depicting the plot in sequence while constantly switching between different stand-ins for the original characters.

The Green Fog is unique in cine-essays in that it demonstrates the resonance and cultural impact of its subject without showing a single clip of it. In the process, it says more about Vertigo than any conventional video essay could. Similarly, including films that predate Vertigo draws attention to a set of long-standing visual and narrative tropes, perhaps otherwise unnoticed within their original contexts, showing how the same ideas have been reused and reshaped in different hands. Maddin thereby makes the scope of cinema feel both infinitely large and incredibly small at the same time.