With the prequel series to Jim Henson’s The Dark Crystal hitting small screens this week, and a behind-the-scenes exhibition opening at BFI Southbank, we untangled 10 of the best works of big screen puppetry. 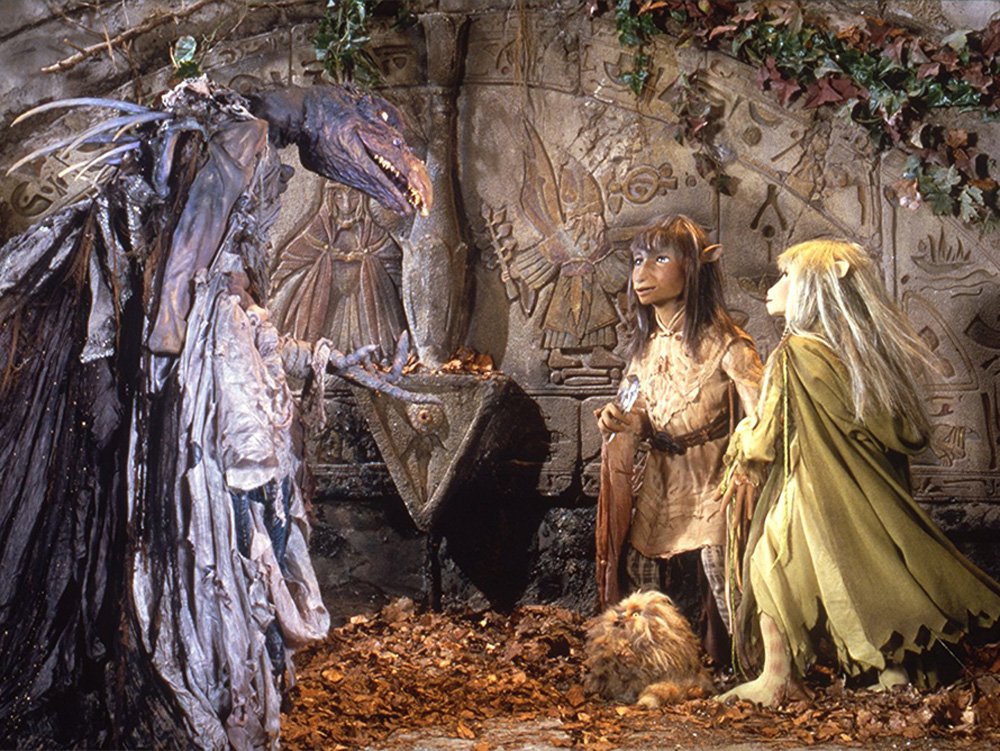 Book tickets for The Dark Crystal: Age of Resistance Exhibition at BFI Southbank

Puppetry and cinema might seem like an awkward fit – one of the oldest and most homespun visual artforms combined with one of the most modern and glamorous. But the history of puppet films is a rich one, stretching back to Weimar Germany, where visual artist Lotte Reiniger was the first to fuse the ancient traditions of shadow theatre with state of the art camera trickery.

For decades, puppetry on the big screen remained largely synonymous with animation: wooden mannequins would be brought to life by stop-motion, their strings and human operators carefully hidden. But in the 1960s and 70s, the proudly handcrafted Thunderbirds (1965-66) series inspired a boom in family-friendly puppeteering. When Jim Henson’s small-screen smash The Muppet Show (1976-81) spawned its first theatrical adventure, puppet movies headed for Hollywood.

The work of Henson and company soon came to dominate big-screen puppetry, spawning not just a rewarding run of Muppet movies but a fistful of idiosyncratic one-offs – the most notable of which is The Dark Crystal (1982), a shimmering, darkly enchanting fantasy adventure that could only have been realised through old-fashioned puppetry. Perhaps inadvertently, the film also managed to expose the often uncanny and disturbing nature of puppetry on screen, leading to a run of inventive, often downright bizarre puppet-centred horror movies.

As Netflix prepares to unveil a brand new prequel to The Dark Crystal, we take a look at the storied history of the puppet movie, from Soviet satire to festive slapstick, from big-time Hollywood blockbusters to the early DIY experiments of several of this century’s most vital filmmakers. 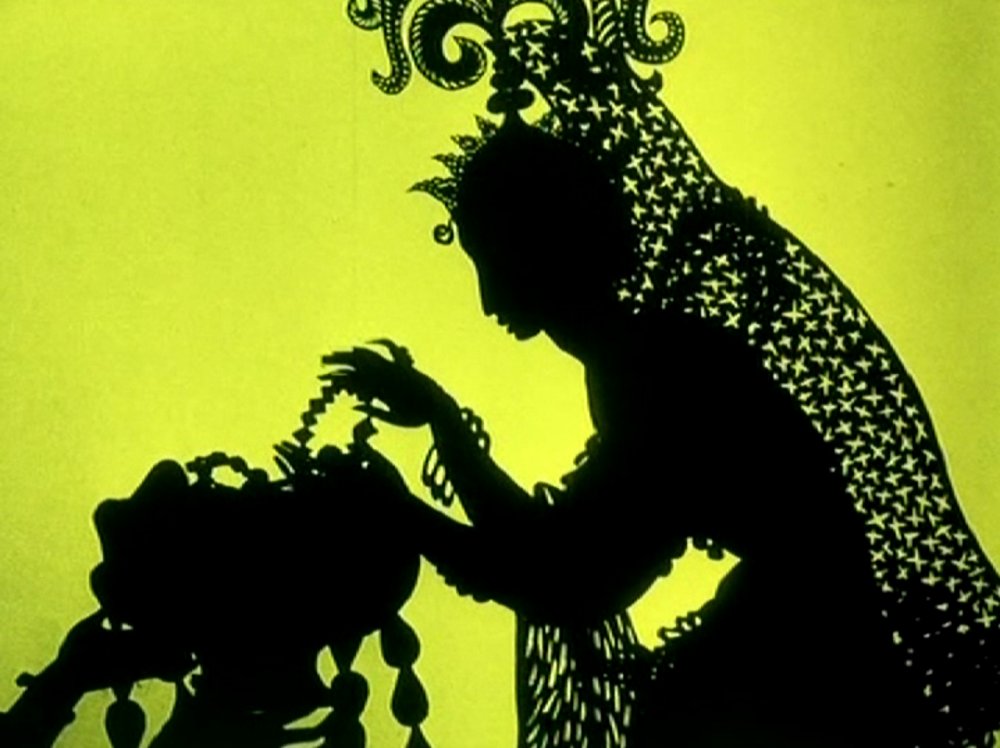 The oldest animated feature film still in existence, German theatre designer turned filmmaker Lotte Reiniger’s entrancing shadow-play is only a puppet film in the loosest sense, utilising paper-cut figures combined with more traditional animation techniques and filmed using a multi-plane camera of Reiniger’s own invention. Based on a fable from the One Thousand and One Nights’ Scheherazade, the story follows Arabian princeling Achmed as he steals a flying horse from an African wizard and soars away to Wak Wak, land of the spirits, where he woos and wins the local faerie princess. Bold, romantic and slyly sensual, Reiniger’s film is the shadow equivalent of a pre-Code Valentino or Dietrich romance, closer to The Sheik than Snow White. Overlooked for decades, the film has recently become a staple on the artsier fringes of the Saturday morning kids’ club circuit – a highbrow alternative to Disney’s Aladdin (1992). 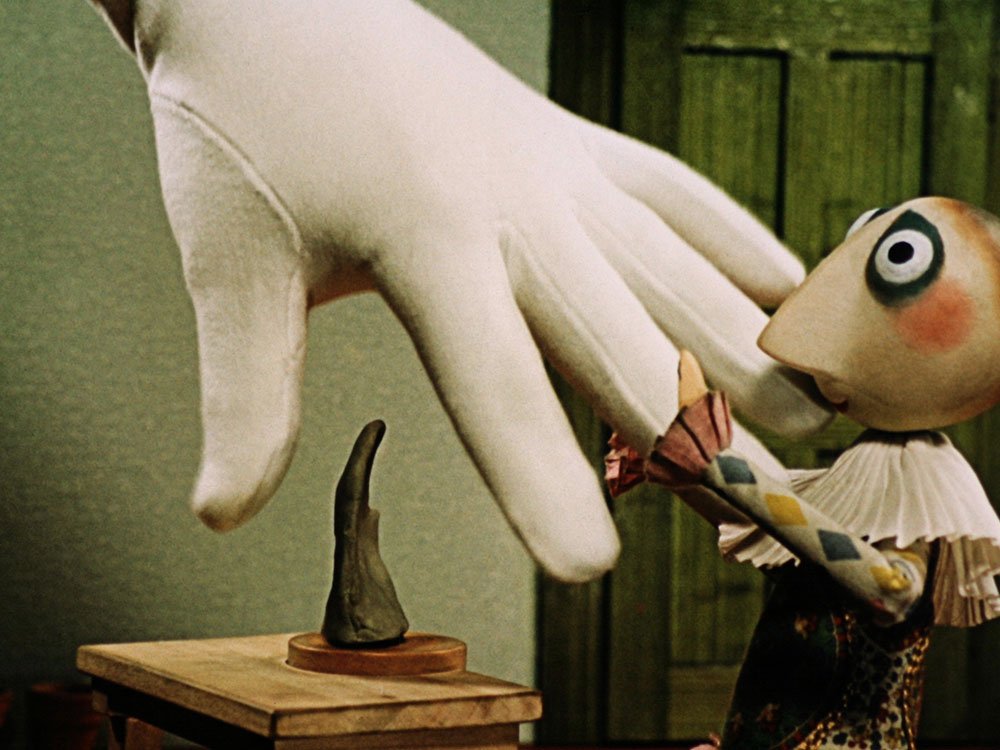 Puppetry is a political act in Czech animator Jirí Trnka’s fierce 18-minute satire, as a simple potter is tormented by the divine machinations of an invasive, unforgiving Hand from the sky. Darkly echoing the 1953 Looney Tunes classic Duck Amuck, in which Bugs Bunny is existentially tortured by his own pencil-wielding creator, Trnka recasts the Hand as the ultimate tool of the state, an all-controlling, all-consuming force whose inability to sway the potter with threats, violence or promises of wealth drives it into a vengeful rage. For the most part the film is animated by stop-motion, but when the potter finally stops fighting and submits to the Hand’s influence, wires are slipped around his wrists and he truly becomes a puppet, both literally and metaphorically. Blunt, heartbreaking and still horribly relevant, Trnka’s film is a towering pinnacle of Soviet-era animation. 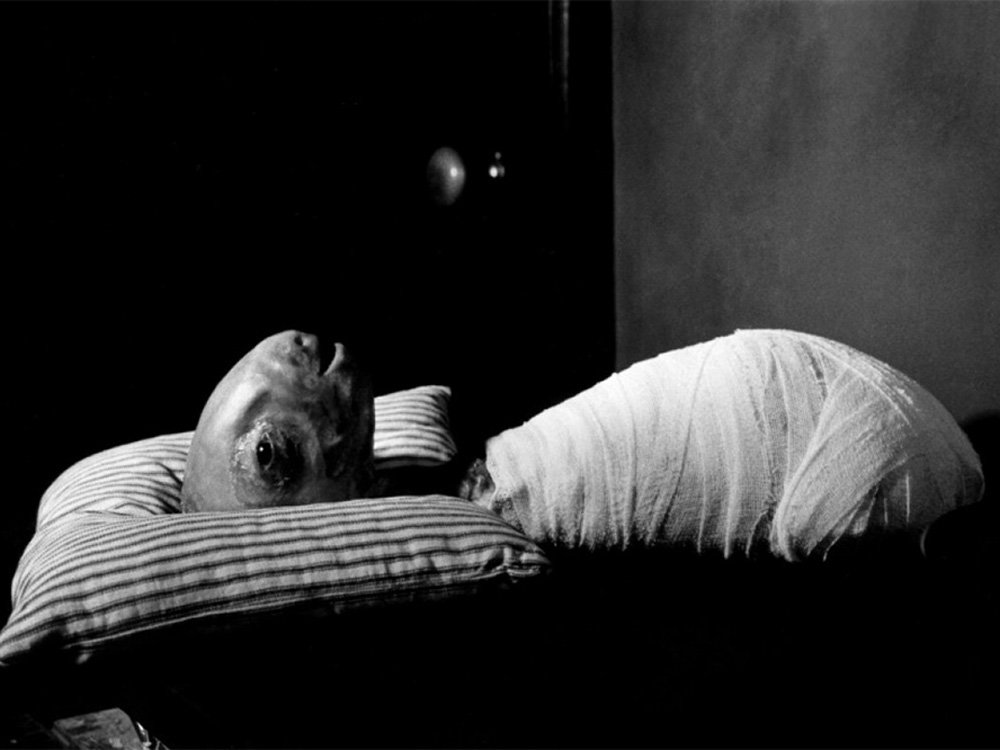 “Oh, you are sick…” More than 40 years after its creation, David Lynch still refuses to reveal how he constructed – or conjured – the mewling, feverish monster baby at the heart of his downward-spiraling DIY debut. His commitment to preserving the mystery is admirable, but we can safely assume some kind of puppetry was involved, lovingly hand-crafted by Lynch and his committed team of non-professional filmmakers, who slaved for three long years in the backlot at the American Film Institute to realise their leader’s nightmare vision. And the sickly baby isn’t the only memorable puppet effect in the film – witness the man-made chickens (“strangest damn things!”) that our bewildered hero Henry is served at dinner by his fiancee’s father, with their glistening skin and scraping, herky-jerky drumsticks, leaking black blood all over the table. 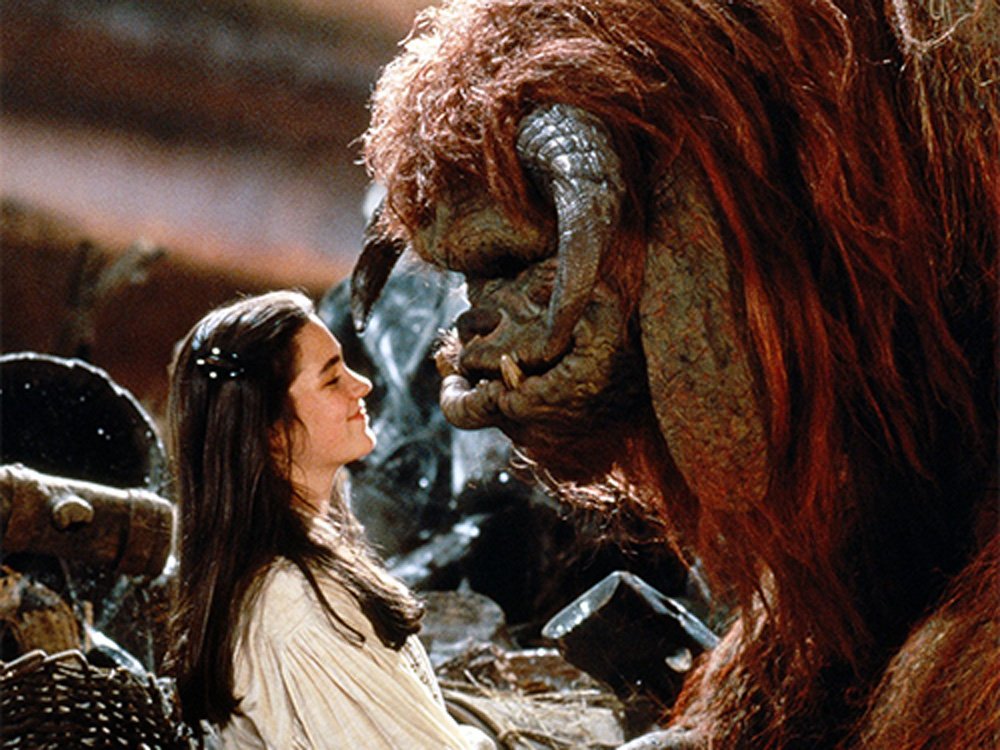 There are three things everyone remembers about Labyrinth: David Bowie’s hair, David Bowie’s codpiece and Jim Henson’s puppets. And while the latter may not have come to dominate the cultural zeitgeist quite like the first two, the puppets are arguably more important to the story. Directed by Henson and inspired by the worlds of Lewis Carroll and the fairytale illustrations of Brian Froud – a key collaborator on The Dark Crystal four years previously – Labyrinth follows Jennifer Connelly’s waifish innocent as she tries to save her infant brother from the clutches of Bowie’s fiendish Goblin King. Yes, it’s dated and frequently goofy – the Magic Dance routine has become notorious, and not just for the contents of Bowie’s skin-tight leggings. But it’s also imaginative, visually sumptuous, and the puppetry is magnificent, from jousting fox terrier Sir Didymus to the haunting, disintegrating Fireys. 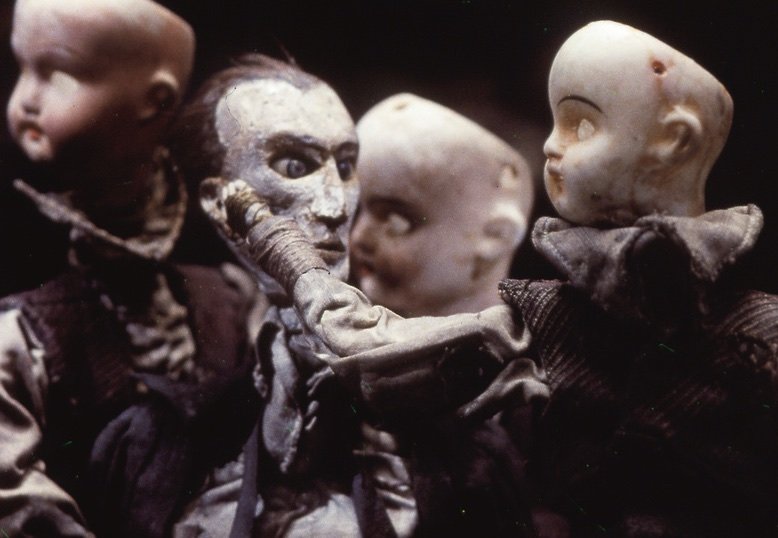 Inspired – albeit loosely – by the childhood memoir of tragic Polish author Bruno Schulz, a weaver of dark fairytales who was murdered by the Nazis in 1942, the Brothers Quay’s haunted short updates the visual style of Soviet-era stop-motion and adds a festering layer of queasy, Lynchian gothic horror. Often mimicked but never equalled, UK-based American animators Stephen and Timothy Quay are interested as much in the motion of machines and objects – screws, lightbulbs and rusted steel automatons – as they are in human figures. Street of Crocodiles follows a gaunt, spectral mannequin, a representation of Schulz’s poverty-stricken father, as he navigates a mouldering subterranean landscape where cracked mannequins loom from the mirrored shadows and a coven of ghostly dolls with baby faces and cotton-wool minds cast arcane spells in the darkness. The result is unnervingly opaque and uniquely, intricately beautiful. 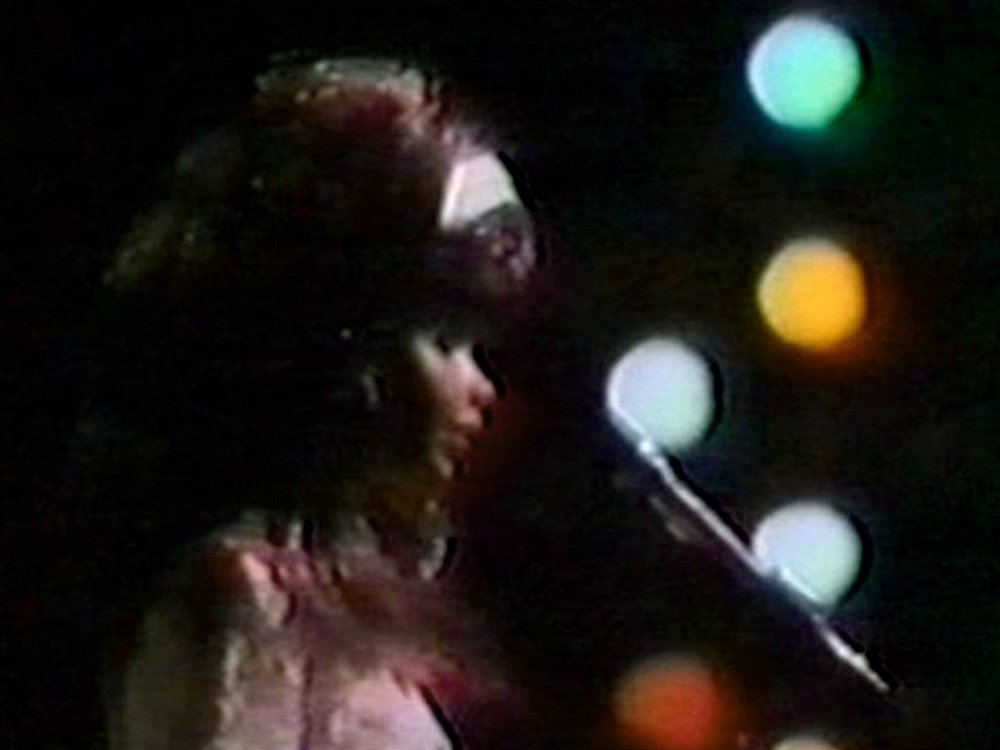 It may be officially banned following a lawsuit by the Carpenter family, but fuzzy bootleg copies of Todd Haynes’ home-made debut are easy to track down online. It’s well worth the effort – slyly evoking the shallow, exploitative tone of a Hallmark biopic but populated entirely with walking, talking Barbie dolls, Superstar recounts the tragic tale of angel-voiced American sweetheart Karen Carpenter from the first flush of pop success to her lonely death from heart failure brought on by anorexia nervosa. Given the film’s entirely DIY roots it’s remarkable how many of Haynes’ stylistic signatures are already in place, from the precise dialogue and vocal performances to the painstaking recreations of period decor and costume. It’s a little frayed around the edges, but Superstar is clearly cut from the same gorgeously patterned cloth as Far from Heaven (2002) and Carol (2015). 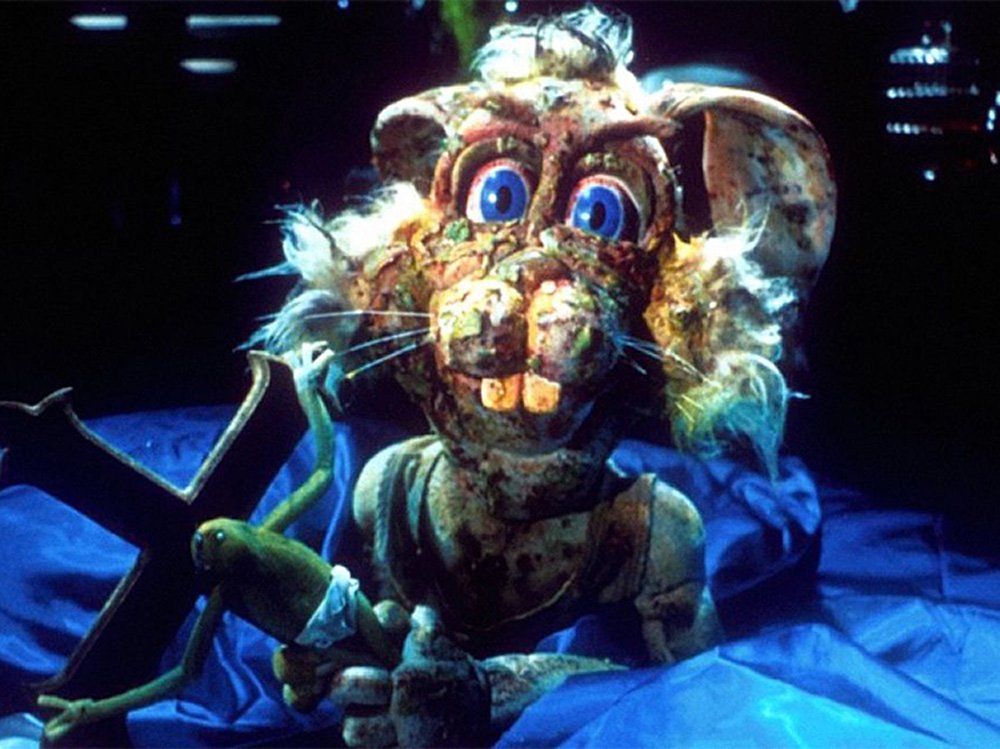 Grotesque and puerile it may be, but there’d be no Lord of the Rings (2001-03) without Meet the Feebles. Conceived as a TV short and (painfully) extended to feature length, this gleefully despicable puppet comedy was where Peter Jackson learned to operate miniatures, to design special effects, to push the boundaries of what was possible on a strictly limited budget. Sure, it’s all in the service of utterly base-level puke, shit and dick jokes, but it’s still stomach-churningly inventive. Like their family-friendly counterparts The Muppets, Jackson’s Feebles are a madcap theatrical troupe whose antics are beloved by audiences. But offstage, it’s a different story – there’s hardcore porn being shot in the theatre’s basement, and the star attraction is dying of an STD. The result is infantile, relentless and at times genuinely hard to watch, but there are flashes of rancid genius. 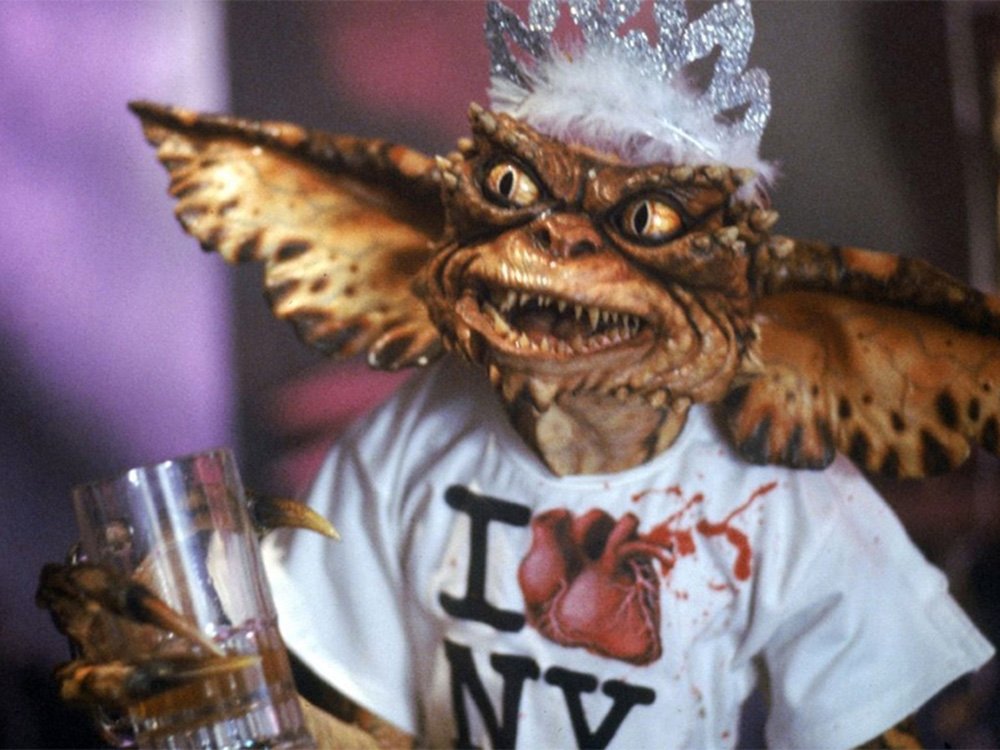 The first film may be sharper, wittier and more wickedly festive, but if we’re talking sheer puppet mayhem the sequel is unbeatable. Taking inspiration from a certain loudmouthed, freaky-haired New York celebrity millionaire, Joe Dante and screenwriter Charles S. Haas created Clamp Tower, a skyscraper of the future where science labs sit alongside state-of-the-art TV studios, and where Billy Peltzer and his furry pal Gizmo arrive for their first day of work, only for hell to break loose. Slamming together all of Dante’s pop-culture obsessions – creature features, Looney Tunes animation, Three Stooges slapstick, broad-brush satire – into one berserk, scattergun pastiche, Gremlins 2 can be exhausting. But as Chris Walas’s slimy creations sneer, scamper and slash their way across the screen – climaxing with a frenzied song ‘n’ dance number that might be the technical culmination of cinematic puppetry – it’s impossible not to be swept along. 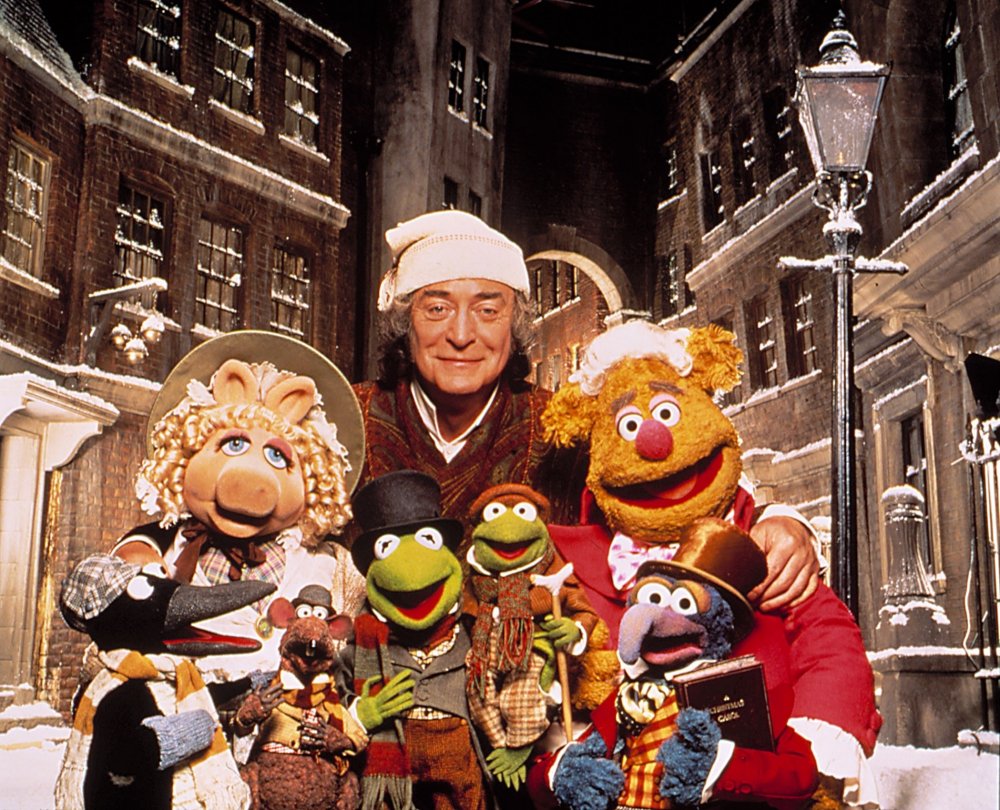 Narrowly edging out the joyful 2011 reboot, this is the sweetest and most elaborate of the Muppets’ many big screen adventures, and one of the more thoughtful adaptations of Dickens’ story, too. Michael Caine is all glowering authority and salty whiskers as Scrooge, the heartless miser blind to all the giddy animal antics (and tragic animal poverty) whirling around him. Kermit is perfectly cast as long-suffering secretary Bob Cratchit, with Miss Piggy as his loving wife, stuck at home with all the little pigs and frogs. Directed by Brian Henson in the year following his father Jim’s untimely death, it’s a film of boundless pleasures: Statler and Waldorf on chain-rattling form as the ghosts of Jacob and Robert (geddit?) Marley; The Great Gonzo bafflingly, hilariously cast as Dickens himself; and perhaps the most authentically unnerving Ghost of Christmas Yet to Come ever committed to celluloid. 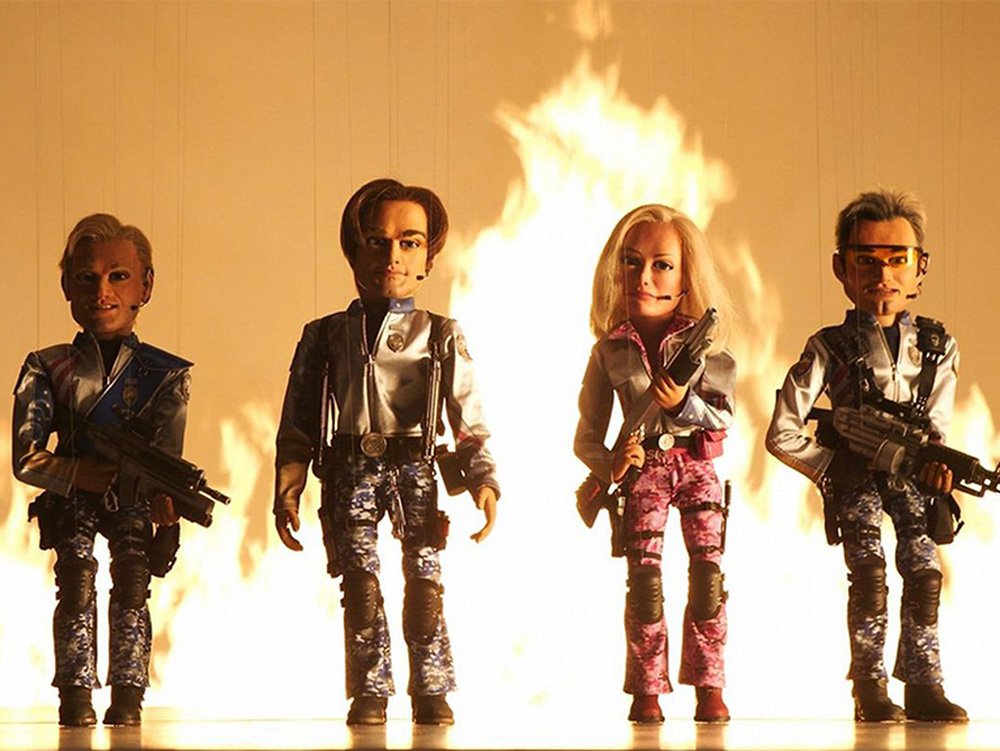 “It was the worst time of my entire life.” That’s co-writer Matt Stone on the production of Team America, a berserk war-on-terror action pastiche utilising the same creaky, loveable wood-and-string puppetry as the original Thunderbirds. Drastically underestimating the technical complexity of shooting with mannequins – and refusing to make their lives easier by employing any digital trickery whatsoever – South Park creators Parker and Stone barely completed the film in time for its release. And yet Team America was an instant classic – a comically inspired, unashamedly tasteless parody of everything from Broadway musicals to dictator chic to Matt Damon (‘Matt Damon!’). And as fiddly as it may have been to shoot, the film looks fantastic, as our crack band of trigger-happy heroes flatten Paris, tear up the Arabian desert and engage in some eye-poppingly athletic puppet nookie.