Life after the end of the world doesn’t look pretty in these 10 classic post-apocalypse films, which we’ve rounded up to celebrate the release of dystopian zombie drama The Girl with All the Gifts. 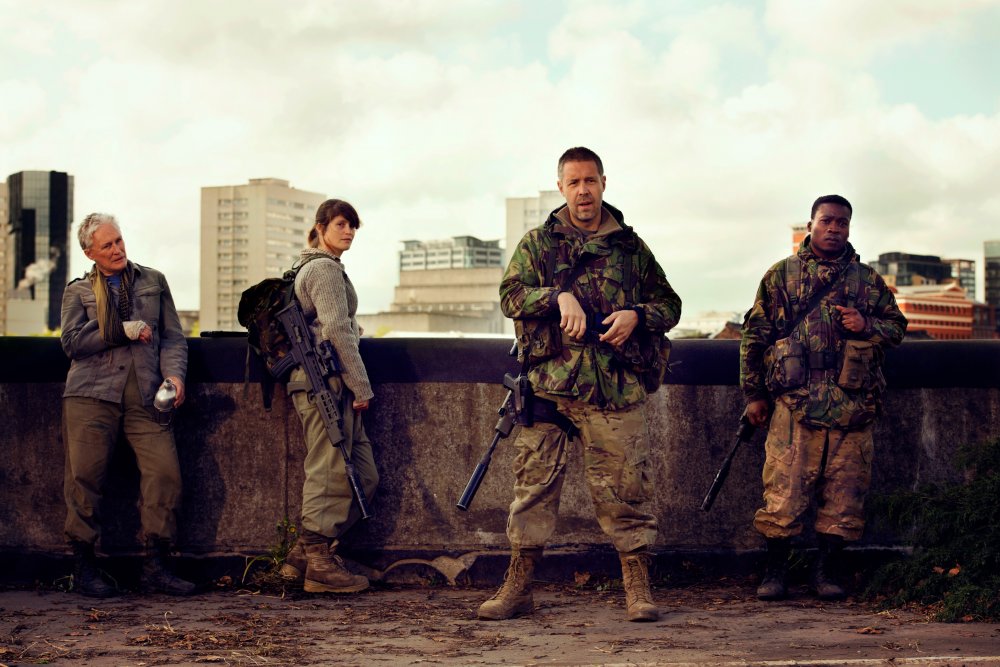 The Girl with All the Gifts, backed by the BFI Film Fund, is in cinemas from 23 September 2016

‘Keep Calm and Carry On’ ran the slogan of the British government poster to encourage continuity and solidarity during the dark days of the Second World War. It’s since been resurrected by popular culture and endlessly memed, but – whether one sees it as noble sentiment, sinister tool of conformity or comedy punchline – it inevitably centres on how to respond to discourage mass hysteria or uprising before the worst happens.

But what if the worst actually does happen? If it’s apocalypse now, what then?

Perhaps the ultimate “what if..?”, the end of the world has been played out by writers and filmmakers from numerous angles and attacks – meteors, nuclear, plagues, giant monsters – each one instructive to view how mankind deals with the shock of near-extinction.

New film The Girl with All the Gifts spins yet another variation on the ever-popular zombie apocalypse. The few remaining humans struggle to survive and find a cure to the pandemic, potentially delivered through second-generation ‘hungries’ who retain an ability to think and feel, alongside insatiable flesh-and-blood-lust. So far, so typical, but the film’s smartest and most daring mutation is to posit just who – or what – deserves the right, in evolutionary terms, to keep calm and carry on.

Whatever causes civilisation’s cataclysmic break, then, all the best post-apocalyptic films have one eye on this fractured future, and where it might lead. But they also contain a vision of what brought us to that tipping point, and, ultimately, where we really are now. Here are some of the most powerful and prescient. 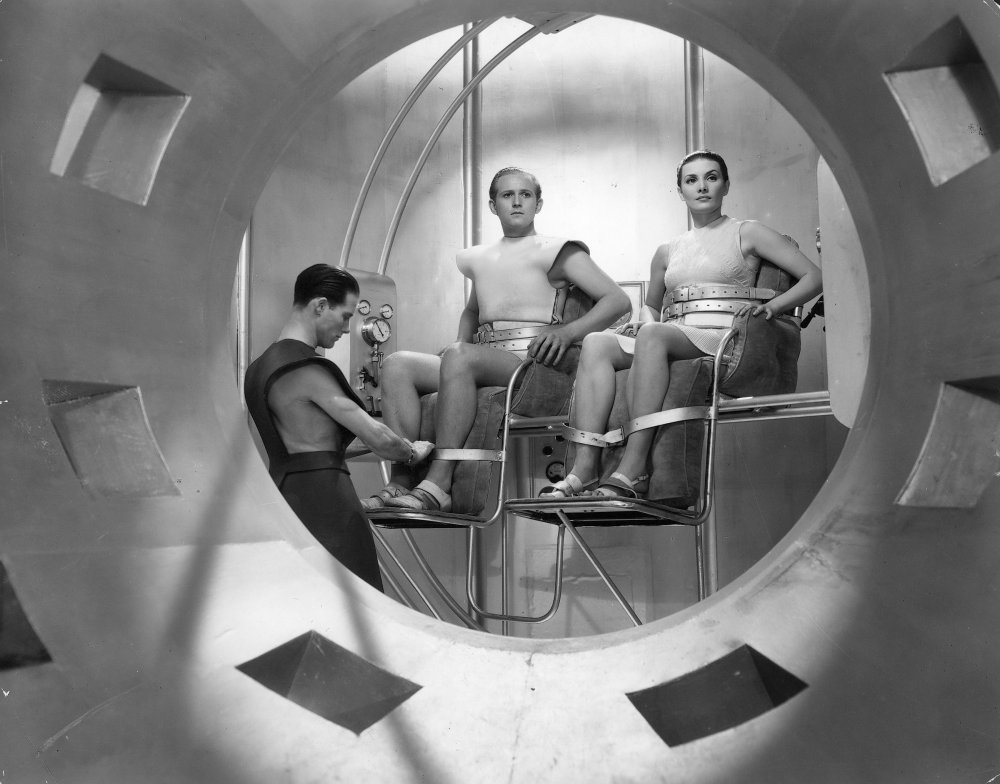 Perhaps more noteworthy for its ambition than its execution, this early British sci-fi epic is still a fascinating time capsule. Legendary writer H.G. Wells was given unprecedented control for his first-ever screenplay (adapted from his own novel The Shape of Things to Come). Its three-part structure, often employing the same actors in multiple roles, time travels through a century in its Everytown setting: a haunted – and grimly prophetic – present day under threat of war; a decades-long global conflict in which “the wandering sickness” kills off more than half the population and leads to a 1960s Dark Ages-style feudal existence; through to a future where space-age travel offers hope of salvation. 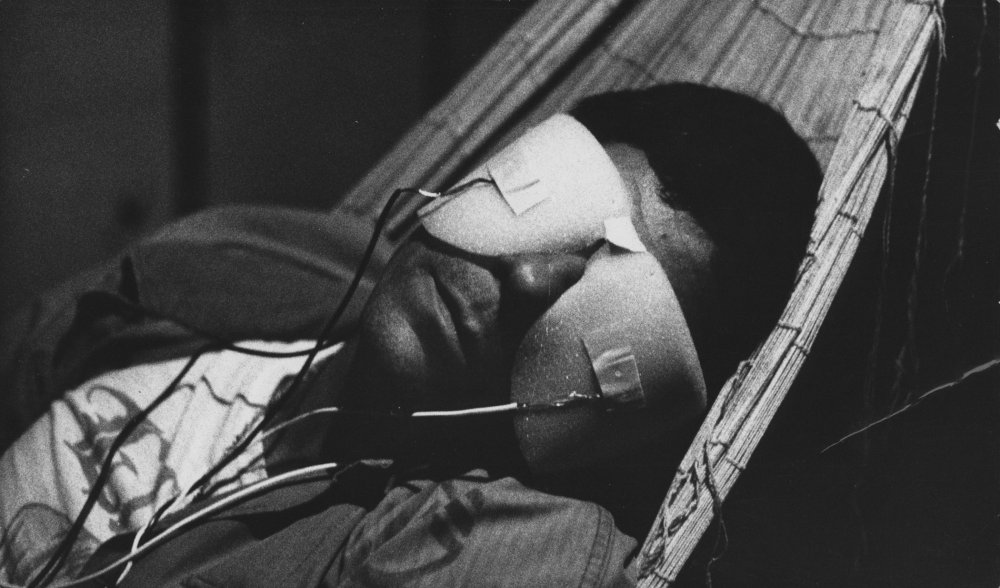 One of the most acclaimed short films ever made, Chris Marker’s philosophical time-travel conundrum itself feels so ethereal as to exist out of time. Described by its maker as “un photo-roman” or “photo novel”, La Jetée’s sequence of still images – bar one brief flicker of movement, tellingly an eye opening – no doubt helps conjure this illusion, but it’s also bound up in the overlapping narrative.

A Parisian from today’s radioactive wasteland is sent back in time to try to prevent World War III, though he himself is haunted by a childhood memory of witnessing an obscure act of violence and a beautiful woman. Marker isn’t just (if at all?) interested in how man deals with this devastating post-apocalypse, as much as how we process time itself, and the tiny devastations it yields on individual psyches as much as on an entire species. Austere yet lustrous in its monochrome stillness and utterly haunting, though also see Terry Gilliam’s Twelve Monkeys for a less abstract yet still powerful Hollywood homage. 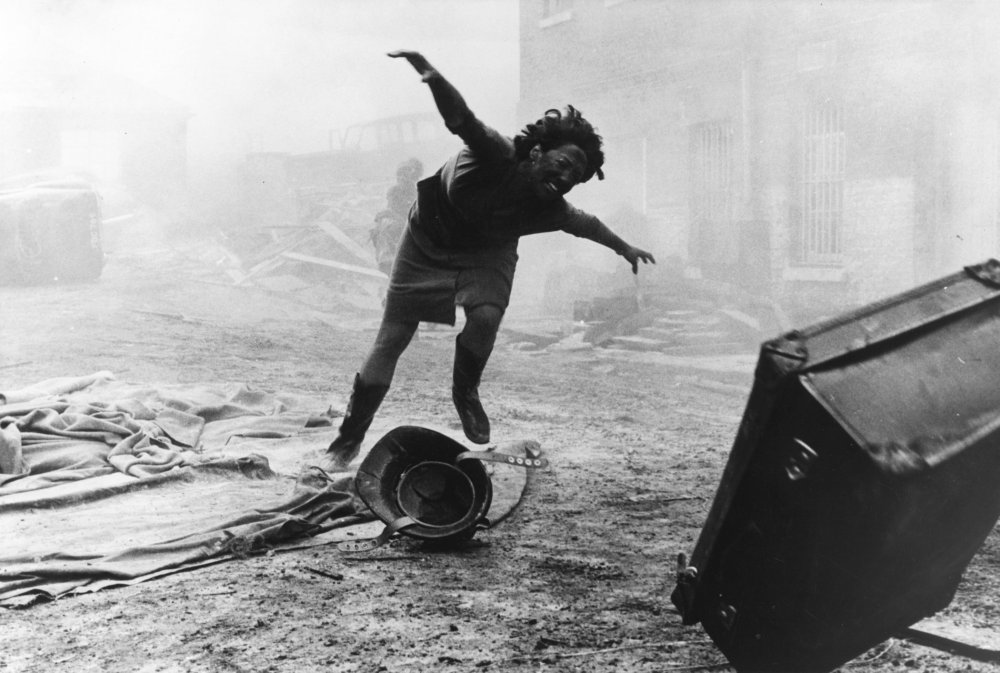 How accurate must a film be, to be banned by its own government for fear of spreading mass panic? Peter Watkins’ 1965 BBC television project was deemed so harrowing that it only finally aired 20 years later (though in the meantime it won the 1967 Oscar for best documentary (!) and a BAFTA for best short) and even today can induce shivers.

Extensively researched from reports on Second World War firestorms and the atomic bombs of Hiroshima and Nagasaki, and backed up with charts and statistics, Watkins’s canny documentary-infused fiction posits a nuclear attack on Britain after east-west conflict escalation and the horrendous fallout for survivors of the blast. The sickness, starvation, riots, suffering and the sheer overwhelming nature of life stripped of all meaning and hope is all rendered in dispassionate reportage. And the clipped British narration gives it a matter-of-fact authenticity that’s all the more horrific. 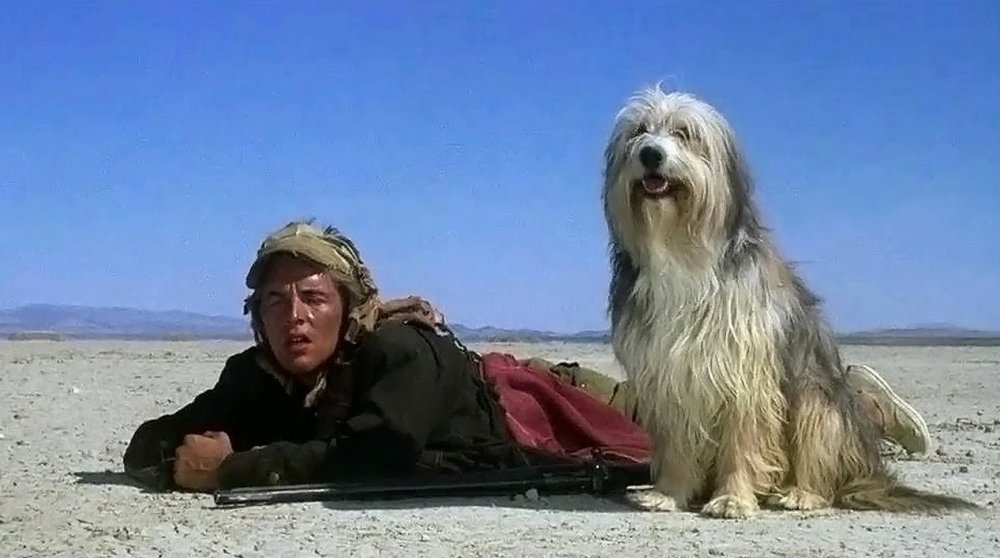 Written by cult sci-fi writer Harlan Ellison and one of only two films directed by cult character actor L.Q. Jones (The Wild Bunch, Casino), it’s perhaps no surprise that, despite trading on familiar post-apocalyptic iconography, this oddball black comedy is a true one-off.

The antagonistic eponymous pair, Vic (Don Johnson) and Blood (voiced by Tim McIntire), roam America’s wastelands after 2024’s five-day-long World War IV, communicating telepathically as tit-for-tat providers of, respectively, sex and food. Ellison’s ruthless streak – civilisation’s end is brusquely written off as when politicians “finally solved the problem of urban blight” – goes into overdrive when Vic is lured into a bizarre underground society to act as stud for Jason Robards’ impotent clan. The clashing tones from Norman Rockwell-esque smalltown pastiche to an ending that’s brutal yet played for laughs (right?) make for an experience as discomfiting as it is sometimes disjointed, but always goes its own way. 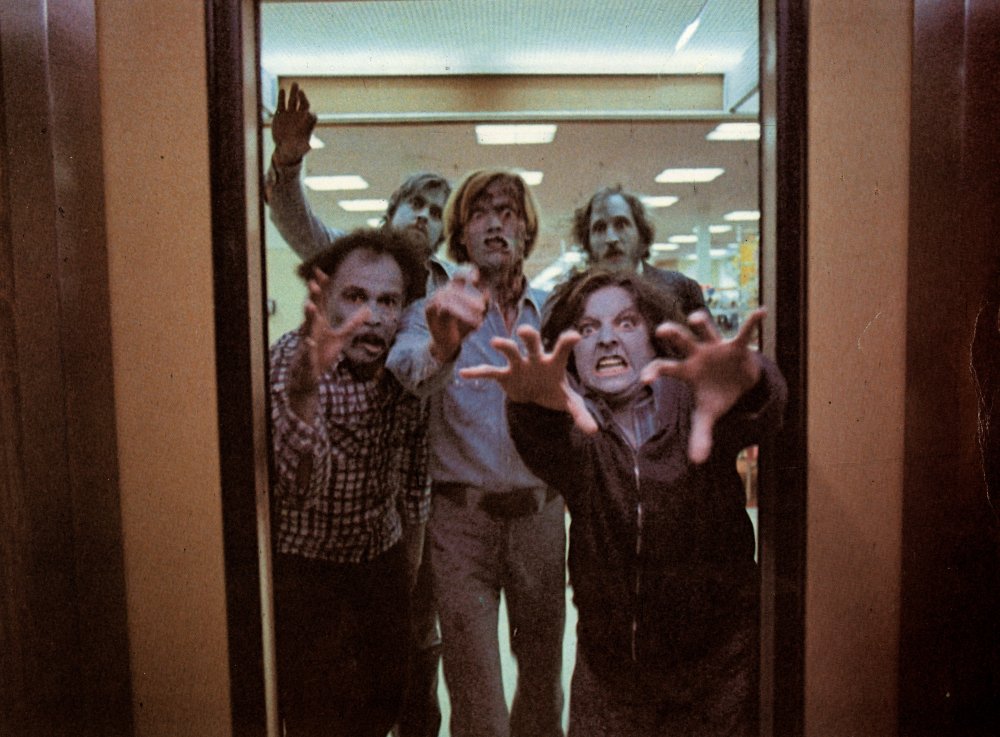 “When there’s no more room in Hell, the dead will walk the Earth…” For many, the peak of George A. Romero’s pioneering and enduring zombie saga is his second entry. After an intense, eye-poppingly gory opening, Romero strands his four survivors of the apocalypse in a cavernous shopping mall for the majority of the leisurely running time, while the undead lurch haplessly around, their moaning faces pressed up against glass windows, flailing for now useless consumer goods.

The point is made long before one of our quartet remarks that “they’re us” and indeed, our quartet exhibit similar, if less carnivorous, behaviour before desperate rivalry sets in. A wickedly perceptive social satire on rampant consumer culture, this film’s influence on the eternally popular zombie sub-genre is incalculable, with the voracious living dead a convenient blank slate on which to pitch all manner of cultural critiques. Yet few, if any, match the master at his peak. 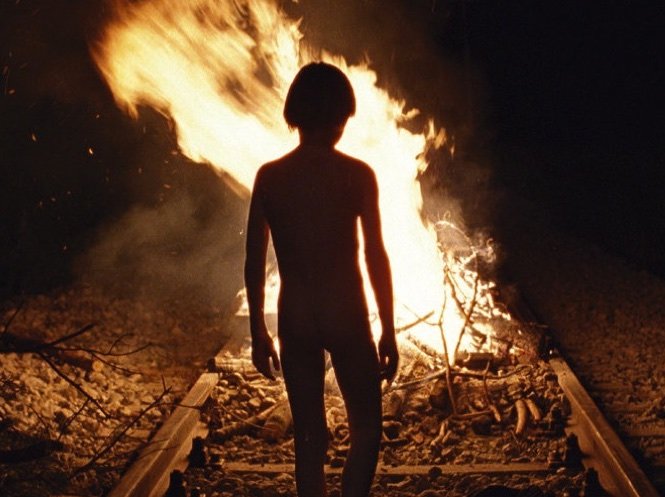 Largely overshadowed (hidden?) between two more highly controversial and acclaimed works, The Piano Teacher (2001) and Caché (2005), Michael Haneke’s post-apocalyptic nightmare (the majority literally unfolding in the dark) tackles civilisation’s end in his traditionally severe, clinical style. Reunited with The Piano Teacher star Isabelle Huppert, the director traces a bourgeois family’s attempts to deal with an unnamed cataclysmic event that has reduced society to its most primitive state.

Reminiscent of Cormac McCarthy’s The Road (both novel and film adaptation), it’s a rigorously imagined reset of a new world order. Food, water and shelter must be bartered for or taken by force. Practical items – lighters, bicycles – are prized over previous status symbols like jewellery. Huppert is typically good as the shell-shocked matriarch, though she gradually cedes the central role to her daughter Eve (Anais Demoustier). And if there’s just the hint of a brighter future, Haneke never lets us forget that, in this brutal time, the weak and vulnerable are sacrificial lambs. 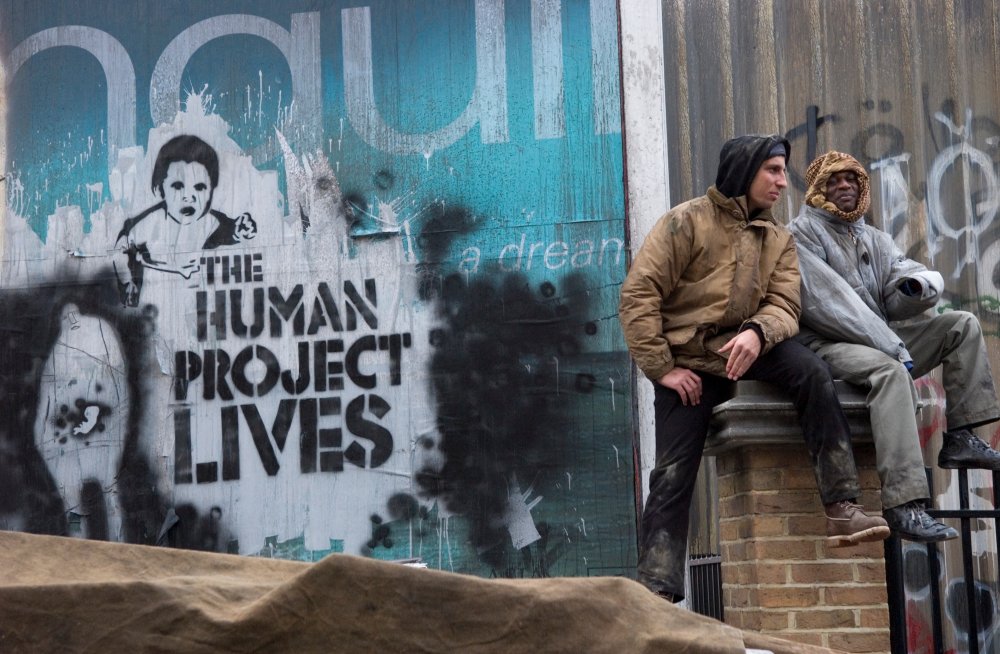 Such a brilliantly simple conceit for the end of humankind: global infertility has rendered our world dying, giving rise to totalitarian regimes, fanatical cults and the end of future hope – until the emergence of one pregnant woman, who must be saved at all costs from the warring factions who would claim her…

Heavily adapted from P.D. James’ novel, Alfonso Cuarón’s masterful film straddles sci-fi parable and post-apocalyptic thriller in, paradoxically, an ongoing, slow-burn apocalypse. It’s a showcase for virtuoso filmmaking (two unbroken take set-pieces, including one inside a fleeing packed car, are astounding) and acting (Clive Owen delivering a career-best performance as the reluctant hero) that never overwhelms the increasingly frightening sense of prescience. Its central premise aside, the closed borders, internment camps, bombed-out cities and the elite insulated from it all are images that looks more and more plausible for our imminent future every day. 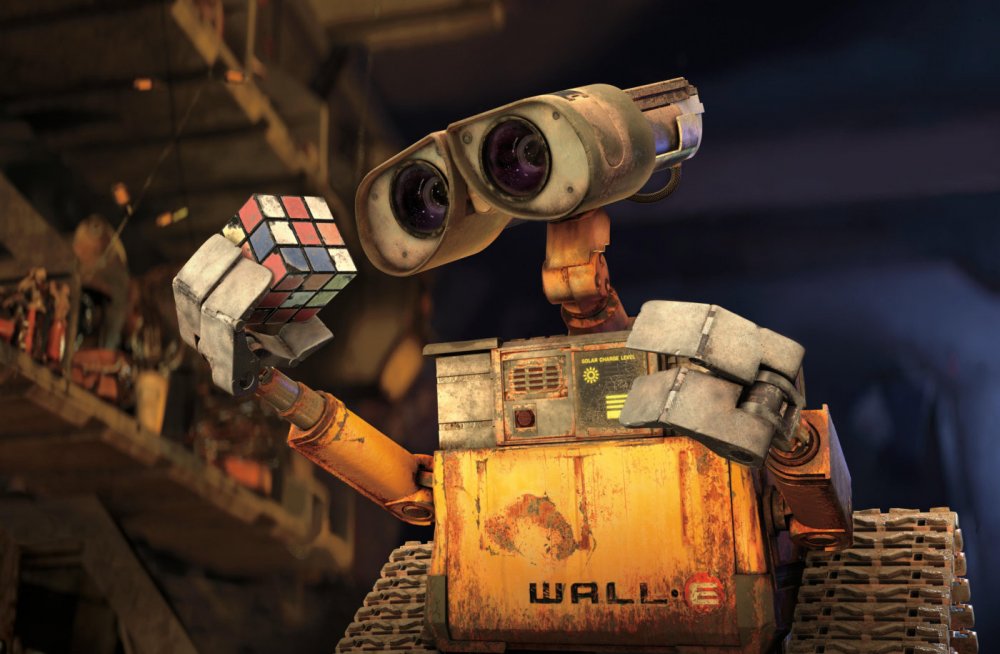 Then – and probably only then – wonder at the full extent of director Andrew Stanton’s pessimistic prophecy for mankind. We’ve literally trashed our planet through unfettered greed and consumption (chief culprit: conglomerate Buy n Large) and the last remaining humans, confined to a luxury spaceship, are so coddled and obese that they can’t leave their moving chairs. So endearing are our robot heroes and so stunning Pixar’s animation that, despite the ultimate hopeful message of organic rebirth, it’s hard to think of a family entertainment that paints future generations as so utterly feckless. 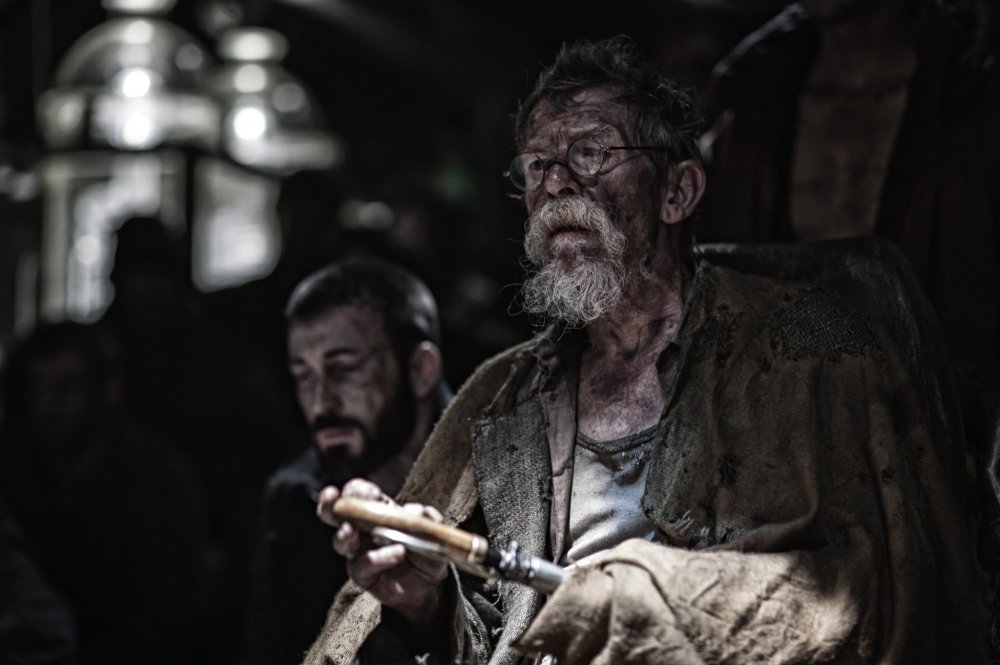 Whether we admit it or not, climate change is the most pressing threat to total global ruin, a fact that Korean director Bong Joon-ho (Memories of Murder, The Host), adapting a French graphic novel, gloriously exploits for this visionary futurism. Survivors of the self-inflicted Second Ice Age are on board the Snowpiercer, a mammoth train that ceaselessly circumnavigates the frozen Earth, neatly compartmentalising its occupants: impoverished scrappers at the rear, upper class up front. When the have-nots, led by Chris Evans, stage a revolt, their carriage-by-carriage coup reveals a bizarre series of segregated scenarios, from fascist schoolroom to bump ‘n’ grind club.

Bong and his cast (including Tilda Swinton, John Hurt and the great Song Kang-ho) are evidently having a blast with this roaring metaphor on wheels, offering up inventively kinetic action scenes and blunt force social commentary that kick Hollywood’s similar attempts (The Day after Tomorrow, anyone?) into yesterday. 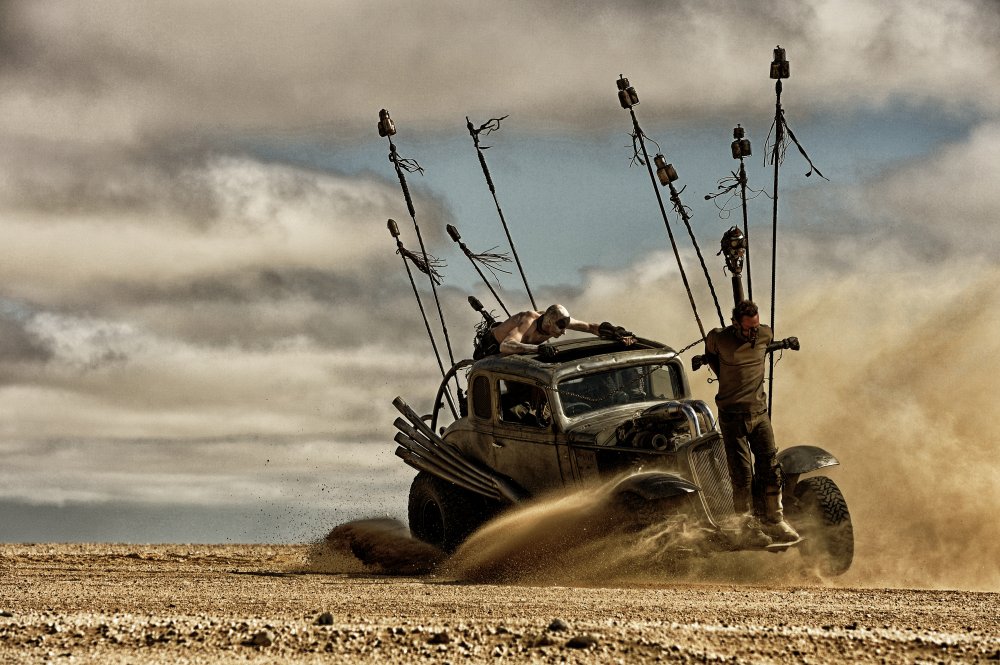 The best action movie of the past 20 years? The best franchise reboot… ever? Australian director George Miller originated the Mel Gibson post-apocalyptic outback trilogy and many consider 1981’s The Road Warrior the essence of old school, practical vehicle action and stunt work. As great as that movie is, Fury Road ups the ante in every way. It’s both stripped down – a chase movie boiled down to survival essentials in this dust-blasted desert land: water, gasoline, reproductive women – and pumped up into a fevered orgy of destruction, with men and machines in perfect (dis)harmony, in front of and behind the camera.

This is a staggering technical achievement, particularly Margaret Sixel’s propulsive yet always orientating editing. And if Miller’s sidelining of Tom Hardy’s taciturn, titular anti-hero in favour of Charlize Theron’s fearsome, already iconic Imperator Furiosa and her cargo of rebel wives makes some fanboys mad, it pushes the film’s progressive war cry for a more equitable future to the max.