Which of our capital’s compass points has played host to the best movies? 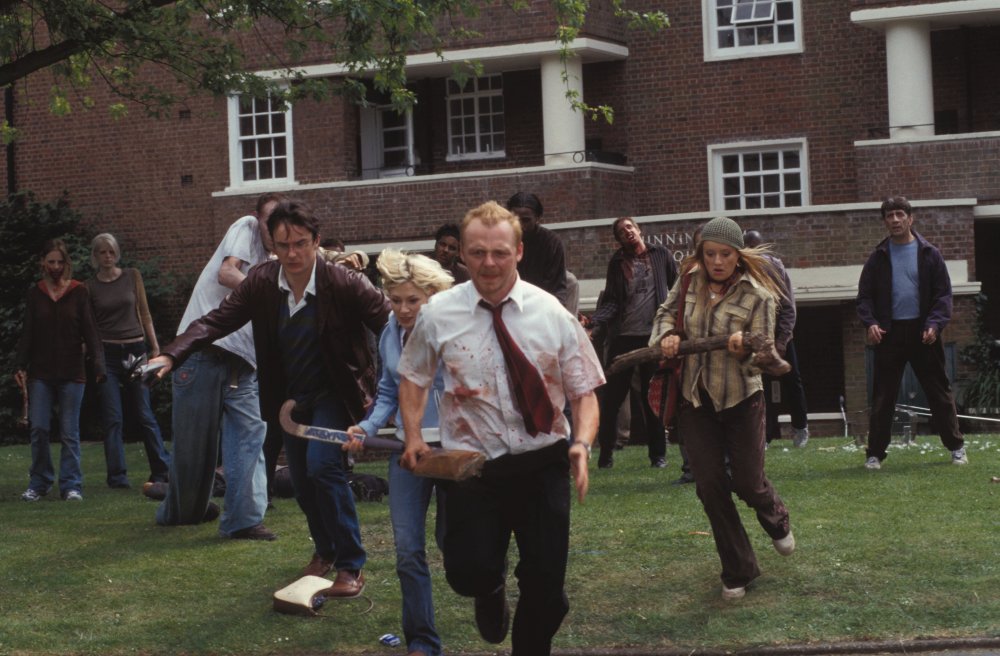 The north London of popular imagination doesn’t immediately spring to mind as a cinematic destination. The familiar clichés, satirised in Private Eye’s ‘It’s Grim up North London’ cartoon strip, suggest it is populated by rich, pretentious champagne socialists and media lefties – not people you would want to see on the big screen for two hours. Of course, the reality is far more interesting, and the locations, diversity and culture of the north London boroughs have inspired directors from across the world to make great works of cinema.

Although regarded as tamer than its east and west counterparts, north London has often been exploited by filmmakers to show the darker side of film. Horror films love the place – Highgate Cemetery has blessed many a vampire film with a cameo, Alexandra Palace gave a marvellous performance as a menacing church where the heroine is stalked in Lucio Fulci’s gory A Lizard in a Woman’s Skin, and the beast seeks prey on Hampstead Heath in An American Werewolf in London (1981). On a more innocent note, a not-so-fearsome creature turned up in one of the best Children’s Film Foundation films, The Monster of Highgate Ponds (1961).

Cinema views north London as a sinister place, particularly for women. A woman’s body is discovered on Hampstead Heath in Sapphire (1959), while a little girl, possibly a figment of the imagination of her ‘mother’, vanishes in Bunny Lake Is Missing (1965). Tragically, documentaries have shown it as a place where vulnerable women die alone, in the moving Dreams of a Life (2011), in which Joyce Vincent’s body lay undiscovered in a Wood Green flat for three years, or where, more recently, the subject of Amy (2015) spent her last lonely hours.

Romantic comedies of varying quality have been inspired by north London. About a Boy (2002), the best comedy Hugh Grant ever appeared in, is set around Clerkenwell and Kentish Town, Camden plays itself to great effect in This Year’s Love (1999), boasting a terrific comedy performance from Kathy Burke, while the richer, and some might say smugger, side of Highgate was represented in the BAFTA-winning but hugely irritating Truly Madly Deeply (1990). The chattering classes of Belsize Park were on the receiving end of much bile and perverse fascination from the creepy protagonist of Notes on a Scandal (2006), played by Judi Dench.

What else got missed from the list below? Withnail & I (1987) may be set in Camden, but most of the London scenes were filmed in Notting Hill. Venus (2006) got Peter O’Toole his last Oscar nomination, but aside from his performance, it’s not particularly memorable. It’s tempting to include a James Bond film to add some glamour, but a car chase in Brent Cross Shopping Centre’s car park sadly wasn’t enough to justify the inclusion of Tomorrow Never Dies (1997). 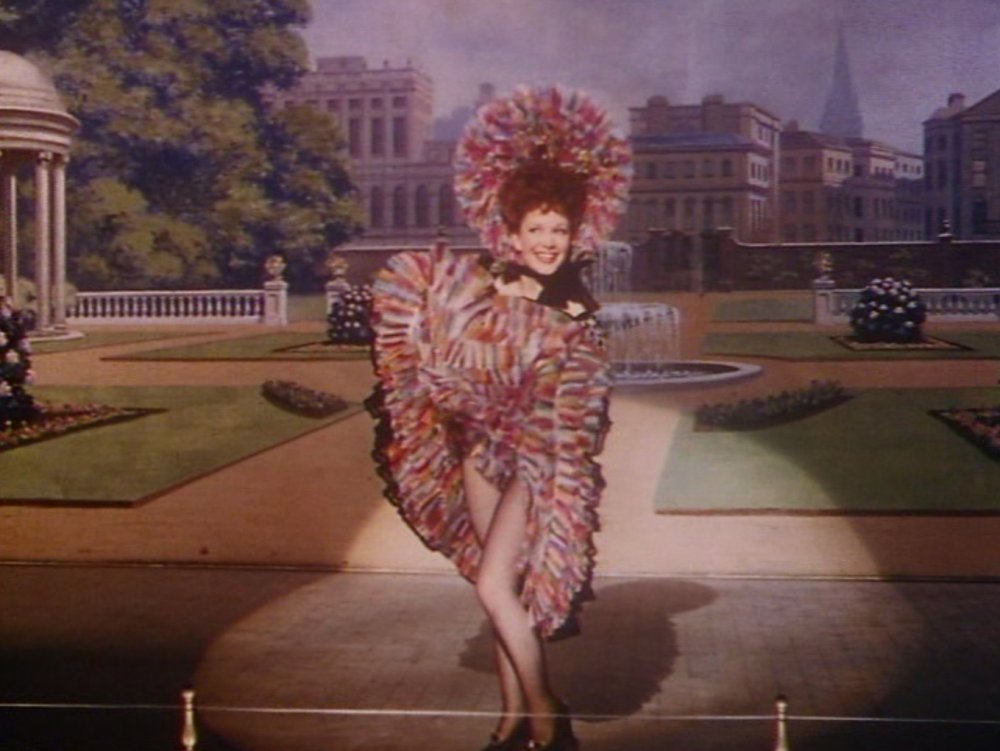 Any film with heroines named Trottie and Bouncie is off to a flying start, and this bawdy musical starring Jean Kent as a turn-of-the-century musical hall star is a riot throughout. Kent seizes the role of a girl who just wants to have fun with gusto, from her precocious Camden childhood to belting out showtunes at the Old Bedford Music Hall, winning a host of male admirers on the way.

This is a film that loves women – the female characters trump the rather stuffy men, and the film has a surprisingly amused view of marital infidelity, at least when conducted by the wives. Its celebratory and unpatronising view of its working-class heroes is similarly unusual for the time. The scene where Trottie wins over her snooty mother-in-law at a posh soirée is a delight. 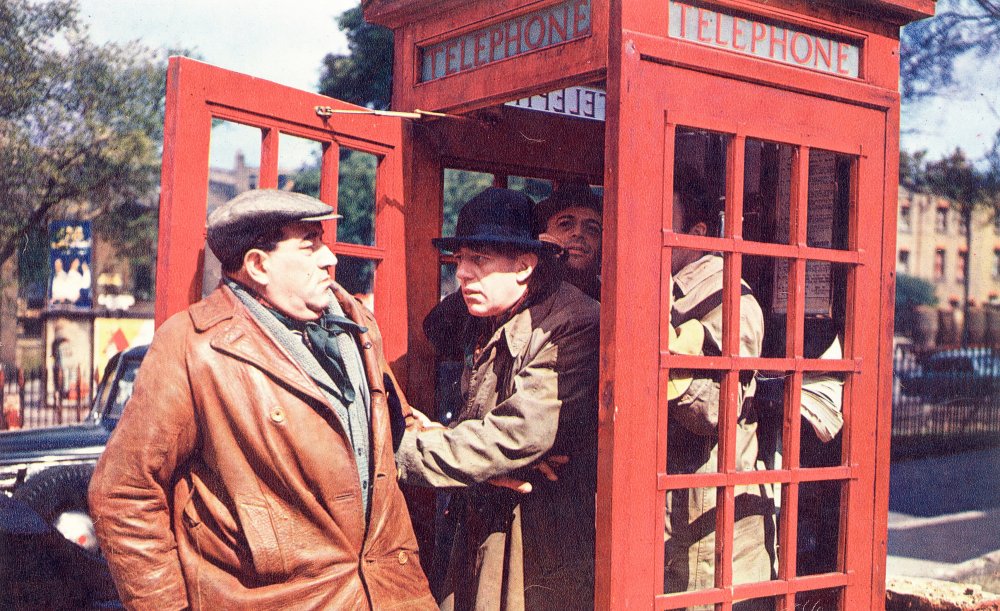 Not many films in which most of its characters meet violent deaths can boast a U-certificate, but Ealing was no normal film studio. This marvellous black comedy follows a gang of robbers ploting to kill a sweet old lady, who threatens to inform the police about their recent theft. It’s perfectly pitched throughout, with Katie Johnson’s Mrs Wilberforce oblivious to the murderous intentions of the criminals around her, including Alec Guinness and Peter Sellers.

The film makes excellent use of now unrecognisable locations around King’s Cross and St Pancras, from the theft of the loot to the eerie final sequence, where two characters fight to the death above the railway. And the ending is just wonderful.

‘Cool’ and ‘north London’ don’t usually go together, but 30 minutes at Wood Green Jazz Club, courtesy of Karel Reisz and Tony Richardson, may change your mind. It details a night at the club, as working-class Londoners flock to the venue for a wild night of dancing to Chris Barber’s Jazz Band. Like many other Free Cinema films (documentaries that broke free from traditional non-fiction filmmaking), it shows the emerging ‘youth culture’, a term unheard of before the 1950s. Reisz captures the thrill and freedom of the night, only threatened by a group of rich kids who enter the club, who seem awkward and stiff in comparison with the jiving youngsters.

Both Reisz and Richardson went on to make key fiction works of British cinema – Reisz with Saturday Night and Sunday Morning (1960), Richardson with A Taste of Honey (1961) and The Loneliness of the Long Distance Runner (1962). 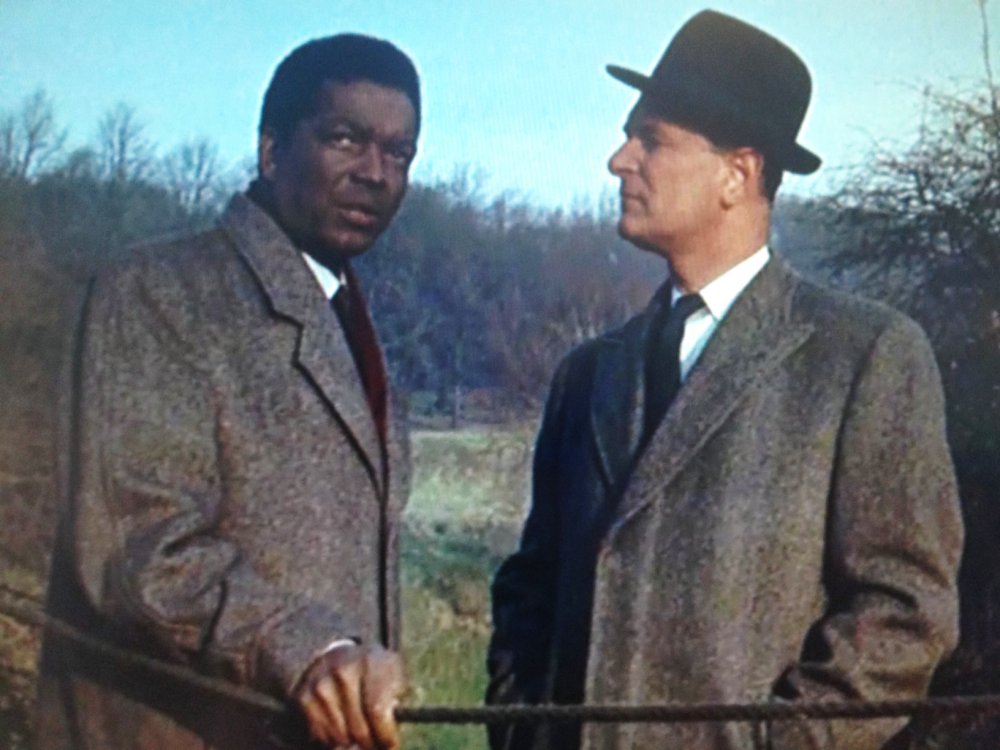 Made soon after the 1958 Notting Hill riots, Basil Dearden’s timely Sapphire holds a mirror up to contemporary British society and exposes its racism – one scene in which a gang of Teddy boys beat up a black victim in Soho is particularly disturbing. But it’s in north London where a racist murder appears to have taken place, when the corpse of a black woman, who appears to be white, turns up on Hampstead Heath. Several scenes involving her boyfriend’s possibly guilty family take place around Kentish Town and Tufnell Park.

The film is at its best when it expresses the everyday of racism of its characters, particularly landlords reluctant to lose business by accepting business from black people. Two years later, Dearden would make another liberal-minded film that would be a cinematic landmark – Victim (1961), a fearless drama that offered a sympathetic view of gay men, made when male homosexuality was illegal. 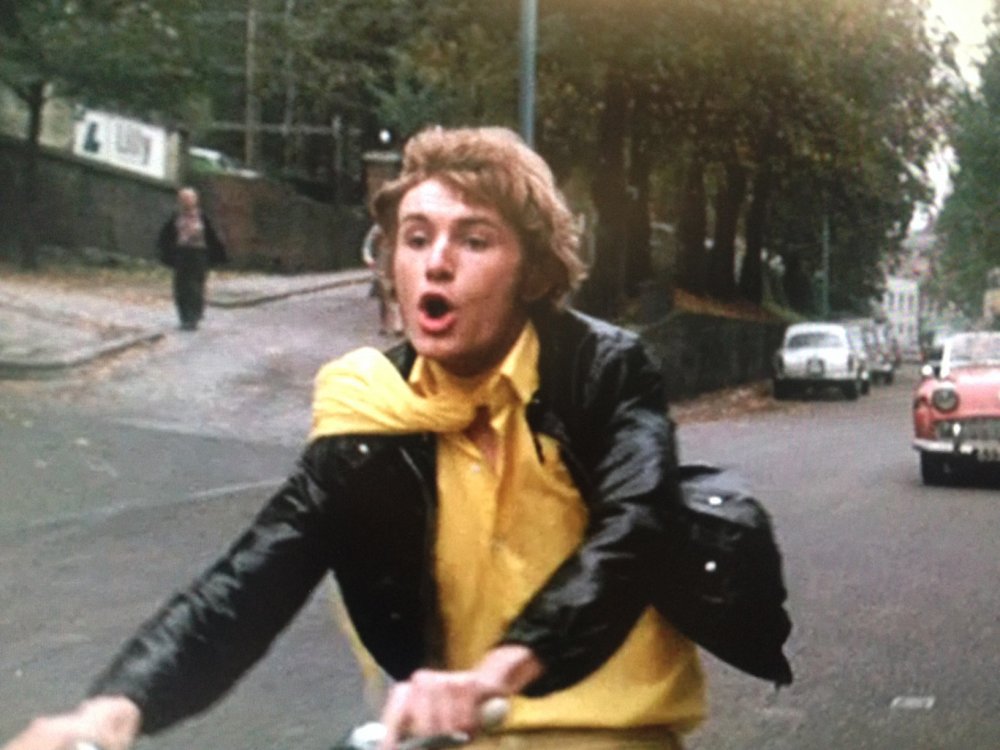 A real curio, this (very) 60s musical short follows a young man who falls in love with a model in a poster, then the model herself, and then walks off with her into the sunset. But you don’t watch Les Bicyclettes de Belsize for its plot, but for its jaunty soundtrack, its vibrant fashions, and, best of all, its marvellous use of north London locations (Hampstead Village for the most part, despite the title).

An affectionate parody of The Umbrellas of Cherbourg (1964), mingling New Wave chic with bawdy British humour (many raspberries are blown), it is jam-packed with infuriatingly catchy songs – the title song became a hit for Engelbert Humperdinck. It was shown in cinemas, bizarrely, alongside Twisted Nerve (1968), a disturbing psychological thriller about a serial killer. 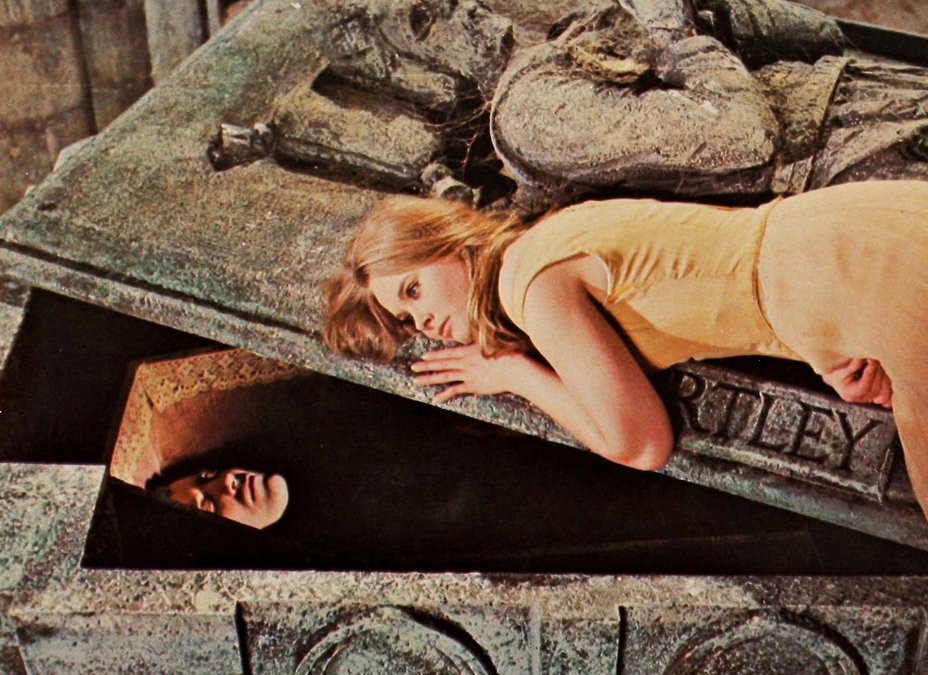 Highgate Cemetery guest-starred in many horror films in the early 1970s, including The Abominable Dr. Phibes (1971) and Tales from the Crypt (1972), but its best gothic appearance is in this superior Hammer horror, where it houses the crypt where the resurrection of Christopher Lee’s Count Dracula takes place. It’s not the only north London landmark on offer, with an early scene shot at a church in Totteridge, Barnet.

The film is scathing about hypocrisy and sexual repression – the scene where a brothel-visiting Victorian gentleman, having drunkenly tried to whip his daughter for imagined debauchery, meets his comeuppance, is a highlight, as is the scene where a woman about to receive a stake through the heart instead turns the table on her male prey. Ralph Bates has a lot of fun as a decadent lord. 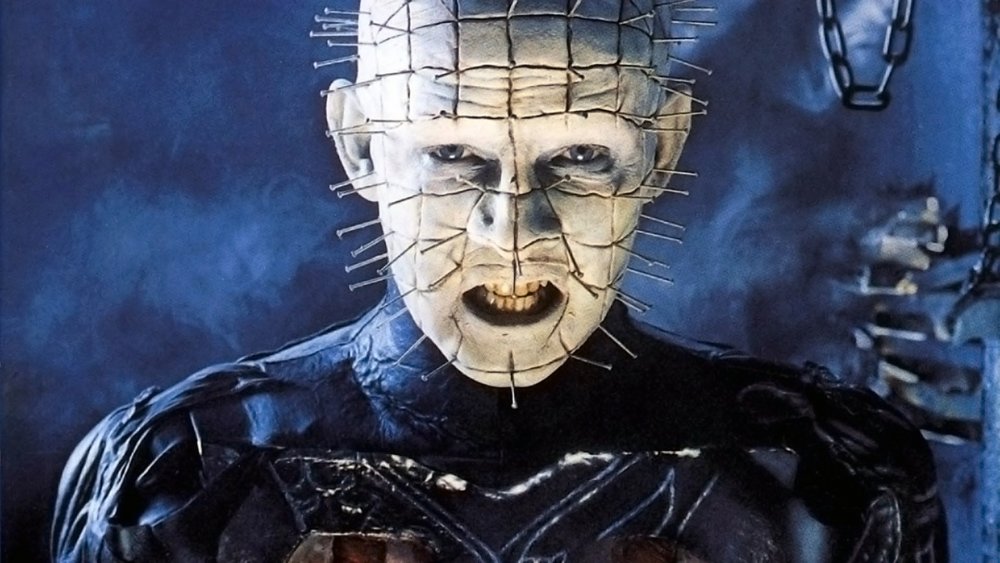 Hell is a place on earth – and that place is Dollis Hill. The gateway to a world of extreme sadomasochism is opened in a ramshackle house, unleashing the terrors of the Cenobites, horrifying creatures that feed on suffering. The connection to north London doesn’t end there – interiors were filmed at the short-lived Production Village in Cricklewood, while horror author Clive Barker, who also directed the film, was based in Crouch End.

Shot on a low budget, the film was a huge success, and spawned eight not-very-good sequels. The original holds up very well, and the Cenobites, particularly their leader, Pinhead, remain unnervingly horrible creations. The death scenes – and there are many – are surprisingly nasty for a film that found a mainstream audience. 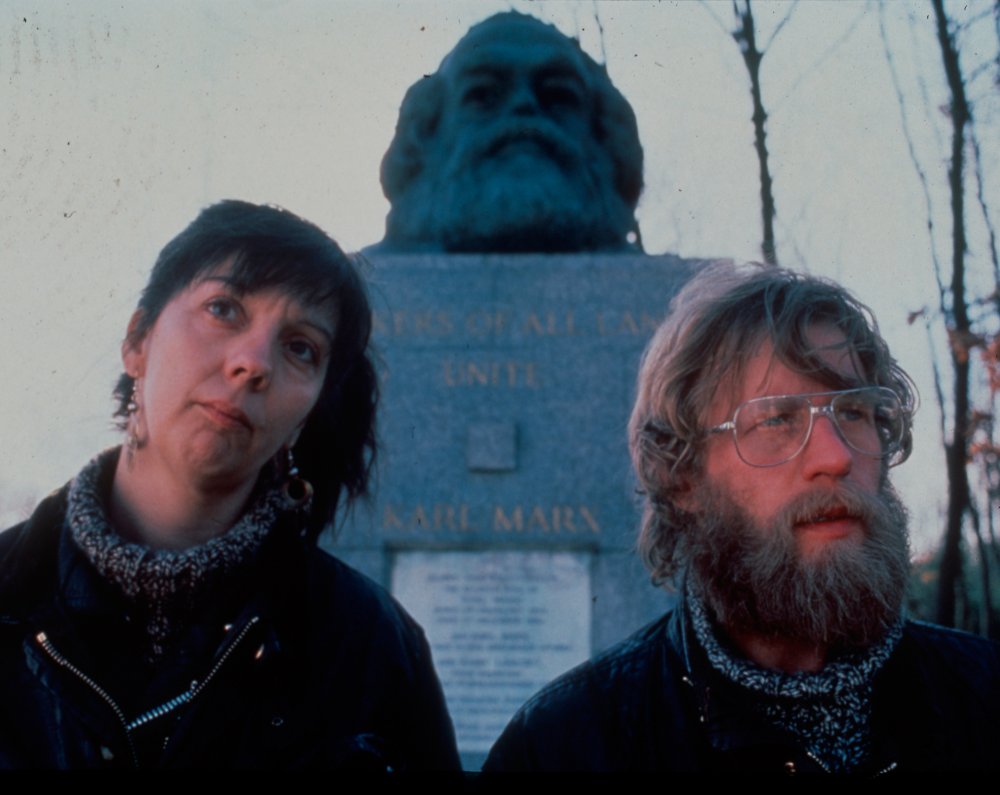 Mike Leigh can’t stay away from north London, using it as the backdrop for some of his most acclaimed films, including Secrets & Lies (1996), Career Girls (1997) and Happy-Go-Lucky (2008). High Hopes is one of his angriest films, with unapologetic disgust at the pretensions and shallow aspirations of the nouveau riche, a product of Thatcher’s Britain. The cruel caricatures, particularly those presented by Heather Tobias and Lesley Manville, are among Leigh’s broadest.

Set around King’s Cross, an area that has changed hugely over the decades, High Hopes also has plenty to say about the lack of action of the left (a criticism hugely relevant today). The film’s hero, Cyril (Philip Davis), may despise rightwingers and pay tribute to Marx’s grave in Highgate Cemetery, but his inaction is precisely what leads to the flourishing of those he despises. The film ends on an optimistic and very moving note, but despite its comic set pieces, its intentions are very serious. 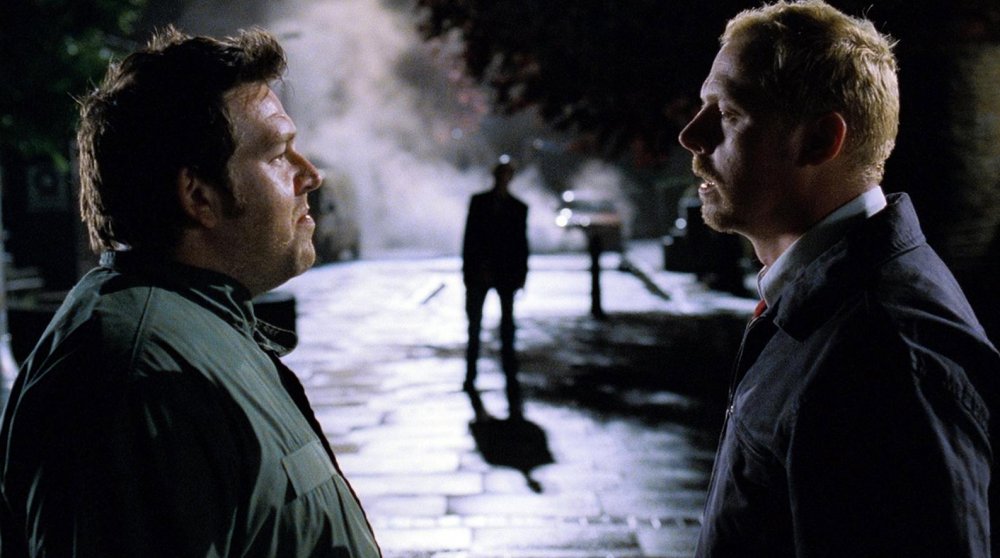 Where better to film the zombie apocalypse than Crouch End? Post-Spaced (1999-2001) and pre- a slightly fluky Hollywood career, Simon Pegg co-wrote this hugely successful comedy with director Edgar Wright, before the conceit of man-boy slackers defeating a world-endangering threat became a lazy blockbuster staple. Shaun of the Dead is still fresh over 10 years on, thanks to the high regard Wright and Pegg have for classic zombie flicks, particularly, of course, the work of George A. Romero. If you’re going to make a great parody, you have to love the source material you are sending up.

It’s mix of blokey comedy and gruesome horror was a huge hit with audiences, and led to further collaborations with Wright and Pegg – the funny Hot Fuzz (2007) and the tiresome The World’s End (2013). Shaun of the Dead remains their finest hour. 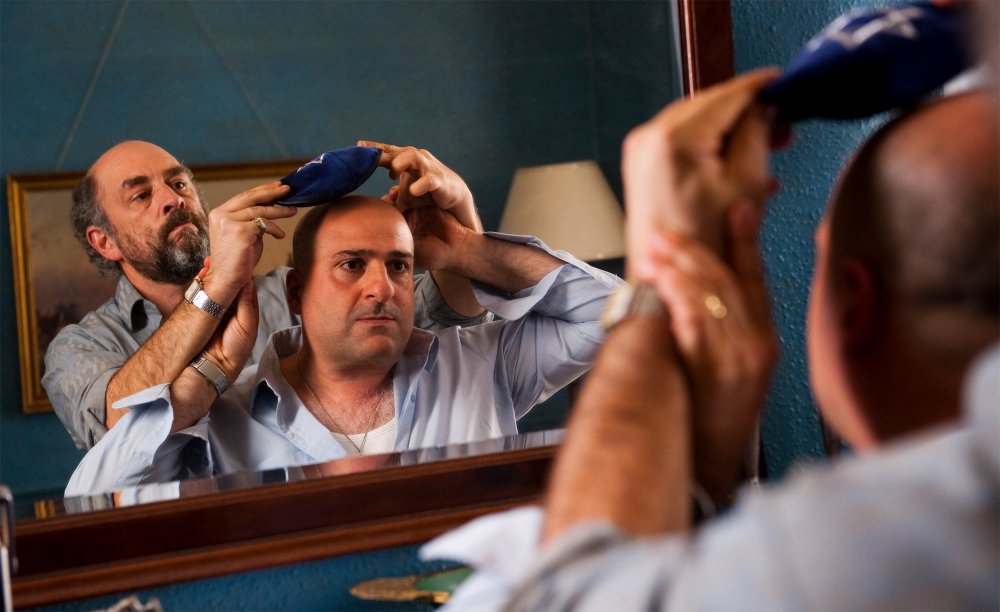 What is the best film about north London’s Jewish communities? The Barber of Stamford Hill (1962) is beautifully acted, but is too studio-bound. The beloved Bar Mitzvah Boy (1976) is very touching, but was made for TV. Suzie Gold (2004) had its moments, but traded too heavily on stereotypes. And Josh Appignanesi’s Song of Songs (2005) was good, but too relentlessly serious to make its characters relatable. Five years later, though, Appignanesi made one of the funniest British comedies of recent years – The Infidel.

Written by David Baddiel, it follows a north London Muslim taxi driver (Omid Djalili) who is, initially, horrified when he discovers his father, residing in a Golders Green nursing home, is Jewish. He attempts to connect to his ancestory through learning ‘how to be Jewish’, with the help of a fellow cabbie, played by the excellent Richard Schiff. The edgy humour takes risks most comedies shy away from, and its satire of Islamophobic and antisemitic attitudes is unforgiving.