This list contains four best picture winners, and the one-time most successful film ever made. 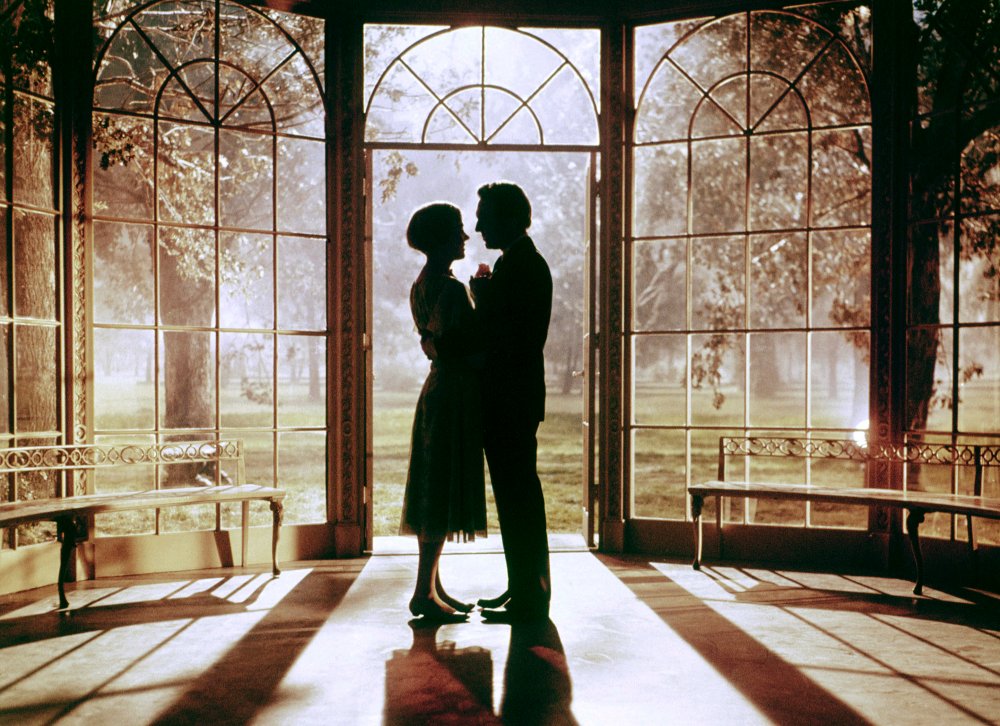 Since movies first learned to talk, the screen musical has provided a euphoric display of cinematic escapism. It’s a genre that defined a whole era of Hollywood’s glory days, from the 1930s to the 1950s. Yet by the dawn of the 1960s, it was clear that the times were a-changin’.

The new decade brought tectonic political shifts, the quickening rise of rock and pop music, and the emergence of a youth counterculture. In this evolving world, the Hollywood establishment’s big-budget musicals risked looking passé, staid or uncool. Mould-breaking movies such as Bonnie and Clyde (1967) and The Graduate (1967) signalled a shift towards greater realism and intensity. The world of feathers and chorus lines was out.

Yet the 60s was also the era in which many of film history’s most successful and adored musicals were born – with no fewer than four of the films listed below also winning the Oscar for best picture. Drawing crowds that Hollywood’s hipper output could only dream of, the studio system bet all-or-nothing on ever-expanding showstoppers, often avoiding risk by adapting already popular theatre hits (Gypsy, 1962; Hello, Dolly!, 1969).

These blockbuster event movies gave career-defining roles to a new generation of bright young stars, including Julie Andrews, Barbra Streisand, Natalie Wood and Audrey Hepburn. The biggest of them all was The Sound of Music (1965), which became the most successful film of its decade, and, indeed, ever.

With this Julie Andrews classic back in cinemas, here are 10 of the 60s’ greatest hits – from Hollywood and beyond. 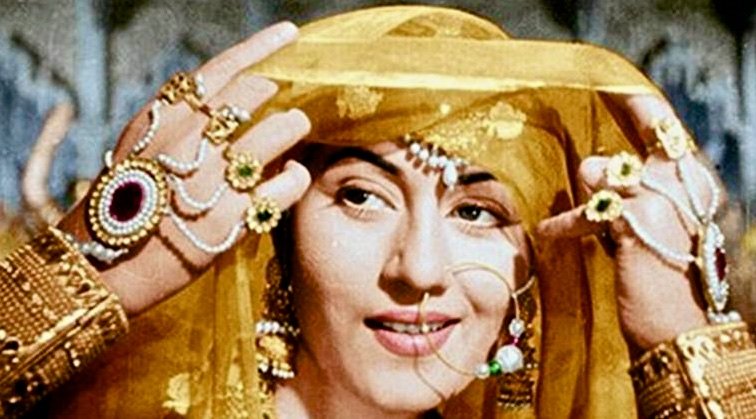 This classic Hindi historical romance from director K. Asif remains one of the most groundbreaking and iconic in Bollywood’s long history of musical spectaculars. It’s the epic tale of 16th-century Prince Saleem (Dilip Kumar), whose love for beautiful court dancer Anarkali (Madhubala) is the catalyst for a monumental battle between the prince and his disapproving father, the Mughal Emperor Akbar. With a turbulent production, Mughal-e-Azam took almost 16 years to complete, becoming the most expensive Indian film yet made.

Its ambition is apparent in every opulent scene, with glitteringly grand sets and breathtaking battle scenes. A stand-out moment comes with the now immortal Sheesh Mahal (Hall of Mirrors) scene, as Anarkali’s dance for the prince is reflected in the tiny glass mirrors on a set so intricate that it took two years to construct. 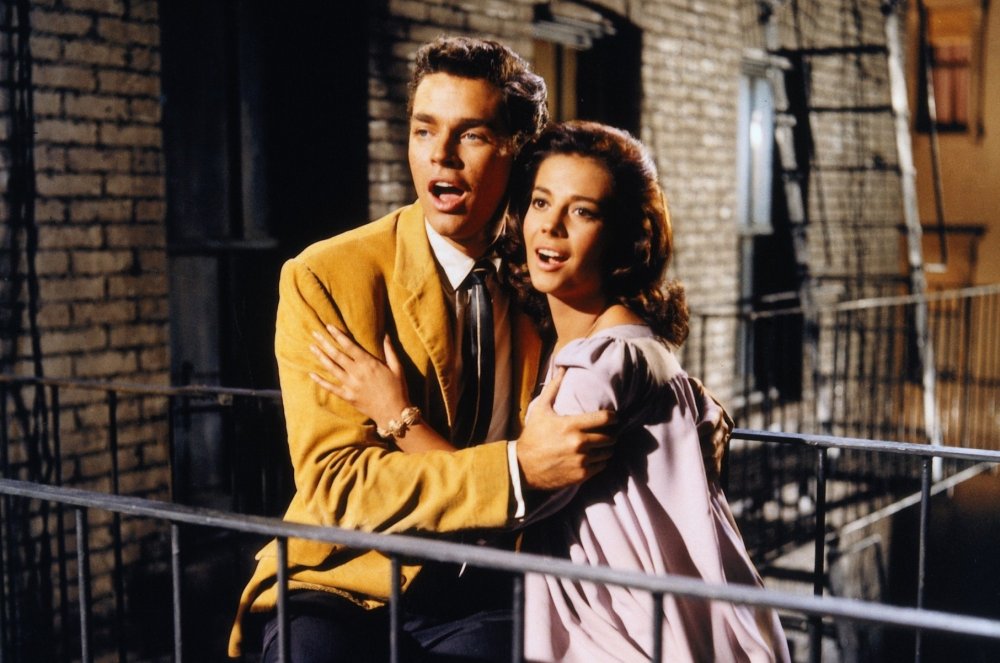 Leonard Bernstein and Stephen Sondheim’s updated version of Romeo and Juliet moved the star-crossed lovers to the streets of the Upper West Side, swapping Shakespeare’s warring families for rival gangs – the Jets (Polish-American children of immigrants) and the Sharks (Puerto Rican immigrants).

Although the best picture-winning film version has a pro-immigration message, there are dated racist tropes in its use of ‘brownface’ on actors for the Puerto Rican characters – Rita Moreno was the only Puerto Rican actor and was also painted with brown makeup. Yet West Side Story otherwise remains a stylish and accomplished treat, with Jerome Robbins’ powerful, dynamic choreography bringing heart-thudding energy to the gangs as they jump, jive and snap their fingers to the crackling score. And what a score! Combining intricate jazz and Latin American beats, the songbook boasts classics such as ‘Tonight’, ‘Maria’, ‘America’ and the desperately romantic ‘Somewhere’. 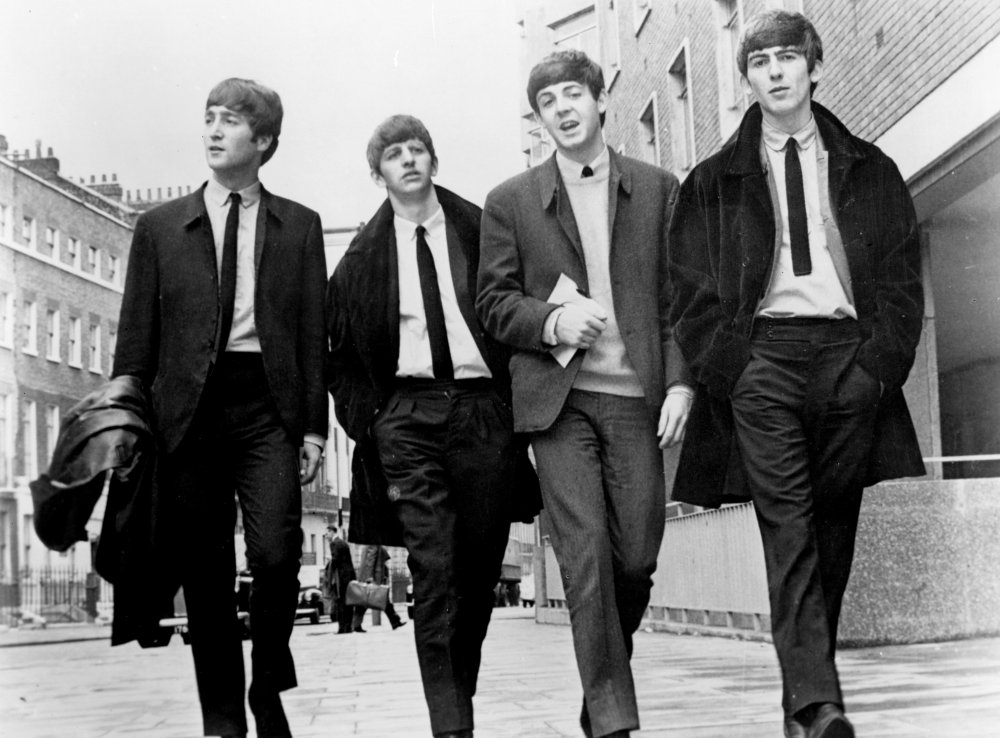 Beatlemania is in full throttle in this ‘behind the scenes’ peek at a day in the life of the the Fab Four. Galavanting around swinging London, the band drop silly and surreal one-liners while picking at the social constructs of the time. More than half a century on, it’s impossible not to fall in love all over again with the anarchic, riotous charm of John, Paul, George and Ringo. And of course, the songs are wonderful, having never aged or tired; they keep on coming with ‘Can’t Buy Me Love’, ‘She Loves You’ and that instantly recognisable first chord of the title track.

Richard Lester (known fondly as the ‘father of MTV’) captures the palpable sense of excitement of changing times in a film that took from the new wave of France and the kitchen sink of Britain to revolutionise the movie musical. Its fast cuts and handheld cameras created a new sense of realism, while cementing a place for rock’n’roll and pop on the cinematic jukebox. 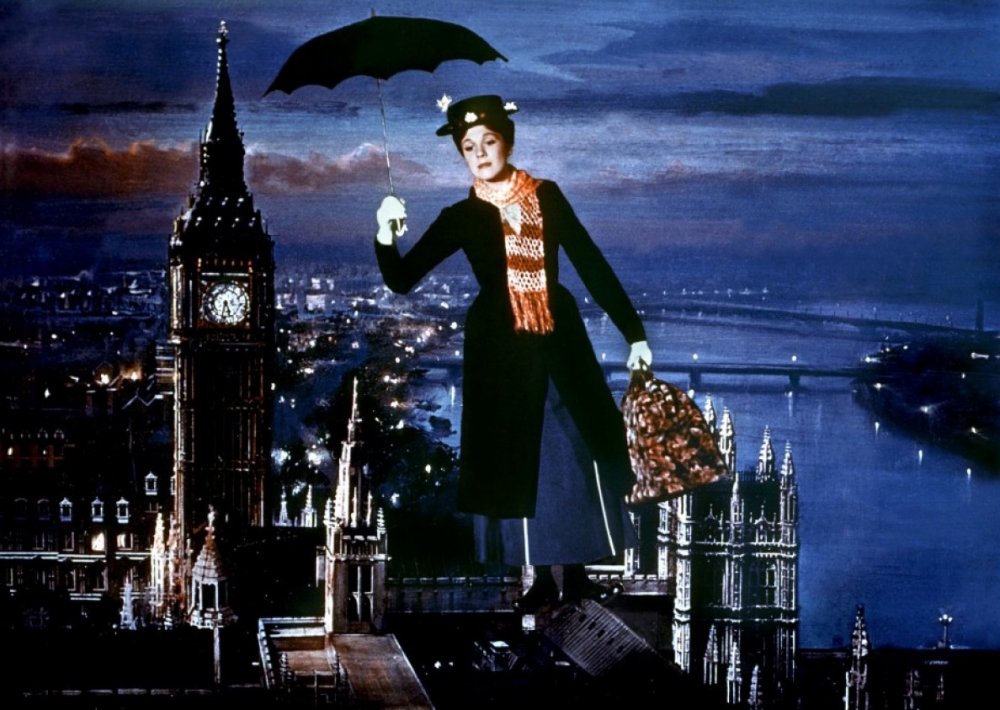 This beloved Disney adaptation of the P.L. Travers children’s books stars a practically perfect Julie Andrews as the magical nanny of mischievous but neglected Jane and Michael Banks. Descending upon their Edwardian townhouse, she promises to stay until the wind changes, but truthfully – and heart-wrenchingly – until their banker father (David Tomlinson) learns how to love them.

With enchanting effects and animated sequences, Poppins and her friend Burt (played by Dick Van Dyke, whose oft mocked accent merely adds to the charm) take the children on fantastical adventures to floating tea parties and fun fairs in paintings, working their way through the Sherman brothers’ Oscar-winning musical score. From the raucous fun of ‘Supercalifragilisticexpialidocious’ to the addictive foot tap of ‘Step in Time’ over the soot covered London rooftops, every song delights. Yet the sweeping majesty of ‘Feed the Birds’ is the emotional peak of the film – it’s a swelling lullaby that Richard Sherman was, quite rightly, most proud of. 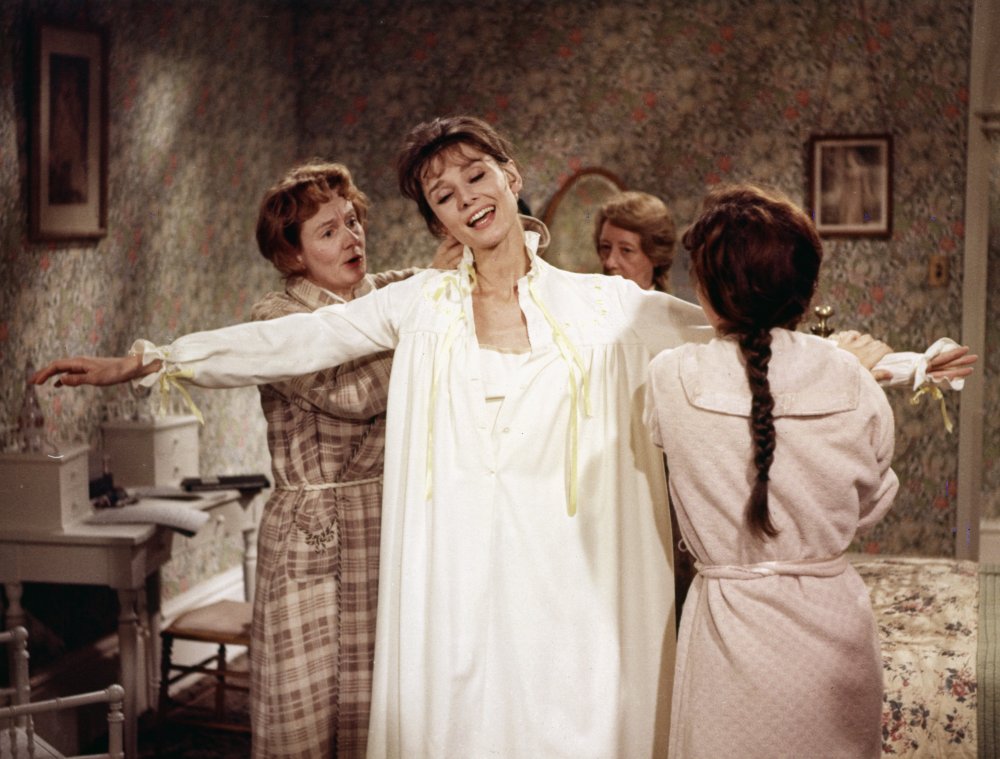 This eight-time Oscar winner (including best picture) is a lively incarnation of the Broadway stage show, itself based on George Bernard Shaw’s 1913 play Pygmalion. It features Rex Harrison reprising his award-winning on-stage role as Professor Henry Higgins, who bets he can pass off cockney flower girl Eliza Doolittle (Audrey Hepburn) as an aristocrat. Famously, Hepburn beat Julie Andrews (who had played Eliza on Broadway) to her part, only to later miss out on the Oscar to Andrews’ Mary Poppins.

Directed with confident aplomb by Hollywood stalwart George Cukor, My Fair Lady remains immense fun, with timeless songs that have ingrained themselves on our consciousness perhaps even more than the film itself. Highlights include Stanley Holloway’s ‘Get Me to the Church on Time’, ‘The Rain in Spain’, ’I Could’ve Danced All Night’ and Cecil Beaton’s outrageous millinery creations for the famous Ascot races sequence. 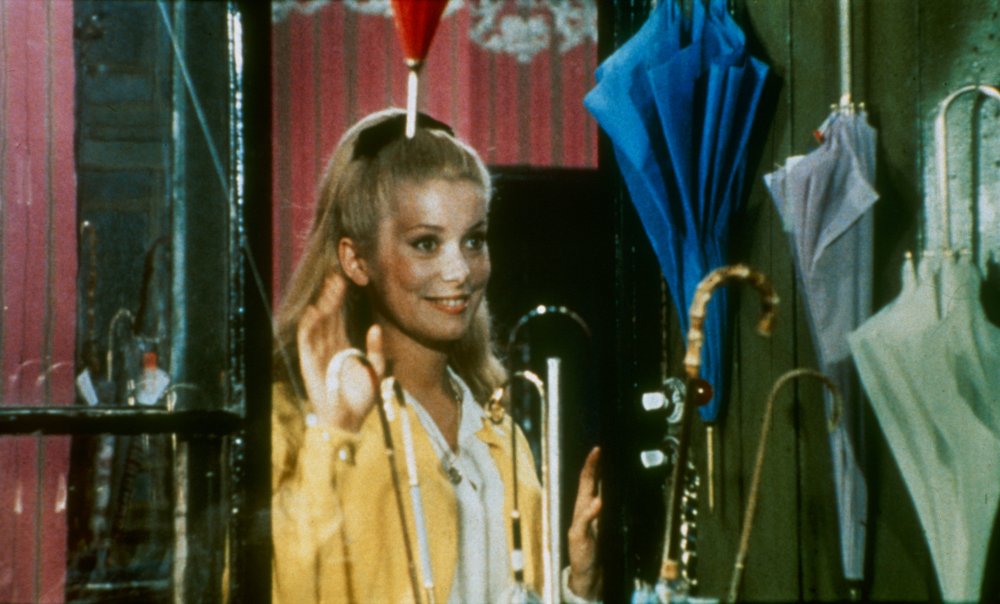 French New Wave director Jacques Demy’s eye-popping masterpiece was a huge success in France, winning the Palme d’Or and making an international star of the young Catherine Deneuve. Innovative and imaginative in a multitude of ways, it was one of the first films to use a more operatic form, with a conversational style of singing, no spoken dialogue and an elegant, deeply romantic score by composer Michel Legrand.

Deneuve stars as Geneviève Emery, the umbrella shop girl who falls hopelessly in love with Guy Foucher (Nino Castelnuovo), the local mechanic who must leave her to fight in the Algerian war just as she becomes pregnant with his child. The inevitably of their eventual parting is painfully melancholic, and overwhelmingly affecting when paired with the vibrant and bold colour palette. Bewitching to behold, and – like Demy’s subsequent classic The Young Girls of Rochefort (1967) – a work of everlasting beauty. 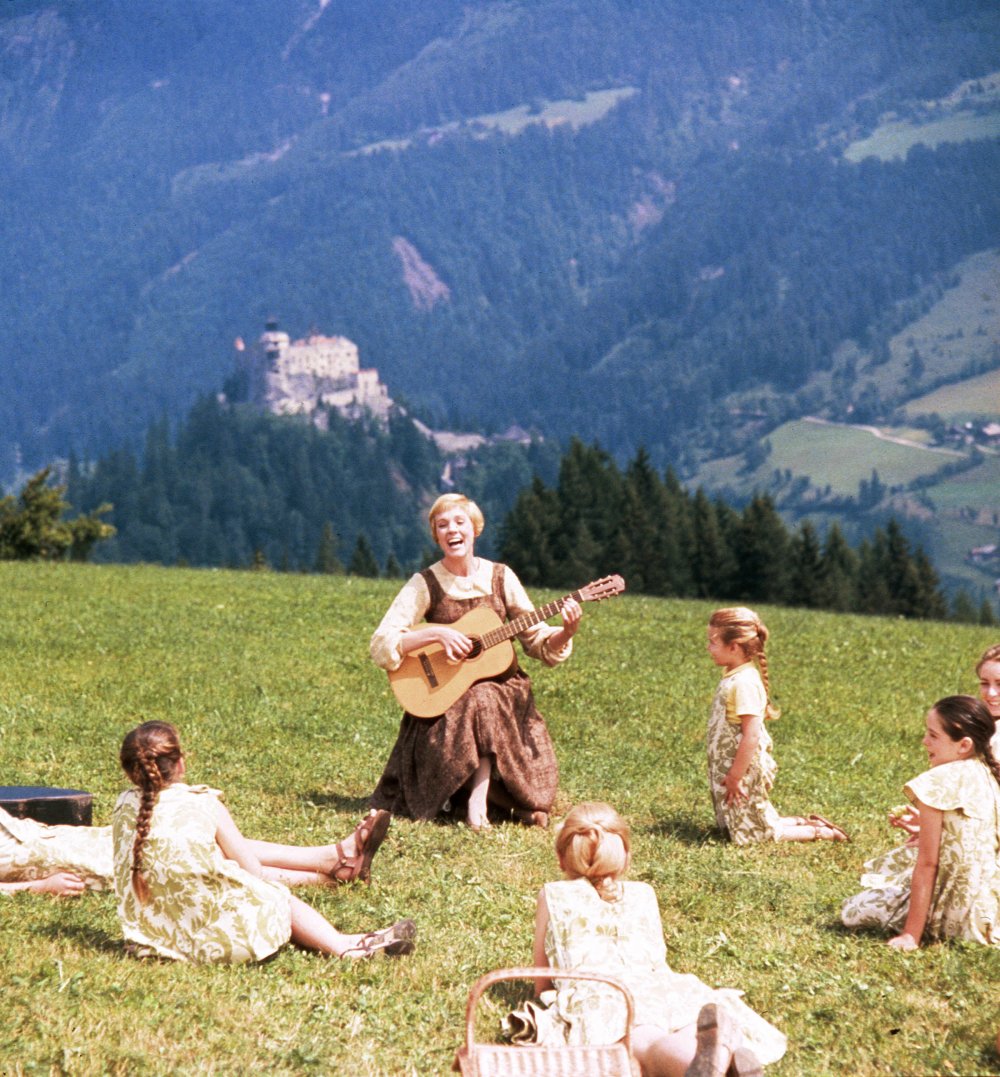 A huge success at the time, and another winner of the Oscar for best picture, Robert Wise’s transcendent adaptation of Rodgers & Hammerstein’s 1959 musical remains one of the best-loved and most rewatched films ever made. Set against the backdrop of an Austria about to lose itself to Nazism, and filmed on location among the fountains and churches of Salzburg, it tells the story of Maria (Julie Andrews), the free-spirited trainee nun who is sent to look after the seven children of the widowed Captain von Trapp (Christopher Plummer).

With its sweeping shots of a sumptuously green alpine landscape, pitch-perfect performances from its stars and one of the most memorable collection of songs ever to grace the musical songbook (from the opening title song to ‘My Favorite Things’ and on), it makes for stirring, cynic-proof viewing. 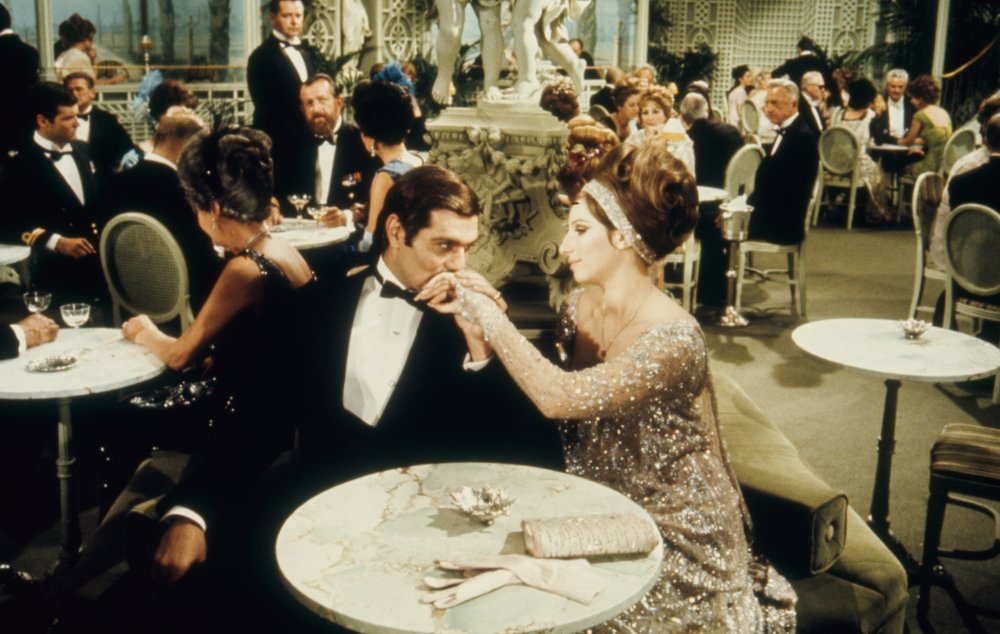 Barbra Streisand won an Oscar (tied with Katherine Hepburn for The Lion in Winter) for this mesmerising screen debut, proving to the world that she could act as well as sing. Directed by Hollywood veteran William Wyler, the biography of actor-comedian Fanny Brice charts her rise from failing chorus girl to Broadway stardom and her doomed romance with handsome and charismatic gambler Nick Arnstein (Omar Sharif). The pair’s sexual chemistry radiates off the screen, no doubt aided by their off-screen affair, at the time causing huge controversy over the Egyptian Sharif and the Jewish Streisand appearing together during the Israeli-Egyptian six day war.

Funny Girl is undeniably passionate, and though it doesn’t feature the greatest set of classic songs, ‘Rain on my Parade’, ‘My Man’ and ‘People’ are the perfect ballads to showcase the unbelievable range that made Streisand such a star. 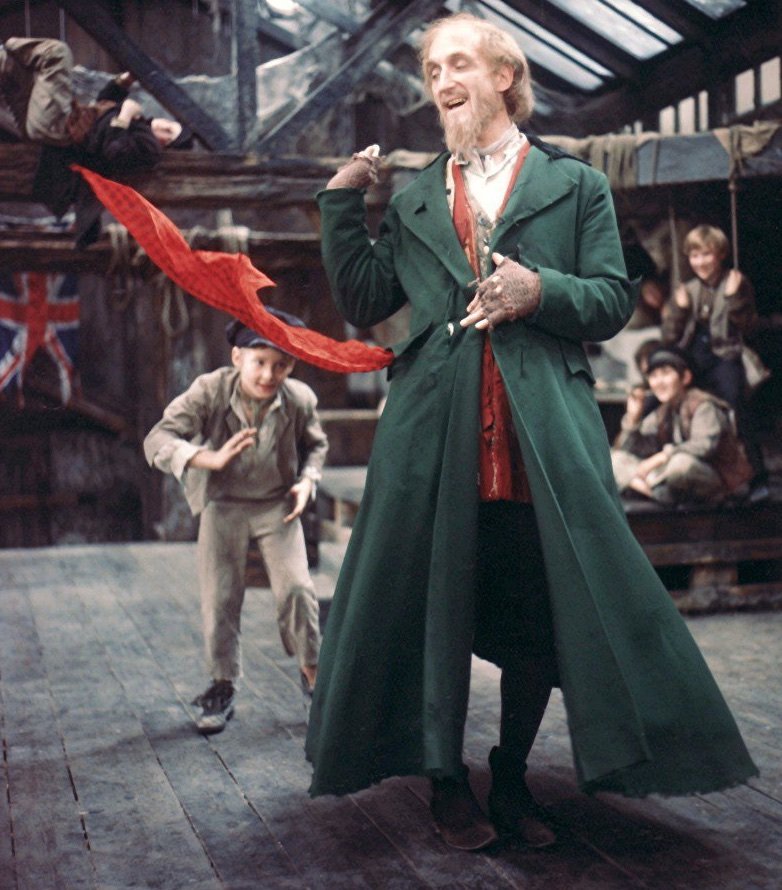 With music and lyrics by Lionel Bart, Third Man director Carol Reed brings an irresistible flourish to the Oliver Twist story. With Oliver Reed as the menacing Bill Sykes, Shani Wallis as Nancy and cameos from Harry Secombe and Leonard Rossiter, there are many pleasures amid the casting. But it’s Ron Moody’s turn as Fagin that really steals the show. Early in the preparation for the original 1960 stage show, Moody and Bart had made a conscious decision to move the character away from the antisemitic stereotype of both Charles Dickens’ novel and Alec Guinness’s depiction in David Lean’s 1948 adaptation.

Fagin is also graced with the catchiest musical numbers, ‘You’ve Got to Pick a Pocket or Two’ and ‘Reviewing the Situation’, but the songbook is brimming with unforgettable tunes. Other joys come from the Artful Dodger’s high-spirited welcome to Oliver in the extravagant set piece for ‘Consider Yourself at Home’ and the wonderful ensemble number ‘Who Will Buy?’

The era of the grand-scale musical was coming to an end, however, and Oliver! was the last song-and-dance movie to win the Oscar for best picture for more than 30 years (a trend ended by Chicago in 2003). 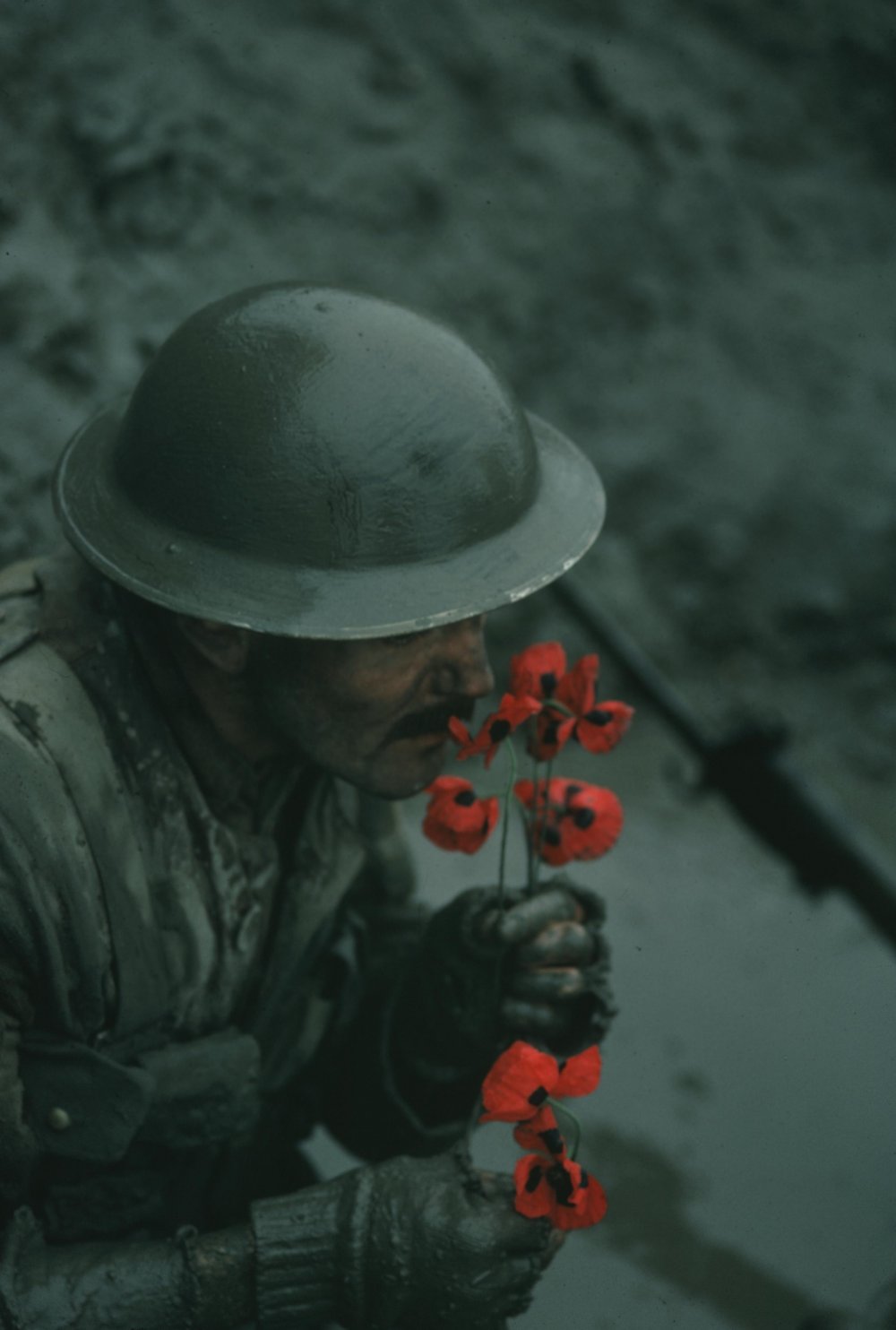 Richard Attenborough’s directorial debut brought Joan Littlewood’s 1963 musical satire of the same name to the big screen with a who’s who of 1960s British talent, including Dirk Bogarde, Maggie Smith, John Gielgud, Ian Holm and many Redgraves. As the young members of the fictional Smith family are gradually disenfranchised by the brutality and reality of the First World War, popular vaudeville songs from the era such as ‘It’s a Long Way to Tipperary’, ‘Goodbye-ee’ and ‘I’ll Make a Man of You’ are sharply turned on their heads to critique the war and the bureaucratic failings that came with it.

A cutting social commentary on the unbearable loss of life and the callous attitudes from the people at the top of the British establishment, Oh! What a Lovely War sits beside Owen, Sassoon, Faulkes and Blackadder in the canon of WW1 student texts and satirical milestones.