Phantoms on the marshes, lonely lighthouses and dangerous country paths feature in our Halloween list of buried folk-horror treasures. 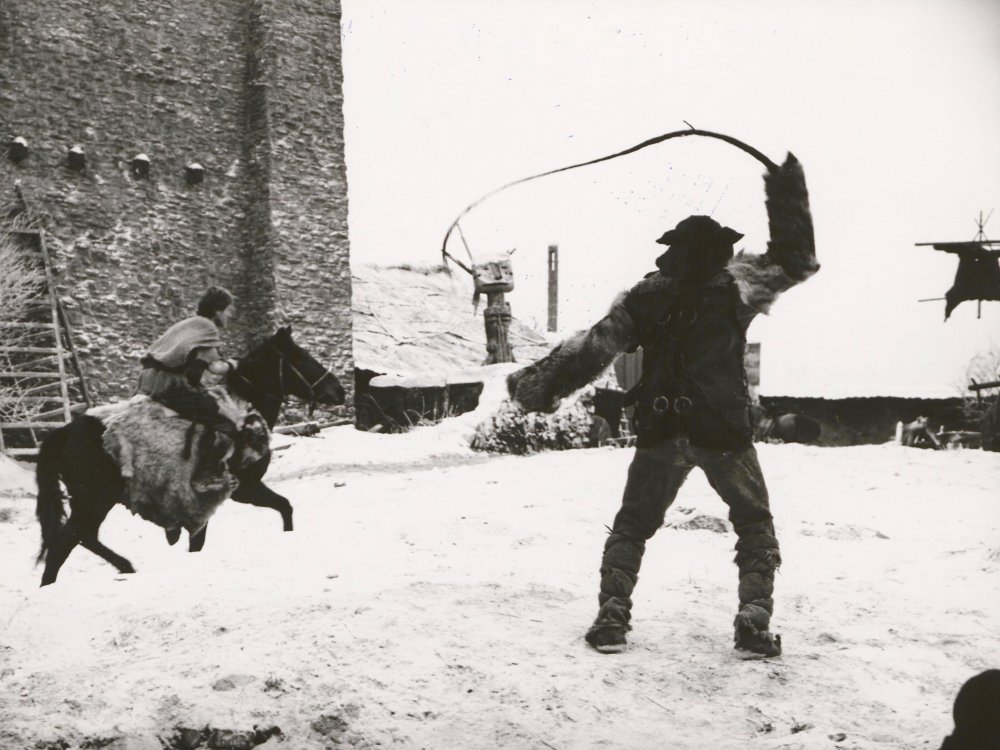 Looking back on the 2010s, it’s difficult to think of a genre that’s grown so rapidly in popularity as folk horror. Although most of the work often discussed under the banner was made decades previously, it’s a term that’s really come of age among its various internet communities in recent years.

Much of the discussion around folk horror focuses on defining this loose body of film and TV, and deciding what’s in and what’s out. There are certainly a number of key characteristics that often crop up. Landscape is essential to many folk horror narratives, isolating communities and individuals – the latter often city interlopers. Esoteric belief systems and lapses of morality are also key, sometimes simply leading to a very human (‘folk’) violence, other times leading to more supernatural occurrences. These stories also have a penchant for ancient religions, occultism, superstition, cursed objects, sacrificial rituals and ghostly malevolence, and films of the genre often switch between an array of these pulpy but effective tropes.

Most discussions jump off from the ‘unholy trinity’, comprising Michael Reeves’ Witchfinder General (1968), Piers Haggard’s The Blood on Satan’s Claw (1971) and Robin Hardy’s The Wicker Man (1973). Then there are oft-cited TV shows, such as The Owl Service (1969), the BBC Ghost Stories and Children of the Stones (1977).

But for anyone wanting to dig a little deeper this Halloween, here are 10 less familiar folk horror titles worth drawing the curtains for. 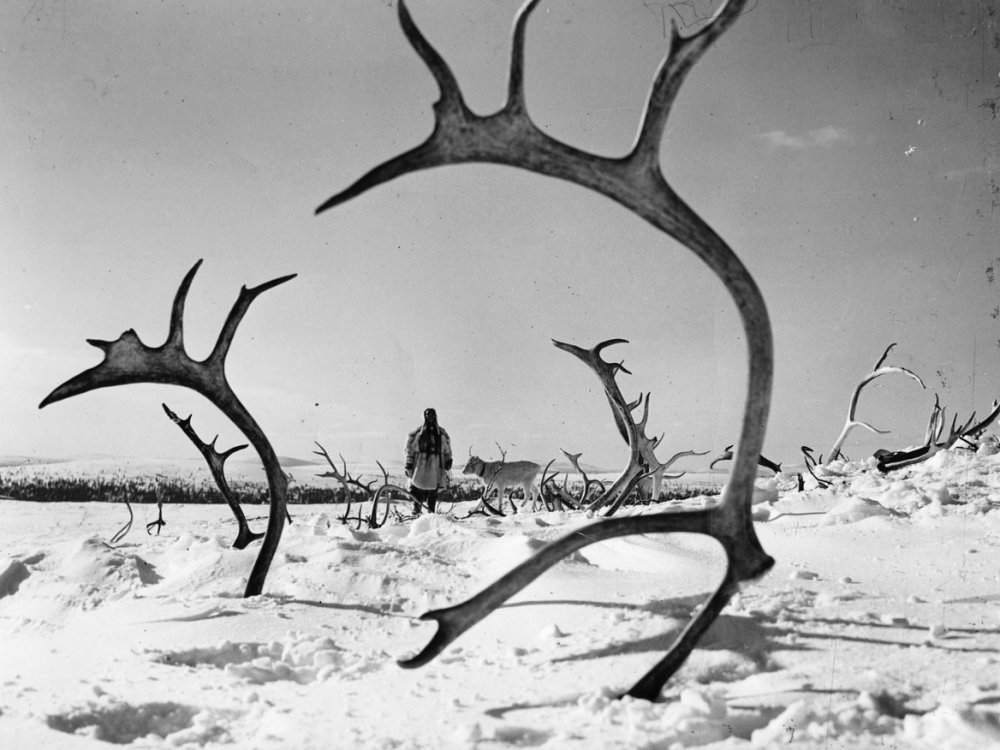 One of the few films that could be described as folk horror to play in competition at Cannes, this delirious Finnish classic has only recently begun to be rediscovered thanks to a new restoration and release on Blu-ray.

The White Reindeer follows the folkloric tale of Laplander Pirita (Mirjami Kuosmanen) who, frustrated by the long absences of her reindeer-herder husband, seeks help with her marriage from a local shaman (Arvo Lehesmaa). After meeting the shaman, however, she finds herself turning into the demonic deer of the title, with a vampiric taste for blood. Replete with startling images of the snow-filled landscapes, Erik Blomberg’s film conjures a sense of genuine dread, combined with a magic realism straight out of the work of Jean Cocteau. Its eerie imagery, especially during the ritual to the supposed ‘stone god’, is still effective today. 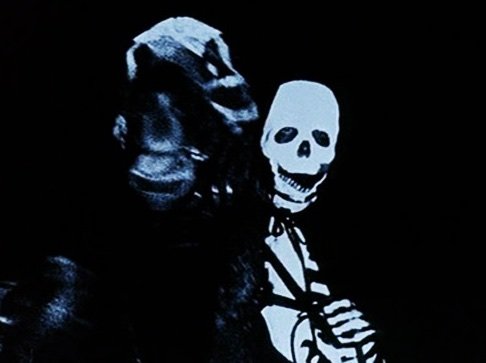 Although better known for his work in British TV, including the classic folk horror series Children of the Stones (1977), Peter Graham Scott also directed films earlier in his career, including this Daphne du Maurier-esque tale of smuggling and skulduggery. Sometimes known under the US release title Night Creatures, the film is one of Hammer Studio’s earlier escapades, set in a village on the Romney Marsh, where phantoms are seen on horseback when the moon is high and the fog is low.

The cause may not be as supernatural as it seems, but Captain Clegg has some of the studio’s most unnerving and effective images of unsettled landscapes, paving the way for later attempts at similar rural atmospheres in John Gilling’s West Country-set 1966 duo The Reptile and The Plague of the Zombies. With the ever reliable Peter Cushing in the lead, and a strong support cast (including an early role for Oliver Reed), it’s among Hammer’s more effective haunted horrors. 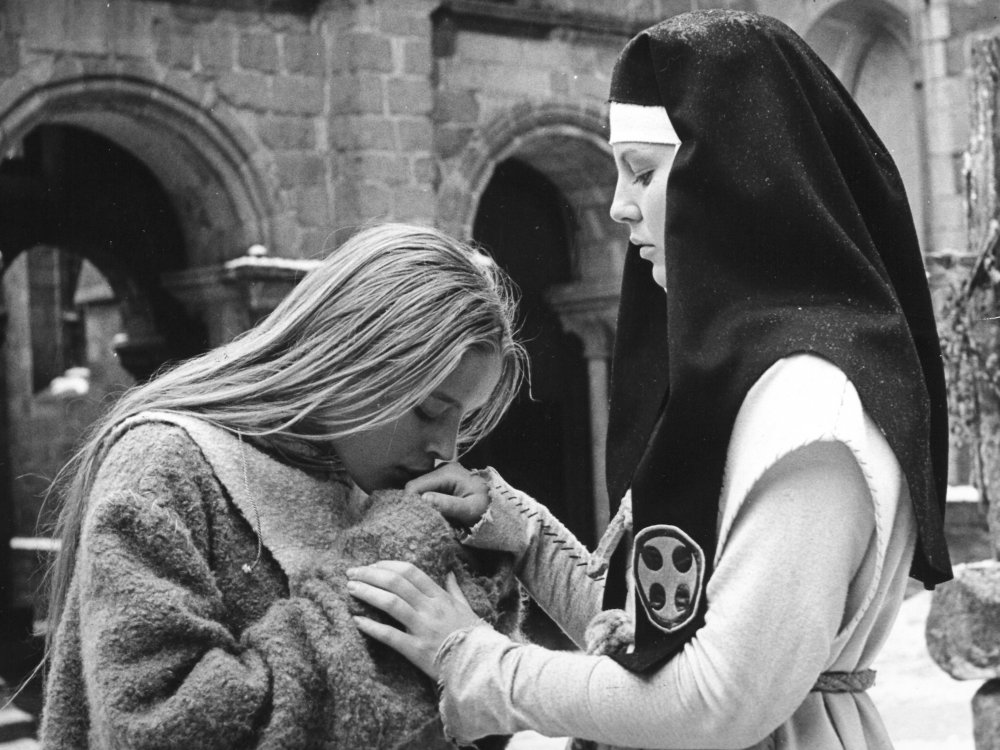 This is the masterpiece of Czechoslovakian filmmaker František Vláčil, also known for the following year’s spellbinding The Valley of the Bees, another medieval tale. Set during the turbulent, tyrannical removal of paganism by Christians during the Middle Ages, Marketa Lazarová follows the unfortunate fate of the title character (Magda Vásáryová) after she is separated from her caravan by a group of raiders, who hope to gain the support of a local leader against the wrath of the king.

Perhaps the most beautifully shot of all folk horror films, it’s filled with startling, wintry vistas, where packs of wolves roam and there’s a vivid sense of the violent decay of morality amid religious persecution. In 1998, Vlácil’s film was voted the best Czechoslovakian film ever made by its country’s critics, proof if it were needed of the calibre of this stunning and powerful film. 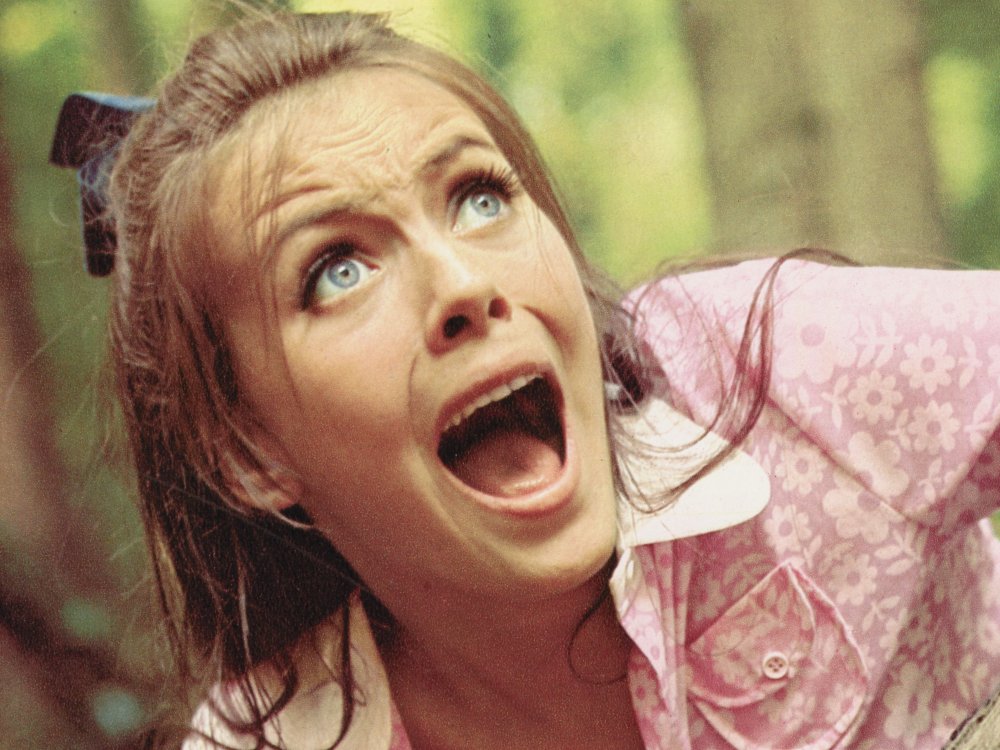 Sidney Hayers’ folk horror credentials are most associated with his classic witchcraft drama Night of the Eagle (1962), but there are also unsettling rural undercurrents – albeit of a more disturbingly sleazy variety – in this later crime thriller. Known as In the Devil’s Garden in the US, the film focuses on a country path where a girl is assaulted on her way home from school and, later, another is killed. The community is up in arms and the police are called in to try and solve the vicious goings on.

Hayers frames the film in an unusually esoteric way, implying throughout that the culprit is in fact supernaturally imbued. It’s posssessed with a sense of the gradually souring 70s and the decade’s tendency towards the grimy and the occult. Add to this, Assault’s unnerving electronic soundtrack, and its portrayal of pylons as almost sentient beings bearing witness to the violence, and we are left with one of the great hauntological horrors of the decade. 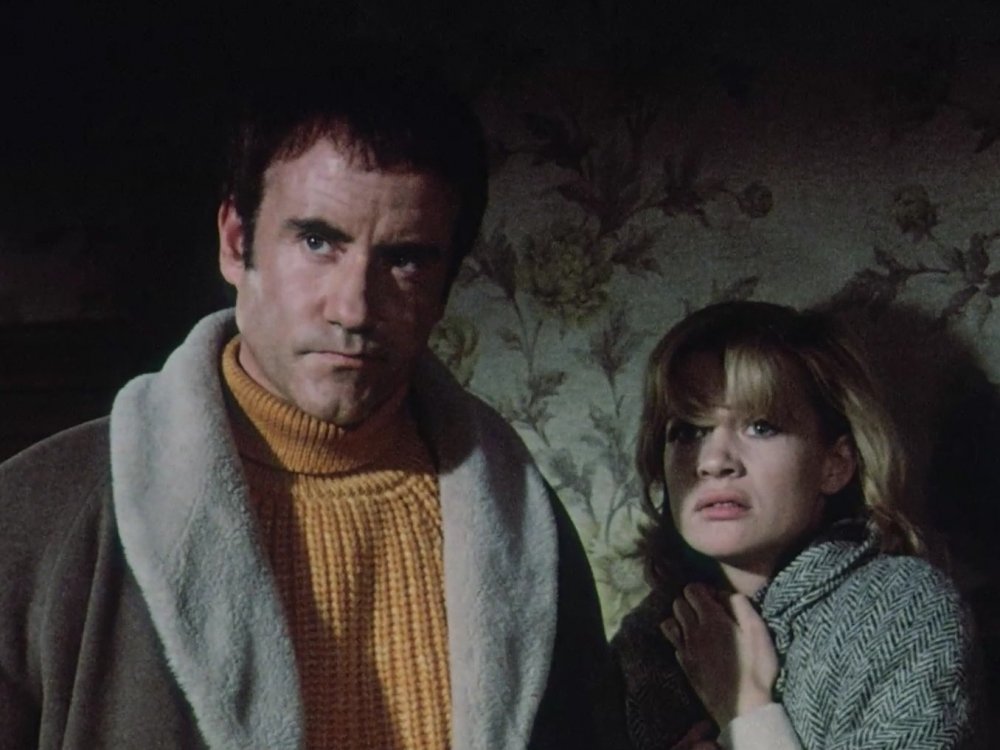 The BBC eco-sci-fi series Doomwatch (1970-72) was incredibly successful in its deeply unnerving ability to create effective moments of horror out of real ecological problems. For this big-screen version, one of Gerry Davis and Kit Pedler’s stories of pollution was adapted by screenwriter Clive Exton – fresh from writing 10 Rillington Place (1971) – and director Peter Sasdy, in the same year that the latter worked on Nigel Kneale’s folk horror favourite The Stone Tape.

In the film (another one that was given an evocative alternative title in the US: Island of the Ghouls), the investigations team known as Doomwatch are sent to a remote island to study the increasingly strange behaviour and physical characteristics of a fishing community, who are seemingly possessed or cursed. Although the mutations are caused by pollution from a chemical dump, Doomwatch is given a distinctly folk horror slant by the superstitions of this anti-modern Cornish community. 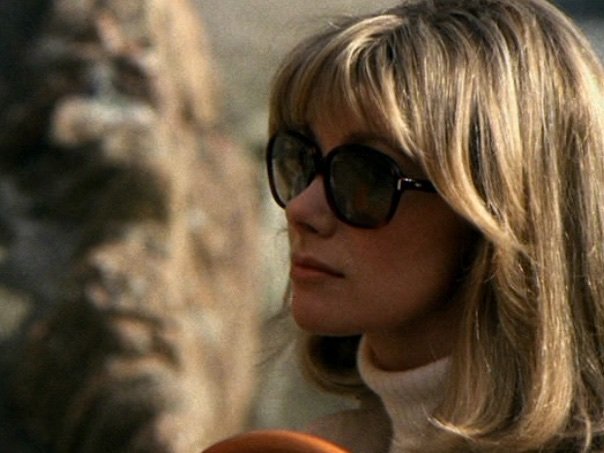 Fred Burnley was known in the industry as an editor and crew member on various British films and TV series before he eventually moved into directing with several episodes of the BBC series Omnibus. With this background, his sole feature film, Neither the Sea Nor the Sand, stands out even more for its unique strangeness. Sometimes known under the title The Exorcism of Hugh, the film is a deeply eerie tale of the quietly fantastical, based on former ITN newsreader Gordon Honeycombe’s debut novel.

It’s an incredibly mature, abstract tale of grief, following Anna (played brilliantly by Susan Hampshire) as she mourns her dead lighthouse-keeper lover back to the purgatory of a half-life on the brutal, frosty coast of Jersey. Less a ghost story than a kind of weird fiction, Burnley’s film is one of the more unusual oddities in 1970s folk horror cinema. 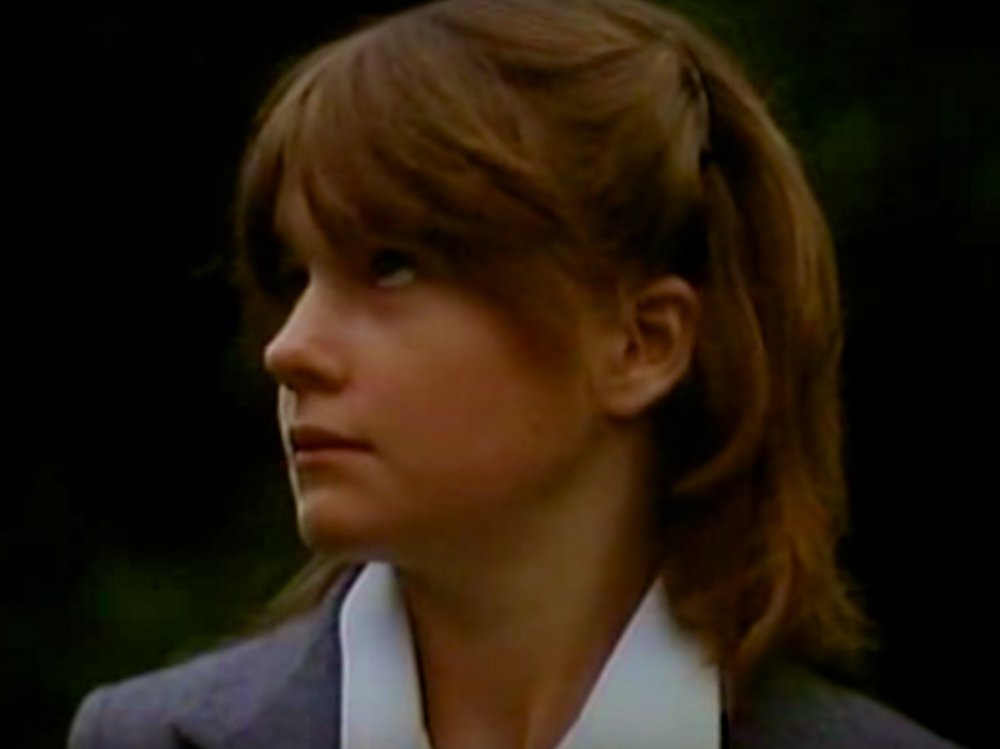 Considering the brilliance of Edward Woodward playing the puritan copper in The Wicker Man (1973), it’s surprising that the actor largely avoided horror cinema for almost a decade afterwards. But that ended in 1981 with Lindsey C. Vickers’ highly underrated The Appointment. Vickers had worked as assistant director on a number of Hammer’s 1970s releases, though The Appointment remains his only sole directing credit.

After upsetting his daughter by missing her violin recital, Ian (Woodward) begins to have bizarre premonitions about a car crash caused by the presence of mysterious, supernatural dogs. Reminiscent of Richard Donner’s The Omen (1976), but with a greater sense of isolated, even evil, landscapes, the foreboding of the film is palpable and effective, as the daughter’s command of potentially demonic creatures that obey her beck and call becomes apparent. 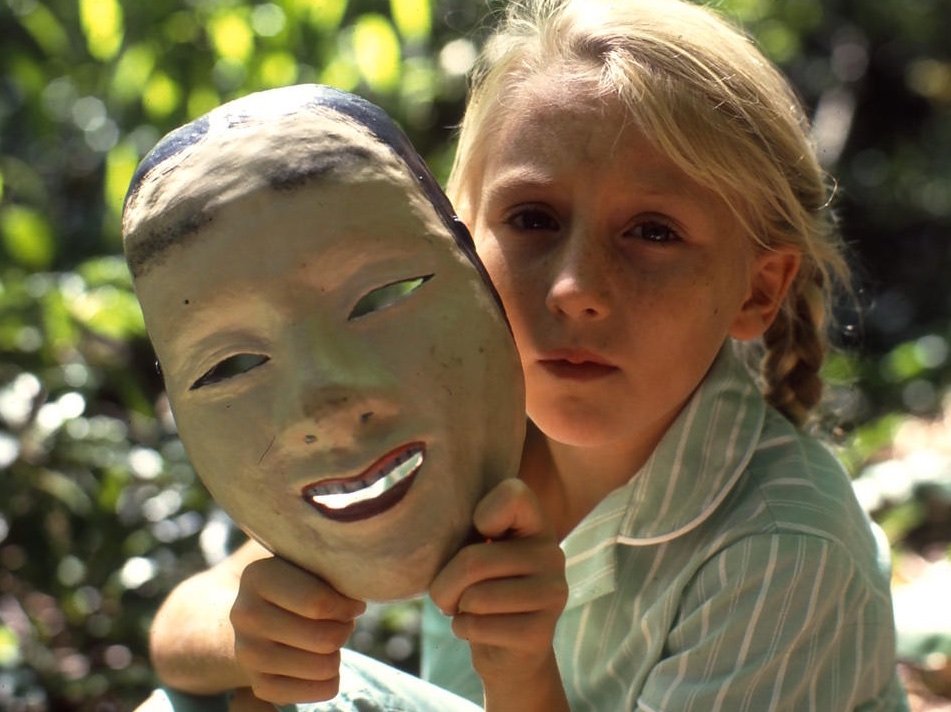 Ann Turner’s Celia is an unusual film for Australian cinema of its period, standing out for its mixture of naive imagination and fairytale. Set in 1950s rural Melbourne, we follow Celia (Rebecca Smart), a troubled schoolgirl who builds stark, folkloric worlds and visions as a way of coping with the difficulties of growing up.

Maintaining a sense of growing tension about what Celia’s fantasies are building towards, Turner’s real feat is in her film’s unusual mixture of themes and ideas. The world of adults that Celia wants to escape from is filled with political tensions, in a juxtaposition of fantasy and adult themes that looks forward to Guillermo del Toro’s Pan’s Labyrinth (2006). Here, the backdrop is a mid-century Melbourne permeated in the Red Scare and where the farmlands are overrun with a plague of rabbits. 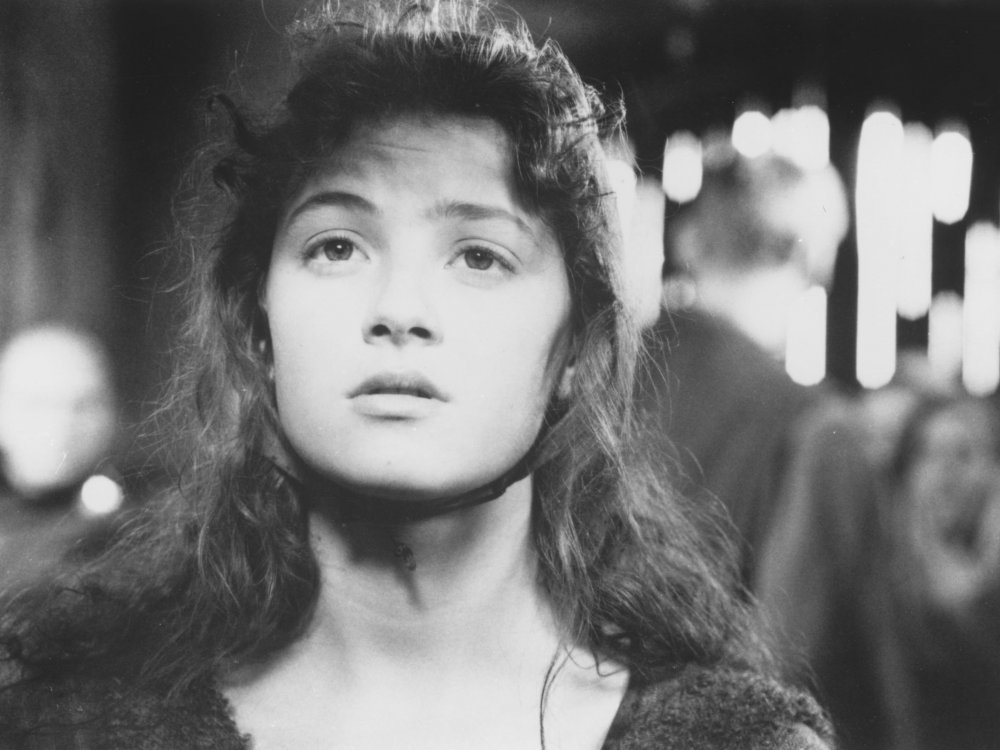 An unusual proposition among British films of the early 1990s, Chris Newby’s Anchoress feels out of time in its stark landscapes and ancient theology. Beautifully shot in black and white, it’s a historical drama set in a Surrey village in the 14th century and following the fate of a young woman (Natalie Morse) who is walled up as an ‘anchorite’ with a statue of the Virgin Mary in order to bring blessings to the locals.

Things take a fantastical turn, but Newby’s film is enjoyably ambiguous about whether they are really happening or if they’re merely the woman’s delusions. The awe and fear of the mystical are wonderfully translated though a range of supporting parts, played by such stalwart character actors as Pete Postlethwaite, Christopher Eccleston, Ann Way and Annette Badland. 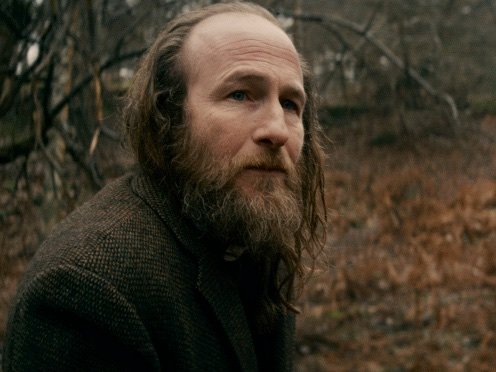 Director Adam Wimpenny cut his teeth working in television, in particular on several Derren Brown specials, so it’s unsurprising to find his feature debut an eerie and tricksy work. Blackwood follows a troubled author (Ed Stoppard) who relocates to the countryside with his family (Sophia Myles and Isaac Andrews). They take refuge in an isolated house after the writer’s severe breakdown, only for reality itself to begin to unravel.

With ghosts, country murders, owl masks and time-warps, Blackwood is a sort of rural feature equivalent of a Sapphire & Steel (1979-82) episode, boasting some fine cinematography and performances. Even if its ending is a little too neat, the film’s imagery and atmosphere certainly deserve greater appreciation in an age when new folk horror films often fit a little too easily into established forms and tropes.