Prepare to be offended… 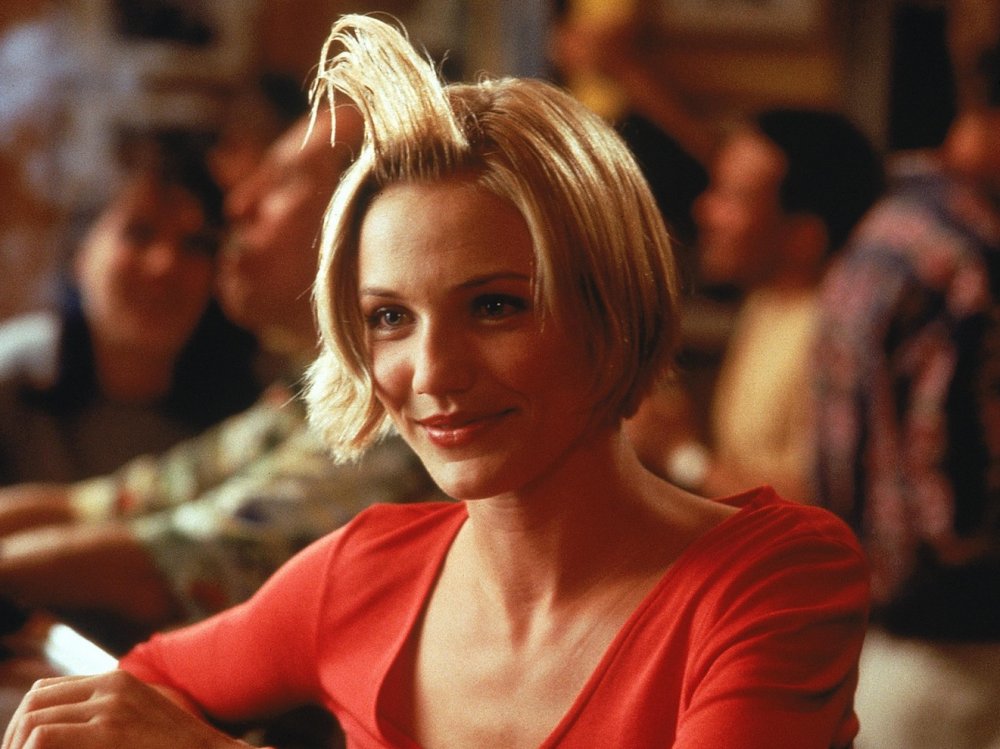 First, a word of advice about gross-out comedies. They’re not to be watched while eating even the most basic of snacks. Popcorn? No. Cappuccino? Out of the question.

They’re not to be watched – by any means – with your parents. With their gags involving urine, vomit, semen and all manner of bodily fluids, these in-your-face foul movies are the kind that you watch, then have to immediately shower after.

The roots of the subgenre – one marked not only by insanely gross scenes but by comedies that deal with taboo subjects such as sex and bodily functions – date back to the late 60s, after the MPAA film rating system replaced the industry’s strict Hays Code (which laid out moral guidelines of what was and wasn’t acceptable to show on screen).

Back then, some directors were beginning to dabble with subversive comedies that raised a middle finger to the status quo. Nothing was too OTT, nothing too far. The most notable among them? John Waters, aka the Pope of Trash, whose unashamedly lowbrow and tawdry comedies (including Pink Flamingos and Female Trouble) happily dwelled on humans being gross.

Towards the late 70s, the same shock humour employed by arthouse provocateurs bled into mainstream comedy, with popular movies like The Kentucky Fried Movie and National Lampoon’s Animal House leading to the term ‘gross-out’ being used by critics.

What tethers these movies to their older cousins is, put simply, your reaction, your facial contortions. You worm in your seat, wishing you could unsee the thing you just saw. You want to wash your eyes out with a bar of soap. Ah, to be grossed out! 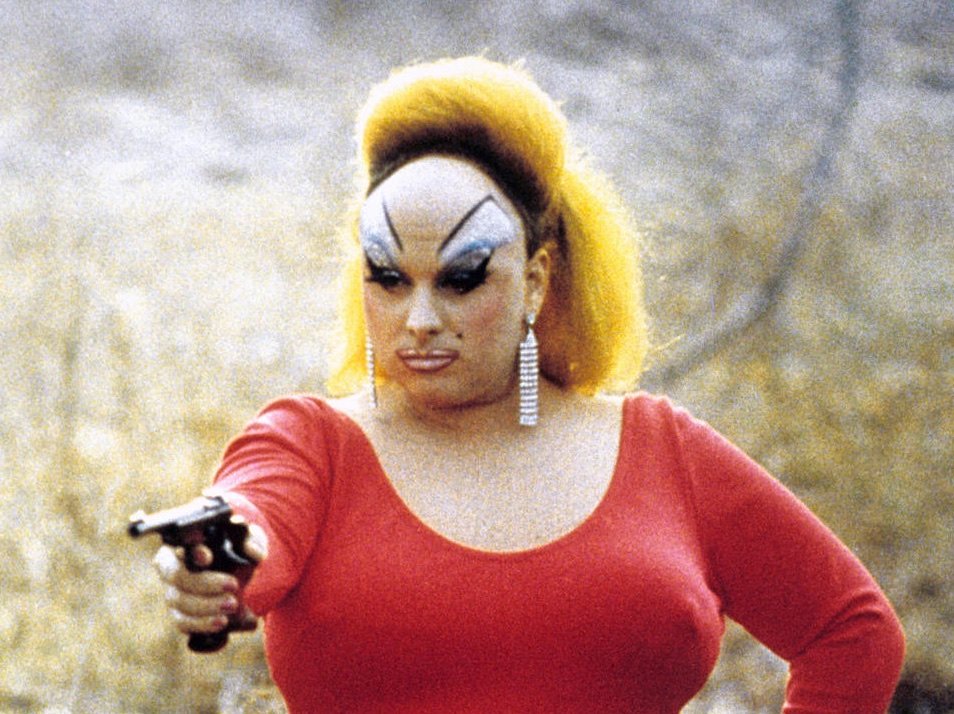 Outrageous and trashy, Pink Flamingos stars John Waters’ muse, Divine, as trailer-dwelling criminal Babs Johnson, “the filthiest person alive”. To prove it, Babs is willing to eat a fresh heap of dog turd. Literally. Cue the grossest 30 seconds of footage ever committed to celluloid, as Divine, in an uninterrupted shot, proceeds to scoop up and chow down on poo.

With the tagline “an exercise in poor taste”, the cult midnight movie wears its subversiveness on its sleeve, showing things that even the most daring of Hollywood producers wouldn’t consider. Pink Flamingos is a grenade tossed in the direction of mainstream movies. It’s okay for audiences to be revolted, the movie says, it’s okay to be tasteless. That’s the point. Trash can be art, too.

Before the term ‘gross-out’ existed, and before the genre became a safe Hollywood staple, Waters topped everything to come with this pure, distilled bin juice. 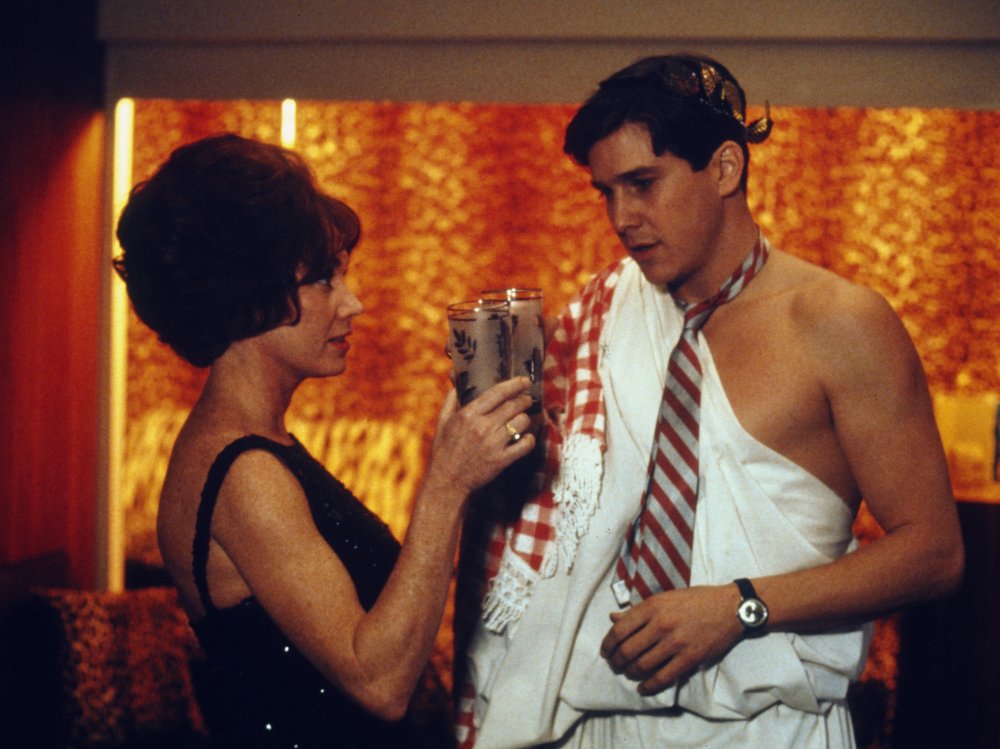 “It assaults us,” Roger Ebert said of Animal House, a movie penned by Harold Ramis and based on his own experience in the Zeta Beta Tau fraternity at Washington University. The grossest scene in the film – which follows the exploits of the Delta Tau Chi frat and their battles with the dean who’s determined to expel them – sees John Belushi’s Bluto in the lunch canteen. He’s stuffing his face with jelly and burgers, enjoying the disgusted look on the face of the preppy kids. “See if you can guess what I am,” he says, cramming mashed potatoes in his mouth. Then, with both fists, he punches his puffy cheeks and food goes flying onto everyone. “I’m a zit!”

Along with 1977’s The Kentucky Fried Movie (also directed by Landis), Animal House catapulted the gross-out comedy to Hollywood acceptance. Yet with its scenes of projectile vomiting – in a mainstream movie – it was a mere taster of things to come. 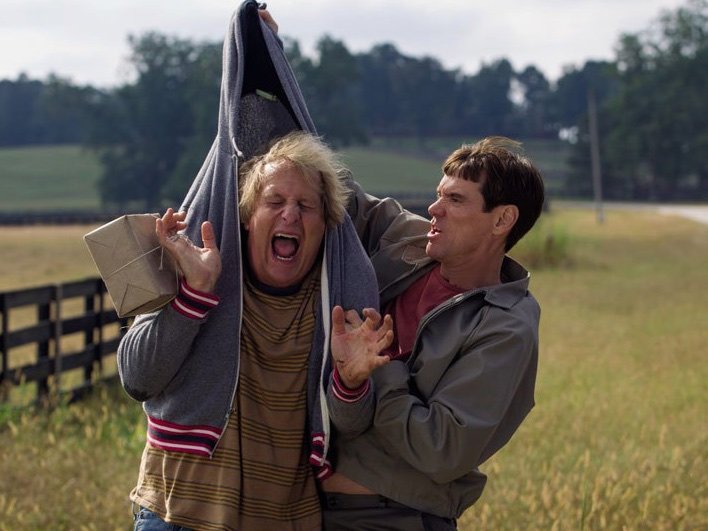 The Farrelly brothers take toilet humour to revolting new levels in Dumb and Dumber, a movie following two friends who are worryingly stupid. Lloyd and Harry embark on a road trip in order to return a briefcase of cash to a wealthy woman. In one of many mishaps along the way, Harry (Jeff Daniels) finds himself at the woman’s house, in desperate need of a crap after Lloyd laced his coffee with laxative. He finds a toilet and does his business – loudly – only to be interrupted by the woman at the door. “I hope you’re not using the toilet,” she says, “it’s broken”. The camera zooms in on his horrified face. He fiddles around frantically. Then he decides to lift the toilet and pour everything out the window.

The genius of the scene is the sound design: those exaggerated stomach noises, those splatter sounds, masterfully conducted by the Farrelly brothers. Reliving this scene now is enough to make you retch. 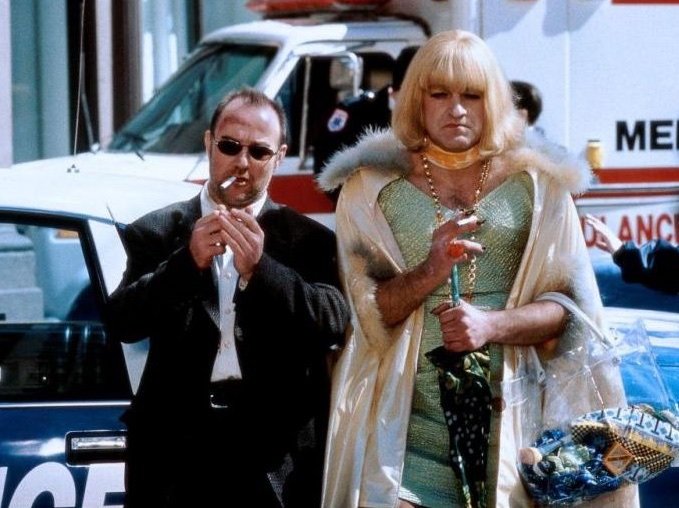 The title is a not-so-subtle hint at what you can expect from this gross-fest. Set in the seedy side streets of NYC, the preposterous premise of Killer Condom involves a condom with fangs that lurks in Hotel Quickie. There’s been a series of freaky killings there involving men’s penises being bitten off. A gay detective begins to investigate, only to witness these killer condoms firsthand.

It’s equal parts terrifying and hilarious. Director Martin Walz combines elements of body horror and deadpan humour into what we can only imagine a David Cronenberg gross-out comedy might look like. With its air of a low-rent horror movie, Killer Condom is the first time – and probably last – that you’ll ever see someone shoot a gun at a condom. “The rubber that rubs YOU out!” goes the tagline (though “safe sex has never been so dangerous” could also work). It’s guaranteed to gross you out, as much as it’s guaranteed to have your legs tightly crossed. 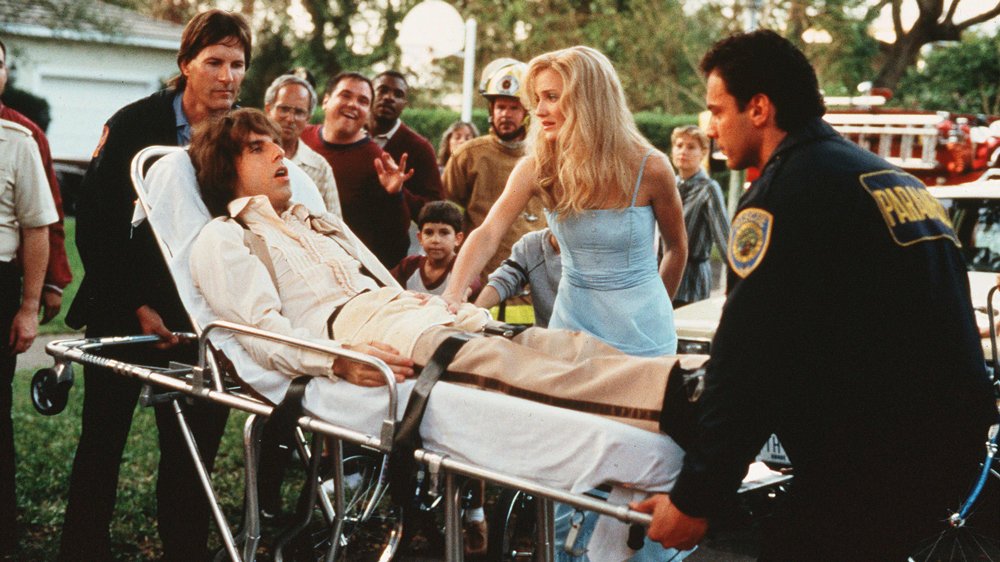 The Farrelly brothers were back at it again with There’s Something about Mary, a comedy whose reputation in the gross-out genre rests squarely on two unforgettable scenes. The first is when high-school teen Ted Stroehmann (Ben Stiller) lands a prom date with dream girl Mary Jensen (Cameron Diaz). Right before the date he goes for a pee, briskly zips up his fly, then we see his eyes widen in a pained expression. We know what happened, even though we didn’t see it, but then the filmmakers actually show it in close-up: Ted’s scrotum stuck in his zipper. “We’ve got a bleeder!”

The second scene involves another date with Mary 13 years later. Right before this date, he masturbates in his bathroom and, well, “Where the hell did it go?” he says, desperately searching as Mary knocks at the door. The Farrelly brothers again show us the semen dangling from Ben Stiller’s ear (“Is that hair gel?”). They revel in it, just as they revel in Diaz’s mad, sperm-combed quiff. For gross-out genre junkies, these scenes are the film. Like the best of the subgenre, this is not one to watch with your folks. Or while you eat, for that matter. 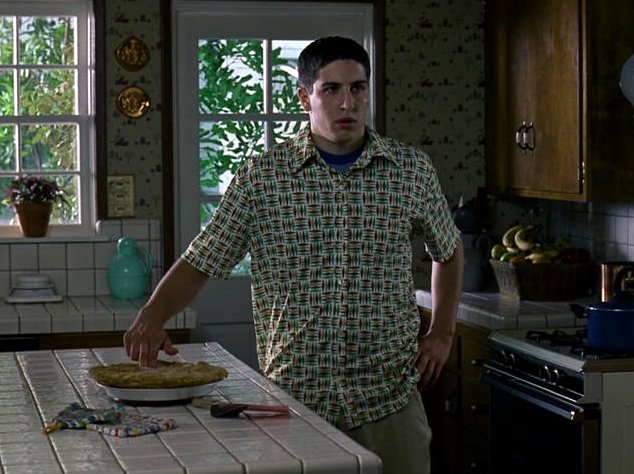 On the surface, American Pie is about four teenage boys who make a pact to lose their virginity by prom. When you think about it, though, the whole franchise, including the title, rests on one particular scene. You know the one. Yes, where Jim humps a freshly baked apple pie on his parents’ kitchen table. It’s gross and awkward (especially when his dad enters). Yet it’s not the grossest scene in the movie. That’s surely when Stifler accidentally drinks semen in a beer cup.

American Pie is a teen sex comedy with ‘gross-out’ scenes aplenty, typically featuring one kind of bodily fluid or another. Did I mention Finch’s toilet mishap, an obvious hat-tip to the aforementioned Dumb and Dumber scene? A mochaccino laced with laxative? Maybe let’s not go there. 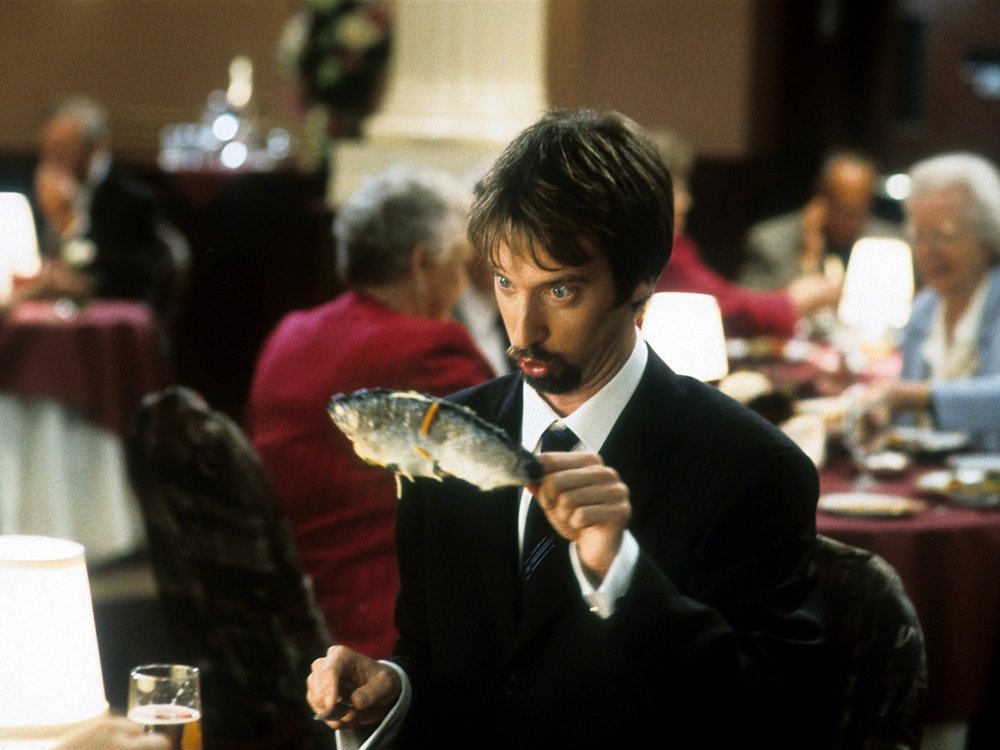 It’s a surrealist black comedy that viewers of Green’s The Tom Green Show will be familiar with. For others… well, it’s a tad OTT, with a scene featuring Green delivering a baby and cutting the umbilical cord with his teeth. Variety called it: “One of the most brutally awful comedies ever to emerge from a major studio.” Empire featured it on their list of The 50 Worst Movies Ever, and even Roger Ebert included it on his “most hated list”. No wonder this happily offensive movie has a cult following. 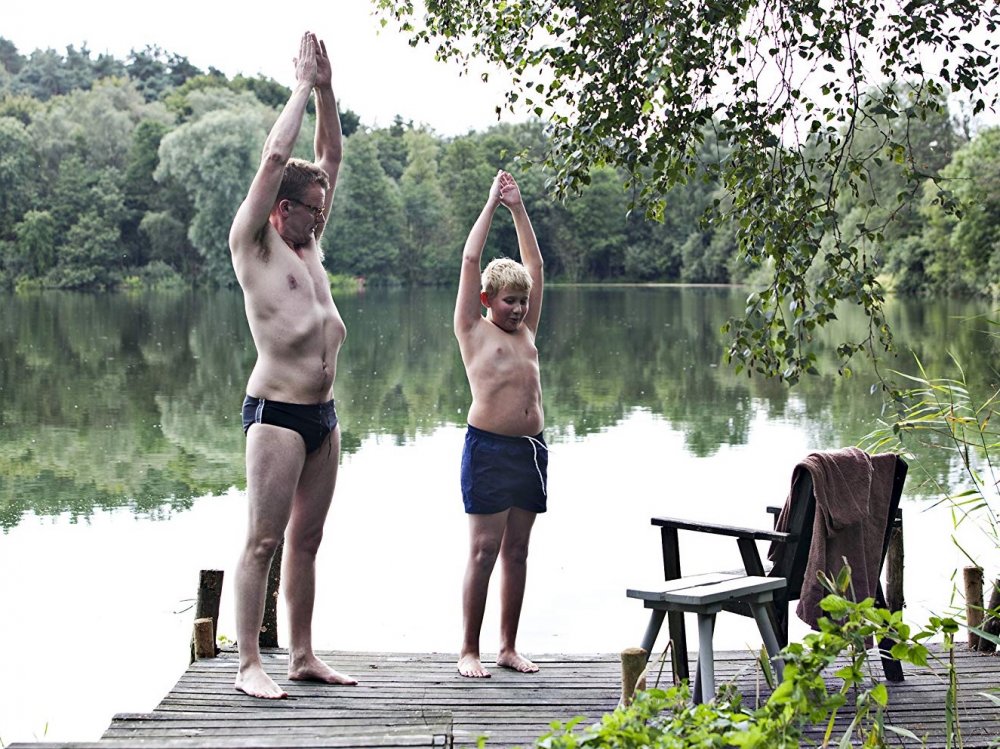 Laden with disconcerting lols, Mikkel Nørgaard’s excruciatingly uncomfortable comedy follows the debauched misadventures of two friends on a canoe trip. One kidnaps the 12-year-old nephew of his pregnant girlfriend to prove he is father material. The other is sex-crazed and definitely not okay with the boy joining their weekend trip, during which the two irresponsible men end up in a brothel, a hospital and a prison.

The acting is deadpan, the action filmed as if it were a Danish version of Curb Your Enthusiasm, all shaky camerawork and straight faces. As for the gross factor: one epically awkward scene involves a man, his mother-in-law’s eye and a certain bodily fluid. Need I say more? 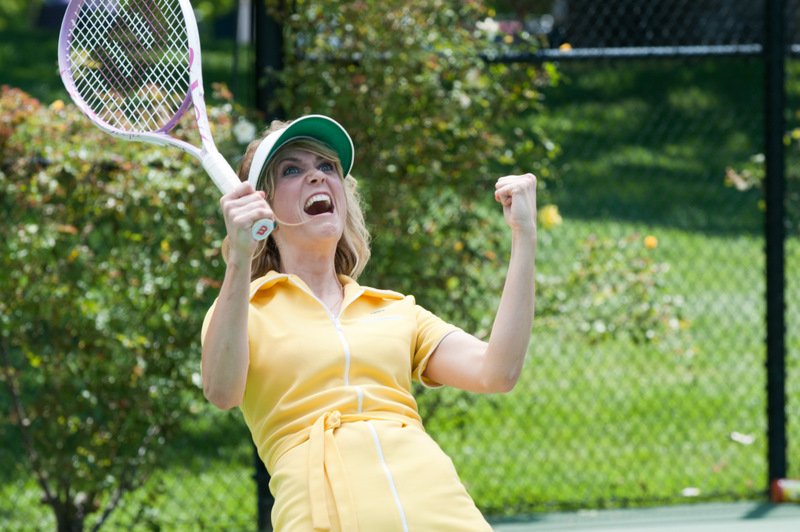 Back to poo gags. And if there’s one thing that stays with you about Bridesmaids, it’s not the schmaltzy scenes between Chris O’Dowd and Kristen Wiig. It’s the poo gags. The squitters, to be more accurate. It happens – said squitters – during a wedding dress fitting, after the bride and bridesmaids-to-be wolf down an epic spread of dodgy Mexican food. In a spotless bridal store, the girls are heating up; droplets of sweat are forming on their faces, hair sticking to their foreheads. Burps and farts are followed by a mad dash to the bathroom. But not everyone fits, and suddenly the sink is being put to use. Worst of all, the bride doesn’t make it across the street to a nearby loo.

It’s not exactly Pink Flamingos gross, but you can’t help but watch it through your fingers, wondering what you’d do in that situation, wondering how you’d deal with such cosmic levels of embarrassment. Who knew food poisoning could be so hilarious? 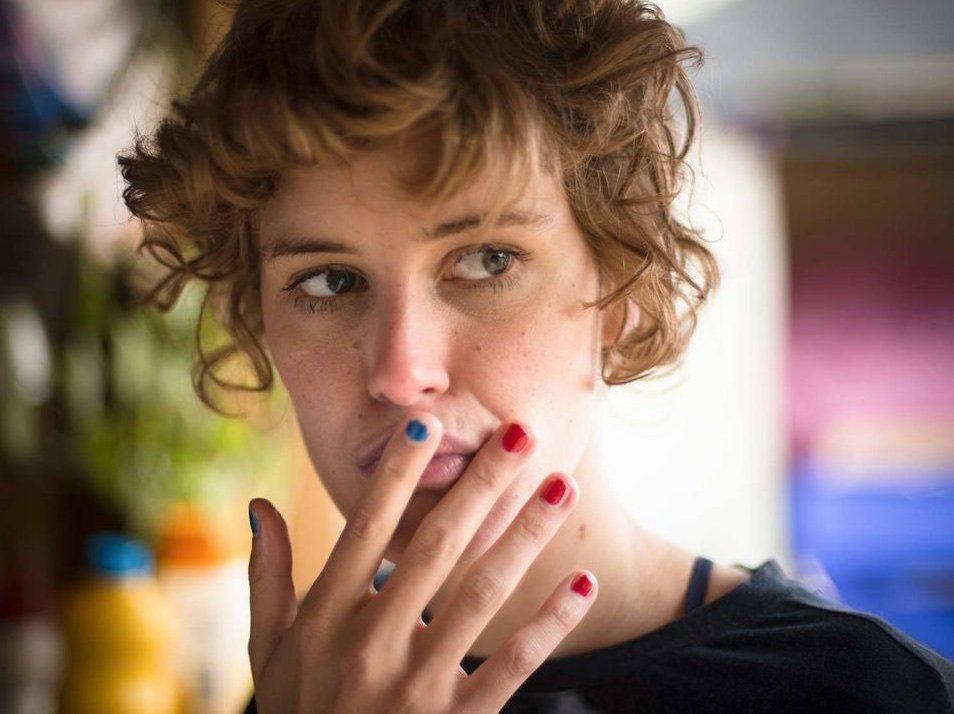 This deeply WTF-laden comedy from Germany is about girlhood, feminism, sexuality and… hygiene. Helen is an 18-year-old who masturbates with vegetables. Her mother is depressive, mentally unhinged and hygiene-obsessed. For Helen, hygiene is overrated. She picks at her bum and does things no sane, germ-aware person would do, like sitting on a public toilet seat sprayed with pee.

She, along with filmmaker David Wnendt, embraces the grossness, even in her sex life (“Can you shit on my belly?”). Wetlands is a coming-of-ager wrapped in a gross-out comedy, with plenty of moments that, once seen, can never be unseen. You’ve been warned.