From Angelopoulos to the new weird wave, here are some of the finest cinematic exports from Greece. 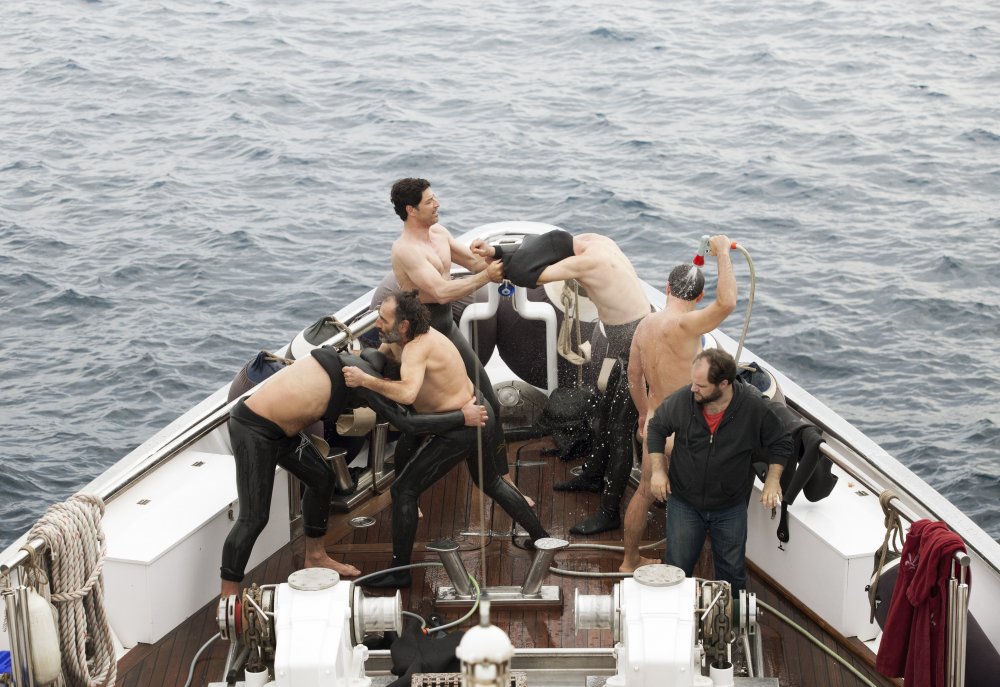 Greek national cinema, as a business and as an art, has been characterised by opposition and struggle for the past half-century. While other national cinemas bloomed – often in spite of dictatorial regimes and wartime chaos – the film industry in Greece faltered. Unsupported by state funds and strictly controlled for propaganda purposes, the political landscape offered plenty of interruptions for even the most determined filmmakers.

A year after Nazi occupation ended, the nation nose-dived into a brutal civil war, pitting royalist forces against communist revolutionaries. The 50s and early 60s saw an artistic respite – accounting for the ‘New Greek cinema’. Borrowing from Italian neorealism and expressing, however obliquely, the struggles of the recent past, filmmakers like Michael Cacoyannis (Zorba the Greek), Nikos Koundouros and Alexis Damianos ushered in a new stylistic renaissance. But this momentum was quelled in 1967, when a coup led to a military junta lasting for nearly a decade. The regime was known for its repression and harsh censorship, and the studio system in Greece essentially collapsed.

Domestic filmmakers have often found international recognition elusive; historically, few Greek language films have reached English-speaking audiences. This has changed increasingly in recent years, as a handful of avant-garde, low-budget filmmakers have broken out on the European festival circuit. In 2009, Yorgos Lanthimos won the Prix Un Certain Regard in Cannes for his strange, stirring Dogtooth.

Although the economic crisis of 2008 continues to highlight longstanding political divides, it has also welcomed the uncontainable anarchy of a new kind of cinema – loosely classifiable as the ‘weird wave’. Weird wave filmmakers have contradicted the prevailing Greek cinematic tradition; a tendency to look inward, focusing on Greek history and identity in the face of a strictly-censored past.

Members include Athina Rachel Tsangari, whose recent film Chevalier – named best film at the 2015 BFI London Film Festival – is now on BFI Player. With that in mind, it’s fascinating to wait to see what Greek cinema does next – poised as it is between reckoning with its own history and boldly blazing an oddball path into the future. 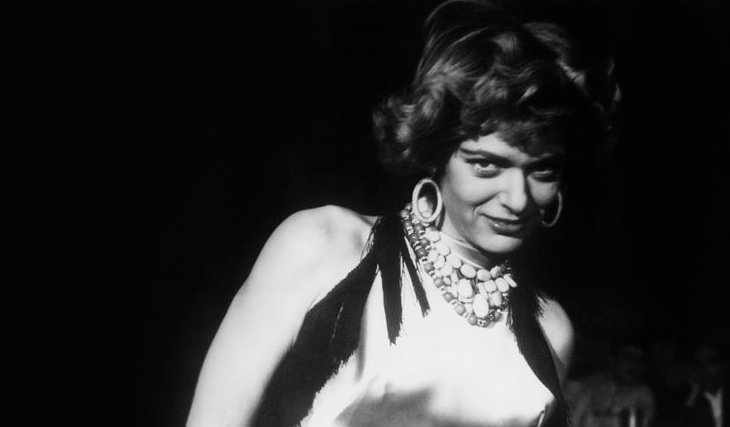 Director Michael Cacoyannis (Zorba the Greek, 1964) is perhaps the most well-known Greek filmmaker in the English-speaking world; he studied theatre in Britain before returning to Greece in 1953 to make his feature film debut, Windfall in Athens (1954). Stella followed – a story as influenced by Italian neorealism as it was classical Greek tragedy.

Stella (Melina Mercouri) is a free spirit being bludgeoned into a marriage with a football player whom she loves, but does not want to commit to. Mercouri sparkles as the alluring and strong-willed Stella, unbending to outside interference. Her determination and joie de vivre could easily stand in for the will of the imperilled nation, but if that is the case, the fate that awaits her does not prove optimistic. 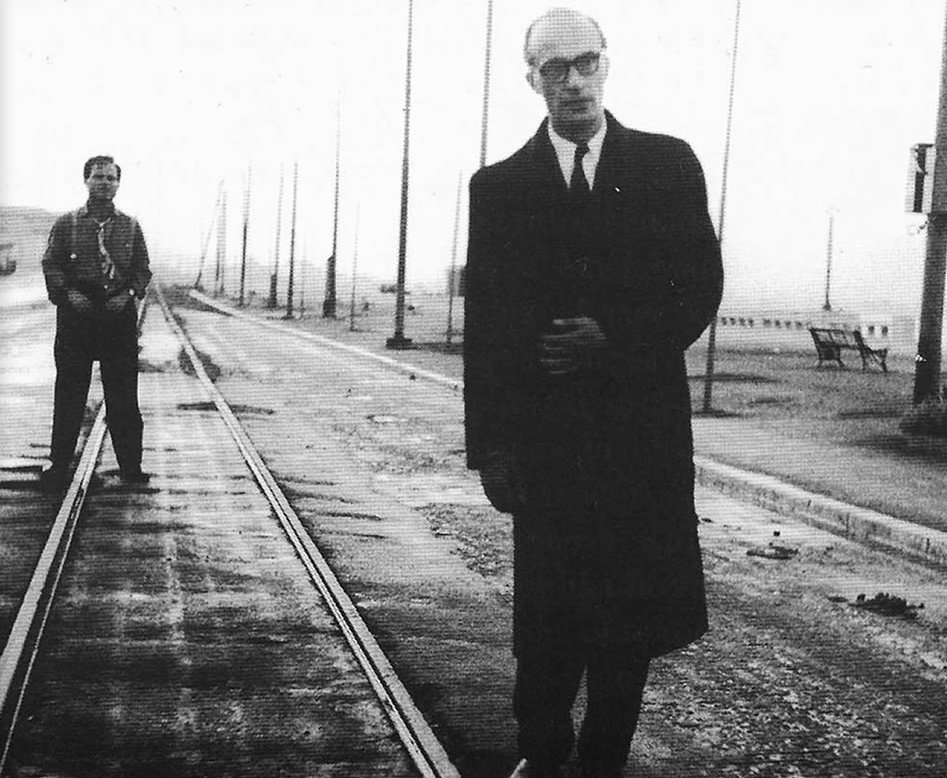 Nikos Koundouros’ film is all Dutch tilts à la Carol Reed and compositions with a Weegee-style urban flair. In other words, this is essentially a Greek film noir. The English title is ‘The Fiend of Athens’, referring to a notorious gangster. Thomas, the unfortunate protagonist (Dinos Iliopoulos), is the gangster’s doppelgänger – inspiring a city-wide case of mistaken identity. But the mild-mannered everyman soon realises being mistaken for a criminal kingpin has its benefits. Morally murky and memorably tragic, O Drakos has been consistently voted the number one Greek film of all time by the Hellenic Film Critics’ Association. 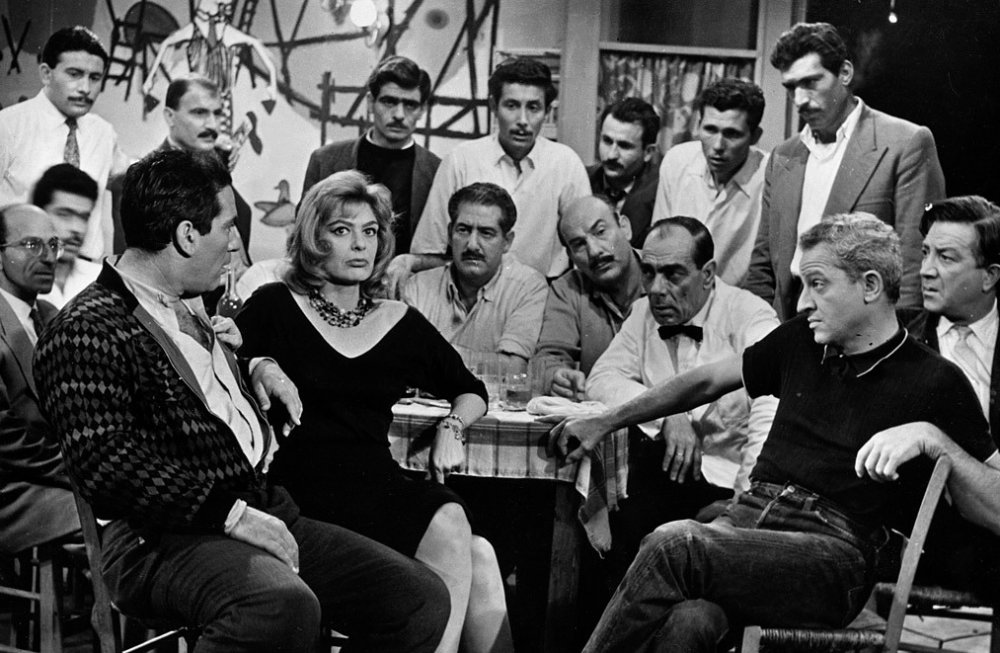 Best-known for urban noir classics such as Night and the City (1950) and Rififi (1955), Jules Dassin – an exiled American and husband to one of the most famous Greek movie stars of all time – made this vehicle for wife Melina Mercouri. She stars opposite him as a strong-willed prostitute who he tries to bring under his thumb; but Mercouri remains stubbornly individual in the face of his haughty American attempts to ‘improve’ her. It’s a clumsy if well-meaning parable about American disregard for other cultures, but Mercouri’s performance really shines through, embodying the fighting spirit of a generation of tough Greeks. Ironically, the film had enormous success stateside. 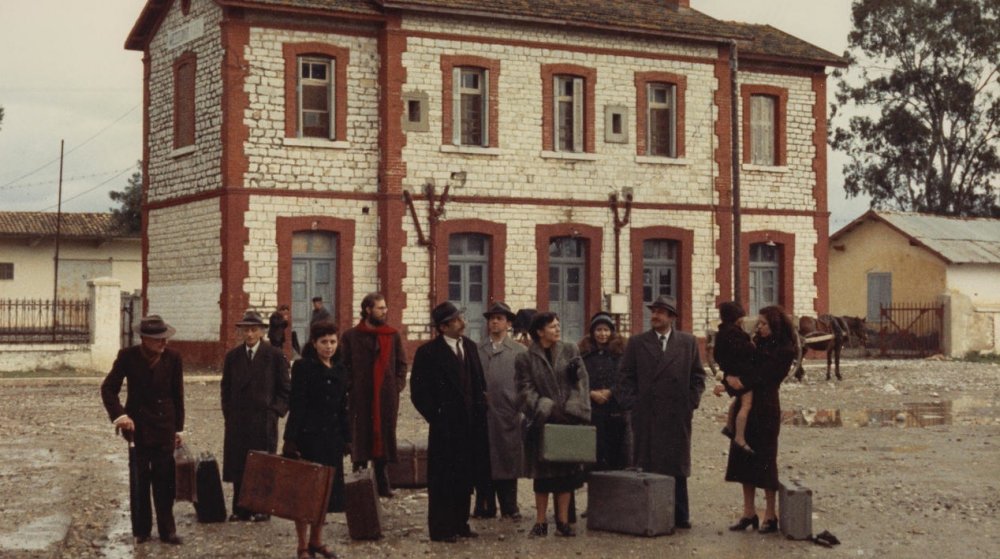 This wandering tale of a travelling troupe of actors, covering a vast span of Greek history in retrospect, shot Theo Angelopoulos to international acclaim. Beginning in 1939 and tracing the turbulence of German occupation and the revolutionary stirrings of the civil war, Angelopoulos adopts a loose, gradual pace, stretching his nearly four-hour running time into a tapestry of muddy, war-torn mid-century Greece. During their travels, the actors encounter pro and anti-royalist rallies, hanged partisans, and forces of occupying armies, and no one escapes unscathed. They are given no other names but their mythical onstage ones – Agamemnon, Elektra, et al – and only these in the credits, implying a certain metaphorical dimension to each of their destinies.

Angelopoulos’s film is a masterpiece of form, too; comprised of only 80 graceful, long still shots. He captures riotous Athenian streets and the rocky Mediterranean landscape as integral pieces of the political and human drama that unfold against it. 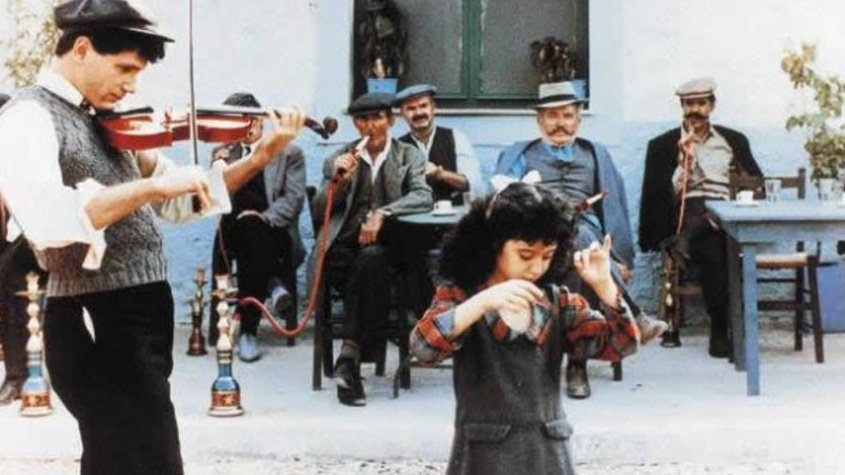 Named for a type of traditional Greek folk music and the accompanying dance, Costa Ferris’s film is a loosely fictionalised account of the life of popular singer Marika Ninou (Sotiria Leonardou) and her rise to fame. Born in 1919, the protagonist faces an ever-collapsing Greek social order; the early 20th-century history of the country was rife with disaster and war. So the heart-wrenching musical drama unfolds as Ferris – a respected songwriter – uses the rembetiko as a source of pride amid the chaos. The music serves as a vessel for cultural memory and political commentary. Director Ferris said of it: “No other modern creation wakes, so directly and so automatically, the Greek soul; the rebel that every Greek has inside.” 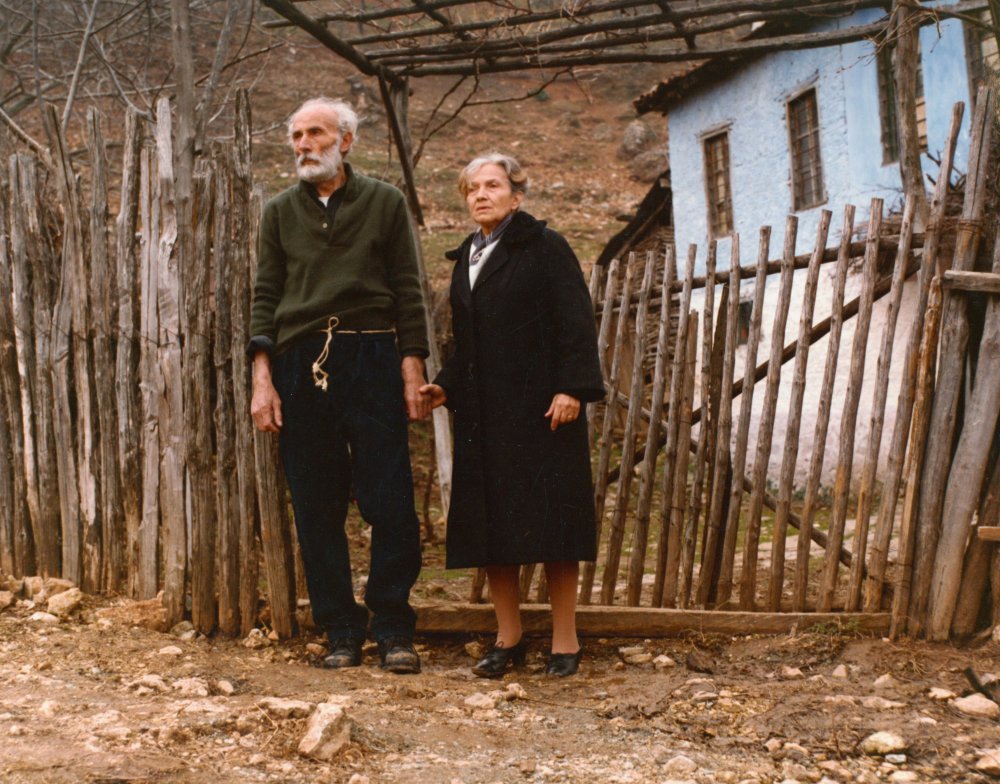 The first of Angelopoulos’s loose ‘Trilogy of Silence’ (completed by The Beekeeper and Landscape in the Mist), Voyage to Cythera tells of the homecoming of a elderly man (Manos Katrakis) who was exiled after the Greek civil war – as so many were – for his left-wing politics. After spending some 35 years in the Soviet Union, he returns to find an aged wife and grown children waiting for him, but struggles to find any depth of feeling for them. His son, a filmmaker, is equally at a loss, looking on as his father refuses to sell his ancestral land.

Still, this never plays as straightforward drama. Angelopoulos’s characteristic ambiguity and crawling pace offer more questions than answers. What’s happened to the old revolutionary in the intervening years? How alien must his home country seem to his weary eyes? Voyage to Cythera is an enigmatic, sometimes frustrating film, but in many ways this is befitting of the journey itself. The past is an impossible destination, just as the storied island of Cythera turns out to be. 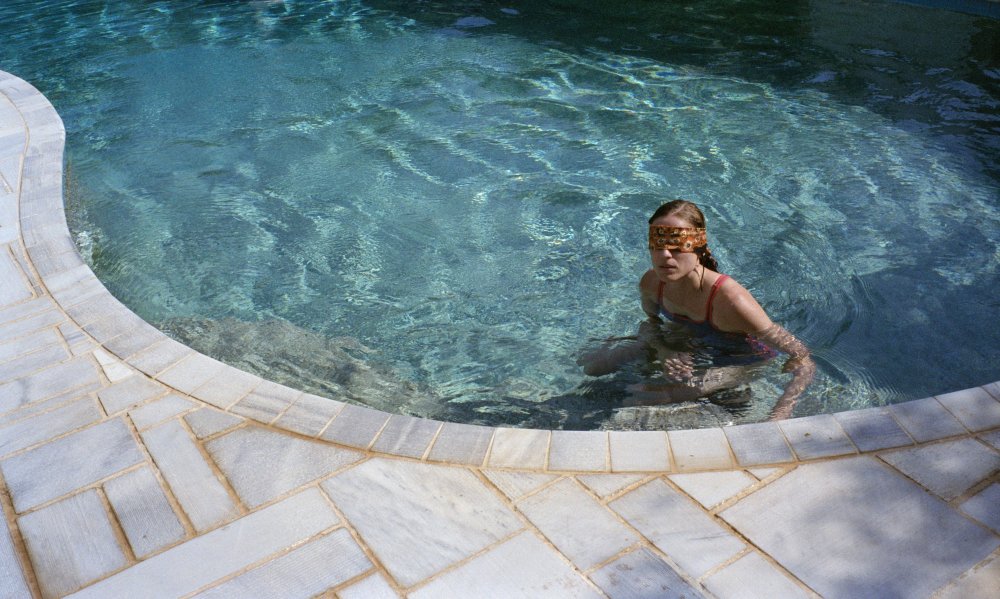 Stirring, violent, and more than a little bit bizarre, Dogtooth is perhaps the foremost example of the new wave of Greek cinema – ominous, provocative, and surreal. Trapped in a cult-like, walled-in family environment, two sisters and their brother are kept captive and isolated from the outside world – with horrendous consequences. The vacuum-packed interiors of their family home even protect them from the sight of a stray cat – a terrifying monster to the siblings, who kill it immediately. From queasy incestuous moments to the culminating escape from the compound, Yorgos Lanthimos laces his debut with the slightest hint of mordant humour. Much like that of Lars von Trier, his work inspires the sort of laughter that comes with a flinch. 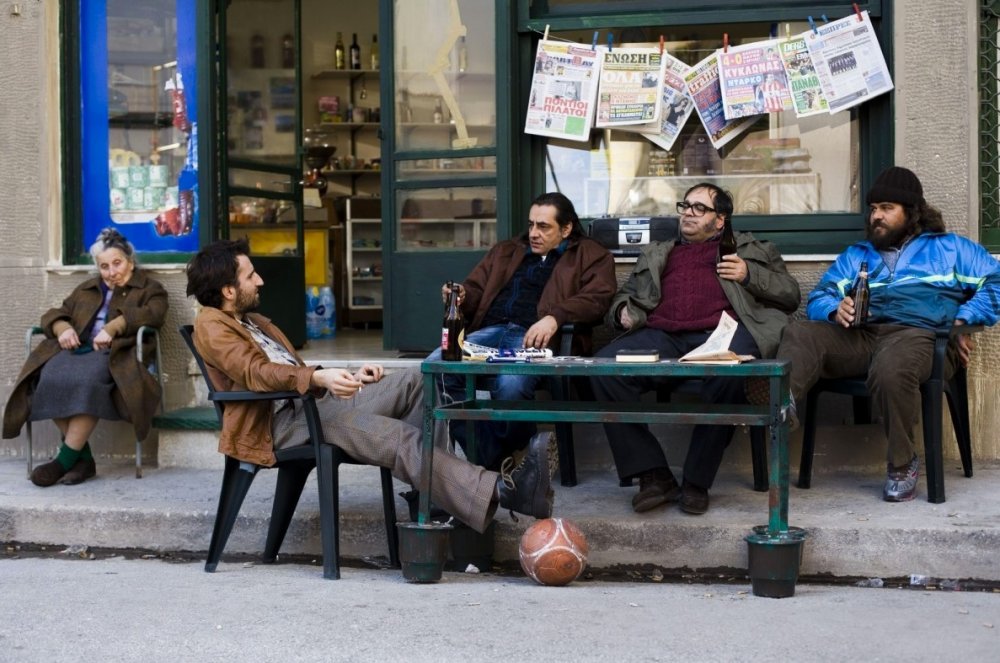 A lesser-known entry into recent Greek cinema, Plato’s Academy looks at the conflicts of nationalism and multiculturalism – ever more relevant given the rise of far-right political parties and the current migrant crisis in Greece.

It takes place in a small Greek town, where a bunch of big-mouthed yokels sit outside a taverna all day. A kind of picaresque comedy populated by weirdos, layabouts, and bigots, the film avoids condemnation of its characters. They bicker, discuss current events, complain about the hard-working Albanian immigrants in their town, and then – with brilliant comic irony – discover one of their own has Albanian blood. With all their homogenous Greek identity torn asunder, the hapless men have to start thinking a bit differently. 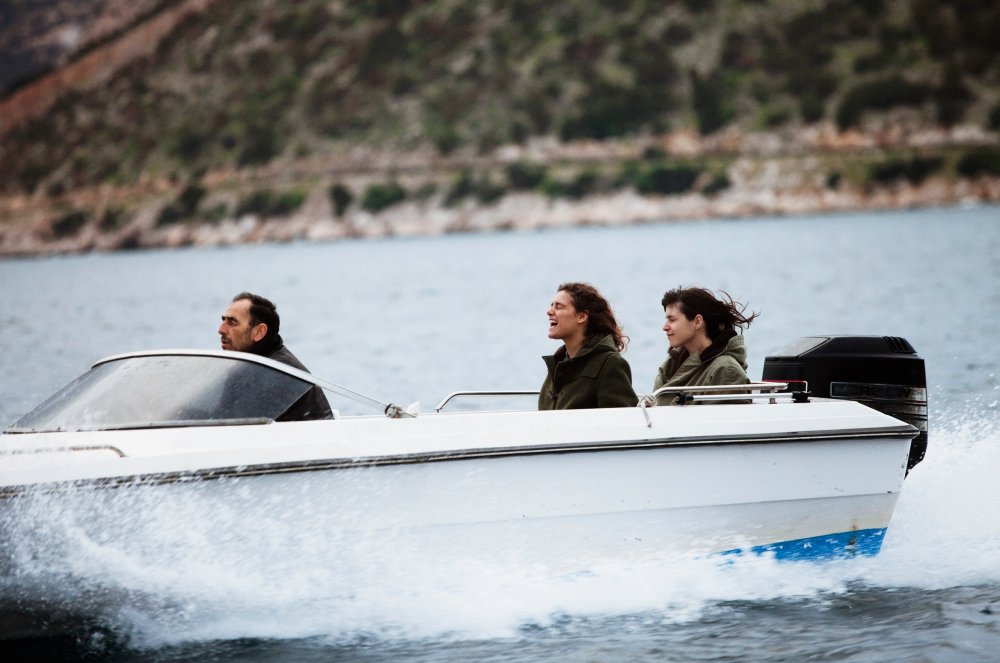 Tsangari’s feature before Chevalier is an unclassifiable drama of sexual confusion, modern alienation and female friendship. It’s filtered through the misfit eyes of Marina, an isolated young woman who spends her days indoors, obsessed by David Attenborough’s nature documentaries. Marina is the daughter of chronically ill architect Spyros, and they live together in a spacious home in industrialist Greece.

Initially, Tsangari seems to borrow from the airless upper-class ennui of Antonioni, but strains of spiky, irreverent humour and strange sexuality poke holes in any strict modernist homage. Still, it’s hard not to imagine the mood of the film fits larger echoes of turmoil in the country – in an undefined way, it latches onto a widespread sense of loss and disorientation.

Although made by an outsider, OXI is an insightful, philosophical response to the Greek economic crisis, placing it in a historical and cultural context wider than any traditional historian or economist might. The film is named for the Greek word ‘no’ – something symbolically important to anyone of Greek heritage. ‘Oxi Day’ is a national holiday of some importance in Greece, marking the date in 1940 when the Greek republic stood up against invading Italian forces.

Using this national spirit of defiance as a guide, Ken McMullen explores both ancient history and the contemporary mood. Heavy on quotations and poetry, it’s an intellectual exercise but also a poetic one, peppering the documentary with fictional snippets. For that reason, it’s as hard to categorise as plenty of the homegrown Greek features being released – meaning that it fits in nicely among the current national cinema.