10 great films to get teenagers into Shakespeare

These Shakespeare adaptations have enough star charisma, romance and bloodshed to grip even the most soliloquy-phobic of viewers. 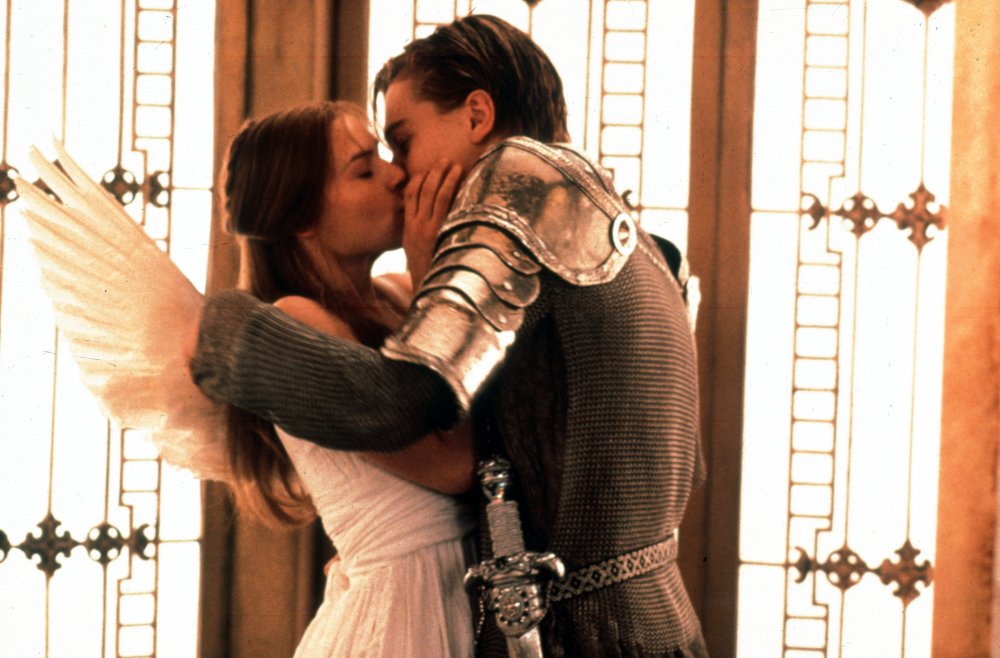 Although he has been six feet under for 400 years, William Shakespeare continues to be one of cinema’s most prolific storytellers and inspirers. His works have been performed in front of audiences for almost half a millennium, and continue to be told with reliable regularity on the big and small screens.

While the plays of Shakespeare are multiple and abundant, both in written and filmed forms, accessing his works can be something of a challenge. Considered by many to be a relic of dusty classrooms, introducing the works of the Bard to a new, and particularly younger, audience is a challenge. Cinematic adaptations can prove an effective launchpad, helping new viewers navigate their way through the antiquated dialogue and connect with the universal themes – love, revenge, jealousy, redemption – at their core.

Whether straightforward (such as Kenneth Branagh’s full-text Hamlet (1996) or Laurence Olivier’s Henry V (1944), Hamlet (1948) and Richard III (1955)) or imaginative, original retellings (like Romeo and Juliet musical West Side Story, Akira Kurosawa’s King Lear-inspired Ran or even 1956 sci-fi classic Forbidden Planet, which is effectively an intergalactic translation of The Tempest) the right adaptation can throw glorious light on the complexities of the Bard.

It’s impossible, of course, to condense these films into a definitive shortlist. The 10 considered here are something of a capsule collection, examples of just how relevant and enthralling Shakespeare can be for today’s young audience. 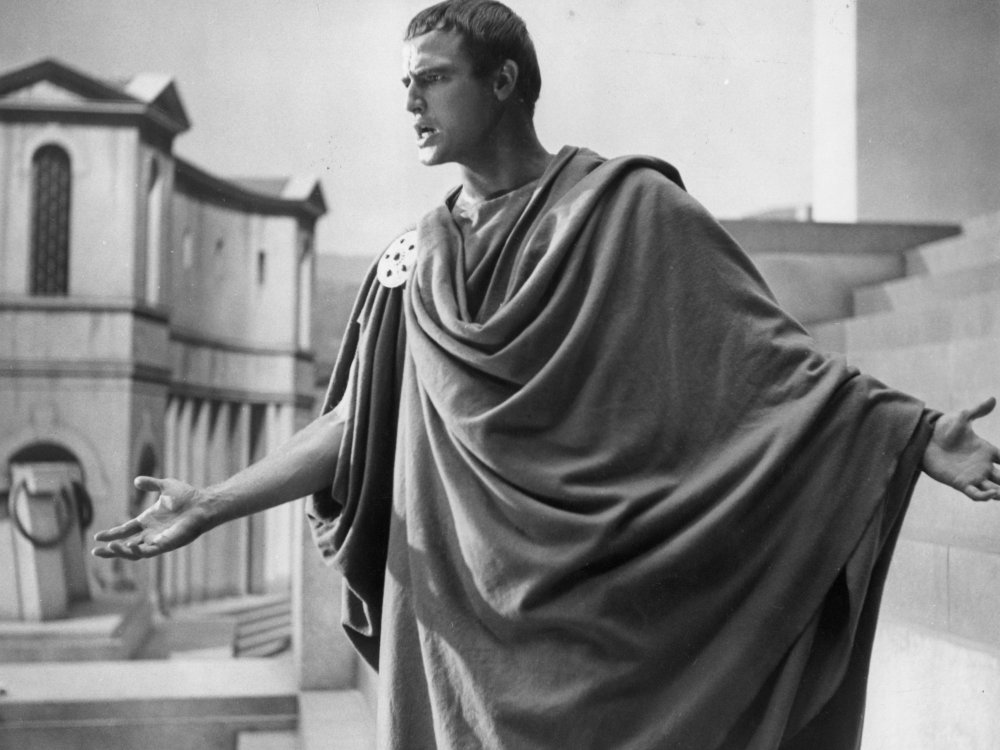 Star Marlon Brando was Oscar-nominated for his role as Mark Antony in this 1953 black-and-white classic by Joseph L. Mankiewicz (the legendary filmmaker behind such enduring films as All about Eve, Guys and Dolls, The Barefoot Contessa and Cleopatra). It’s an unmissable performance. At the time, Brando was emerging one of the greatest stars of American cinema; his burly physique and hot-headed passion are as perfect here as they were in A Streetcar Named Desire two years previously, and would be through a career full of classics to come.

While it’s shot through with violent intent, it’s not an actioner in the modern sense of the word. Its set up is as intimate as Shakespeare’s staging intended, but this Julius Caesar resonates with energy. The commanding prowess of powerhouse actors Brando, John Gielgud (as Cassius), James Mason (Brutus) and Louis Calhern (Caesar), and the intense political interactions of their characters – great men circling each other with murderous ambition – remains mesmerising to watch. 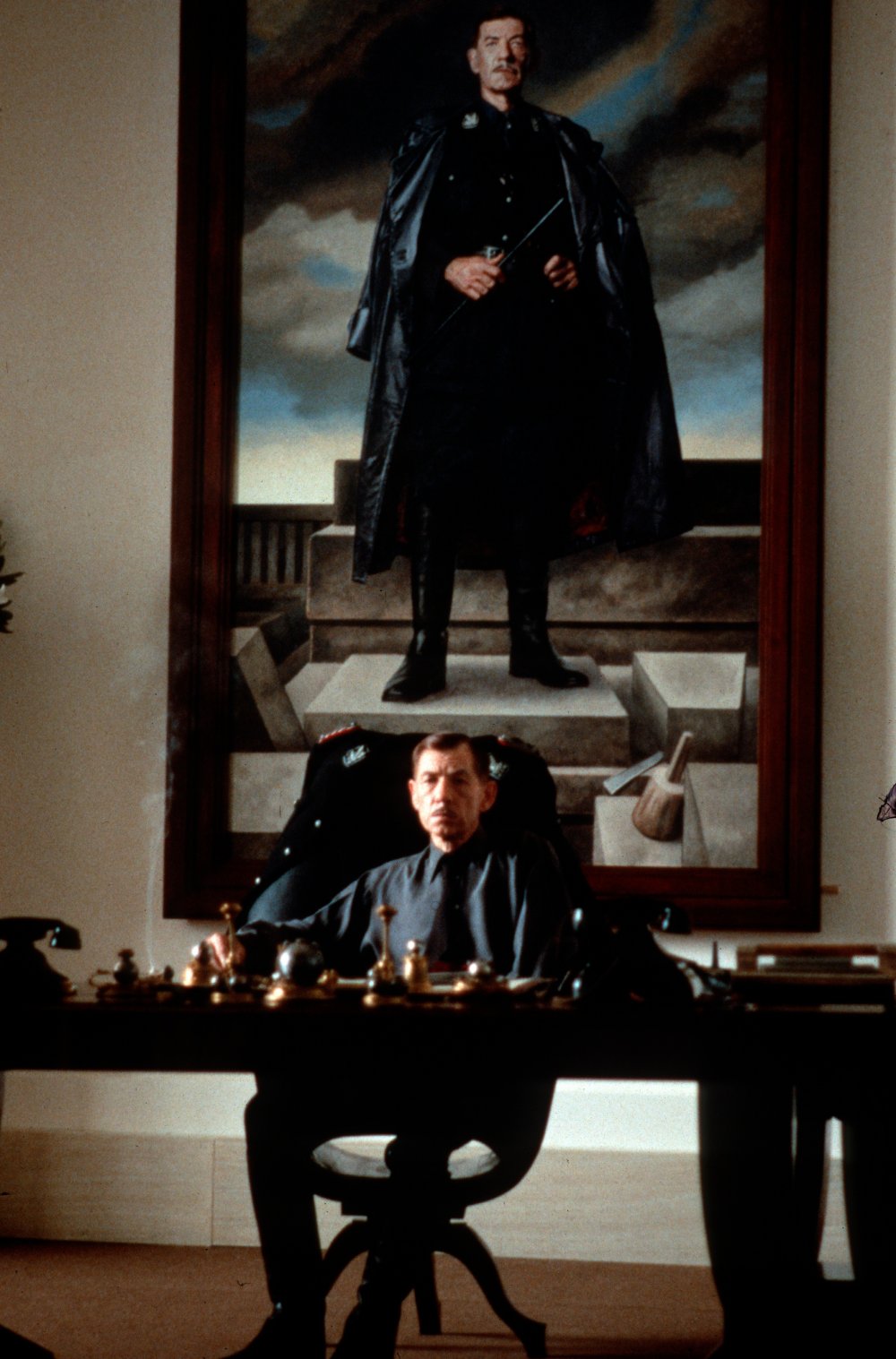 This Oscar-nominated adaptation of one of Shakespeare’s earliest, and longest, plays was born from a Royal National Theatre stage production which starred Ian McKellen, who then co-wrote the film screenplay with director Richard Loncraine and again takes the lead.

Here, the story of the shadowy rise to power of the titular king is transposed, brilliantly and fittingly, to a fictionalised, fascist version of 1930s Britain, in which Richard is cast as a Hitler-esque dictator riding roughshod over his subjects. Its strong visual aesthetic is a triumph; a considered blend of Nazi propaganda with recognisably British and American wartime paraphernalia making for an uneasily realistic landscape through which McKellen strides with Machiavellian purpose.

As Richard, McKellen is exceptional; born to play Shakespeare, he inhabits the character with relish and recites the dialogue with commanding authority. He is the figurehead of a brilliant cast, which includes Annette Bening, Jim Broadbent, Robert Downey Jr, Kristin Scott Thomas, Maggie Smith and Dominic West, who all help turn the play into an effective, and chillingly relevant, slice of alternative history. 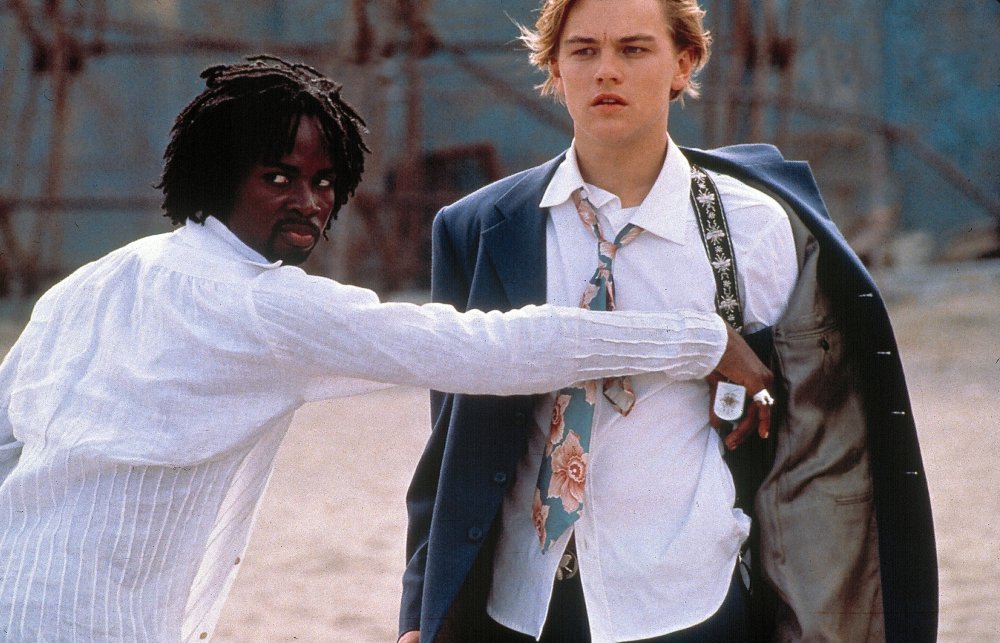 Following his smash hit debut Strictly Ballroom (1992), Australian director Baz Luhrmann took on Shakespeare’s greatest love story and, as a result, made the work of the Bard a firm favourite with teen audiences.

While Luhrmann and fellow screenwriter Craig Pearce update the action to the modern Californian suburb of Verona Beach, where the Montagues and Capulets are gangs involved in a turf war, they made the bold decision to retain Shakespeare’s original dialogue (albeit somewhat pruned). Together with the energetic cinematography from Donald McAlpine and an eclectic soundtrack, which features the likes of Garbage and The Cardigans alongside punk and choral music, it’s a dynamic and effective juxtaposition of styles.

As the star-crossed lovers themselves, Leonardo DiCaprio and Claire Danes have both youthful exuberance and palpable chemistry, and effectively convey the themes of the play, both light and dark. 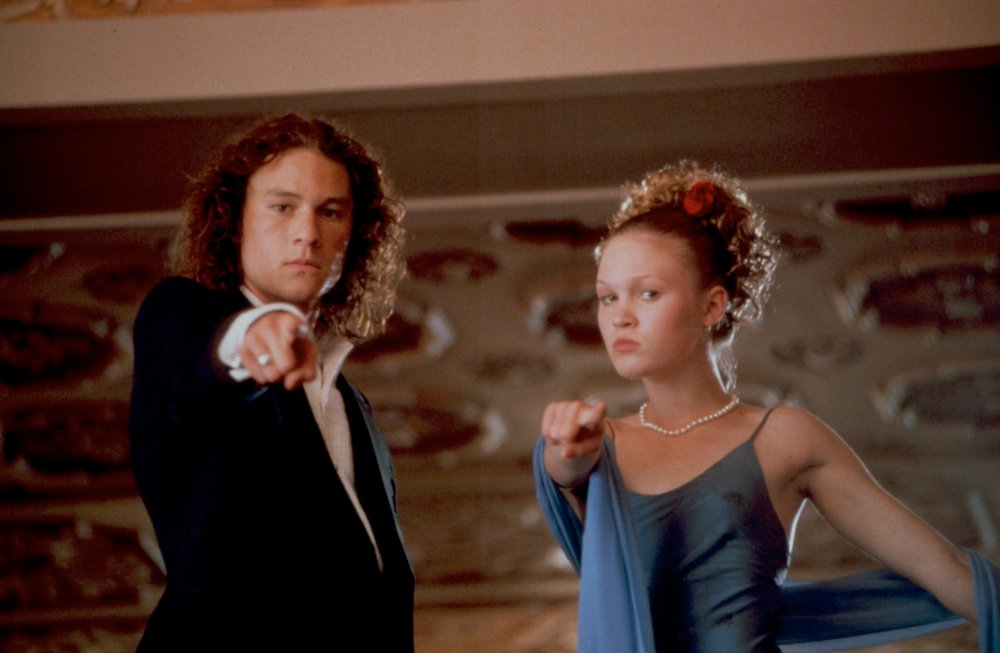 Three years after Romeo + Juliet proved that there was a voracious youth market for Shakespeare, screenwriters Karen McCullah and Kirsten Smith translated gender comedy The Taming of the Shrew into a modern American high-school movie. While Shakespeare’s version sees the lovestruck Petruchio tormenting the headstrong ‘shrew’ Katherina into emotional compliance, McCullah and Smith’s screenplay is rather more innocent teen romance. It sees student Cameron (Joseph Gordon-Levitt) plotting to get bad boy Patrick (Heath Ledger) to date the ill-tempered Kat (Julia Stiles), so that he can get close to Kat’s sister, Bianca (Larisa Oleynik).

The strength of this film lies in its performances; the teen foursome at its heart are all beautiful and charming, Allison Janney gives a wonderful turn as a exuberant school councillor and Daryl Mitchell is hugely entertaining as a rapping English teacher. It’s all good fun and, while it may be inspired by the Bard rather than a direct adaptation, it’s an unintimidating entrance point into his work. 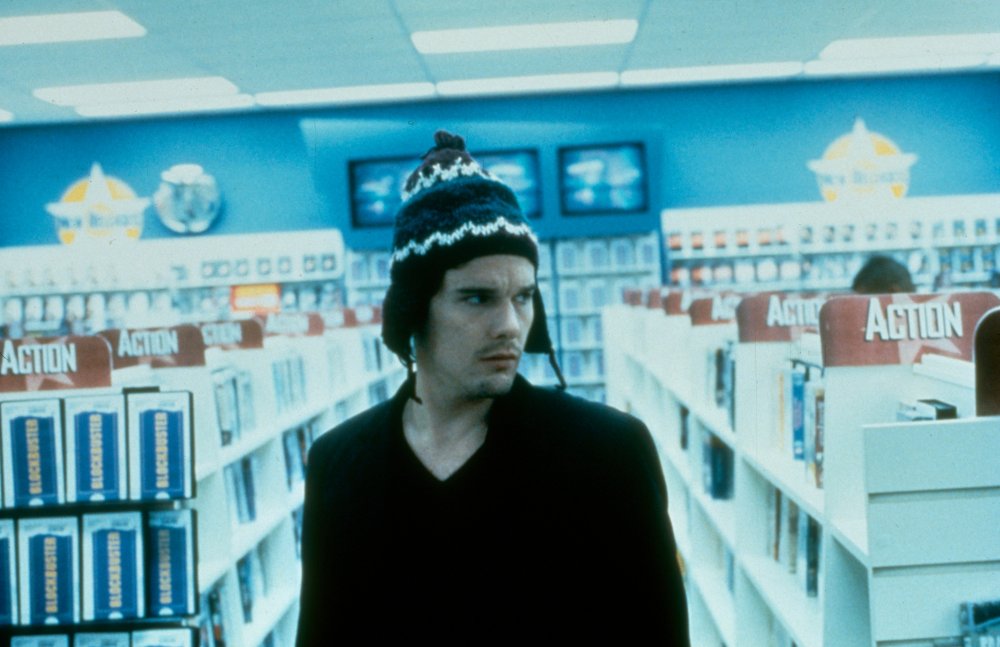 In terms of making the text accessible to a new audience, however, Michael Almereyda’s audacious retelling, which stars Ethan Hawke as the young man avenging the death of his father in modern-day New York, is an ideal choice. The cast is superb – alongside Hawke is Julia Stiles as Ophelia, Bill Murray as Polonius and Kyle Maclachlan as Claudius – and the set pieces bold; Hamlet delivers his famous “To be or not to be” soliloquy wandering the aisles of a video store. Despite the Shakespearean dialogue, this is a thoroughly recognisable modern fable of corruption and revenge. 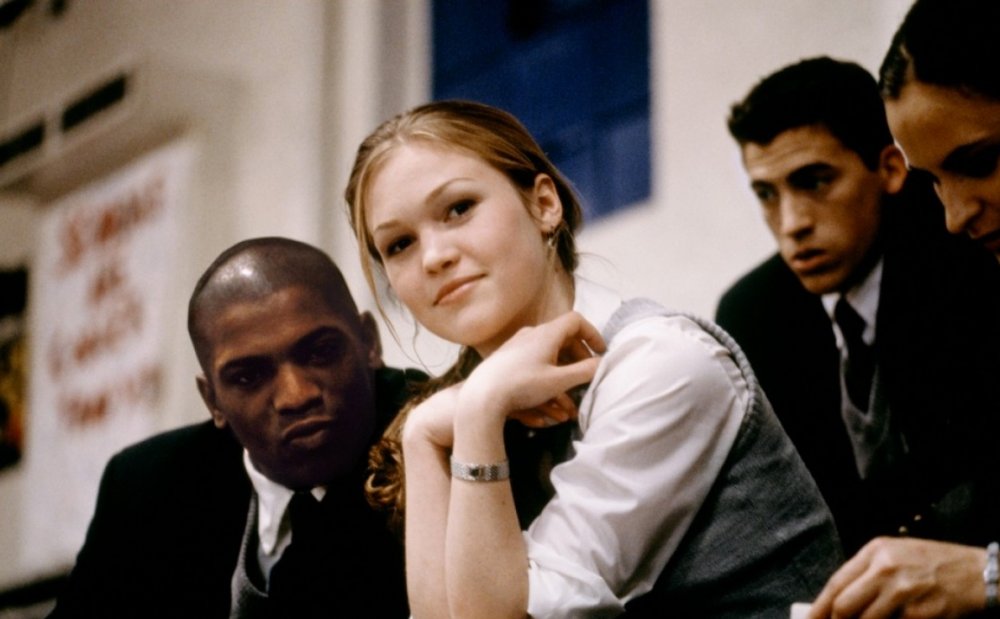 The teen Shakespeare revolution of the late-1990s continued early into the new millennium with this sexy version of his passionate tragedy Othello. Written by Brad Kaaya and directed by Tim Blake-Nelson, the film successfully transposes the plot – which revolves around the interactions between Moorish general Othello, his wife Desdemona, his loyal lieutenant Cassio and his trusted but unfaithful ensign Iago – to an exclusive American prep school. Josh Hartnett is basketball player Hugo Goulding, who plans to bring down star teammate Odin James (Mekhi Phifer) by suggesting that Odin’s girlfriend Desi (Julia Stiles) is sleeping with another student.

The cast bring an edgy style to the material, particularly Phifer as the tortured, put-upon Odin, and Harnett as the increasingly unhinged weaver of this tangled web. The original play’s themes of ambition, jealousy and revenge work well in such a setting of power and entitlement, and are naturally amplified both by adolescent angst and the foolhardiness of youth. 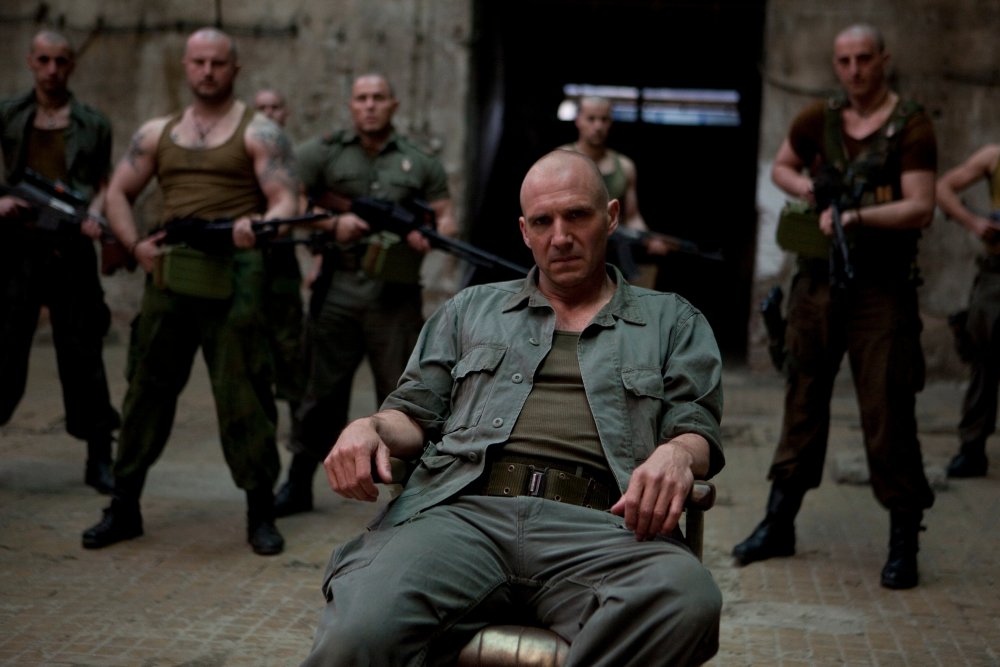 For his directorial debut, actor-turned-filmmaker Ralph Fiennes tackles one of Shakespeare’s lesser-known tragedies, and also takes the lead role of a successful Roman general who rises to political power only to be quickly deposed, later seeking to right the wrongs he feels have been done to him.

Screenwriter John Logan has imagined Coriolanus as an all-out action movie. Set “in a place calling itself Rome” (and shot on location in Belgrade), it unfolds within a modern war-torn city with grenades replacing swords and desert boots replacing sandals. Amid this carnage, however, much of Shakespeare’s dialogue remains intact, delivered with passion and precision by a stellar cast which also includes Gerard Butler, Brian Cox, Vanessa Redgrave and Jessica Chastain. This is the Bard turned up to 11, a bombastic, visceral version of Shakespeare that packs a powerful punch. 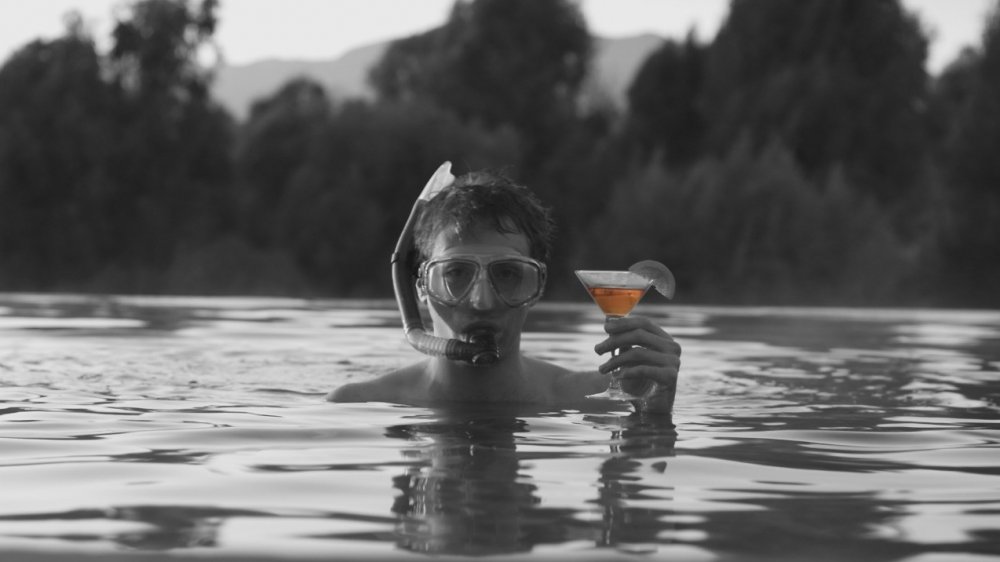 Shakespeare’s comedy of errors is one of his most popular works, and it’s no surprise that it has been adapted for the screen multiple times. One of the most entertaining is undoubtedly Joss Whedon’s black-and-white adaptation, which he shot in 12 days at his own Santa Monica home during a break from directing blockbuster Avengers Assemble (2012).

The result is as intimate and involving as you would expect, the cast – populated by Whedon’s friends and including fan favourites Alexis Denisof and Amy Acker as ill-matched lovers Beatrice and Benedick and Nathan Fillion as Dogberry – having great fun with the material, and each other. As they bound around the set, delivering Shakespearean dialogue with expert comic timing, their enthusiasm is infectious, and this battle of the sexes reveals itself to be as hilarious and on-the-nose as any modern romcom. 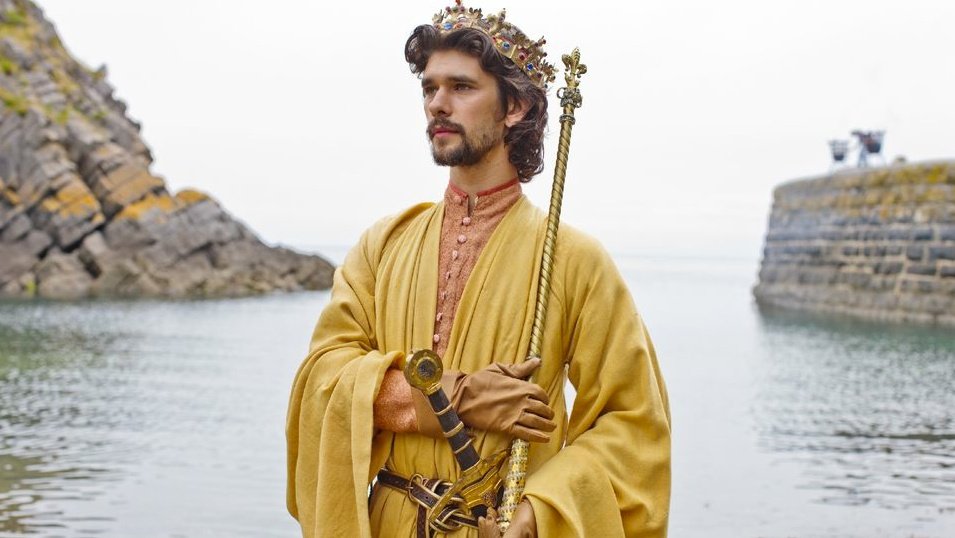 For those looking for an introduction to the works of Shakespeare, this star-studded BBC miniseries is something of a cheat sheet, as it consists of adaptations of the Bard’s second historical tetralogy, the Henriad – comprising Richard II, Henry IV Parts One and Two and Henry V – which begins with the overthrow of Richard II and follows Henry V’s evolution from wild youth to masterful warrior leader.

Tonally and narratively a straightforward small-screen adaptation, The Hollow Crown is made into something special by a stellar cast which brings together the very best of British talent, including Benedict Cumberbatch, Tom Hiddleston, Julie Walters, Sophie Okonedo and Ben Whishaw. It’s a simple joy to watch these masters of their craft delve into the material, and their talented performances provide a window into both the historical events being depicted and Shakespeare’s own brilliant storytelling. 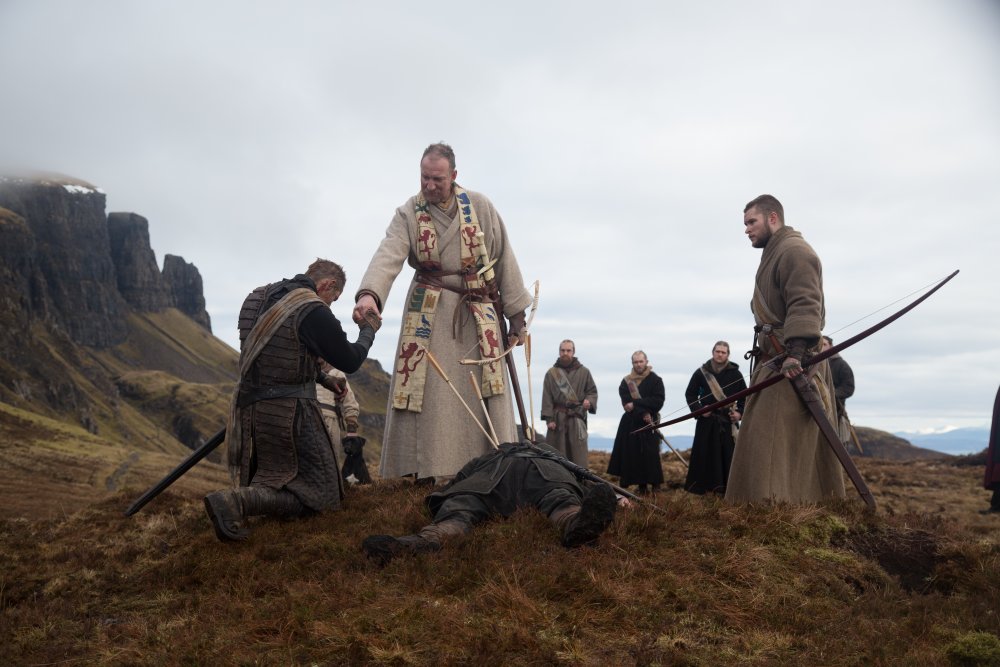 This violent tale of witchcraft, power plays and murderous ambition remains forever ripe for the big screen, from loyal adaptations such as those directed by Orson Welles (1948) and Roman Polanski (1971) to more cross-genre approaches, including Akira Kurosawa’s Japanese drama Throne of Blood (1957) and William Reilly’s mobster thriller Men of Respect (1990).

For his recent period piece, director Justin Kurzel tackles this centuries-old tale with a modern filmmaking sensibility. Painting in mud and blood, he combines the Bard’s rich, dramatic language – skillfully adapted into an adrenaline-fuelled screenplay by Jacob Koskoff, Michael Lesslie and Todd Louiso – with an atmospheric Scottish landscape, evocatively lensed by master cinematographer Adam Arkapaw. And at the centre of it all are powerhouse performances from Michael Fassbender, as Macbeth, and Marion Cotillard, as Lady Macbeth. They navigate the drama and intimacy of this story with ease. Breathtaking, devastating and utterly cinematic, it’s one of the purest and most exhilarating versions of the tale.