Country towns, desolate moorland and the Lake District all take starring roles in our round-up of unmissable films set in Cumbria, Cheshire and Lancashire. 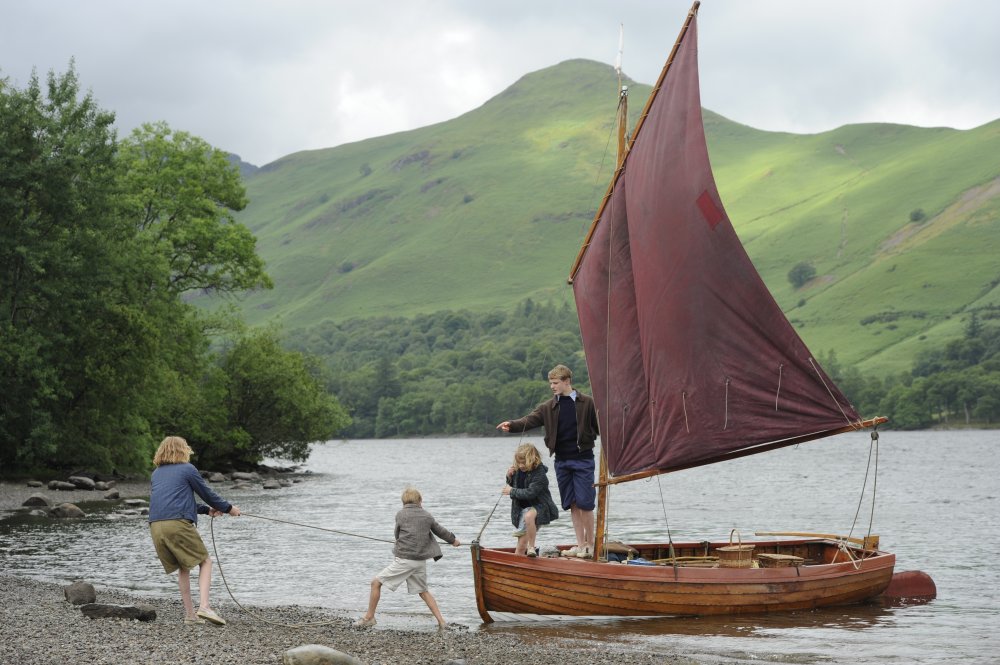 Swallows and Amazons, backed by the BFI Film Fund, is in cinemas from 19 August 2016

“Do you know, I believe we should all behave quite differently if we lived in a warm, sunny climate all the time. We shouldn’t be so withdrawn and shy and difficult.” – Brief Encounter (1945)

With Philippa Lowthorpe’s adaptation of Arthur Ransome’s Lake District-set novel Swallows and Amazons once again shining a light on the landscapes of north-west England, the long cinematic tradition of showcasing the region and its huge range of dramatic landscapes is continued into the 21st century. From the rolling, mountainous ranges of Cumbria and the Lake District to the moorland of Lancashire via the magical plains of Cheshire to the inner-city zones of Manchester and Liverpool, the region has a wealth of cinematic history that often marks a film’s topography out from more typically-set peers.

The area at once seems to bring out the stranger and more hushed-up secrets of cinematic dramas. Quiet affairs sparking into existence at railway stations and jealous love triangles over backdrops of arcades, estates and picturesque lakes. Mistaken second comings in Lancashire barns, undesired second comings in Peak District vistas and failed first comings in Uncle Monty’s Crow Crag. Trauma travelling across the Cheshire plains and epochs through a stone fallen from the stars and the story of a magnet causing dismay for a young James Fox on Merseyside.

For the sake of simplicity, films that are set purely in Manchester and Liverpool have been omitted – both cities rightfully deserving lists of their own – with emphasis instead put on the anomalies of small country towns, local county retreats and lesser-visited areas hidden behind the ley-lines of obscurity. 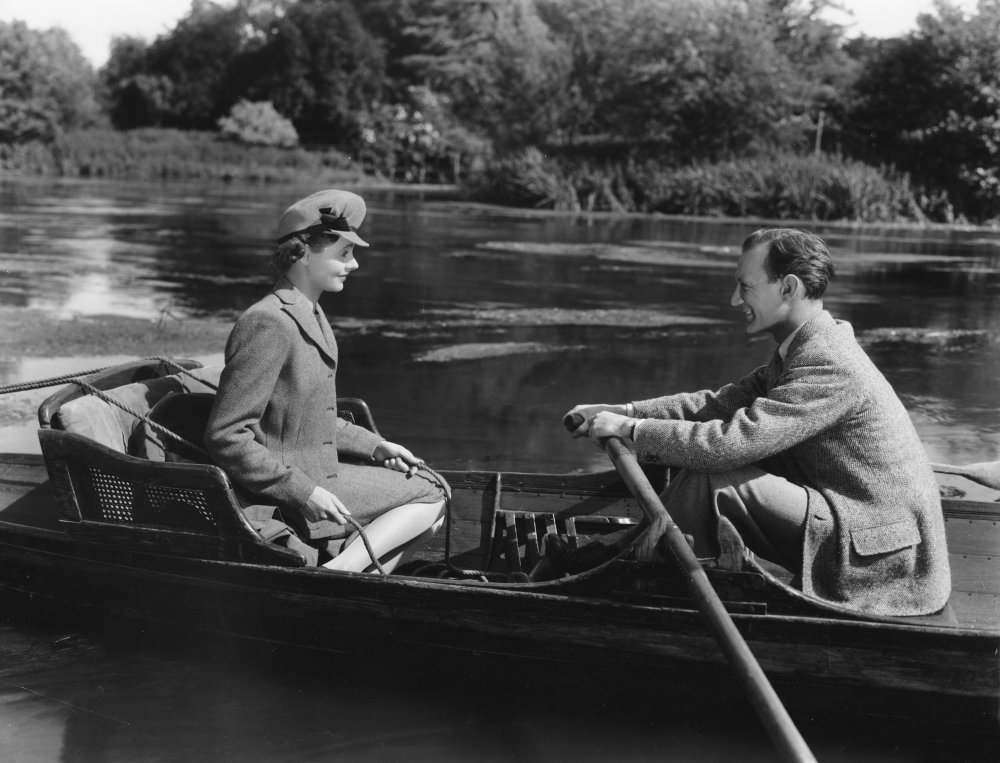 Brief Encounter was one of four collaborations between David Lean and Noël Coward and is one of British cinema’s most well-known classics. Its tale of a repressed and momentary love between a married woman (Celia Johnson) and a doctor (Trevor Howard) pivots around its location of Carnforth train station in Lancashire; a location chosen because of its relative distance from dangerous locations during the war.

When the pair venture into the country on a walk, they eventually find themselves on a bridge declaring their feelings for each other. This bridge is actually in Ambleside, north of Lake Windermere in Cumbria though the pair manage to get back to Lancashire just in time for their trains. Carnforth Station now has an exhibition dedicated to Brief Encounter, with a restoration in 2003 meaning the many rooms featured in the film are almost exactly as they were then, along with a mini cinema room that has the film playing on a loop. It may also have the unique status of being the only British train station to stock multiple copies of Kevin Brownlow’s essential biography of David Lean. 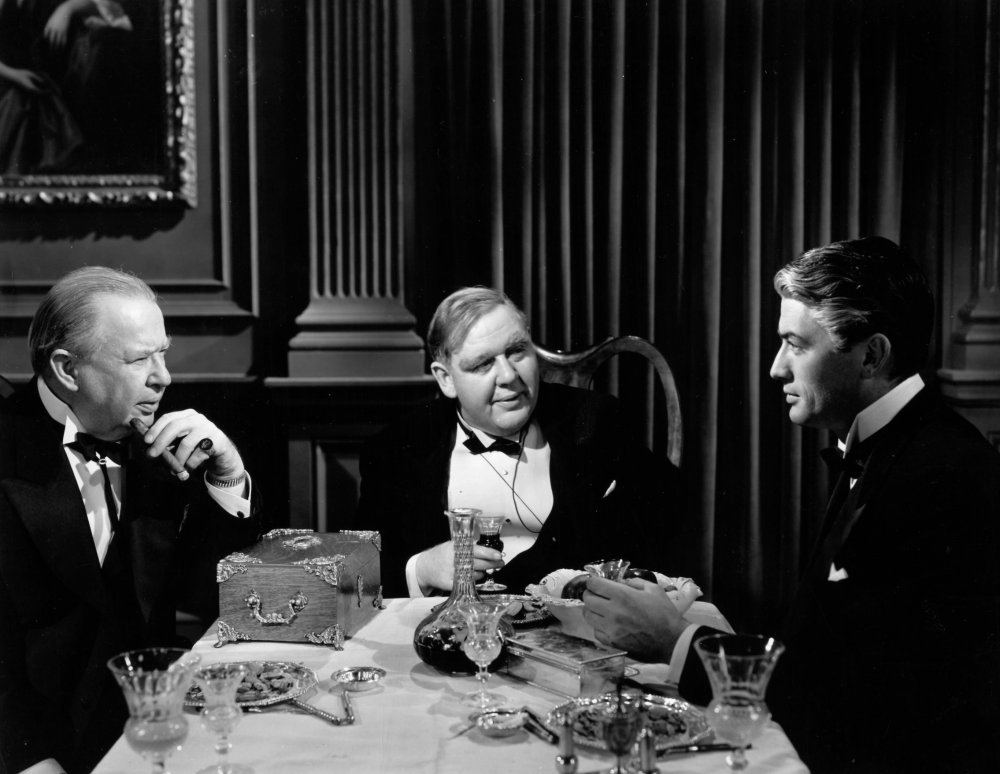 Alfred Hitchcock’s courtroom drama may seem an unusual choice at first, with the majority of its action happening in the halls of law (and shot on David O. Selznick’s studio lot in Hollywood), yet the heart of its criminal occurrence takes place in a vast house in the Lake District. Alida Valli plays the supposed murderess, Maddalena Anna Paradine, accused of poisoning her older husband in another Windermere lakeside location while her married defence lawyer, Anthony Keane (Gregory Peck), begins to fall in love with her.

The house in the film is named ‘Hindley Hall’ but is actually the Langdale Chase Hotel, more famous for its afternoon teas than unlawful killing by arsenic. When Keane attempts to investigate the past of his client, he arrives in the Lakes at the Old Station in Braithwaite, since turned into a private house with the closure of the train line (Hitchcock’s famous regular cameo even occurs here). Keane also spends his stay in the briefly seen ‘Station Hotel’, which is actually the Drunken Duck Inn on the other side of the lake. 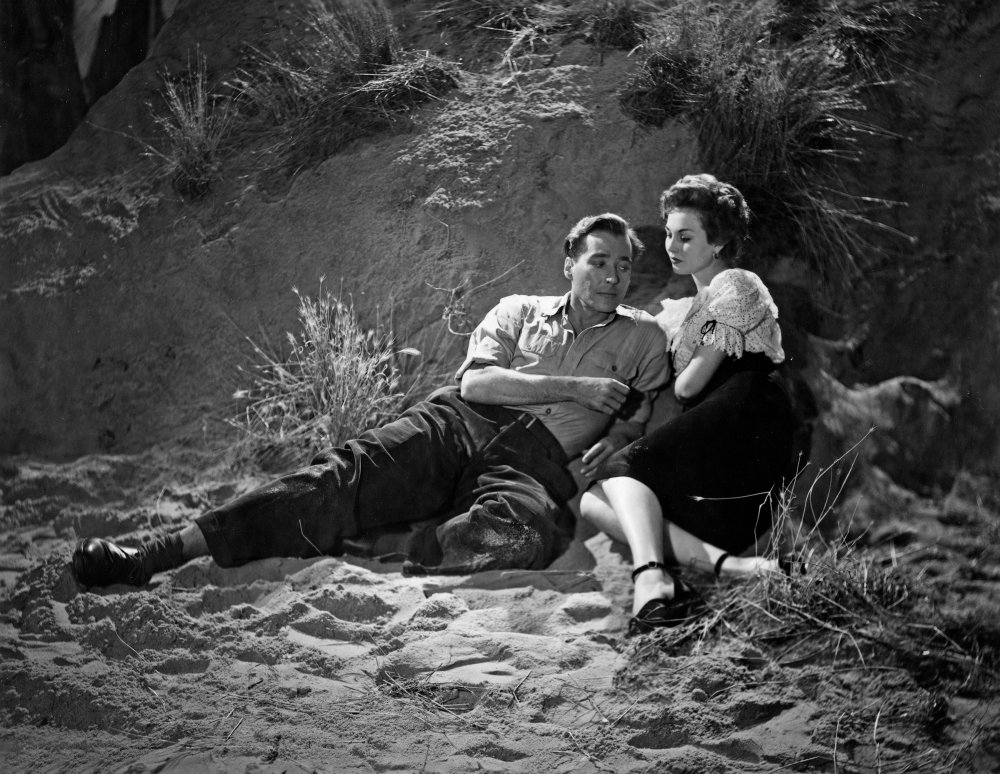 Sometimes known as Scarlet Heaven, George King’s tale of love and jealousy is heavily dependent upon its Blackpool surroundings and weaves its drama into the very seafront itself. From its opening shots of the town’s Golden Mile of arcades and fun fairs to its final climax in Blackpool Tower, Forbidden makes the most of the seaside resort’s lights and action more than any other British film (perhaps alongside Gurinder Chadha’s 1993 film, Bhaji on the Beach).

The mile also makes an appearance in Tony Richardson’s A Taste of Honey (1961) as the family of the film go out for a day away from the cobbles of Manchester, though Rita Tushingham is far less impressed by its rides and carnival mania than Forbidden’s raft of candy-floss peddlers and fairground health tonic pushers. 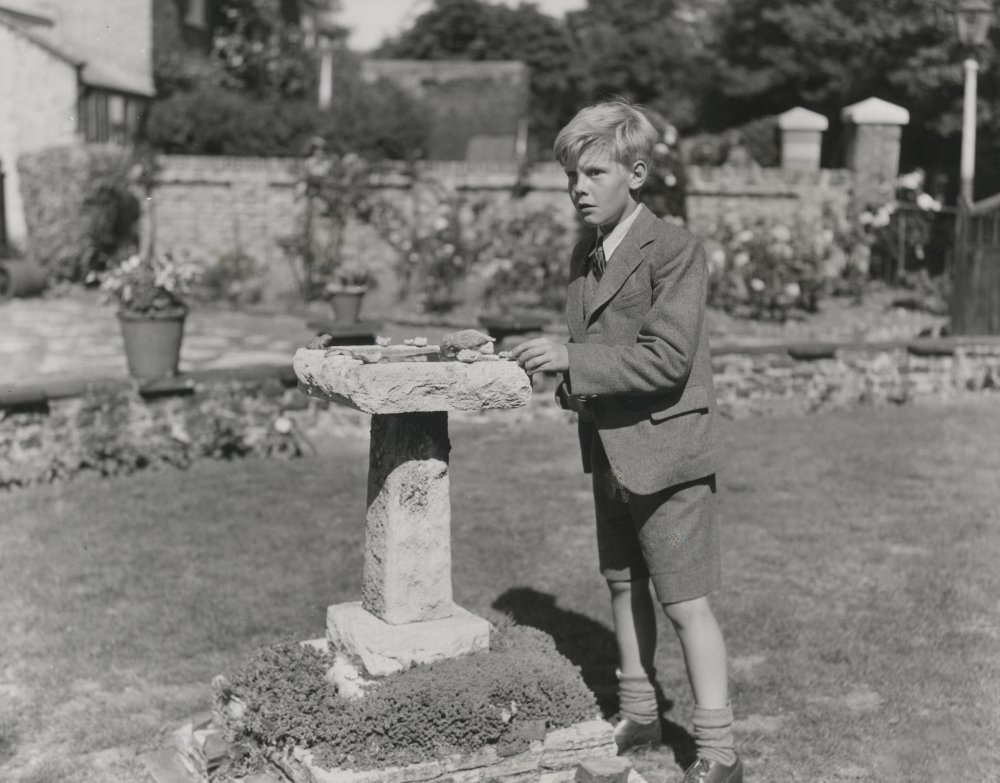 A young James Fox wanders the beautiful seaside streets and arcades of New Brighton on Merseyside in Charles Frend’s 1950 Ealing classic. At this point in history, the resort was still flourishing, with its tower building (though not the tower itself), pier and huge public bathing pools, all of which Frend takes full of advantage of as Fox’s young lad goes on the run after conning a magnet off another boy.

Of particular note is the attention Frend pays to Fort Perch Rock; an old Victorian defence installation which, along with the arcades, is one of the few buildings seen in the film still left standing today. New Brighton has changed dramatically since Frend filmed The Magnet, the transition documented most famously in Martin Parr’s photographic series, The Last Resort (1983-85). However, its beach front has had a consistent cinematic history in recent years, playing host to the final scene of Carine Adler’s Under the Skin (1997) and several scenes from John Akomfrah’s The Nine Muses (2010) and Kieran Evans’ Kelly + Victor (2012). 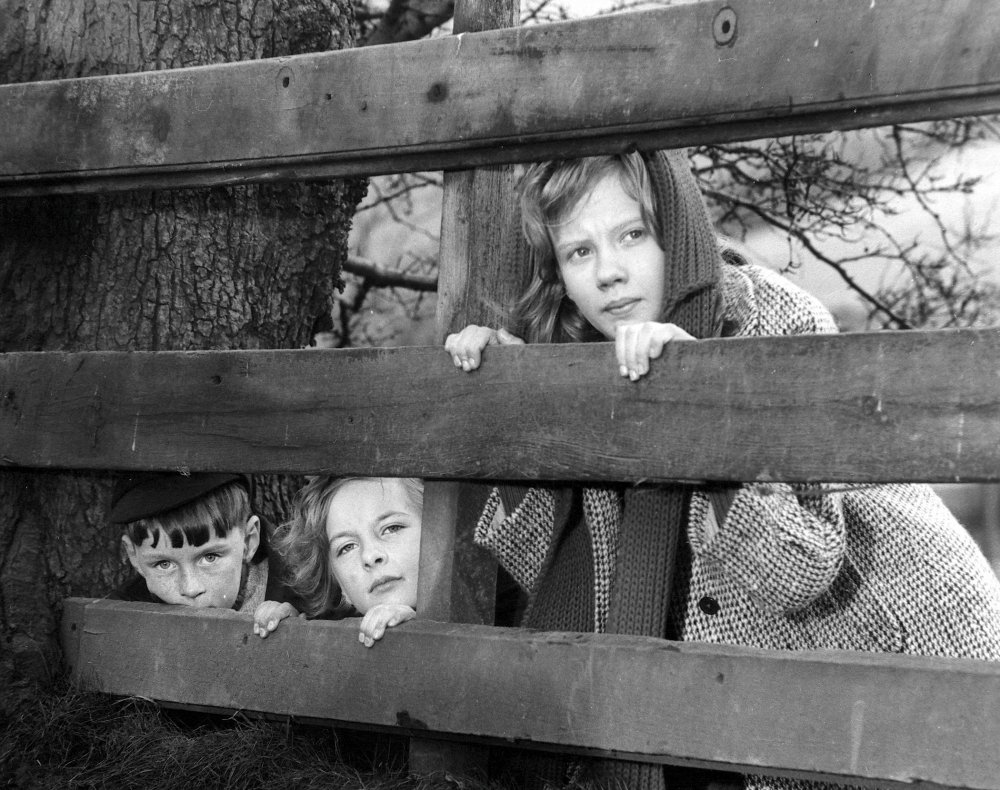 Lancashire’s hills have never been so finely captured than in Bryan Forbes’ touchingly innocent drama. Its tale of a group of Lancashire children (one of whom is Hayley Mills) mistaking a fugitive (Alan Bates) taking refuge in a barn for Jesus has a startling mixture of youthful naivety and an unexplored darker strain. This may perhaps derive from the film’s main location, that of Worsaw End Farm on Pendle Hill, north of Burnley; the area’s most famous export (though further south at a cottage in Barley) being witches.

The topography’s cragginess is reflected in Bates’ role as Blakey the criminal, especially after his brief respite in the barn while playing faux messiah. The majority of the film’s more populated scenes are filmed at Downham, a time-capsule Lancashire village still lying in wait for the second coming. 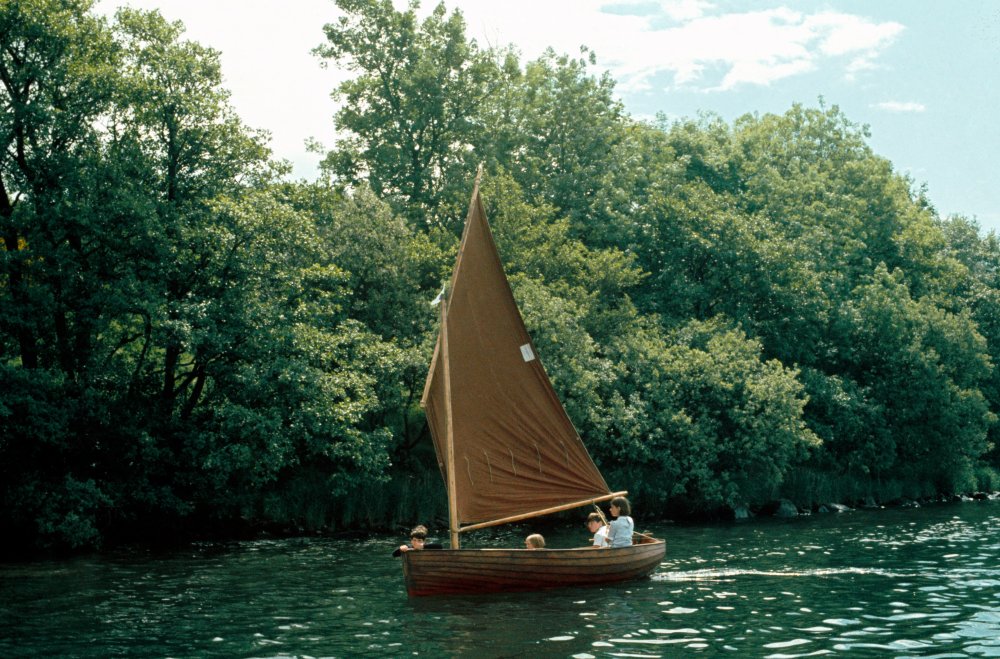 Arthur Ransome’s small-scale adventure novel has been adapted a number of times for various film and television series, though Claude Whatham’s 1974 take on the story is the classic version. Its narrative automatically requires the vast lakes of Cumbria, specifically the area around Coniston Water, which is dutifully explored with wonderful detail in the film.

A group of young tourists in the late 1920s take over a small island in the middle of the lake thanks to their boat named Swallow, before embarking on several minor adventures including the capture of a rival group’s boat (Amazon) and an attack on a boring uncle and his houseboat. Whatham indulges in the ‘lashings of ginger beer’ elements of Ransome’s story but balances this with some stunning photography of the surrounding landscape. A particular momentary shot of some cows drinking out of the lake at early dawn is a strangely profound and gentle vision of a typically dramatic landscape.

The Living Dead at Manchester Morgue (1974) 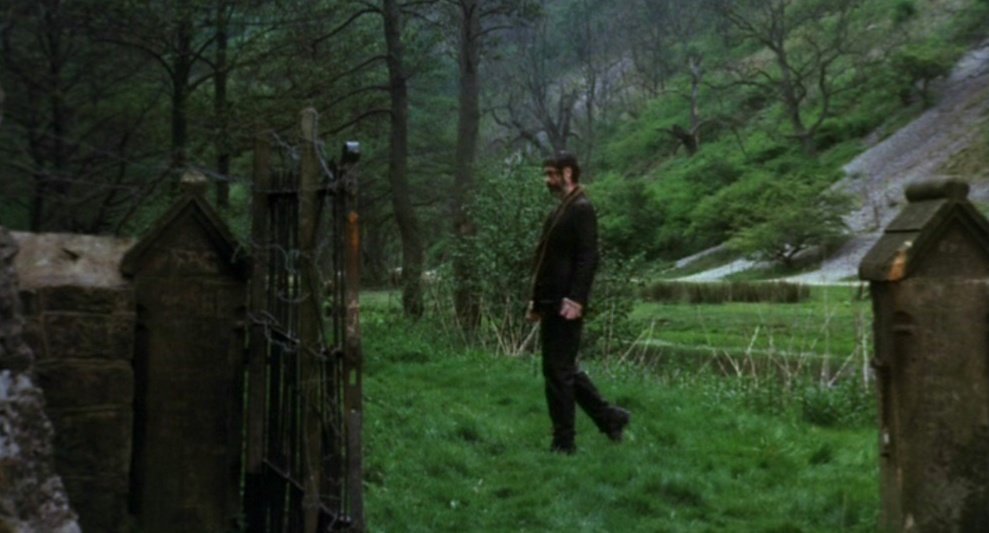 After a brief opening in urban Manchester, Jorge Grau performs a unique conjuring trick with his cult undead film. Claiming to be again set in the Lake District and Cumbria, the film’s rural vistas are in fact mostly shot in the Peak District instead (aside from a handful of roads near Windermere).

This illusion is broken most obviously when Edna (Cristina Galbó) is left in her mini while her friend George (Ray Lovelock) wanders off to find help with directions. She is menaced by a corpse from a churchyard, fleeing and attempting to cross the famous stepping stones over the River Dove before tripping and falling in. Nearby Dovedale is where a lot of the film’s action takes place though the church of the film lies in Hathersage, and Grau made effective use of many parts of the district. 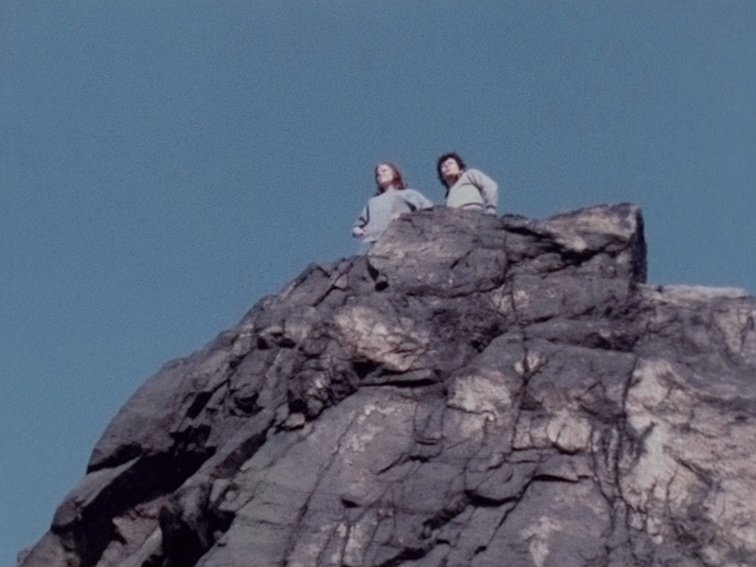 One of the defining BBC Play for Today episodes from its classic late 70s run, Red Shift sees Alan Garner’s novel about the time-shifting Cheshire landscape brought to vivid (if occasionally brutal) life by John Mackenzie. Garner’s folk horror-infused fiction has always derived its magic from the Cheshire landscape, specifically of the Arthurian rumblings under his native Alderley Edge and the beautiful plains around. Red Shift moves this slightly further afield some way down the A34 to Mow Cop as it follows three troubled young men from three different periods in history, all connected by their various emotional traumas and a strange stone said to have fallen from the stars.

Of equal Cheshire interest is the One Pair of Eyes episode All Systems Go! (1973), which looks into Garner’s work at the time of writing the original Red Shift novel with emphasis paid to his ancient home at Congleton, lying in the shadow of Jodrell Bank Observatory. 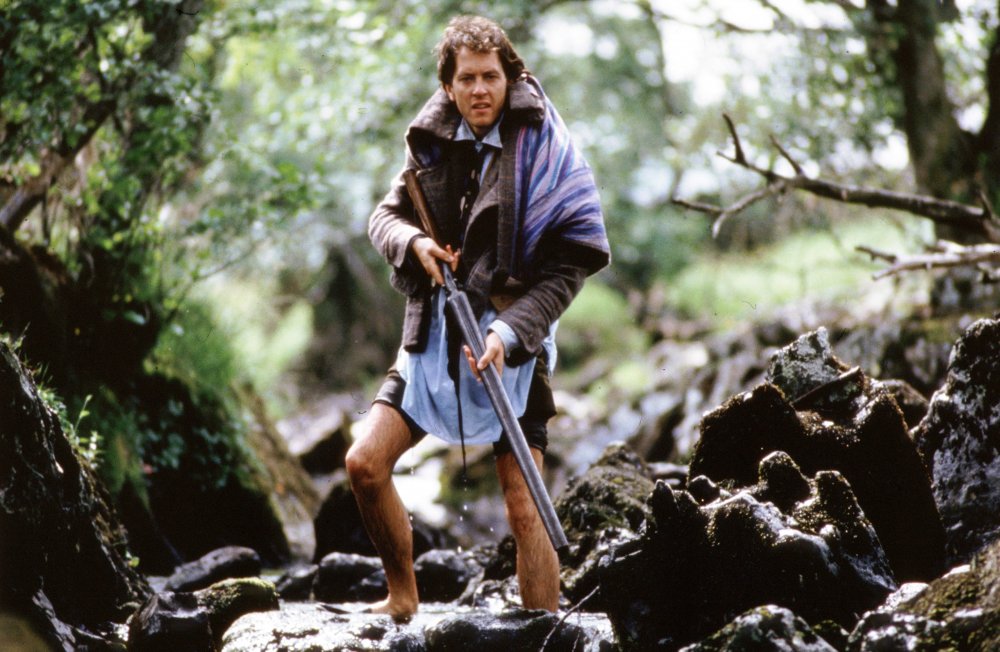 Though equally explorative of a seedy 1960s London under demolition, Withnail & I’s most enjoyable moments occur when the eponymous pair of deadbeat actors venture up to the Lakes to visit rich Uncle Monty’s (Richard Griffiths) isolated country retreat, Crow Crag. Once there, Withnail (Richard E. Grant) and ‘I’ (Paul McGann) embark on a series of misadventures as they face down the rural community with drunken debauchery and antisocial campery in their attempt to find food and “the finest wines available to humanity”; a real fear and loathing in the countryside.

In spite of being set in Penrith, Crow Crag is actually Sleddale Hall – half an hour’s drive north of Kendall near Shap – and is now owned by an architect. Visits can even be organised to see inside, though the bedrooms that saw Uncle Monty’s failed pursuits were actually filmed in Herefordshire. 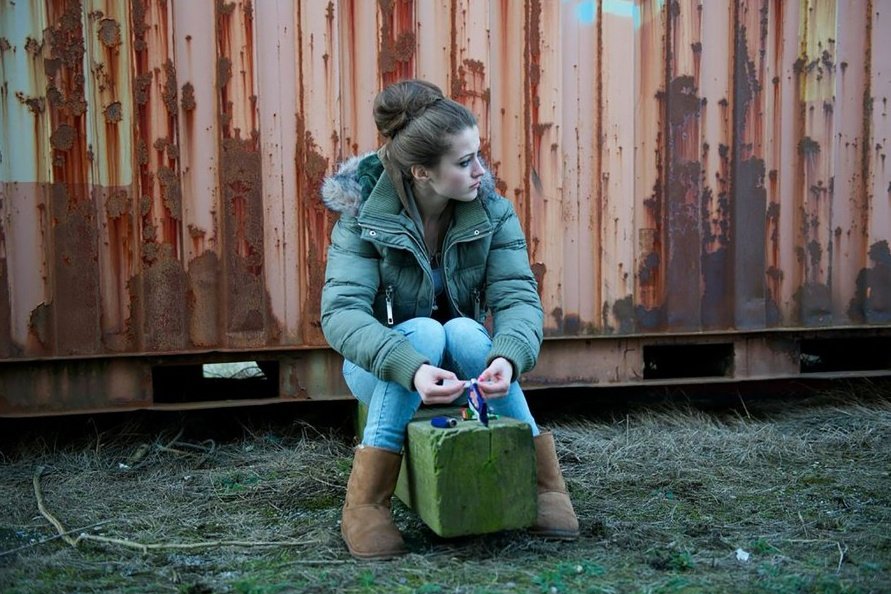 Helen Walsh’s debut feature sees the gritty drama of a mysterious friendship between two girls across a class divide unfolding around the estates and edgelands of Birkenhead on the other side of the Mersey. Though previously a novelist from Warrington and best known for the 2004 novel Brass, which deals with similar issues of a working-class female perspective upon modern urban life, Walsh found much creativity in moving to The Wirral, finding many of its interesting abandoned spaces around the old docklands and warehouses left to crumble on the river front.

These are the same landscapes used as a double for Liverpool in Jack Gold’s The Reckoning (1970), though Walsh’s film may just about be the first to be openly set in the area as well as filmed in its many derelict liminal districts.