Alan Clarke, Roman Polanski and Ken Loach are among the filmmakers who have taken inspiration from the people and places of England’s north-east. 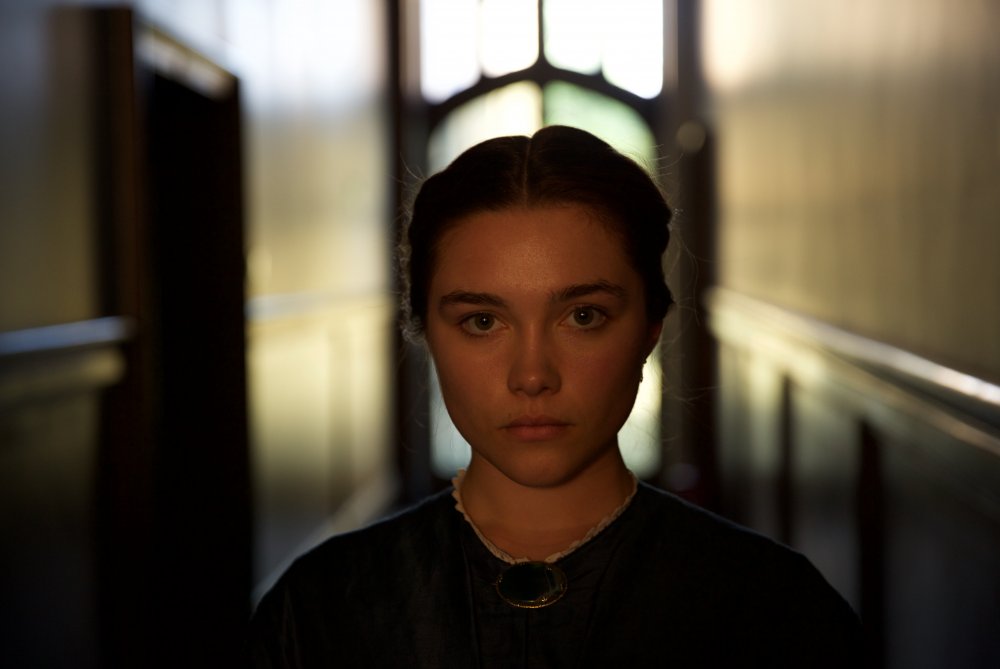 The title of Lady Macbeth – and its setting, Northumberland – suggests another cinematic marriage of Shakespeare to north-east England. Roman Polanski’s Macbeth (1971) was shot in Northumberland, and the sand dunes at Bamburgh Castle also feature in Justin Kurzel’s own adaptation in 2015. But William Oldroyd’s first feature takes its title not from the Bard but from Nikolai Leskov, whose 1865 novel Lady Macbeth of the Mtsensk District was first published in Fyodor Dostoyevsky’s literary magazine Epoch.

Lady Macbeth, championed by critics for its atmospheric use of north-east England’s landscapes, was actually shot in County Durham. Oldroyd, who studied theology at Durham University, joins a long lineage of filmmakers – outsiders and otherwise – who have been drawn to the region’s urban, rural and coastal locales. From state-sponsored educational shorts to last year’s Palme d’or winner, Ken Loach’s I, Daniel Blake, the north-east has proven to be a versatile cinematic setting, shaped by its strong sense of community and distinct (if far from heterogeneous) cultural identity.

Mines, shipyards, steelworks; Georgian architecture, heritage sites, national parks; beaches, rivers, city centres: though their finer nuances remain inevitably untapped, the range of such backdrops has resulted in a broad number of films shot wholly or partially in the area. These include Men of Steel (1932), On the Night of the Fire (1939), El Cid (1961), Women in Love (1969), Robin Hood Prince of Thieves (1991), Alien 3 (1992), Elizabeth (1998), Atonement (2007), We Are Not like Them (2013), Bypass (2014) and the Harry Potter films – to say nothing of Bollywood productions such as Apni Boli Apna Des (2009) and Hum Tum Aur Ghost (2010), or television series such as The Likely Lads, When the Boat Comes In, Our Friends in the North, Byker Grove and Downton Abbey.

In conjunction with Lady Macbeth’s release in UK cinemas, here are 10 key films set and/or shot in north-east England – with one unfortunate absentee owing to its unavailability online or on DVD. Jim Allen and Roland Joffé’s scorching Play for Today, United Kingdom (1981), about a Gateshead community rebelling against government cuts and mounting austerity, can nevertheless be viewed at all BFI Mediatheque sites.

Construction on the Tyne Bridge began in February 1928, and lasted seven months. Designed by Mott, Hay and Anderson – who were also responsible for designing the similar Sydney Harbour Bridge – and built by Teesside firm Dorman & Long, the bridge is surely the most recognisable of the several that span the River Tyne to connect Newcastle and Gateshead.

Dorman, Long & Co are also credited with producing this fascinating, 47-minute documentary, which records the construction with breezily informative intertitles, helpful animated interludes about cranes, and some genuinely brilliant footage – not least those low-angle shots from the riverside below, depicting workers, silhouetted against the daytime skies, walking along perilously high steel cables. 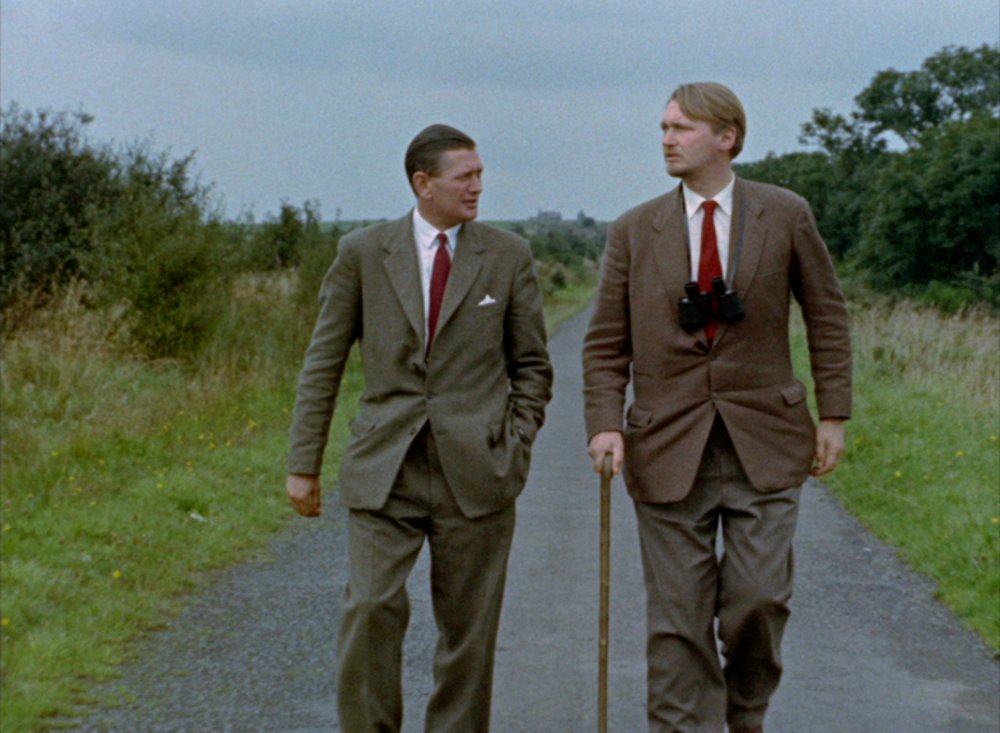 This half-hour curio, directed by and starring climber and self-ascribed adventurer Tom Stobart, might be less grand in scale than George Lowe’s Oscar-nominated The Conquest of Everest (1953) – on which Stobart was credited as a cameraman – but is equally fascinating as a portrait of a small steel town in County Durham. Commissioned by British Iron and Steel Industry, the film blends scripted scenes and documentary footage, contextualising Consett socially, industrially and geographically.

Stobart, limping from an incident involving a shotgun several years previously, filtered his experiences as a traveller and explorer into a number of films and books (including two on cookery), but the chief credit here goes to prolific cinematographer Fred Gamage. Like many of his contemporaries (such as Wolfgang Suschitzky and Jack Cardiff), Gamage began his career under the auspices of state-sponsored film production units, at a time that might today be argued to represent the pinnacle of British cinematography. The Technicolor displays here, both of Consett as a town and inside the steelworks, are exceptional. 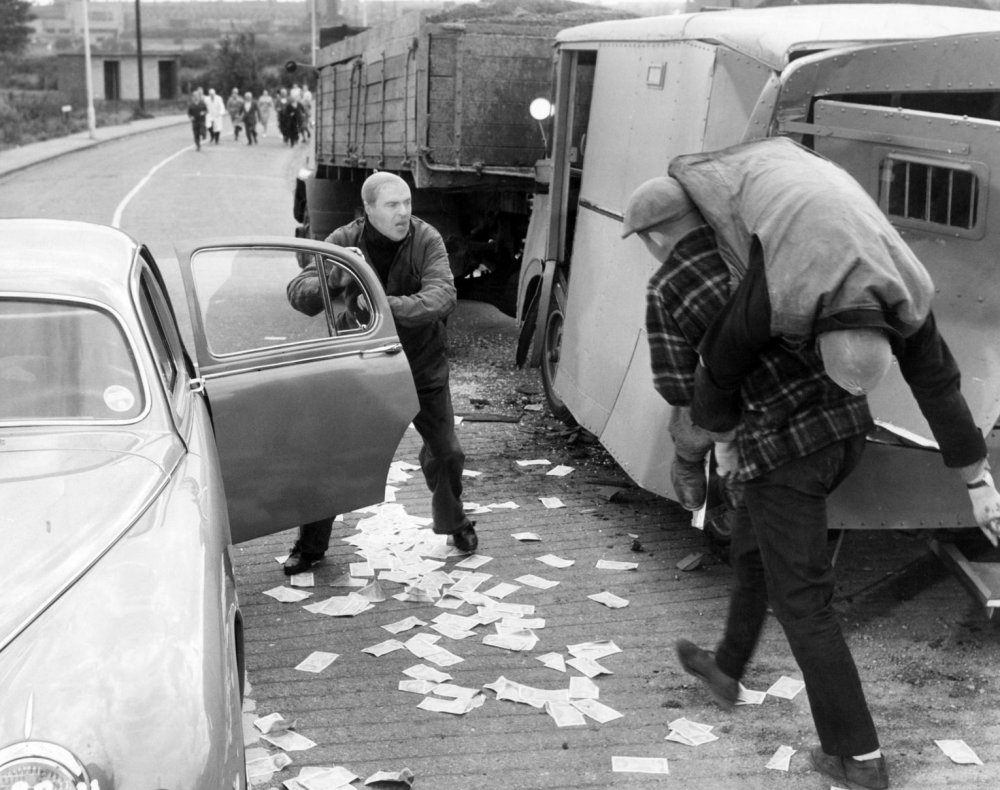 The source material for Payroll, an early novel by the linguist Derek Bickerton, was set in Birmingham. Adapted for the screen by George Baxt, however, Sidney Hayers’ crime thriller offers an opening-credits acknowledgement to “the authorities and citizens of Newcastle-upon-Tyne and District” — though there’s comically scant trace of a Geordie or north-east accent to be heard here.

Made 10 years before the even grittier Get Carter, Payroll is a film of two halves: the first centres on a gang led by handsome Johnny Mellors (Michael Craig), who prepare to rob a payroll van, while the second focuses on the prolonged fallout from the violent heist. Contemporary audiences might watch the film today and smile at the idea of its geographic sprawl – from Grey Street in Newcastle’s city centre to Seaton Sluice in Northumberland, from Tynemouth and North Shields to the Norfolk-set denouement — inspiring the likes of Michael Mann’s Heat (1995) or, given the prominent use of automobiles for its high-stakes shenanigans, the Fast and Furious franchise. 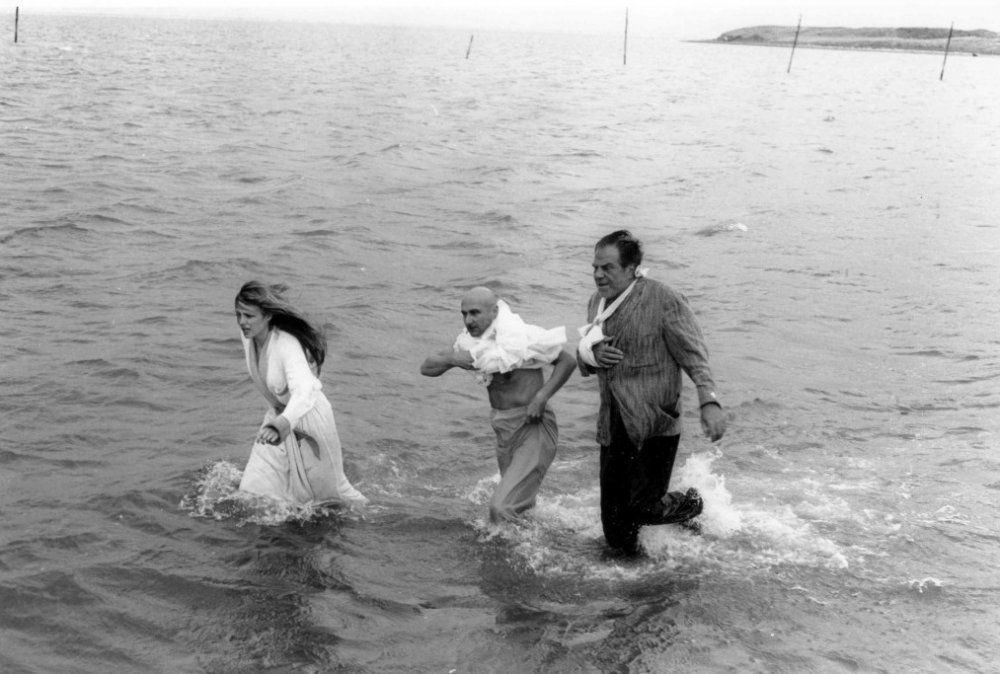 The tides move in famously and frighteningly fast at Lindisfarne. Roman Polanski and co-scriptwriter Gérard Brach figured the nightmarish scenario of getting caught out by incoming waters into the very premise of their darkly comic, supremely atmospheric Cul-de-sac, which opens with two gangsters (Lionel Stander and Jack MacGowran) struggling to restart their car on the mile-long causeway that connects Holy Island to mainland England on the Northumberland coast.

The picturesque locale is a readymade metaphor twice over: just as the tides do come in, forcing the stranded gangsters to seek shelter in Lindisfarne Castle (built 1550, known in the film as ‘Rob Roy’), we begin to witness the rapid decline of the site’s occupants (Donald Pleasence and Françoise Dorléac), a recently married couple who begin to feel the belated strain of living in such a remote setting. 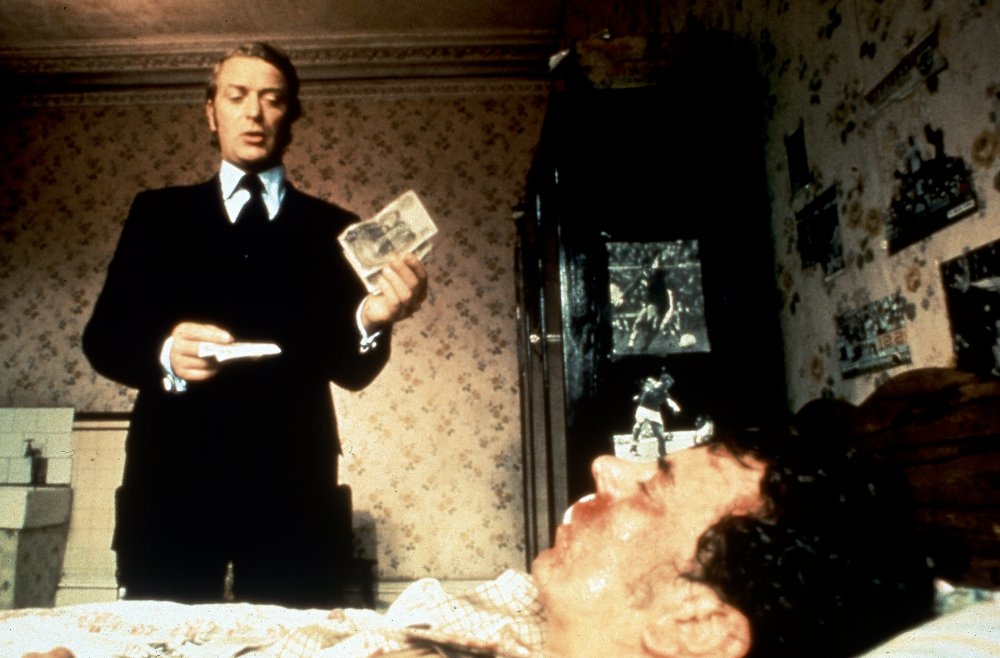 In Mike Hodges’ decisive debut feature, Michael Caine is Jack Carter, a London gangster who arrives in the shady backstreets of Tyneside to investigate the suspicious death of his brother. Sufficiently detached from the local gangland scene – and hard as nails – he’s able to give it the kicking it deserves.

Shot on location across Tyne and Wear by Wolfgang Suschitzky, the film features two outstanding scenes shot in locales that no longer exist. The first features a brutalist multi-storey car park in Gateshead’s Trinity Square – now the site of a multipurpose complex built by Spenhill, the property arm of Tesco – where Caine throws Bryan Mosley (better known as Coronation Street’s Alf Roberts) from the roof. The second is the film’s climactic sequence, which features the polluted beaches of Blackhall Colliery, County Durham – closed in 1981, and surely one of the finest settings for a closing scene ever captured on film. 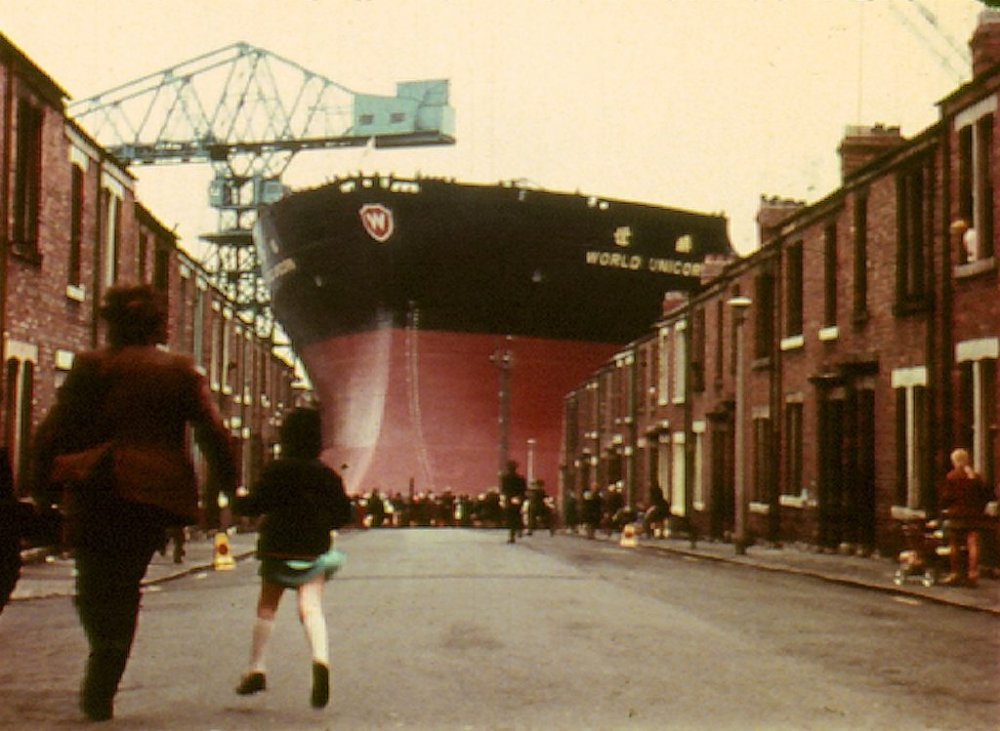 Amber, a staunchly independent collective of filmmakers, artists and exhibitors, is based in Newcastle’s Side, where it operates a cinema and gallery, and has, since 1969, produced a number of films notable for their collaborative ethos and ethno-geographic authenticity, such as Seacoal (1985), Eden Valley (1994) and The Scar (1997). But it’s their second film, Launch (viewable here), which is perhaps the most visually remarkable snapshot of a now bygone era for north-east working-class culture.

The 10-minute short documents the launch of the World Unicorn, a massive oil tanker built in Wallsend’s Swan Hunter shipyards, and is dominated by that surreal juxtaposition of the vessel standing like some dormant kraken at the end of an otherwise ordinary row of houses. At the end of the film, eerie and majestic, the ship groans to life and sets sail, like a giant hyperreal backdrop being dragged to one side. (See also: Neil Young’s overview of the collective, A culture preserved in Amber.) 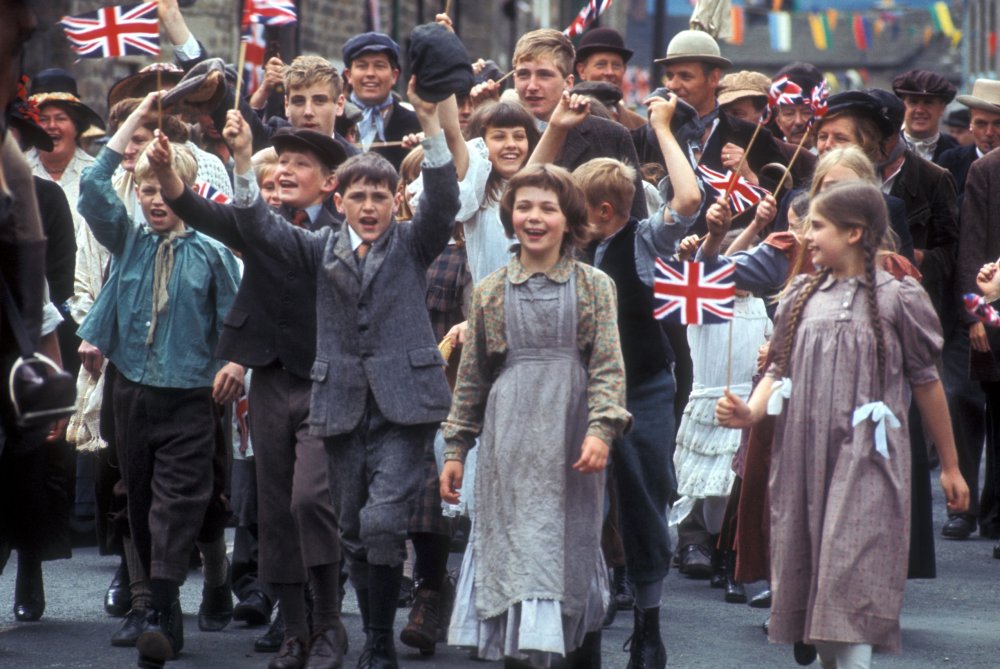 When Ken Loach won his second Palme d’or with I, Daniel Blake last year, one might have hoped for a theatrical reissue of Days of Hope, his ever-pertinent quartet of feature-length episodes broadcast by the BBC in September 1975. Tracing the evolution of a working-class family in Yorkshire, from the outbreak of the First World War to the 1926 General Strike, Days of Hope is perhaps Loach’s masterpiece. Scripted by Jim Allen, this is a politically razor-sharp dramatisation of an incredibly complex period in British history, one which comes down hard on the police, the military and the government in favour of a dialectically awakened revolutionary mass movement.

Framed – like his first Palme d’or winner, The Wind That Shakes the Barley (2006) – through the intimate prism of family ruptures, Days of Hope traces the political differences that are formed through lived experience: how one member of a family invests his energy in a career as a Labour MP, while another bases his distrust of parliamentary reformism on the bitter betrayals he encounters during the 1921 miners’ dispute in County Durham. 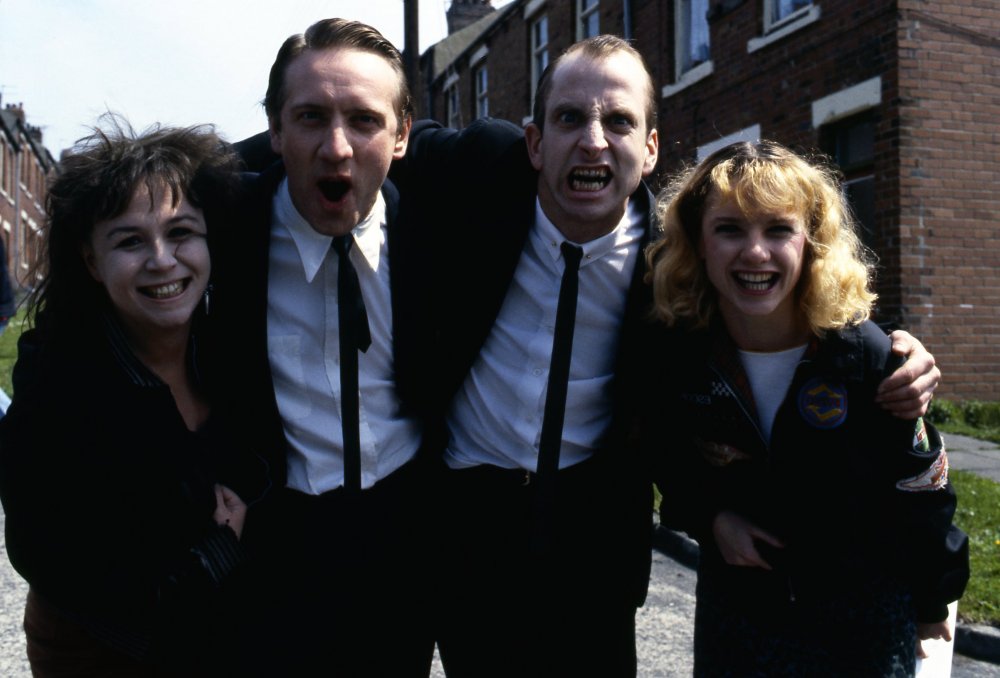 Alan Clarke’s Road aired as the 10th and concluding episode of the second season of Screenplay, a series of teleplays that the BBC commissioned between 1986 and 1993. Jim Cartwright had set his original play – which had been produced for the stage a year earlier – in his native Lancashire, but Clarke shot the hour-long adaptation in the abandoned, boarded-up terraces of Easington Colliery, County Durham.

Depicting the lives of the disparate and desperate (played by a truly excellent cast that includes Jane Horrocks, David Thewlis, Mossie Smith, Moya Brady and Lesley Sharp), Road is a bleak but somehow invigorating dispatch from the social margins, carved out in wide-angled Steadicam and a sustained sense of choreographed menace. Clarke’s film is a masterpiece for many reasons, not least of all its use of found locations – and is a far cry from that other film shot here 13 years later: Billy Elliot. 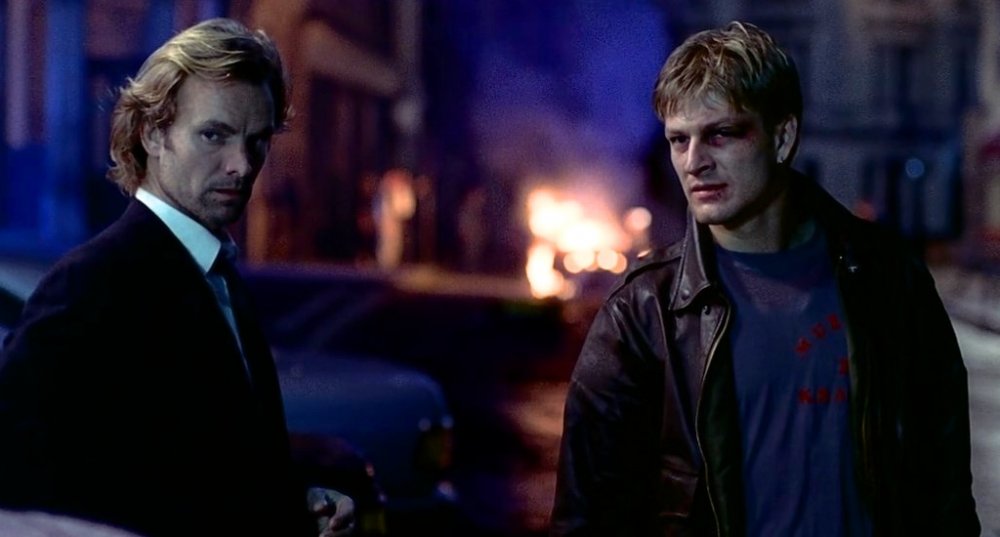 Beneath the railway viaduct that arches high and beautiful above Newcastle’s Dean Street – as seen in the opening sequence of Payroll – Sean Bean meets Melanie Griffith, and a deadly romance ensues. Bean is Brendan, the newly hired cleaner at a jazz club owned by Finney (local hero Sting), while Griffith is a waitress whose services as an escort have garnered the attention of Frank Cosmo (Tommy Lee Jones), a corrupt property developer who’s in town for a business convention called America Week.

For his stylish first feature – shot by Roger Deakins – Carlisle-born Mike Figgis turned to the Newcastle where he’d spent much of his childhood into a neon-lit, rain-sapped neo-noir. Both an ode to and snapshot of 1980s Tyneside, the film recalls the real-life political scandal involving T. Dan Smith, the former leader of Newcastle City Council (1960-65), who had been imprisoned in 1974 for accepting bribes, and who appeared in a docudrama about his own life, made by Amber in 1987. 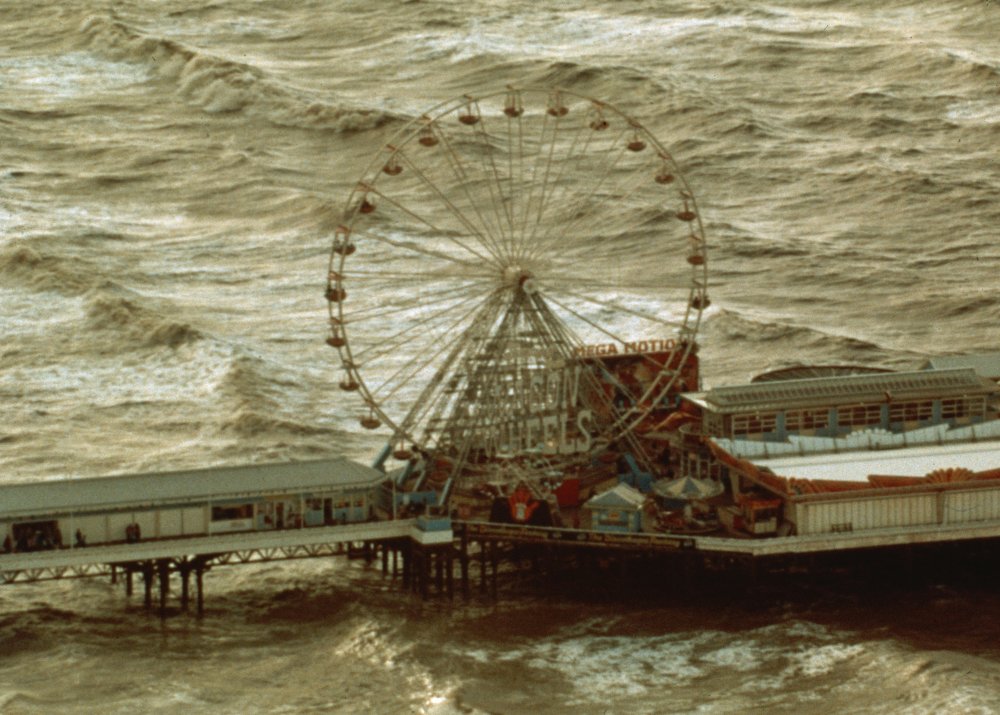 Patrick Keiller’s follow-up to his influential essay film, London (1994), featured once again Paul Scofield as the inimitably voiced narrator of a series of peripatetic studies undertaken by him and the unseen eponymous researcher. The quiet, educated heroes of the earlier film are this time recruited as spies and commissioned to examine “the problem of England”. Resembling Daniel Defoe’s Tour Through the Whole Island of Great Britain, their itinerary leads them in a northbound zigzag across the country – from Reading to Oxford, from Bristol to Hull, from Manchester and the West Midlands to North Yorkshire – where they encounter the new architectures of a shifting economy: shopping malls, supermarkets, roadside hotels, privatised prisons.

At the very end of what is arguably the best British film of its decade, the researchers arrive in Newcastle. Keiller, as if to anticipate the false promise and exhausted optimism of the incoming New Labour project, shifts into a more peacefully melancholic register. “I cannot tell you where he found his utopia,” the narrator says of Robinson – and, to the sound of the prelude from Powell and Pressburger’s A Matter of Life and Death (1946), we cut to a shot along the Tyne: the river, its bridges, a freight train, cars in the midst of passage. How better to frame impending uncertainties?