As we get ready to settle into the British Museum for our Monster Weekend, we stroll the corridors of film history to select 10 great museum movies. 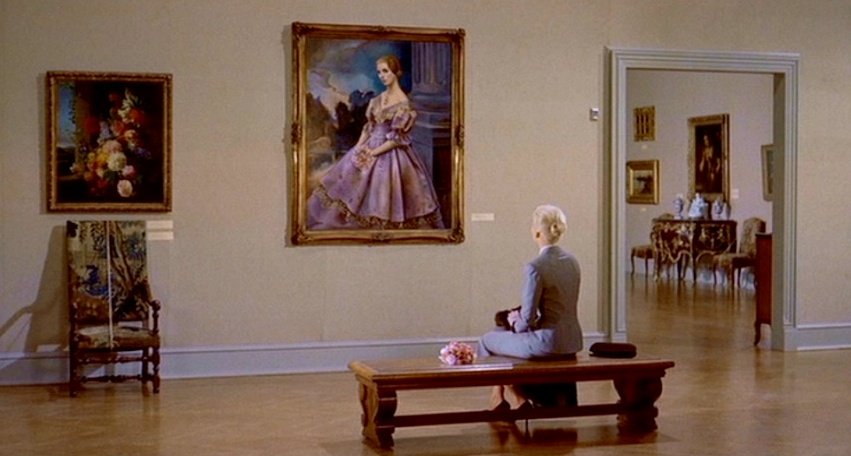 Raising the curtain on our four-month Gothic season, the Monster Weekend at the British Museum hosts screenings of three special vintage British horror films which will seem quite at home projected among the nocturnal shadows of the museum’s forecourt.

Bram Stoker frequented the museum’s reading room while researching Dracula, brought to ghoulish life in the 1958 Hammer horror. 1959’s The Mummy strikes a chord with anyone whose nightmares have been stoked by viewing the bandaged occupants of the museum’s Egyptology room. Jacques Tourneur’s unsettling 1957 supernatural drama Night of a Demon, meanwhile, has a key scene filmed in the reading room, where the American psychologist played by Dana Andrews begins his research into witchcraft.

Before Night of the Demon, the British Museum had already cropped up in silent mystery The Wakefield Case (1920), in Alfred Hitchcock’s Blackmail (1929) and in the 1935 thriller Bulldog Jack, which ends with a showdown in the Egyptian room. Later, it had small roles in The Ipcress File (1965) and The Day of the Jackal (1973), in Merchant-Ivory’s Maurice (1987) and, more recently, in The Mummy Returns (2001).

But if the British Museum has proved especially popular with makers of mystery thrillers, other great museums of the world have been the site of heist movies (How to Steal a Million, 1966), horror movies (The Relic, 1996) and even musicals (think of the classic musical number through the American Natural History Museum in On the Town, 1949). They are also places where cerebrally-minded filmmakers can ruminate on culture and history, and where grandstanding characters can flout their cultural knowhow.

In films […] museums provide a kind of harbour to people who are haunted, hiding or in transit: tourists searching for the commodified strangeness of the exotic; snobs, dandies and iconoclasts in-between high culture and mass culture; thieves and spies transgressing laws, secret lovers between moral codes and hedonistic pleasures; and characters haunted by mummies, wax figures or mesmerizing painted portraits between life and death.

Snobs, thieves, wax figures, tourists – they’re all here, jostling for space or a peek at some priceless artefact, in our list of 10 great museum movies. 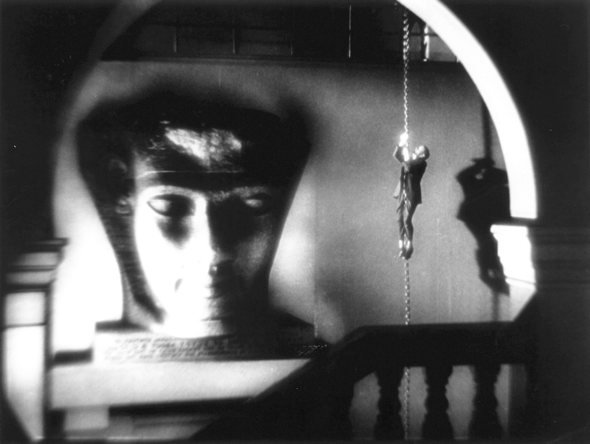 Alfred Hitchcock’s first sound film is also the first of his movies to contain a climactic set-piece at a famous landmark, anticipating the finale atop the Statue of Liberty of Saboteur (1942) and the chase down Mount Rushmore in North by Northwest (1959).

It’s the story of a grocer’s daughter, Alice White (Anny Ondra), who kills a man in self-defence and conceals the crime, only to find herself blackmailed by a low-life criminal. The drama comes to a head with a pursuit through the British Museum, including its round reading room (relocated in 1997) and its echoing exhibition spaces, before a nail-biting ascent up onto the domed roof of the library, with the cornered blackmailer shown in silhouette against the sky. In reality, it was too dark to film these sequences in the museum, so Hitchcock shot the action in a studio with transparencies as backdrops. Further Hitchcock museum scenes occur at Washington DC’s National Gallery in Strangers on a Train (1951), at San Francisco’s Palace of the Legion of Honor in Vertigo (1958) and at the Alte Nationalgalerie in Berlin for Torn Curtain (1966). 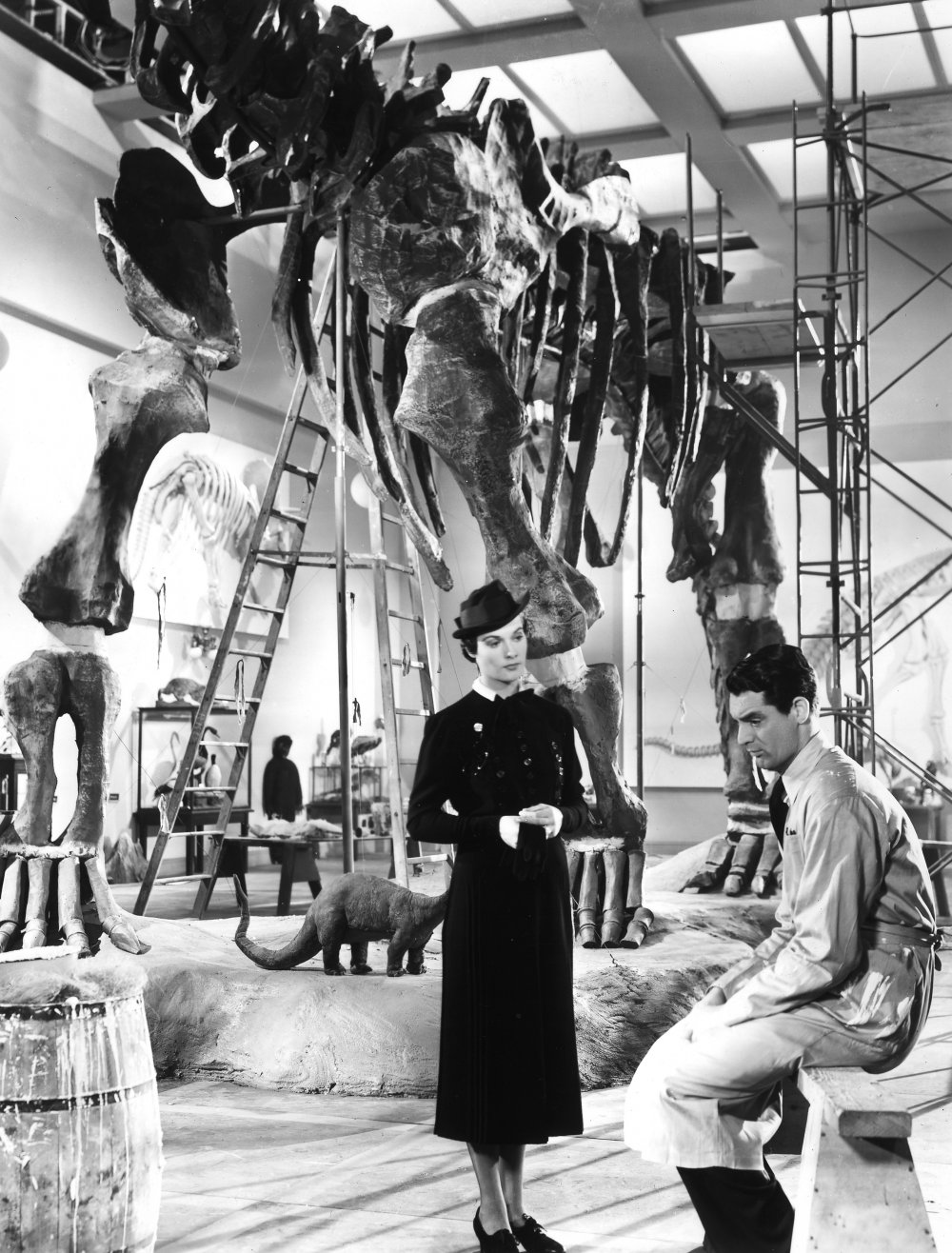 “There are only two things in the world I have to do,” exclaims palaeontologist David Huxley (Cary Grant), “finish my brontosaurus and get married at three o’clock!” The priority is in that order: the business of science and research first, the practicalities of wedlock later. With his thick-lensed specs and lab coat, Huxley is a paragon of scholarly dedication, labouring to finish constructing a dinosaur skeleton for his museum before getting hitched to his starchy fiancée.

But free-spirited heiress Susan Vance (Katharine Hepburn) comes crashing into his life to change all that, bringing the precarious orderliness of his life crashing down in the wake of an exasperating, whirlwind adventure upcountry in the company of her pet leopard Baby. Howard Hawks’s timeless screwball comedy is cinema’s great anti-museum manifesto, teaching us that sex and spontaneity are so much more fun than books and bones. 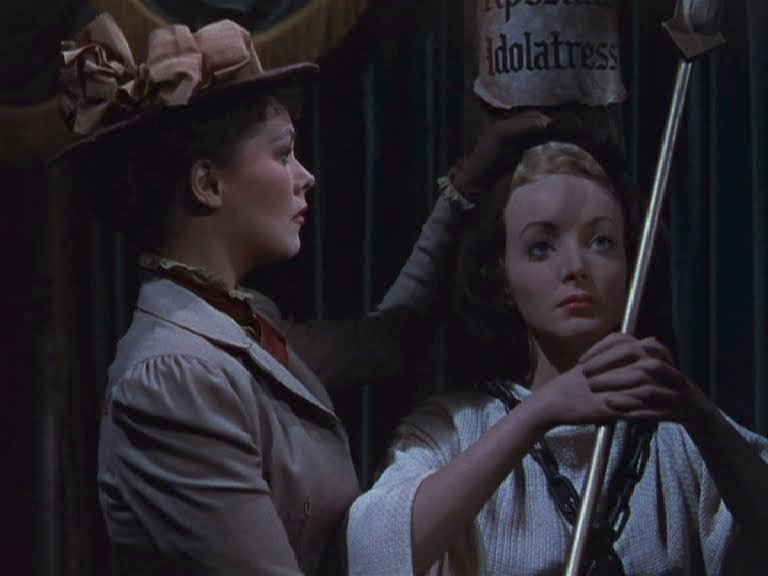 André de Toth’s House of Wax is a spooky highlight of the first wave of films made in 3D during the 1950s, as well as the film that catapulted Vincent Price – heretofore an urbane character actor – into stardom as one of the great horror movie icons.

Reimagining the 1933 horror film Mystery of the Wax Museum, the screenplay transposes the action from foggy 1920s London to turn-of-the-century New York. Price plays Professor Henry Jarrod, an expert wax sculptor who puts art and aesthetics first, refusing to stoop to the gory but commercially dynamite sensationalism of other waxwork museums. When his partner burns down their modest museum for the insurance money, Jarrod is left horribly scarred and sets out to wreak revenge. In his new museum, corpses of Jarrod’s murder victims are used for moulds, bringing the demented sculptor celebrity for his photo-realistic creations. Another film of the same name, with Paris Hilton but little story crossover, appeared in 2005. 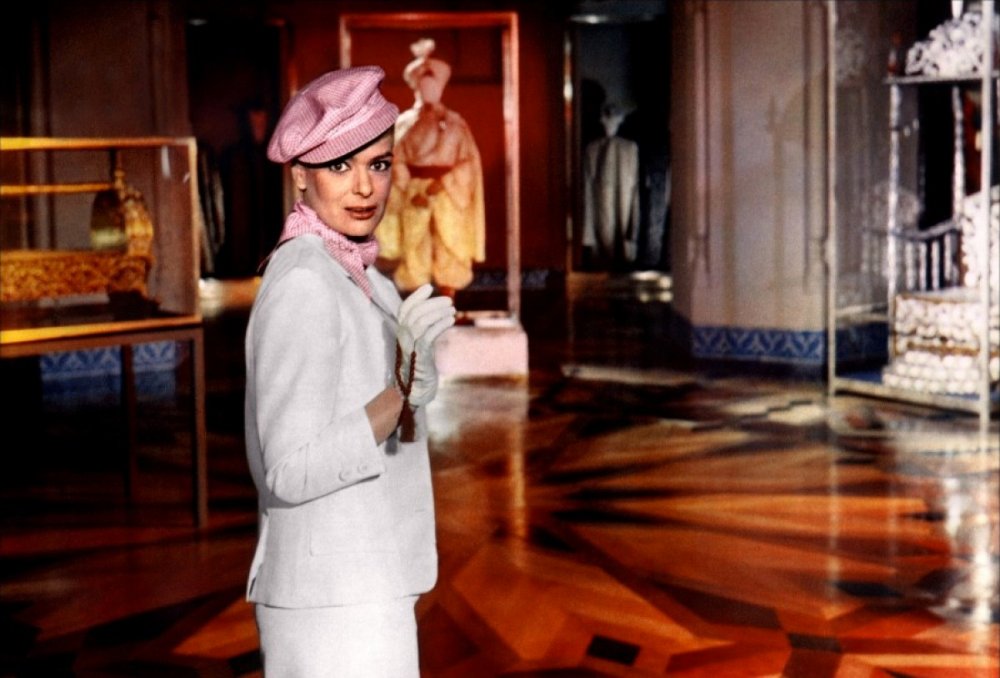 Director Jules Dassin had created one of the all-time classic heist movies with 1955’s Rififi, about a band of Parisian crooks breaking their way into a jewellery store. But in 1964, with a bigger budget and a starry cast, he set his sights on an even more glittering prize: the emerald-encrusted dagger of Sultan Mahmud I housed among the treasures of the Topkapi Palace museum in Istanbul.

Melina Mercouri stars as Elizabeth Lipp, who recruits a motley crew of ne’er-do-wells – criminal mastermind Walter Harper (Maximilian Schell), genius mechanic Cedric Page (Robert Morley), mute gymnast Giulio (Gilles Ségal) and two-bit hustler Arthur Simpson (Peter Ustinov) – to help with the break-in. Dassin enjoys a leisurely first half, taking in the exotic sights of Turkey and showing how the band is recruited, but a heist movie is only as good as its robbery sequence and Topkapi doesn’t disappoint: the raid by ropes and acrobatics defies belief even as it steals your breath. 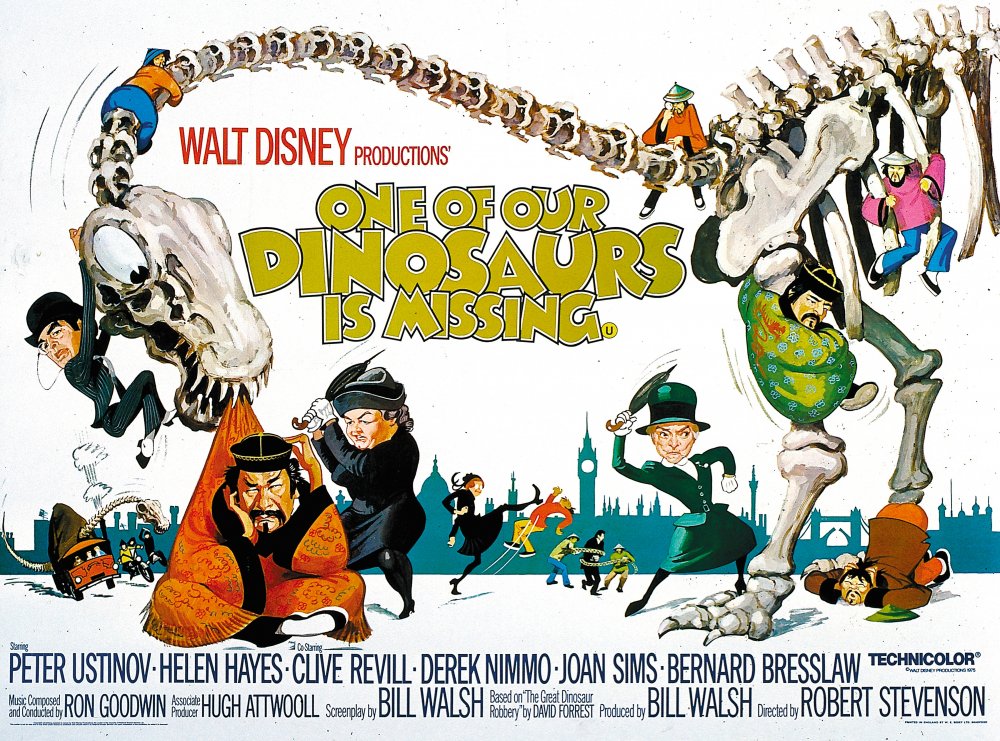 From In Search of the Castaways (1962) and Mary Poppins (1964) to The Love Bug (1968) and Bedknobs and Broomsticks (1971), British-born director Robert Stevenson had his fingerprints on some of the most purely entertaining of the live-action family films turned out by the Disney studio in the 1960s and 70s.

1975’s One of Our Dinosaurs Is Missing is a very silly, but almost wholly delightful period romp set in a fogbound London between the two wars. It’s about the attempt to regain a microfilm that businessman Lord Southmere (Derek Nimmo) has smuggled out of China, later concealing it in the bones of a dinosaur housed in the Natural History Museum. After Chinese spies led by Hnup Wan (Peter Ustinov) steal the dinosaur, an army of nannies – under the prim-and-proper yoke of Southmere’s former governess Hettie (Helen Hayes) – take pursuit, considering it their patriotic duty to retain the microfilm’s secret formula for king and country. While Ustinov and his cohorts’ relish in ‘Yellow Peril’ oriental stereotypes is squirm inducing, One of Our Dinosaurs Is Missing gets by on a witty script, an eye for atmospheric period detail, and an infectious flair for nonsense. 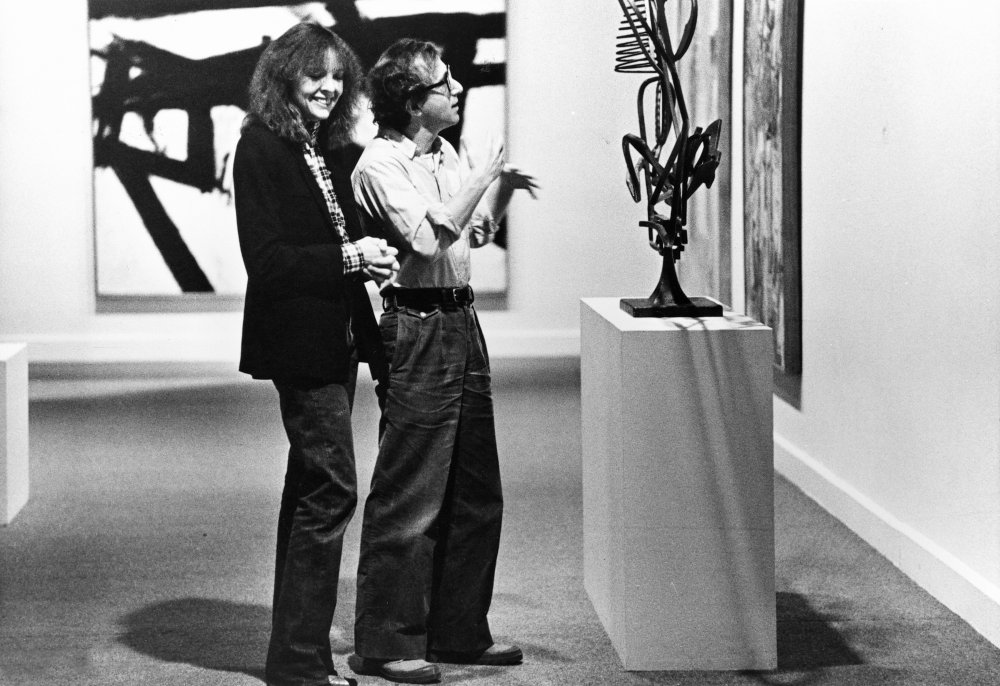 “The steel cube was brilliant?”, splutters Isaac Davis (Woody Allen), dumbfounded (he’d hated it). “Yes,” responds Mary Wilkes (Diane Keaton), who he’s just bumped into within the walls of New York’s Guggenheim Museum, “to me it was very textual, you know what I mean? It was perfectly integrated, and it had a marvellous kind of negative capability. The rest of the stuff downstairs was bullshit.”

Museums in the movies aren’t just places for daring robberies or reanimated mummies, they’re also spaces for characters to show off their cultural credentials, their high-falutin’ tastes and pretensions. Unsurprisingly, they feature heavily in the films of Woody Allen, particularly his 1979 masterpiece Manhattan, where Isaac bristles at the outspoken contrarianism of his best friend’s girlfriend, even as he slowly falls for her. Allen’s black-and-white love letter to New York also features scenes at the Met, the American Museum of Natural History, the Whitney Museum and the Museum of Modern Art – essential stop-offs for any Big Apple intellectual. 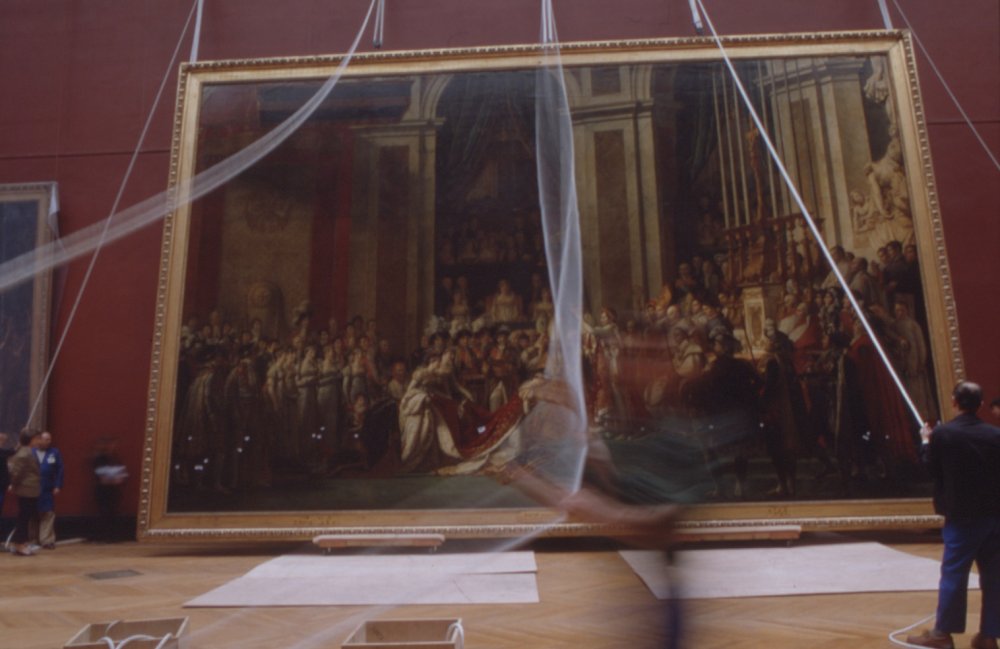 French documentarist Nicolas Philibert’s 1990 film La Ville Louvre is a look at work life inside the walls of the Musée de Louvre, one the world’s largest repositories of priceless art and antiquities. As the title suggests, the Louvre is like a city unto itself, a termite compound of bustling human activity, as conservationists, restorers, guards, carpenters and electricians all go about their business in the museum’s cavernous galleries and underground passageways.

Documenting the reorganising of the Louvre in the late 1980s, during the construction of the great glass pyramid in the forecourt, Philibert’s film is a poetic, entrancing and often mind-boggling account of the often monumental effort that goes on behind the scenes at such an institution. Philibert later turned his attention to Paris’s Museum of Natural History for his 1996 documentary Un animal, des animaux.

“This picture was in no way authorized, sponsored or endorsed by any museum,” read the end credits for this 1999 caper film, “nor was any portion of the motion picture filmed inside a museum.” Hardly surprising, since John McTiernan’s remake of the Steve McQueen/Faye Dunaway thriller from 1968 (which switches the central robbery from a bank to a museum) is surely one of the most gleeful doses of vicarious kleptomania on film.

Pierce Brosnan is the eponymous billionaire who, in one beat, bestows generous donations on New York’s Metropolitan Museum of Art (recreated on sound stages for the film), and, in another, is ingeniously pinching a priceless Monet from under the noses of the museum’s security. Crown’s sleek, impudent heist, syncopated to the slinky jazz of Nina Simone’s ‘Sinnerman’ on the soundtrack, makes you want to throw it all in and become a burglar. Add in René Russo as the wily insurance agent fixated on outsmarting Crown but finding herself far from immune to his charms, and you’ve got a rare remake with a life of its own. 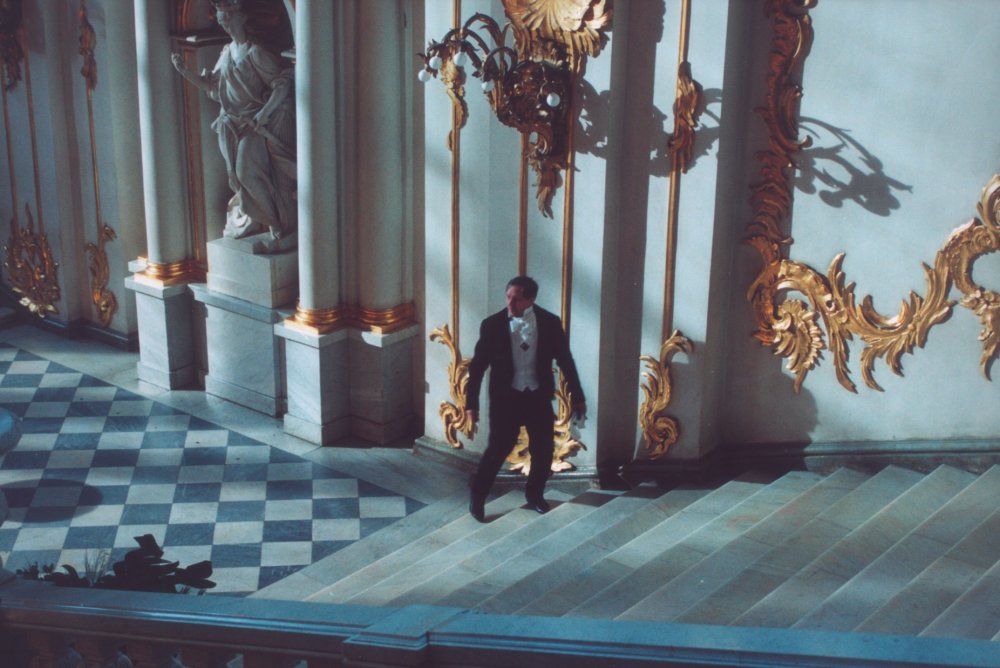 Filmed entirely with the grounds of the Russian State Hermitage Museum in St Petersburg, formerly the Winter Palace of the pre-revolutionary Tsars of Russia, Alexander Sokurov’s Russian Ark consists of only one shot – an astonishingly audacious, 96-minute Steadicam sequence that roams the galleries and corridors of the palace, even as it segues between past and present, reanimating ghosts of Russian history like Catherine the Great and Nicholas II as we are led through time and space by a mysterious guide (Sergei Dreiden), who ushers us this way and that, from one great artwork to another, and from one vast chamber to the next, culminating in an exhilarating ballroom set piece before the amassed throng descends a grand staircase back into the outside world and Sokurov brings us to a window overlooking the sea, leaving us to ponder the tides of time and memory together with the treasures of this fantastic museum, an ark carrying the legacy of history within its walls. 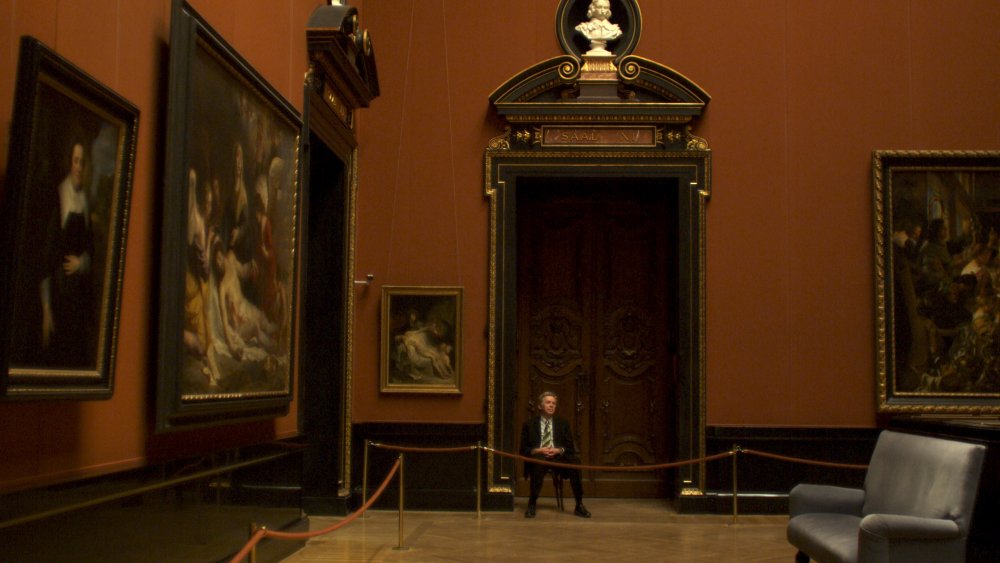 The story of a Canadian woman, Anne (Mary Margaret O’Hara), striking up a friendship with a museum guard, Johann (Bobby Sommer), at the Kunsthistorisches Museum in Vienna, Jem Cohen’s new film is a highly original blend of documentary observation and gently unfolding narrative. It’s part a Russian Ark-style odyssey through a museum’s art treasures, part a platonic counterpart to Richard Linklater’s Vienna-set conversation piece Before Sunrise (1995).

Roaming the museum, Johann has plenty of time to consider the masterworks that decorate the walls of his workplace, and his ruminations on a canvas by Brueghel (who radically shifted art’s focus away from sainted individuals to broader, essentially centreless scenes of life going on) inform Cohen’s own approach to filming. While fascinating for its art-historical insights, Cohen is just as interested in the present, with his camera forever seeking out the peripheral and incidental, in the museum as on the streets of a bustling capital.