Filmmakers have always been drawn to the era of courtly romance and bloodthirsty battles, of knights, princes, princesses and peasants. Here are 10 of the best movies set in medieval times. 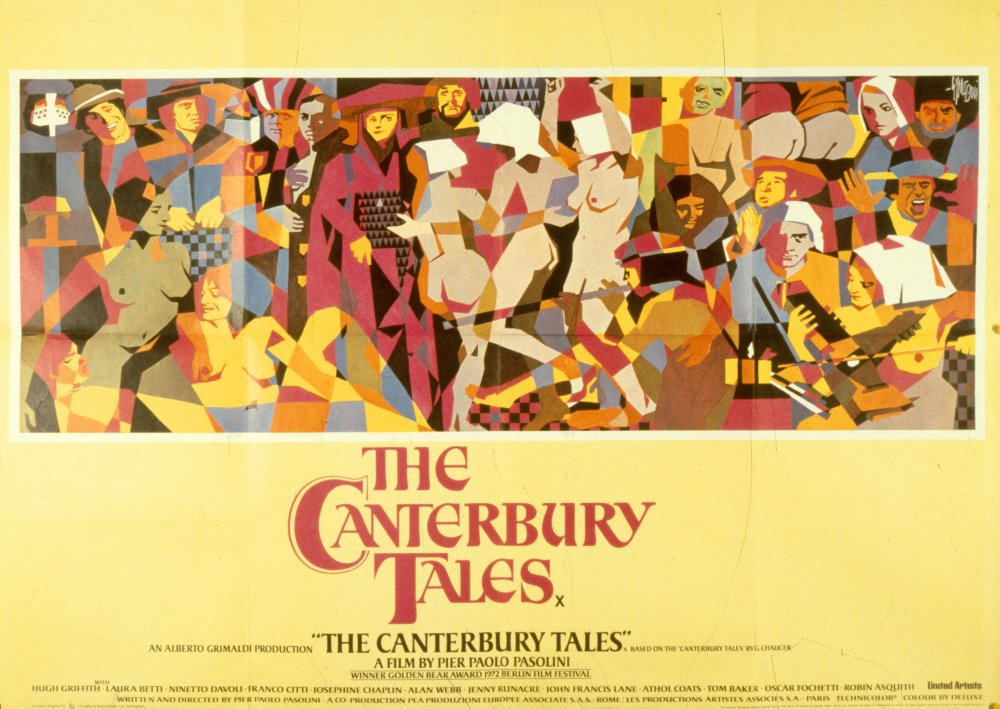 Though he started his career charting the misadventures of a pimp on the streets of modern Rome in Accattone (1961), Pier Paolo Pasolini would later make some of the most indelible of all cinematic excursions into times past.

He conjured the ancient world of Sophocles and Euripides for Oedipus Rex (1967) and Medea (1970), before turning to the middle ages for his luminescent ‘Trilogy of Life’: The Decameron (1970), The Canterbury Tales (1971) and Arabian Nights (1974), all now available as BFI Dual Format (DVD/Blu-ray) editions.

Drawing from the medieval story cycles of Boccaccio, Chaucer, and the 1001 Nights, Pasolini eschewed the stately grandeur of the costume epic in favour of an earthier, more direct style. With looming close-ups of the faces of non-professional actors, Pasolini stresses the continuities between our time and the past, with human beings laid plain in all our beauty and ugliness, our base desires charted alongside our passionate exuberance.

Without such directorial imagination, the middle ages on screen can be a stodgy affair, with actors looking embarrassed in brightly coloured tunics, and dialogue sounding as if it had first been inscribed in an illuminated manuscript.

What follows are 10 films (in approximate historical order) that have bucked the trend, firing the imagination with their evocation of those years between the fall of the Roman Empire and the Renaissance when feudal oppression, superstition and warfare later earned the era the name ‘Dark Ages’.

Though best known for his contemporary tales about the anguishes of modern love, director Eric Rohmer was always fascinated by the era of courtly romance and the later Renaissance. The philosophy of Pascal informs My Night with Maud (1969), just as Shakespeare’s tragi-comedy The Winter’s Tale underlies his 1992 A Winter’s Tale.

But he also made two full-costumed trips back to the early middle ages. Perceval le Gallois (1978) is a highly stylised treatment of Arthurian legend, while for his final film Rohmer turned to a 1607 pastoral fantasy by Honoré d’Urfé about a lovestruck shepherd. It’s set in a fifth-century Gaul populated by nymphs and druids, which situates Rohmer’s film just on the cusp of when the classical era was heading into the Dark Ages. Rohmer captures the light before the darkness, delivering an effervescent romance that’s lithe, funny and fresh as a meadow.

The Monty Python team’s trip back to the days of King Arthur revels in absurdities that spoof the lordly conventions of the period epic. This is the one with the dreaded Knights Who Say Ni, and the Legendary Black Beast of Aaaaarrrrrrggghhh; where the Knights of the Round Table ride around on imaginary horses, and in which four-limb dismemberment is brushed off by one brave-faced dueller as a “flesh wound”.

But the Pythons were canny enough to realise that such preposterousness would be funnier if it were grounded in a realistic depiction of medieval times, and directors Terry Jones and Terry Gilliam delight in putting the Dark Ages on screen in all their muddy, bloody glory.

One of the great directors of Hollywood’s Golden Age, Anthony Mann spent the 1940s making shadowy noir thrillers, the 1950s making psychology-tinged westerns, and – come the 1960s – expanded his scope into weighty historical epics. His star-studded 1964 film The Fall of the Roman Empire charted just that, the end of Roman rule across Europe and the invasions of the Barbarians which would send the continent hurtling into the Dark Ages.

Arguably his most satisfying epic though is his 1961 account of the Castilian knight and nobleman Don Rodrigo Díaz de Vivar, called ‘El Cid’, who led his countrymen in battle against Moorish invaders in 11th-century Spain. Charlton Heston stars as the legendary Spanish hero, with Sophia Loren as his beautiful bride Doña Jimena.

All but unknown to English-speaking audiences until released on DVD in the UK a couple of years ago, this Czech saga comes with a reputation as one of world cinema’s best kept secrets. Voted the greatest Czech film ever made by a poll of the country’s critics, Frantisek Vlácil’s magnum opus has since taken its rightful place alongside Andrei Tarkovsky’s Andrei Rublev (1966) among cinema’s most boldly envisioned tapestries of medieval life.

The story of the daughter of a feudal lord who is captured by a rival clan, Marketa Lazarová unfolds with hallucinatory force, the sights, sounds and atmosphere of 13th-century Europe all but intoxicating. Sight & Sound magazine called it “the most convincing film about the middle ages made anywhere”, though Vlácil’s follow-up The Valley of the Bees (1967), also shot in resplendent black and white, might fancy a joust for that title.

As a star in other people’s films, Mel Gibson’s medieval credentials are limited to an outing as the titular Prince of Denmark in Franco Zeffirelli’s 1990 version of Hamlet. But since he turned to directing, it’s clear that the Australian actor is drawn to times long past. For 2004’s The Passion of the Christ, he returned to the Biblical era for a gory retelling of Jesus’s journey to the cross, following it in 2006 with Apocalypto, an action-adventure film set in the ancient world of the Mayans.

His 1995 blockbuster Braveheart is the story of the 13th-century Scottish warrior William Wallace, who led Scots in battle against the tyranny of King Edward I of England during the First War of Scottish Independence. Inspired by the 15th-century poem The Acts and Deeds of Sir William Wallace, Knight of Elderslie by one Blind Harry, Gibson’s stirring epic met with slings and arrows of critical abuse for its historical inaccuracies – but nothing to stop Braveheart winning the Oscar for best picture and lighting a fire under Scottish tourism.

Ingmar Bergman is another arthouse auteur who is best known for his modern-day dramas, seeking to map the human psyche in a contemporary world defined by spiritual uncertainty. But perhaps his most famous film traces similar themes in a plague-ravaged Sweden of the 14th century, an epoch marinated in superstition and religious dread. Max von Sydow plays a knight returned from the Crusades who strives to fend off his inevitable doom by challenging Death (Bengt Ekerot) to an ongoing game of chess.

Bergman’s atmospheric allegory abounds with apocalyptic imagery, from a black bird on the wing against stormy skies to the final, silhouetted danse macabre on a hilltop. Historians have pointed out that self-flagellation and witch hunts were not phenomena in Sweden until the 15th century, but a little anachronism is a small price to pay for the marrow-chilling moment in which a procession of woebegotten pilgrims appears in town, whipping themselves raw in desperate penitence.

Or, to give it its full onscreen title, The Cronicle History of King Henry the Fift with His Battell Fought at Agincourt in France. Shakespeare adaptations have, of course, furnished the screen with a motherlode of middle ages movies, but few burn as brightly as Laurence Olivier’s 1944 directorial debut.

Beginning as a performance of the bard’s history play on stage at The Globe Theatre, Olivier’s film quickly bursts free of its theatrical straitjacket to become a ravishing Technicolor pageant, as confident in its battle scenes at Agincourt as in moments of courtly flirtation between the English king (Olivier) and French princess (Renée Asherson). “The brightest heaven of invention” indeed.

Andrei Tarkovsky’s second feature was a monumentally ambitious attempt to create a grand fresco of life in 15th-century Russia. It’s centred around the eponymous icon painter (played by Anatoly Solonitsyn), who wanders through a landscape ravaged by Mongol invaders, experiencing an acute crisis of faith as he’s confronted with savagery and hopelessness.

Once seen, Andrei Rublev’s set pieces are rarely forgotten: the opening hot air balloon ride off the roof of a church; the firing of the furnaces for the casting of a giant bell; and the climactic moment when Tarkovsky’s black and white film bursts into colour for a montage of Rublev’s greatest paintings.

Directors including Luc Besson, Robert Bresson and Jacques Rivette have all had a go at depicting the life of Joan of Arc, the French heroine who led her countrymen in battle against the English during the Hundred Years’ War (1337-1453) before being burnt at the stake for heresy at the age of 19. The definitive version, however, remains Carl Theodor Dreyer’s 1928 silent film, which focuses on St Joan’s final days, her trial and execution.

Featuring a luminous performance by Falconetti, which Dreyer shoots in tight close-ups that capture each flicker of hope, resolve and desperation across the actress’s face, The Passion of Joan of Arc is a supreme example of the refined visual style of late 1920s silent filmmaking. Though its recreation of the middle ages is modest by comparison with recent big-budget medievalist epics, it was always Dreyer’s genius to show more with less, and the intensity of Joan’s trial is conveyed with extraordinary immediacy.

Some of the finest period films charting the feudal age have come from Japan. Kenji Mizoguchi’s run of early 1950s tragedies, including Ugetsu Monogatari (1953) and Sansho Dayu (1954), take place in a world of imperial power and warring clans, fine arts and brutal violence, and his countryman Akira Kurosawa also made his most famous work in the jidaigeki (costume film) form. Rashomon (1950), Seven Samurai (1954) and Yojimbo (1961) each riff on the mythology of the samurai for hire, while Throne of Blood (1957) transposes Shakespeare’s Macbeth to Japan in the 1500s.

His late masterpiece Ran repeated the trick, taking King Lear as its basis to tell the elegiac story of an ageing warlord in the Sengoku period (1467–1573) whose decision to abdicate power in favour of his three sons results in tragedy. Even without Shakespeare’s words, critics agreed that this elemental, beautifully mounted epic deserves a place around the grand table of cinematic bard adaptations. Writing in Time Out magazine, Chris Peachment called Ran, “A Lear for our age, and for all time.”