Lights! Camera! Action! These are 10 timeless movies about movies that came before the Coen Brothers’ latest, Hollywood-set comedy Hail, Caesar! 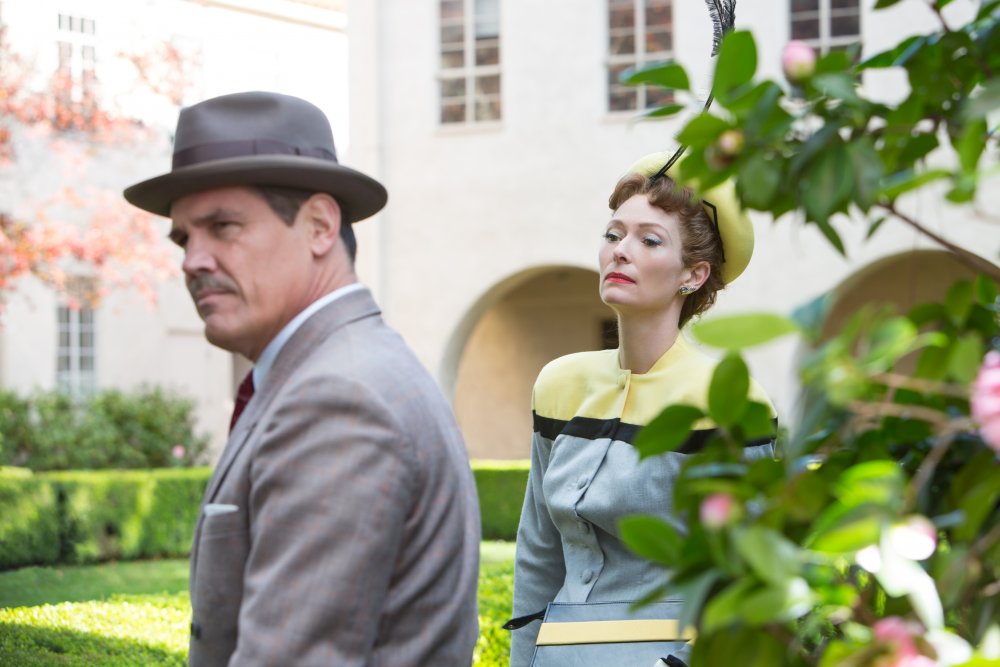 Hail, Caesar! is in cinemas from 4 March.

The film touches on the glossy ‘Hollywood on the Tiber’ era, when international film stars flocked to Rome to make big-budget epics in the Cinecittà studio facilities. The Coens are well-travelled, but usually within American borders; they’ve taken us from Depression-era Mississippi in O Brother, Where Art Thou? (2000) to Greenwich Village in the 60s in Inside Llewyn Davis (2014), with all manner of in-jokes and references wedged in between. Conjuring an era when Biblical epics, two-bit westerns and deliriously camp musicals vied for space on the studio backlot, Hail, Caesar! is full of movie-geek winks and nudges and best rewards audiences who come in with prior knowledge and a cine-literate approach.

Maybe that’s the ideal spirit to adopt when talking about movies set in the so-called dream factory, as the town is steeped in legend and death, scandal and shimmering decadence. Knowing some of the real-life secrets and inner workings can’t help but to heighten the experience of watching Hollywood play itself; it’s like you’re in on the gossip. Self-regarding to the last, here are 10 tantalising movies where Hollywood does what it does best: revel in its own image. 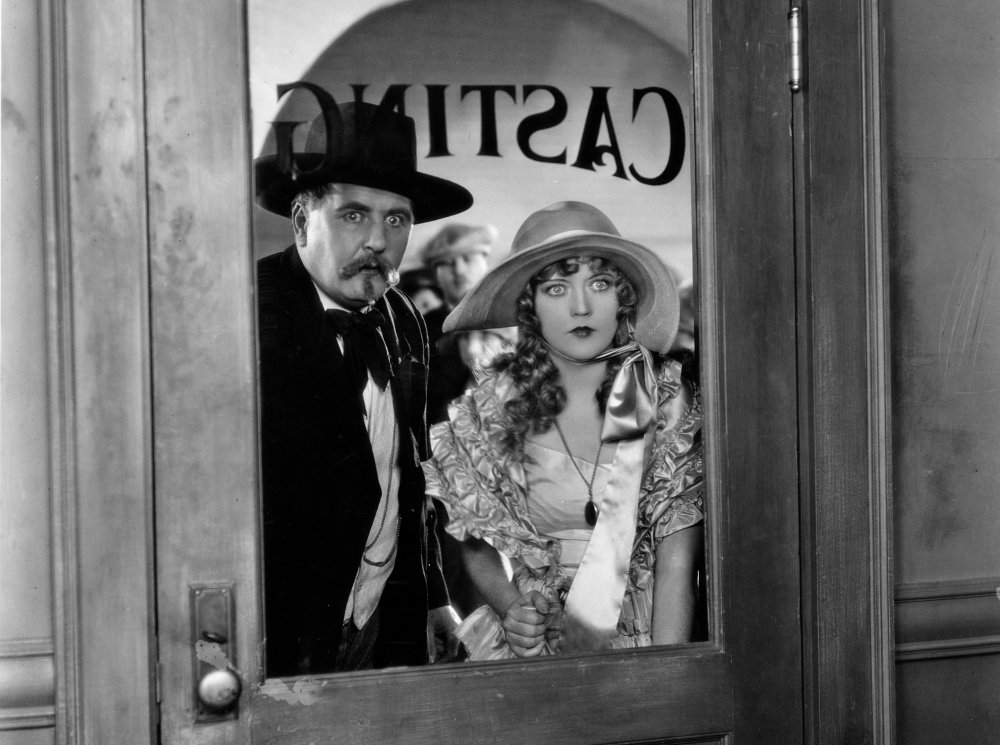 This film is evidence that the studio industry has been self-obsessed since its earliest conception; Show People is an inside-the-backlot comedy released when Metro-Goldwyn-Mayer was a mere five years old. King Vidor’s lighthearted silent satire is as much historical document as anything, capturing a time now ossified in nostalgia more than memory. The film features cameos from a huge roster of stars: Charlie Chaplin, Douglas Fairbanks, Norma Talmadge, John Gilbert, and dozens more. It stars comedienne Marion Davies as Polly Pepper, a girl from the sticks who makes it big and lets her ego run away with her; some whispered that the whole characterisation was a jab at the conceited Gloria Swanson, who like Polly, made her start in two-reel Mack Sennett comedies.

Many of the central names in the cast are dimly remembered now, giving ample evidence that the meteoric rise of the silent star was a precarious one. Knowing that so many of these careers were cut short, Vidor’s film serves as a rare behind-the-scenes record of those talents in their heyday. 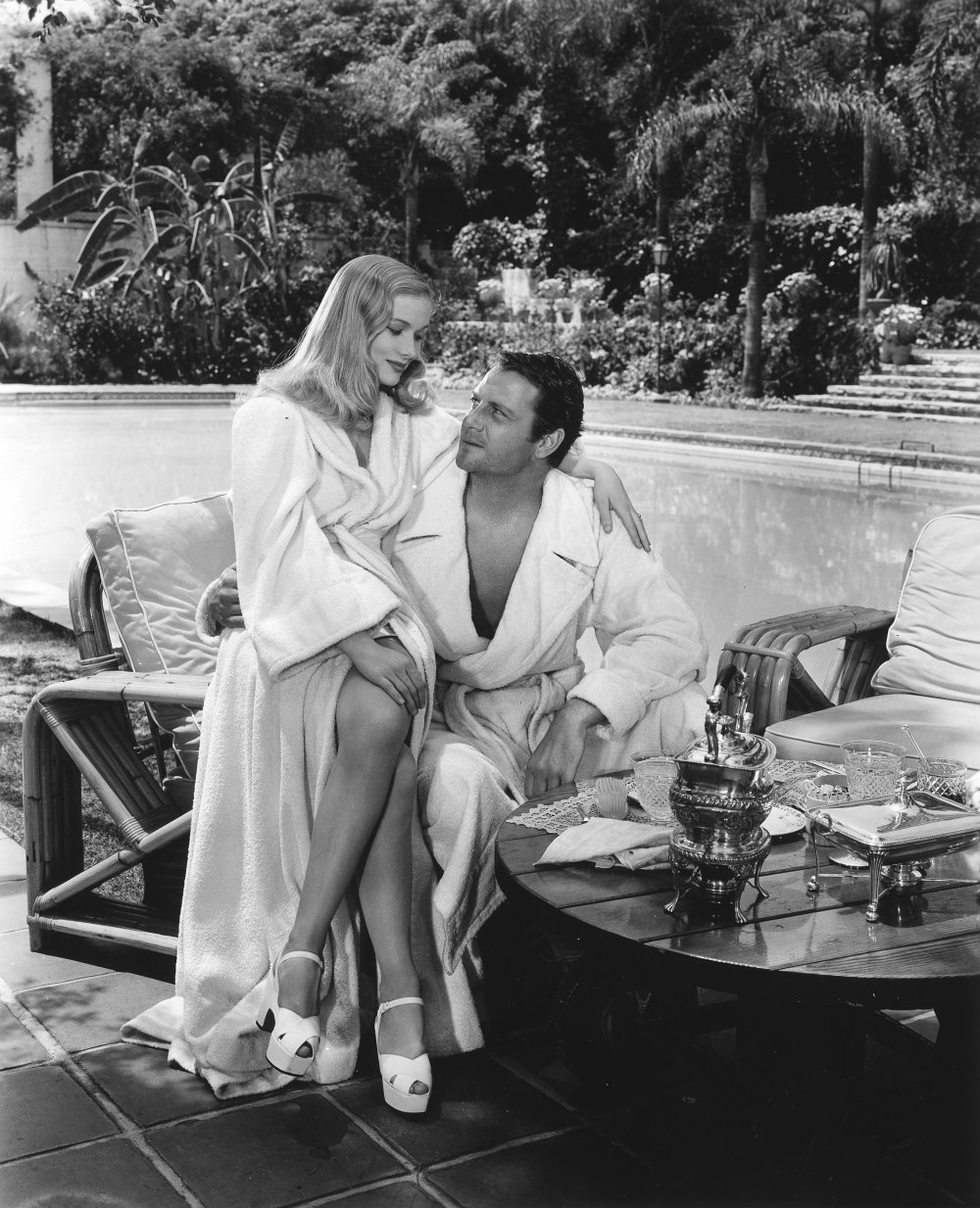 Preston Sturges wastes no time at the opening of his piquant screwball comedy, plunging us mid-conversation into the office of studio moneymen. They’re being cajoled by an ardent, effusive Joel McCrea (as Sullivan himself), a hotshot comedy film director desperate to make his new film a serious social statement. There’s no real interest, so Sullivan decides to hit the road and live as a hobo, hoping to gain real-life experience for his salt-of-the-earth masterpiece-in-the-making.

Sincere though he is, Sully finally realises that the poor and downtrodden want nothing more than motion pictures to make them laugh. In a remarkable climactic scene, he witnesses a chain gang doubled over in laughter at a Mickey Mouse cartoon. Sturges’ lesson is that Hollywood should soothe the troubles of the working man rather than make commentary on them – the irony, of course, is that the director was sly enough to do a little bit of both. 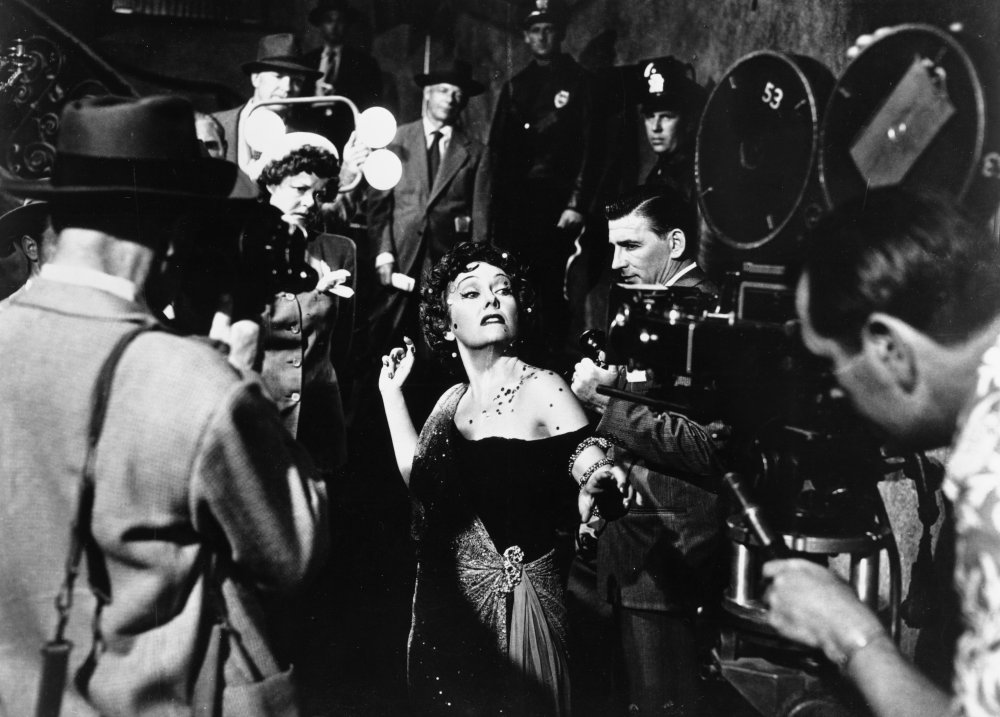 Billy Wilder’s morbid film noir is set against the sickly sweet greenery of Beverly Hills and the nocturnal glow of Schwab’s Pharmacy. With William Holden’s laconic voiceover helping to set the scene, it evokes the Lost Angeles mythos better than nearly any other film. Wilder infuses the story of faded silent-era goddess Norma Desmond with gothic flourishes and references to the storied past; Sunset Blvd might even be an early foray into postmodern cinema, with its casting of Gloria Swanson as a thinly-veiled version of herself and cameos from the likes of Buster Keaton and Hedda Hopper.

An apocryphal story goes that MGM honcho Louis B. Mayer flew into a rage on seeing the film’s depiction of his then-decaying empire. Mayer, ever the diplomat, told Mr Wilder: “You should be thrown out of the country tarred and feathered, you goddamn foreigner son of a bitch!” 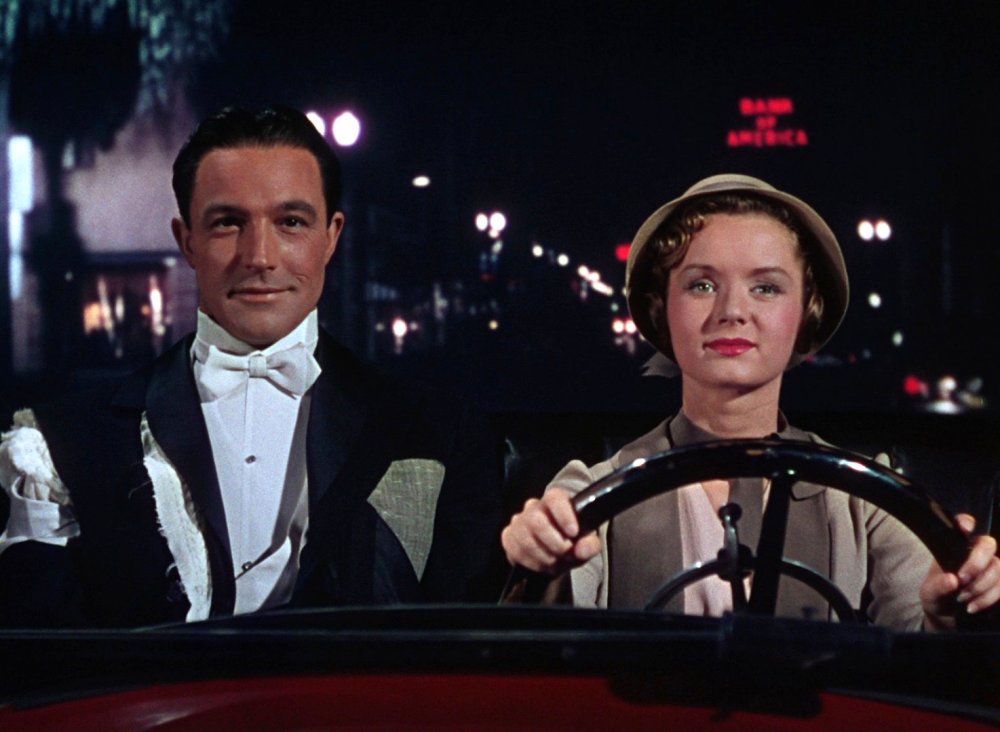 To be biased for a moment: is there a film that’s ever been so close to perfection? Certainly there isn’t another that bestows happiness on its viewers in quite the same way. This apotheosis of MGM artistry, with the well-oiled machine of Arthur Freed’s production unit behind it, was actually a rather hurried affair. The songs (written by duo Nacio Herb Brown and Betty Comden) were largely thrown together from earlier, lesser projects.

The narrative centres around silent matinee idol Don Lockwood (Gene Kelly) and his tough transition into the talkies. Charting the difficulties of early sound recording, diction coaches, and changing styles of acting, Singin’ in the Rain has considerable fidelity to its industry-shaking moment – but it’s also a joyful exercise in sunny escapism. When Don wants to confess his love for Kathy (Debbie Reynolds), he admits that he’s too much of a ham to just come out and say it; he needs to go out on the soundstage, turn up the klieg lights, and cast everything in a soft lavender glow. There was never a more fitting nod to the industry’s yearning for starry-eyed romance. 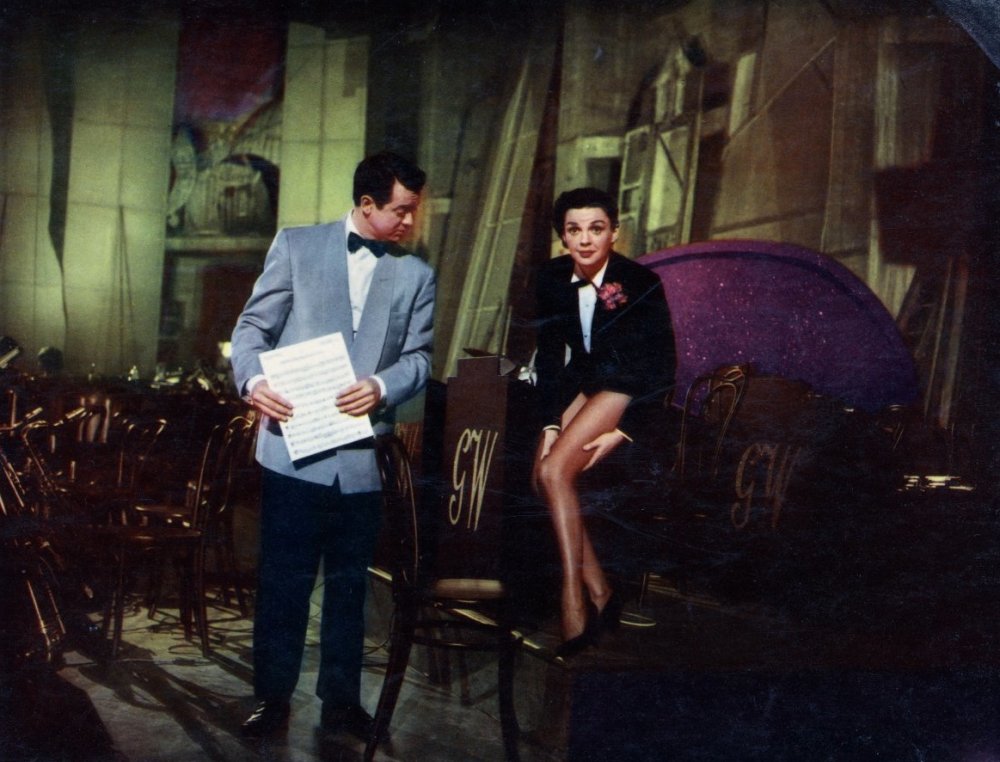 George Cukor’s musical A Star Is Born is based on a ‘Hollywood on Hollywood’ story with so many iterations that it may as well be written in Los Angeles’ DNA. It started with Cukor’s 1932 film What Price Hollywood?, which was then remade by William A. Wellman as A Star Is Born in 1937, featuring Janet Gaynor and Fredric March in the leading roles.

But the bright Technicolor, zippy musical numbers, and faint artificiality of mid-century studio sets somehow give something to Cukor’s own later remake – not to mention the heart-wrenching Judy Garland performance, aware as we are of her own self-destructive relationship to stardom. James Mason must be one of the most tragic alcoholics in all movie history, with an unforgettably creased, melancholy demeanour. He’s the wise, fading screen idol to Garland’s up-and-coming musical star, a triple-threat who’s moulded by the studio publicity system into a well-spoken and perfectly groomed model of American wholesomeness. That sounds awfully similar to what happened to Garland in her own adolescent days at the MGM star stable, making the film a poignant reminder of the sometimes tragic merry-go-round of Hollywood fame. 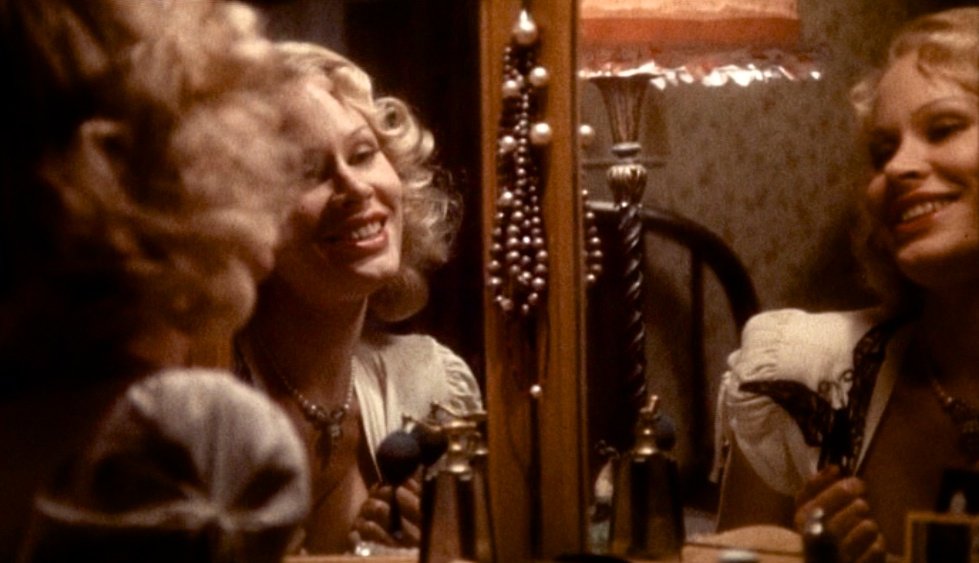 Based on Nathanael West’s 1939 novel of the same name, The Day of the Locust is an oft-forgotten entry into 1970s filmmaking obsessed by the past. Starring William Atherton, Karen Black and Donald Sutherland, it’s a bizarre, panoramic exploration of show business folly. Based on a series of vignettes about an aspiring starlet and the men in her life, the film engages with the hangers-on and failures drawn to Los Angeles and soon ejected by it. Surreal and at times violent, it dances through elliptical imagery – offering a fierce critique of national blindness in the face of Hollywood’s false glamour. 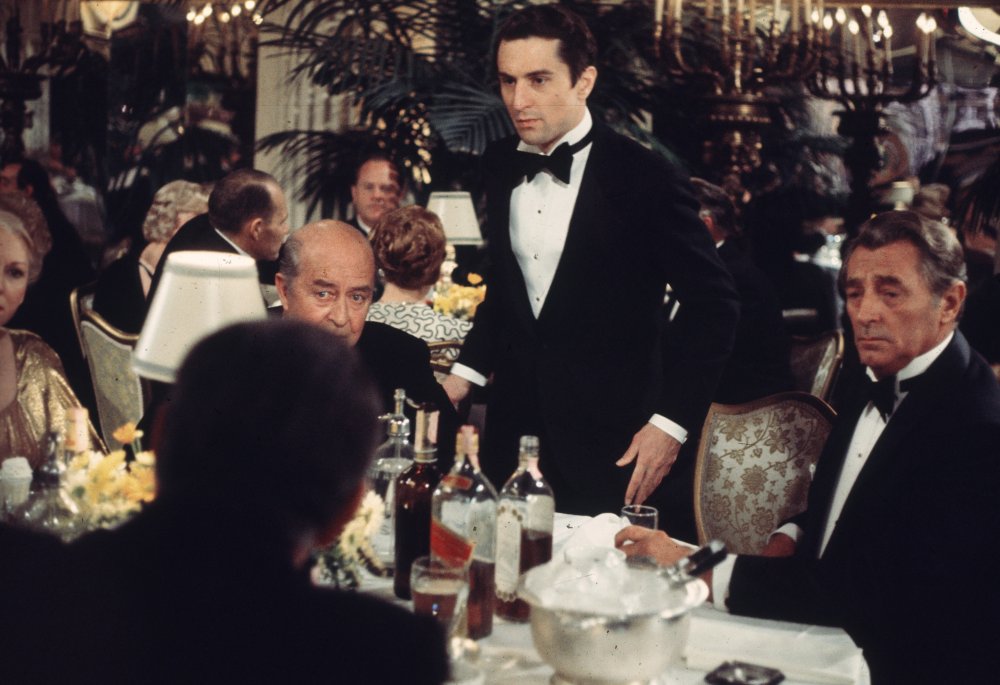 This unloved film from a late-career Elia Kazan is about a young movie producer making his way up the ladder in the foundational years of the industry. Robert De Niro is Monroe Stahr, a fictionalised version of MGM’s own ‘boy genius’ Irving Thalberg. Adapted from F. Scott Fitzgerald’s unfinished final novel, the resultant film is understated and solemn in tone, following Monroe as he hustles his way into the studio system, juggling difficult stars and bosses while maintaining his role as production chief. De Niro gives a coolly restrained performance, recalling Thalberg’s much-discussed quiet charm and willpower. As he politely tells a union organiser played by Jack Nicholson: “I don’t think I have more brains than my writers – I just think that their brains belong to me.”

It’s a film that offers a distinctive and rather romantic look into the mindset of the industry’s earliest moguls, but also one that is itself telling about the unpredictability of film production. The amount of creative talent on The Last Tycoon is staggering, from a screenplay by Harold Pinter to a stellar cast. But what seemed like a producer’s dream was a critical and commercial flop – defying the expectations of its own most wily and seasoned of producers, Sam Spiegel. 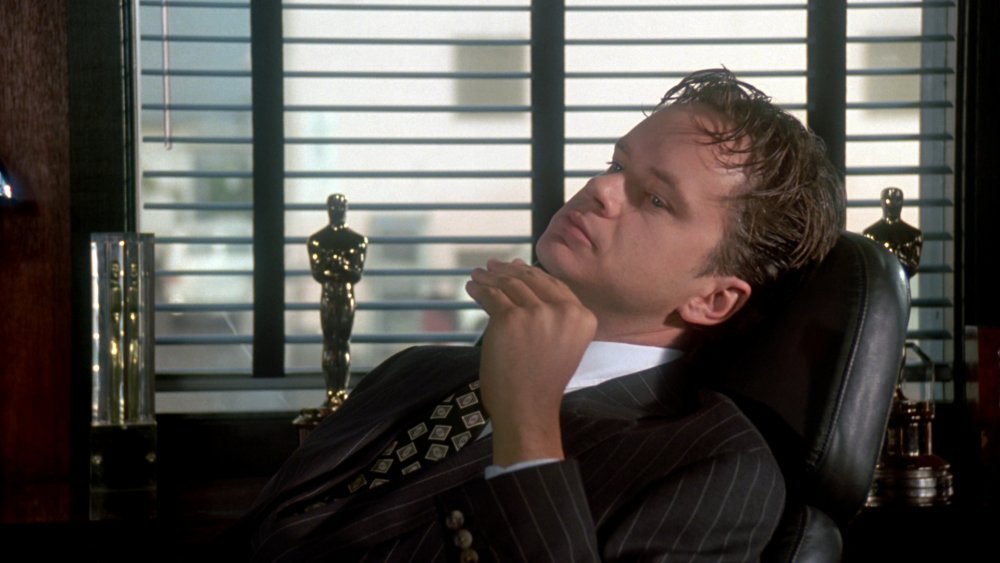 Robert Altman opens his acidic story of a slick Hollywood studio boss (played by Tim Robbins) with a seven-minute crane shot worthy of Orson Welles; rightfully, since it’s a clear homage to the opening moments of Welles’ Touch of Evil (1958). Altman is more than usually barbed in this ironic takedown of a man who murders a screenwriter and gets away with it – eventually allowing the experience to be spun into a film pitch.

Robbins is in top-tier scumbag form, and is supported by a veritable feast of celebrity cameos, including everyone from Burt Reynolds to Julia Roberts. The director seems to trade general world-weariness for targeted bitterness here, perhaps reflecting his own struggles with the studio system throughout the 1970s. But crucially, he never forgets to laugh at the absurdity of it all. 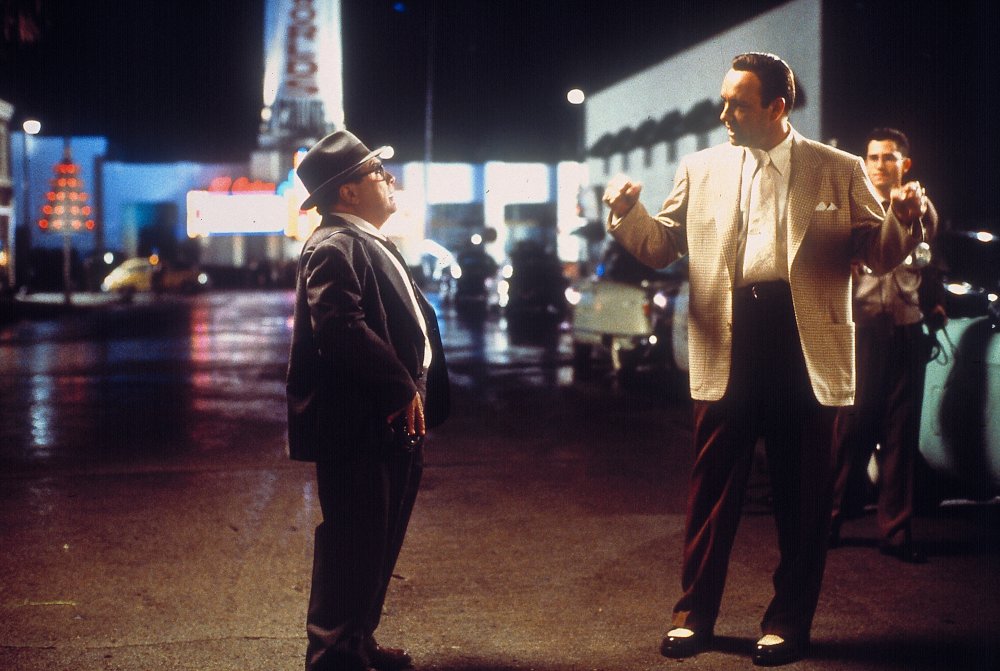 This sparkling adaptation of James Ellroy’s novel touches on countless pieces of old Tinseltown lore: the Robert Mitchum marijuana bust, a supposed brothel of Veronica Lake lookalikes, and a notorious level of LAPD collusion with studio bosses and mobsters.

It’s played with perfect understatement by Guy Pearce, Russell Crowe and Kim Basinger; looking to avoid stale mimicry, director Curtis Hanson asked the cast to study a host of films starring Sterling Hayden and Humphrey Bogart. The aim was for the actors to inhabit the physicality and mood of those films rather than to blindly copycat. L.A. Confidential’s genius is that it should be camp, but it dispenses with overt self-awareness, achieving a level of genuine suspense. 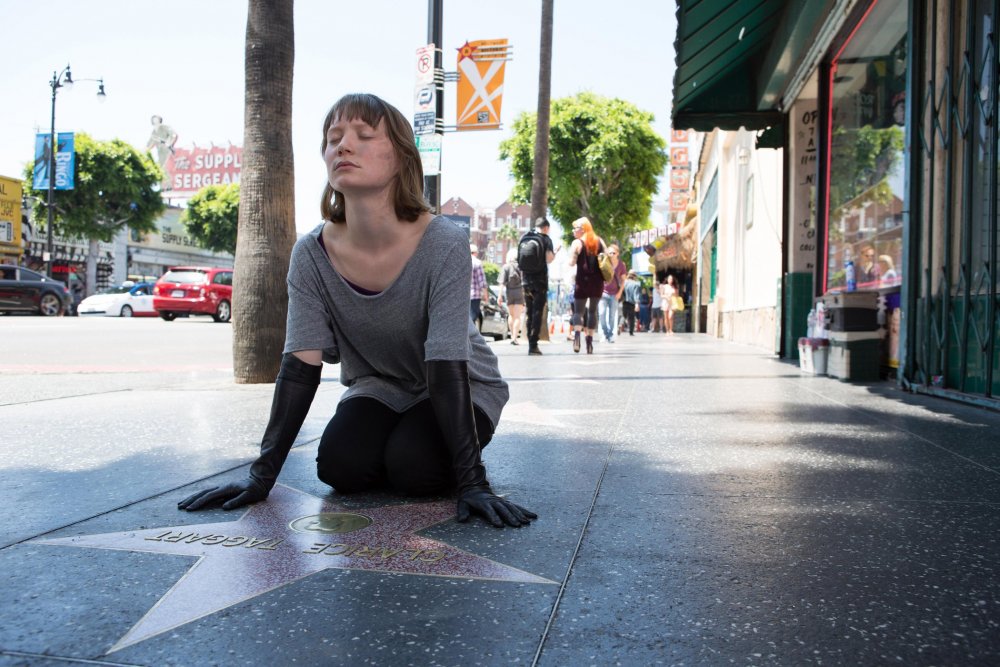 There’s absolutely zero romance here – Benjie (Evan Bird) is a Bieber-esque child star with a remorselessly false mask and a towering ego; his father a hokey spiritual guru (John Cusack). One of his father’s clients is an A-list diva who is as emotionally fragile as she is psychotic, played with divine exaggeration by Julianne Moore. Everything in Maps to the Stars is baroque and ramped up; it probably shouldn’t work, but its unchecked hysteria is so much fun.