From Trainspotting to The Prime of Miss Jean Brodie: a selection of some of the best movies set in the Scottish capital. 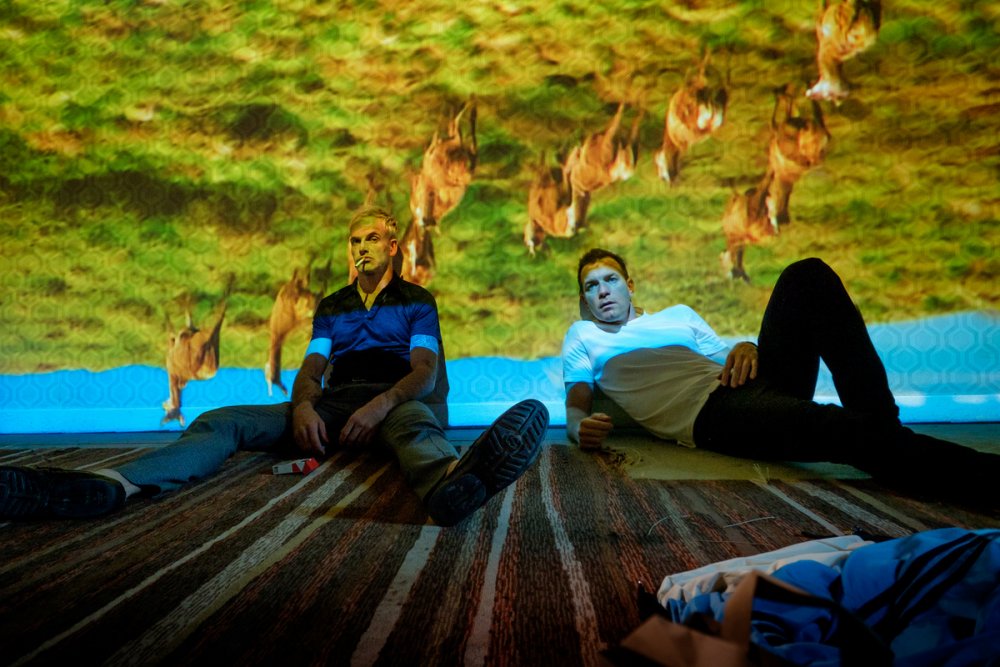 It hasn’t received quite the level of cinematic attention that’s been afforded to Scotland’s largest city – Glasgow, which has lately served as the backdrop for a number of blockbuster franchises, including the Fast & Furious and Dark Knight series – but Edinburgh has nonetheless attracted several notable filmmakers over the years. These include Ken Loach, who took in such views as Edinburgh Castle for his 2012 caper comedy The Angels’ Share, and the Wachowski sisters, who filmed throughout the city for their 2012 sci-fi epic Cloud Atlas.

Perhaps most notable of all, though, is Danny Boyle, whose 12th feature is his third set in Edinburgh. T2 Trainspotting, which was filmed in various locations around the city, including Arthur’s Seat, is the sequel to one of the most culturally significant British movies of modern times – a film that also paved the way for a number movies made in and about the Scottish capital.

Before Trainspotting (1996), Edinburgh was under-represented on film, popping up from time to time in nostalgic evocations of the historical city in pictures such as Mary of Scotland (1936), Journey to the Center of the Earth (1959) and Greyfriars Bobby (1961). Post-Trainspotting, Edinburgh has become more of a staple of British cinema, the setting for wartime dramas (like Gillies MacKinnon’s Regeneration, 1997), horror-comedies (John Landis’s Burke & Hare, 2010), social realist drama (16 Years of Alcohol, 2003) and period romances (Lone Scherfig’s One Day, 2011). Looking to both this century and the last, here are 10 of the best movies to be made about Edinburgh. 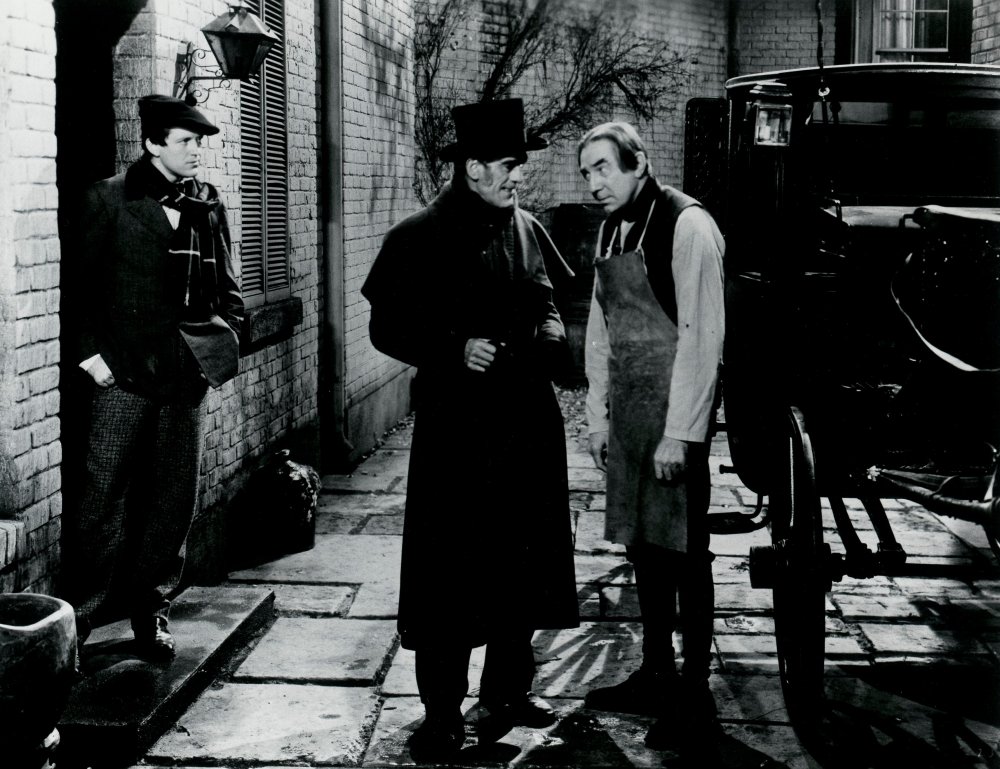 There’s nary a Scottish accent to be heard in Robert Wise’s 19th-century, Burke and Hare-inspired horror, The Body Snatcher, adapted by Val Lewton from a Robert Louis Stevenson short story. California lots and an all-Hollywood cast (including horror legends Boris Karloff and Bela Lugosi, here making their last screen appearance together) stand in for the Scottish capital. It’s not the most authentic Edinburgh movie, then, but The Body Snatcher is still atmospherically built on the foundation of the city’s grisliest legend.

Boris Karloff plays the cabman with a side venture in procuring bodies, while Henry Daniell is the doctor reluctantly buying what he sells. Wise does an impressive job presenting Edinburgh as all oppressive shadow and eerily quiet spaces, but Karloff is the main draw. Having recently left Frankenstein’s Monster behind, he gives an exceptionally odious performance as a man who appears to relish the disgust others feel for him. The Body Snatcher is one of the highlights of the cycle of 1940s horror movies that producer Val Lewton made for RKO. 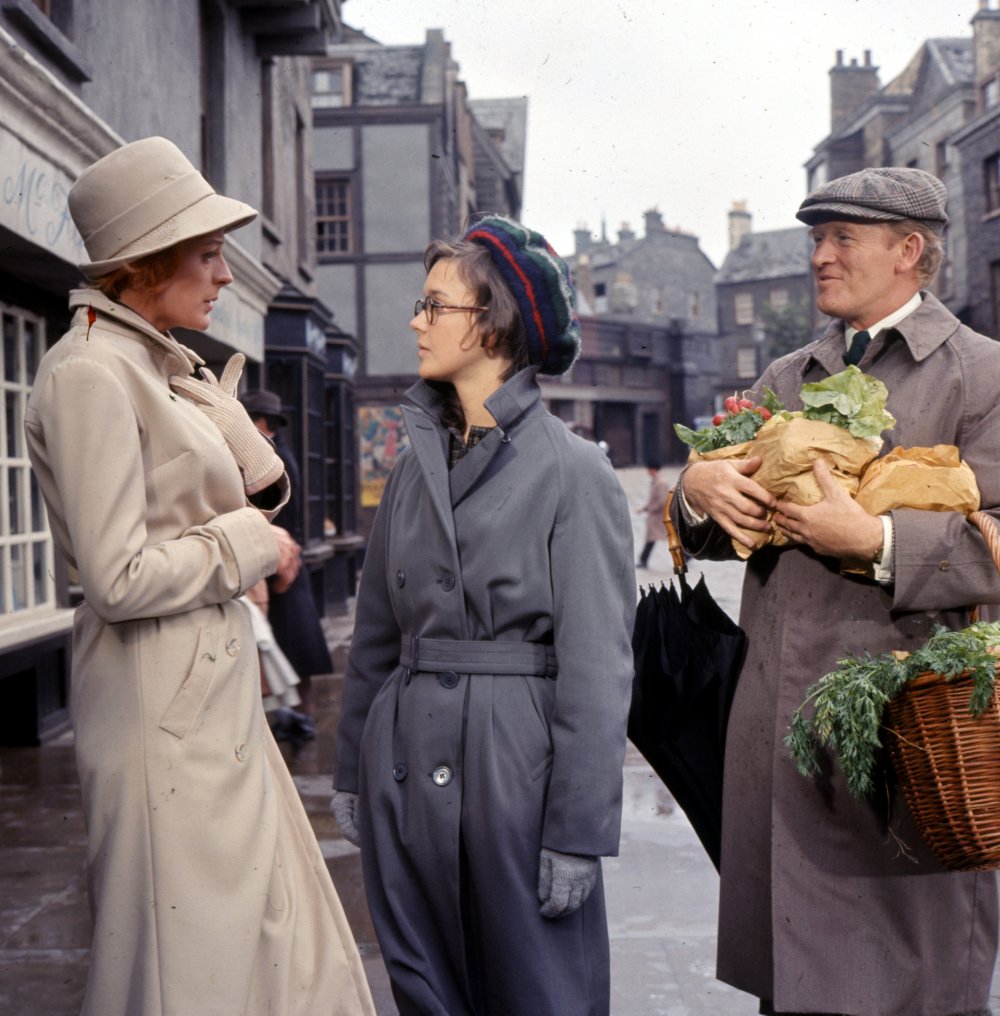 Almost 50 years ago, Ronald Neame’s 1930s-set schooldays drama The Prime of Miss Jean Brodie virtually set the template for the caustic yet secretly vulnerable persona Maggie Smith would continue to deploy all the way up to her Downton Abbey days. In an Oscar-winning portrait of a prideful schoolteacher, Smith is fascinating, both self-righteous and self-loathing, trumpeting Mussolini and Franco to her pupils while concocting schemes to have impressionable students bed her former lover. Initially Miss Brodie appears an ideal tutor, but in the end her personal motto – “Give me a girl at an impressionable age, and she is mine for life” – takes on a more sinister air.

The story may be bitter, but the view of the city is not. These days, it’s uncommon for a film set in Edinburgh to present the city through such an uncomplicatedly romantic lens. Greyfriars Kirkyard, the castle on the hill, the green parks set for al fresco lunches – the setting looks positively idyllic for a film so uncomfortably tart. 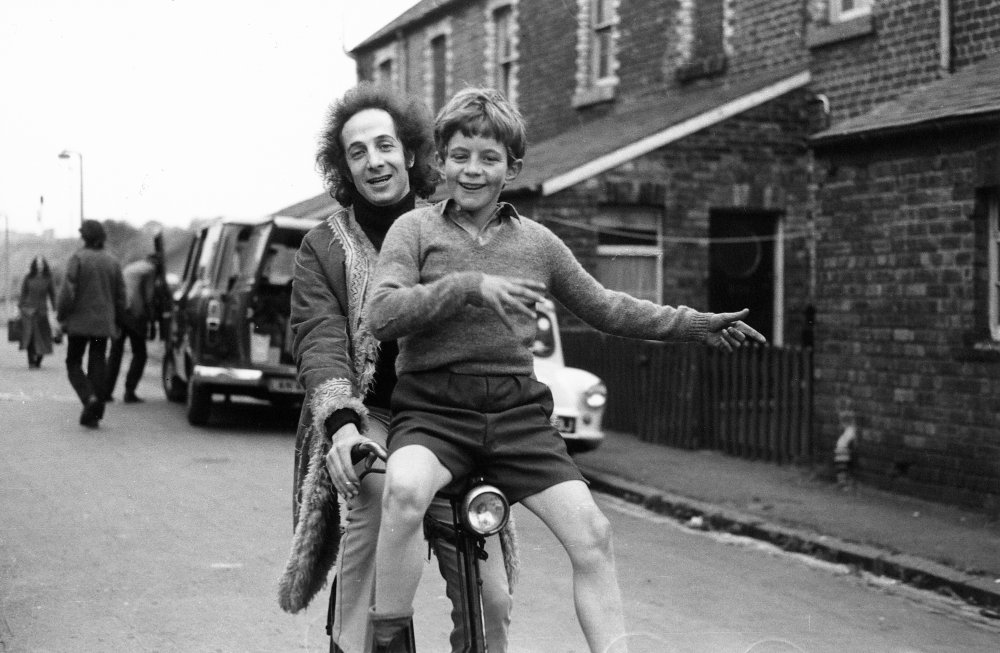 A stark trifecta that only finds hope for its lead character once he’s relocated to Cairo in the final act, Bill Douglas’s trilogy of My Childhood (1972), My Ain Folk (1973) and My Way Home (1978) is an autobiographical poem tied – for most of its running time – to the forgotten outskirts of Edinburgh. From ages 8-16, through foster homes and spoil tips and fields tilled by German PoWs, Jamie (Stephen Archibald, first discovered by the director at a Newcraighall bus stop) comes of age in austerely photographed poverty.

Douglas’s trilogy could be called the Scottish equivalent of François Truffaut’s Antoine Doinel series, which kicked off with Les Quatre Cent Coups in 1959, but one major difference is that we never get to see Douglas’s cinematic surrogate leave his teens. Douglas only got the funding to complete one more feature before his death, the intimate 1986 epic Comrades, and while Truffaut’s muse, Jean-Pierre Léaud, would go on to be a star as an adult, Douglas’s sadly succumbed to drugs and malnutrition aged just 38 (back in the town where Douglas first found him), having secured no further acting work. 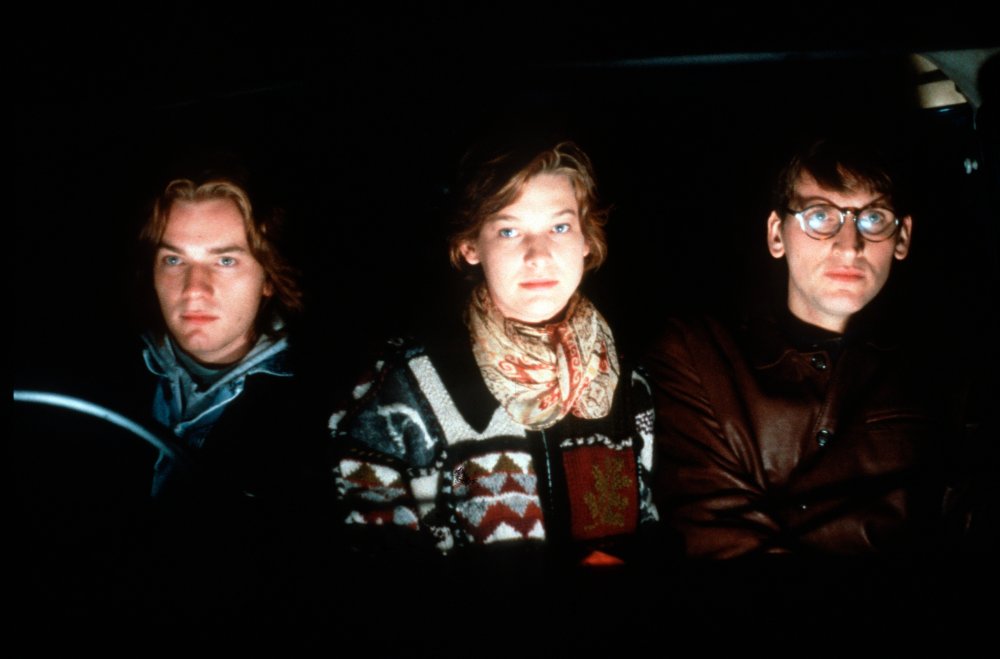 He has since taken his cinema all over the world – to Bangkok, Mumbai, the canyons of Utah – but, with his first two films, Danny Boyle became synonymous with Scotland’s first city. His seismic second feature would cement the association, but Boyle’s first would lay the groundwork: Shallow Grave became a sizeable UK box office hit on release in 1995 and one which, along with Trainspotting, would help generate new interest in Scottish cinema.

Christopher Eccleston, Kerry Fox and Ewan McGregor play a trio of vaguely sociopathic flatmates who, rather than report the death of their new tenant (Keith Allen), decide to dispose of his corpse and keep the suitcase full of money they find under his bed for themselves. Rewatched today, it feels very of its moment, a characteristically 1990s tale of hedonistic twentysomethings complete with house music and generic thriller score. But it’s still a debut of delectable nastiness, with Edinburgh depicted as a pale, sterile place where the amoral reign. 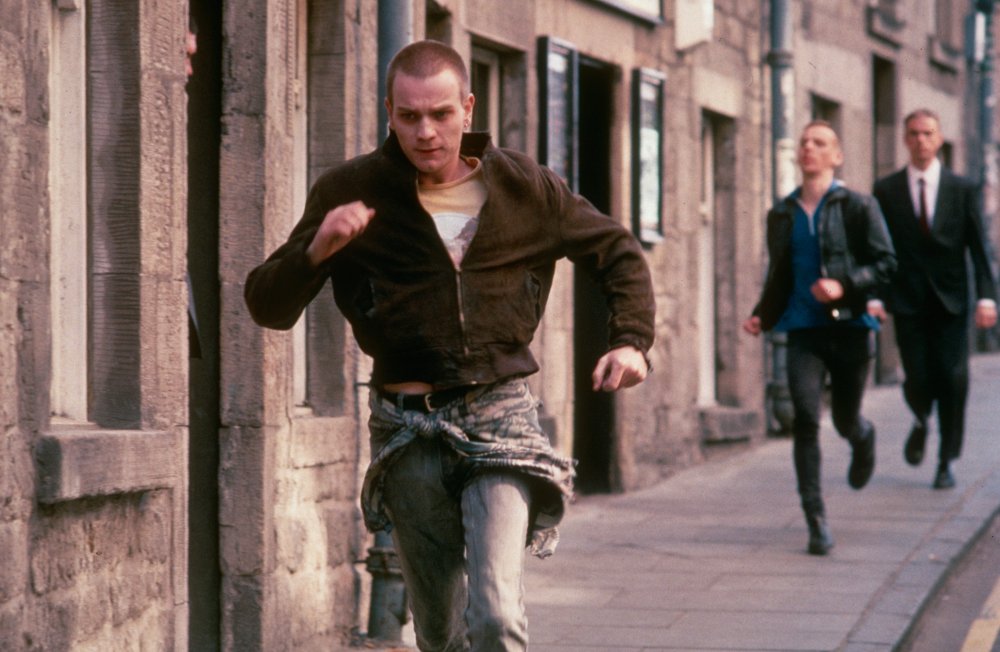 In truth, not all that much of Trainspotting’s ‘Edinburgh’ is really Edinburgh at all. The film was primarily shot in Glasgow, save for a handful of scenes filmed on Princes Street and around Waverley railway station. The near absence of real Embra scenery hasn’t stopped Trainspotting from becoming the Edinburgh film, a picture imbued with native Irvine Welsh’s (who wrote the original novel) familiarity with the place, its lingo and some of its more unsavoury characters.

Still crucial, still vulgar, still compulsively watchable despite the scabrous aesthetic and grim subject matter, Danny Boyle’s movie about a set of Edinburgh junkies – iconically portrayed by Ewan McGregor, Jonny Lee Miller and Ewan Bremner – is old enough now to be a classic, but still feels utterly vital. Boyle approached Welsh’s material with the intention of making “the most energetic film you’ve ever seen”. Some would say he succeeded. 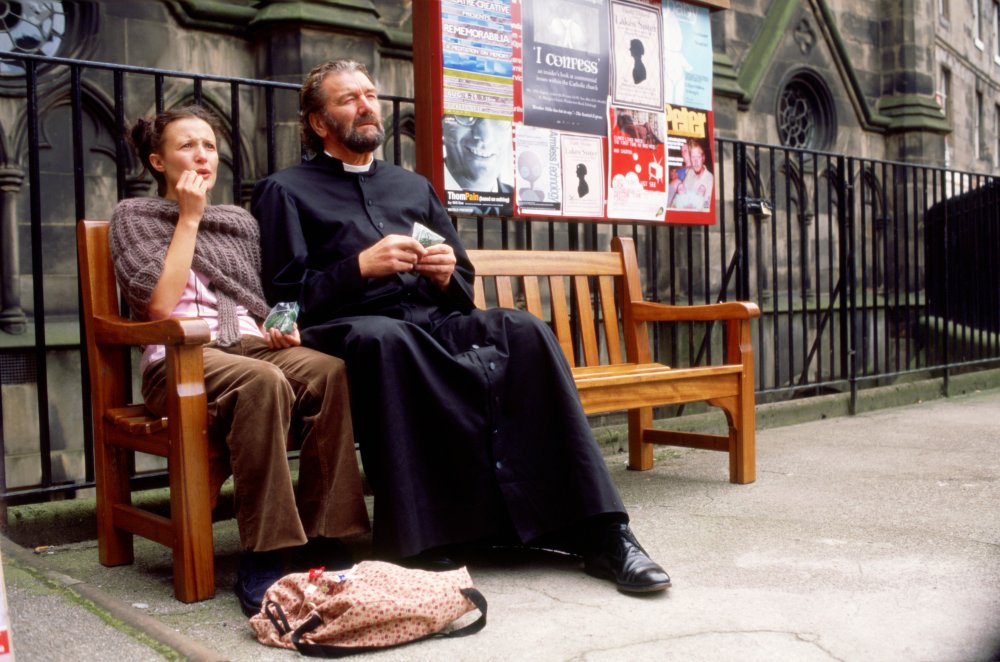 Since its inaugural season in 1947, the Edinburgh Fringe has become an institution so crucial to the city’s identity that it was only a matter of time before it became the subject of a feature film. Shot during the 2004 Fringe, Annie Griffin’s Festival is a quasi-documentary with a fictional comic-drama happening in the foreground, involving numerous British and Irish comic character actors as the dramatists, comics and backstage staff ensuring the annual chaos goes off without a hitch.

Stephen Mangan plays a mean-spirited star comedian, Chris O’Dowd is an insecure standup, while Richard Ayoade and Matthew Holness make cameos as a comedy judge and a sardonic theatre technician respectively. Griffin captures the anarchy of the city at a time when its population doubles and multiple thousands of acts are all hustling for attention; when the tourists stop to watch an argument between a comedian and his agent, unsure whether it’s real life or just a piece of street theatre. 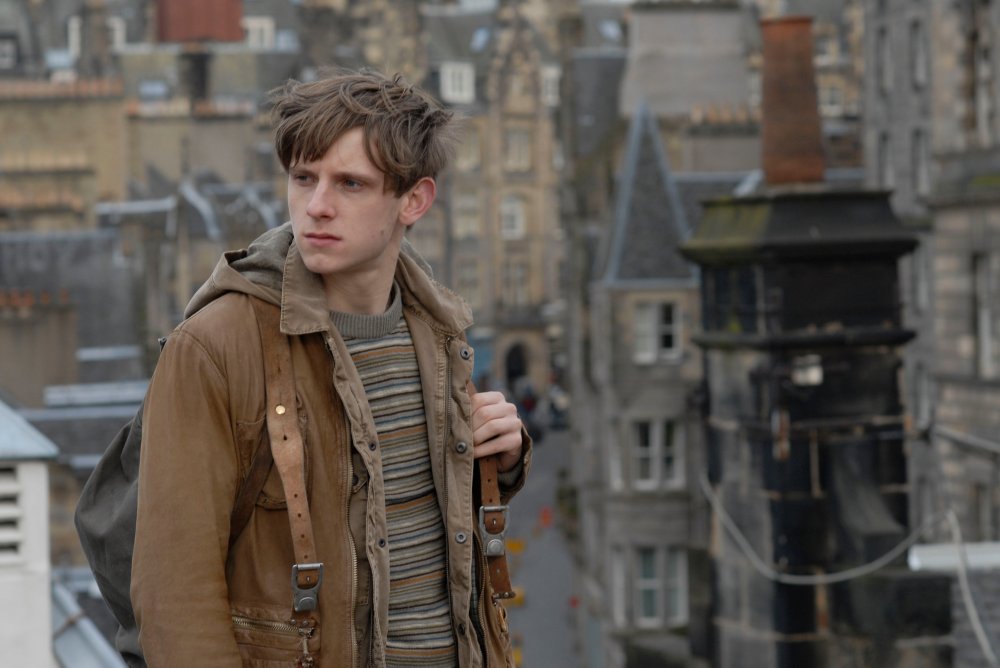 Before he at last got some serious mainstream notice by setting up in Texas for 2016 thriller Hell or High Water, Glaswegian filmmaker David Mackenzie made films all over Scotland. His debut, 2002’s The Last Great Wilderness, was filmed in the Highlands; his 2011 pictures Perfect Sense and You Instead shot respectively in Glasgow and at Kinross’ T in the Park festival; while his 2003 character piece Young Adam took in locations including Perth, Falkirk and Dumbarton.

Arguably the best of Mackenzie’s Scottish cycle is his dreamy coming-of-age psychodrama, Hallam Foe. Jamie Bell stars as the titular teen voyeur, effectively banished from his family’s troubled estate to Edinburgh, where he becomes obsessed with a woman (Sophia Myles) who bears a striking resemblance to his dead mother. It’s from the rooftops where Hallam stalks that we get our best view of the city. Up there it looks almost fairytale-like, a city of old castles and clock towers dotted with light. 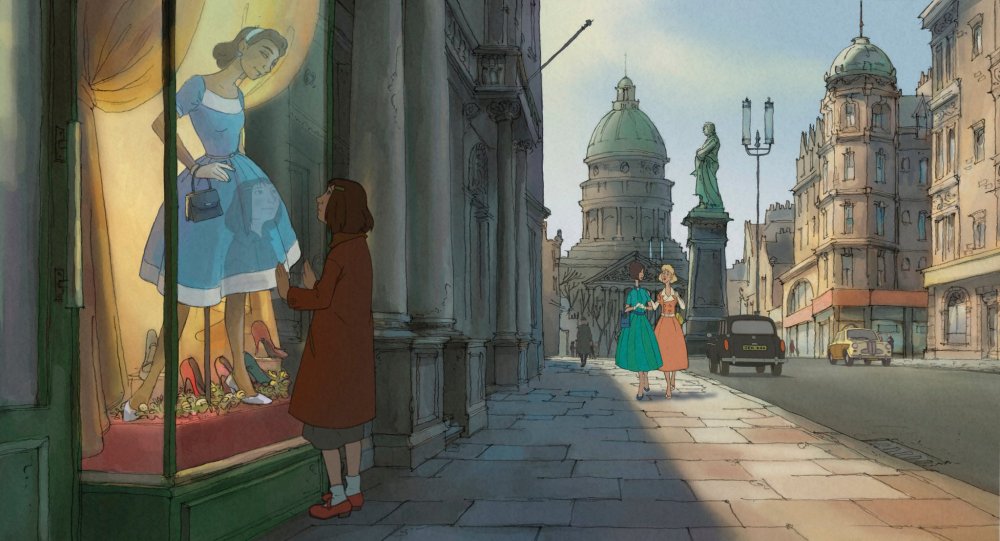 In 1956, Jacques Tati wrote a screenplay for a tender comedy entitled L’Illusionniste, about a struggling French magician who moves to Czechoslovakia and captures the attention of a young woman believing his tricks to be real. The script, intended as a love letter to the French comedy maestro’s daughter, went unproduced in Tati’s lifetime but was finally picked up and realised by Belleville Rendez-vous director Sylvain Chomet in 2010. For his adaptation, Chomet changed the setting. Instead of Czechoslovakia, Chomet decided to bring Tati’s illusionist to Edinburgh.

In typically Tati-esque fashion, The Illusionist’s lead (who’s designed to look like Tati’s Monsieur Hulot character) suffers mishap after embarrassing mishap trying to get to grips with his alien environment, which – from Arthur’s Seat to Castle Rock – is animated with Chomet’s warm, nostalgic palette. Crucially, the French Chomet captures smoky mid-50s Edinburgh beautifully, but perhaps even more crucially, his film somehow truly captures the spirit of Tati. 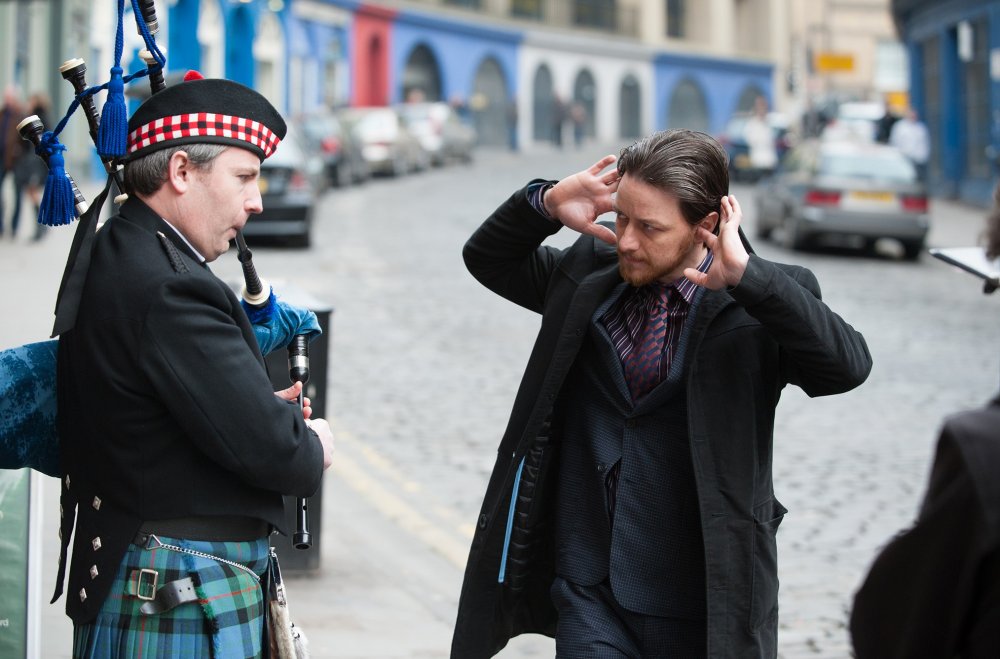 It seems just a touch unfair that a city as vibrant and multifaceted as Edinburgh has come to be defined on the big screen by a vision as unsparingly seedy as Irvine Welsh’s, but arguably defined it he has. So far five of Welsh’s narcotics-fried Edinburgh tales have made the transition from book to film: Trainspotting and its sequel, 1998’s The Acid House, 2011’s Ecstasy and 2013’s Filth.

The last of these is comedy of the blackest sort, its focus a substance-addled detective (James McAvoy) and his exploits manipulating friends, chasing women and screwing colleagues out of a promotion he seems to think will soothe his rotting soul. It’s Radge Lieutenant: Port of Call Auld Reekie, featuring Edinburgh as hellish urban circus and a ghoulish McAvoy as its raw-eyed ringleader, dangerously self-destructing inside its night clubs, brothels and masonic halls. 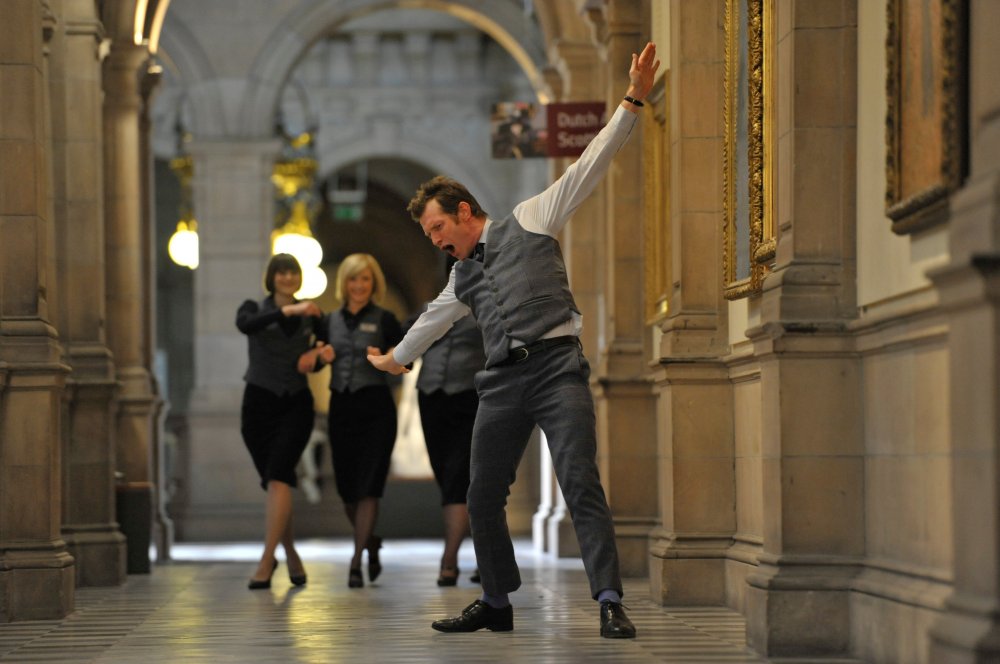 If Filth was the product of a reliable cynic, then Sunshine on Leith surely sprang from the mind of an eternal optimist. Adapted by Stephen Greenhorn from his stage hit, Dexter Fletcher’s jukebox musical raids Edinburgh band The Proclaimers’ back catalogue and fits their tracks into a narrative about two Leith soldiers (George MacKay and Kevin Guthrie) returning home from Afghanistan.

The film’s not short on the tougher stuff – in between infectious singalongs, Fletcher and Greenhorn cover infidelity, rejection and the human cost of war – but the overwhelming takeaway is a sense of unfettered joy. Fletcher offers a picture postcard look at Edinburgh, all sun-splashed wide angles and helicopter shots of the city, while the on-screen Scottish and English stars prove themselves surprising double threats, with the likes of MacKay, Guthrie and Peter Mullan joining Jane Horrocks in lending pipes as well as pathos.