10 great films set in Britain during the Second World War

Brilliant British dramas about the blitz, the home guard and the war effort in Blighty.

Buy tickets for Their Finest at BFI Southbank

Explore the accompanying season, Girls Like Us: British Women and WWII Cinema, at BFI Southbank

Richard E. Grant’s Ministry of Information mandarin has it spot on when he declares in Lone Scherfig’s Their Finest that wartime propaganda films should combine “authenticity with optimism”. Needing to get vital messages across to the public, the MOI sought to ensure that movies entertained as well as educated. But, with a third of the nation steering clear of cinemas altogether and the bulk of younger viewers preferring Hollywood escapism, British producers had their work cut out in order to do their bit for the war effort.

Hitting the right note proved tricky, as flag-waving features and instructional shorts alike had to appeal to the nation at large and reflect the realities of ‘the People’s War’ without lowering morale or raising false hopes. Thus, filmmakers had to paper over the cracks in national unity caused by the class system and blur the lines between the sexes, as women increasingly came to be asked to keep more than the home fires burning. They also had to excite and provide a distraction from concerns about loved ones overseas and, in the case of urban moviegoers, the nightly bombing raids.

Yet, while they could echo the advice and warnings contained in government-sponsored shorts, screenwriters were restricted in what could be discussed without betraying secrets or sapping spirits. Between 1939-45, therefore, there was little overt mention in fictional films of munitions work, the black market, evacuation, adultery, enemy aliens, Jewish refugees, axis PoWs or allied service personnel. Some of these topics have subsequently surfaced, but most remain relatively underexplored. Indeed, with the emphasis often falling on ‘now it can be told’ accounts of heroic combat and espionage exploits, the Home Front has only occasionally been revisited since producing so many classics during the war itself. 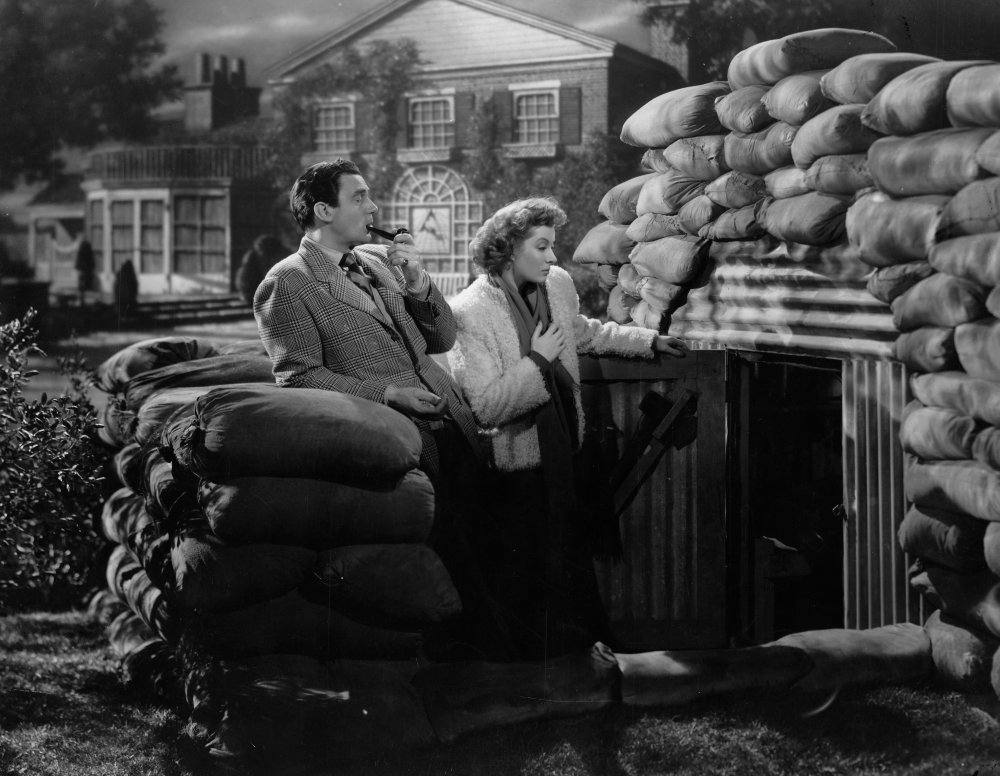 Despite being pilloried by the London critics, this sentimental MGM homage to the plucky limeys resisting the beastly Germans was much more popular with British audiences than any indigenous snapshot of Home Front life. But it was the impact Stateside (where it won six Academy Awards) that prompted Winston Churchill to dub it “propaganda worth 100 battleships”, as the way “an average middle-class English family” coped with sacrifice, danger and death provided both a psychological and a strategic justification for committing US forces to Europe.

Viewers on opposite sides of the Atlantic would have had differing views of ‘Starlings’, the Minivers’ idealised home in the fictional Kentish village of Belham. Yet, while the stereotypical depiction of an embattled Olde England bore little resemblance to reality, few were left unmoved by the Minivers’ stoic courage during the blitz or by Greer Garson’s heroic assault on German airman Helmut Dantine after he boasts: “We will destroy everybody.” 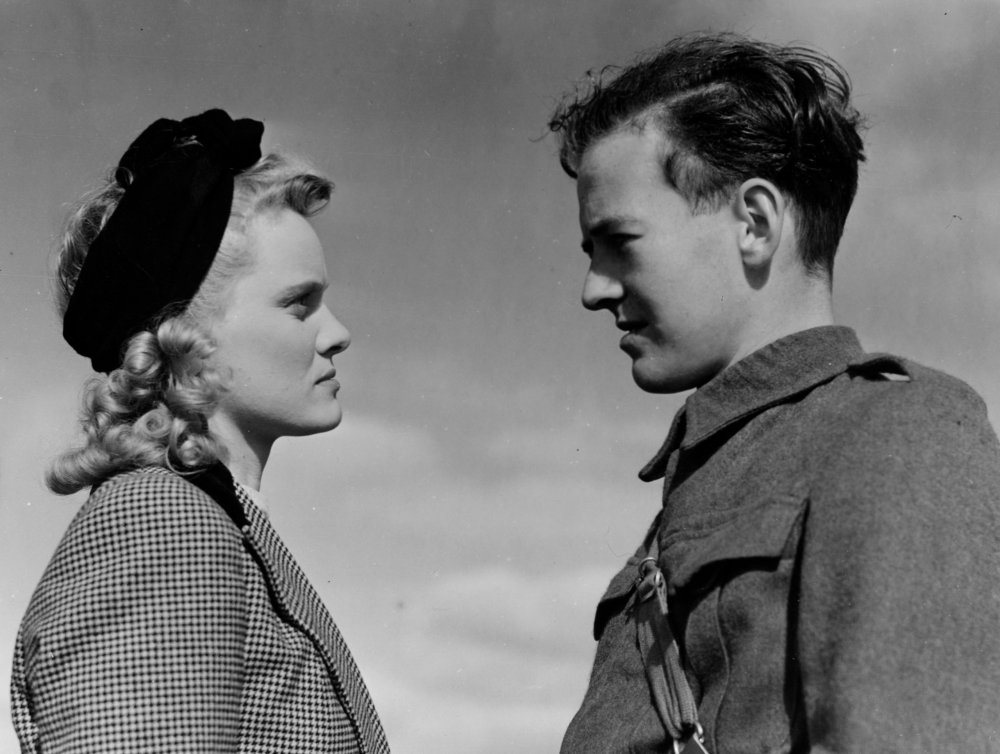 Released in the same year as Charles Frend’s The Foreman Went to France and Harold French’s Unpublished Story, Thorold Dickinson’s realist treatise on careless talk opens with a stark accusation: “This is the story of how YOU unwittingly worked for the enemy.” Yet, while its fact-based message is deadly serious, there’s much sly humour in this engrossing and often chilling account of fifth columnists seeking to ascertain details of a training exercise at Watercombe. In Stephen Murray’s bookshop, for example, Mervyn Johns peruses a tome entitled I Am a Nazi Agent.

The losses incurred during the raid on the U-boat base at Norville are no laughing matter, however, and prompted Churchillian demands for a ban. Yet Dickinson (who consciously eschewed a relatable human interest angle in order to drive home his theme) daringly concludes this ‘film with a purpose’ by having genial train passengers Basil Radford and Naunton Wayne blab about a munitions factory in Johns’ hearing. 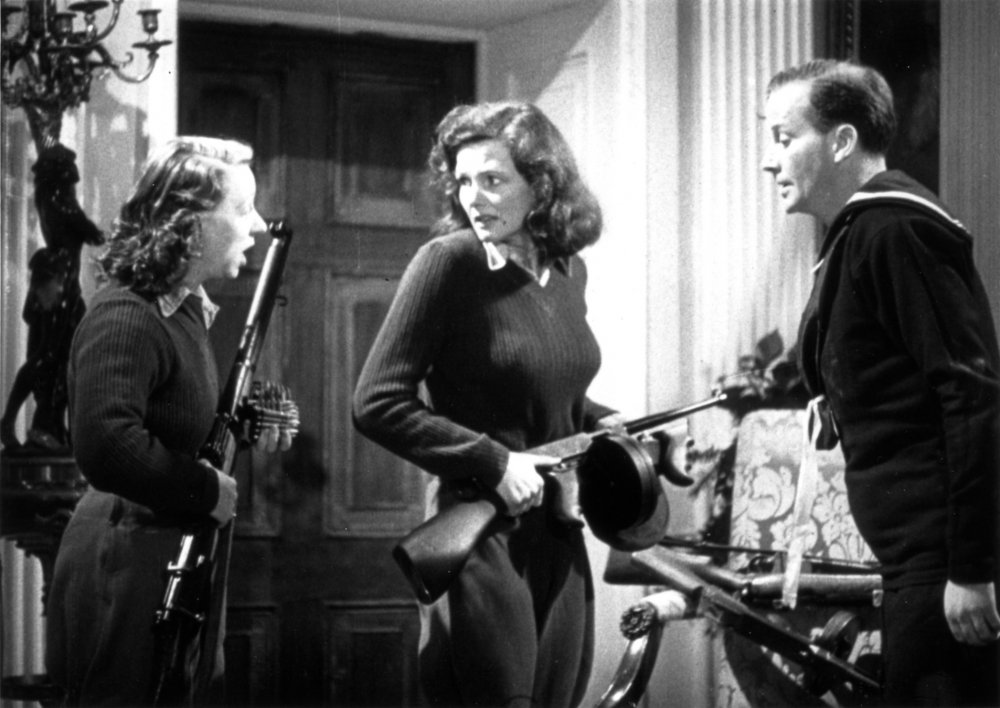 Despite the German gravestones in the prologue, the shattering of the rural idyll of Bramley End still comes as a shock in this loose adaptation of the Graham Greene story, ‘The Lieutenant Died Last’. Wartime audiences would have been appalled by the notion of a treacherous squire. But what most intrigues director Alberto Cavalcanti is the way that “people of the kindest character” become “absolute monsters” as soon as the war touches them. The Nazis might execute the vicar for ringing the church bells and mow down the home guard, but postmistress Muriel George buries an axe in one German’s skull, while poacher Edward Rigby shoots another and lady of the manor Marie Lohr takes the full blast of a grenade to protect some children before vicar’s daughter Valerie Taylor kills the quisling.

Nevertheless, screenwriters John Dighton, Diana Morgan and Angus MacPhail also have a little suspenseful fun with the secret messages the villagers attempt to smuggle out to raise the alarm. 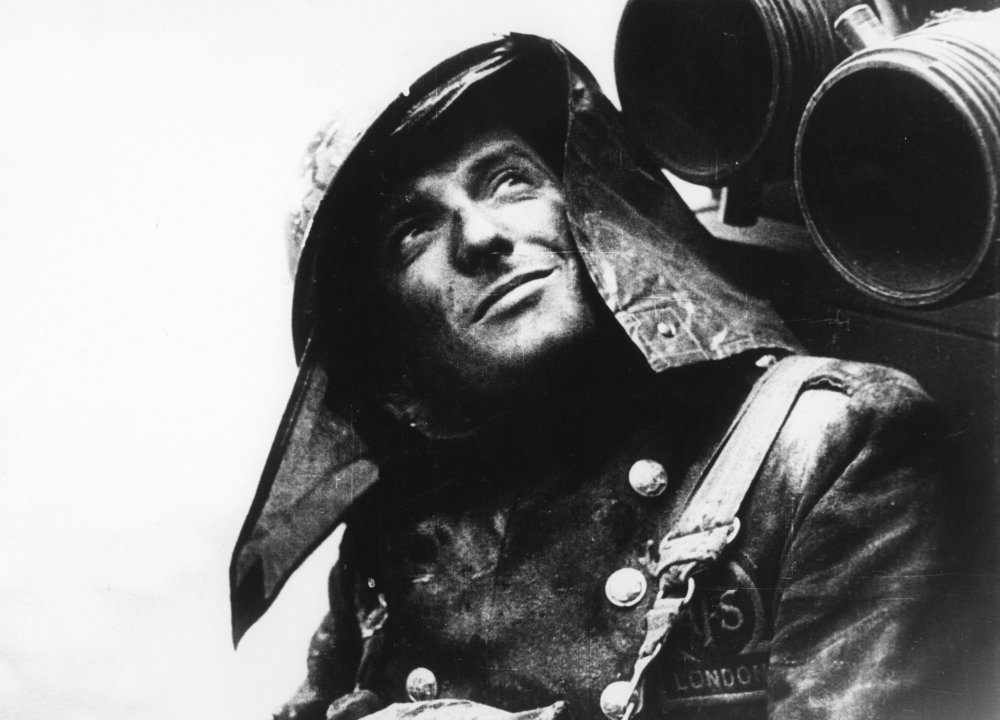 British cinema perfected the docudrama during the Second World War, with Charles Frend’s San Demetrio London (1943) and Pat Jackson’s Western Approaches (1944) among those to take their cues from Humphrey Jennings’ tribute to the Auxiliary Fire Service, which also featured in Basil Dearden’s The Bells Go Down (1943).

While Dearden’s film commended the AFS’s courage and fortitude, the camaraderie is much more authentic among the volunteer firefighters re-enacting their routines for Jennings’ camera. There’s also more of a sense of palpable danger, as the ordinary blokes who had been singing around the piano before the siren sounded risk their lives to tame the dockland blaze threatening an ammunition ship. The immediacy of the daunting struggle is gripping and drives home the true terrors of the blitz. The enemy goes unseen. But, even though its destructive potency is plainly evident, it can never break the spirit epitomised by the post-raid rallying cry: “Come on, chums! Snap out of it!”

“Women… women all over the place,” director-narrator Leslie Howard complains playfully at the start of what would be his last film before his plane was shot down. “They think they’re helping, I suppose.” But a woman’s work was never done during the war, whether they kept house (They Also Serve, 1940), nursed (The Lamp Still Burns, 1943), dug for Britain with the Women’s Land Army (Up with the Lark, 1943; The Land Girls, 1998), supported the ‘few’ in the Women’s Auxiliary Air Force (The Americanization of Emily, 1964) or cracked codes at Bletchley Park (Enigma, 2001; The Imitation Game, 2014).

Yet the lot of the Auxiliary Territorial Service appeared the most glamorous, thanks to Deborah Kerr in Michael Powell and Emeric Pressburger’s The Life and Death of Colonel Blimp (1943) and the seven recruits (including Lilli Palmer’s Czech refugee) who drive lorries and operate anti-aircraft guns in this droll, ironic but unflinchingly feminist bid to prove that “this is a woman’s war” and that peacetime Britain will be all the better for it. 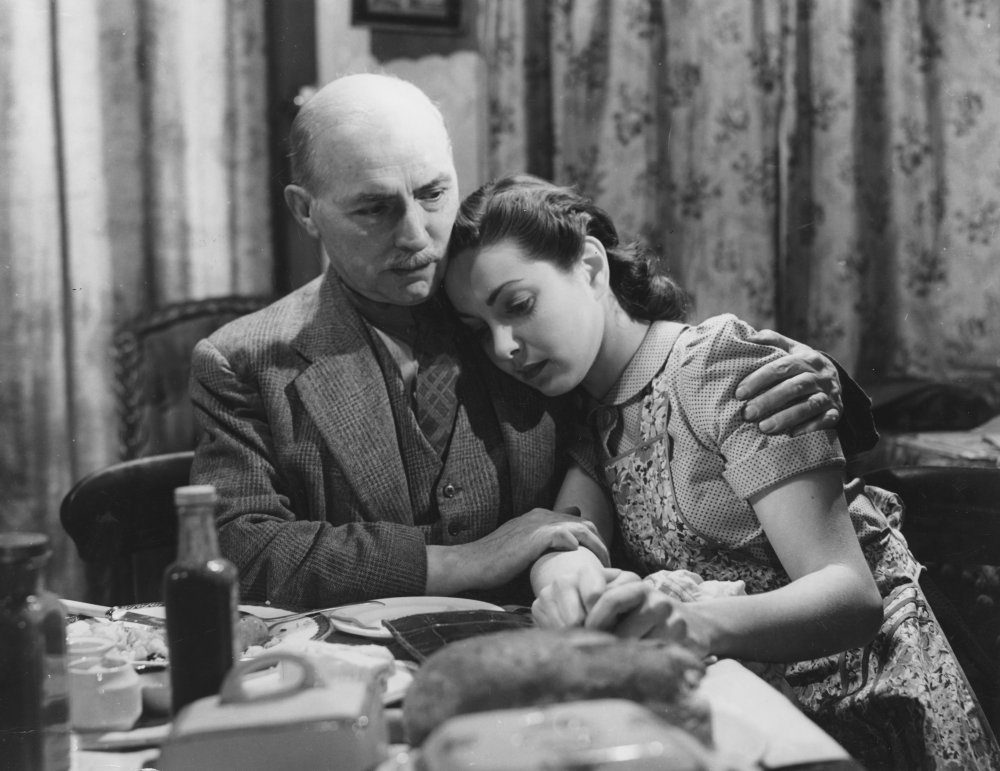 Frank Launder and Sidney Gilliat were the boldest cinematic chroniclers of the domestic scene during the Second World War. They often broached topics contemporaries shied away from. In Two Thousand Women (1944) they lauded the pluck of the detainees in an internment camp in Nazi-occupied France, while in Gilliat’s Waterloo Road (1945) he pitted a deserter against a spiv in their infidelity drama.

But it was their sole venture as co-directors that best encapsulated Home Front problems and privations, as daddy’s girl Patricia Roc and bourgeois snob Anne Crawford confront bitter reality after meeting RAF rookie Gordon Jackson and bluff foreman Eric Portman while working in an aircraft components factory. Touching on everything from shortages to sex, class to culture, and blackouts to bereavement, the screenplay is virtually a handbook of how to cope with any wartime eventuality. Laced with acerbic wit and everyday empathy, this conveyed the “in it together” mindset better than any other British war film. 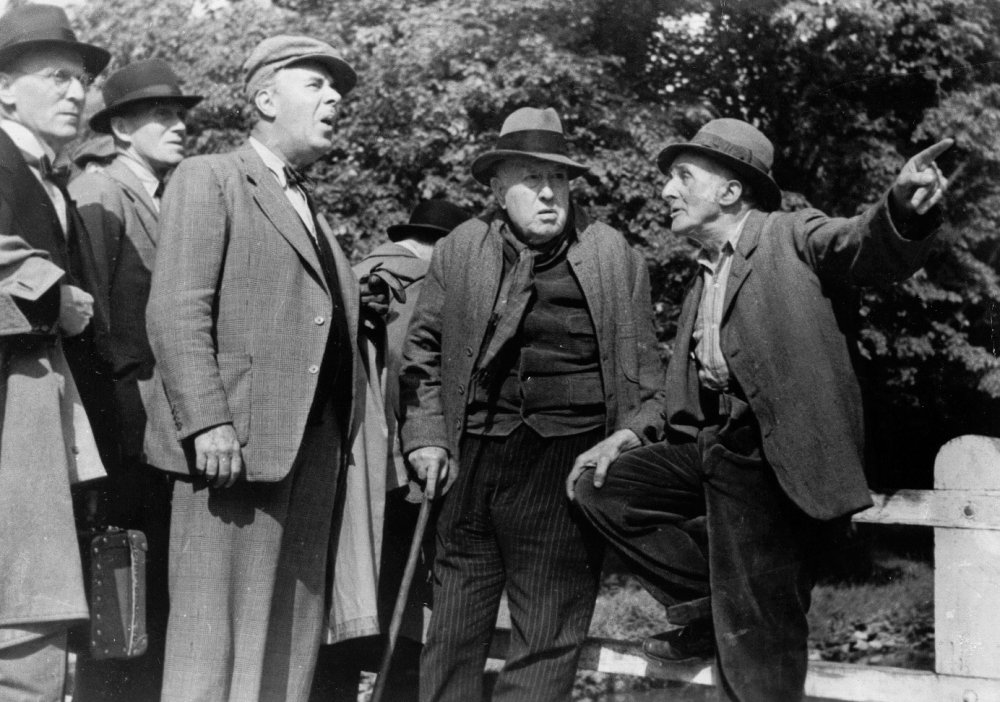 While the likes of Welcome Mr. Washington (1944), Great Day (1945) and I Live in Grosvenor Square (1945) extended British hospitality to visiting Americans, Anthony Asquith’s The Demi-Paradise (1943) was alone in offering the hand of friendship to our Soviet allies. Visitors from the east do cause a commotion in Bernard Miles’ directorial debut, however, as Russian sharpshooter Lucie Mannheim (who has killed over 100 Germans) is joined in the village of Lipsbury Lea by a pair of pipits, who build a nest in a field that has been earmarked for ploughing by the local War Agricultural Executive Committee.

While less quirky than Michael Powell and Emeric Pressburger’s equally deft allegory, A Canterbury Tale (1944), this charming but deceptively serious-minded picture extols the British readiness to accept outsiders. Indeed, there’s an enduring relevance to the assertion of Miles’s wheelchair-bound colonel that “a lot of them are jolly decent people, and, anyway, they can’t help being foreigners”. 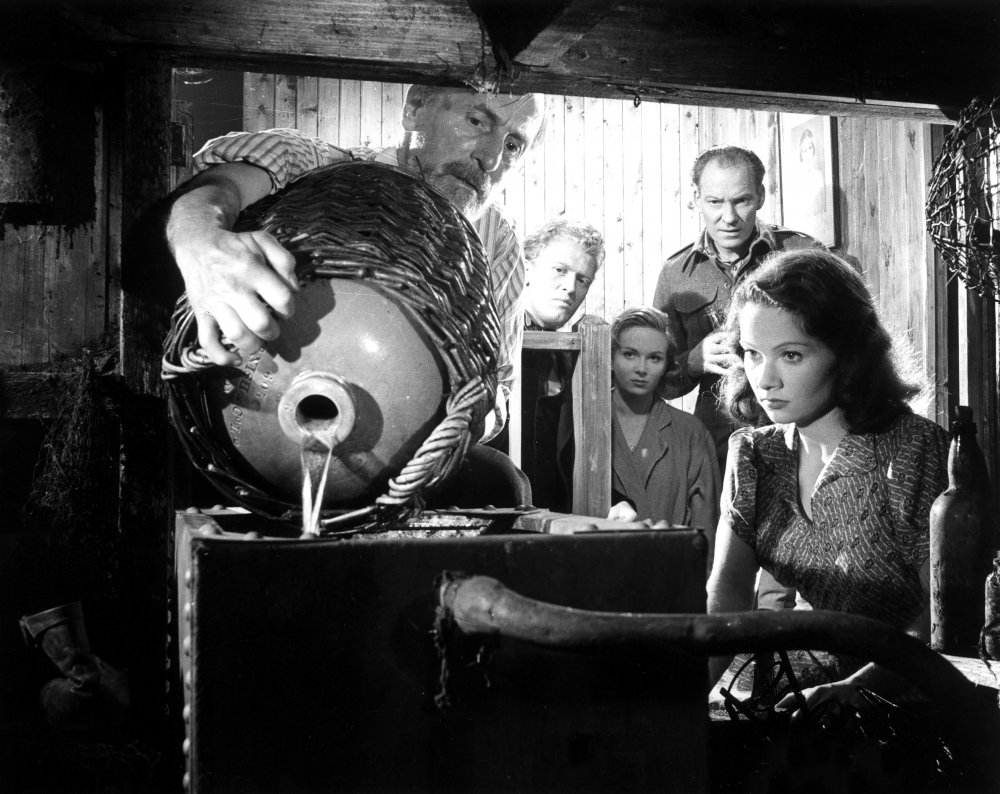 Mention the home guard and the modern movie mind is more likely to drift towards Walmington-on-Sea than the Isle of Todday. But, long before Captain Mainwaring formed his platoon in Dad’s Army (1971 and 2016), Captain Waggett became the Sassenach enemy within when he tried to prevent the Outer Hebrideans under his jurisdiction from recovering the 50,000 cases of Scotch left aboard the SS Cabinet Minister after it ran aground in a fog.

Co-scenarist Compton Mackenzie based his source novel on actual events, but the debuting Alexander Mackendrick puts the Ealing comic spin on a sometimes cruel study in gleeful subversion that became the studio’s most profitable picture. Gillies MacKinnon’s forthcoming remake sees Eddie Izzard inherit the role of the resistibly pompous Waggett from Basil Radford, who was beloved by contemporary audiences for a 12-film partnership with Naunton Wayne that included four outings – notably The Lady Vanishes (1938) – as the cricket-loving personification of British stiff upper-lippery, Charters and Caldicott. 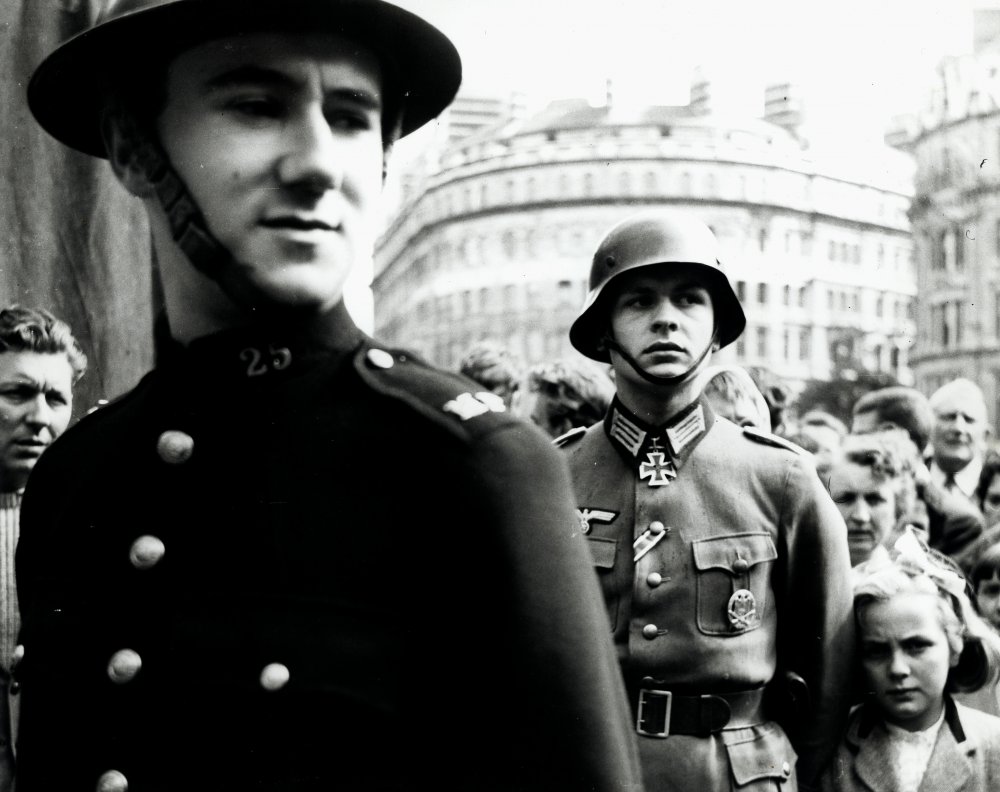 With the age of alternative facts seeing both The Man in the High Castle and SS-GB capture the imagination of television audiences, it seems eminently justifiable to include Kevin Brownlow and Andrew Mollo’s chilling speculation on the Nazi conquest of mainland Britain in this survey of Home Front classics. Conceived by the teenage Brownlow in 1956, this stark depiction of occupation and collaboration took eight years to realise, as the co-directors had limited funds and insisted on every detail being as authentic as possible.

Thus, using short ends donated by Stanley Kubrick from Dr. Strangelove (1964), cinematographer Peter Suschitzky is able to give the visuals the harsh glare of reality. This extends to the readiness with which Irish nurse Pauline Murray and her adopted compatriots acquiesce in a transition that sees jackboots on Whitehall and the theories of racial purity and forced euthanasia becoming accepted state policies. Fives decades on, this remarkable film can still instil dismay and dread. 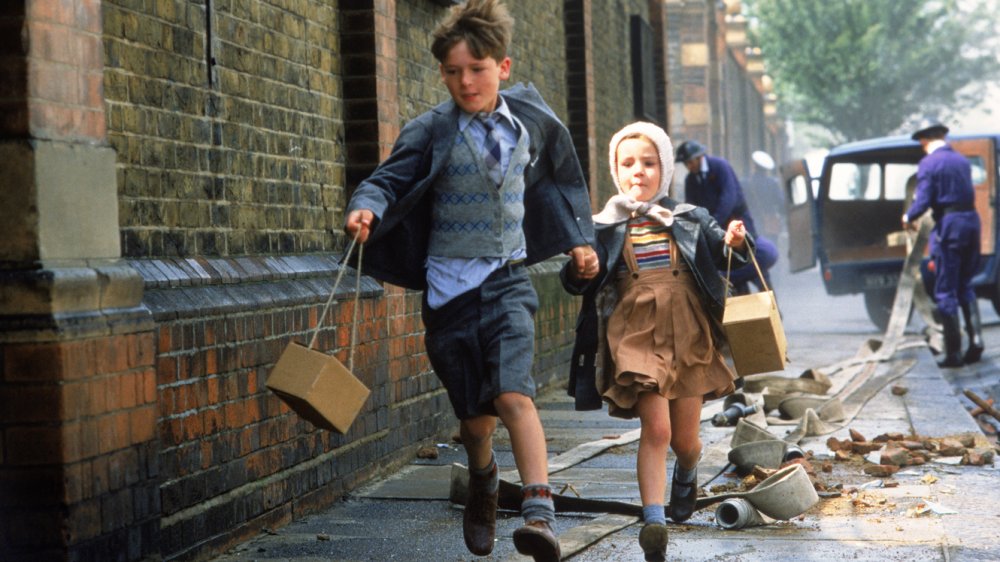 Presenting a rosier picture of wartime childhood than Philip Leacock’s Reach for Glory (1962), and a less sombre view of Home Front morality than Edward Dmytryk’s The End of the Affair (1955) or John Schlesinger’s Yanks (1979), John Boorman’s breezy memoir is awash with nostalgia. Almost 20,000 Londoners were killed during the 71 air raids the capital endured during the blitz, while a million homes were destroyed or damaged. But the four-decade gap enables Boorman to humanise the terror of the bombing (“Drop it on Mrs Evans, she’s a cow”) and romanticise its consequences  (“Thank you, Adolf!”). For kids collecting shrapnel and vandalising bombsites, the war did feel as exciting as a Hopalong Cassidy western. But the grimmer truth is bitingly summed up by the teacher pointing to a map of the world and cursing: “Men are fighting and dying to save all the pink bits for you ungrateful little twerps.”