Felines on film: we celebrate 10 classic movies that wouldn’t be the same without their pussy cat stars. 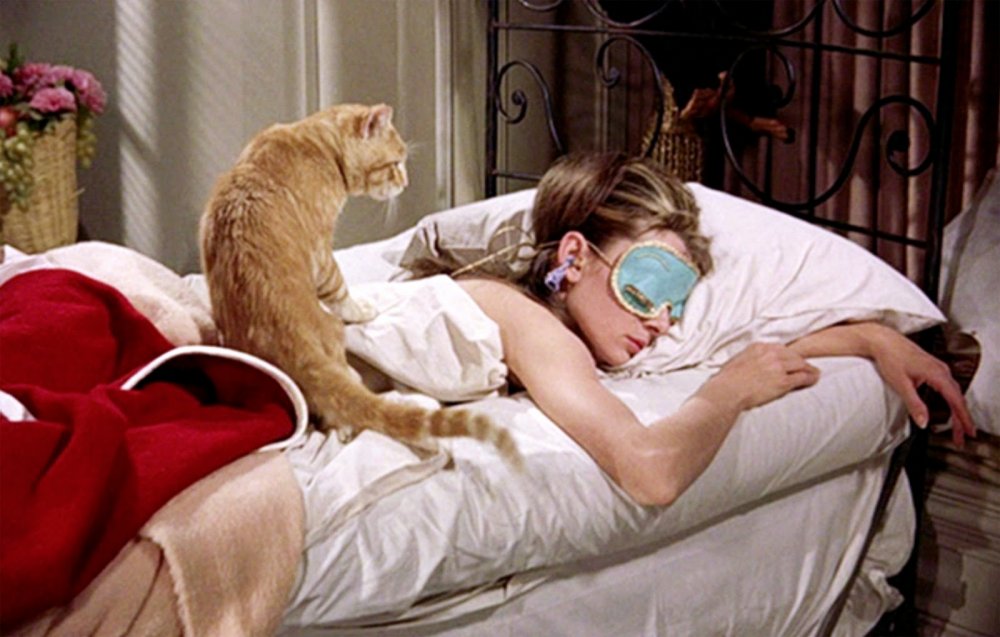 Can cats act? Frank Inn, a legendary animal trainer who worked with the feline star of Breakfast at Tiffany’s (1961), would probably testify as a witness to their acting abilities. Others might argue that the joy of observing a cat on screen lies in its aloofness; knowing that it doesn’t give a rat’s tail about the director’s vision.

Cats have long cast their spell over Hollywood, charming the likes of Marlon Brando and James Dean. Stanley Kubrick was also a loving companion, allowing his cats into his editing room, and reportedly quenching their thirst with Evian water. Elusive filmmaker Chris Marker circulated the same picture of a cat when journalists asked him for a publicity shot.

In front of the camera though, cats are rarely given the roles of a lifetime. Those are mostly handed to dogs, who, like actors, are good at following directions and generally seek to please. Still, cats have stolen many a scene and have served as irreplaceable narrative devices. They often make loyal companions (Harry and Tonto, 1974). They provide crucial catalysts to the plot (Dogtooth, 2009), or win us over with their cute factor (Cléo from 5 to 7, 1962). They act as agents of the supernatural (The Black Cat, 1934) and provide endless inspiration to animators (The Cat Returns, 2002).

Cats may not dominate the film world the same way they do the internet, where cat videos and images are a phenomenon generating billions of views, but their on-screen presence demands our attention like the best stars of cinema.

Before Lolcats, there was The Sick Kitten, a short film made in 1901 – six years after the birth of cinema, and 112 years before today’s cat-dominated internet scene. The premise is simple: two children play doctors with a kitten who is suffering from an unknown ‘illness’. It licks away at the ‘medicine’, which we suspect is really milk. Within seconds, the kitty is cured and the young duo congratulate themselves with a triumphant handshake.

The film was made by pioneer G.A. Smith, who was clearly one of the earliest to identify the disarming screen presence of the domesticated cat.

Jean Vigo’s beautiful tale of young newlyweds beginning life aboard a barge was recently voted number 12 in Sight & Sound magazine’s Greatest Films of All Time poll. The film features cats in most of its scenes – they belong to grumpy crewman Père Jules (Michel Simon), who lets them roam free in the confines of what should be a nest for lovebirds Juliette (Dita Parlo) and Jean (Jean Dasté). As he welcomes the couple’s arrival aboard his boat L’Atalante, he dances and plays the accordion, while a kitten plonked on his shoulder hangs on for dear life. Will it keep its grip or fly into the water? The scene is hair-raising and funny in equal measure.

Jean Vigo, who grew up surrounded by roaming cats, was originally going to pair Père Jules with a dog. Luckily, he opted for cats, who blend in perfectly with the film’s naturalist and surrealist tones.

Avant-garde artist Alexander Hammid was married to pioneering filmmaker Maya Deren when he made this silent, black-and-white short about their New York cats venturing into parenthood.

With thoughtful and humorous editing, and a few intertitles placed here and there, Hammid creates a simple narrative for us to follow. Through a cat’s eye perspective, we’re given privileged access to the unfurling of magical moments, from birth onwards. Soon enough, the kittens take their first steps and they gradually become fluffier and more daring. Brace yourselves for the close-up of kitten birth, and gripping action when one of the little critters attempts to ascend a climbing post. 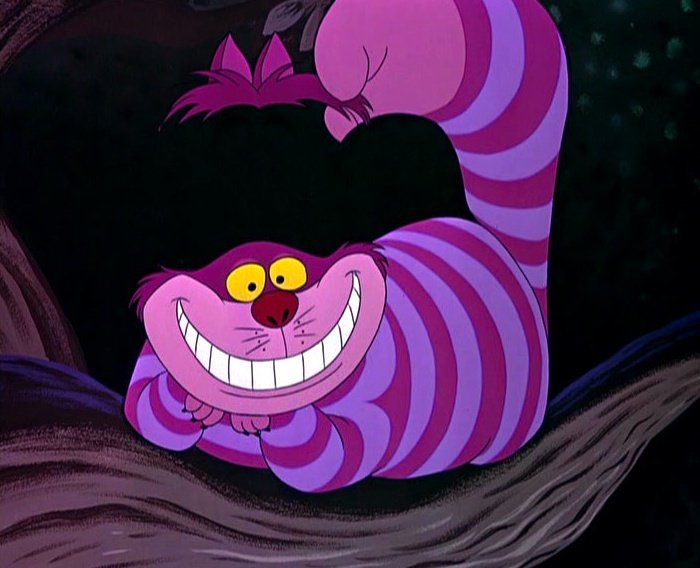 Walt Disney’s interpretation of the Cheshire Cat has become practically synonymous with the character from Lewis Carrol’s classic tale. The animation studio achieved a clever balance between the cat’s menace and the film’s more innocent and whimsical strokes (the character was after all voiced by Sterling Holloway, the man who voiced silly old bear Winnie the Pooh).

Like clowns, anything with a permanent grin has the power to conjure up nightmares, yet the Cheshire Cat’s confidence and air of enigma has earned him a loyal fanbase. There are plenty of madcap contenders in Alice in Wonderland – the March Hare, the White Rabbit, the hookah-smoking Caterpillar. Yet the Cheshire Cat has historically stood out the most… due to its cat credentials, we wonder? 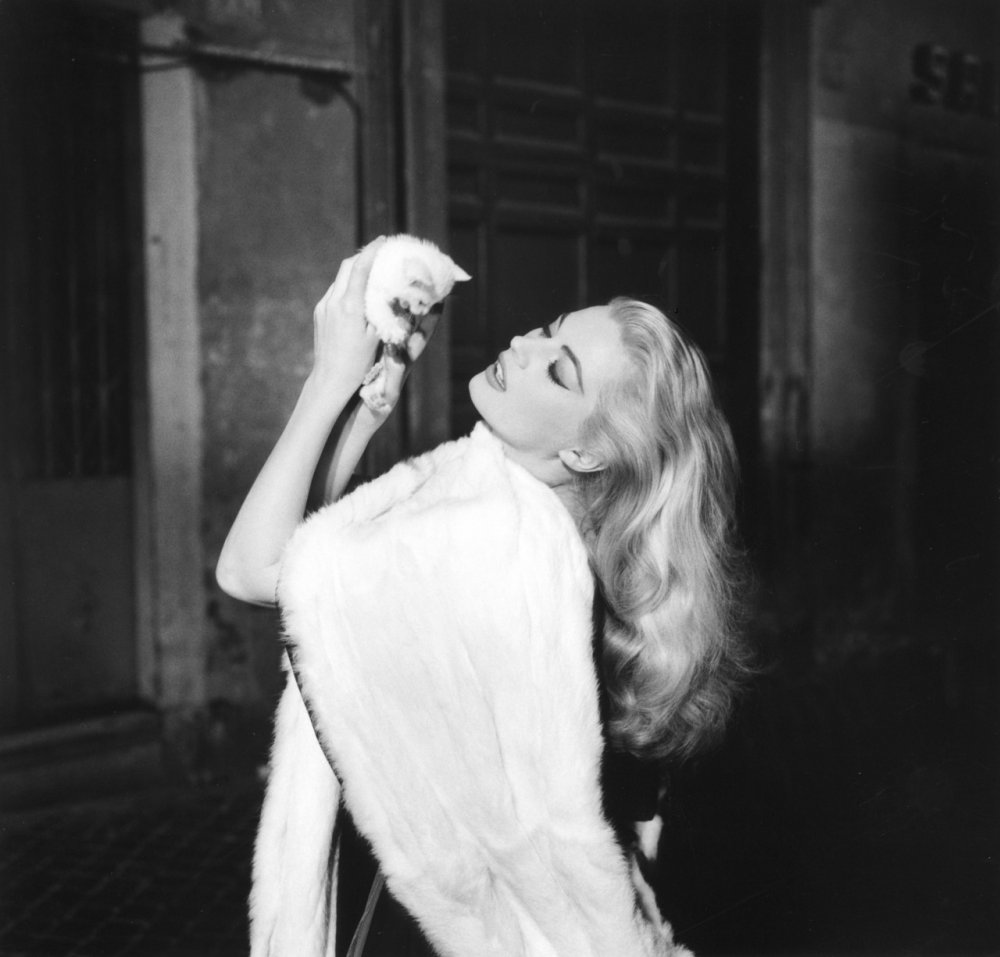 Chasing after the ‘unattainable woman’ is hard enough – add an irresistible kitten to the scenery and you have some serious competition to reckon with. Tabloid journalist Marcello (Marcello Mastroianni) finds himself alone in the streets of Rome with movie star Sylvia (Anita Ekberg). He has been seduced by a siren; alas, she is smitten with a kitten.

The moment is dreamlike, as it culminates with the film’s famous fountain scene, but there are laughs too. Sylvia insists on feeding the kitten, to which Marcello moans, “Where am I going to find milk at this hour?” He goes on to explain that the city is filled with cats; if they start here, where will they draw the line. In the end, Marcello is unable to resist the request and heads off on the hunt for some milk, while Sylvia wanders aimlessly with her new friend resting on her head. 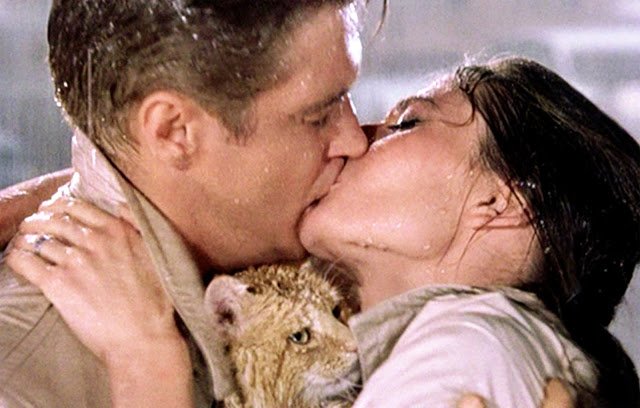 Though sources suggest that nine cats were used to stand in as Holly Golightly’s feline house guest, the role is widely credited to a professionally trained cat actor named Orangey. How else would that final scene in Breakfast at Tiffany’s be achieved, without a tolerant creature to withstand the down-pouring rain, while being sandwiched between two lovers? Indeed, Orangey was honoured with the Patsy Award that year for his performance, the animal equivalent of receiving an Oscar.

“I’m like cat here, a no-name slob”, says Holly, “We belong to nobody, and nobody belongs to us. We don’t even belong to each other.” Cat is therefore a metaphor for Holly’s independent and detached spirit. All this changes however in the climactic finale, where the pair finally embrace their relationship. Audrey Hepburn said that throwing her co-star out of a taxi in this scene was the most distasteful act she had to carry out on a film set. 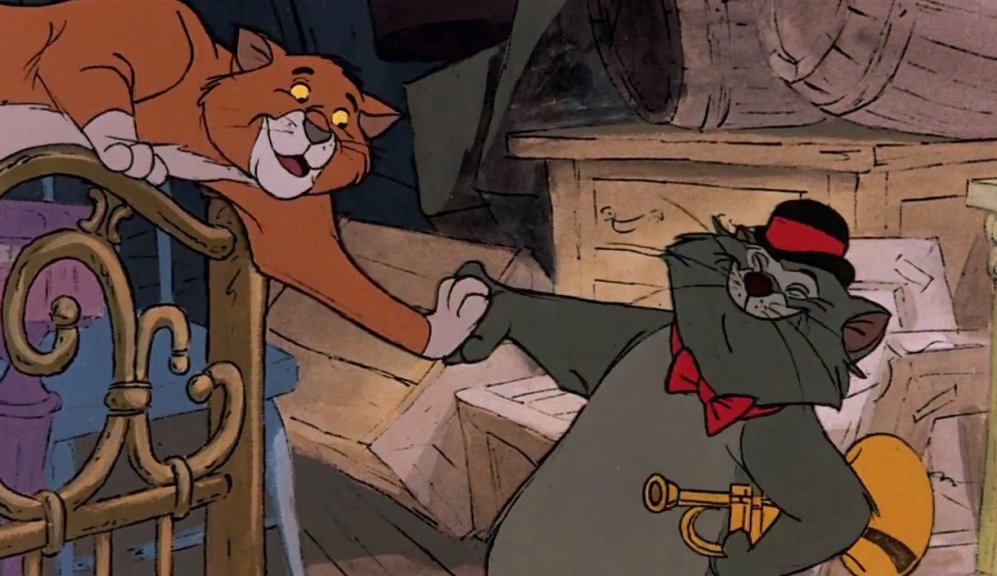 One of the greatest on-screen celebration of cats is a musical number from the last animated feature Walt Disney approved before his death. Well-bred Duchess and her three kittens are being led back to Paris by cool cat Thomas O’Malley, after being cruelly dumped in the countryside by their evil butler. Before they reunite with their madam, O’Malley takes the feline family back to his “penthouse pad”, where his fellow alley cat friends are jamming away to jazz. The aristocatic clan ends up singing along to ‘Everybody Wants to Be a Cat’, creating a perfect display of cat characteristics: elegance and grace paired with chilled and careless vibes. “It isn’t Beethoven mama, but it sure bounces!”, meows one of the bow-tie-wearing kittens.

Lead musician Scat Cat was intended to be voiced by Louis Armstrong, who pulled out of the film for unknown reasons. Scatman Crothers saved the day with his impersonation of Satchmo; after all, the character was extensively modelled after Armstrong – from his physique to his trumpet-playing technique. 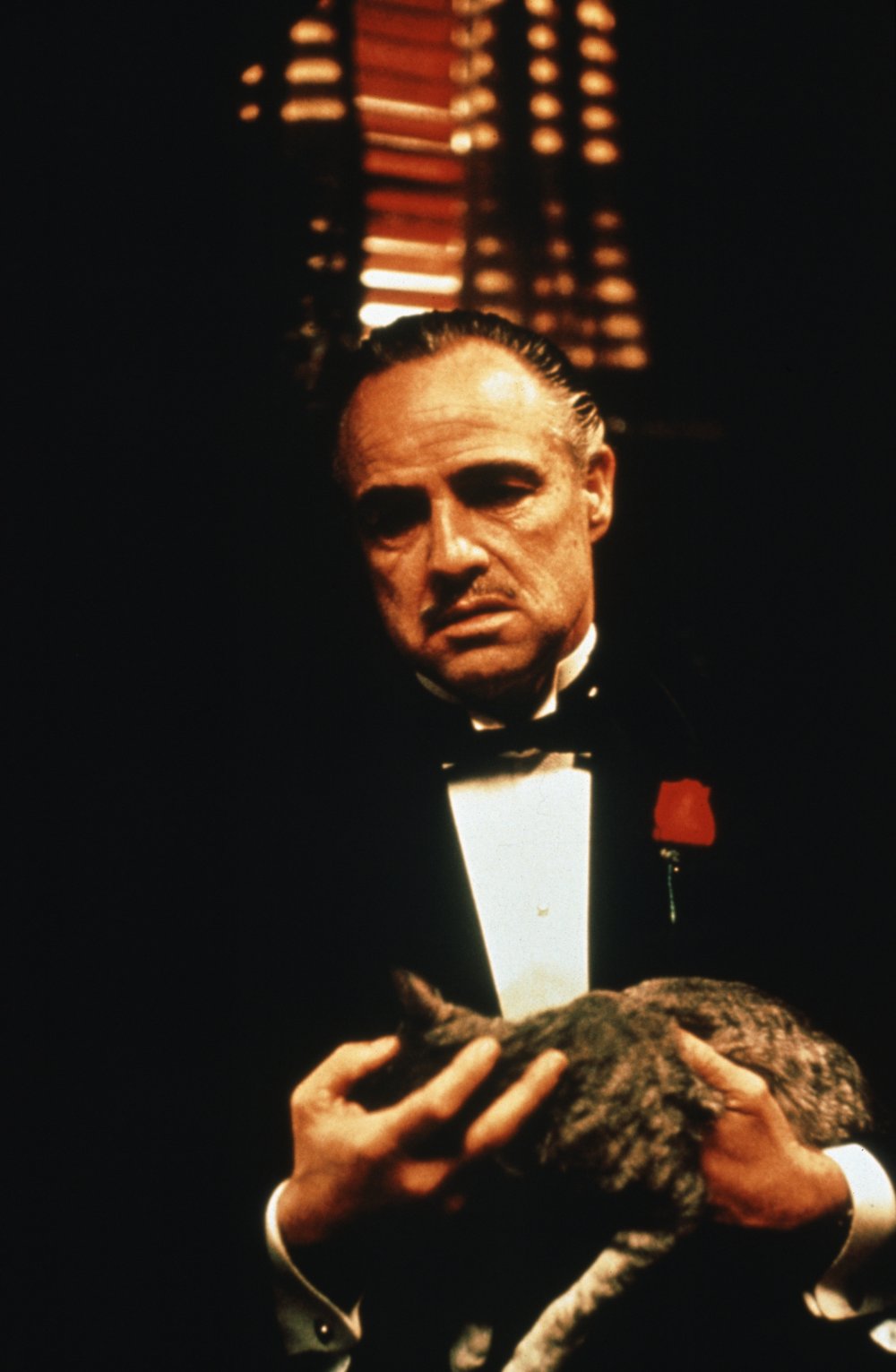 While most dark characters have their menace deliberately accentuated by the presence of a cat (think Bond villain Blofeld), the little tiger resting in Don Corleone’s lap in the opening scene of The Godfather was a spontaneous touch. The story goes that director Francis Ford Coppola spotted a cat frisking about the studio and placed it in Marlon Brando’s hands, aware of the actor’s affinity with animals.

The result is a rather brilliant contrast between a mafia lord discussing business and a gentle animal playing to his caresses. Legend has it that the two hit it off so well that the cat’s intense purring interfered with the dialogue, causing the sound team some extra work in postproduction. 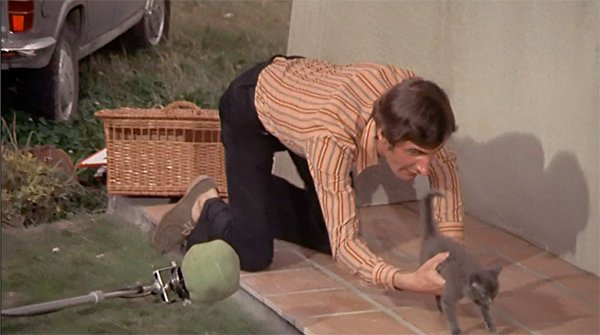 “We’ll shoot the scene when you find a cat that can act!”, says a frustrated François Truffaut, who plays Ferrand, a director facing the daily tribulations of making a film. In this scene, his team is struggling to coerce a kitten to drink from a breakfast tray. A cantankerous cat – who would have thought? The kitten is eventually replaced by a grown-up studio cat that hits the mark without fail, releasing a collective sigh of relief from cast and crew.

Truffaut, whose Day for Night won the Academy Award for best foreign language film, is here directly referencing a cat scene from his earlier film, La Peau douce (1964). “The director can’t help but say to himself that the film of the film would be a lot more lively than the film itself”, he explains of moments such as this. 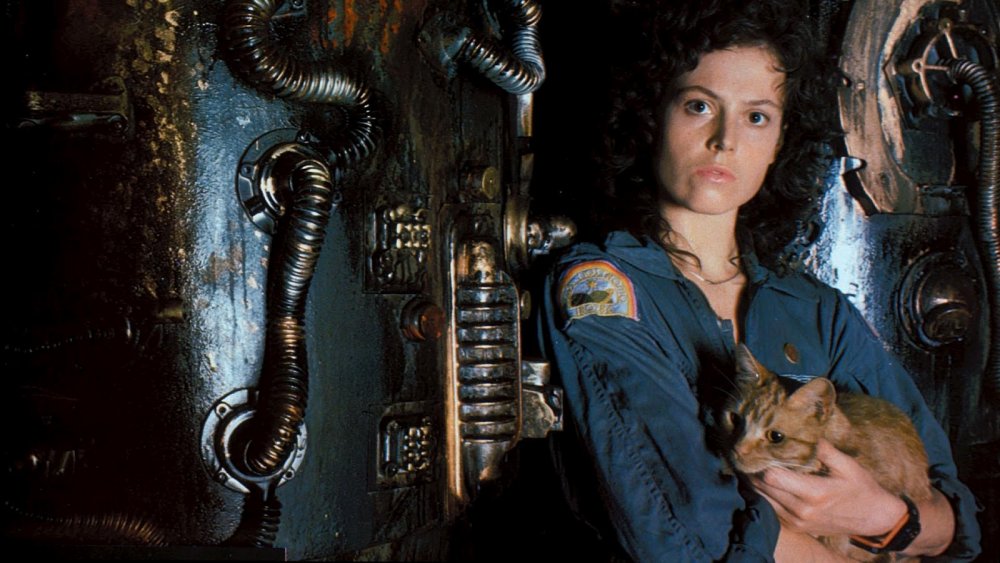 Jones, the ginger crew member of Nostromo, was nominally employed to eliminate rodents aboard the spaceship. But as film critic Anne Billson has stated, he deserves credit for accomplishing so much more. Among other qualities, she refers to him as a ‘catguffin’ (an empty reason for crew members to wander off on their own), a ‘catpanion’ (an excuse for Ripley to talk out loud without seeming insane) and a ‘catshock’ (shock value achieved through him suddenly jumping into a scene).

Fans of this multi-faceted character can read a short story Billson wrote called ‘My Day by Jones’, a reimagining of Alien through Jonesy’s perspective.