Film can teach us a lot, including how to teach. Here we take the register of classroom classics, from School of Rock to Etre et avoir. 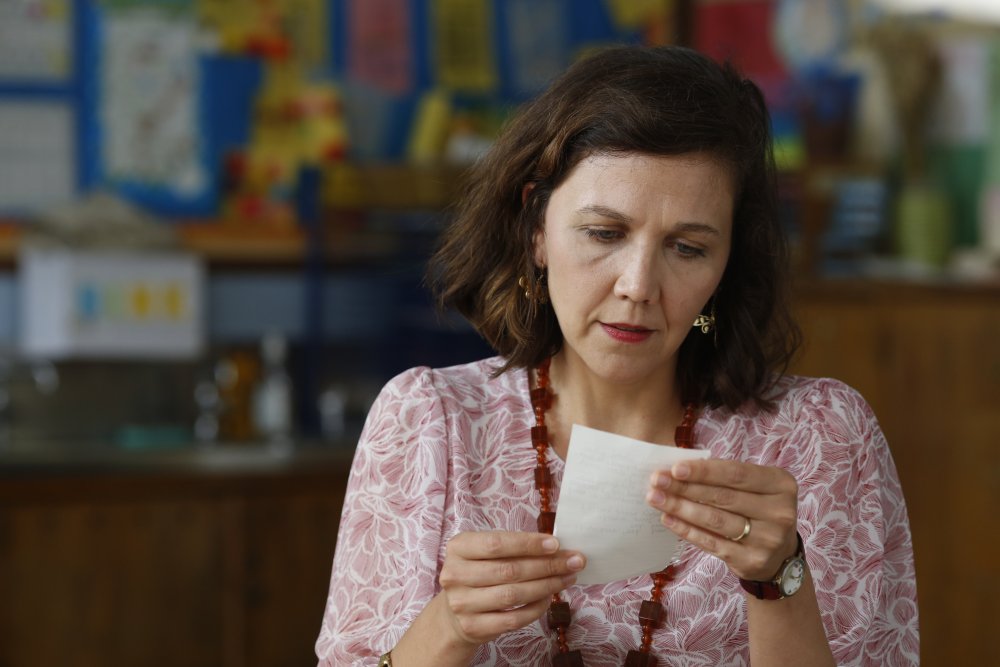 The Kindergarten Teacher is in cinemas from 8 March 2018

It’s not uncommon for little children starting school to occasionally and instinctively call their first teacher “Mummy” (or “Daddy”). For most kids, these adults are the first outside of their home with whom they’ll spend a large, emotionally intense part of their day. Attachments understandably grow strong. And many older students who go on to achieve success attribute much of their good fortune to a teacher who inspired or believed in them. Such positive, lasting effects are hugely powerful.

But what of the inverse reaction: the effect on the teachers themselves?

While the pupil/teacher relationship is obviously and necessarily an imbalanced one, it’s still a two-way relationship that can elicit profound reactions from the ‘senior’ side. Sarah Colangelo’s The Kindergarten Teacher, a remake of Nadav Lapid’s 2014 Israeli psychological drama of the same name, is a case in point. Lisa (Maggie Gyllenhaal, outstanding) is a veteran Staten Island teacher who also unsuccessfully attempts an evening poetry class. One day she hears one of her five-year-old kids, Jimmy, recite his own highly evocative poems.

Alarmed at his family’s lack of interest or encouragement, Lisa becomes determined to nurture this prodigy (even passing off his work as her own), leading her – and Jimmy – down a dangerous path. It’s a sharp, constantly surprising character study, which probes ideas of art, authorship, ambition and what can nurture or corrupt them. It’s also a piercing look at a teacher’s inner life and how it shapes relationships with students. Here are some other fascinating on-screen examples. 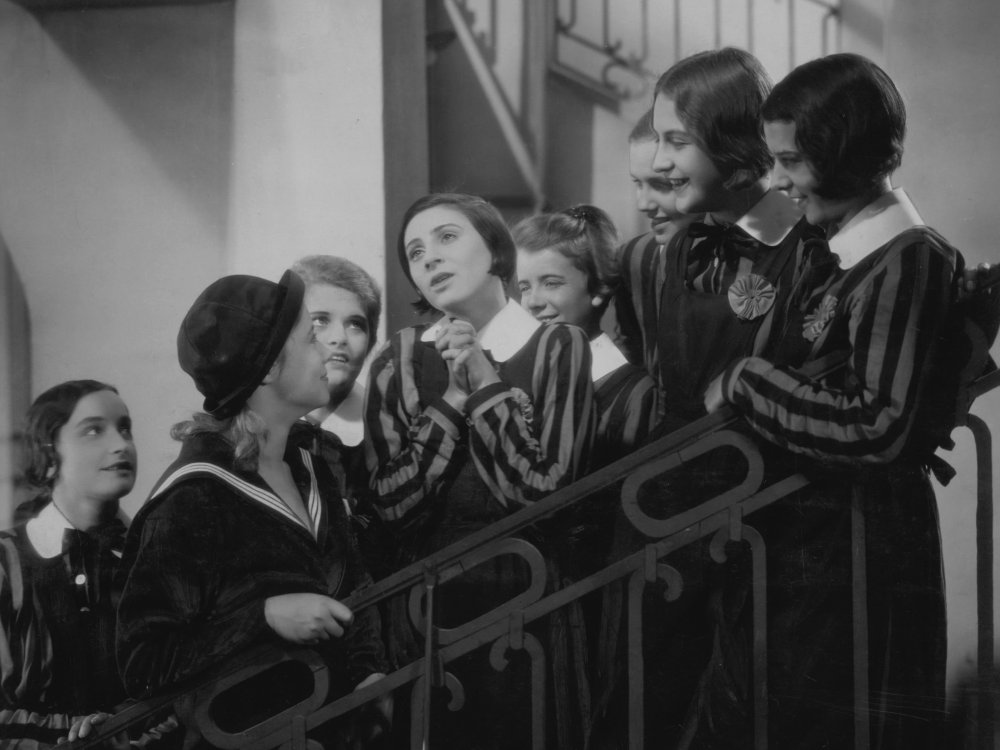 Girls in uniform and, ideally, as per the rigid strictures of their Prussian boarding school, uniformity. Such conformism is tested when the highly emotional Manuela (Hertha Thiele) arrives, mourning the loss of her mother. She seems to conflate feelings of abandonment with the stirrings of desire for beautiful and empathetic teacher Fräulein von Bernburg, who, to Manuela’s elation, appears to reciprocate. But a relationship under the gaze of similarly excitable young women, and the stern headmistress, carries serious consequences.

A landmark in German and queer cinema, Leontine Sagan’s (and ‘supervisor’ Carl Froelich’s) adaptation of Christa Winsloe’s play is startlingly upfront and unashamed in its sexuality. This in turn allows more intricate, perhaps even (self-)destructive interpretations, notably of Dorothea Wieck’s enigmatic, withholding Fräulein. Overall, though, it’s a tantalising, heartbreaking glimpse of anti-authoritarianism and what might have been had National Socialism not overrun the country soon after, and put Germany itself in uniform. 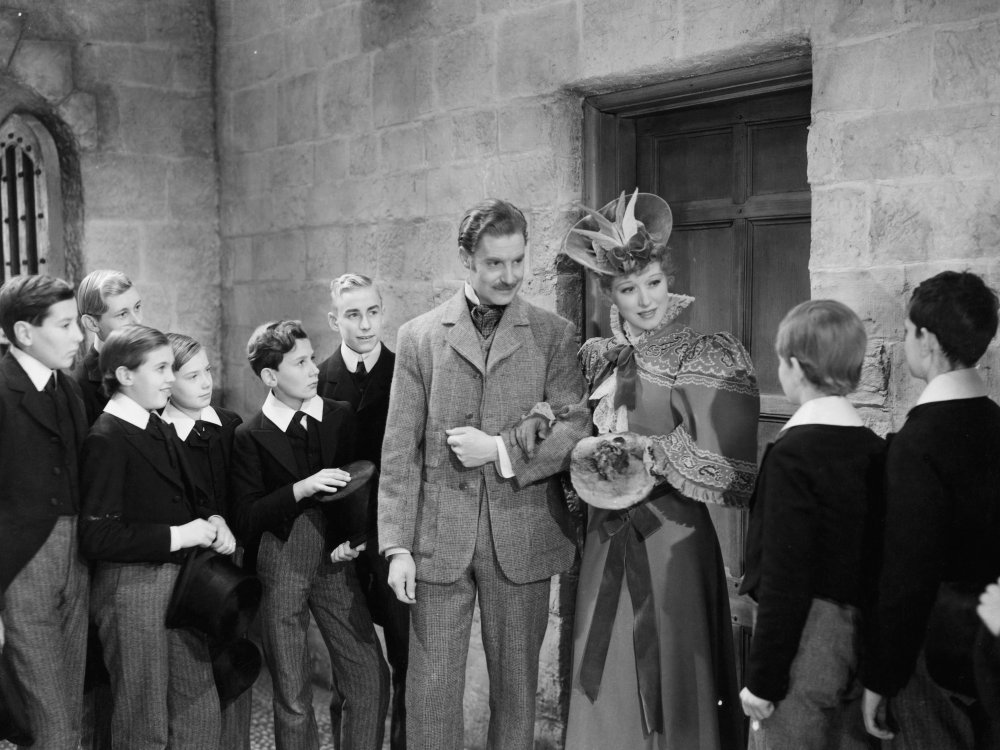 The daddy of all inspirational teacher movies (Blackboard Jungle, Dead Poets Society, Mr. Holland’s Opus, etc) follows the life and career of humble teacher and, later, childless widower and headmaster Mr Chipping. He arrives at elite Brookfield boarding school a callow, somewhat stiff apprentice, but by the time he’s a beloved elder statesman on his deathbed he can wistfully claim: “You said it was a pity I never had any children. But you’re wrong. I have! Thousands of ’em.”

James Hilton’s best-selling novella appeared a mere five years prior. Yet on its summer 1939 release, just weeks before the devastating spectre of the Second World War, Sam Wood’s consummate tearjerker already acted as a nostalgia plea to more benevolent, innocent times. Sure, it’s a sanitised character and world that’s easy to mock (and has been mercilessly lampooned on British TV comedies). Yet Robert Donat’s accomplished, makeup-heavy, Oscar-winning performance, and the eternal appeal to simpler home comforts and traditions, continues to withstand tougher tests than parody. 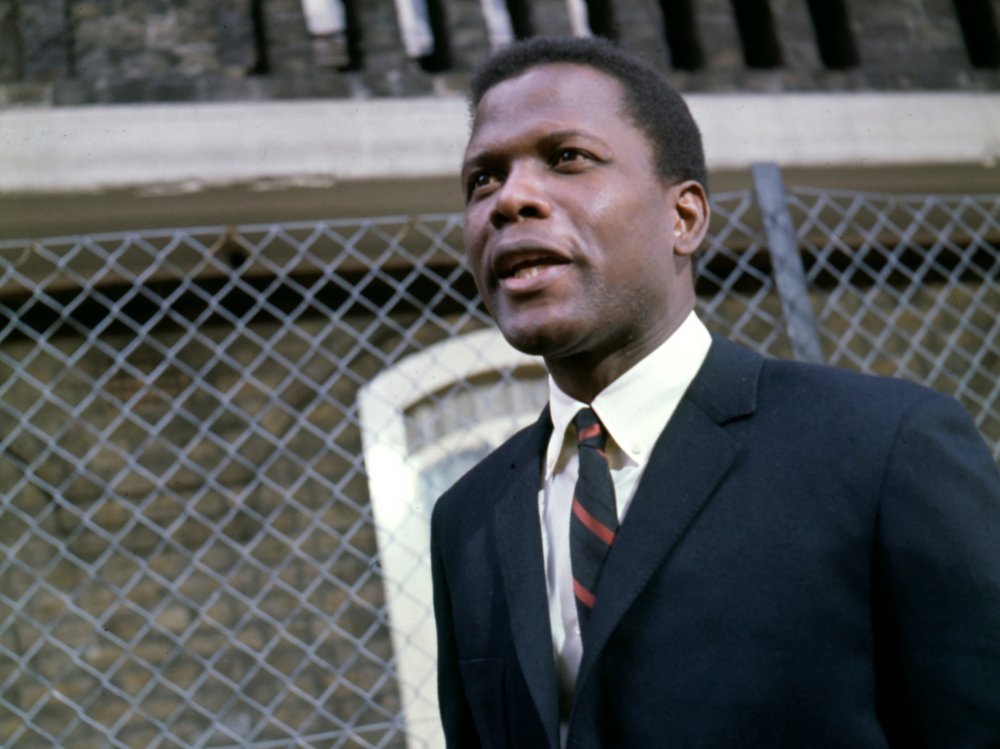 “So you’re the new lamb to the slaughter… or should I say ‘black sheep’?” It’s safe to say that the boisterous London Docks secondary school hasn’t met anyone like Sidney Poitier before. Then again, inner-city ruffians are an alien-like species to their new “British Guyanan” teacher too, getting even the great Sidney P to lose his cool at one point. That’s how you know London really was swinging in the 60s.

As the title, and its eponymous Lulu hit single, suggests though, mutual animosity soon turns to adoration; Sir’s dignity and empathy inevitably wins them round. Kicking off Poitier’s annus mirabilis (this, In the Heat of the Night and Guess Who’s Coming to Dinner released within a six-month period), it’s a formulaic but heartfelt snapshot of a particular time and persona. If Martin Luther King’s dream was shot down shortly after, on screen Poitier could make it appear oh so real. 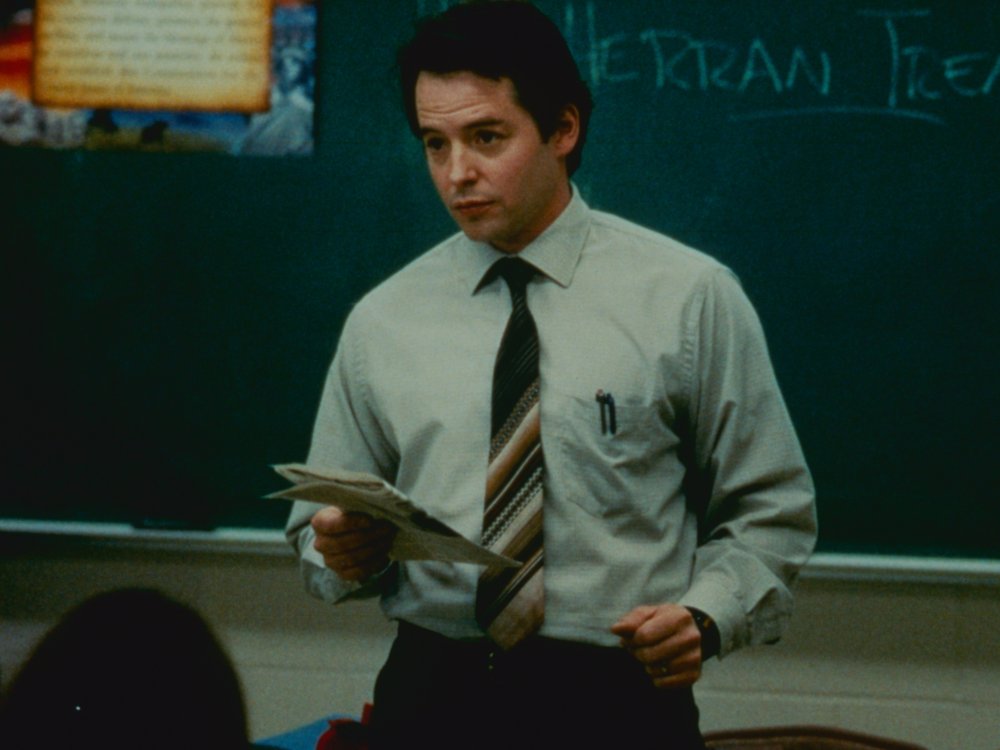 What type of teenager will stop at nothing to become high-school student body president? And what kind of teacher would wage an all-out campaign to thwart them? Alexander Payne’s terrific political satire pits Reese Witherspoon’s overachieving Tracy Flick against Matthew Broderick’s indignant Jim McAllister. McAllister’s outrage against Flick’s seemingly inevitable rise to power (particularly given her affair with, and the subsequent firing of, a fellow colleague) leads him to push injured, popular but dimwitted jock Paul to challenge Tracy. Then Paul’s embittered lesbian sister enters the fray, and all bets are off.

Payne and regular co-writer Jim Taylor’s acidic script is cynical as hell, but given our politics 20 years on, why not? Broderick’s hapless stooge, consumed by lust and hate, plays as dirty as his under-age nemesis. And Witherspoon’s career-best, against-type performance weaponises her Little Miss Perfect-ness into a (barely) controlled mania to Make Omaha Great Again. Pick Flick! 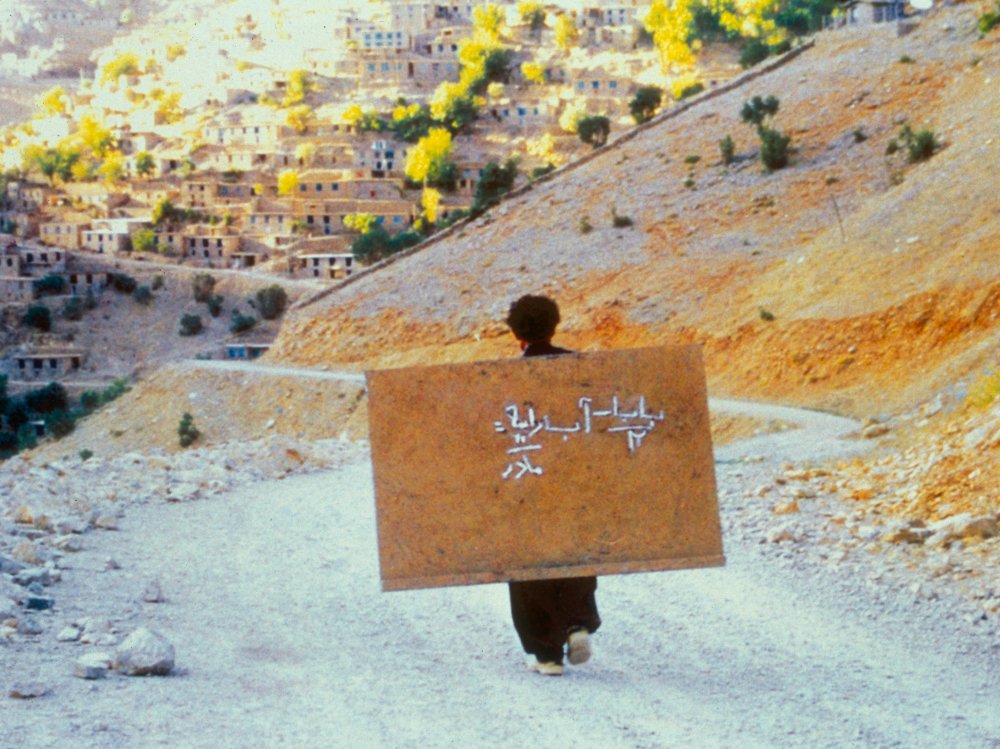 It’s a striking visual: a group of men wandering rugged mountains, large rectangular blackboards strapped to their backs like beasts of burden, or grounded birds with clunky wings. These are teachers, desperately in search of pupils in a volatile, unnamed region (likely Kurdistan near the Iran-Iraq border). But who needs book lessons, when the more critical signs to read are incoming airborne attacks? And who needs arithmetic, if the greater calculation is whether smuggling contraband might lead to future survival?

Samira Makhmalbaf was only 20 when she made this potent parable (written and edited by her father, veteran filmmaker Mohsen), but its sense of timelessness and, often, hopelessness, gives it a sense of ancient wisdom. Indeed, the only scholarly instruction that seems to endure in this hostile terrain is oral tradition storytelling. And the blackboards themselves find better use as camouflage, pallets, shields or stretchers; a stinging interpretation of “education, education, education”. 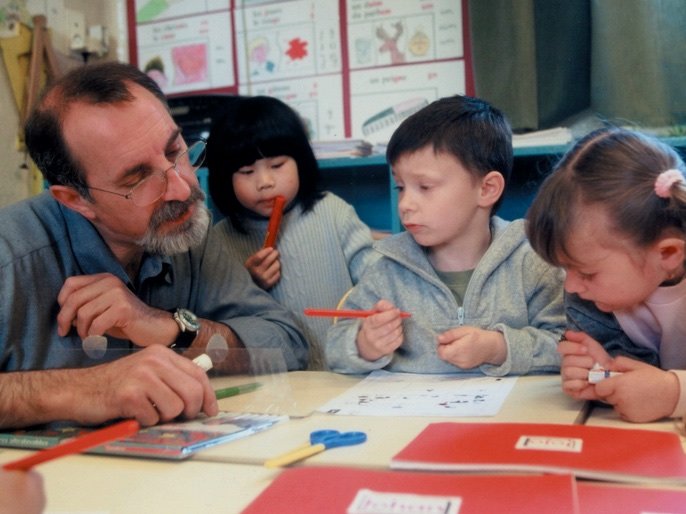 A small French rural village school, with one communal classroom, pupils aged from four to 11, and a single, middle-aged teacher, Georges Lopez. Over a six-month period, director Nicolas Philibert unobtrusively studied the daily events between its walls and beyond, capturing the gentle shifts in rhythms of the seasons, and also how Lopez assists the children with schoolwork and life’s bigger lessons. Throughout, the patient diligence and restrained sensitivity of teacher (and director) is a quiet, matter-of-fact marvel. “Everything that you put in,” Lopez says simply, “the children always return it.”

Unscripted and understated, but beautifully and economically honed down, Etre et avoir evinces a modern cinematic pleasure that’s rare, even nowadays, in documentary (whose flies-on-the-wall seem to flit and buzz incessantly): to experience a film that simply allows both its subjects and its audience to be in the moment. We’re lucky to have it. 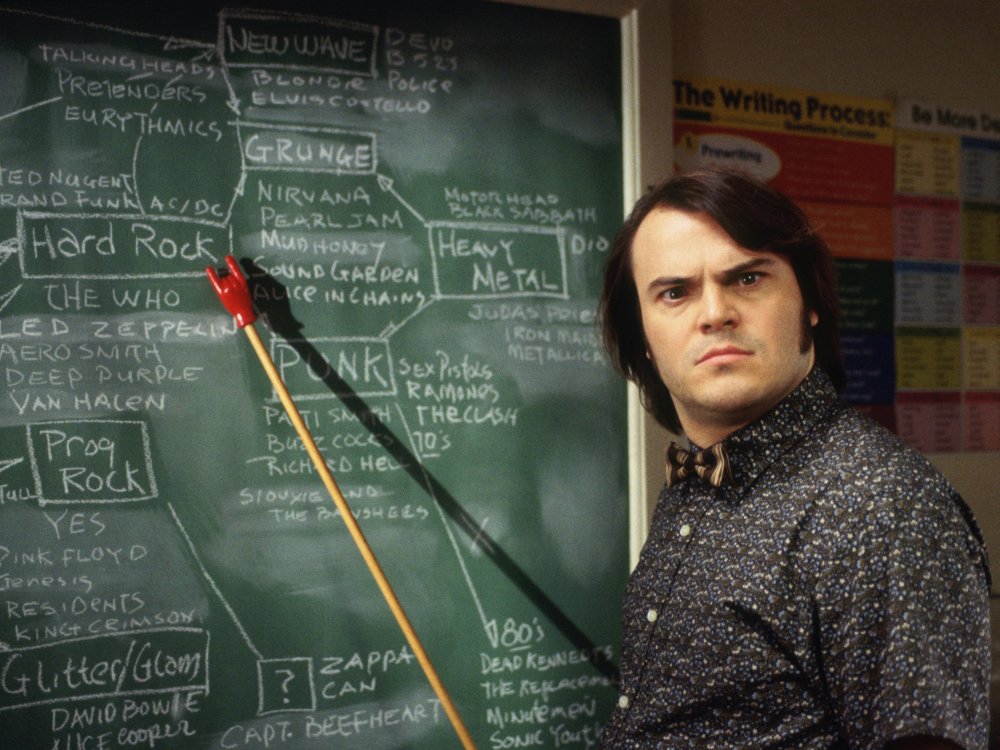 Dewey Finn (Jack Black) isn’t a teacher at all. He’s a broke, egotistical, wannabe-rocker man-child ejected from his own group, and about to be evicted by his best friend, substitute tutor Ned Schneebly (screenwriter Mike White). Intercepting his phone call, a desperate Dewey impersonates Ned for a prestigious private school’s temp job, only to discover his precocious young class has the makings of a killer rock outfit. And, if they can outwit blinkered parents and uptight principal – and erstwhile Stevie Nicks fan – Rosalie Mullins (Joan Cusack), these kids might just help him win Battle of the Bands after all.

Richard Linklater’s effervescent crowd-pleaser is pretty much perfect Hollywood entertainment, marshalled and amped by a fizzing Black’s tailor-made role. The kids aren’t stage school luvvies and can really play. And whatever your musical taste, it’s hard to resist a film whose anthem – and underlying lesson – sticks it to The Man. 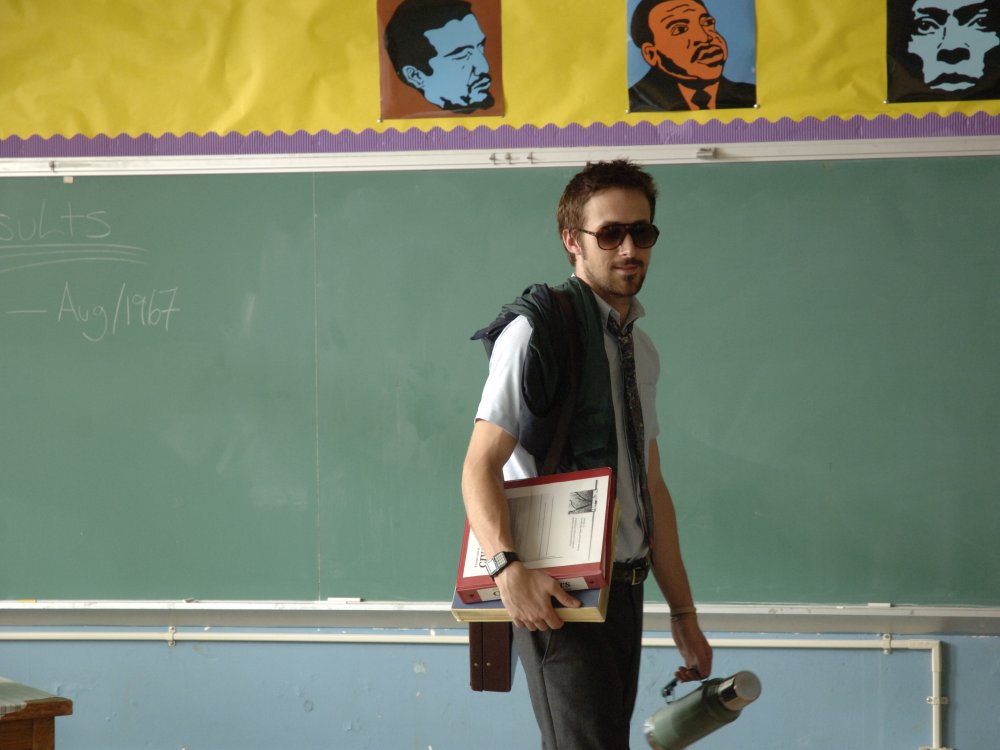 Inspirational teachers fixing tough kids is, as this list has already demonstrated, a popular sub-genre. Weaker entries make their idealistic instructors a little too ideal. Ryan Fleck and Anna Boden’s immaculate indie resists this temptation by showing us a charismatic, committed teacher as conflicted and messed up as his streetwise Brooklyn teenagers. As Dan Dunne (Ryan Gosling) battles his own drug addiction and unravelling life, the platonic, yet emotionally fraught relationship he forms with his student Drey (Shareeka Epps) might save them both.

Low-key and lived-in, it’s easy to underestimate Half Nelson’s skill and resonance. But it consistently swerves the clichés that cool teachers, gangs and even a charming drug dealer (Anthony Mackie) usually throw up, to get to the heart of its contrary characters. Gosling has never been better and thoroughly deserved his debut Oscar nomination. Fleck, Boden, Epps and Mackie are all in the same class. 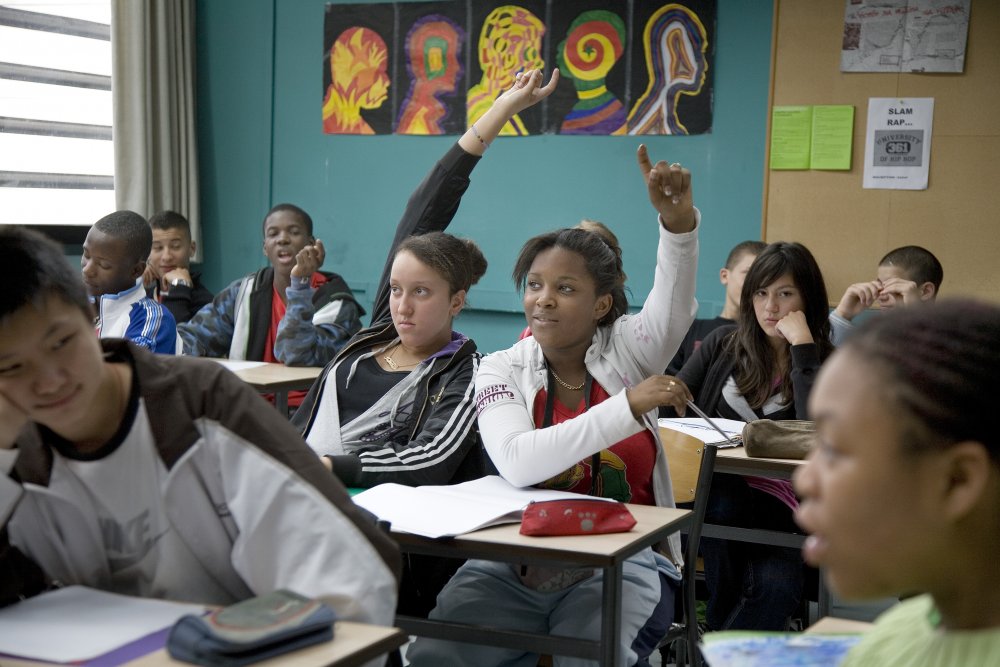 A Palme d’Or winner that’s been strangely, and too swiftly, dismissed a decade on, Laurent Cantet’s ensemble crackles with an authenticity few films can match. Based on the year-long memoir of French language teacher François Bégaudeau (here playing a fictionalised version of himself) at a multi-racial Parisian junior high, it presents a melting pot of ideas and language, conflict and community – messy, imperfect and therefore entirely true to (school) life.

Cantet regularly negotiates systems of governance and power, from corporate life (Time Out) to the tourist sex trade (Heading South), and their impact on those who opt into them. The foibles and failures of François and his students, to understand themselves and each other, are conveyed poignantly but utterly without sentiment. You’re left with the feeling that François himself would fail his own test on what he has learned during the year. Yet these are seriously tough questions, with no easy answers. 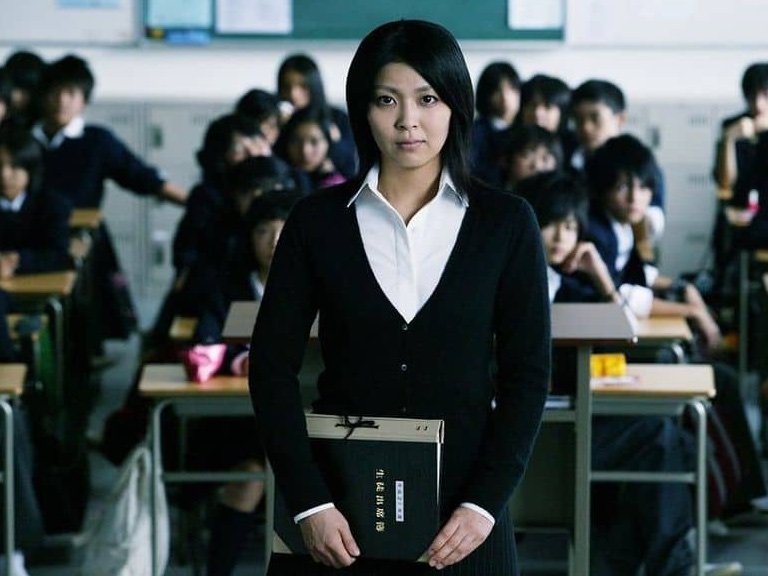 Teachers with unconventional methods are commonplace in movies, but infecting your students with HIV-contaminated blood in their milk cartons might be a little extreme even for a twisted Japanese revenge saga. Yet that’s the lesson Ms Moriguchi (Takako Matsu) doles out to induce remorse on two insolent teenage boys for killing her young daughter. And this is merely the opening act of Tetsuya Nakashima’s award-winner, based on a hit Kanae Minato novel.

Timelines shift, more juvenile death ensues, and by the end it’s unclear whether Ms Moriguchi has gone completely insane or is still hellbent on guiding her students “back to the right path”. Stacked with copious slow-motion and fancy camera angles, plus repeated use of a lesser-known Radiohead track (‘Last Flowers’), Nakashima’s heavily stylised vision feeds, yet somehow helps anaesthetise, the hothouse atmosphere. A pitiless critique on failing education systems or simply a deranged thriller that’s too cool for school? Discuss.