More films for the watchlist: Mustang and other notable movies that explore the sisterly bond. 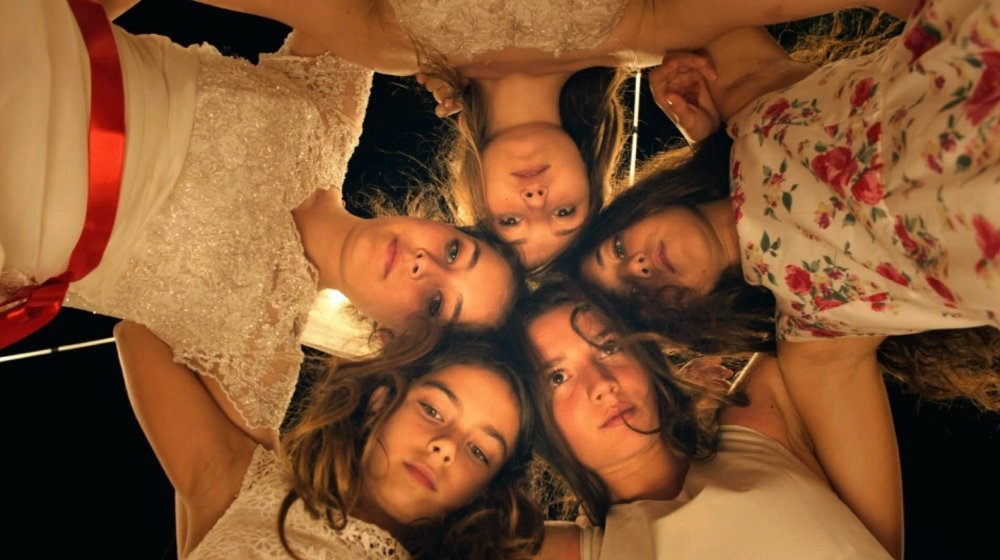 Five orphaned sisters flit about their gilded cage in the blistering dry heat of a Turkish summer, restless and suffocating like butterflies trapped underneath the heavy glass of a bell jar. Directed by Deniz Gamze Ergüven and co-written by Alice Winocour (Disorder), Mustang tells the tale of sisters Sonay, Selma, Ece, Nur and Lale from within the confines of their aunt and uncle’s house. The combination of their blossoming sexuality and natural boisterousness sends shockwaves of panic through their community, and so it is decided that each of the girls will be married off as soon as possible (though not if the girls themselves have anything to say about it).

It’s hard to watch a close clan of women severed by the strictures of patriarchy. However, though the film deals with a model of patriarchy specific to Turkish/Muslim culture, it’s worth noting that Mustang is a French production and filtered through the western perspectives of its writers/director. By choosing to highlight the archaic spectacle of arranged marriage, the film occasionally ends up flattening issues of cultural context to make its point.

Are the sisters in Mustang the victims of an intensely patriarchal culture or are they cursed? From the Lisbon sisters’ untimely deaths in The Virgin Suicides (1999) to the menstrual maladies that befall Ginger and Brigitte in Ginger Snaps (2000), there’s certainly no shortage of tragic narratives about ill-fated sisters in cinema. In some films (My Neighbour Totoro, Practical Magic) curses simply signal magic at play (or is it witchcraft?); in others, they provide an opportunity to enact sisterly solidarity (Frozen).

To toast Mustang’s UK release and to celebrate the five women at its heart, here are 10 excellent films that celebrate the good, the bad and the magic truths of sisterhood. 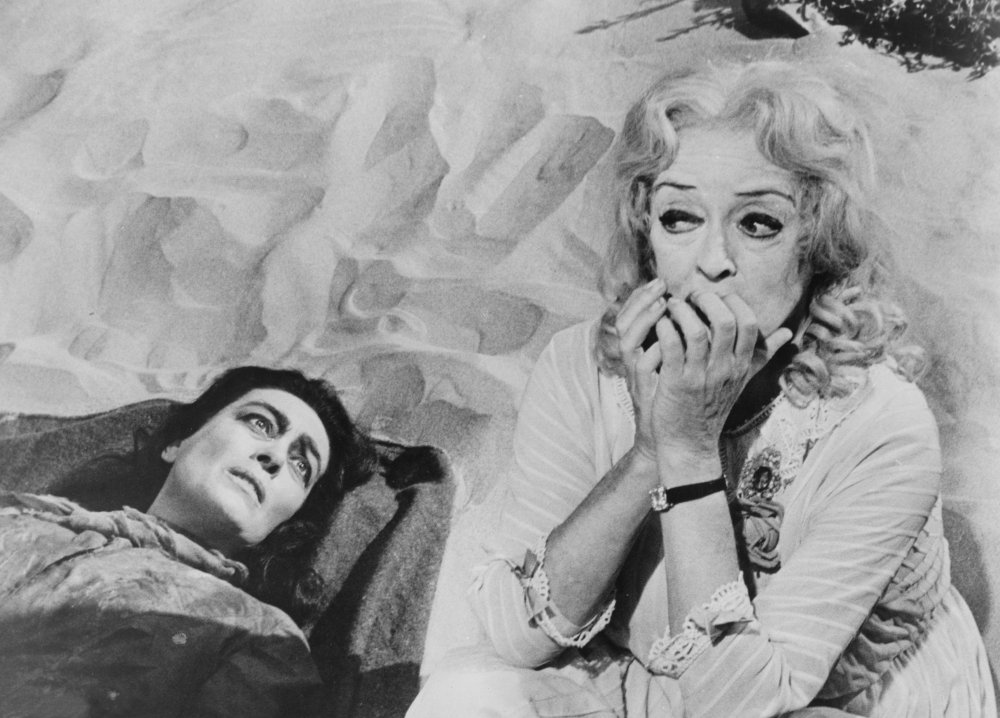 Robert Aldrich’s dark psychological thriller is considered a camp classic, though the comedy here is laced with cruelty. The bratty Baby Jane Hudson is a vaudeville child star; her reserved older sister Blanche an actress with more serious credentials – until she gets into a mysterious car accident that paralyses her from the waist down. Baby Jane is left as her primary carer, with the two of them almost totally alone in a crumbling, Sunset Blvd-style mansion.

The film settles in once both sisters are well past their prime, concerning itself with the psychological warfare Baby Jane (Bette Davis) enacts on her crippled sister (Joan Crawford). The bitterness between the pair is made all the more palpable by Aldrich’s casting choices, which played on the longstanding real-life rivalry between Davis and Crawford (as well as seeing two of Hollywood’s most glamorous leading ladies made up to look like haggard old women). 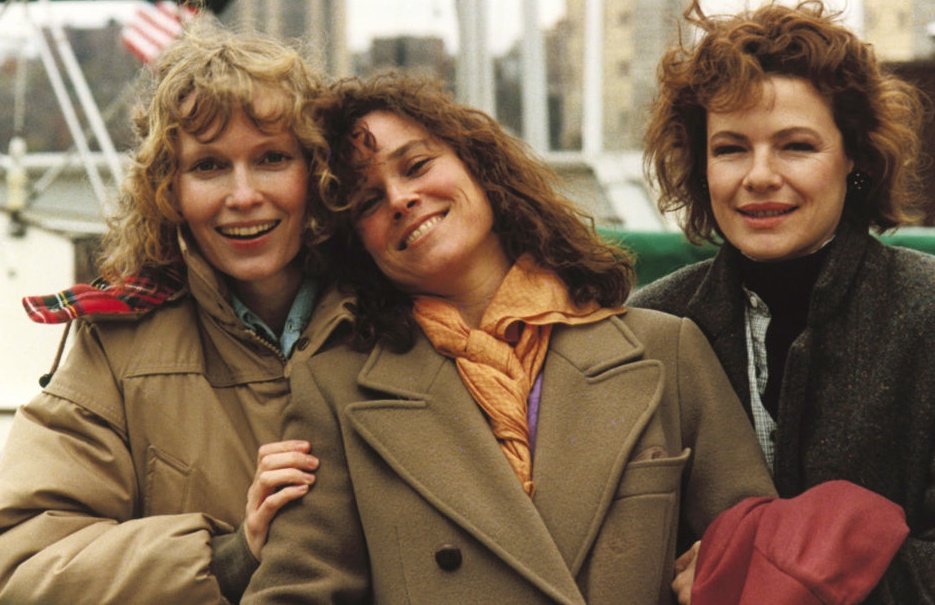 This warm romantic comedy is Woody Allen’s most human film by a clear country mile. The jokes are as barbed as ever, but the tone is gentler, and more optimistic than in most of Allen’s filmography. Starring Mia Farrow as the eponymous Hannah, and Barbara Hershey and Dianne Wiest as her respective sisters, it follows the ups and downs of their relationships with each other and with men. It feels satisfying to sit alongside these women as they exercise their neuroses by chewing the fat over big meals. Set in Allen’s beloved New York City in the autumn, Hannah and Her Sisters paints the highs and lows of family life with novelistic detail. 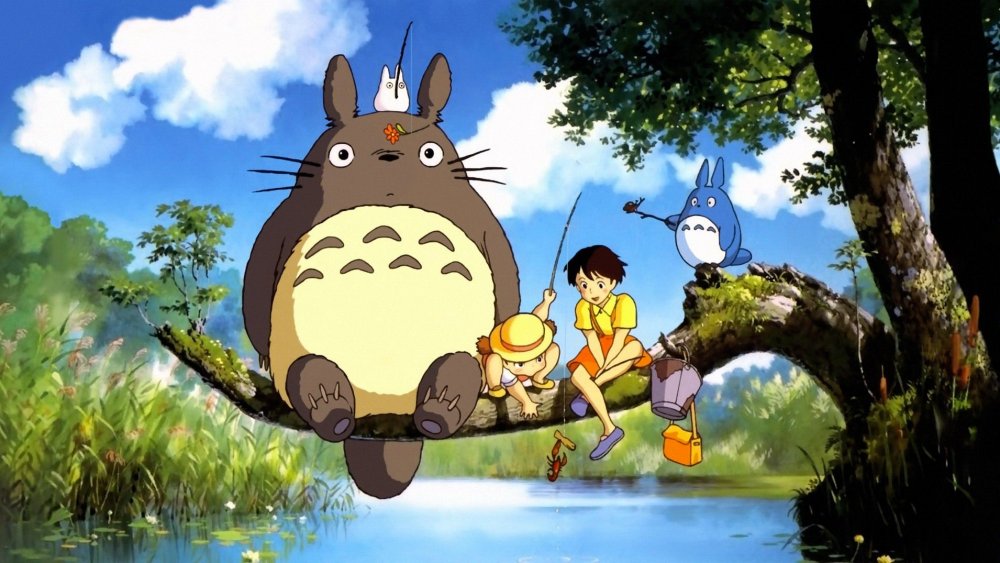 Satsuki and her four-year-old sister Mei have moved house with their father. Busying themselves with making the house fit for their sick mother’s return from the hospital, the girls enjoy exploring the soot-filled nooks and crannies of their new abode – as well as the magical forest that borders their back garden.

In this forest live the titular totoros – fat, benign bunny-like beings only visible to the girls, alongside other mythical creatures (including Catbus, a flying cat with 12 legs and headlights for eyes) imagined by Hayao Miyazaki and rendered in gorgeous, hand-drawn watercolours. The sisters squabble and spat (as sisters are wont to do), but lovingly so, in this beloved early Studio Ghibli production. 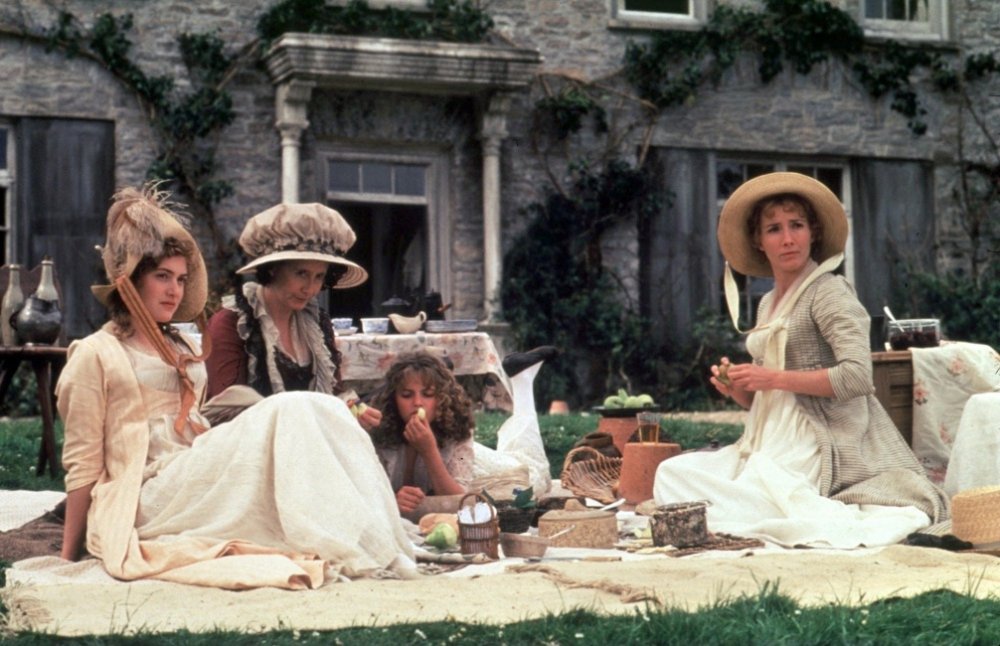 Rain-soaked epiphanies and romantic vistas of the English countryside abound in Ang Lee’s adaptation of Jane Austen’s classic 1811 novel. Austen is best known for her witty commentaries on love, money and social class, though sisterly tensions crop up throughout her novels – from Pride and Prejudice’s clan of eligible bachelorettes to the three sisters at the heart of Mansfield Park. In Sense and Sensibility, sense and sensibility are the Dashwood sisters (played by Emma Thompson and Kate Winslet respectively), two women who fall into unexpected financial ruin. Thompson, who wrote the Oscar-winning screenplay, adds her own feminist flair to Austen’s story by making explicit the problems faced by women who neither worked nor inherited their own money. 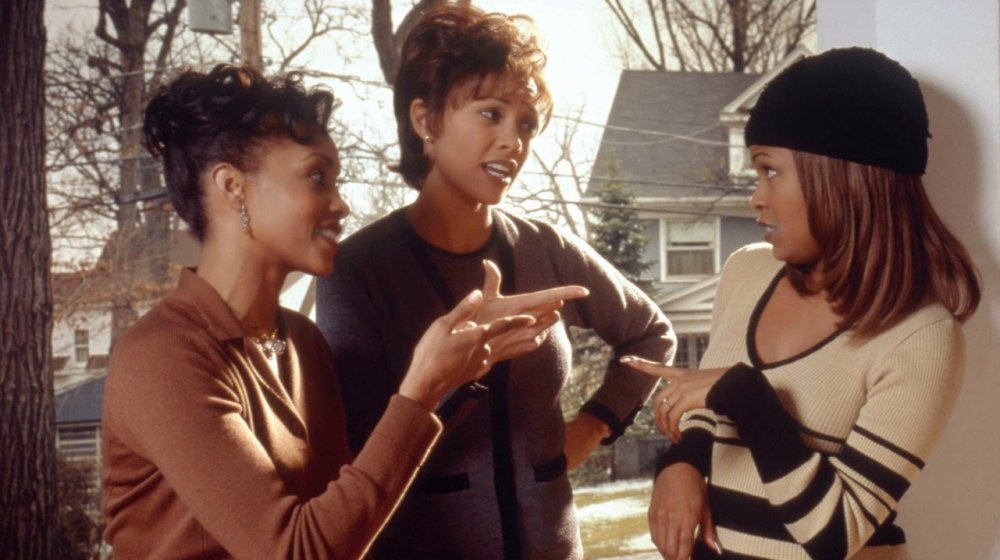 Tillman Jr centres the personal and professional conundrums these women face, from work dilemmas to middling minxes that threaten to derail the family’s close-knit bond, filtering their middle-class concerns through the eyes of Maxine’s young son Ahmad (Brandon Hammond). With Big Mama on her deathbed for the majority of the film, it occasionally finds itself slipping into the realm of melodrama, but that’s no bad thing (nor is it inaccurate, as anyone from a big family will confirm). 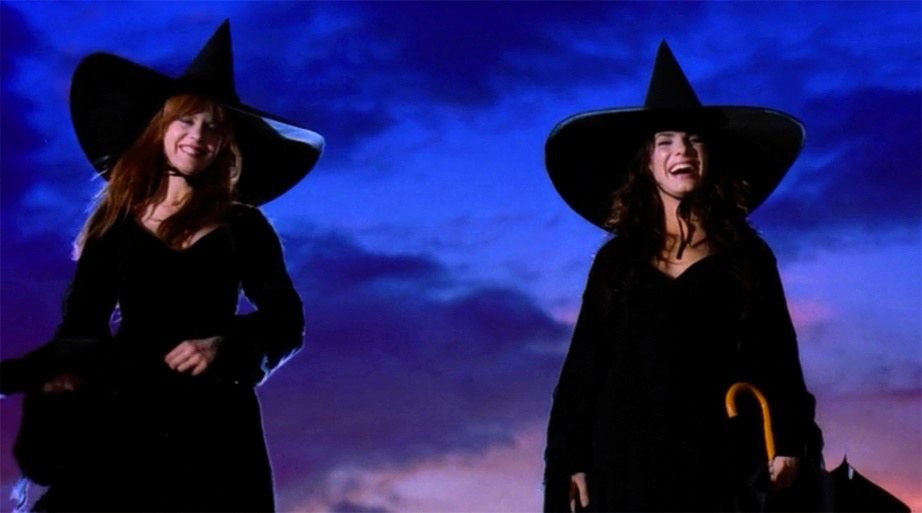 Sandra Bullock and Nicole Kidman are witches – and estranged sisters – in this underrated romantic comedy. With all potential love interests doomed to die, Sally (a typically uptight Bullock) resigns herself to a lonely life of solitude, busying herself with maternal duties and rescuing her sister Gillian (Kidman, replete with knee-high boots and a saucy snake tattoo) from an abusive, redneck boyfriend. Sure, it’s silly – especially the scene that sees Bullock and Kidman dancing goofily with their aunts (played by Dianne Wiest and Stockard Channing, no less) while drunk on “midnight margaritas” to Harry Nilsson’s 1971 hit ‘Coconut’. But it’s charming too, especially in its suggestion that a life without men doesn’t have to be totally lonely. 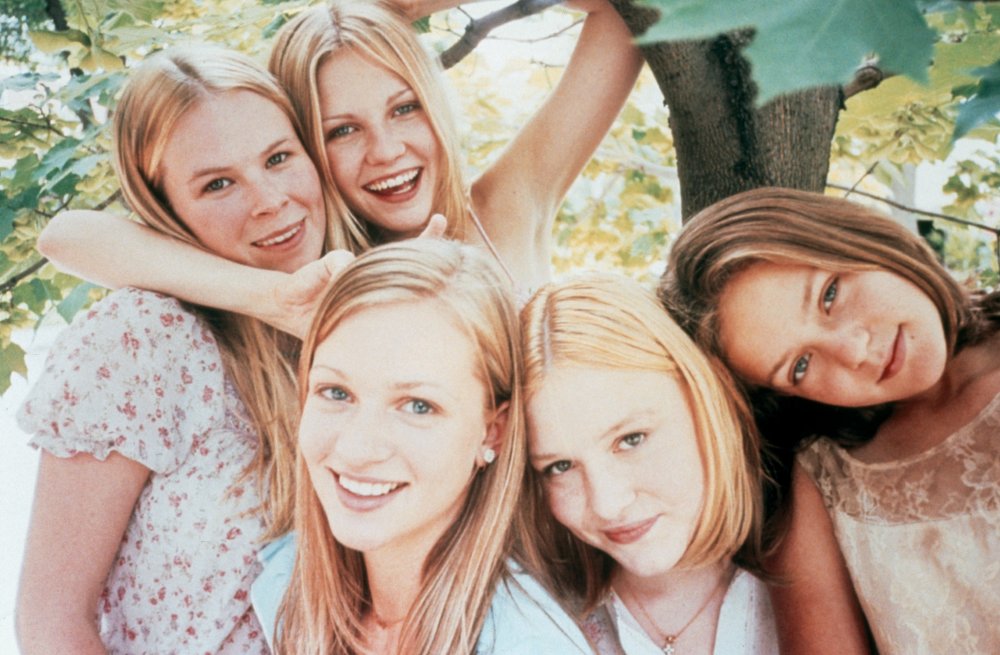 A visual reference for hipster teenagers everywhere, Sofia Coppola’s dreamy adaptation of Jeffrey Eugenides’ bestselling novel manages the rare feat of improving upon its source material. The Lisbon sisters are a quintet of spellbindingly beautiful blondes in Picnic at Hanging Rock-style white dresses, whose protective parents stop them from listening to rock music and dating boys, eventually driving them to their individual suicides. The sisters rebel against the way they are perceived at home and at school, taking solace in the fact that they at least have each other.

Set against the backdrop of small-town 70s Americana and shot by Edward Lachman, it’s as much a period piece as Coppola’s later Marie Antoinette (2006). What’s fun on a rewatch of her directorial debut is noticing the force of her singular vision, from its use of pop music to its ethereal, softly lit cinematography and music video-style montages. 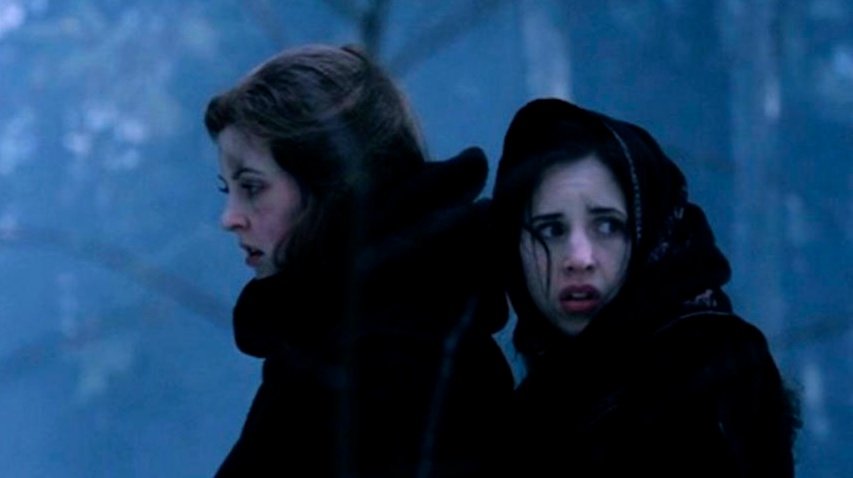 This lo-fi Canadian feature is equal parts teen movie, body horror genre exercise and feminist treatise. Sixteen-year-old Ginger (Katharine Isabelle) and her younger sister Brigitte (Emily Perkins) are emo outcasts at their school. When Ginger gets her period (Carrie-style), it’s accompanied by hair growth, backache and bloodthirsty horniness – in other words, it’s pretty much the same as being a werewolf.

In Ginger Snaps, screenwriter Karen Walton explores what happens when growing up means growing apart – and when it doesn’t. Ginger leaves her late-blooming sister behind as she enters the wild world of puberty, but it’s Brigitte who is the film’s unsung heroine, casting aside her natural reserve and rescuing her sibling in an act of sisterly solidarity. 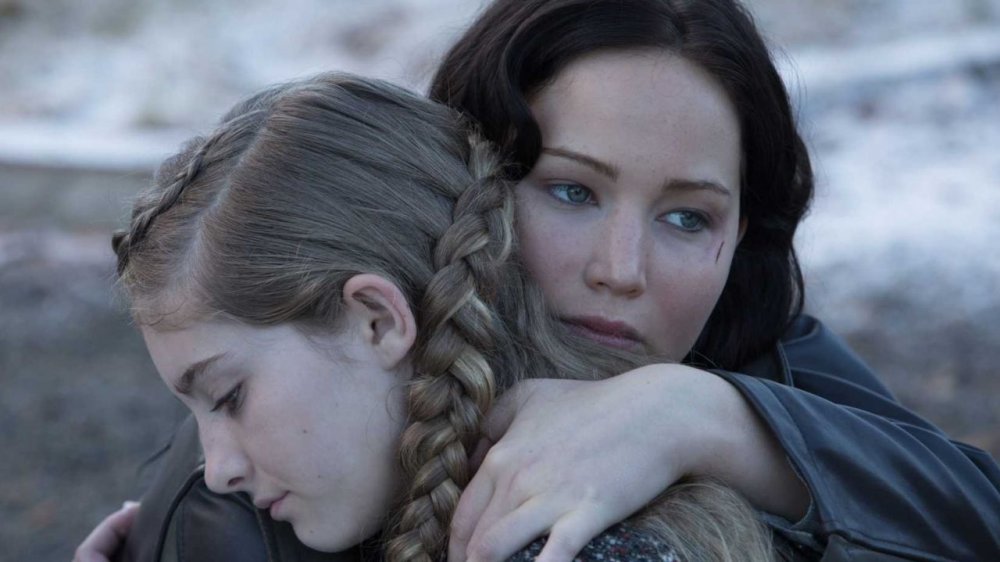 The first instalment of the dystopian drama sets a chain of events in motion. Based on Suzanne Collins’ wildly popular young adult novels, the entire series is predicated on Katniss’ (Jennifer Lawrence) determination to volunteer as tribute in place of her sister Prim. This isn’t the first time Lawrence has assumed the role of sensible big sister on the big screen (her breakout role in the unshowy Winter’s Bone saw her charged with similar on-screen responsibilities). However, the scale and scope of the Hunger Games universe gives Lawrence the opportunity to sink into the psyche of a single-minded survivor who is prepared to sacrifice her life for her sister – but is determined to return home safely. 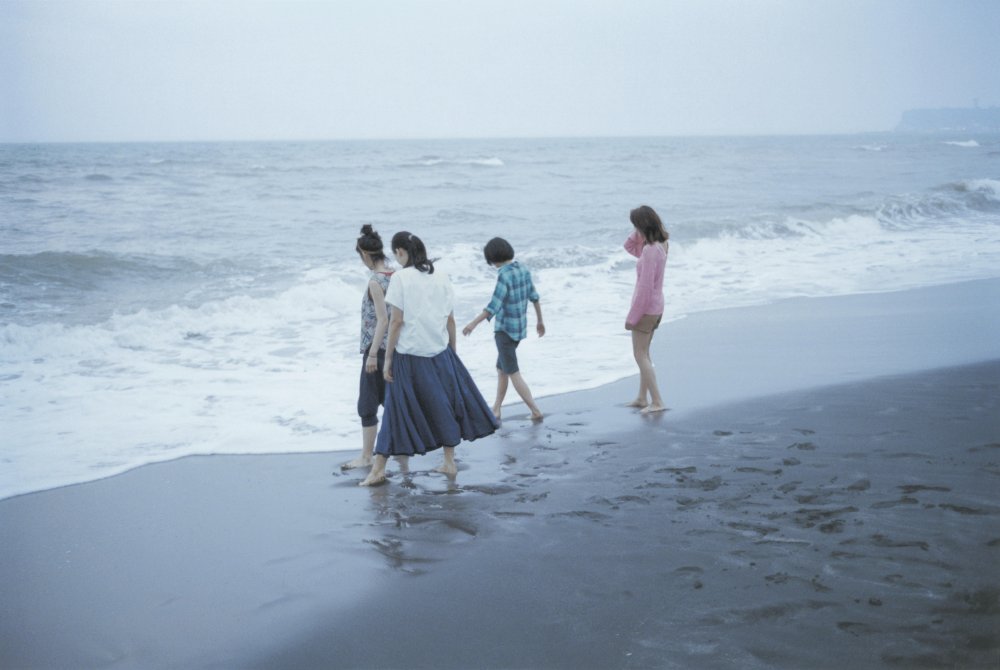 Sisters Sachi (Haruka Ayase), Yoshi (Masami Nagasawa) and Chika (Kaho) live together in their late grandmother’s house in Kamakura, leading their separate lives with relative ease. However, when their estranged father passes away, they come into contact with Suzu (Suzu Hirose), their 15-year-old half-sister by the woman for whom their father left their mother. Charmed by Suzu’s smarts and sweet nature, they invite her to live with them, teaching her to eat, drink, live and love like one of their own. In one lovely scene, the girls crowd a sleepy Suzu after she’s had few too many glasses of plum wine, admiring the way her ears look like Sachi’s. Hirokazu Koreeda’s tender-hearted family drama is rich with detail, lingering on the ways the women help each other move through grief, guilt and heartbreak.

Related to 10 great films about sisters